Donald Cochran, Director of Sales for Northwood Manufacturing, announces an all-new 2014 Wolf Creek model and gives us the inside scoop on Wolf Creek’s 2014 truck camper updates.

After adjusting the frame, Northwood adjusted just about every design element and material variable in the Wolf Creek line to save a few pounds here, and a little cost there.  Cabinetry became flat panel versus raised.  Exterior access doors went from one inch to a half inch.  Refrigerators went from five or six cubic feet to three, and so on down the line.

Nearly three years later, Northwood is announcing the most aggressive set of changes to Wolf Creek since the brand’s introduction.  To get the low down on the 2014 Wolf Creek line and updates, we talked to Donald Cochran, Director of Sales for Northwood Manufacturing.

Above: 2014 Wolf Creek campers ready to be shipped at Northwood Manufacturing

TCM: Are there any Wolf Creek models being discontinued or announced for 2014?

Donald: The Wolf Creek line has stayed pretty much the same since its introduction in 2011, but we’re making some significant changes and updates for 2014.

Of course we’ll give Truck Camper Magazine the exclusive announcement including floor plan, photography, and specifications as soon as the Wolf Creek 840 is ready.

TCM: Can you give us a hint about this new camper?

Donald: We’re always talking to our customers and dealers about what they want in our Wolf Creek truck camper line.  Specifically, we want to know what features and options customers are looking for.  The 840 is a direct result of these conversations.  We’re confident that it’s going to be a big hit.

TCM: That’s it?  Any specifics?

Donald: It’s an eight-foot non-slide hard-side truck camper with a mid wet bath.  In our research, this is the floor plan that repeatedly came up over and over again as what our customers wanted to see next in the Wolf Creek line up.  Production is putting the finishing touches on the prototype as we speak.  It’s that hot off the presses! 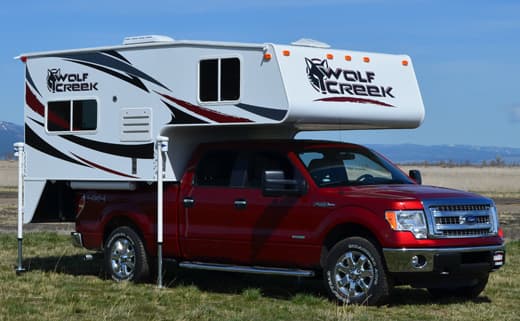 TCM: We can’t wait to see and hear more.  Tell us about Northwood’s 2014 updates to the Wolf Creek line.

Donald: The first change everyone is going to notice are the bold new graphics and Wolf Creek logo on the exterior.  Our team has given the 2014 Wolf Creek line a significant contemporary look. 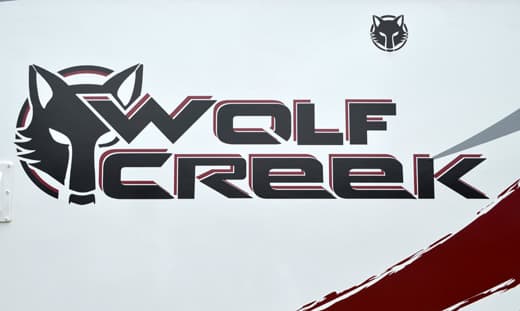 The lone wolf logo embodies Wolf Creek’s “Roam Where You Dare” tagline.  I think our Wolf Creek customers are going to love it. 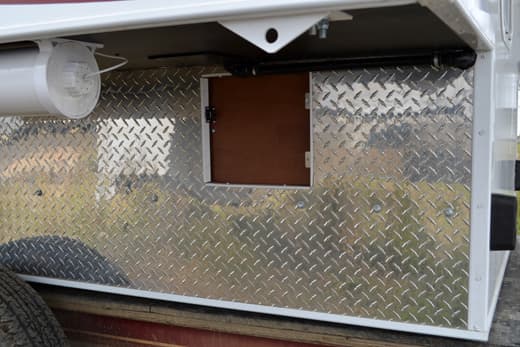 TCM: Are there any exterior material changes for the 2014 Wolf Creek line?

This is an area that can sometimes make contact with the truck during loading and unloading.  The diamond plate protects the camper and matches the bold new graphics. 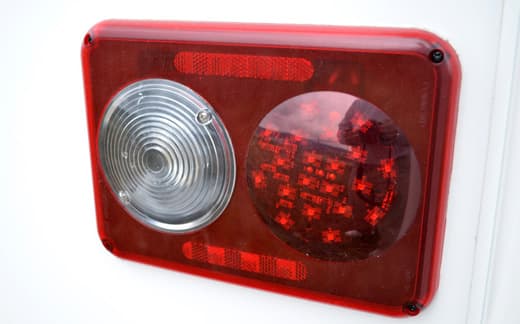 Above: All exterior 2014 Wolf Creek lighting is LED

TCM: Northwood upgraded Arctic Fox to all-LED interior and exterior utility lighting for 2014.  Did Wolf Creek also get this upgrade?

Donald: Every light on the exterior of Wolf Creek campers are LED.  On the interior, Wolf Creek has all-LED utility lighting for 2014.  In fact all Northwood products, across the board, are now all-LED utility lighting.  That’s part of our Absolute Northwood concept.  All the traditional, utility-style lights are the double and single pancake lights as well as the puck lights.  Decorative lights, or atmosphere lights include the reading lights, sconce lights and designer dinette lights.  Our research shows that customers still prefer the warmer glow of a traditional incandescent light in these applications. 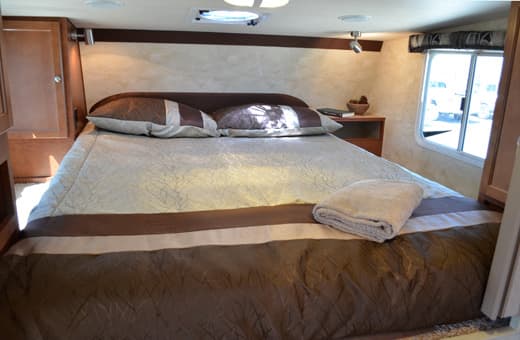 Above: The cabover in the 2014 Wolf Creek 850 has LED utility lighting and decorative lighting

TCM: Are the LED lights and fixtures in the Wolf Creek line the same as what’s installed on the Arctic Fox line?

The energy savings from using all-LED lighting is very impressive and will be a big plus for our customers.  In some cases, LED lights use about one-tenth the amp draw as the traditional incandescents they replace.  We are very excited about the change to all-LED lighting in 2014.  It’s an important update our customers are sure to appreciate long after the sale. 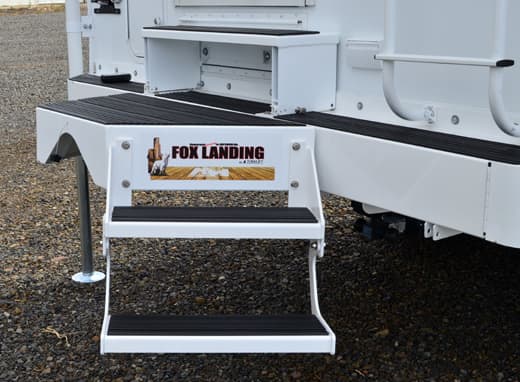 Above: The Fox Landing is now available on 2014 Wolf Creek campers

Another big update for 2014 is the availability of the Fox Landing as an option for Wolf Creek campers.  It’s exactly the same Fox Landing that’s available on Arctic Fox campers. 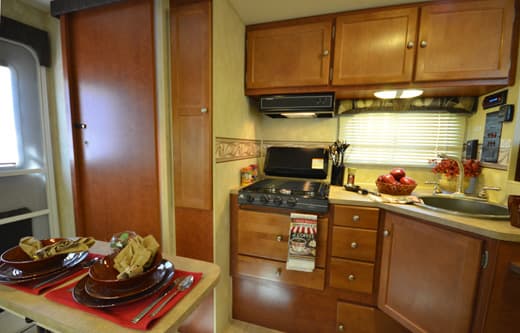 Above: The Command Center systems monitor is on the right side of the galley in the 2014 Wolf Creek 850

TCM: We personally know Arctic Fox truck camper owners who decided to buy an Arctic Fox partially because they wanted the Fox Landing.  Is the new Command Center systems monitor in the Wolf Creek line the same that’s been announced for the Arctic Fox line? 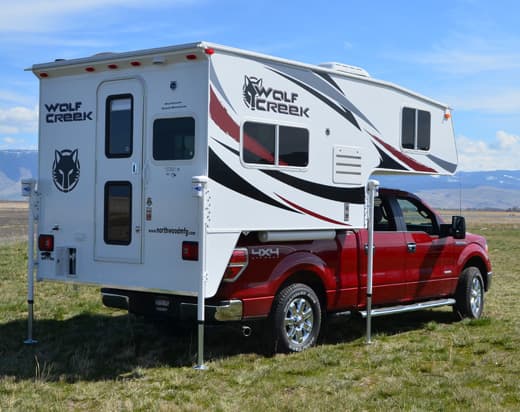 Donald: Corona-treatment is another level of quality control we have added to our lamination process to ensure the long-term strength and longevity of the lamination bond on all of our RV products.

Technically, corona-treatment prepares the surface of the fiberglass using low temperature corona discharge plasma that modifies the surface for improved and increased adhesion.

We have added corona-treatment to several existing layers of lamination quality control including the rigorous maintenance of humidity levels in our separate lamination building.  We take all levels of quality very seriously at Northwood.

Above: The new Northwood Manufacturing fabrics for 2014

TCM: Having seen your lamination and quality control teams in action, we can attest to that.  Are there any new Wolf Creek interior fabrics for 2014?

Donald: For 2014 we have all-new fabrics for Wolf Creek.  They are Shimmering Sands, Crystal Onyx, Early Autumn, and Flagstone Mosaic.  They share the same decors with our Arctic Fox campers. 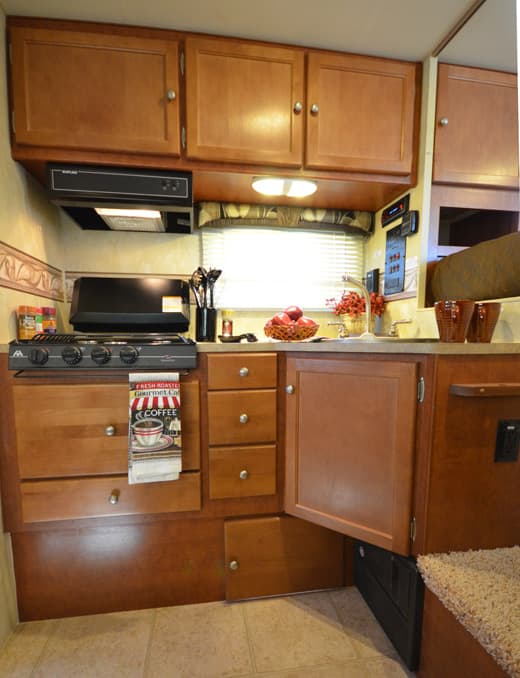 TCM: Any updates to the Wolf Creek carpeting, counter tops, and cabinetry for 2014?

Donald: The only change there is the elimination of the slider overhead cabinets in favor of cabinet doors.  We think the cabinet doors are more user friendly.

All Northwood products, including Wolf Creek, use the same interior cabinetry color; Gallery Wood.  It’s a warm chocolate tone with a nice grain.  We use brushed nickel hardware and accents. 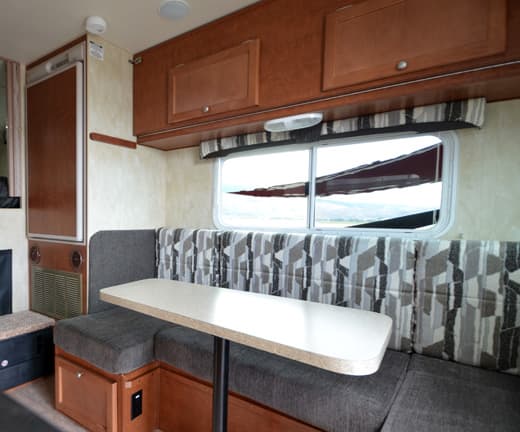 Above: The wood paneled refrigerator and U-shaped dinette in Shimmering Sands in a 2014 Wolf Creek 850

The Wolf Creeks have black enamel ranges and appliances and wood paneling on the refrigerator. 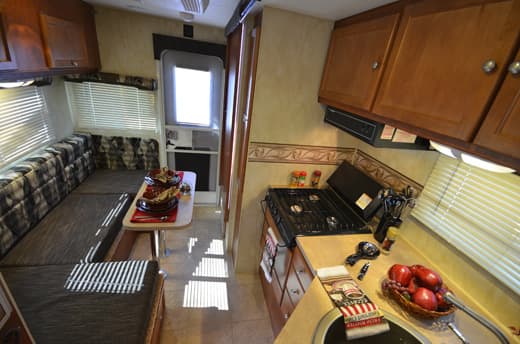 TCM: Are there any other updates to Wolf Creek campers for 2014?

Even though the Wolf Creek truck camper line is a lower-cost and lighter-weight truck camper product compared to our Arctic Fox line, it’s important to remember that Wolf Creek is built on the same production line, with the same Absolute Northwood quality standards.

Above: The roller bearing drawer guides are part of the Absolute Northwood standard

Donald: Absolute Northwood is a quality standard that is applied to every RV product produced at Northwood Manufacturing.  For example, when it became apparent that customers wanted LED lighting, we went to all-LED utility lighting for 2014 as part of our Absolute Northwood standard across the board, Wolf Creek included.  Energy savings is a factor for all of our customers.

TCM: How do you mark center of gravity and measure the weights of your campers?

Donald: The center of gravity is determined manually by literally finding the tipping point on each model.  That’s done as part of final finishing on the production line.

While every camper is not weighed individually, we weigh a representative unit and mark the campers with that weight.  We encourage customers to add the weight of the options on their camper to arrive at the accurate weight for a specific unit. 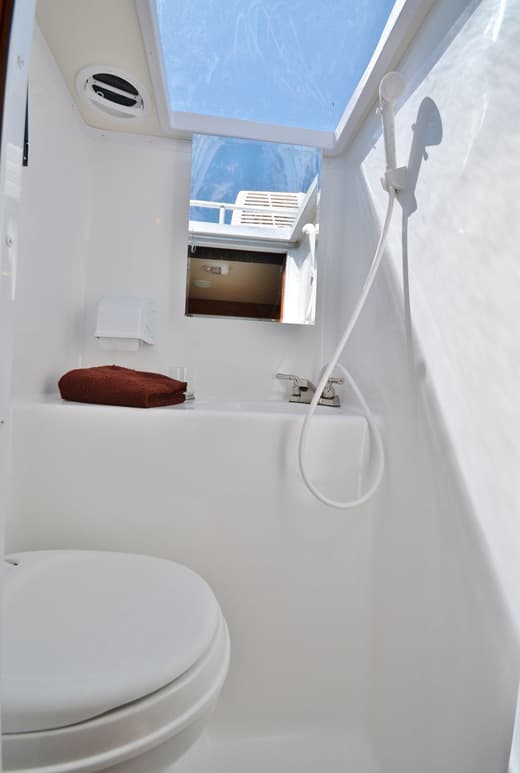 TCM: Any plans to make a Wolf Creek slide-out?

The soon to be released 840 is sure to create a lot of excitement.  It’s a really smart design and an excellent balance of features, space, and weight.  The 840 is on our assembly line as we speak and will soon debut at Pomona and on Truck Camper Magazine.