For 2017, Northwood announces the return of the Arctic Fox 865 and debuts cathedral arch ceiling construction, two new interior decors, and a list of upgrades and new options.

When slide outs hit the truck camper market in the late 1990s, it was the additional floor space that wowed the crowds.  To this day, when one, two, or even three slides go out, nobody says, “Hey, look at all the additional ceiling space!”  It’s always the floor that gets the attention.

Why are truck camper owners more fascinated with floors than ceilings?  Why do truck campers look down instead of up?  Who knows!  Whatever it is, our collective fascination with truck camper floor space is about to be seriously tested. 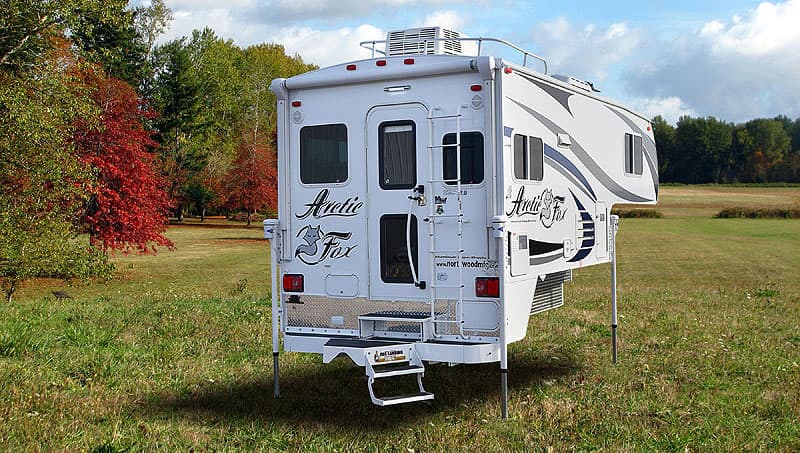 Above: The Arctic Fox 865 is officially back in production for 2017.  All photography and computer renderings were provided by Northwood Manufacturing.

TCM: Are there any Arctic Fox models being discontinued for 2017?

Donald: We’re not discontinuing any models this year.  The Arctic Fox 865 is coming back for 2017 and we’re happy to have it back.  We also have a camper in the planning stages for the fall.

TCM: When are you hoping to announce the new Arctic Fox model?

Donald: It’s still in R&D so we’re not 100% on the design at this point.  We never come out with anything that is not tested.  Right now it looks like it’s a go, but the timing has not been set. 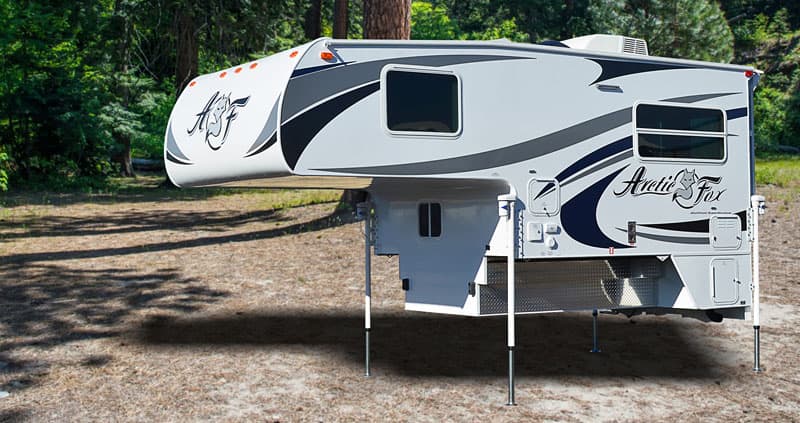 TCM: The Arctic Fox 865 debuted in the fall of 2008 and was officially discontinued in 2012.  That said, there are quite a few Truck Camper Magazine readers who bought 2013, 2014, 2015, and now 2016 Arctic Fox 865 truck campers.  What’s the story behind the disappearance of the 865, its continued off-menu existence, and now its formal reintroduction?

Donald: 865 sales declined in 2012.  At the time we discontinued it we thought it was a good decision.  Once we took it off our official model menu, people who prefer non-slide truck campers continued to request it.  To accommodate these requests, we were building 865 models once a year.

Even though we took the 865 out of our brochures and our website, we had customers request it.   Somehow everyone knew it was available, and kept ordering the 865.

TCM: Well, it was always our favorite Arctic Fox model.  And we may have published this fact a few times, and that the 865 was available off-menu, if you asked.

Donald: Now the 865 is officially back.  It actually never left because of consumer demand. 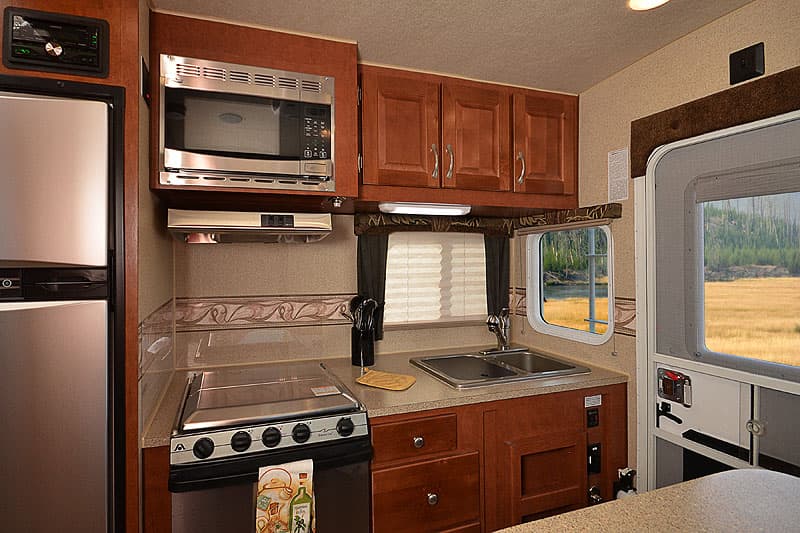 TCM: Has the 865 been updated over the past four years? 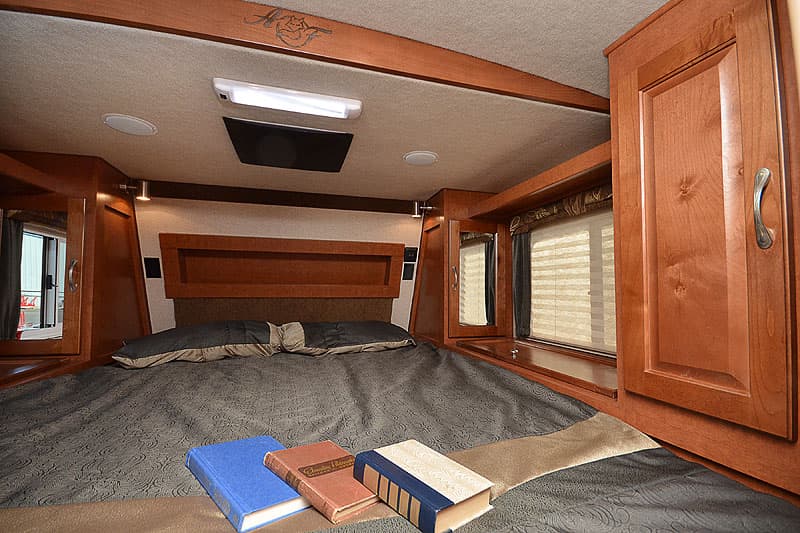 Above: The cabover bedroom in the Arctic Fox 865

Some people want an Arctic Fox, but don’t want a slide-out.  There are a lot of high-end truck campers available, but most have slides.  With the 865, we have a high-end Arctic Fox, with Absolute Northwood quality, without a slide. 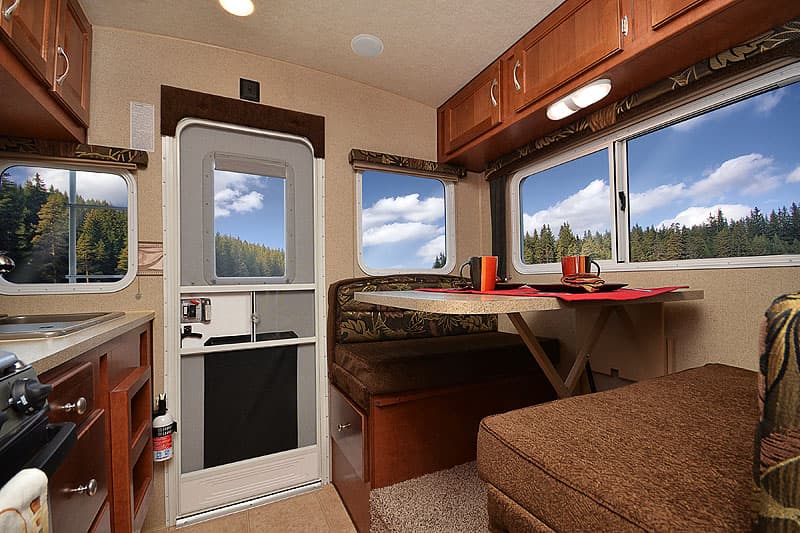 Above: The full-booth dinette and rear panoramic view of the Arctic Fox 865

The 865 also distinguishes itself with a rear kitchen and the panoramic view out the back.  It also fits long or short bed trucks.  With the short bed configuration, we also get built-in generator capability.

Above: Stainless steel appliances are included in all 2017 Arctic Fox campers 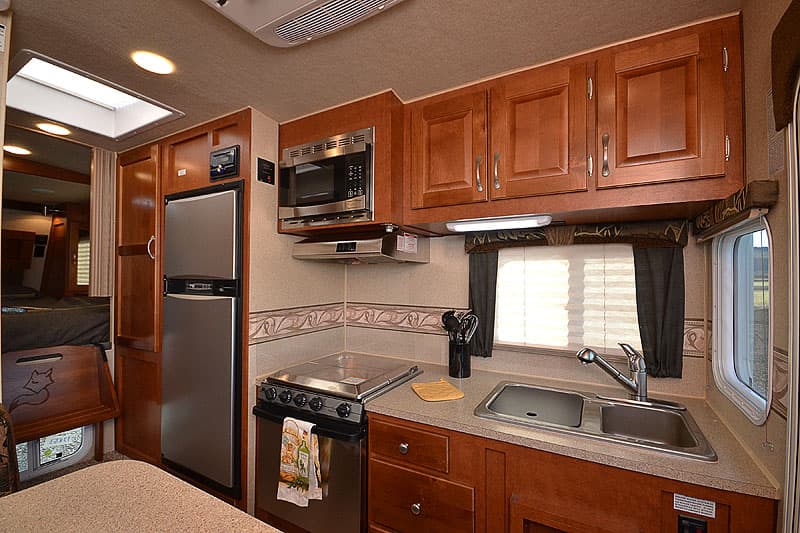 Above: The straight kitchen in the non-slide Arctic Fox 865

TCM: The rear panoramic view is truly exceptional and a feature very few truck campers on the market have.  When can we expect to see 2017 Arctic Fox 865 truck campers arriving at Northwood dealers?

Donald: We will probably have a run built in the fall and then again in early winter.  Of course there are a few 2016 models currently on dealer lots. 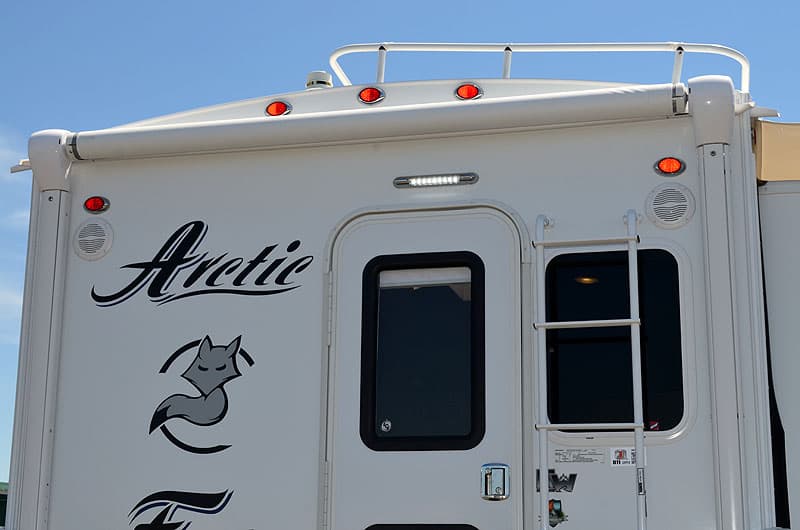 Above: The cathedral arch roof and chrome clearance light bezels are new for 2017

Doug: It’s an arched interior ceiling instead of a flat ceiling.  We had a crowned roof before the 2017 models, but now we have gone to a cathedral arch which is thicker and has a better R insulation value. 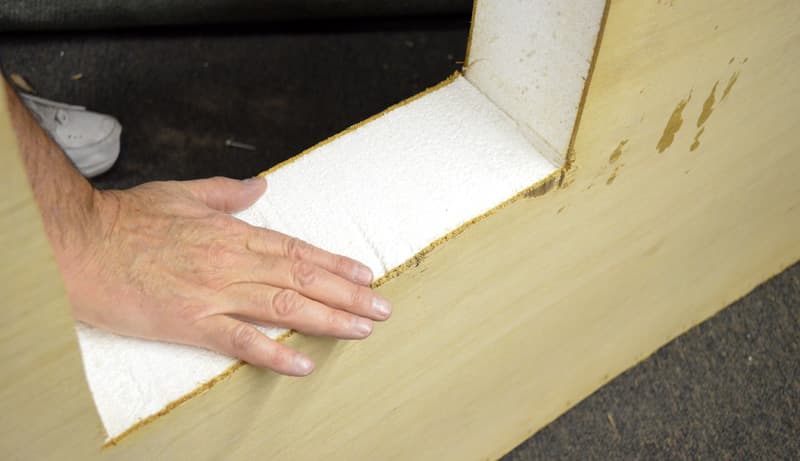 With the arched roof, there is no chance of standing water.  The ceiling is also taller so the cabinets are taller in the kitchen and cabover area.  The biggest benefit is residential feel and height in the shower. 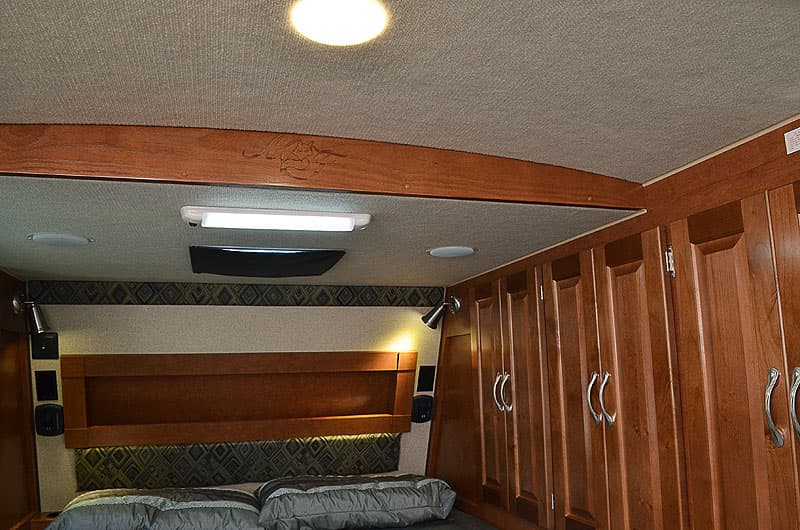 Above: The cathedral arch makes for a taller interior and more cabinet space, Arctic Fox 811 shown above

For taller people, it’s great.  I stand at 6’4” and it’s great to be able to stand in the shower and not be in the skylight. 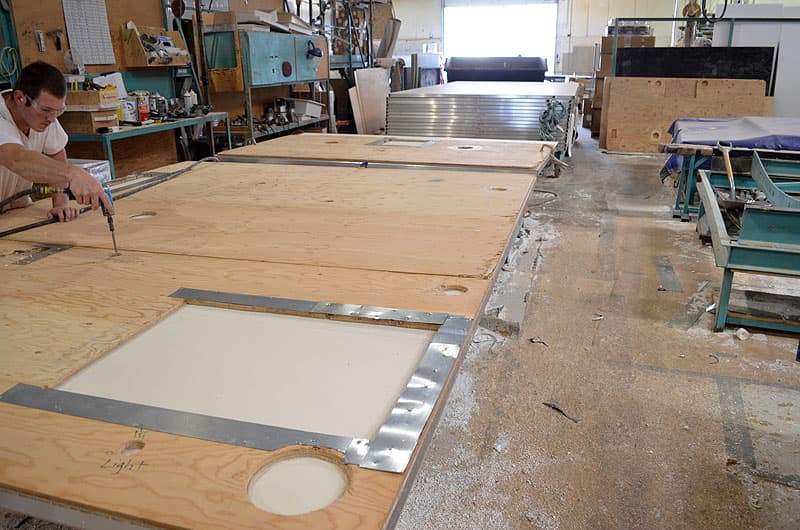 Above: Arctic Fox camper roofs are built with a wood frame and two-pound closed foam insulation

TCM: How are the new cathedral arched ceilings constructed?

We then have a jig that reinforces and supports the arch shape through a vacuum bonding process.  We had 36 people on the roof of one of our new cathedral arched Arctic Fox campers.  It’s a lot stronger.

Above: To watch the above video in High Definition, press play, click on the quality “wheel” symbol in the lower right corner of the YouTube screen, and select 720p or 1080p.  High Definition videos do take longer to load and play.

TCM: How thick is the new roof?

The new roof is composed of two-pound closed cell foam insulation laminated from front-to-back and side-to-side.  We now have more than three times the volume of foam in our ceiling providing increased insulation and strength.  With more closed cell foam and more surface area to laminate, the roof is much stronger.

Doug: I always test new campers because I stay in them a lot.  I now have the first unit with a cathedral arch ceiling.

Donald: The arch roof has proven to be the best for our Arctic Fox trailer lines, so that’s what we went with for our 2017 Arctic Fox truck camper line. 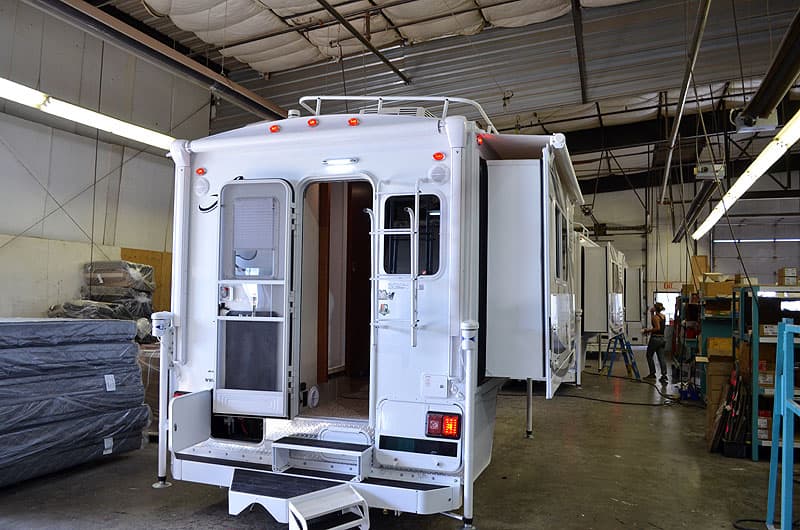 Above: 2017 Arctic Fox campers being built on the Northwood production line

TCM: Good idea to let the trailers be the guinea pigs!  Are the new roofs lighter or heavier than the previous roofs?

Donald: Everything we do is thoroughly tested whether for campers or trailers.  The 2017 Arctic Fox models are 90 to 120 pounds heavier depending on the model.  The added weight is largely due to the new roof, but also because we added porcelain toilets to our truck campers this year.

TCM: What about attaching solar panels or racks for kayaks or canoes to the arched roof shape?

Donald: We have had a great experience with the cathedral arch on our trailers and know, without a doubt, that you can attach things to the arched roof.  It works well, and has multiple benefits in insulation and strength.

Doug: I have a 2017 Arctic Fox with the new roof and solar panels in my driveway now.  They’re not charging any different. 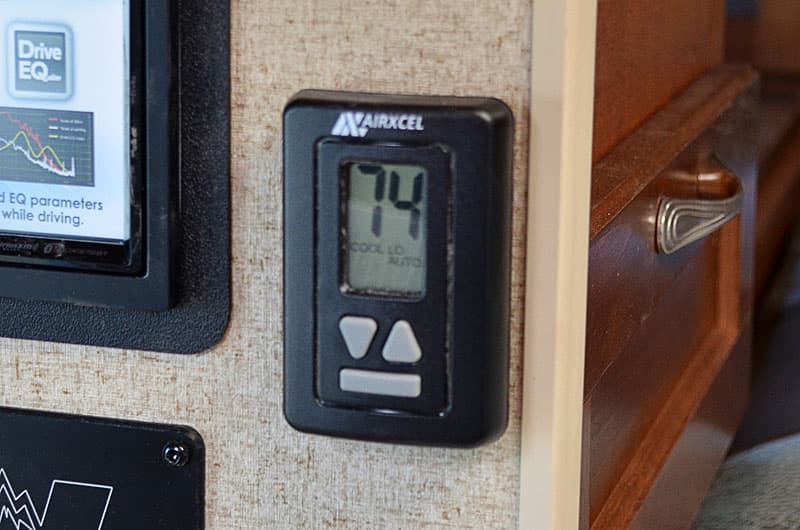 TCM: Tell us about the new residential-style digital thermostat.

Donald: It’s similar to a house.  If you don’t want to be too cold, put the digital thermostat on 65 when you leave and then bump it up to 72 when you get back.  Since it’s digital, you always know the temperature.

Doug: It’s a climate controlled, so you can set it and it doesn’t care.  It turns on the air and/or heat as necessary.  I set the temperature at 72 degrees.  The air conditioner comes on if it’s warmer, and the heat if colder.  That is standard for 2017. 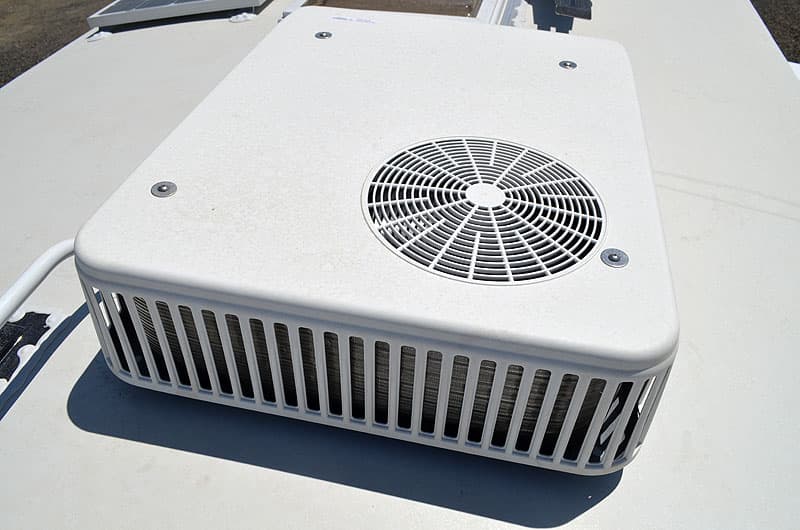 TCM: Yes he would.  Of course he would also like built-in cat doors, but we wouldn’t recommend that option for everyone.  Speaking of options, air conditioners remain an option for 2017, correct?

Donald: I think about 95% of our units ship with air conditioners.  It’s a rare case for someone not to order one. 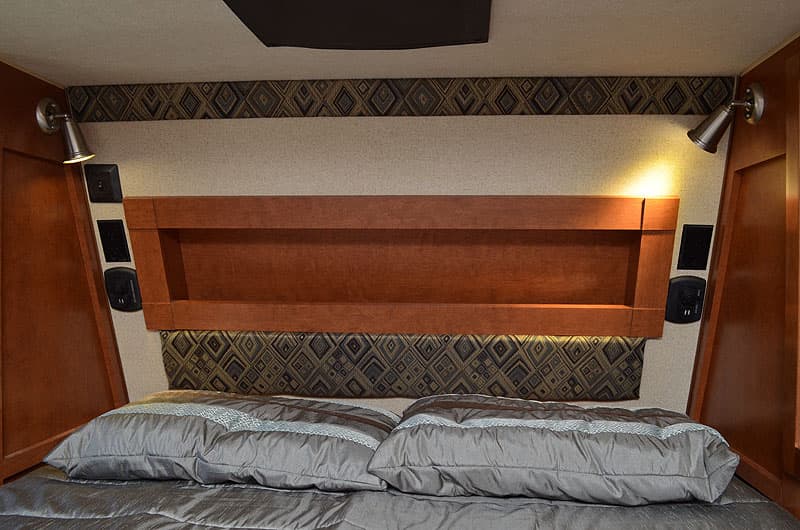 Above: The new LED lighting and 12-volt and USB Charging Centers on both sides of the bed

TCM: For 2017, all interior lighting in Arctic Fox truck campers is LED.  What specifically has been updated to LED for 2017?

Doug: All Arctic Fox interior utility lights were LED before, but the reading lights in the cabover were not.  Now they have perfected the look and feel of the diodes in LED reading lights, so we are now all-LED. 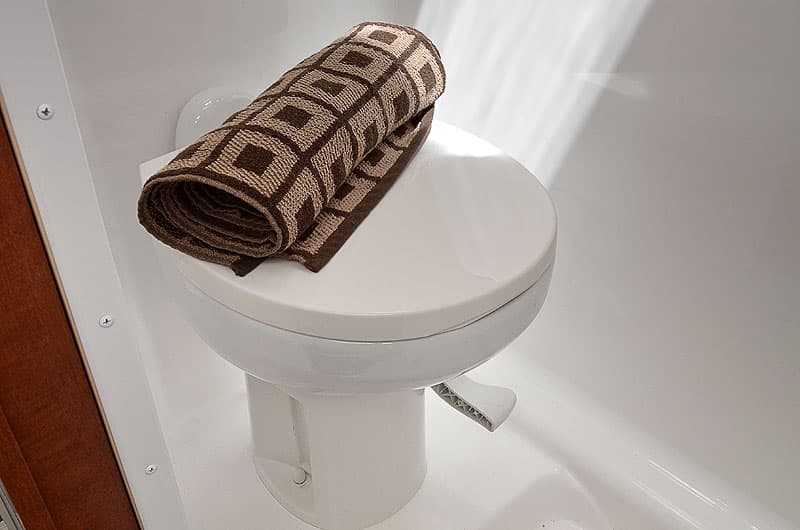 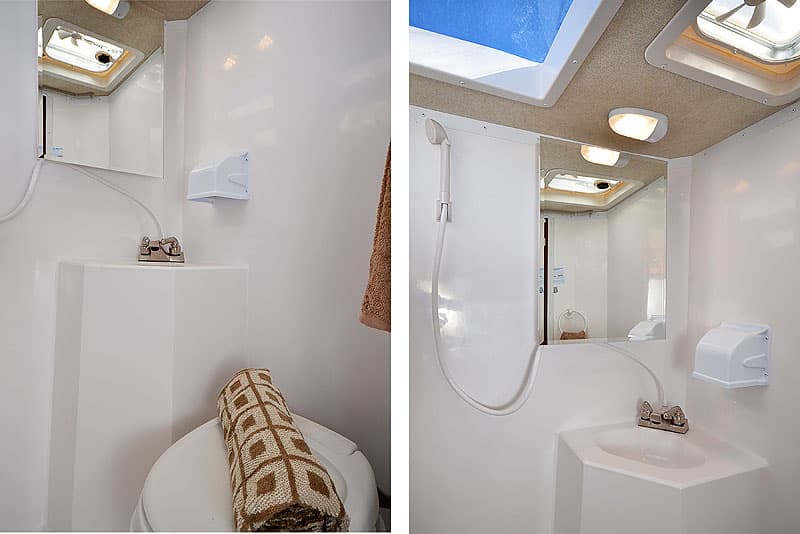 Above: The wet bath inside an Arctic Fox 865 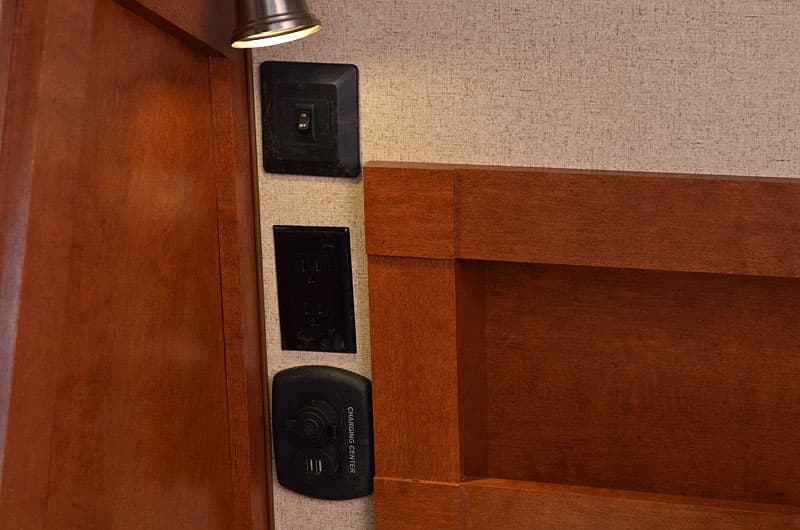 TCM: Our readers will be excited about the 12-volt and USB Charging Centers on both sides of the cabover bed for 2017.  Where did this update come from?

Doug: For 2017, all Northwood products get three 12-volt and USB Charging Centers, one in the main living area, and two in the bedroom.  The Charging Center comes with one 12-volt outlet and two USB ports that offer a combined 4.2 amps of charging power.

I’m glad we went to charging centers in the bedrooms because I didn’t realize how many CPAP machines were being used.  Customers have been asking if we could add another 12-volt in the cabover for CPAP machines, charging phones, and other devices.  It doesn’t matter which side you sleep on, you now have a charging center.

As I mentioned, the USB ports supply a combined 4.2 amps which will charge a smart device whether it be a tablet or a smart phone. 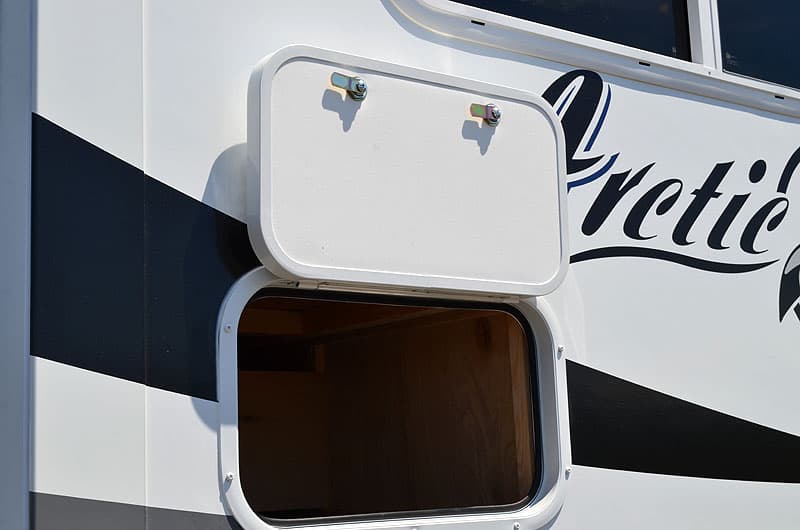 TCM: Apple and Samsung stock holders thank you.  What are the advantages of the new magnetic luggage door catches?

Doug: The magnetic door catches stick in place; it’s that simple.  You just touch the lug door magnet to the sidewall magnet and it’s held open.  The spring loaded catches we used in the past were top of the line but, over years of prolonged use, they could fail and take a bit more effort as you have to open them and hook them on your lug door flange.  The magnetic catches are never going to wear out. 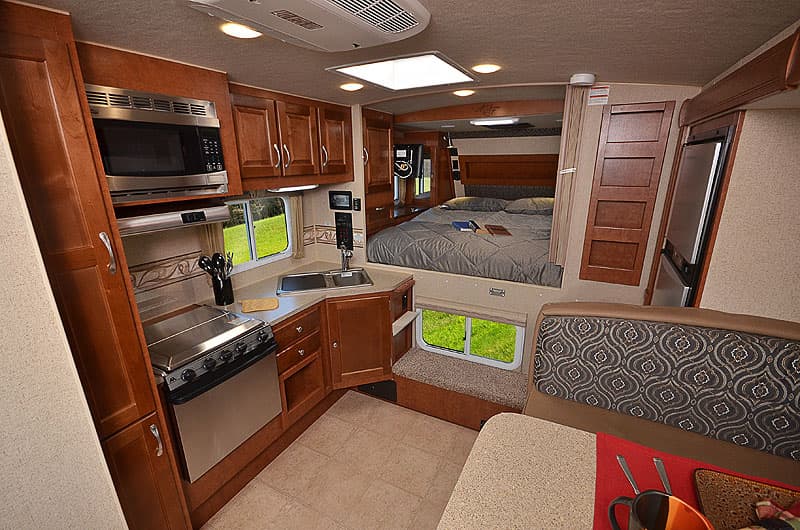 Above: The Elegant Truffle decor in an Arctic Fox 990

TCM: Tell us about the two new decors, Elegant Truffle and Solitaire Azul.  How were these two decors designed and selected?

The fabric does not just have to look good, but it needs to do the things they need, like bend around valances.  We also don’t want the fabric to be too shear.  Then, the staff and employees in the plant pick out the fabrics and decors they like the most. 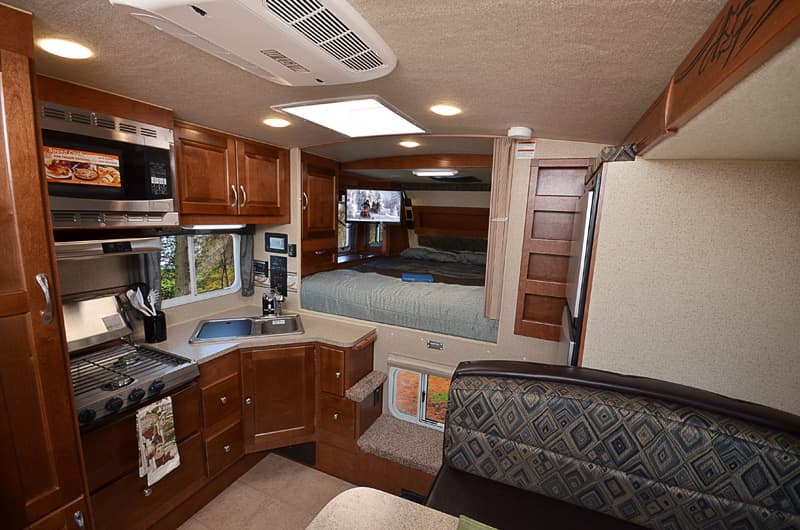 Above: The Solitaire Azul decor in an Arctic Fox 811

We narrow the choices and go again with fewer selections.  We then take those and put the decors in a trailer or camper.  We review it again to make sure the placement is right.  Finally, we put the new decor in our model year prototypes.

When the 2017 models come out, we’ll get more feedback from our dealers and customers.  People have loved the new decor choices so far. 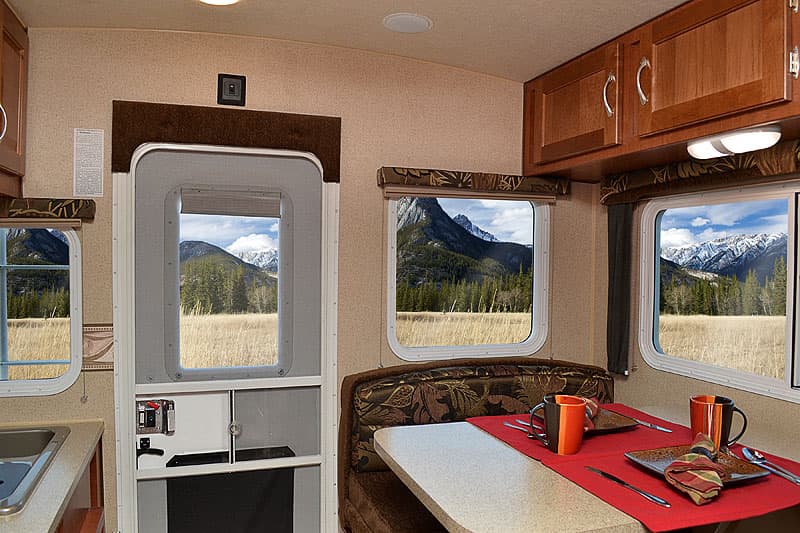 Above: The Early Autumn decor in an Arctic Fox 865

Donald: We kept one fabric from 2016, Early Autumn.

We have a lot of data on the decors we have discontinued.  For example, Flagstone Mosaic was popular in the beginning, but then it declined over the years.  Those decisions become easy by looking at the data.  Shimmering Sands also did well, but eventually declined. 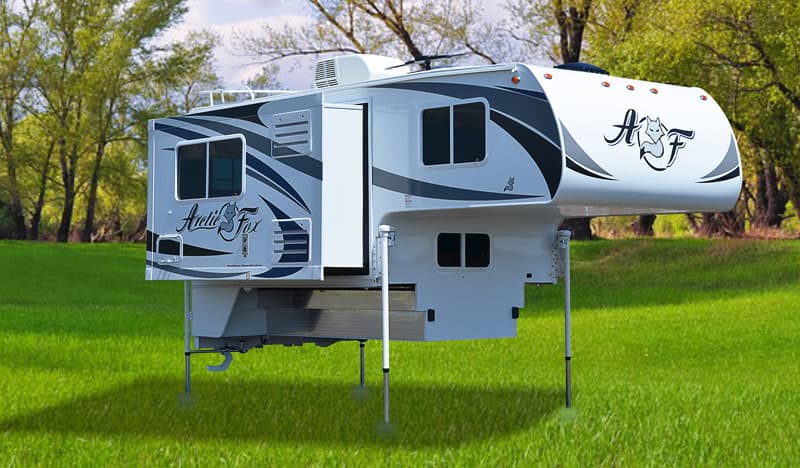 Above: Chrome bezels around the clearance lights, pictured here on an Arctic Fox 990

TCM: Is there anything else to share about the 2017 Arctic Fox updates?

TCM: Are they better sealed?

Doug: Yes.  Instead of two exposed screws, there is a chrome bezel around the lens.  We have butyl and then a secondary sealer over the top.