What happens when a 1988 Mercedes Unimog truck takes on a 1971 Alaskan Camper?  Bob Ragain takes us off-road, onto the Jeep trails and beyond our wildest truck and camper matching dreams. 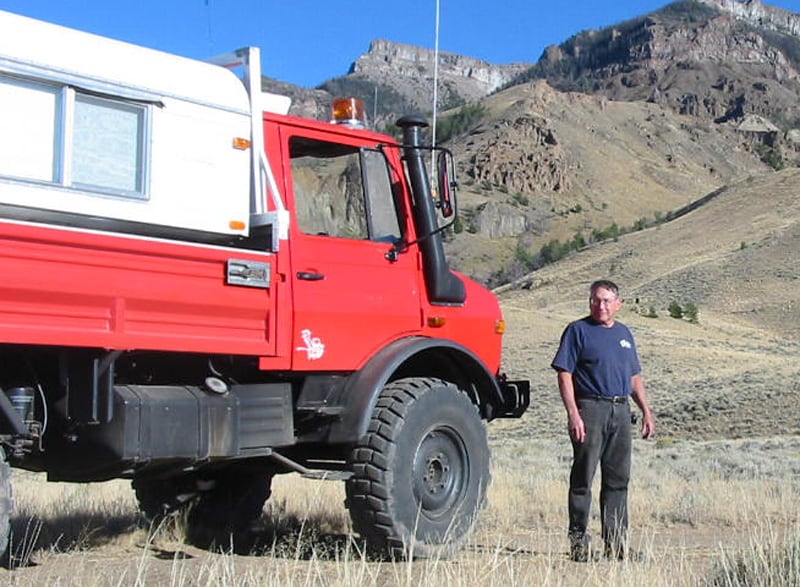 “I saw my first Unimog in the eastern jungle of Ecuador in 1978 and was determined to have one because they held up to such abuse.”

We met Bob Ragain when he answered a Question of the Week, “Have you ever needed four-wheel drive with your truck camper?”  Bob responded with, “Yes, just about every time we go out camping.  Four-wheel drive is a necessity for us, and so is a winch.”

Along with that response, Bob sent us lots of photos of his Unimog and Alaskan Camper.  We emailed him back right away to learn more about his stunning rig.

My wife, Kitty, and I have been camping together for forty years.  Kitty and I met in a cave where I pulled her out of an underground river in 1968, and kept her.  That is literally the truth.

She and I were spelunking with different groups when the soil along an underground river collapsed, taking her neck deep into cold water.  I was the closest to her and pulled her out.  Curiously, one of my daughters also met her husband on a camping and caving trip.

Kitty and our kids followed me around for many years working oil field locations in the United States and South America.  I was an engineer and site manager in an oil field service company.  We would buy Ford three-quarter or one ton trucks and run them up and down the primitive roads.  The trucks would literally fall apart from the vibrations of the oilfield roads.

I saw my first Unimog in the eastern jungle of Ecuador in 1978 and was determined to have one because they held up to such abuse.  After I transferred back to the United States, it was another twenty years before Unimogs became available for a reasonable price. 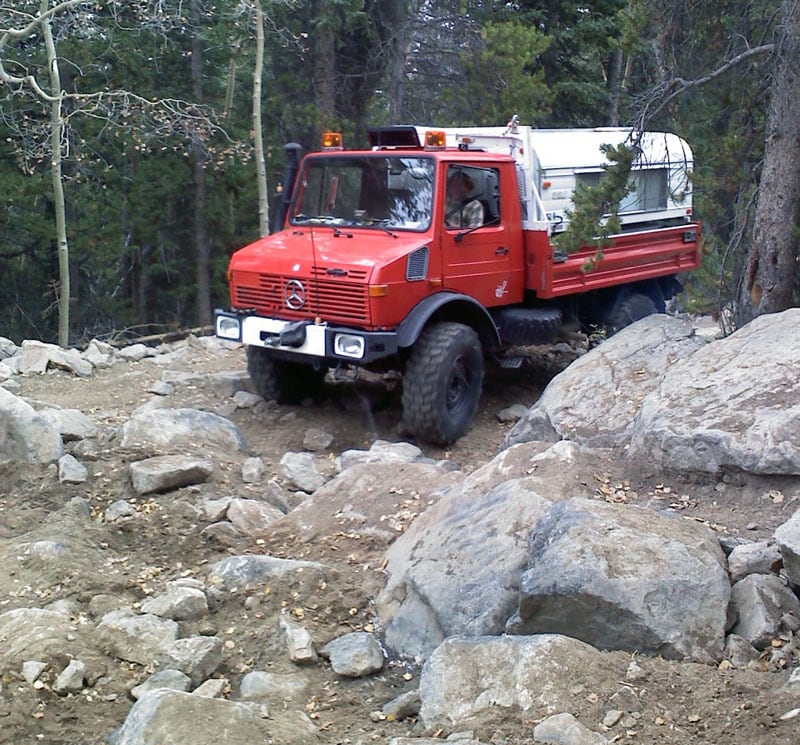 The straw that broke the camel’s back, so to speak, and set up our hunt for a real camper, was a yearly European Military vehicle group camp-out in the Colorado high country.

We call the camp-out the “Cold Butt Camp-out”.  It’s in the dead of winter at the highest elevation.  We broke our way through the snow to get to it.

Outside facilities were in two feet of snow that year.  That’s when Kitty laid down the ultimatum; no more camping in the winter without an indoor toilet!

We eventually bought our first ‘mog in 1997, an ex-military three-color-camo Unimog model 404 radio communications truck.  It had quite a bit of radio equipment when we first got it and cots which we used for camping.  We camped in that first Unimog for many years.

We have now upgraded to a Unimog U-1300L truck and a thirty-eight year old Alaskan Camper!  The Alaskan Camper offers us a lot more comfort.

I actually have a total of six Unimogs.  The other three Unimogs are basically tractors.  We have a farm here in east Tennessee and we use the 406 model Unimogs as tractors to mow and till the land, harvest logs, and do basically anything I need to use them for.

“We usually cruise at about 45 miles per hour.  At that speed, we get about 14 miles per gallon.”

Unimogs can be shipped from Germany, Belguim, Switzerland, African countries, and even Brazil.  Unimogs are common almost everywhere except the USA.  They are in surplus in Europe and have recently started hitting the United States in quantity.

It would cost you about $7,500 dollars for a good Unimog truck.  It would be an early model like from the late 50s or early 60s, gas powered, and configured as a radio truck or a troop carrier.  These Unimogs are all model 404 and feature a flat bed with seats or communications box in the back. 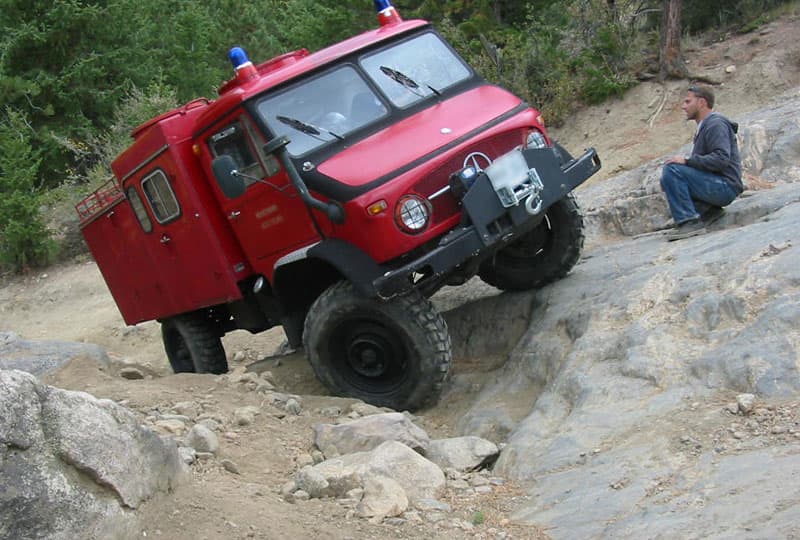 We found this red U-1300 model Unimog in early 2008.  It was built to military specifications, but was prepped as a fire truck.

It spent its life in a fire department in Gagganau, Germany.  It had the torsion-isolated bed and other options we wanted to build a camper on including a faster differential and portal gearbox ratios and a high gear count (sixteen forward, sixteen reverse, and overdrive).  Many Unimogs are really slow without these options.

This Unimog U-1300 hits 70 miles per hour ‘in the green’ at 2,400-rpm with red-line at 2,800.  This setup weighs just over 14,000-pounds, with almost equal weight distribution front and rear.  We also have an M105A2 military trailer we pull with the Unimog when we really want to take a lot of stuff with us. 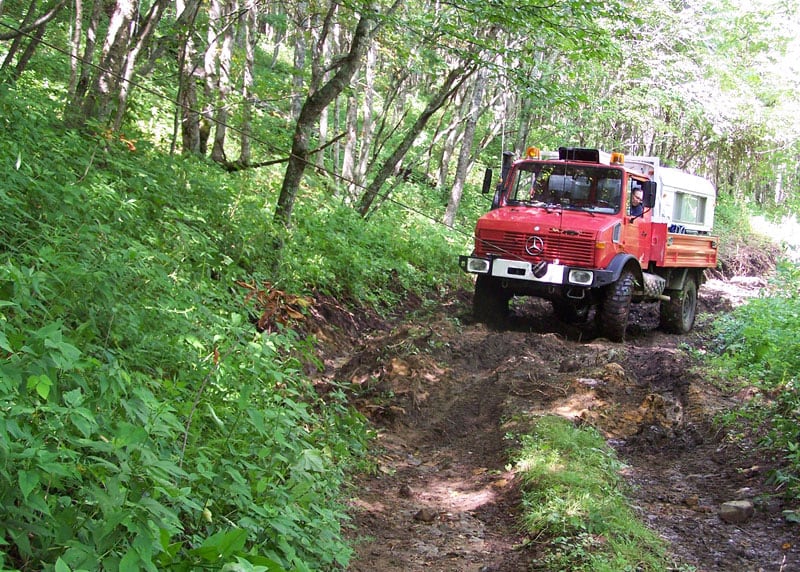 We usually cruise at about 55 miles per hour.  At that speed, we get about 14 miles per gallon.  It’s maybe one mile per gallon lower with the camper because the camper is streamlined behind the cab.  A major advantage of the Alaskan camper is the low profile which helps with the mileage.

Properly optioned Unimogs will cruise easily at 60 to 65 miles per hour.  70 miles per hour is as fast as I’ve gone in ours.  My Unimog was made for the fire department so it’s got faster axle ratios than a normal Unimog.  It’s also very stable which makes for a smooth ride. 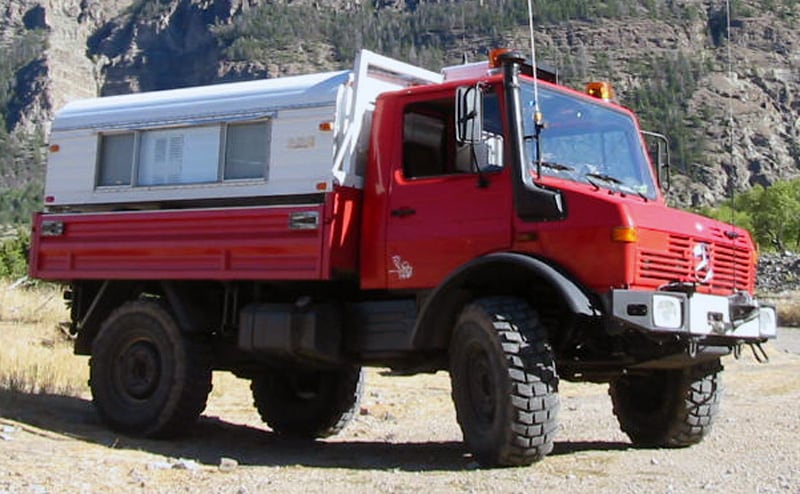 Challenges of the Unimog

The compromise with the Unimog is in the tires.  It’s hard to find Unimog compatible tires that run well on the highway.  When off-roading, we need to be aired down to 8 or 10 psi.  Michelin tires are the best that I’ve found for both highway and off-road, but they wear pretty fast.  Fortunately, they can cost as little as $100 each as military surplus.

“My Unimog fits in a parking spot.  It’s really no wider than a Hummer.”

Once you get familiar with driving a Unimog, it’s not unusual.  From the outside, the Unimogs look huge, but it’s mostly just in height.  Driving the Unimog does not require a special license because it has a brake system like regular pick-up truck.

I have a single rear wheel Ram truck and the Ram is 3-feet longer and has a 2-foot longer wheel base than the Unimog.  I’d much rather be in the Unimog because it turns so much sharper than the Ram and has a smaller turning radius.  My Unimog fits in a parking spot.  It’s really no wider than a Hummer. 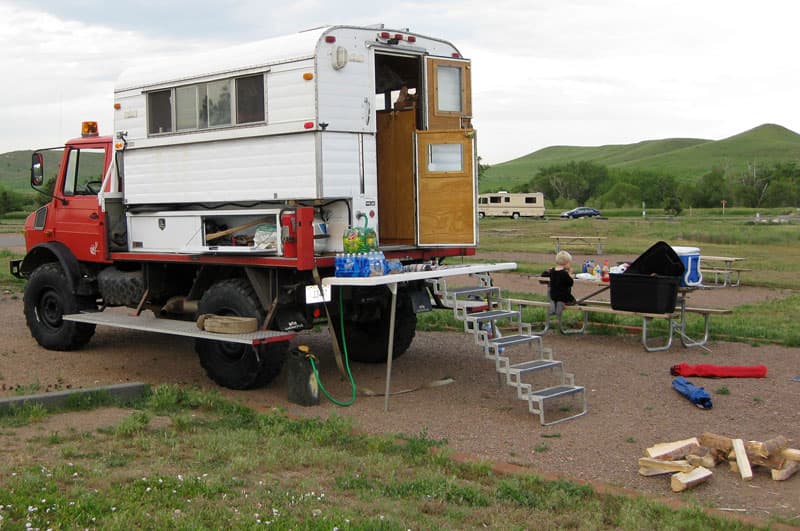 We found our Alaskan after months of internet searching.  It was in Minnesota and we were in Fairbanks when it showed up on Craigslist.org.  Of course Minnesota is along ‘some’ route back to Tennessee so we went by and picked up the Alaskan.

The Alaskan is a 1971 Alaskan 10-foot NCO – no cabover.  The truck is a 1988 Unimog with four-wheel drive, locking differentials, and a 6L turbo diesel.  We have 42-inch tires on 20-inch wheels.  The winch is a Warner 12,000-pound hydraulic rear mounted winch that’s fed through to the front.

I chose an Alaskan camper mostly because of their history.  I read about them for years.  Many people with Unimogs have owned them before.  Our Alaskan is 10-feet with no overhang which is what I needed for my truck.   The amazing thing is that our Alaskan is going on 48-years old and it’s still functional.  It’s also not as wide as the truck so off-roading it will not tear up the camper.

The Alaskan Camper was in great condition when we got it.  We have made a few modifications to modernize it somewhat.

The 3-way refrigerator, stove, and propane heater are original.  We added a Thetford cassette toilet and a 12-volt water pump for running water in the sink.  A separate DC system was wired in with LED lighting, a propane/carbon monoxide detector, and power for my ham radio toys.

We have modest needs for DC so a 115 AH 12-volt battery is adequate.  That battery charges off the truck’s 24-volt system through a Wilmore 24-volt to 12-volt converter, 35-amp capacity.

I have a solar panel for the roof but have not installed it.  We seldom stay in one place more than a couple of nights and our battery reserve has been adequate so far. 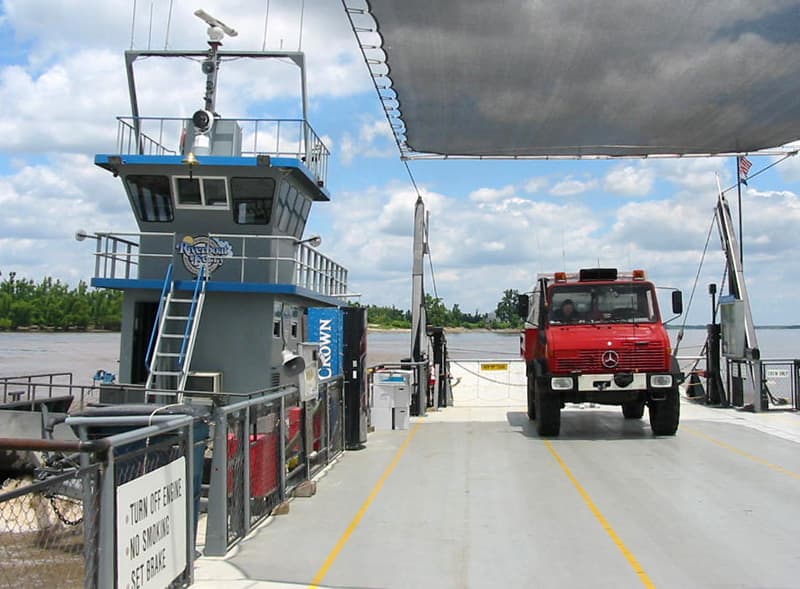 When we mount and demount our Alaskan camper, we take out the four bolts and go to my friend’s house who has a car lift.  We lift the camper up and onto a trailer.  I don’t unload the camper in campgrounds.  If I want to go four wheeling, Kitty has to go with me.

The camper does not have tie-downs and turnbuckles.  It’s bolted through the floor to the Unimog.  It’s the way the early Alaskans were made to mount; through the bottom of the camper and through the bed of the truck. 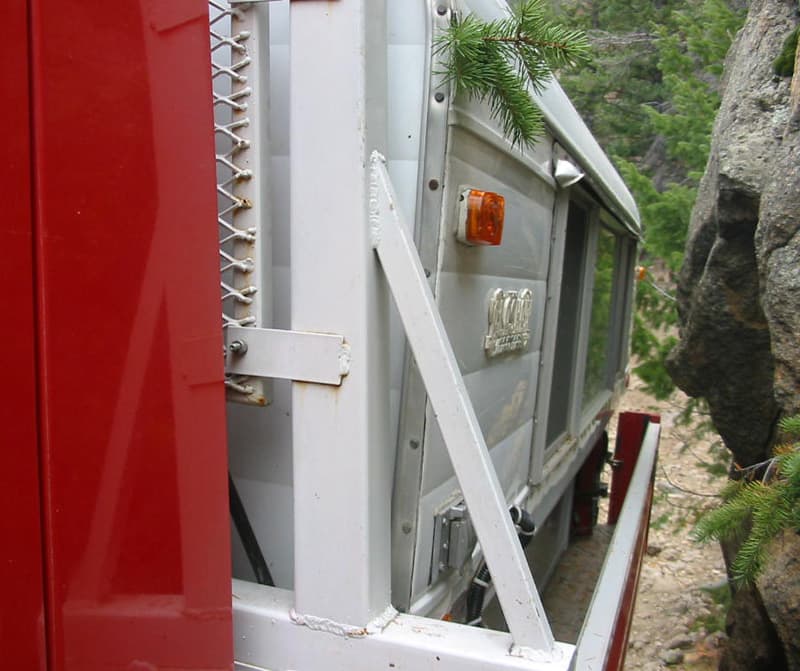 “We can go most anywhere the highly modified Jeeps can go. And with the Alaskan, we can go off-roading for a long time.” 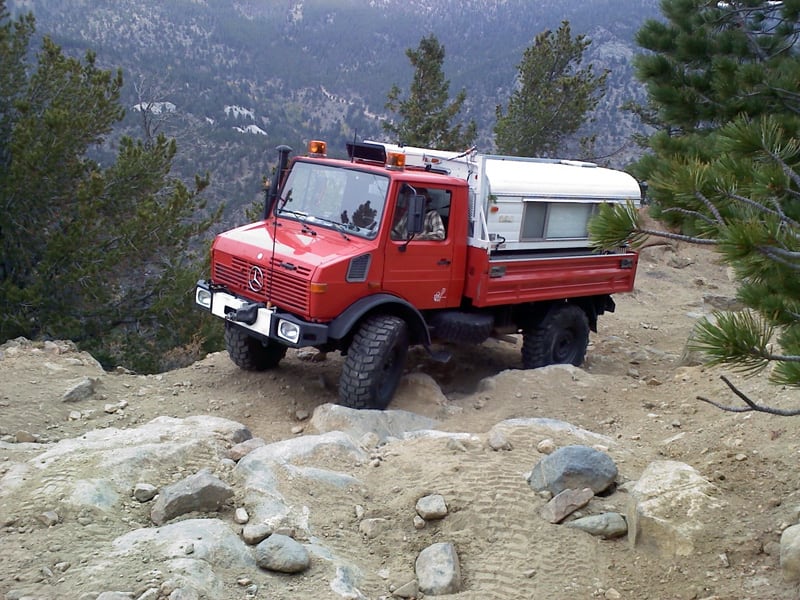 I applied to participate in a Camel Trophy Challenge in 1982, and was chosen as a finalist.  I was one of 30 out of 7,000 applicants.  I didn’t get to go to Papua New Guinea but sure had a blast in the trials in California.

We got the first Unimog in 1997, we try to make an annual trip to Moab, Utah.  For about a week we go on Jeeping trails.  We can go most anywhere the highly modified Jeeps can go.  And with the Alaskan, we can go off-roading for a long time.  Our three kids love off-roading.  We go for enjoyment and to see the sights other people can’t see.  To take a truck camper with me on the trails is unbelievable. 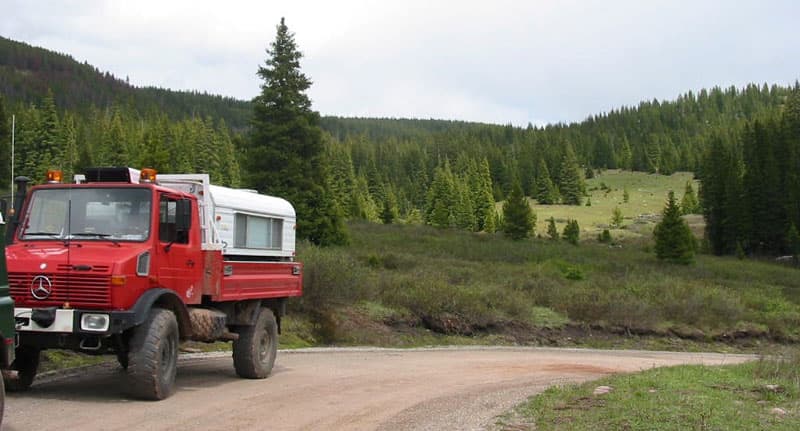 We started going to the Moab gathering in 1998.  For many years, there would be fifteen to twenty Unimogs from everywhere, but that event wound down.

There are also a couple of West Coast events that have started up like the Calico Mogfest.  The Calico Mogfest just concluded and they had fifty to sixty Unimogs this year.  There’s also a gathering in Sheridon, Oregon.  They probably get 60 to 70 vehicles, all Unimogs and other European vehicles.

The events are over a long weekend.  People show up on Tuesday or Wednesday and stay through the weekend.  Most camp out with tents or sleep under a tarp. 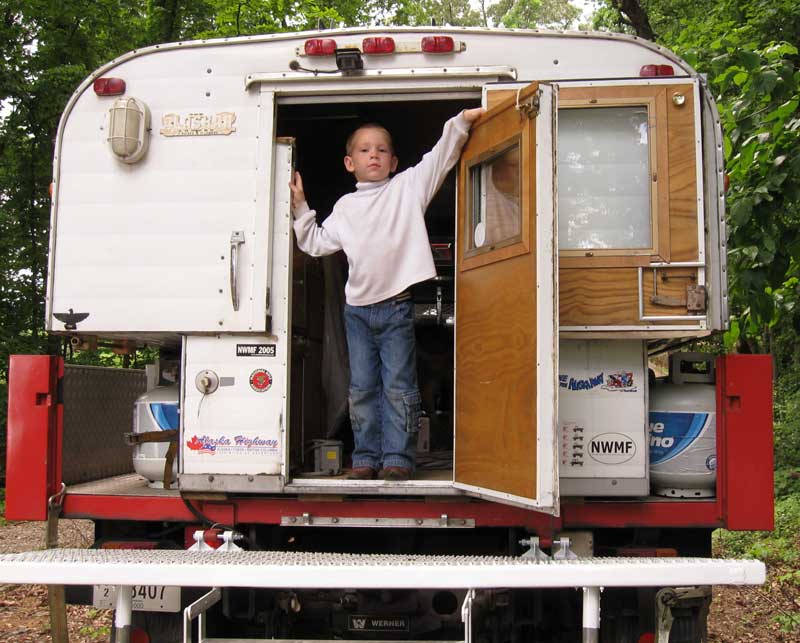 Trips with the Rig

We’ve been out a dozen times in the past few years and put 50,000 miles on the Unimog since we bought it.  We’ve gone to Colorado, Montana, Wyoming, the Carolina Outer Banks, and taken five trips into north Georgia.

Our travel and camping method while on road trips has evolved to a couple of nights boondocking and then a night in an established commercial campground where we restock water, empty reservoirs, and get a hot shower.

We like State Parks and National Forests.  When we see a campground symbol, we’ll just go spend the night.  At the campgrounds people are always talking to us.  People often take pictures of our unique rig. 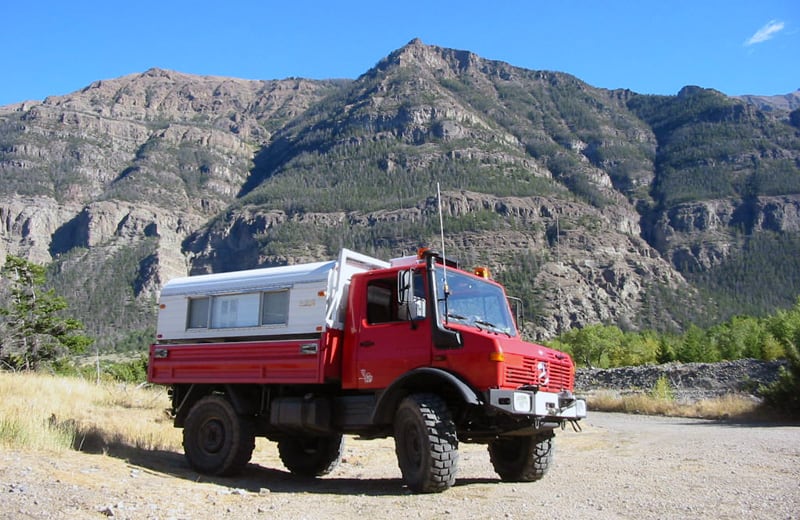 When we travel, Kitty and I will leave Tennessee and head towards Denver.  We won’t even choose a route.  We’ll take along an atlas and look on the maps.  I don’t like interstates or driving the same roads twice, so we always pick a different route.  And I have a passion for the few remaining river ferries so we often detour to take a different one.

Read more about Unimog Campers in Truck Camper Magazine by looking at Building A Unimog Rig, Paving the Way for Unimog Campers and Alaskan Unimog Adventures.

Is a Unimog a practical solution for most truck campers?  Probably not, but we can’t help to want to see more.  More ‘mog, please!

Is your truck camper on a Unimog or another unique truck?  Please share your story about your unique rig.