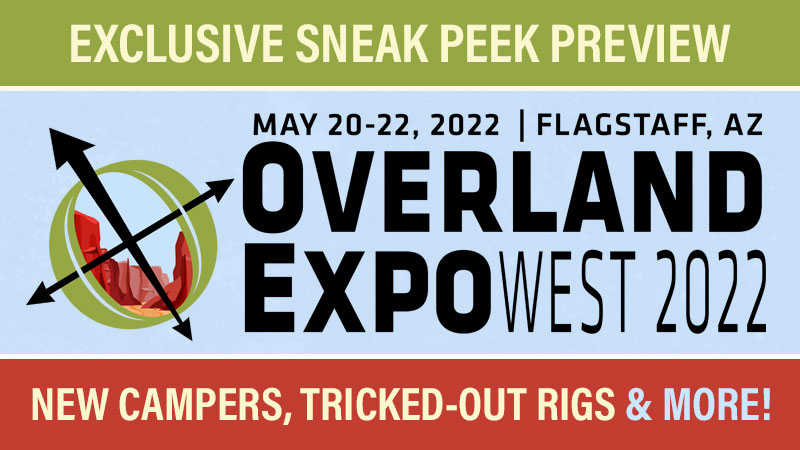 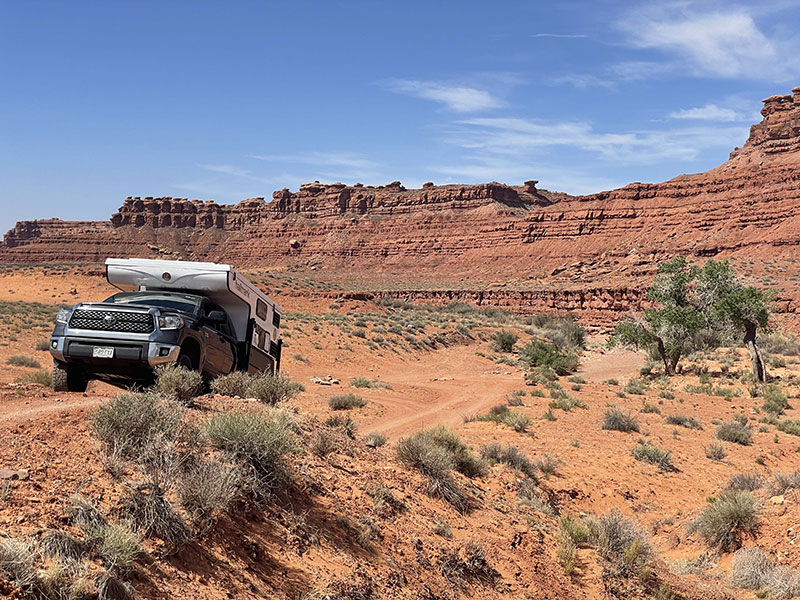 Above: Hallmark RV on the way to Overland Expo West 2022

This weekend, Overland Expo West 2022 kicks off with a number of important new truck camper announcements and some incredible showcase truck and camper rigs. We have gathered the camper news for a sneak peek and will dig deeper into the new campers with the manufacturers upon their return.

Alaskan Campers is bringing two campers; an Alaskan 8.5 on a Ford F-250, and an Alaskan 7-foot model. Both campers have been reviewed in Truck Camper Magazine (see above links) and are excellent examples of the iconic brand. 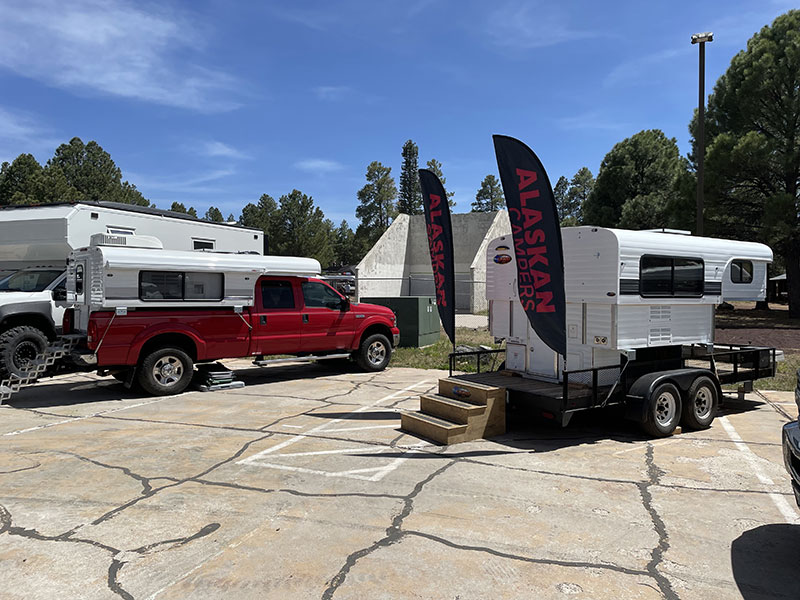 Above: An Alaskan 8.5 on a Ford F250 and an Alaskan 7, check out more photos from Overland Expo on Alaskan’s Facebook page.

Alaskan will also be showcasing their new Lithium Package featuring an Expion360 lithium battery system. Expion360 was founded in 2016 by John Yozamp, the founder of Zamp Solar, with a focus on the overland and recreational vehicle marketplaces. 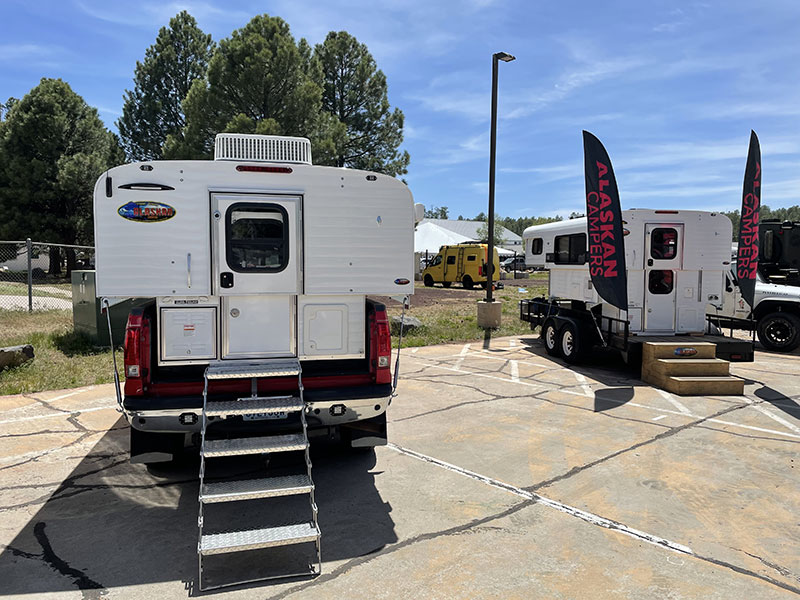 Four Wheel Campers is bringing a number of showcase rigs including an AEV Ram Prospector with a Hawk side-dinette, Toyota Tacoma with a Fleet front dinette, and a Ram 3500 with a Hawk flatbed. 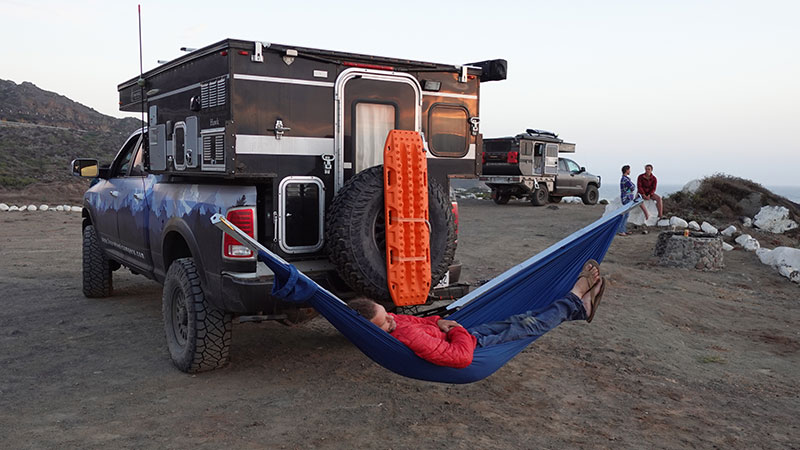 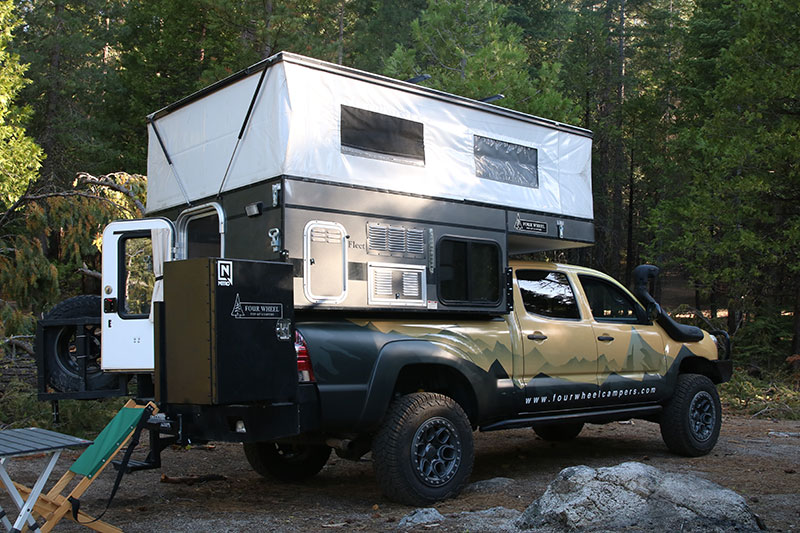 Australian flatbed company, Norweld, is making the trip from down under to present two trucks in the Four Wheel Camper area; a flatbed model and a canopy model. This is a rare opportunity to talk with the team at Norweld.

Four Wheel Campers will also have over twenty Four Wheel Camper customers and their rigs in their booth. There’s no better way to see and experience a truck camper than to see an actual customer rig, and talk to the owner directly. 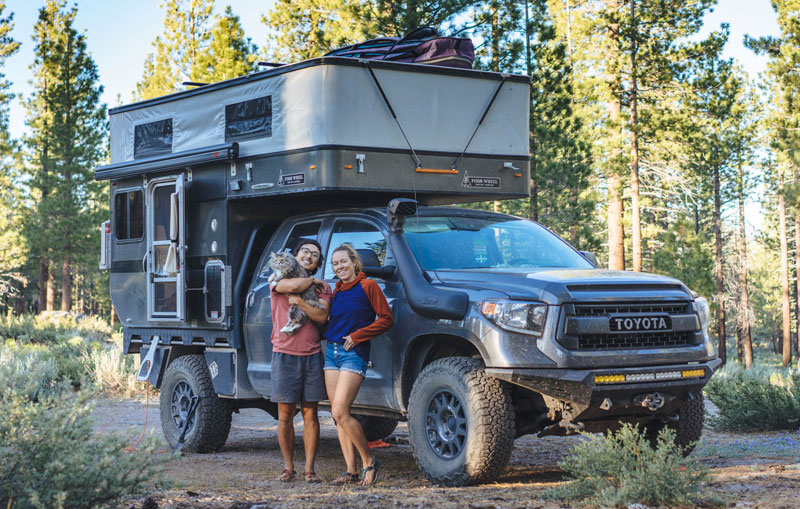 Speaking of Four Wheel Camper owners, MAK and Owen from Bound For Nowhere (pictured above) will also be in attendance showing two films at the Overland Expo Film Festival; Why We Roam and Lost and Found Episode 1. We are huge fans of MAK and Owen and have recently been devouring their amazing 15-episode Alaska series. Camper Beast loves them. 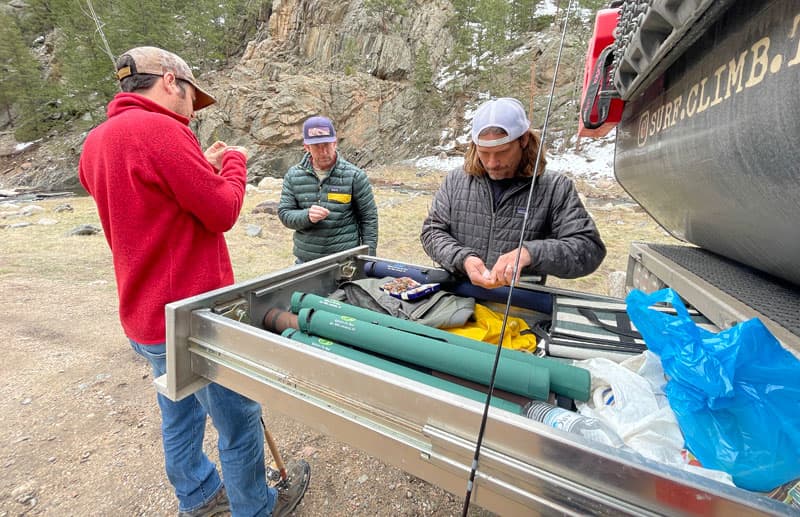 In addition, Off-Road Safety Academy will be presenting two free classes in the Four Wheel Camper booth, and WolfPac Outdoors will have Norweld Australia USA products on display. TCM featured the Norweld system (pictured above) in Charles Rollins and Jessica O’Bryan’s article, “Will Work for Spontaneous Shenanigans”. Several other Four Wheel Camper customers will be showcasing unique products and rigs, so be sure to stop by.

Four Wheel Campers will be showcasing at all four Overland Expos this year; West, Pacific Northwest, Mountain West, and East. 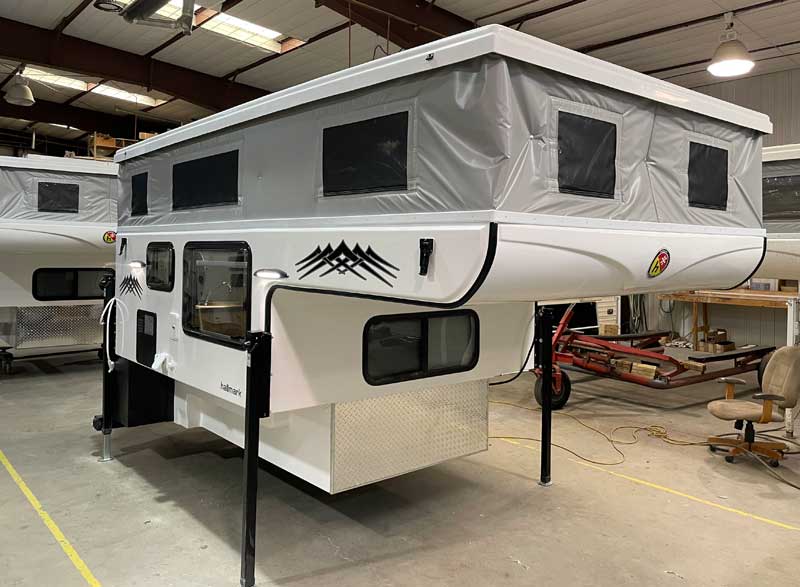 Above: The Hallmark Victor that’s on display at Overland Expo West 2022

This front-dinette Victor has origins reaching all the way back to the 1960s with refinements and major upgrades from the past six-decades. The new model includes a more open floor space, underbed storage, Tern windows, and Hallmark’s latest materials and components. 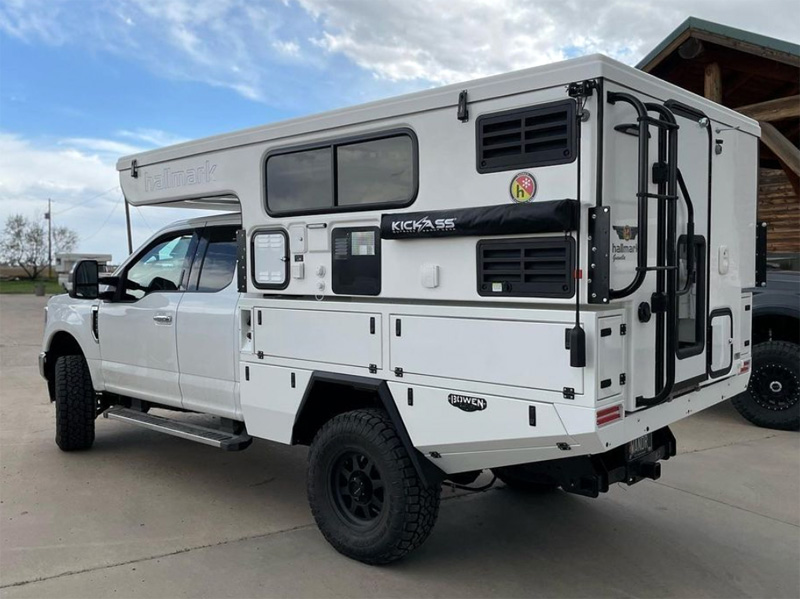 Above: A Ford F350 and Hallmark Guanella, check out more photos from Overland Expo on Hallmark’s Instagram page

For all the Star Wars fans out there, Hallmark RV has a special surprise. A black and white Hallmark Guanella 8 and Ford F-350 with a custom Bowen Customs bed (pictured above) that they’ve called the Stormtrooper. This rig wants to see your identification, is looking for the Death Star plans, and will blast you if you’re a Rebel.

Above: The Hallmark RV display at Overland Expo West 2022

In addition to the new Victor and the Storm Trooper rig, Hallmark will display a Hallmark Milner with Arctic Tern windows.

LOKI Basecamp will be debuting the Icarus 6 at Overland Expo West. LOKI debuted the fiberglass Icarus series with the 8-foot long bed version in TCM back in November, and is now releasing the 6.5-foot Icarus 6 short bed version. 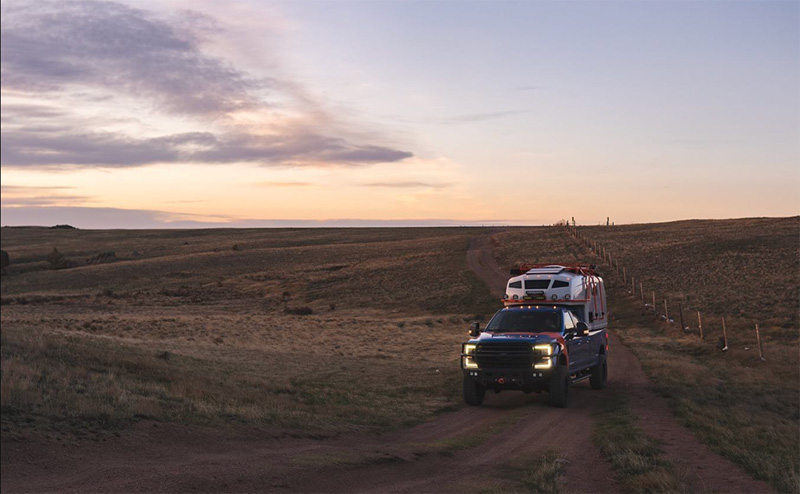 Above: The LOKI Icarus 6, check out more photos from Overland Expo on LOKI’s Instagram page

The concept of this camper is a small, lightweight, and extremely durable all-weather, all-overland conditions truck camper with the latest 12-volt technology and options. Being an even smaller and lighter short bed version takes the go-anywhere in any-condition concept to the next level.

Of course, we’ll dig into this camper more with our standard rigor and detail with a forthcoming new camper announcement. In the meantime, this interesting new camper is exclusively at Overland Expo West. 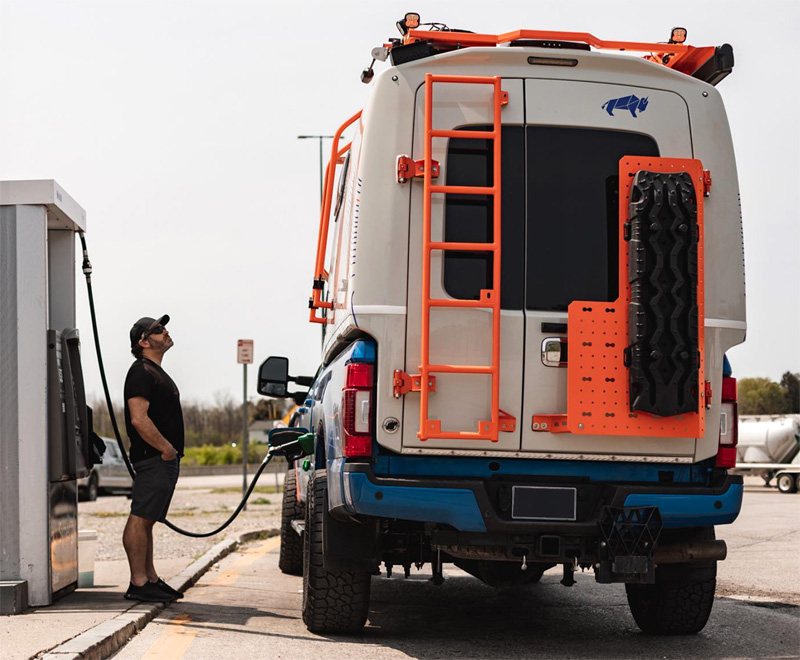 Kudos to the LOKI Basecamp team for making the 2,600-mile (4,200-kilometer) drive from Quebec City to Flagstaff, Arizona. 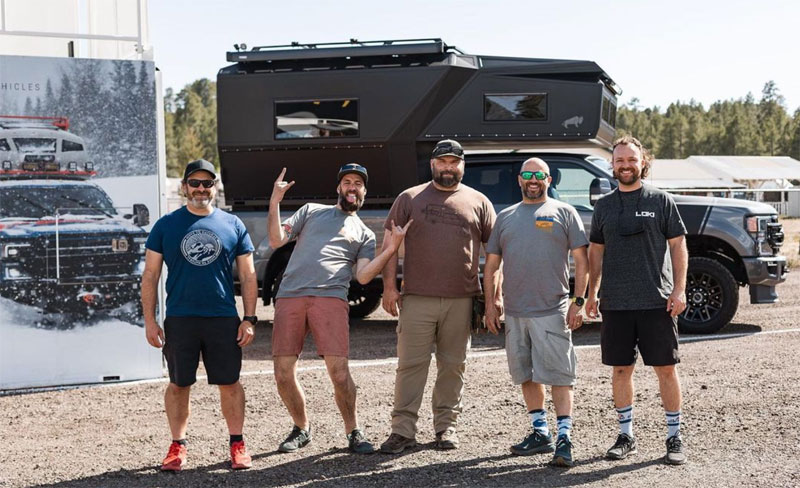 Above: The LOKI team is ready for Overland Expo West

Along the way, they’ve been taking photos of their journey. 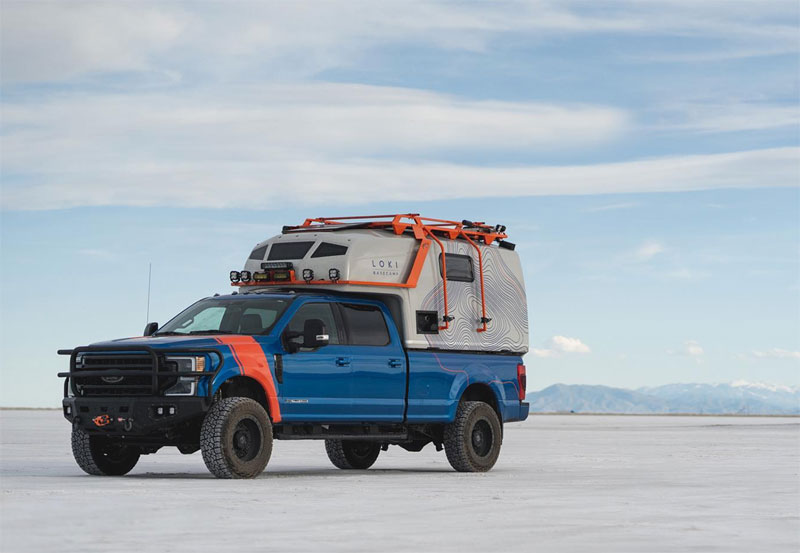 Above: The LOKI Icarus 6 on the Bonneville Salt Flats

The LOKI team really knows how to take photographs and create videos; maybe the best in the business. 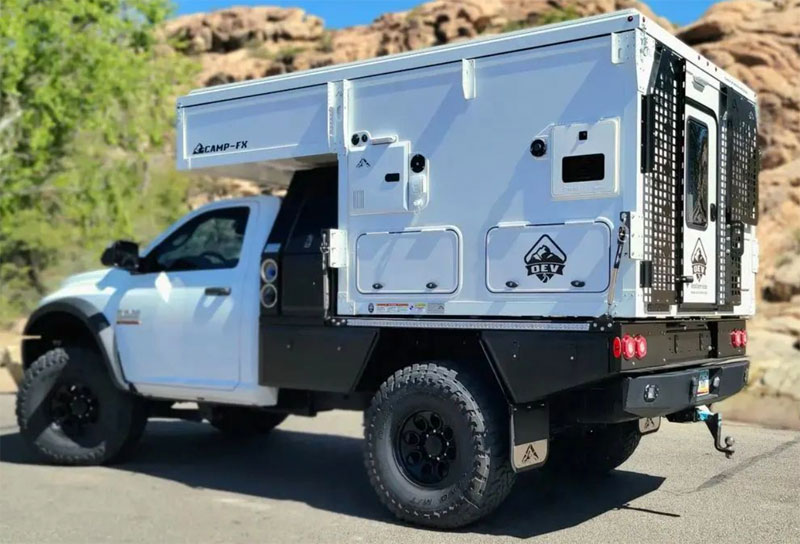 Above: The OEV Camp FX And Aluma Tray HD, check out more photos from Overland Expo on OEV’s Instagram page

Overland Explorer Vehicles (OEV) is debuting the all-new flatbed 2023 OEV Camp-FX at Overland Expo West. This model is essentially a flatbed version of the Camp-X with a number of tantalizing extras. 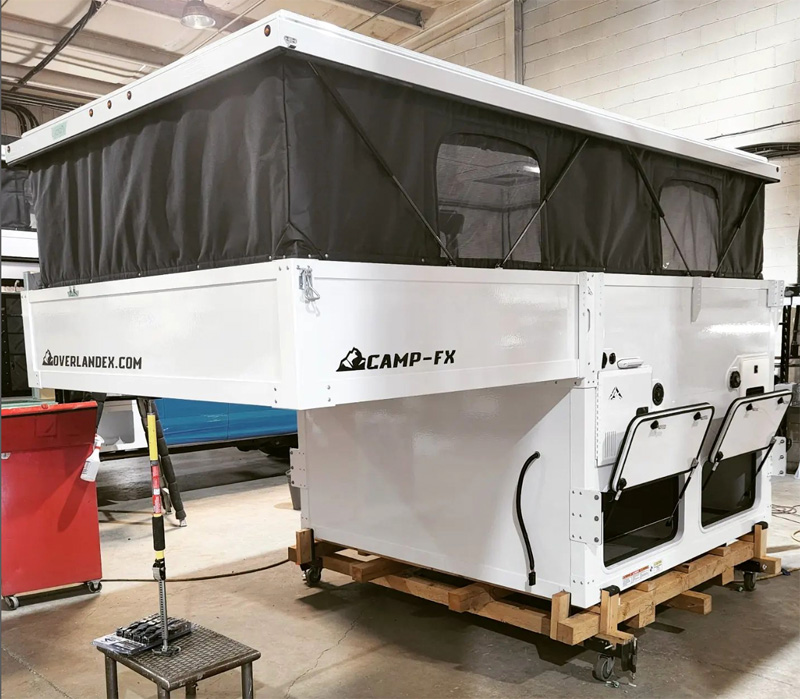 The most notable addition comes in the form of additional storage. The Camp-FX has more underbed storage, underseat storage, and exterior storage made possible by the flatbed approach and other design improvements. The Camp-FX also has a wet bath. 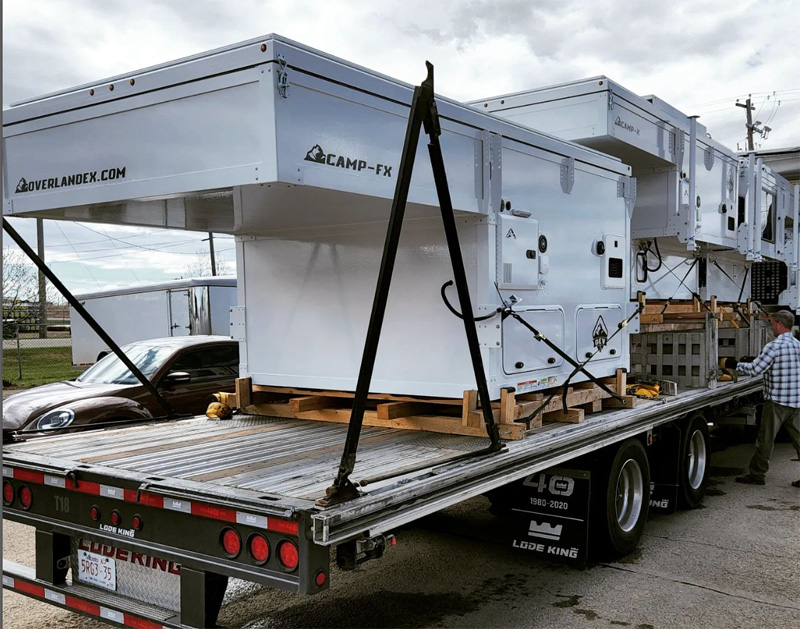 Another OEV product making its debut at Overland Expo West is the Aluma Tray HD. Where the standard Aluma-Tray has a capacity of 3,000-pounds, the new Aluma-Tray HD offers 4,000-pounds and is compatible with cab and chassis trucks. 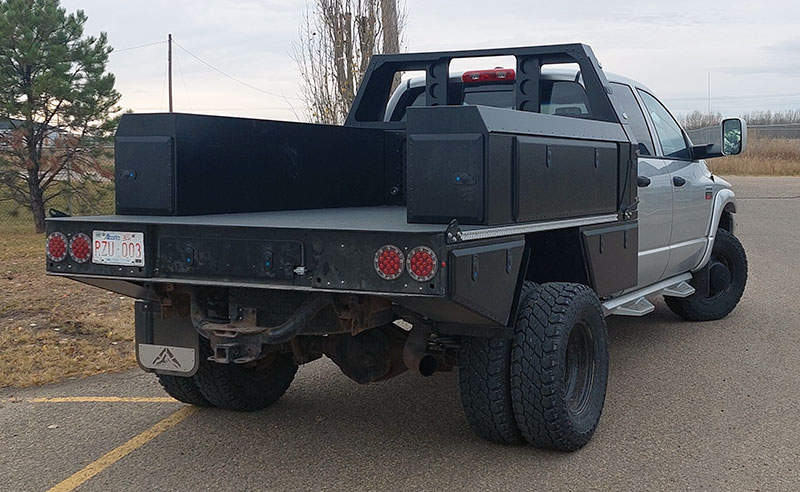 We will have an in-depth announcement of the OEV Camp-FX and Aluma-Tray HD in a future edition of Truck Camper Magazine.

The OEV Camp-HBE flatbed camper and Camp-X slide-in camper will be displayed.

Overland Explorer Vehicles will be showcasing at all four Overland Expos this year; West, Pacific Northwest, Mountain West, and East.

There will be over 400 vendors at Overland Expo West this weekend. Hellwig, Redarc, Battle Born, Rivian and more will be in attendance. Check out the full vendor list.