Northwood Manufacturing offers us a particularly good example of how company culture affects the end product.  Where other manufacturers focus their culture on innovation, technology, or the bottom line, Northwood focuses like a laser on quality.  It’s not that Northwood doesn’t have a focus on innovation, technology, or the bottom line (they certainly do), but the over riding cultural focus at Northwood is strongly bent towards maintaining and improving product quality.

As a direct result of Northwood’s focus on quality, we don’t see a lot of new truck camper floor plan introductions from Northwood each year.  They currently have six floor plans in production, some of which have been improved and refined for over a decade.  More evidence of Northwood Manufacturing’s focus on quality is demonstrated by their multiple levels of truck camper quality control including a final two-hour quality control review for each and every truck camper that leaves the line.

True to form, Northwood Manufacturing has a list of refinements and nice upgrades for their 2014 Arctic Fox truck camper line; stainless steel appliances, an upgraded mattress, a new systems monitor command center, all-LED lighting inside and out, and something called a seat step.  To learn more about these updates, we talked to Donald Cochran, Director of Sales, and Mick Pickler, Camper Production Manager. 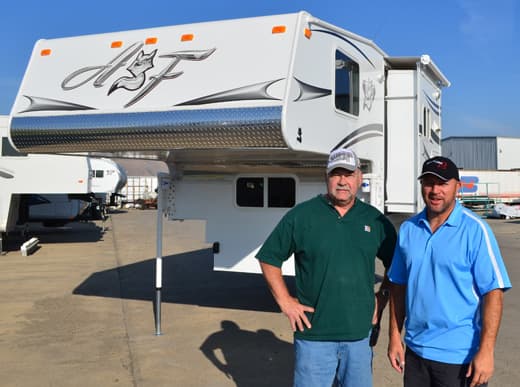 Above: Mick Pickler, Camper Production Manager, and Donald Cochran, Director of Sales, in front of a 2014 Arctic Fox 996

TCM: What’s your position at Northwood Manufacturing and how did you come to work for the company?

Donald: I am the Director of Sales for Northwood Manufacturing.  I started my career in the RV business at Fleetwood Enterprises.  I worked with Fleetwood for sixteen years moving up in the ranks.

When Fleetwood left the travel trailer business, there was a Southwest Sales Manager position available at Northwood Manufacturing.  That’s when I got started with Northwood.  Now I am the Director of Sales and I am responsible for all RV sales at Northwood Manufacturing including the United States and Canada.  I have five District Sales Managers on my team each with a designated territory.

Above: 2014 Arctic Fox truck campers on the production line. Click to enlarge.

TCM: Do you go truck camping? 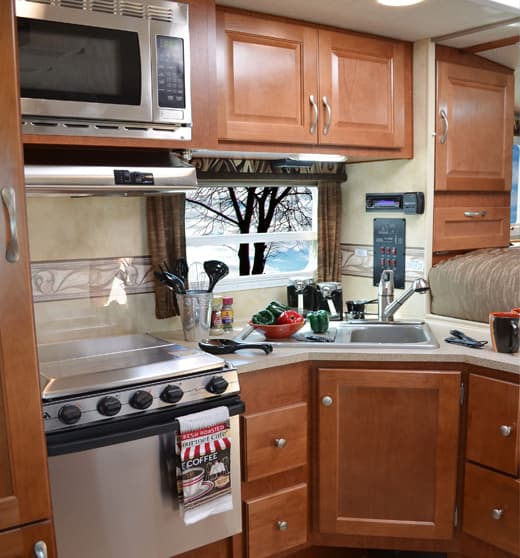 Above: Stainless steel appliances in a 2014 Arctic Fox kitchen

TCM: For 2014, Northwood is announcing some significant standard feature upgrades.  Tell us about the new stainless steel appliances. 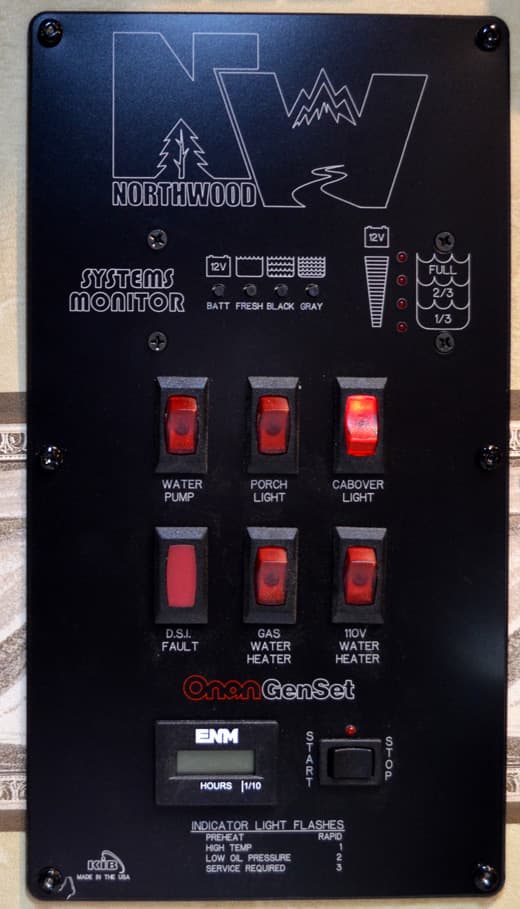 TCM: The new systems monitor command center is a really nice upgrade for 2014.  What brought that change?

Mick: We’ve had the systems monitor command center on our fifth wheel and travel trailer products for the past year and a half.  The systems monitor command center has been well received on those lines so we decided to make it standard on our truck camper line for 2014.  Our customers really like having everything in one area.  It’s very convenient.

TCM: Do you often get ideas for your truck campers from the fifth wheel and travel trailer lines?

Mick: We share ideas between the product and production lines all the time.  A good idea is a good idea no matter where it comes from.  We’re always looking on how to make our products better.

Above: All-LED lighting in 2014 Arctic Fox campers. Click to enlarge.

TCM: For 2014, Arctic Fox truck campers are going all-LED inside and out.  Tell us how you selected the LED interior and exterior lights for the 2014 Arctic Fox line-up.

Donald: We looked at a lot of LED lighting before finding LED lights with a natural warm color.  We further softened the LED light with a frosted lens so the light is not stark.  We like LED lighting because of the significant energy savings when dry camping. 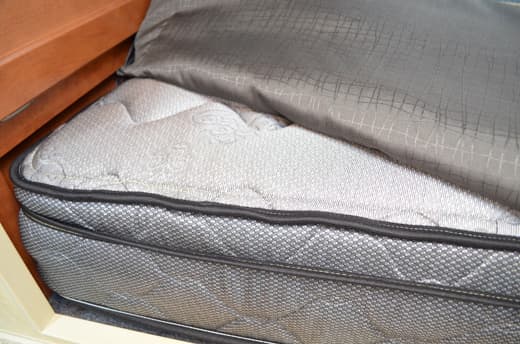 Above: The new for 2014 Northwood Tru Rest mattress

TCM: Tell us about the new mattress standard for 2014 Arctic Fox truck campers.  How is it an improvement?

Donald: That’s another upgrade from the Milestone Edition.  The mattress is a Tru Rest mattress and features a thicker build, more coils, a stronger sidewall, and a pillow top.  It’s very comfortable.

Mick: The mattress is eight inches thick with the topper.  It’s a great upgrade. 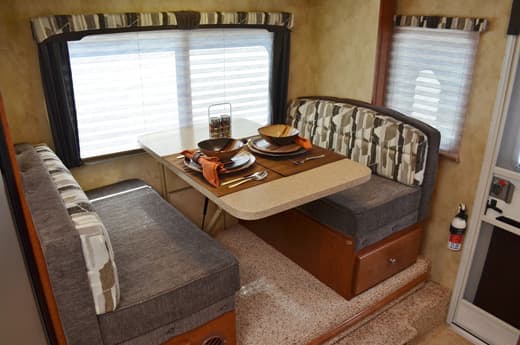 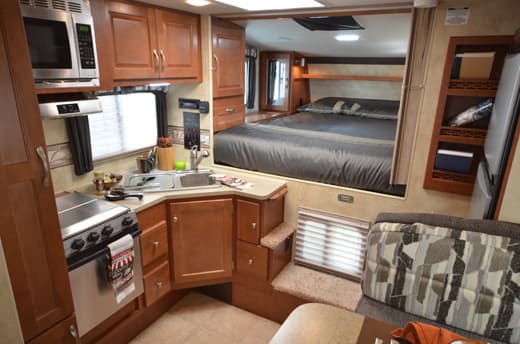 Above: Another view of the Flagstone Mosaic interior in a 2014 Arctic Fox 811

TCM: Are there any new interior fabric choices for 2014?

Donald: Yes, we added Flagstone Mosaic.  It goes well with the new stainless steel appliances and has a contemporary look. 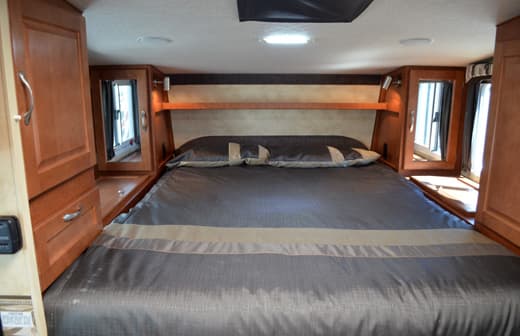 Above: The Flagstone Mosaic interior in a 2014 Arctic Fox 811 overcab

TCM: How are the fabric choices made at Northwood Manufacturing?

Donald: Choosing fabrics begins by looking at hundreds of fabrics for all of our product lines.  For the Arctic Fox truck camper line, we’re looking at rich and classic fabric styles.  An interior design team then combines the colors to create selections.

Then managers then look at these new fabric choices along with our production teams.  We solicit opinions from all the men and women in the both office and production lines to get feedback from as diverse a sampling as we can.  Once a fabric has been chosen, we build a camper with the fabric and everyone in the plant takes a final look at it.  That’s how we measure the response to a new fabric choice. 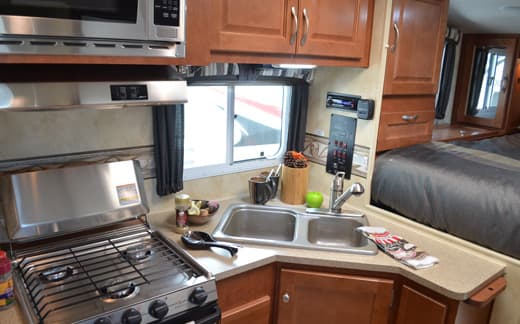 Above: For 2014, all kitchen appliances are stainless

TCM: Have there been any updates to the carpeting, counter tops, or cabinetry woods for 2014?

Donald: We worked on the window treatments and made them more contemporary as well.  When you go in a 2014 camper, they look a little different.  We did keep the same tone of wood from the 2013 models and the linoleum and counter tops are the same.

TCM: For 2014, Arctic Fox is upgrading to roller bearing guides on all drawers.  Which drawers are being upgraded?

Mick: For 2014, every drawer in every Arctic Fox truck camper has roller bearing guides.  It’s an Absolute Northwood quality feature. 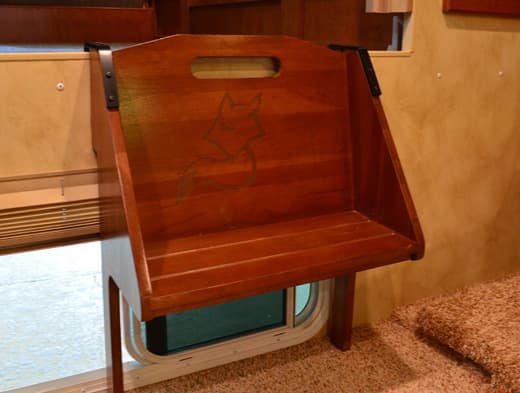 Above: The new for 2014 seat step option

TCM: Tell us about the seat step option.

Donald: The seat step is just that, an extra seat, and a step to aid entry and exit into the cabover bedroom.  The seat step hooks on to the rail in front of the mattress. 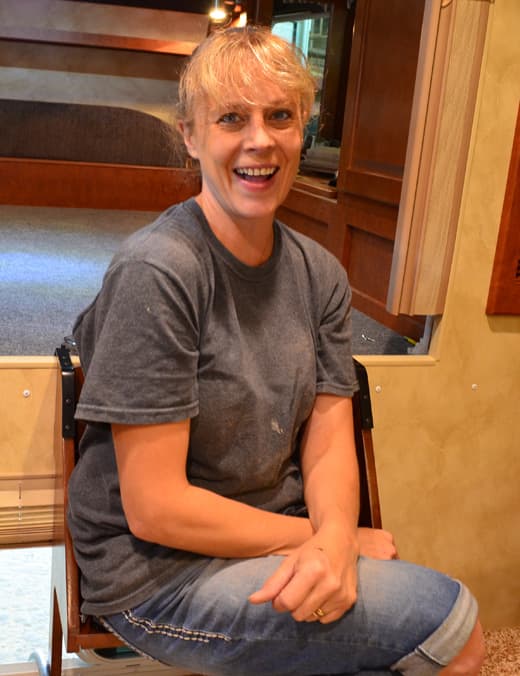 A lot of our customers sit on their mattress or the step below.  This seating position is either too high, or too low.  The seat step puts a seat at the right height and it provides a great mid-step for accessing the cabover.  It’s easy to hook on or off and is an option for every Arctic Fox floor plan.

Mick: Our Product Development Team brainstormed this idea from scratch.  It’s really neat.  We are always looking for ways to improve our customer’s RV experience.

TCM: It appears that Northwood Manufacturing is using a different slide mechanism on the kitchen slide. 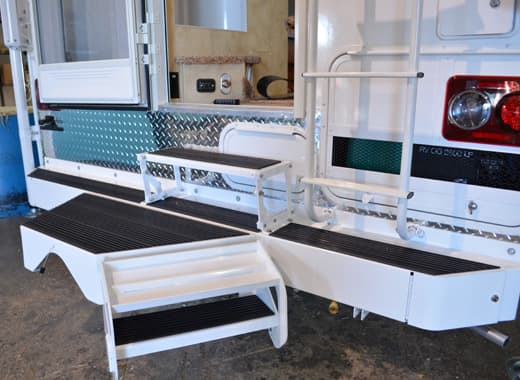 Above: The Fox Landing is a popular option on Arctic Fox truck campers

TCM: Have there been any exterior changes for 2014 models?

Donald: The 2014 Arctic Fox exterior graphics will stay the same. 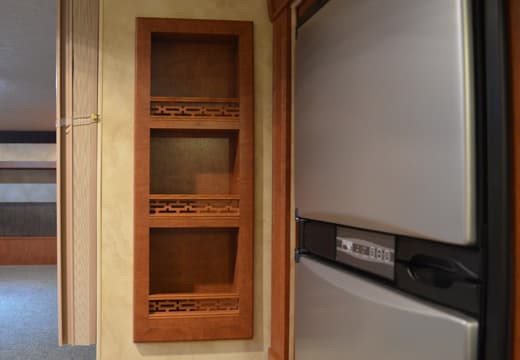 TCM: Is there anything else about the 2014 Arctic Fox line you would like to add?

Mick: We have put a spice rack on all Arctic Fox campers except for the 992.  In the 996, we have two spice racks, one left of the galley slide-out, and one in the bulk head.

We also purchased brighter flashlights for our end of the line quality control station.  We do a secondary quality inspection with the lights off utilizing only flashlights.  This gains us a different perspective in viewing the campers, ensuring we turn out the best product possible.

We get wonderful customer letters all the time.  In fact, we just got a letter from a customer this week who thanked us on the quality of a 992.  I read that aloud to our production team.  They take pride in their work and we make the best camper in the marketplace.

Donald: We have a couple things that are coming right around the corner that we’ll let you and your readers know about.  Stay tuned.

For more information about Arctic Fox truck campers, visit their website at www.northwoodmfg.com.