Welcome to the fourth entry in April’s Medium Mod Contest.  One Medium Mod will be published in every Email Alert in April.  At the end of the month we’ll hold a reader vote to determine April’s winner.  Click here for information about the 2021 Mod Contest, including how to enter. 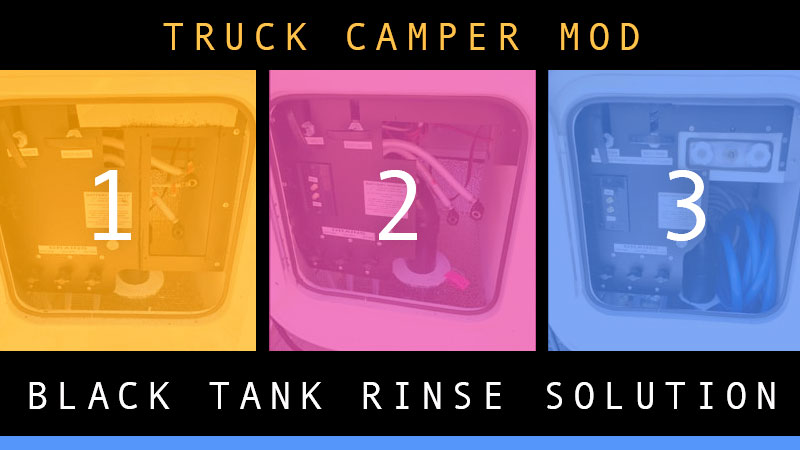 I like using the black water tank rinse capability, but some RV dump stations don’t have hose bibs. This means you cannot easily connect water for rinse.

Many dump stations have just a cut-off hose with no garden hose connector. I wanted a way to use my own onboard fresh water to pump water into the tank rinse inlet port. This way I would not be reliant on what the dump station provided.

This modification requires two things. First, I had to change the outside shower hose fittings so that the outside shower can reach the tank rinse inlet. This was not a problem for my camper since the two are right next to each other.

Second, I had to configure my water pump to run while I’m at the dump station. That was more of a problem because the pump switch is inside my camper. To reach the switch requires that I have both the side and the rear slide open. There was no way I wanted to mess with that while at a dump station.

I had to route a second power source to the water pump. It needed to be one that I could turn on while the slides were in. But, I get in a hurry at times, and did not want to accidentally leave the second power source on. To make sure that doesn’t happen, I bought a bathroom fan timer that I use to turn on the pump. 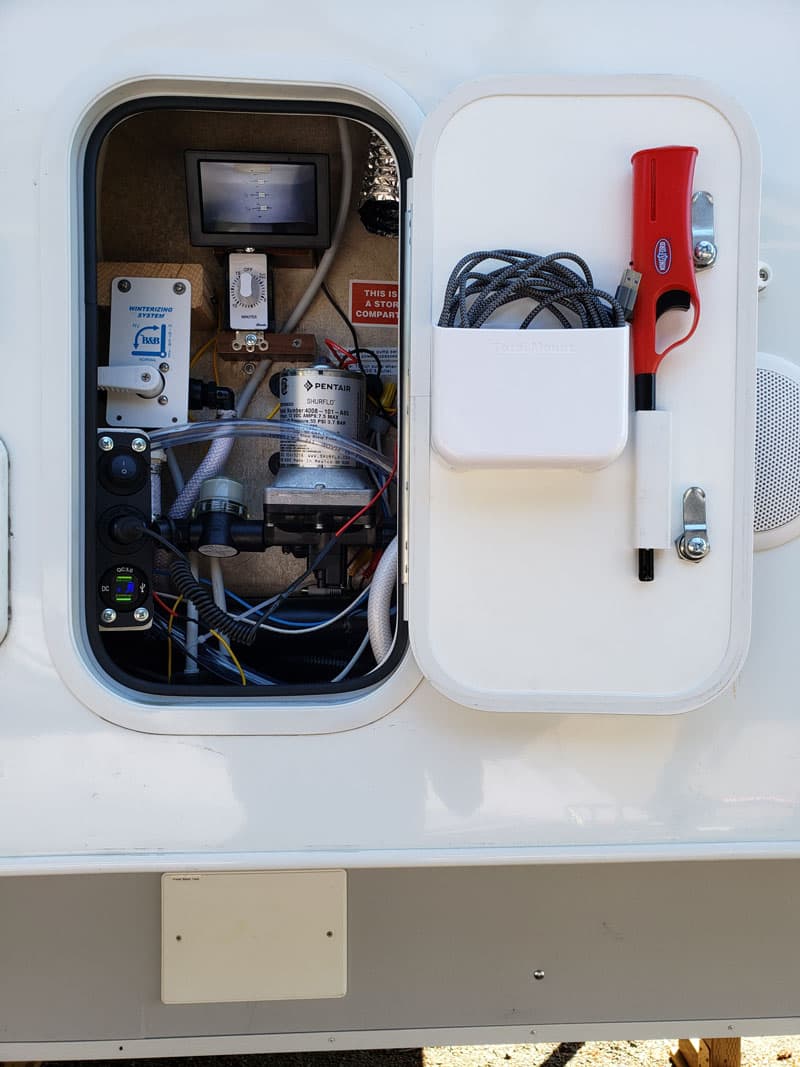 Above: The photo above shows the timer mounted in a side access compartment. This compartment has both the timer and a fresh water tank monitor. This is the same photo I submitted in a previous mod, so if you have seen this earlier in TCM, that is why.

The mod is pretty simple. I use the outdoor shower hose, with added fittings, to rinse the black water tank while at an RV dump that does not have hose bib fittings. Actually, I use it even if they do have hose bib fittings, because it’s just cleaner and easier than having to haul out my hose. The hardest part was finding a convenient 12-volt power source to tap into.

Above: This photo shows the mod I made to the plumbing compartment. This mod is not necessary for the black water tank’s rinse, but it’s how I approached it.  I removed the original shower unit, replaced it with a smaller unit with detachable hose, and freed up a ton of space that lets me store my hose, water filter, and other things in the compartment.  I don’t have a photo showing the connection between the black water tank and this shower, but it’s just a hose. The black water rinse port is just forward of this compartment. 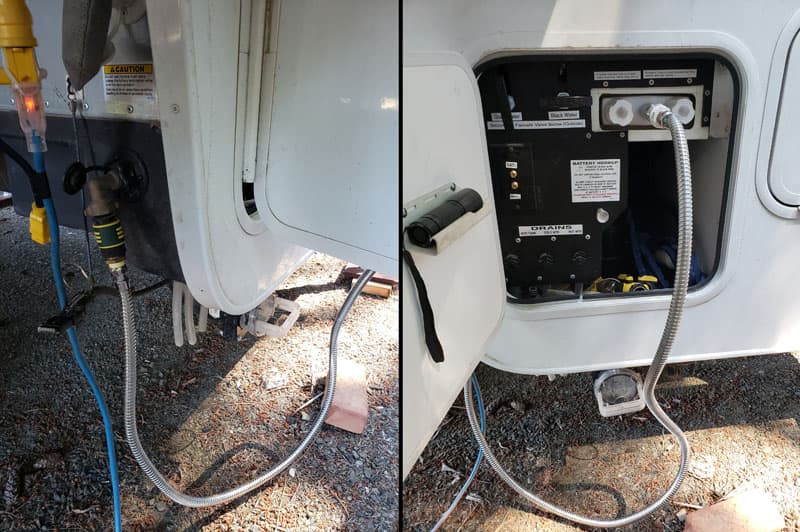 Above: I use quick disconnect fittings everywhere to make things faster and easier.  For those camper configurations that don’t have a slide-out that blocks access to the water pump switch, the timer switch isn’t necessary for them – but in my case, it was necessary.

This mod has worked out very well. While I have used this for only a few months now with my Lance 1172, I had the same mod on my previous truck camper and it worked well there as well.

I made a number of mods to the stock configuration of the outside shower compartment on my camper, but most of those were to make a much larger compartment that would also store my water hose and other wet things. Most of those changes are not necessary for this mod.

For this mod, I had to buy some fittings to adapt the shower hose to a hose bib (about $5), and I had to buy a bathroom fan timer (about $15 on Amazon). It’s a simple mechanical timer that goes for up to an hour, and then turns off.