Mark Hellwig, President of Hellwig Products, has become quite enamored with truck camping since we showed him how fun, free, and versatile the truck camping lifestyle can be during a truck camping trip in 2010. 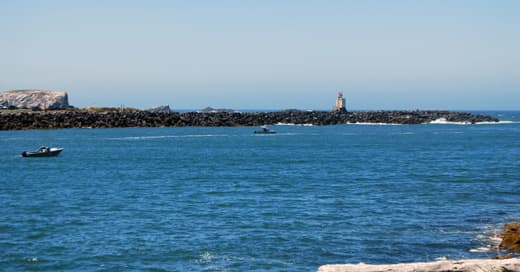 Above: A view of the Coquille River near Bullards Beach State Park

Since that time, Mark and his wife Rosemary have bought their own camper and enjoyed an increasing number of truck camping adventures.  Most recently, Mark and Rosemary joined their family and friends for an annual gathering at Bullards Beach State Park near Bandon, Oregon.  We talked to Mark about this truck camping adventure and asked for pointers about camping at Bullards Beach State Park. 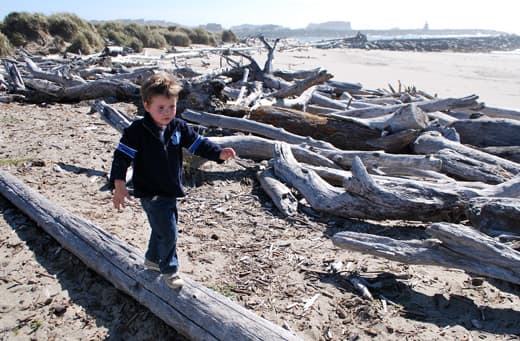 Above: Jensen enjoying the beach in Bandon, Oregon

TCM: How did this latest truck camping trip to Oregon come about?

Mark: My parents, and even their parents, were campers.  I grew up and was exposed to RVs of any kind, from tents to trailers.  It’s natural for us to go camping.  My parents are still RVers.  They’re camping in the Sierra, Nevadas right now. 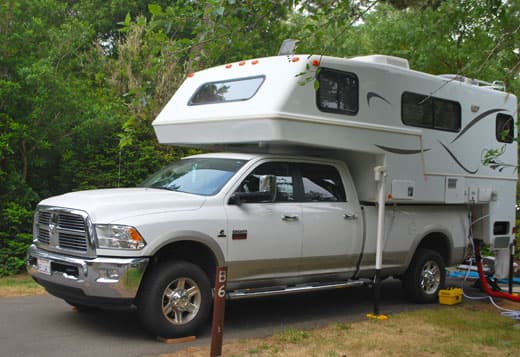 Our folks lured us into a trip to Bullards one sibling at a time.  It has turned into a small family reunion of twenty-five to thirty-five people.  We have had as many as forty people camping together.  This past year there were twenty-eight people.

We always have a great time, and enjoy the family and family friends that show up.   This past year we rented about a dozen campsites.  Our family is locked into the RV lifestyle. 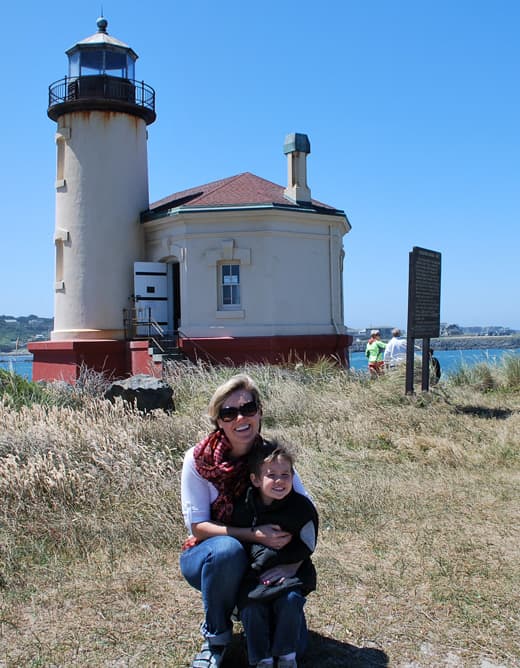 Above: Melanie and Jensen in front of the Coquille River Lighthouse

TCM: What is there to do in Bandon, Oregon?

Mark: There’s a fantastic candy factory in Bandon called Cranberry Sweets and some nice eateries with seafood and local crab.  Bandon also has a lighthouse out on its point, which is a nice attraction.  You can throw a dollar in the kitty and get a tour.

For a nice bike ride, there’s a beach about three miles from Bullards Beach State Park.  From the campground, you’re about one and a half miles north of Bandon, so you can bike into town.

Bandon is also not too far from Coos Bay.  We go up there to do some of the crabbing out of Charlestown.  This past year, during low tide, some of the guys went out to Coos Bay and dug clams and brought them back to camp.

Primarily we go crabbing, mostly in the mornings.  We eat lunch on the boat and then come back after lunch at two to three in the afternoon.  We have large pots to boil the crab in, get the water boiling with Old Bay seasoning, throw in the crabs, and boil them up.

Everyone gathers for dinner and has a cold drink.  We cover the large picnic tables with newspaper, pile the crabs on the table and eat until we can’t anymore.  Then, we’ll roll up the newspaper and actually eat dinner.  There’s no lack of eating indulgence in our camp.

After everyone has had their fill of crabs, I like to take the ones we haven’t eaten and put them on ice.  The next day I’ll put the crab halves on the barbecue, baste them with butter and Old Bay and reheat them.  Then you’ve got buttery Old Bay running down your fingers.  Yum.

TCM: Were there any “couldn’t have done that with the fifth wheel” moments on this trip?

Mark: Bullards Beach State Park is an older campground.  I would never pull my large fifth wheel into there because of the tight turns and overhanging trees.  The sites are not well thought out for large vehicles.  Other than modern day campgrounds that have been built in the past fifteen to twenty years, campgrounds tend to not be designed for larger fifth wheels and motorhomes.  With our truck camper rig, I can slide into any camp spot, which is very convenient. 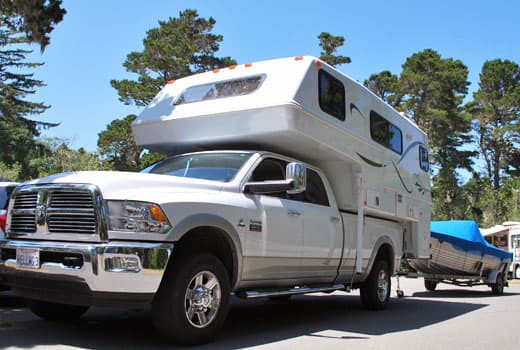 Above: Mark enjoys towing toys when he goes truck camping

TCM: Have you upgraded your truck or modified your camper this past year?

Mark: I made a special step when I tow.  I have the Torklift International SuperTruss as an extension to our hitch.  The camper has a high step requirement because of the basement.

As President of Hellwig Products, I have the convenience of fabrication capabilities.  I came in on a Saturday and built a step system that worked better with my rig.  Now we flip down a side step that mounts to the Torklift SuperTuss.

Mark: We’re going up to Steens Mountain in Southeastern Oregon to boondock with our truck camper rig and Polaris RZR.  We’ll have a fire pit and table.  We’ll be camping on BLM lands southeast of Burns, Oregon.  There’s also town called French Glen that has an old hotel from the 1800s.  That’s a unique town.

Then we’ll go east to Steens Mountain, tour well maintained roads and see gorgeous scenery at 7,000 to 9,000 feet.  As a mountain range in the desert, weather there can be exciting because it changes quickly.  I’ll make another report when I return.