Back in 2007, Truck Camper Magazine modified a 1998 Ram 3500 12-valve Cummins diesel to run on vegetable oil.  Here’s the whole fried story, including a terrible fire and federal conviction.  Don’t do anything suggested in this story.  Not one thing.  Seriously. 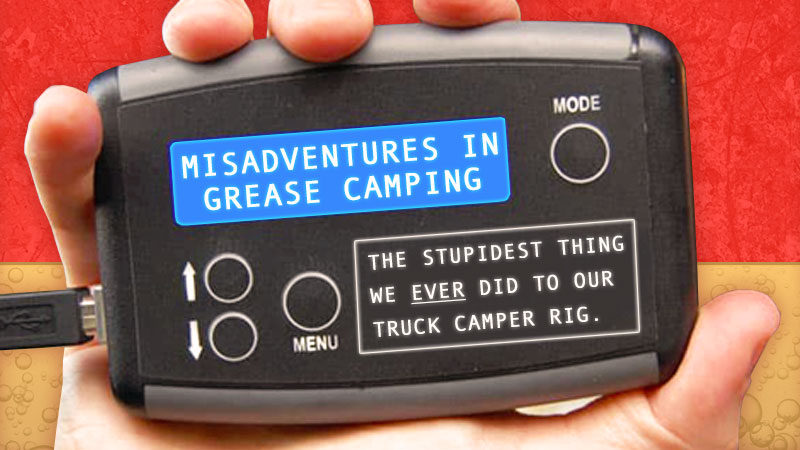 It’s hard to believe that we started this magazine almost fifteen years ago when I was just ten and Angela was in pre-school.  In all seriousness, we have been reflecting on some of the long-lost events from the early days of this magazine; things nearly everyone has forgotten or never knew.  For example, did you know that we fueled our first official truck camper rig on vegetable oil?  It’s a true story, that gets better.

A Nice Fella and Future Felon

Not all diesel trucks are good candidates for a vegetable fuel conversion, but our 1998 Ram 3500 12-valve Cummins diesel was a favored choice.  In fact, we purchased it precisely for that purpose. 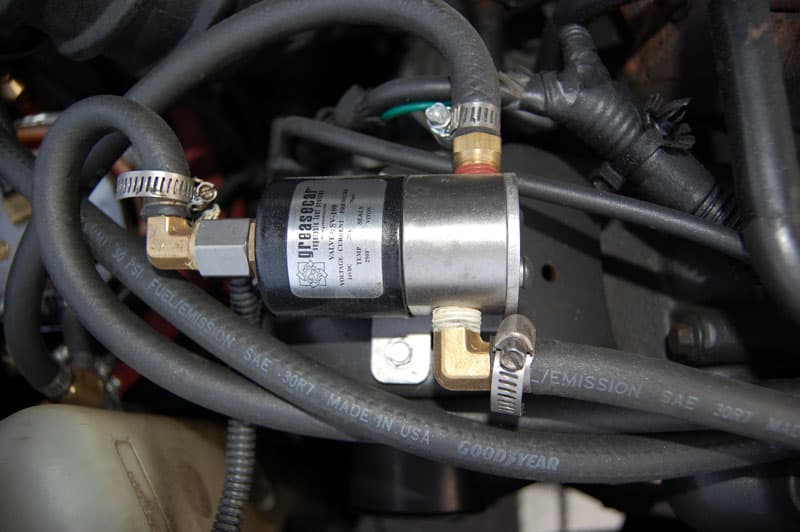 After research, we selected a vegetable fuel system kit from Greasecar and worked with their local recommended mechanic for the installation.  While researching this story, I discovered that this same individual was convicted in 2020 of defrauding federal agencies of tens of millions, filing false tax documents, and obstructing justice.

His bio-fuel processing facility – where our Greasecar conversion took place – literally burned to the ground a few days prior to his conviction.  According to reports, it took sixteen agencies four hours to put it out and it created a very real environmental mess.  I feel like the proverbial clueless neighbor when I think to myself, “He seemed like a nice guy.”

Getting back to the installation, our first Greasecar challenge was figuring out where the 40-gallon auxiliary tank would go.  In most trucks, it would be placed behind the cab in the bed of the truck.  Naturally, this would not work for our purpose since that’s where our truck camper would be located. 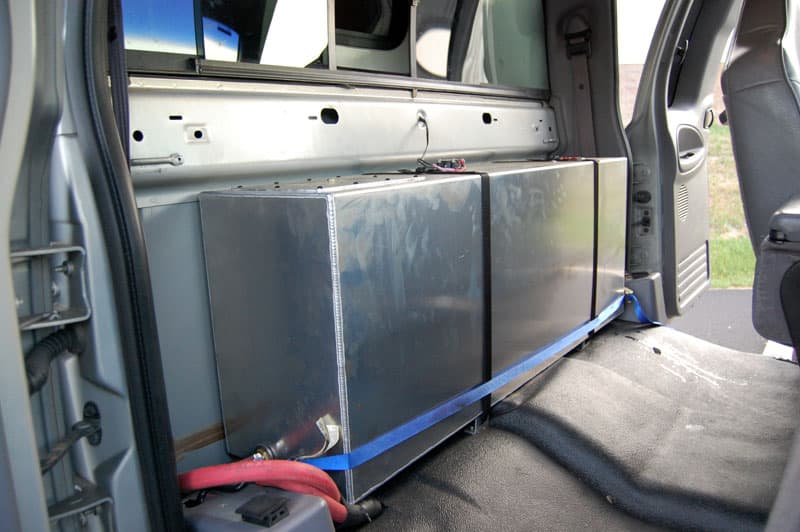 Other possible locations included in front of the wheel wells and in the spare tire area underneath the truck.  These locations would have worked, but they presented various potential issues and costs over the standard 40-gallon tank that came with the Greasecar kit.  Finally we discovered someone on the internet with a tank where the back seat would normally be.  It wasn’t ideal to lose the back seat, but it was a good compromise for us and our friendly installer (and future convict) said it would work just fine.

Then we left our Ram 3500 with the mechanic.  A few weeks later, it was ready for pickup.  After replacing a fuel filter, the Greasecar system worked like a champ.  In many ways, it ran better on vegetable oil than diesel.  The vegetable oil acted like a lubricant smoothing out the rattles we assumed were part of the 12-valve roar.

Once the vegetable fuel is at the proper temperature (and viscosity) you can switch from running the truck on diesel to running on vegetable oil.  When we were ready to turn the truck off, we flushed out the vegetable oil with regular diesel.  Then we could safely turn off the truck. 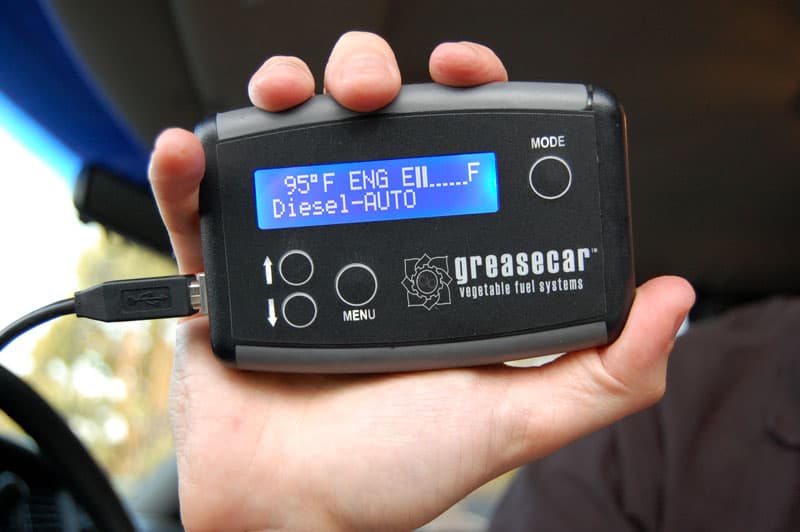 It worked beautifully, but there was catch.  If vegetable oil is allowed to cool in a diesel engine, it will congeal and most likely destroy the engine.  For that reason, we were always hyper vigilant about when we activated and deactivated the veggie fuel system.

So, what was it like to run on vegetable oil?  In a word, boring.  When we switched over from diesel to vegetable oil, nothing happened.  The truck just continued to run.  There was no apparent loss in power.  It was a whole lot of nothing.  The only clue that we were running grease was the mild smell of burning vegetable oil.

Some of you may be wondering if we noticed a hit in fuel economy or power running grease versus diesel.  In full disclose, we don’t know.  Almost from the moment we acquired it, the truck was switched to 19.5 tires which threw off the speedometer and odometer.  In those days we also didn’t hand calculate our fuel economy.  I regret that now.

Insane fact: On that 175-day trip we toured 22 truck camper manufacturers, 35 truck camper dealerships, and 6 truck camper gear companies.  That’s 63 industry stops for an average of 2.5 per week.  We also attended 4 RV shows, all while publishing three times a week.  Tell your children and grandchildren that the American Dream takes work.

My original vision for the vegetable fuel system was to drive cross-country on B100 bio-diesel and waste vegetable oil while visiting the truck camper manufacturers and dealers. Why?  It was a challenge, and it seemed like an interesting content theme for the magazine.  Would I do it again?  Heck no, but hang on to that thought. 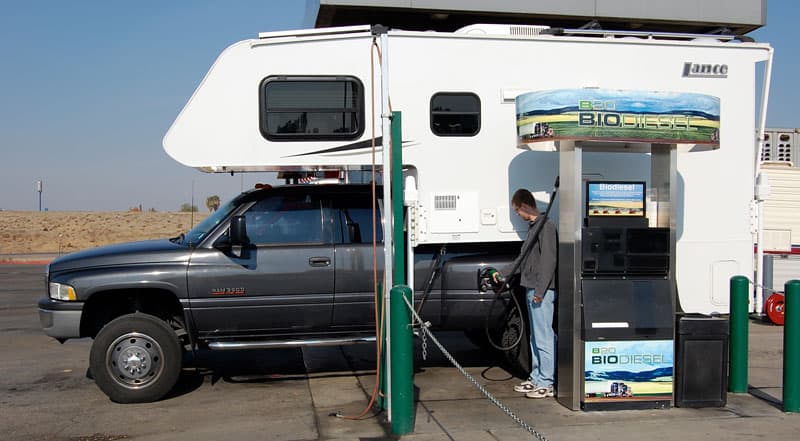 With the conversion installed, our Ram 3500 could use many different kinds of fuels.  In the stock diesel tank we could burn the Ultra-Low Sulfur Diesel (ULSD) from any service station that sold diesel across the United States and Canada.  Also in the stock tank we could burn bio-diesel in its various grades.

Bio-diesel is sourced from renewable plant sources, but has been chemically altered so that it can burn in a stock diesel engine.  It’s normally blended with regular diesel in various percentages.  For example, B20 bio-diesel is 20-percent bio-diesel and 80-percent regular diesel.  If you can find bio-diesel, it’s not uncommon to find B5, B10, B20, B99, and B100 bio-diesel blends.

Of course B100 is 100-percent bio-diesel.  I had hoped to use B100 if we could find sources.  We had online maps showing where the sources of biodiesel were located, but they were often too far off our path to make sense.  In total I think we found B100 a grand total of twice. 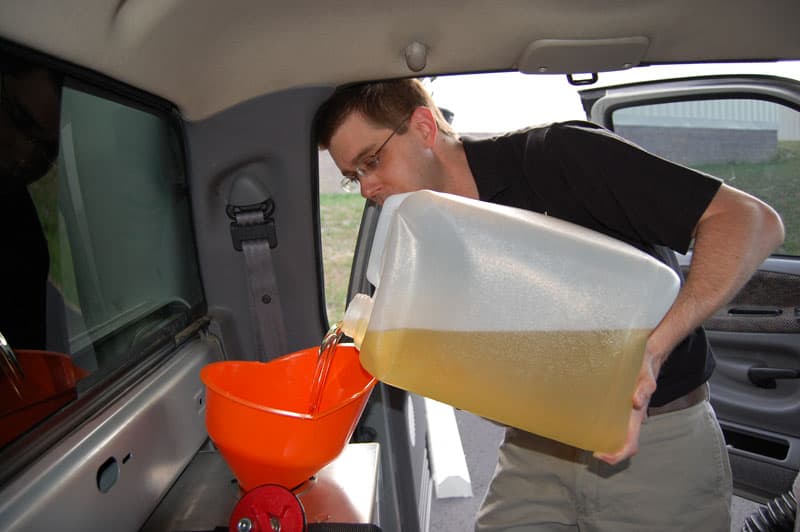 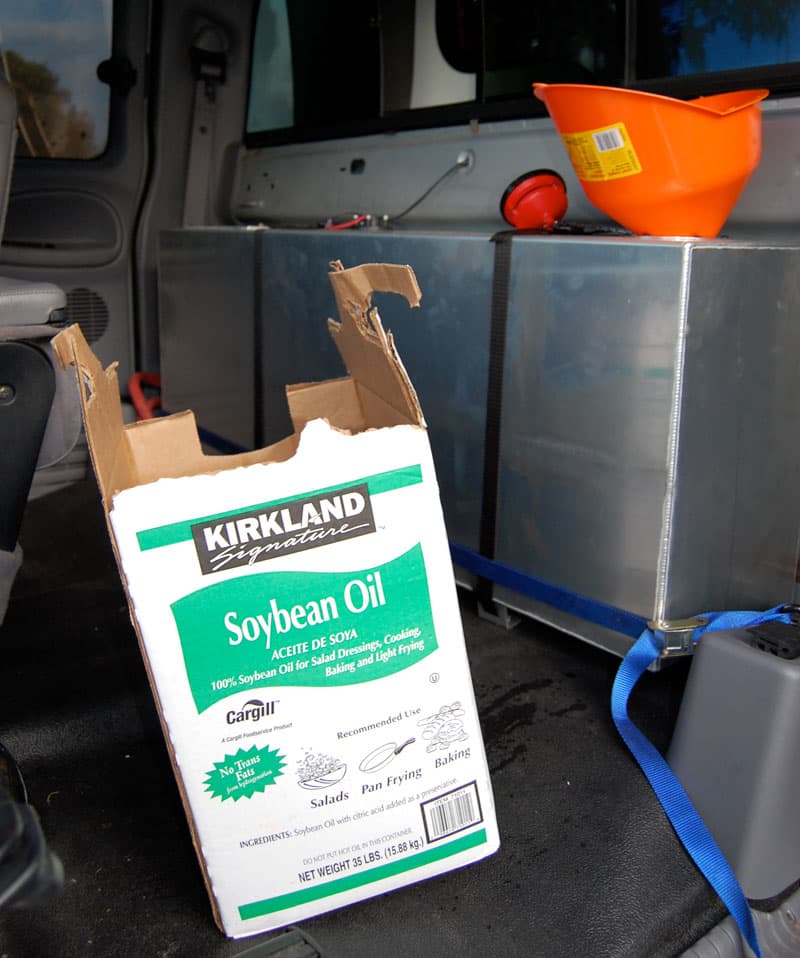 The advantage of burning straight vegetable oil is that it’s free of impurities.  When running SVO, we didn’t need to worry about clogging filters and it was easy to source in quantity from stores like Costco and Sam’s Club.  At the time we (2007), we were paying about $3.31 a gallon for soybean oil from Costco.  More on that in a minute. 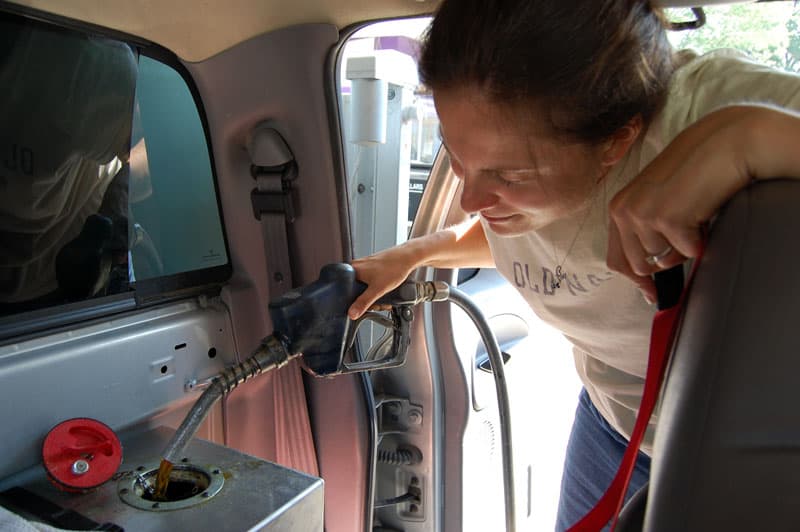 Waste vegetable oil (or WVO) is commonly sourced from restaurants that serve fried foods.  There are other sources of waste vegetable oil such as potato chip factories and industrial food manufacturers.  These oils must be heavily filtered to remove the many food particles that collect after the oil is used.  Once properly filtered, the waste vegetable oil burns as clean as the straight vegetable oil with the added bonus of smelling like last week’s french fries. 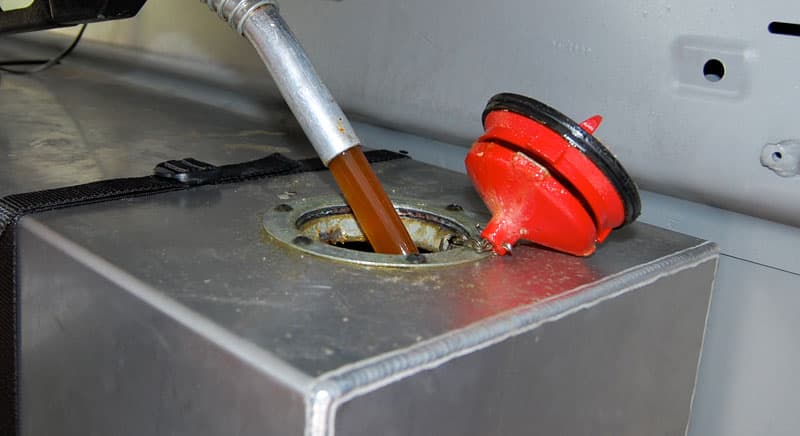 We burned forty-gallons of waste vegetable oil during our first couple of weeks with the converted truck.  The whole time my nose was saying, “That’s food, but I have no idea what kind of food that is.”  It didn’t smell bad, it just smelled like unidentifiable fried food.  The advantage of burning waste vegetable oil is that you can often source it from local restaurants for free, although filtering is a lot harder than it sounds and not all restaurant oil is created equal.

A gallon of vegetable oil weighs about 7.5-pounds.  The bulk containers of soybean, vegetable, and peanut oil at Costco and Sam’s Club are 35-pounds each.  With that we can calculate that a 35-pound container of oil contains about 4.67-gallons of fuel. 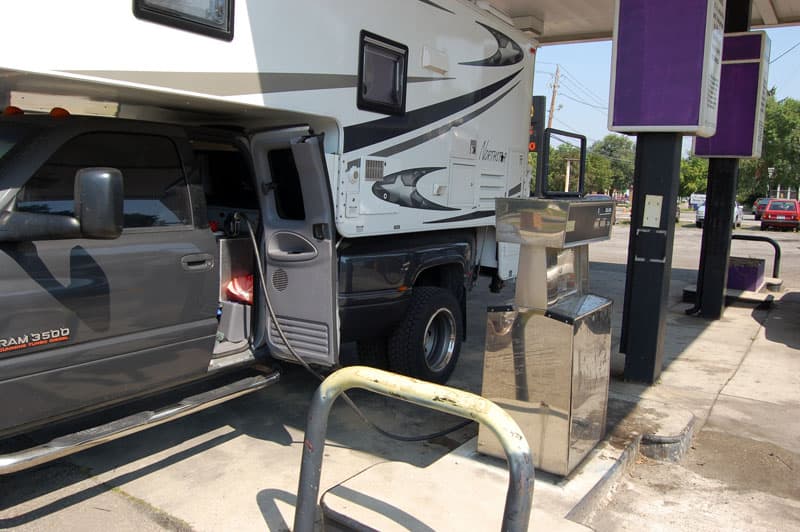 Above: Filling with WVO at Full Circle Fuels in Oberlin, Ohio

We were looking for a reliable source of vegetable fuel for cross-country travel.  If we were going to stay in Pennsylvania (where we lived at that time), we would buy our oil from a local WVO provider.  They charged about $2.00 a gallon for processed waste vegetable oil.  With diesel pushing $3.00 a gallon, it was a deal.  In reality, finding WVO suppliers on the road proved very difficult.  Many only sold WVO to people they knew, and they frequently ran out.  For this reason, we were often forced to resort to SVO or regular diesel.

Would We Do It Again? Absolutely Not.

If I could go back in time and talk to myself about the whole vegetable fuel experiment, I would say, “Don’t do it.”  The reality is we never found anything approaching consistent sources of waste vegetable oil on the road and it wasn’t long before regular diesel was cheaper than the soybean oil we were getting at Costco.  By the time we reached Colorado, we had switched to regular diesel and were so busy touring truck camper factories and running the magazine to care.  We did source WVO a number of times after the tour, but not enough to make sense of it.

The worst part of the whole experience was the damage it did to our beloved Ram 3500 12-valve Cummins diesel truck.  Veggie fuel systems work extremely well and can be economical if you (a) source properly purified WVO, (b) frequently replace the truck’s fuel filters, and (c) keep the truck running.

We were unable to source good WVO and often had to store our truck for weeks and sometimes months over the freezing Pennsylvania winters.  This translated to a truck that became a reliability nightmare.  When we did finally sell the truck, we found a mechanically inclined twenty-something who was extremely excited to have a 12-valve Cummins to work on.  We fully explained the situation, showed him the Greasecar installation, and he still wanted it.  Sold.

Given the considerable upfront cost, fuel sourcing hassle, and resulting truck damage, it would be easy to chalk up the whole veggie-fuel conversion to a mistake, but that’s not how I see it.

As a magazine, part of our job is to try new things – sometimes cutting-edge and expensive things – and report our experiences, good and bad, to our readership.  More recently I put the FlexArmor Spray-On Roof on that list (expensive but awesome, so far).

In the future I hope to push boundaries with lithium battery technology and a few other things we have up our proverbial sleeves.  It’s part of our mission, and it doesn’t always work out.  That’s the deal, and we all learn from it.