This week’s Question of the Week was, “How far from the reaches of civilization have you ever been in your truck camper?”

“You don’t want to break down out here man!  The locals will take your truck and stick it on poles!” – Bob Rushton, on the edge of the outback, NSW Australia

“I love your magazine!  What a great question.  Not sure I have been the farthest in miles, but as you can see from my pictures, I only boondock if I can.  I have been to the Bonneville Salt Flats, the Grand Canyon in the winter, the Racetrack in Death Valley, all over the Southwest, and camp as far off the road as I can.  Two weeks off the grid is the personal record.  My secret is a 50 watt solar panel, three deep cycle batteries, all LED lighting, satellite radio, twenty gallons of extra water, and a good telescope.  I have a 2000 watt generator and never use it.” – Richard Sullivan, California 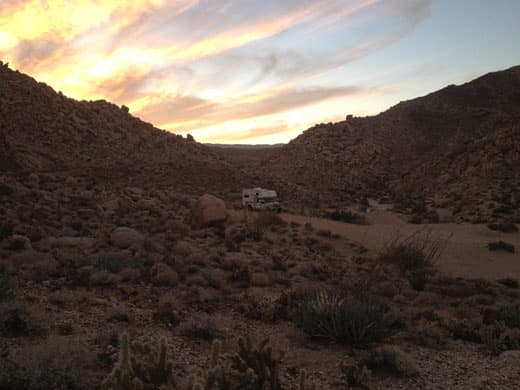 “Anza Borrego Desert state park offers 500 miles of Jeep trails, most of which can be accessed with a truck and camper.  It’s a great opportunity to get off the grid for a weekend.” – Nolan Sturgeon 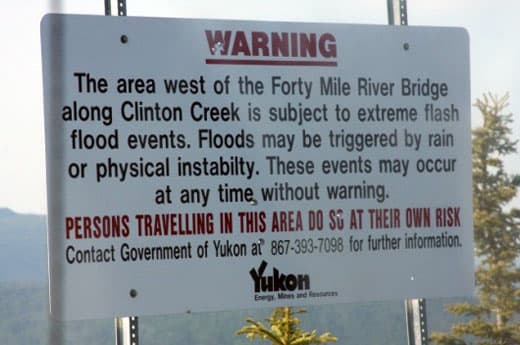 “On a recent trip to Alaska, I traveled a number of remote roads including the Denali Highway, McCarthy Road, and the Haul Road.  However, the Top of the World Highway and then the Clinton Road to just north of Clinton Creek, Yukon Territories, Canada was probably the most remote location.  The sixty mile McCarthy came close, but at the end there were people and the opportunity for assistance.  On Clinton Creek Road it was very remote.  I was 58.2 miles, 3 hours 47 minutes from Dawson City, Yukon, 91.1 miles, 3 hours 38 minutes from Chicken, Alaska, and 168 miles, 5 hours 47 minutes from Tok, Alaska.

Tok, Alaska was the closest town where any real services were available.  As you can see from the pictures, when a road has grass growing on it, it is not well traveled.  It was absolutely worth it since the scenery was spectacular!  And it had a bridge on the road that had been condemned by the Yukon government.” – Mark Turnbull, North Carolina


“Somewhere in Arizona trying to get to the Colorado River, the walls really started to close in on us.  Maybe a smaller truck and camper would be prudent.  We lost a couple of hubcaps down the cliff on the other side.  Lila says I can’t do this anymore.”   – Dave and Lila, New York

“Hi Angela.  Camping in Colorado on my days off is great.  Many areas we go have no cell phone signal.  If you go to the right place below Eleven Mile Reservoir, we even have trouble picking up any signal on our dual band ham radio.  Turquoise Lake by Leadville used to be great, but someone complained and now there is a cell phone tower there.  Perhaps others in this area can recommend an area even further off the beaten path?” – Carl and Donna Isner

“On a trip from Massachusetts, we went to Mills Canyon near Abbott, New Mexico in Kiowa National Grassland.  As the sign points out, no RVs are recommended beyond a point that heads down to the canyon floor and the Canadian River.  It’s a very narrow rough road that drops steeply off.  Mary was scared to death and got out with the dog and walked down about three miles.  It’s beautiful once you get down and the views along the way down are stunning.

We had great weather for the first two days in the 70s.  On the second night all heck broke loose.  It was in the low 30s with a foot of snow.  Getting back up and out was a harrowing drive.  We were slipping and sliding with the wet clay under the snow, but we made it.  I’ve included a few pictures.  Happy truck camping.” – Wayne Koskela, Mary, and Millie the dog

“In Maine, I woke up at 3:00am to the sound of a jet flying over real high.  There was no radio, no cell service, or other human made noise for a day.  Was it ever peaceful.  Amen!” – Allan Chaffee

“It doesn’t seem like much today, but when I retired in 1999 we loaded up our five year old Lance camper onto our new F250 and headed to Alaska for over two months.  We headed north from Colorado through Edmonton and Calgary to Dawson.  Crossing the Yukon River we entered Alaska at Chicken.  From there to Tok, Fairbanks, and north to Coldfoot and finally to Deadhorse.  We were surprised that we only saw one truck between Coldfoot and Deadhorse.  At Deadhorse we had to refuel at an unmanned gas station.  That was probably the most desolate stretch.  The trip was was fairly barren of human life.

From there, we went south back through Fairbanks, Denali National Park to the Kenai Peninsula and Homer.  We went back through Whittier, Seward, then Valdez, McCarthy, Tok again and Haines where we ferried to Skagway.  We took the Caspiar Highway through British Columbia to Heider, Alaska (also pretty void of human life).  Finally we headed back to Colorado with 10,000 magical miles of camper travel behind us!  Live in the outdoors.” – Philip Bolding 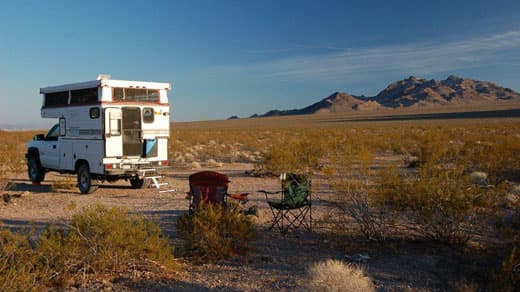 “Hi Angela.  Here’s our campsite just inside the boundary of Death Valley National Park last month.  For us, far out camp spots are the norm, not the exception.  We’ve camped in remote areas of Utah, Nevada, New Mexico, Texas, and California.  Traveling down some lonely trail, hunting for that isolated spot to set up camp is half the fun and affords us the opportunity to discover really cool stuff.  Abandoned buildings, old mines, Indian encampments, and historic artifacts are a side benefit or looking for remote campsites.

One of the most remote, isolated, out of the way spots we’ve camped at was located in the KOFA National Wildlife Refuge in Arizona while photographing big horn sheep years ago.  Twenty miles from pavement in the Castle Dome Mountains, off a two track trail, in July and August, with temperatures above 100 degrees even overnight, no air conditioning, no cell phone reception, and not soul around for days, with beautiful scenery, and only the wildlife for company, is certainly getting away from it all.  We went back over a period of several years during summer in our truck and popup camper to the same spot and never had a problem or mechanical breakdown.

Needless to say, preparation is the key for remote camping.  Having confidence in yourself, driving a well-prepared truck and camper that’s up to the task, extra supplies, and experience in off-road driving and recovery, makes remote campsites fun to discover and worth the effort to get to.  It’s really “Far Out” to camp “far out”.” – Cliff and Susie Kellogg, California