Four Wheel Campers and Torklift International participate in one of the biggest and most capable bug out vehicles ever built.  Don’t miss how this incredible truck and camper practically disappears into a mound of dirt.  Want to bug out?  Check out the Survivor Truck! 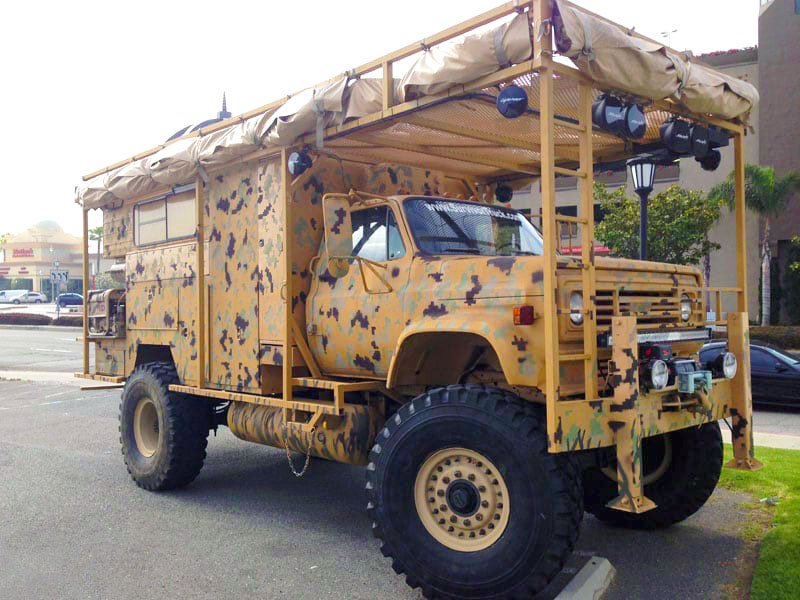 The Survivor Truck Bug Out Vehicle

The Survivor Truck is not a true truck camper rig.  Yes, there is a Four Wheel Camper pop-up camper and a set of Torklift GlowSteps in there, but the camper is not technically de-mountable, nor is the Chevy C70 truck anything that resembles a pickup truck.  No need to write us letters stating that we’ve forgotten what a truck camper is.  We know.

That said, there are a lot of interesting design and product decisions integrated into the Survivor Truck.  Some of these elements are sure to give you ideas about how to make a truck camper better for boondocking, or escaping the apocalypse du jour.

What Is A Bug Out Vehicle?

We have long referred to truck campers as Family Emergency Vehicles, or FEVs.  Just like a FEV, a bug-out vehicle is the ultimate family survival and family support tool.

The Survivor Truck is the brainchild of professional security consultant, Jim DeLoziers.  Jim wanted a vehicle that could quickly evacuate his family in an emergency situation, and keep them safe and comfortable for weeks at a time, no matter what.  When he couldn’t find a vehicle that satisfied his requirements on the market, he made one. 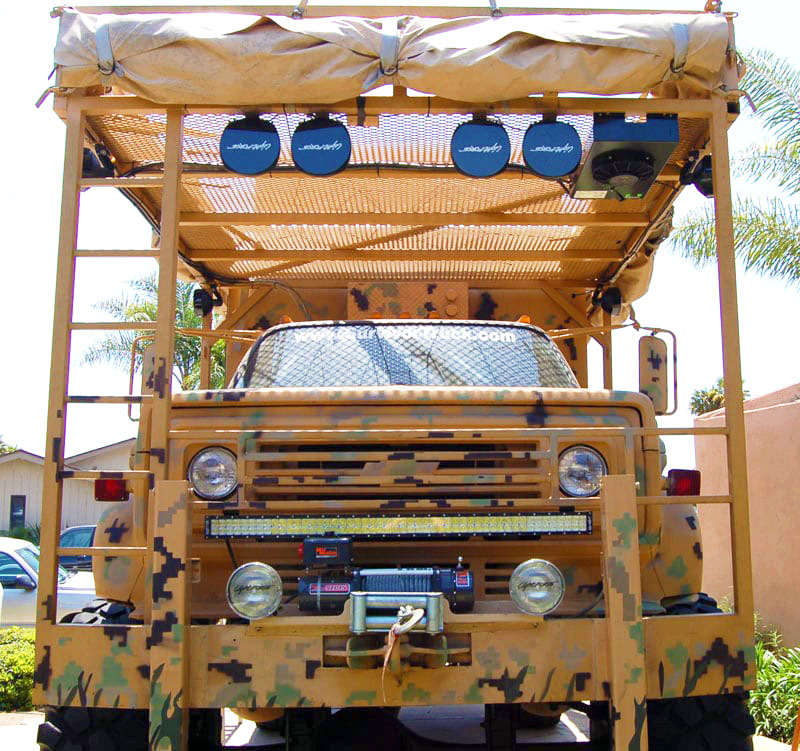 On numerous occasions, I took my crew cab half-ton truck to pick up some ammunition, water, or gear and maxed out the truck’s payload capacity.  Through these experiences I realized it wasn’t enough for my needs. 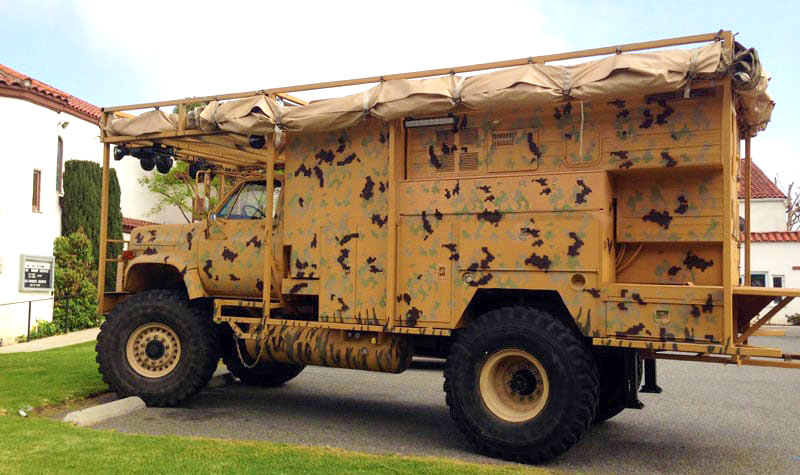 Ammunition Will Overload A Half-Ton Truck

At the time, I ran a gun store.  When I picked up ammunition, I was getting 38,000 rounds and overloaded the truck.  I have since closed the store, but those experiences showed me how limited a half-ton truck’s payload really is.  If I needed to use the truck as a bug-out vehicle, I would have to choose between taking my family, or the needed food, water, and gear.  Clearly, that’s not a choice at all, and I needed a truck with more capacity. 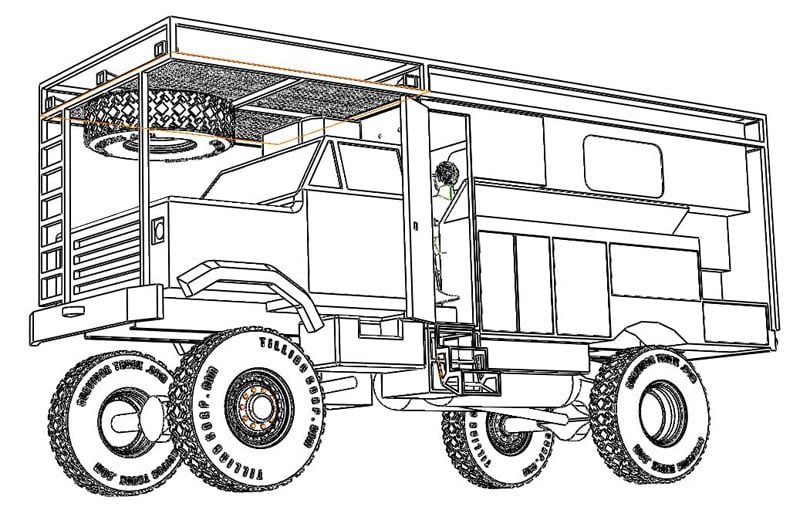 Purpose of the Survivor Truck

When I was designing the Survivor Truck, I was thinking about what my family would need in various emergency situations.  I also wanted to keep my wife and children comfortable.  Those were my personal goals for the Survivor Truck.

I am a professional security consultant.  With that perspective, I designed the rig to accommodate the needs of the security industry, small police and military strike and surveillance teams, the border patrol, and firefighters working wildland forest fires.

“It also features an active faraday cage to protect its occupants and the communication equipment, cameras, monitors, and computers from lightning, EMP, high voltage lines, and electronic eavesdropping.”

The Survivor Truck can be configured to their needs allowing them to get to where they need to go and do what they need to do, unsupported, for weeks at a time.  It’s an all-purpose vehicle platform built to their specific needs.

The Best Vehicle For The Survivor Truck

I could not have afforded to do this on my own.  About 80-percent of the build has been sponsored by approximately 80-sponsors.  One of the first companies to join the project as a sponsor was Tilling Consulting.  They helped me to design and engineer the Survivor Truck and incorporate the products the other sponsors sent in.

Through the sponsorships, we have been able to greatly expand what the Survivor Truck can do.  Our philosophy is that it’s better to have something and not need it, than need something and not have it.  With such a large vehicle platform, we can have everything we could possibly need.

We actually did not specifically seek out this truck.  We were originally looking for a diesel, crew cab, but ended up with a gas, standard cab.

Ultimately it was the right vehicle.  We knew we wanted a multi-fuel vehicle, but they are not as readily available as I had hoped.  Diesel engines cannot run on propane as their primary fuel and propane is ideal.  It can be stored in large quantities and lasts forever.  The Chevy C70 ran on gasoline and we set it up for propane through Carb and Turbo.

The GM 366 Tall Block was very popular for school buses that run on propane so it is a tried-and-true system.  I don’t have it set up for natural gas, but I could.  In the event of an emergency situation, I believe that diesel will be harder to find than gas.  I think propane will be most readily available.

Where the crew cab would have been we designed our own secondary cab area as a command center.  The command center acts as a lock-down bullet-proof safe area in between the truck cab and the camper.  It gives the truck a sleeping and comfort area and people can also work in the command center at the same time.

The safe room is armored with steel and fiberglass.  It also features an active Faraday cage to protect its occupants and the communication equipment, cameras, monitors, and computers from lightning, EMP, high voltage lines, and electronic eavesdropping. 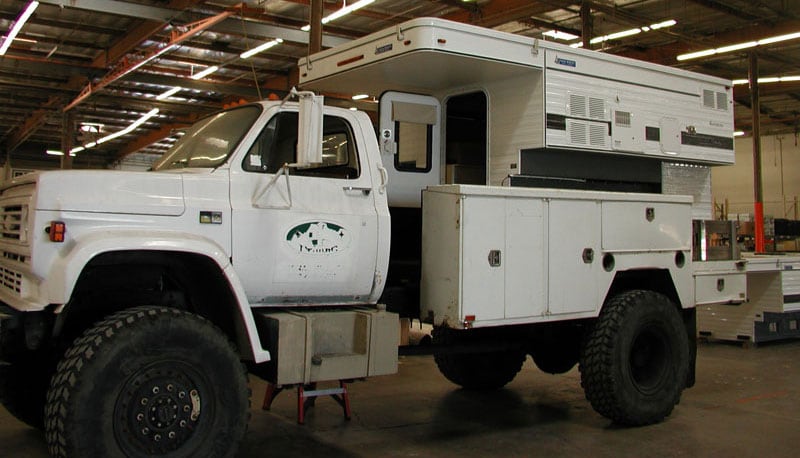 The Best Camper For The Survivor Truck

In order to keep the vehicle signature and center of gravity as low as possible, I went with a pop-up truck camper.  The Four Wheel Camper seemed to be the best fit because they are designed for off-road and off-the-grid four-wheel drive applications.  For the quality, craftsmanship, and off-road design, Four Wheel Campers was the right choice. 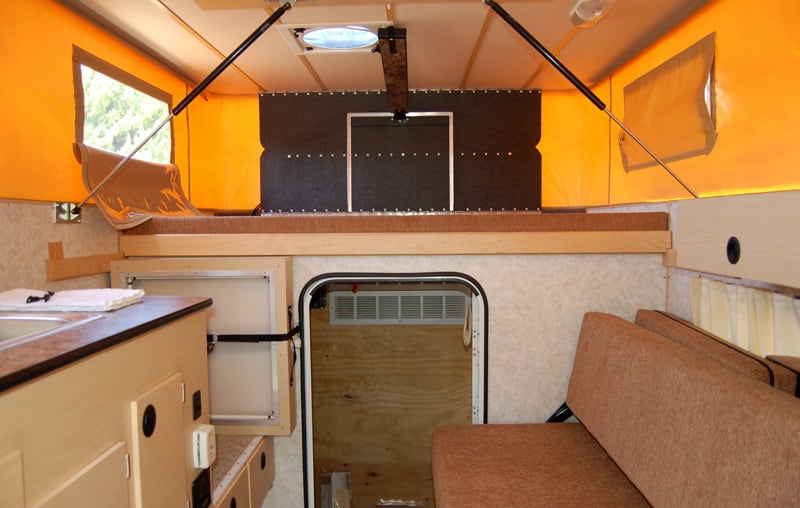 The main custom change is a door in the front and the back of the camper.  They had to reinforce the frame to have egress into the command center.  Four Wheel Campers then had to move the bench from the front and redesign some of the interior because of the second door. 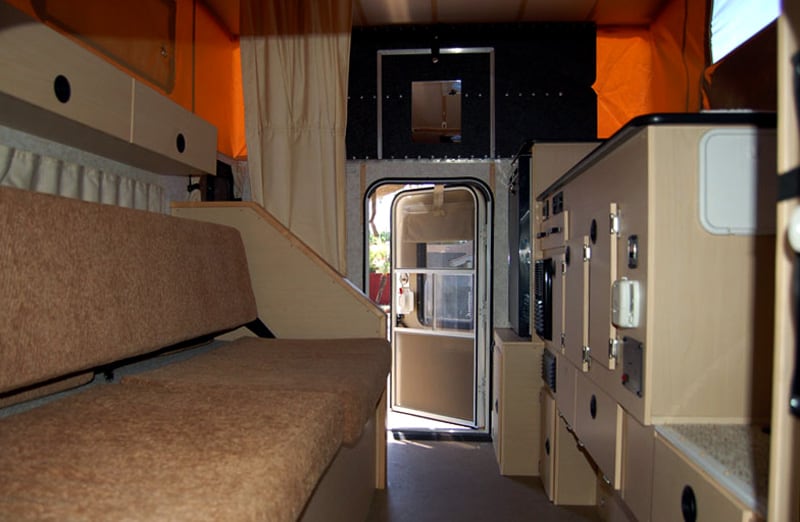 Other custom aspects include removing the fresh water holding tank and moving it to the truck.  The Survivor Truck has a 50-gallon water tank as its primary water tank.  It also has other supplemental water tanks.  The big water tank is actually below the bed of the truck. 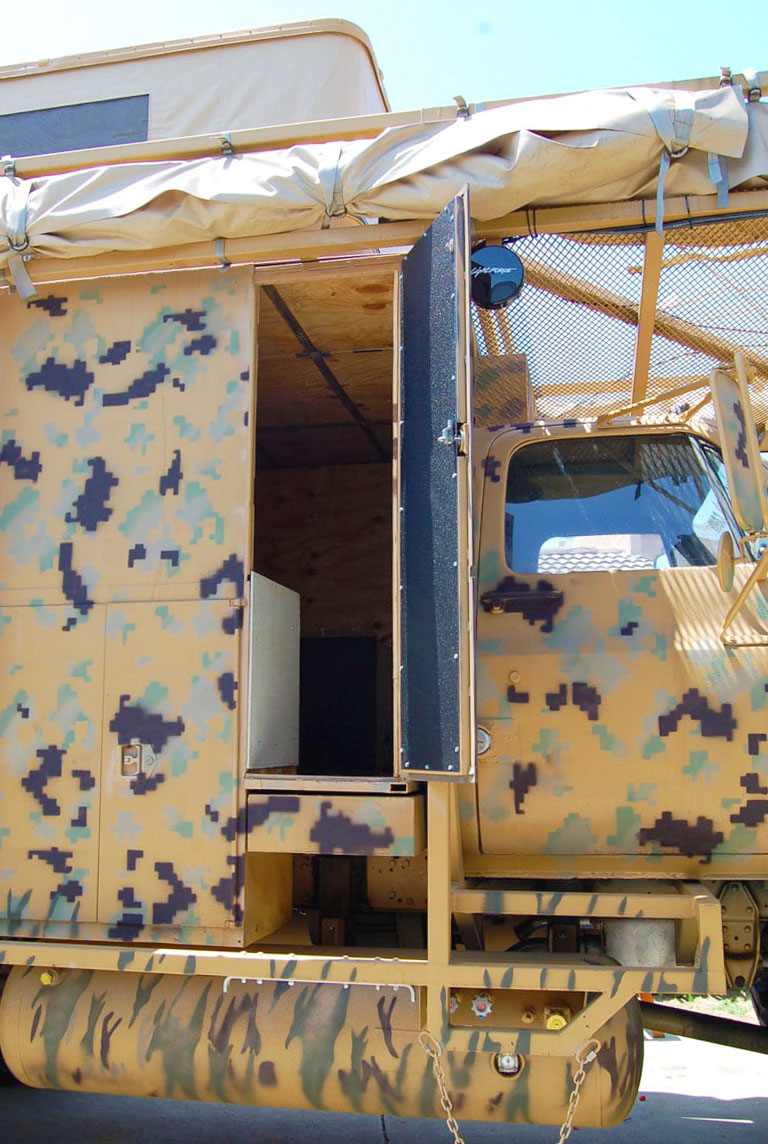 The truck bed has a 16-inch riser system which gives us 38 cubic feet of additional storage under the camper.  There is also a four-drawer system, with two of the drawers being accessed from inside the command center.  The water system is then below that.

We used a standard utility bed on the Survivor Truck.  It’s the same width as a regular truck bed.  The Four Wheel Camper was one of the first things we decided upon.  Once had that done, it was just engineering and fitting things.

Everything in the Survivor Truck was scanned into SolidWorks.  Before we even went to Four Wheel Camper, we had the Keystone in SolidWorks and made sure it was going to fit.  We designed the utility bed around that, and then the bed was modified after the camper was on to get even more storage. 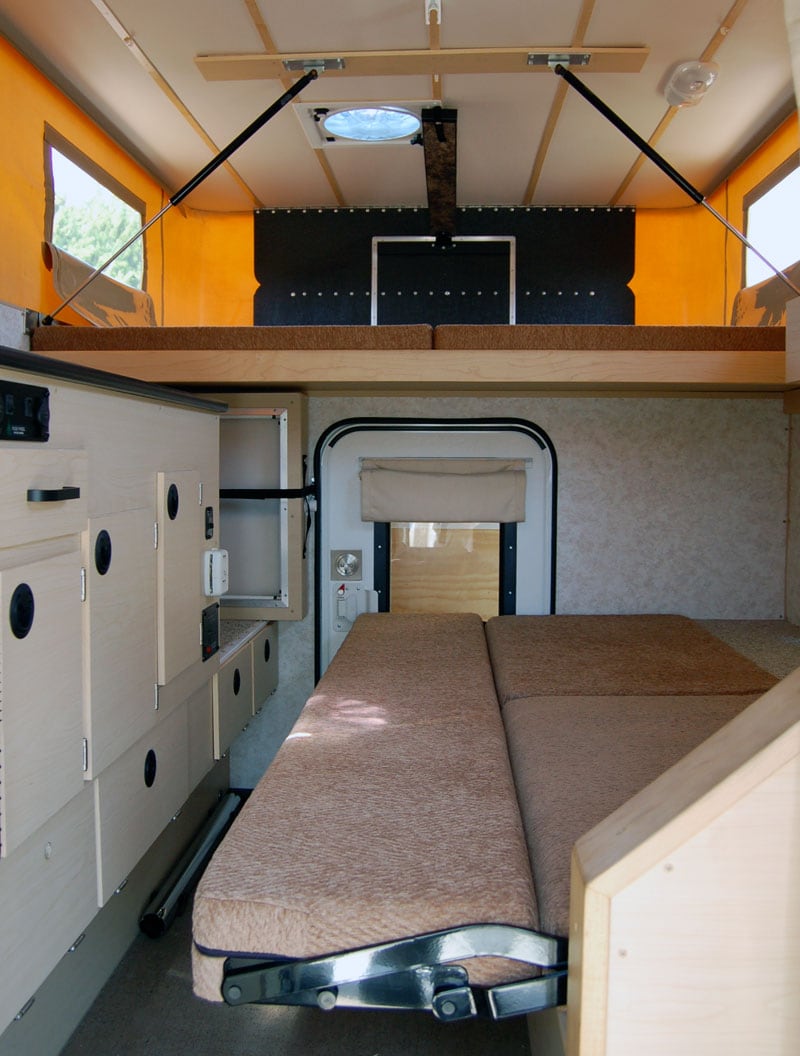 Four Wheel Campers put just about every option they offer on this camper.  We have the cassette toilet, refrigerator, two-burner stove, sink, water heater, and a water pump.  The shower is a shower pan with an attachment, curtain, and drain.  We have the queen bed extension, air conditioning, heat, and solar on the roof.  We essentially have everything they offer, including the cold weather soft wall insulation pack.  They did it right. 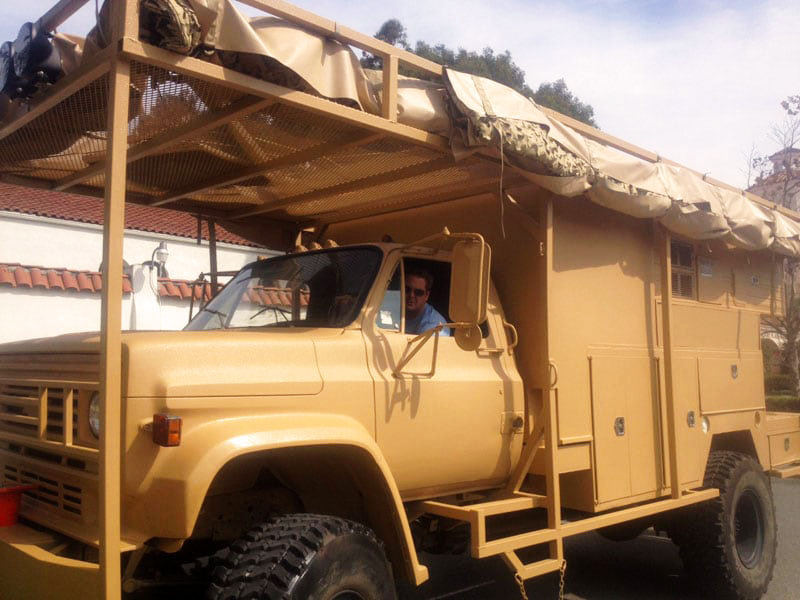 Modifications to the Four Wheel Camper

The camper is completely coated in Rhino lining, but is otherwise stock as it came from the factory.  We are adding an entertainment module at some point.  The camper is permanently bolted to the truck.

Initially we were going to build our own camper, but with the attention to detail Four Wheel Campers offers, there was no need.  This camper works perfectly for what we needed. 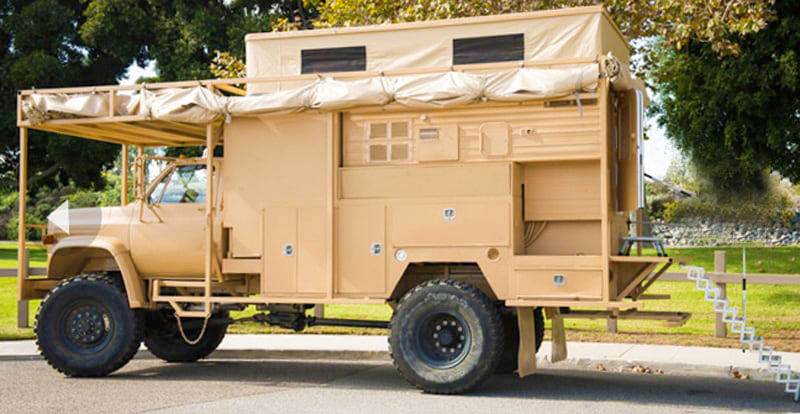 Torklift Glowsteps on The Survivor Truck

We contacted Torklift International and they were happy to work with us.  The Torklift GlowSteps were a simple application that I installed myself.

Since that first GlowStep installation, the vehicle was lifted 4.5-inches and taller tires were added.  With these changes, the rig is actually a foot taller than it was originally.  To add an additional foot, Torklift built me a new GlowStep system.  They’ve been terrific.

During the SEMA Show, I would be busy talking to someone and there would be two or three people standing on the GlowSteps at the same time.  There have been thousands of people up and down those steps at shows.  I go up and down all the time with heavy stuff.  I’ve overtaxed those steps on dozens of occasions and they’ve survived.  Torklift’s product is great.

There’s actually two sets of GlowSteps on the Survivor Truck.  The second set is on the side leading to the command center.  The rear GlowStep system also features the GlowGuide handrail system.  The Torklift GlowSteps and GlowGuide have taken a lot of abuse and they’ve performed flawlessly. 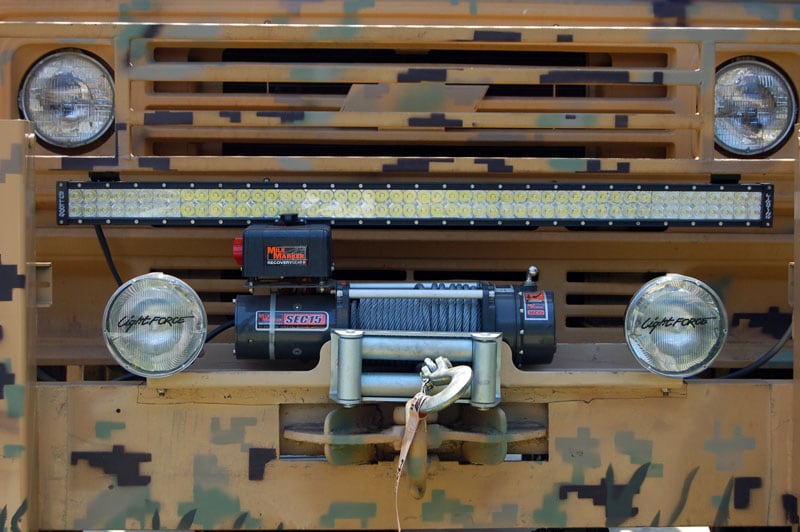 It’s very close to being complete, but there are some things left.  I am getting a new air conditioner from Dometic for the command center.  I am also re-doing the entire dash of the truck with VDO Gauges and I want to improve the surveillance system.

Taking a step back, the Survivor Truck has already exceeded my expectations.  In terms of the vehicle itself, it has surpassed what I wanted it to accomplish.

Total Cost of the Survivor Truck

If I was to build one for someone, it would cost less than it cost me because I have done all of the engineering and fabrication.  The total cost depends on the chassis we start with.  If you start with an older vehicle, like this one, you can find a truck for about $10,000 to $12,000.  Then the whole rig would be around $225,000.

If you want thermal imaging and night vision, it would be about $300,000, depending on the level and sophistication.  If you want an armored vehicle, you need a permit.  It’s really all up to how big and how bad you want to make it. 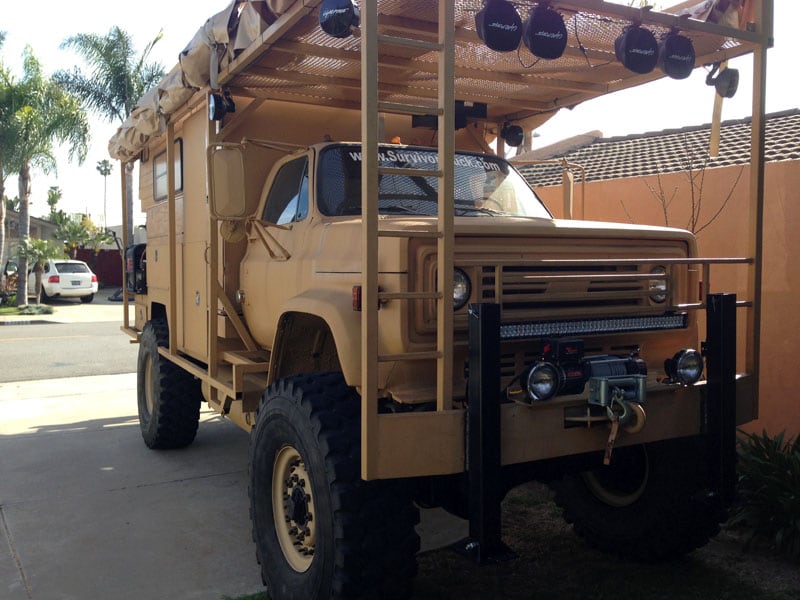 It is an event to take the Survivor Truck out.  I have to be careful when I’m driving as people will step into the road to photograph or video the rig.  Honestly, it’s not a big deal when you’re camping.  We go camping like everyone else, we just have a cooler camper.

Security During An Emergency Situation

Security is not a concern.  It is what it is.  If the rig is moving it’s fine.  When we are stationary, we have cameras and camouflage nets.  We throw down the equalizer system and the camo nets and we look like a mound of dirt in the background.  We become almost invisible.  Even if someone sees us, we look like a hardened target.

My family does go camping in the Survivor Truck.  It’s also a great camper.  This extreme rig has forced me to meet people who introduce me to other people that I need to meet.  It’s been a great experience.