For over sixty years, there’s been a strong correlation between truck campers and boating.  Even today, 38.3% of Truck Camper Magazine readers checked that they tow a boat behind their rig for the 2016 reader survey.  Truck campers and towable boats are like tie-downs and turnbuckles, dump stations and hoses, and cats and cabovers – clearly meant to be together.

Given the long history, and the unbridled ingenuity (AKA mad mod-making mentality) truck campers often display, it’s no surprise that a few trailblazing fellas over the years have commingled truck campers and boats to make something of a hybrid; part truck camper, part boat, and bit nuts. 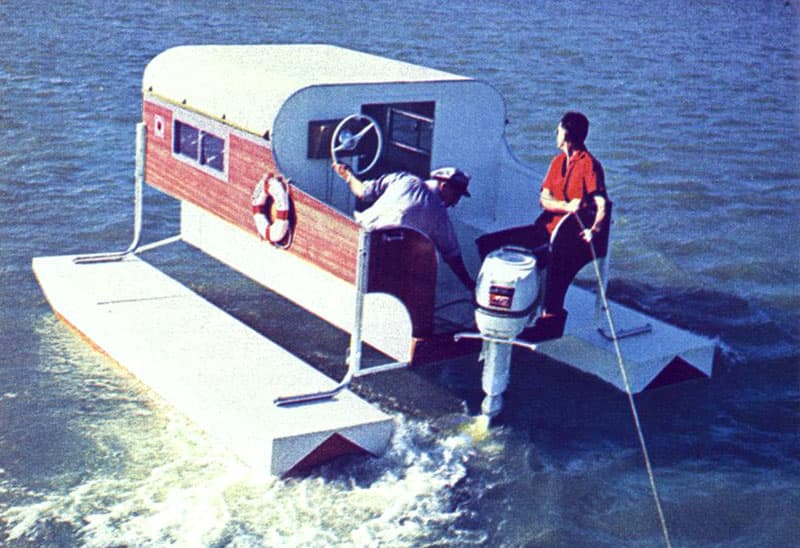 We first reported about this crazy-but-true amphicamper concept seven years ago after coming across a September 1960 article in Ford Times titled, “Amphibious Pickup Camper: Recreation Unlimited In The West”.

The Ford Times article had three photographs of a Cee-Camper, a “Pontoon Sports Body” truck camper by Copeland Engineering.

As the name implies, the 1,000-pound, 10-foot Cee-Camper mounted onto a pickup truck in the same manner as a standard truck camper.  What was anything but standard were the two 12-foot by 30.5-inch by 14.5-inch wood and fiberglass pontoons overlapping the length of the Cee-Camper fore and aft.

According to the Ford Times piece, these pontoons featured double floors and nine airtight flotation compartments. 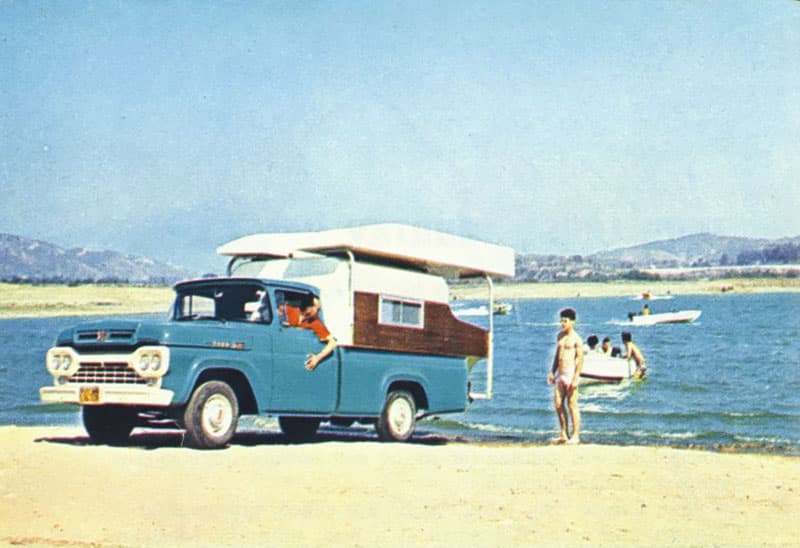 The owner would then push the Cee-Camp into the water, drive the truck off the loading dock, and climb up the pontoon “gangplanks” for a cruise. 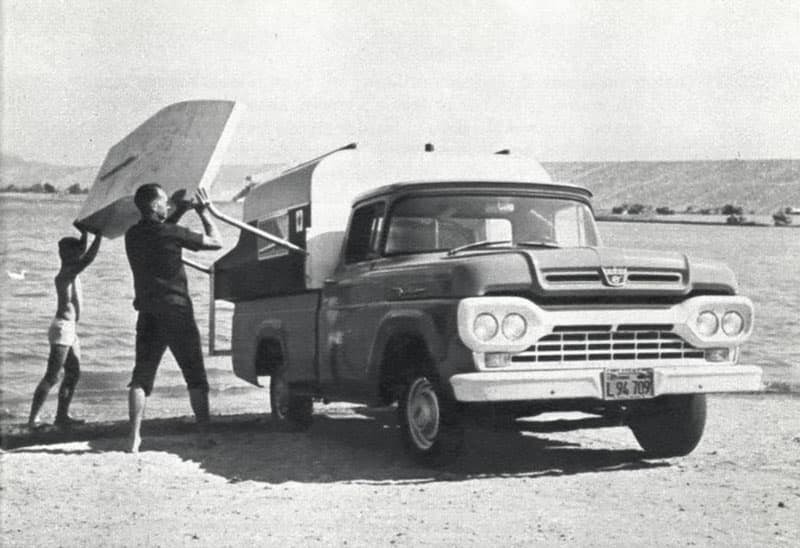 The Cee-Camp featured a 40-horsepower outboard motor and could do 30 miles per hour (25 knots) to support water skiing.  That’s right folks, our truck camping forefathers were literally water skiing from their truck campers 56 years ago.  And we think we’re so cool with our slide-outs and solar panels.  Ha!

For de-mounting the Cee-Camp on dry land, the pontoons were lowered into their sea-going position on 5-inch blocks, and secured with pins.  The blocks raised the unit enough to allow the truck to drive out from underneath the Cee-Camp, and subsequently load it again.

Once re-loaded from land or sea, the pontoons would be swung onto the roof of the camper and, again, secured with pins.  When the blocks were stowed, turnbuckles affixed, and truck-to-camper umbilical cord connected, the Cee-Camp rig was ready to hit the road; waterway to highway. 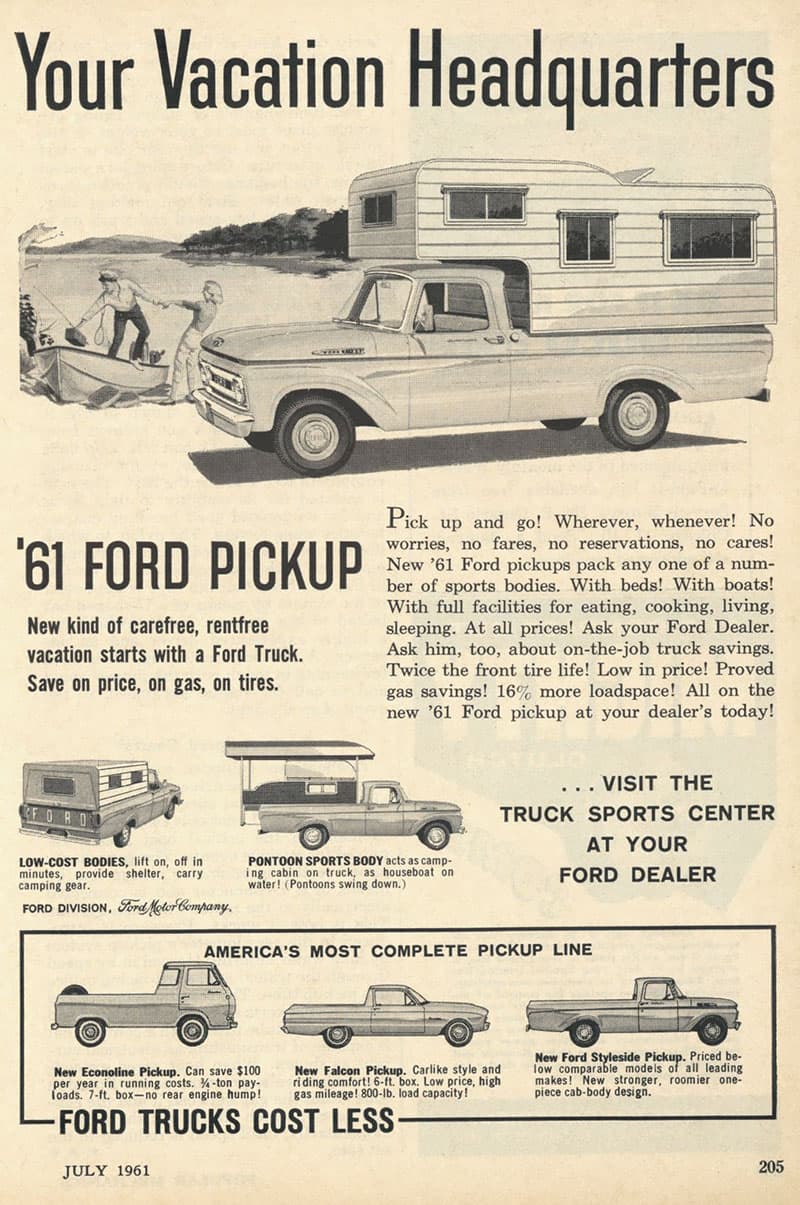 While there is little evidence that the Cee-Camp was a commercial success, the 1960 Ford Times article does explain that Copeland Engineering built five examples of the amphibious unit.

Perhaps even more enticing, a 1961 advertisement for Ford Motor Company shows the “Pontoon Sports Body” along side of other truck camper models stating that the unit, “…acts as a camping cabin on truck, as houseboat on water!”  If anyone knows anything about the fate of the Cee-Camp, or knows where one is, please let us know.

The Return of the Amphicamper

Honestly, we thought the Cee-Camp was something of an anomaly, a 1960s one-hit wonder like Mark Dinning’s “Teen Angel”, The McCoy’s “Hang On Sloopy”, and We Five’s “You Were On My Mind”.  Well hang on, Sloopy!   The amphicamper is back – sort of.

This past October, long time reader John Tardif sent us a YouTube link to an episode of Flipping Ships, an Animal Planet television series hosted by singer-songwriter Edwin McCain.  In the 1990s, Edwin climbed the US Rock and Adult Contemporary charts multiple times including, “I’ll Be”, “I Could Not Ask For More”, and “Solitude”.  As it turns out, Edwin is also owns a boat restoration company called Boats Have Souls.

In the 1984 cult movie Buckaroo Banzai, the main character, Buckaroo (played by Peter Weller), is an impossibly multi-talented phenomenon.  As the movie opens, Buckaroo is a neurosurgeon intensely focused on a brain surgery.  A few minutes later into the film, Buckaroo is a test pilot crawling into a jet car on the Utah salt flats.  That night he’s on stage as a famous rock star singing to a packed house.  Later it’s revealed that he also happens to be a physicist.

In my life I have met a handful of people with similar resumes.  These annoyingly multi-talented and impossibly driven individuals can seemingly do anything they put their minds to.  There are at least three TCM readers that fit this description, all three of whom I have personally informed of their Buckaroo status.  One now proudly wears a Buckaroo Banzai patch.  Perhaps I shouldn’t have told him.

Based on his chart climbing musical abilities, entrepreneurial success, mechanical skills, and talent as a television host, it would appear Edwin McCain is another Buckaroo Banzai.  Add Buckaroo Banzai to your Netflix cue, Edwin.  You’re a Buckaroo. 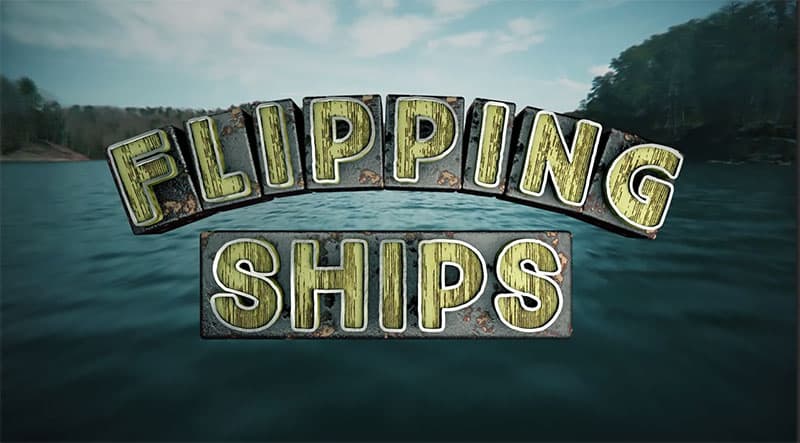 For each episode of Flipping Ships, a restoration team salvages a long neglected boat and turns it into an over-the-top, one-of-a-kind watercraft creation.  Think of it as Pimp My Ride or Overhaulin’, only for boats.

None of this would make the fine electrons of Truck Camper Magazine if it wasn’t for the Happy Camper episode.  For this particular episode, the Flipping Ships crew rescued an Avion truck camper and turned it into an incredible hot rod mini-houseboat. 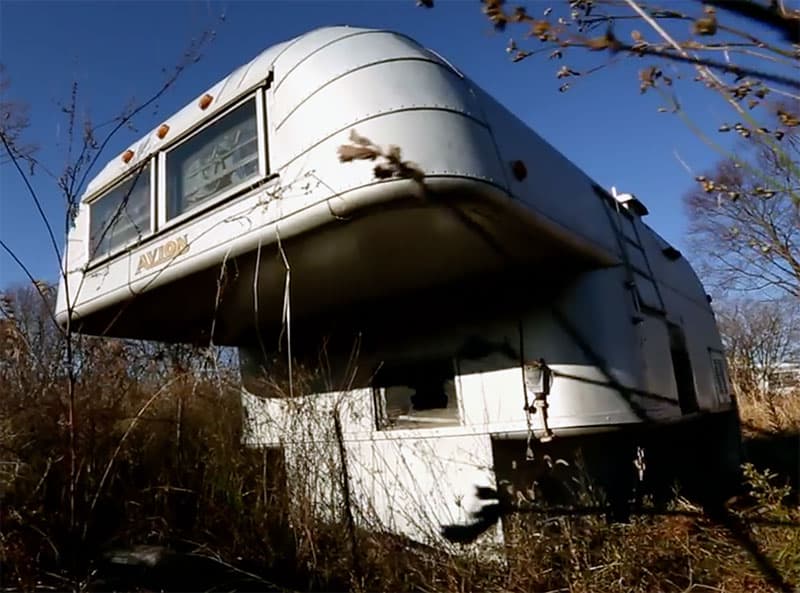 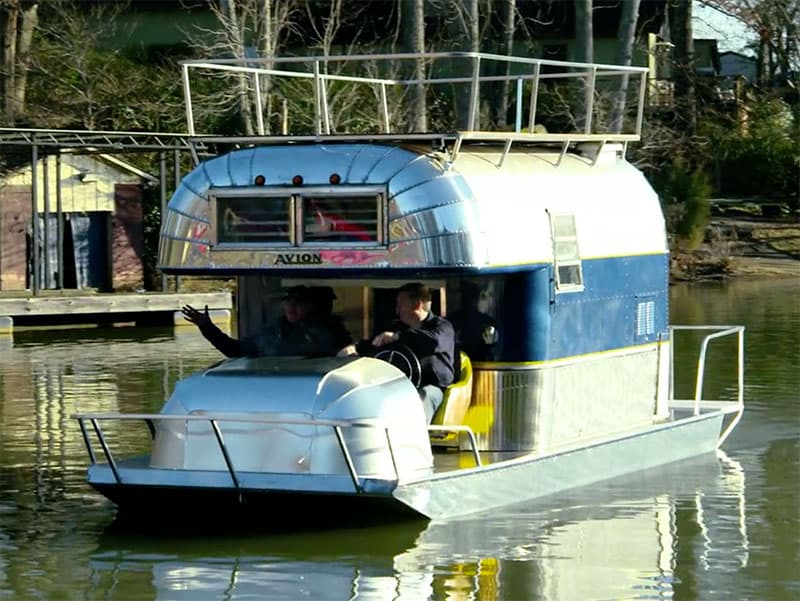 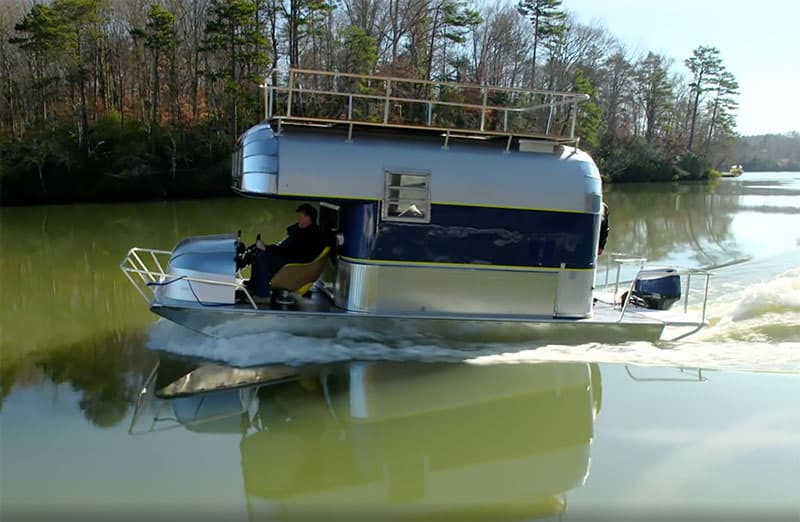 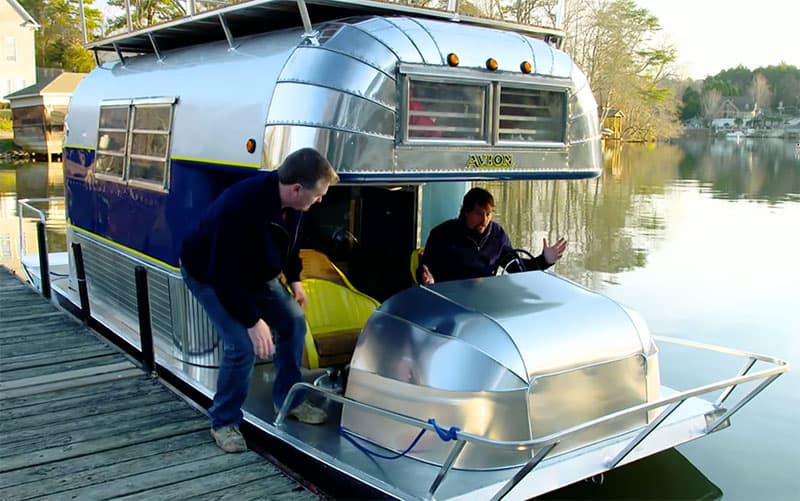 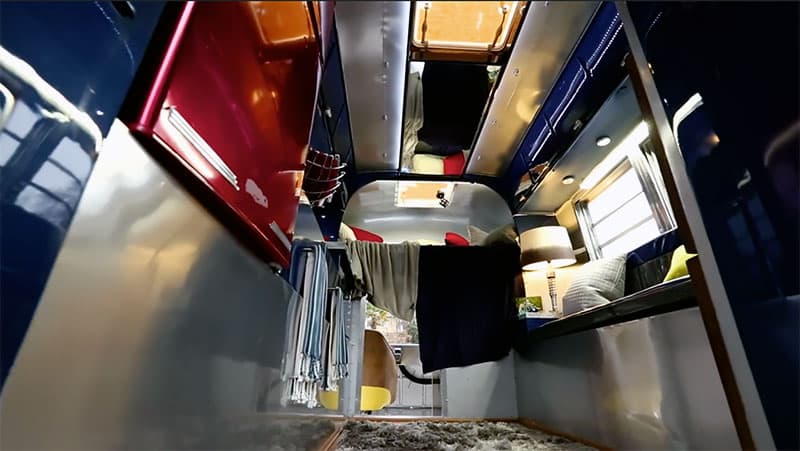 All photos above are screen caps from Flipping Ships’ video.  To see this amphicamper in action, check out their video below:

The 1960 Cee-Camp was able to go from land/truck, to sea, and back to land/truck again.  It was as a true amphicamper; part truck camper, part boat.

Flipping Ship’s Avion creation is a truck camper, but it’s now permanently attached to a boat.  This means it’s stuck at sea unless it’s being towed on a trailer.

As I write this admittedly insane article, we are staying at a Florida fish camp.  During our afternoon walk two days ago, a couple in a 25-foot C-Dory boat pulled up to the dock.  It turns out that they are living full-time on the C-Dory and traveling the waterways and highways throughout the United States.  Here’s the really interesting part; they live in the C-Dory whether it’s on the water or on a trailer behind their truck.  The C-Dory is both a boat and a travel trailer.

Minutes after our conversation, we looked up their C-Dory model on the internet and stared at the floor plan.  It’s very similar to a truck camper with a 26-foot interior floor length, forward sleeping area, full-booth dinette, kitchen, and a wet bath with shower and toilet.  The C-Dory also features 12-volt power from a battery bank, fresh and black tanks, and a refrigerator.  Grey water requires an external container, like many pop-up truck camper models.

When pressed for details about land camping, they explained that some RV parks had turned them away.  Evidently some campgrounds have rules against putting boats in a campsite, or didn’t understand that their boat was also a land-worthy RV trailer.  He later explained that most RV parks welcomed their business and thought their C-Dory RV-boat was a neat idea.

Once trailered, the Flipping Ship Avion could, at least theoretically, be used in exactly the same way.  Going further out on the nuttiness limb, one could probably make use of almost any truck camper to build a hybrid boat and travel trailer.  What’s funny is that I can’t tell if this idea is totally brilliant or heretical blasphemy.

In the meantime, we’re always on the lookout for more amphicampers.  They’re out there, cruising waterways like the Lockness Monster; somewhere between myth, mystery, and madness.  But unlike Nessie, these beasts are real.

Click here to see whether our readers think the Amphicamper is practical or practically nuts.