Bertram and Kare Furman report on their experience on the White Rim Trail with a Northstar TC800 pop-up camper.  Turn hard at Hardscrabble, gun the diesel, and don’t look down.

First, I must say, “Wow”, the White Rim Trail is big!  When you are down in the canyon, it is difficult to gauge the scale of the formations around you until you see a truck or a person for perspective.  Even then the distance and size can be deceptive.

The White Rim Trail has been on my list for a long time.  I didn’t want to do it alone as the trail is far from help, if needed.  Luckily, my friend Dave has also been interested in doing the White Rim Trail for a long time and worked very hard to get permits.  There are not many campsites down on the trail, so access is very limited.  Maybe one to four sites per camp zone.  As the trail is in Canyonlands National Park, it is highly regulated. 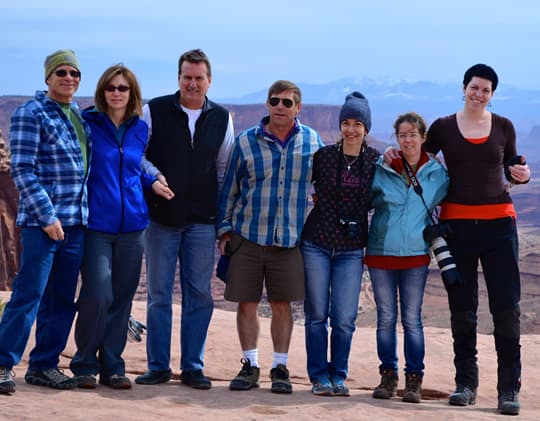 Above: The group that tackled the White Rim Trail.  Bertram and Kare are on the far left.

Dave, our team leader, has an 1987 Toyota Land Cruiser FJ60, a classic.  He outfitted a screen safety door on top of his racks to use as a platform to carry much of his gear.  He needed to do this because his wife invited two of her friends to join us; two women from Sweden who were originally from Cuba and Czechoslovakia.  One was here for a conference.  For the other, this would be her first time to the states.  What a cool way to see our country!  She rode with Eric in his 2008 Dodge 2500 CTD with a Four Wheel Hawk, which is a perfect set up for this trail.  A light camper on a powerful truck. 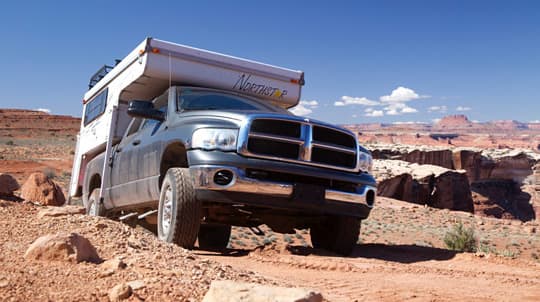 There were a lot of logistics to the trip.  For starters, I needed to make sure my truck was ready.  I took my truck in for fluids, a new air filter, and to check for any loose bolts and fittings.  I thoroughly inspected the truck as well.  My nine year old tires were looking a little dry-rotted, so I replaced them with Bridgestone All-Terrain E-rated tires.  I thanked myself many times on the trail for doing this.

The drive out to the White Rim Trail from San Diego was a two-day drive, seven hours per day.  It took some planning to determine where our layover days would be.  We expected to be on the trail for six days, and we needed to have enough food and energy.  Typically, we can go two to three days on our one battery before using the generator, and we can pack about three days of food in our refrigerator.  Also, many of our longer trips bring us through towns to restock.

This time we took a large cooler with both block and cubed ice.  Because we were driving every other day, my batteries would get re-charged by the truck alternator.  This worked out.  The other fellow with a camper coming with us, Eric, had a solar panel on his camper and a twelve-volt cooler to supplement his refrigerator.  I envied his solar.  Dave was using dry ice for cooling, and was tenting. 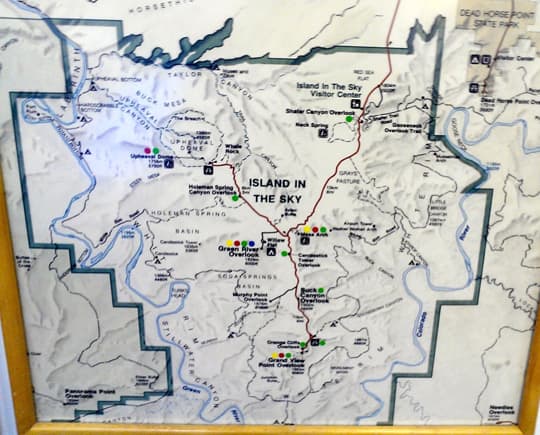 Above: The White Rim Trail is in Canyonlands National Park, Utah

The entrance to the White Rim Trail is Shaffer Road, which was built in the early 1900s to get to Uranium that was supposed to be in the canyon.  As I understand the history, some was found, but not that much.

The road is on a layer of White Rim Sandstone deposited some 220 million years ago.  The depth of these canyons goes back 320 million years.  For perspective, the deepest canyons where we live near Anza Borrego State Park go back about eight million years.

The Canyonlands National Park canyons are huge, both in breadth and depth.   And also in beauty!   The views were stunning. 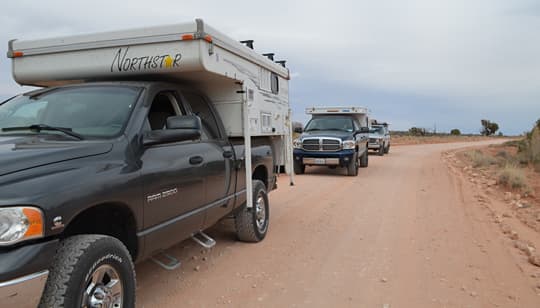 Above: The three rigs that tackled the White Rim Trail

Even though the Shaffer trail is steep, windy, and on the edge, it is not that hard to drive.  However, it is steep with sharp turns that kept me on my brakes.  The road is slightly rutted which caused some camper rocking.  The road on the east side of the White Rim Trail is easier compared to the west side.

I didn’t air down as I was waiting to see if I would need to.  I never did, but I think ten to twenty pounds might have made the ride a little smoother.

Above: The first leg of the White Rim Trail

The rest of the road to our first camping spot was slightly rocky, but not too bad.  When we arrived at our first camp spot, called Airport, it was very windy.  We decided to create a U-shaped wind block with our vehicles for the tents.  Even with the wind block, the tents did get battered around quite a bit. 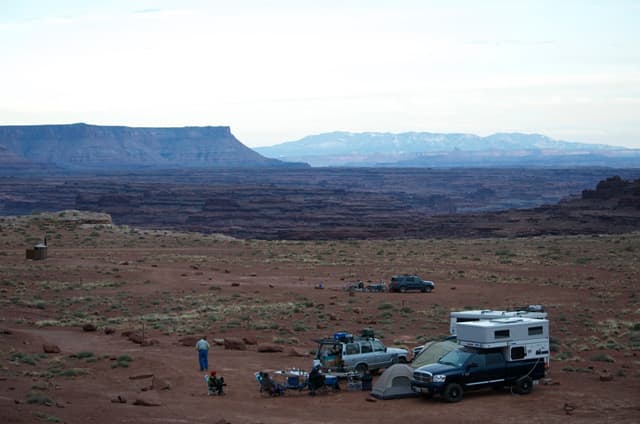 Above: The U-shaped wind block

We were able to fit all seven of us in my camper to hang out, stay warm, and out of the wind.  A great thing about the interior of my Northstar TC800, which does not feature a bathroom, is the open interior space.  Room enough for seven!

It was fun to be packed into our camper drinking wine and getting to know each other a little better.  The Four Wheel Camper had a head and shower, which took up a lot of room for a small camper. 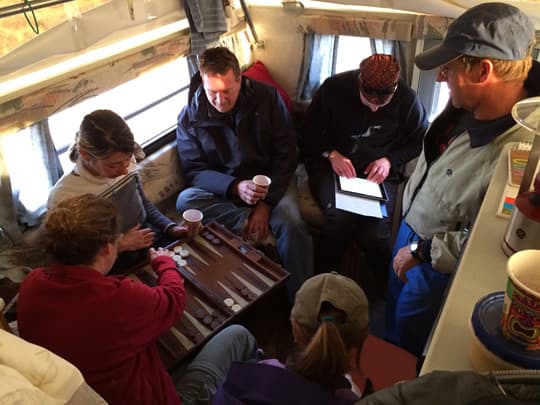 Above: Seven people staying out of the wind and warm in Bertram’s Northstar pop-up camper (the seventh person is obviously taking this picture) 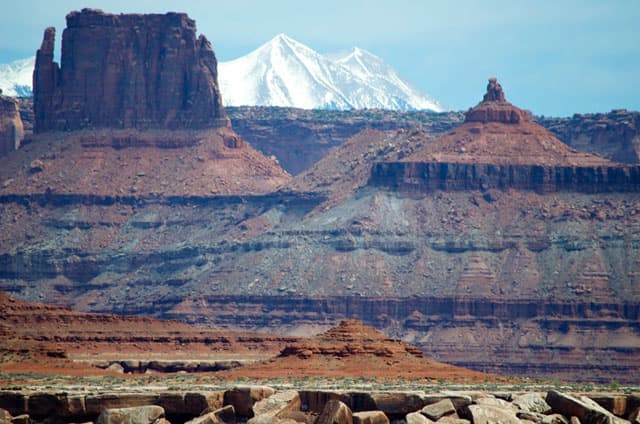 Above: The view from the campsite

The campsite was nice with only one other group.  The pit toilet was clean and had a great view.  After all, it is a national park!

Above: Traveling the White Rim Trail and White Crack campsite – click to enlarge

The next day we were off to White Crack camp.  The going was pretty easy with some great views from the apexes of the canyon edges.  Truly spectacular! 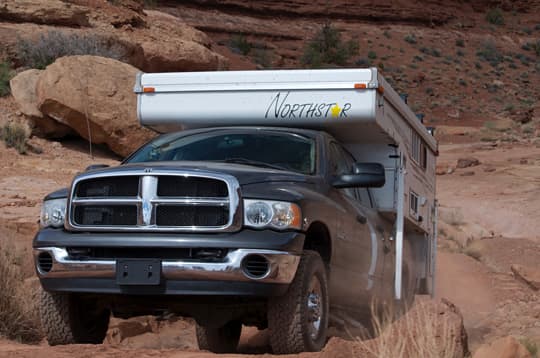 Also, it was a little it scary as we drove around the edges.  As you see all around us, these rocks break.  The trail was rocky, but not too technical.  Basically, the White Rim Trail can be done easily with a light jeep type vehicle.

The difficulty comes in with our heavy campers.  Dave’s FJ did not have too much trouble.  Eric’s Dodge with the Four Wheel Camper also did not have much trouble.  My vehicle was the heaviest and I had to take the road very slow to prevent too much rocking.  My average speed was about five miles per hour.

White Crack campsite is beautiful, on the edge of a spit of white rim sandstone on the edge at the confluence of the Green and Colorado rivers.  It was still a bit windy so we re-created our wind block U.  Again, views from this point were stunning.

The next morning we woke up to snow.  None of our weather reports predicted snow.  It was quite the surprise and very cold.  In times like these, I love my truck camper.  We were warm as a bug in a rug! 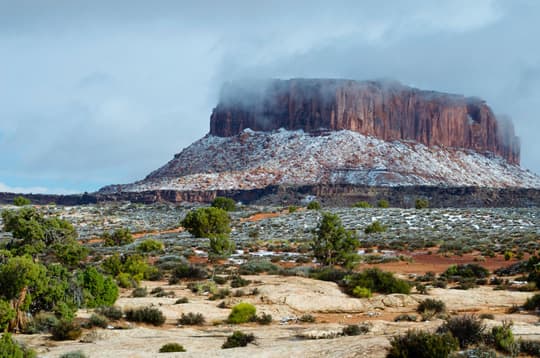 As the day went on, the sun quickly melted the snow and we had a great day hiking, resting, and shooting pictures.  The views from this camp spot were breathtaking with 270 degrees of canyons.  Absolutely incredible. 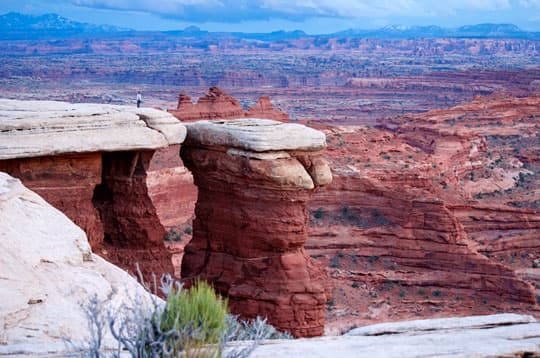 The next day we were off to Candlestick camp.  This would take us over the famous Murphy’s Hogback.  There are a few training hills before Murphy’s Hogback that you never hear about.  They challenged us and got us ready for the big one.  For heavy vehicles like ours, it’s a challenging up and down. 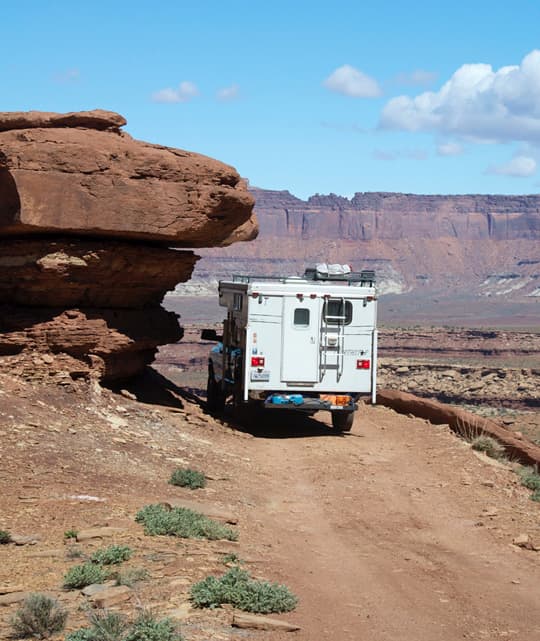 I think it is difficult to gage the largeness of these hills in the pictures.  The up on Murphy’s Hogback is long, narrow, steep, and very close to the edge.  The down has some steep parts, is close to the edge, and has the famous overhang, which would be challenging for a tall hard-sided camper. 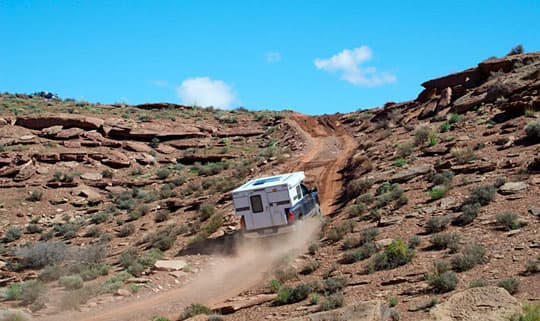 Above: One of the training hills

Above: The sway bar linkage broke, but was not a significant break – click to enlarge

And what would any good adventure trip be without something breaking?  A few miles later, I was navigating a down when I heard a clunk sound from my front end.  I broke the right sway-bar linkage.  I was thinking of undoing these before the trip, but didn’t.  Fortunately, this was not a significant break.

The rest of the way to Candlestick wasn’t too bad.  There were some hard rocks with potholes, and a few more ups and downs.  And big views! 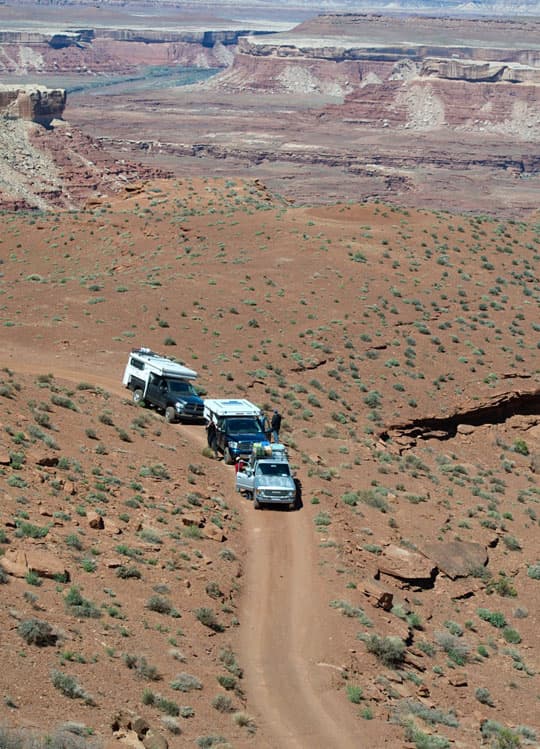 The camp is near the edge of the White Rim Sandstone.  The layer here is very thick. There is lots of great hiking from this campsite and views of the Green River. 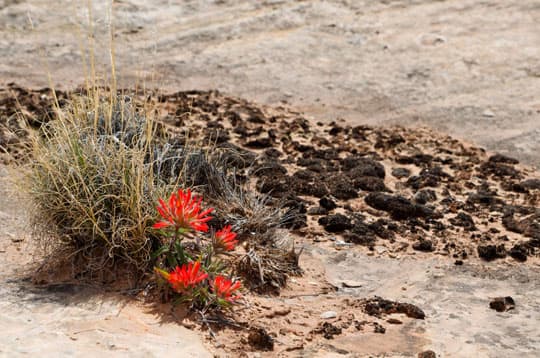 There were lots of islands on the rocks where water, cryptobiotic organisms, flowers, and shrubs brought life. 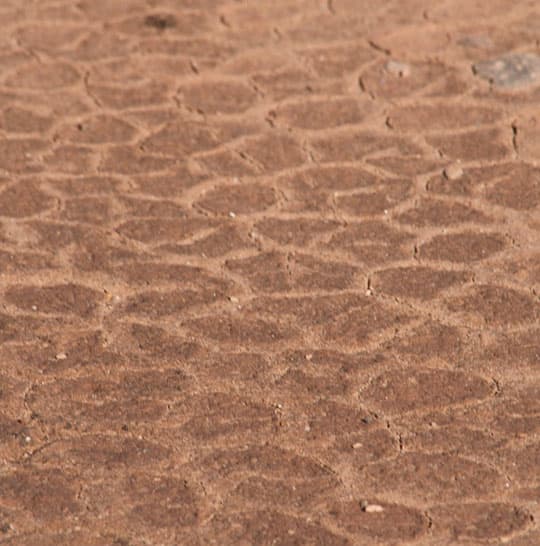 Cryptobiotic organisms are organisms that can survive in extreme environmental conditions such as drought, freezing temperatures, and low oxygen by stopping all metabolic processes including reproduction, growth, and recovery. 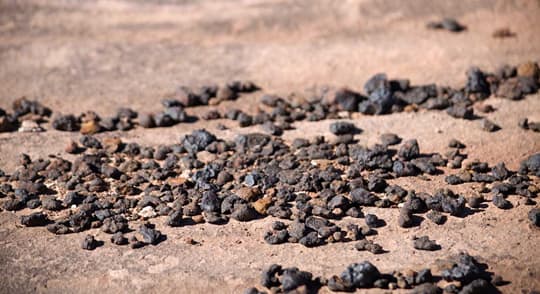 Our last day on the trail we had Hardscrabble Hill to go.  My wife says to think of Hogback as the training hill for Hardscrabble.  Hardscrabble is longer, steeper, and narrower.  The turns are many and very tight.  I remember this steep left turn with the edge to the left, the hard rock to the right.  I remember thinking, I may not make this turn; full thrusters with the diesel, blindly turning, praying my wheels stay on the track.  This is where the diesel shines, providing the power and torque for this hill. 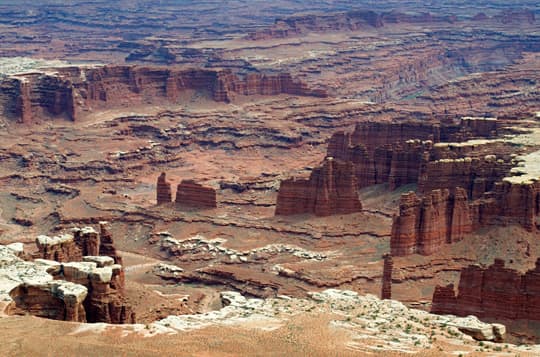 The end of the trail is the Mineral Springs Road.  It’s a lot like the Shaffer down, except going up!  Again, I was thankful for the power of the diesel.

Here are some pictures from the rim top looking down on the trail.  If you look close, you can see the White Rim Trail. 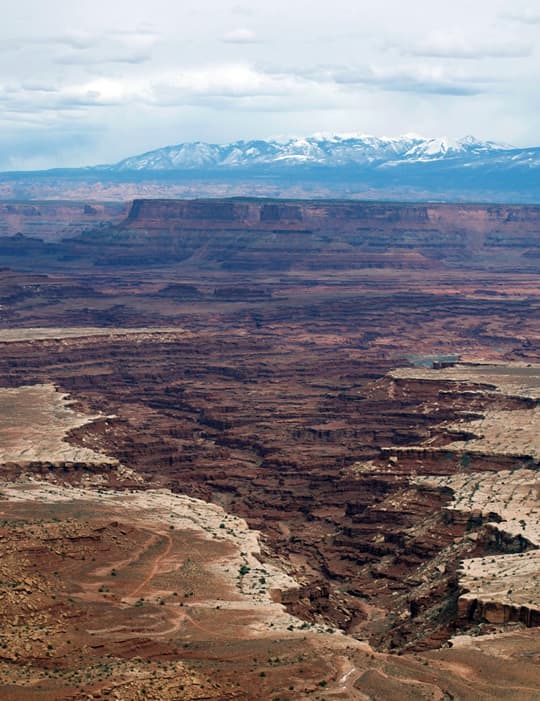 All and all, it was a great trip.  If you ever get the chance, the White Rim Trail is where our pop-up truck campers shine. 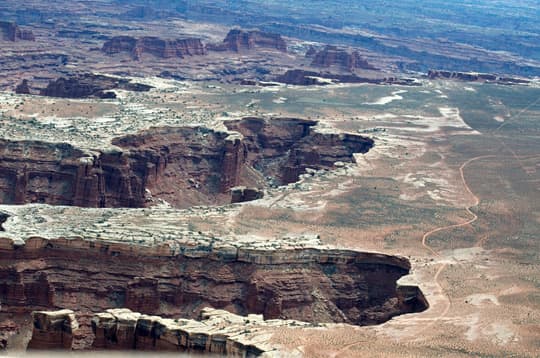 I do believe a well set-up lightweight hard-side could do this, as evidenced by truck camper reports before mine.  However, you know those guys worked it, and the overhang is tricky. 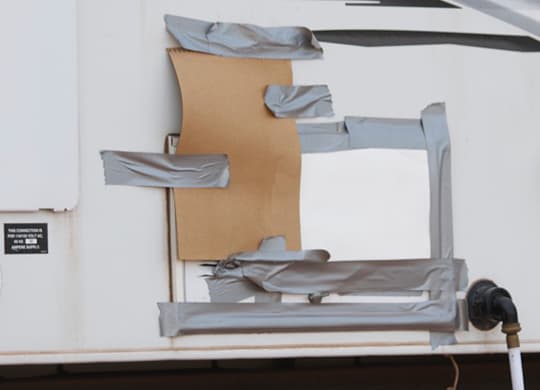 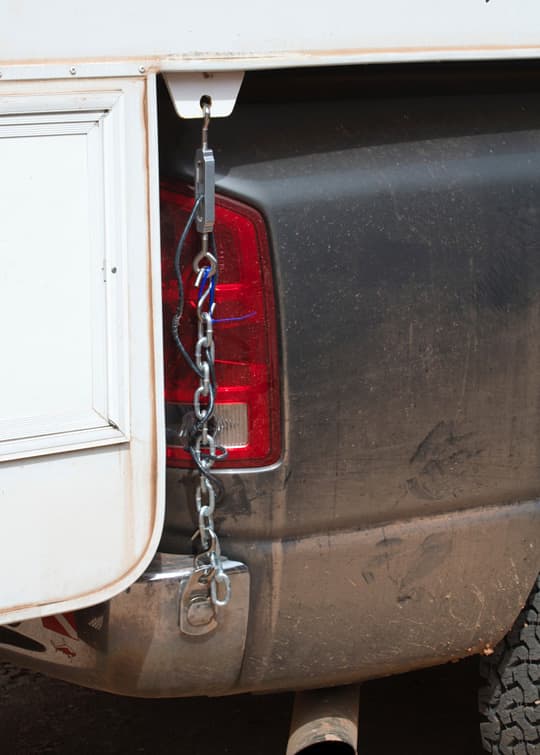 This second picture shows that I lost a Fastgun somewhere on the trail.  If you find it, please send it back.  There’s a lot of bumping and the camper moved about quite a bit.

I carry chain and hooks for this situation and secured the camper for our ride home.  The road, because of the scale, looks smooth, but it’s not.  My friend with the Four Wheel nicked his stairs which hung from his trailer hitch, so we had to take them off. 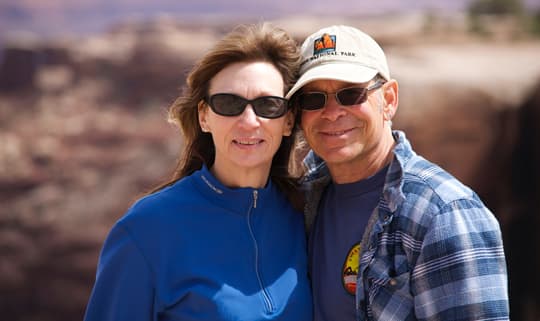 We came home through Flagstaff, Arizona and enjoyed the micro-breweries. 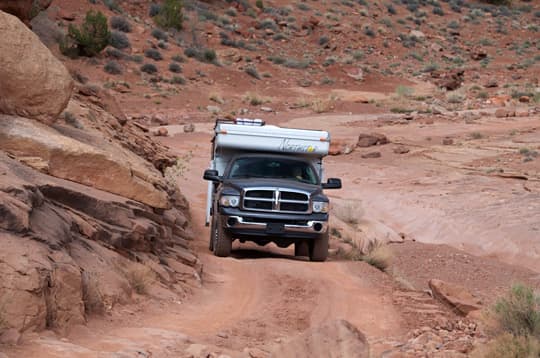 A trip to the White Rim Trail is highly recommended!

Have you driven the White Rim Trail or a challenging dirt road with your truck camper?  Please share your story about conquering this road.