Keith Donkin, General Manager for Northern Lite, reveals the story behind the devastating Northern Lite fire in February, and the decision to rebuild.  Northern Lite is coming back!

The phone rang around 9:00am on Wednesday, February 26th.  It was Roy Garland, a long time Truck Camper Magazine reader, fellow rally goer, and a good friend.

“Hi Roy!” I heard Angela say from the next room.  Then there was a long pause.  I wasn’t paying much attention until I heard Angela’s reaction.  “Oh no!” she exclaimed, “Oh no.”  She kept repeating it over and over.  When I walked into the room Angela looked at me and said, “Northern Lite burned down last night.”  “Oh no.” I said.  “Oh no.”

Fortunately, the local Kelowna, British Columbia press was reporting that no one was injured during the fire.  The fire had occurred in the middle of the night, so no Northern Lite employees were in the building.  The fire fighters had read the dangerous situation correctly and none of their brave men and women were injured.  According to the reporters on the scene, the most important hurdle had been cleared.

As a media organization, we decided to wait on reporting the fire until we had an official statement from Northern Lite management.  Just a week and a half earlier we had worked the Springfield RV Show with Keith Donkin, General Manager of Northern Lite.  We texted Keith and let him know that we would hold the news until we had the news from the source.  In our opinion, it would be irresponsible to do otherwise.

When we heard back from Keith, it was clear that there were a lot of issues and concerns still outstanding.  There would be no easy answer as to when and how Northern Lite would rebuild, at least not for a while.

Keith asked for our patience and promised we would be the first to know, when he did.  As the days and weeks passed, we received emails and phone calls from Northern Lite dealers, customers, and would-be customers asking when Northern Lite would return.  Just over five weeks later, we finally have the good news.

The following is an interview with Keith Donkin, General Manager for Northern Lite. 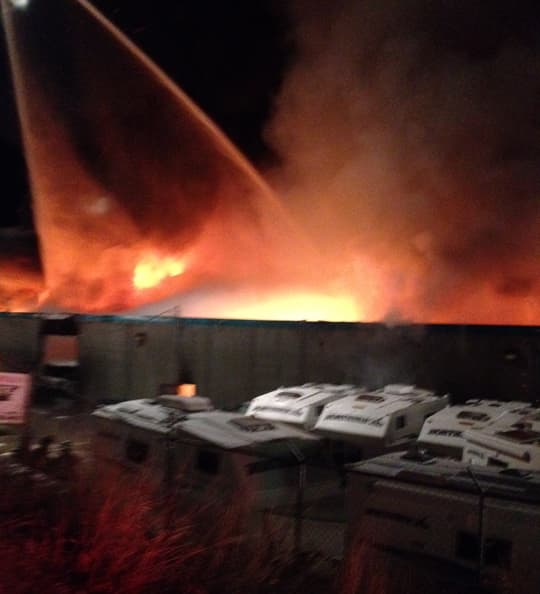 Above: The Northern Lite factory fire on February 26, 2014

TCM: Tell us what happened.

Keith: On the morning of February 26th, 2014, my dad received a call just after midnight.  The fire alarm at the factory had been triggered and there was a fire at the plant.

After Dad left, Mom phoned me.  Dad arrived at the plant earlier than I did and the fire trucks were just ahead of him.  When they got there, smoke was coming from all sides of the building.  The fire was heavily involved after that.

The firemen attempted to enter the office to recover computer equipment, but it was spreading too fast.  There was a lot of wood and other combustible material in the factory.  Once the fire got going, it went fast.  The plant burned aggressively for eighteen hours.  There were fourteen campers on the line at the time of the fire. 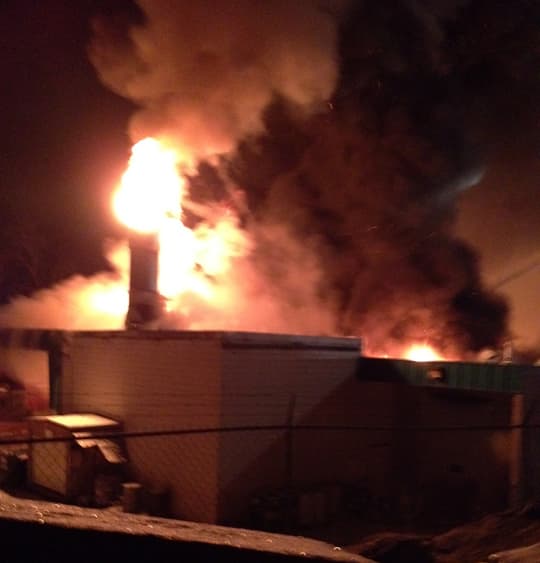 Above: The plant burned agressively for 18 hours

The cause of the fire has not been figured out.  We do know that it didn’t start in the fiberglass or cabinet shop.  The fire started in the middle of the factory, but it burned so hot that the investigators couldn’t find the real cause.

We are sure there was no arson because the security system was not triggered.  There was nothing suspicious about the fire.  It could have been caused by a roof top heating unit, but we don’t know.  Experts from Vancouver were brought in to investigate, but even they determined the fire burned too hot to know the exact cause.

Once the fire was out, there was an environmental study done to look over the building and property.  That process took five weeks.  This past Thursday we got the report that the site and building are not contaminated.

Demolition started on Thursday and the site is completely cleared at this point.  Only the existing floor and one tilt up wall are left.

TCM: Was anyone injured in the fire?

Keith: No one was injured or hurt.  The fire happened after hours, so no employees were present.  None of the fireman were hurt. 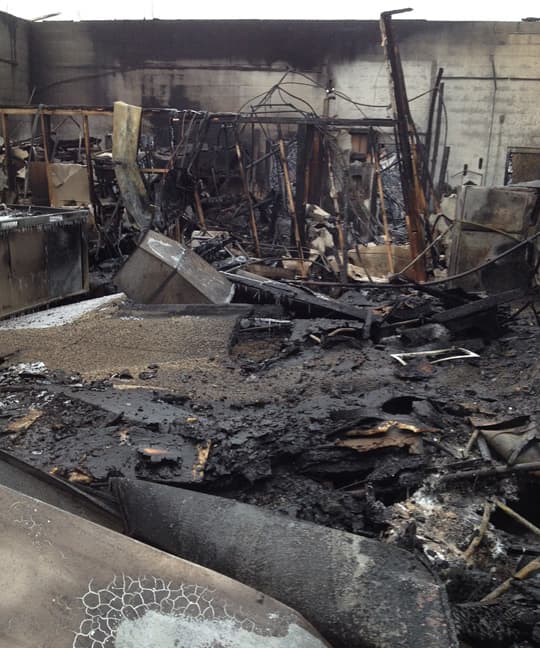 Above: The fire completely destroyed the Northern Lite factory 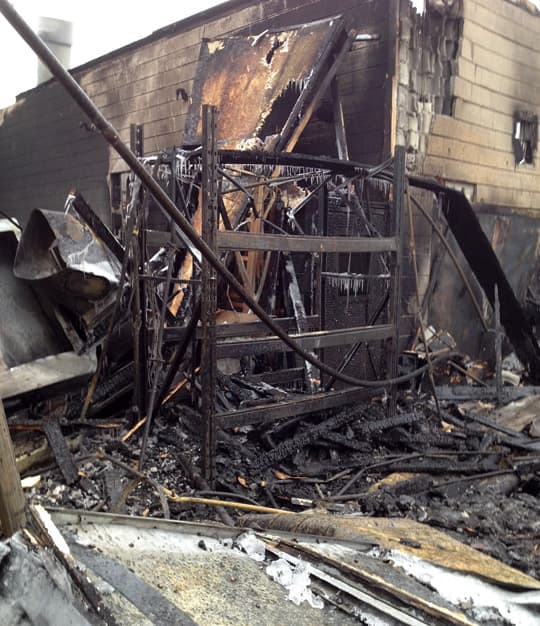 Above: The fire burned so hot that no cause has been identified

TCM: What has been going on since that day?

Keith: We have been working with our insurance company.  The building and contents are a 100% total loss.  It’s a very large insurance claim.

All of the fiberglass molds that were not damaged in the fire were moved off site to make room for the reconstruction.  That relocation process has been time consuming.  We just finished the relocation on Friday.

One of our on site storage warehouses had to be unloaded because it’s going to get demolished.  The redesign of the building will make us more efficient and will add approximately 10,000 square feet to the plant.

Keith: A family owned boating business offered to let us utilize their fiberglass shop.  We carefully looked into that, but the process of how our molded fiberglass truck campers are built – versus fiberglass boats – is quite different.

Truck campers have many more steps in the building process.  Plus, we would have to find a different location to build the campers.  The shells could have been done at the boat plant, but the inside of the campers would have to be done elsewhere.

Further complicating things, we lost the shower molds in the fire.   The 10-2 and 9-6 molds were also destroyed.  This will bring exciting changes to those two models since we will be redesigning them from scratch.  We had a designer here two weeks ago.  We’re already designing the new molds and making changes to them.

TCM: Is there a sense that this tragedy could be an opportunity for Northern Lite?

Keith: This tragedy definitely gives us the opportunity to make changes.  We always listen to our customers.  For example, people didn’t like the 10-2 bathroom sink location.  We’re going to be able to change that.  Designing new molds will also allow us to make changes on where we can run piping and give us extra pantry space.  For our new 10-2, we plan on having one of the largest wet baths in the industry.

TCM: How are you going to redesign and rebuild the wiring harnesses, cabinetry jigs, and build books?

Keith: That will all get done over the next two months.  We have kept one of each Northern Lite model off site and are taking them apart and reverse engineering them.  This process will also help us rebuild the jigs and harnesses.

Our insurance company has helped us keep our employees.  The Northern Lite team will be helping to rebuild the jigs and harnesses.  No one is more familiar with those jigs and harnesses than they are.  We will use their expertise to get everything rebuilt right. 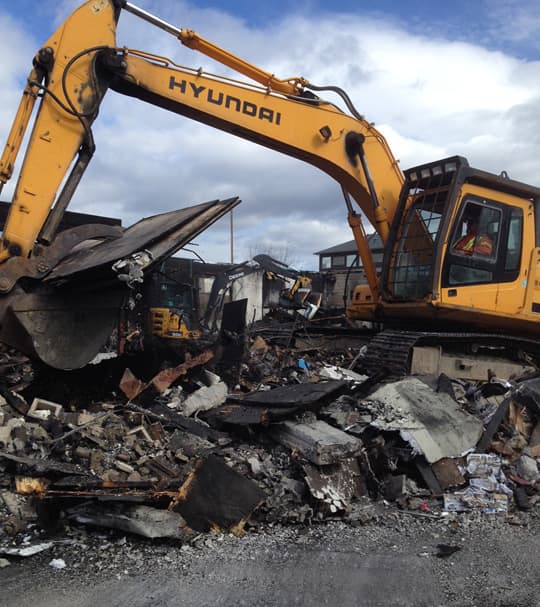 Above: Workers clearing out the burned debris 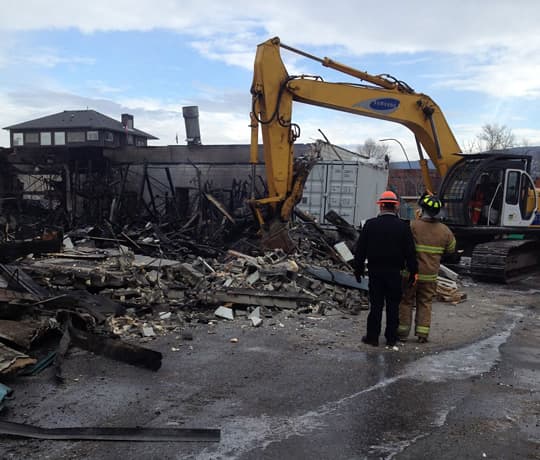 Above: Demolition of the original building

TCM: Do you have a time table for when the factory will be completed, and when truck campers will begin rolling off the line?

Keith: We don’t have a concrete timeline yet.  The best case scenario is to be back in production in six to eight months.  We are getting a lot of support from local agencies to make this happen.  We’ve had support from our dealers and customers.  We have been overwhelmed by all of the support.

TCM: Between now and when the new factory is built, will Northern Lite honor warranties for existing customers?

Keith: Yes.  Nothing changes as far as supporting our dealers and customers.  Parts are taking longer to get to people, but we will get people what they require.  Specialty items are getting outsourced.  For example the boat company is making the fiberglass air conditioner platforms.

TCM: If a customer ordered a Northern Lite camper before the fire, when can they expect to see a unit delivered?

Keith: Once we get the factory rolling, the people who had orders will be the first to get campers at the price they bought them.

TCM: How are you going to rebuild the molds?

Keith: We are working with a 3D CAD designer.  That design will then go to the plug manufacturer and then the plugs will be built with a 3D CNC machine.  The plug is the finished product, and then the molds are built from that.

The company that makes the plugs is in the United States.  Once they’re completed, the molds will be trucked back to Canada.  They’ve held some production time in their system knowing that our orders are coming through.  That’s just another example of a company that’s been helping us.

TCM: Since the 9-6 and 10-2 molds were destroyed, are you going to replace them with another 9-6 and 10-2, or are you considering completely new models?

Keith: We will definitely have a 9-6.  There will be something based off the 10-2.  Time will tell what exactly that will be.  That’s one of the decisions we’re working on.  I can say that dealers and customers will be excited.  There will be a lot of exciting changes. 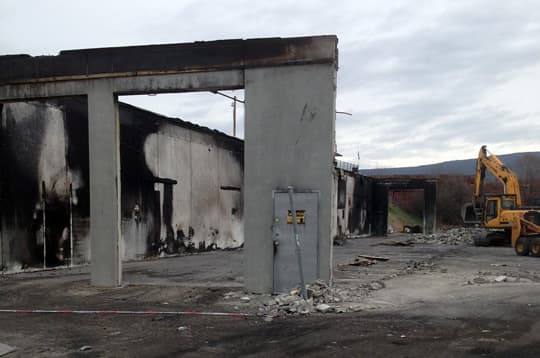 Above: This photograph shows the foundation and front wall of the burned building.  The existing foundation will be utilized for the new factory.

TCM: Are you rebuilding in the same location and on the same foundation as the old factory?

Keith: We are utilizing the footprint of the old factory, which will save us about a month and a half of time.  From there, the entire layout and building will be changed.

The whole elevation is coming up a foot.  By raising the elevation, there will be space to run wiring and plumbing under the factory floor.

There will be a new glass shop and room separate from the factory in the rear of the property.  The firewalls will be separated, and the buildings will not be in contact.

The new factory will have 10,000 additional square feet.  That’s a lot of square footage.  Overall, the factory will be much more efficient and will greatly enhance our capacity.

TCM: Is there anything else you would like to add?

Keith: Thank you to all our friends, colleagues in the RV industry, and customers who have supported us.  This has been traumatic for our family and staff.  We’re looking forward to getting rebuilt and being better and stronger than we were before.

We ask everyone to be patient and to be looking forward to buying their new Northern Lite camper when we’re back in operation.