In those stories, we revealed exactly why we selected our current truck, and how we matched it to a 2013 Lance 855-S.  In fact, we went into such excruciating detail that many readers have teased us at RV shows and rallies.  I mean who weighs their cat as part of their payload calculations?  We do.

While some may find it laughable, ridiculous, or just too much work to go to the lengths we did to (a) select a truck and (b) payload match it to a camper, we believe it’s important to practice what we preach, and to experience, as much as possible, what the typical consumer goes through during that process.  We learned a tremendous amount during that experience and did our best to share every ounce of it here in Truck Camper Magazine.

As a result of all that effort, we were rewarded with a truck and camper match that needed nothing; no air bags, no springs, so struts, no special shocks, no sway bars, no upgraded wheels and tires, nada.  These suspension enhancement products may improve the ride and handling of our truck and camper, but the stock truck itself handled the loaded camper well.

Guys at rallies like to ask, “So what kinds of suspension mods are on your rig?”  At that point I should point my camera at their face to catch the look of complete shock when I would say, “Nothing.  The truck is completely stock.  Just like the day we picked it up at the dealer.  It’s naked.”  The really funny part is watching these guys look at our rig again, and then nonchalantly walk over to our rear wheels for a close inspection.

In truth, my naked truck bravado was a bit overstated.  Although our truck and camper rig handled beautifully with or without the truck camper loaded, there was a problem.  When we were going down the highway at night, people were flicking their high beams at us.  Upon reflection, we realized that the headlights on the truck must be raised just enough to be pointing into traffic.  While the truck and camper were properly payload matched, the loaded camper did cause the rig to sag.

Looking straight at the rig from all angles, we really struggled to see this sag.  If it was there, it was very slight.  We could of just adjusted the headlights, but I didn’t want to mask the problem.  If the rig was sagging, even a little, we wanted to find the most efficient and effective solution available and solve it.  Time for an aftermarket suspension enhancement product.

While suspension enhancement products can make dramatic differences to the handling and performance of your truck and camper combination, they also cost money, add weight to your rig, and subtract payload capacity.  Our advice is to match your rig properly first, then add the suspension enhancement products you need to solve the ride and handling problems you have.  Don’t spend money or add weight unless you need to.

Torklift International’s StableLoads are designed to pre-load the factory overload springs by engaging the overload springs before the truck sags.  Conceptually, they seemed like an elegant and non-invasive solution to the problem we were experiencing. 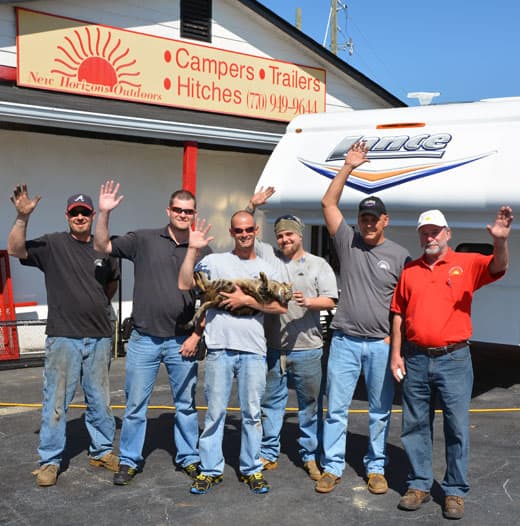 We arrived at New Horizons Outdoors the week after the Mid Atlantic Truck Camper Rally.  We finally met Steven Vick, General Manager, and Jennifer Perry, Office Manager.  They introduced us to John Prater, Service Manager.  John would be installing the StableLoads. 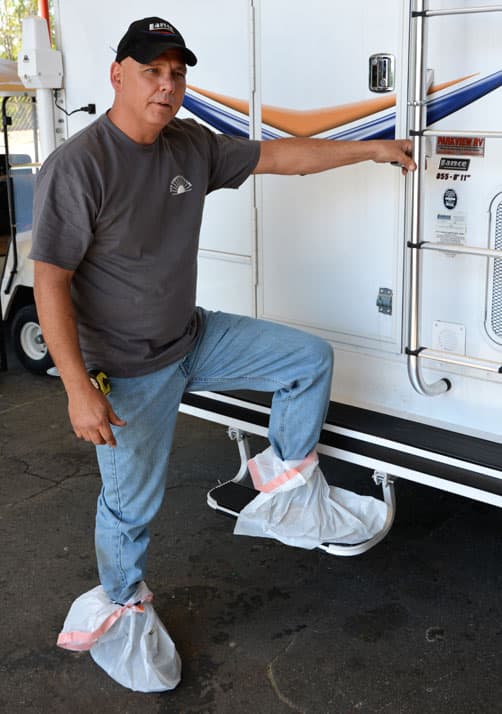 Above: John Prater, Service Manager for New Horizons Outdoors, installed the Torklift International StableLoad Quick Disconnects.  After the installation, John adorned boot protectors to assist us with some other items inside the camper. 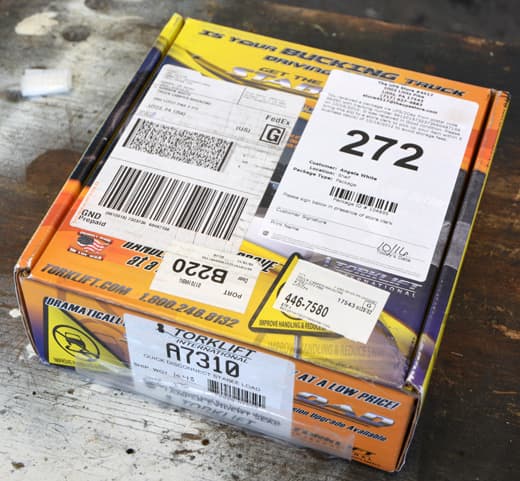 Above: The Torklift International A7310 StableLoad Quick Disconnect box 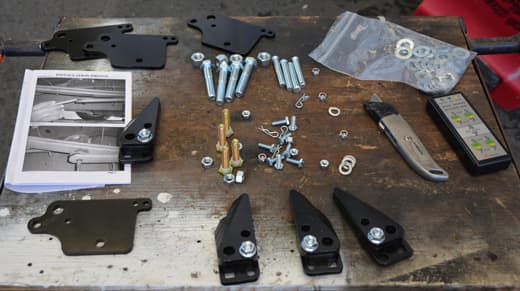 Above: The A7310 StableLoad Quick Disconnect parts

Step 1: The first thing John did when we handed him the Torklift International A7310 StableLoad Quick Disconnect box was to identify all the parts in the box.  He said that he always makes sure that he is not short on pieces.   Everything we needed was there and accounted for. 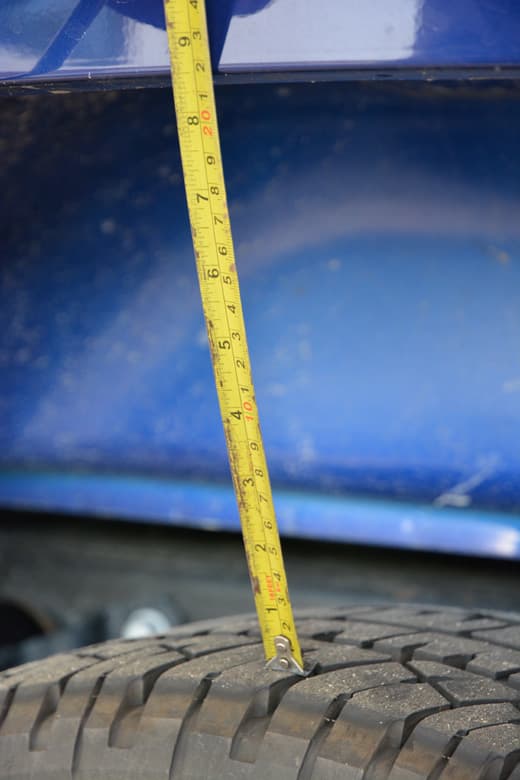 Step 3: To begin the installation, we removed the turnbuckles and lowered the camper jacks until the camper was lifted out of the truck bed.  John then lifted the truck with a floor jack to take the weight of the truck off the rear spring packs. 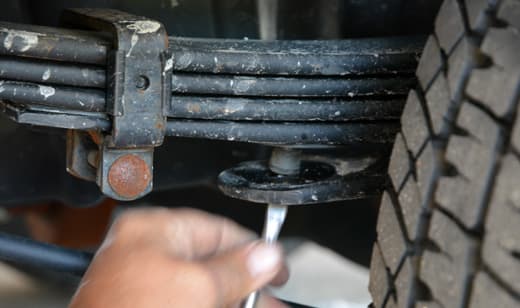 Step 4: Most springs have a hole in the overload.  You sometimes have to pop-off a plastic insert (see below) to expose the hole.  Our truck had the plastic inserts. 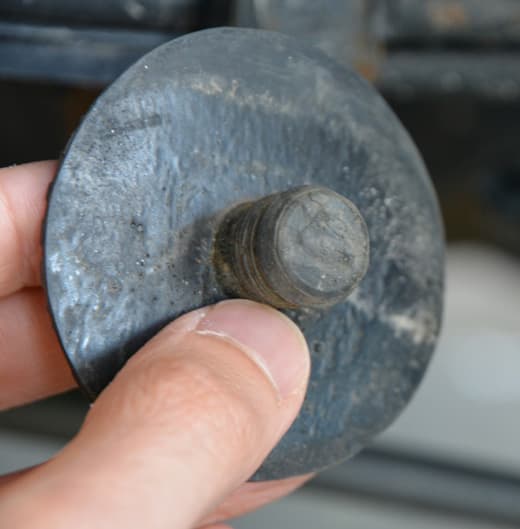 Once these were located, John removed them.  These factory holes are used during the installation of the StableLoad Quick Disconnects. 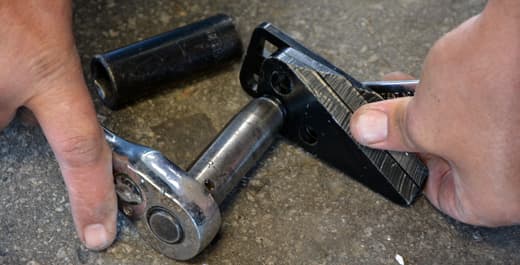 Step 5: John then assembled the StableLoad Quick Disconnects per Torklift International’s instructions.  This process was straight forward and took about five minutes.

Step 6: John determined the thickness of our spring pack to see how many washer spacers he would need to add.  He told us that we want the StableLoad Quick Disconnects to swing easily, so they would be easy to connect and disconnect as designed.  Too few washers and the product will be too hard to move.  Too many washers and the product could slide out too easily.  He also explained that you need a lock nut and a washer to prevent the product from loosening. 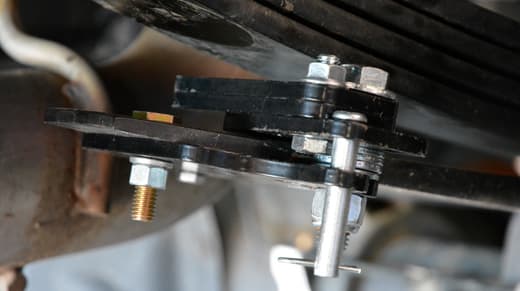 Step 7: On the driver’s side, we had four washers front and back.  It was then that John discovered that our springs did not have enough room for all three StableLoad Quick Disconnect wedges. 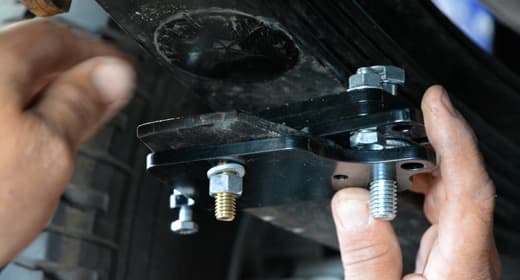 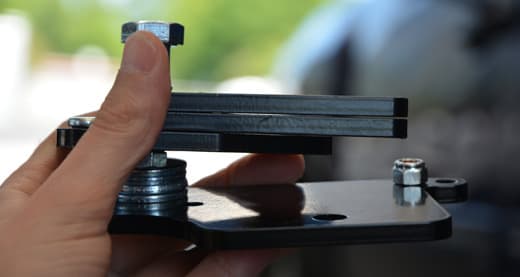 To solve this, he removed one of the wedges.  John only recommends removing a wedge if you need to. 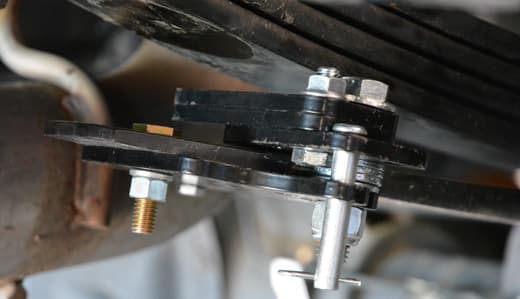 Above: Quick Disconnects engaged with camper off the truck 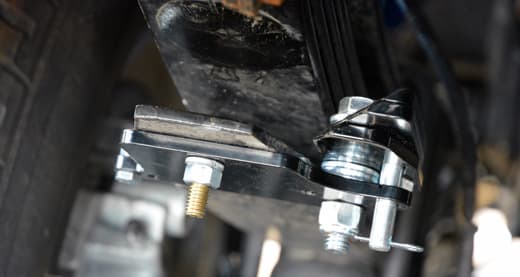 Step 9: At this point, both StableLoad Quick Disconnects were installed. 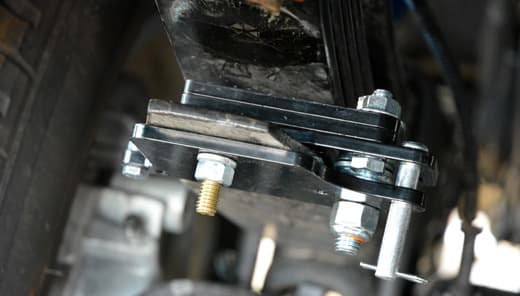 Above: Quick Disconnects engaged with camper on the truck 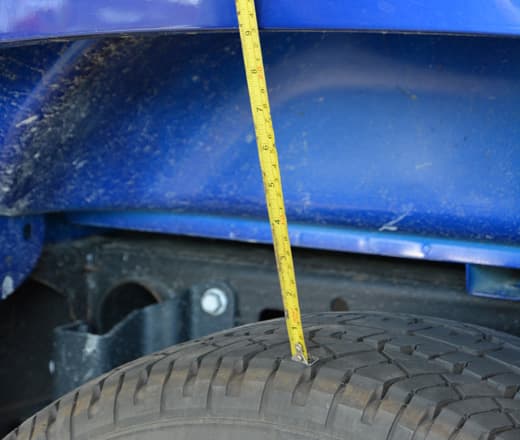 Test Drive to the Four Corners 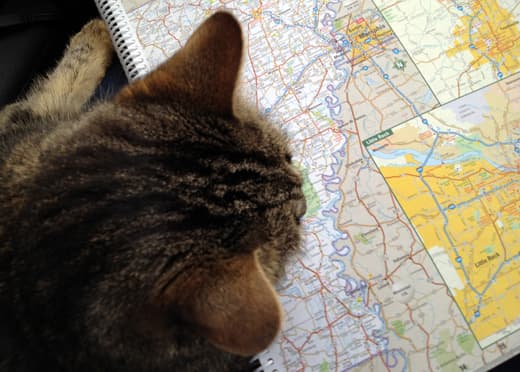 Above: Our cat, Harley, helps navigate our adventure to the Four Corners area

After a two-hour installation (including our constant questions and photography), we said our goodbyes to John, Steven, Jennifer, and the New Horizons Outdoors team.  Now we would drive our rig West and experience the difference the StableLoad Quick Disconnects provided.  For the record, there were no other suspension enhancement products on our truck.  If there was a difference, it had to be the StableLoad Quick Disconnects.

It took all of about ten seconds to realize just how different a ride our rig had with the StableLoad Quick Disconnects.  First, we could feel the rig was slightly more forward in angle.  How could we feel half an inch in the rear spring packs?  I don’t know, but I know that we both sensed the nose being slightly lower and the angle of the rig was a touch more forward.  That sensation was immediate.

The next thing we realized is that the rig felt more firm.  Our properly matched rig didn’t suffer from excess sway, but what sway it had was diminished as the ride felt tighter and stiffer.  This also meant that we felt more road bumps than we had been used to.  When we hit potholes, speed bumps, rail road tracks, or steep curbs, these features were amplified through the truck more with the StableLoad Quick Disconnects installed.

As night fell, we waited for the obligatory high beam flashers.  They never showed up.  The StableLoad Quick Disconnects either fixed the sag, or somehow scared all the flashers away.  It was a relief to no longer get folks flashing their high beams at us.  No matter how many times it happened, it always had me looking out for the fuzz, and then checking our high beams were turned off. 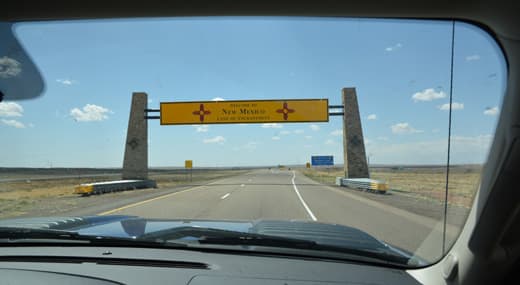 Above: Two days after the StableLoad installation, we arrived in New Mexico

Since correcting our minor sag issue was the goal, it would be tough not to call the StableLoad Quick Disconnects a success.  Overall, we were quite pleased, with one important caveat.

Sometimes Too Much of a Good Thing 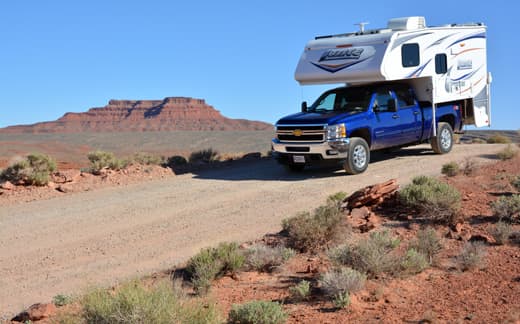 Above: Exploring Valley of the Gods in Utah

One of the main reasons why we chose a single rear wheel truck was so we could experience more off-road truck camping opportunities.  Our previous truck was a dually with Rickson 19.5” steel wall tires; a wonderful set-up for highway and pavement, but not well suited for off-road exploration.  For example, 19.5’s are not able to air down for beach camping or other loose and/or soft ground conditions.

Finally, at long last, we had a single rear wheel truck and the opportunity to see how it performs off-road.  We were out West in the Four Corners area, and surrounded by off-road adventure waiting to happen.

Since we’re relatively new to off-road driving, we decided to tackle improved gravel roads before we really set out into anything challenging.  Based on our research, the Valley of the Gods Road sounded perfect.  It’s a wild undulating mostly gravel road through breathtaking red rock desert country.  Even better, you can camp there.

We entered the Valley of the Gods Road from the east entrance and began our gravel journey late in the afternoon.  The road had some twists and turns, but nothing that severe.  After a few minutes, we were driving down the road at about ten to fifteen miles an hour. 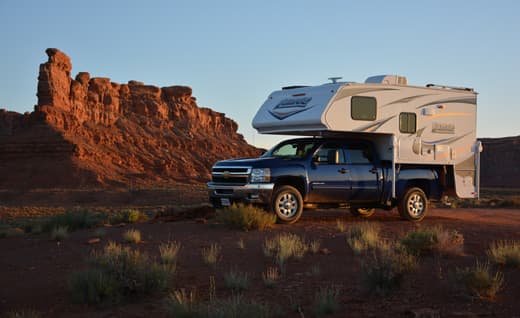 Above: Our campsite in Valley of the Gods

Two or three miles in, we parked the rig at a view point, one of many where you can camp.  These are the moments that make truck camping magical.  What a view!  After dinner, we photographed the sunset and marveled at the red rock formations. 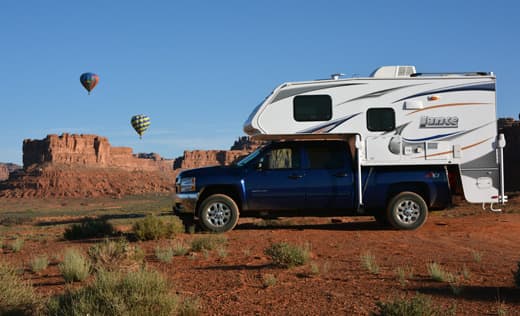 The next morning we awoke with the sunrise to take more pictures.  A caravan of fast driving SUVs broke the peaceful dawn silence and almost disappeared beyond view.  It all seemed rather odd until the fire of hot air balloons illuminated what was happening.  Half an hour later, hot air balloons lifted over the red rocks and drifted along the formations.  We couldn’t have scripted a better morning.

High on life and excited about the rest of the Valley of the Gods Road, we got into our rig and continued towards the west exit.  It didn’t take long until the road began to show its true colors.  What had been rolling curves and hills became more aggressive twists, rises, and falls.  The road conditions, although still gravel, deteriorated with progressively more jarring bumps and dips.  We slowed down, but our rig continued to bounce excessively.

At the next possible opportunity, we disengaged the StableLoad Quick Disconnect Lower Overloads.  Returned to stock, the truck handled the off-road conditions much better and the excessive bouncing was eliminated.  Of course then the flashers returned.  It’s always something.

From these off-road experiences, we feel that the StableLoad Quick Disconnect Lower Overloads should not be engaged for off-road travel.  If your rig is already appropriately matched and well balanced, engaging the StableLoad Quick Disconnect Lower Overloads can make the rear suspension too stiff causing the rig to be overly bouncy, especially on off-road surfaces.

As noted earlier, we also experienced the bouncy effect on the pavement when traversing potholes, speed bumps, rail road tracks, and steep curbs.  If the road presented a jarring feature, the StableLoad Quick Disconnect Lower Overloads would often amplify that feature, sometimes intensely.

If you will be traveling off-road, or in a location with pronounced road features such as potholes, speed bumps, rail road tracks, and steep curbs, we recommend disengaging the StableLoad Quick Disconnect Lower Overloads first.

Given the configuration of our 2013 Chevy Silverado 3500’s rear spring pack and overloads, we may have missed an opportunity to have a better on and off-road experience with the Quick Disconnect sister product, the StableLoad Upper Overload.  We have heard strong praise for the StableLoad Upper Overload from industry leaders and customers alike, but have yet to experience the product for ourselves.  That is an experience we look forward to.