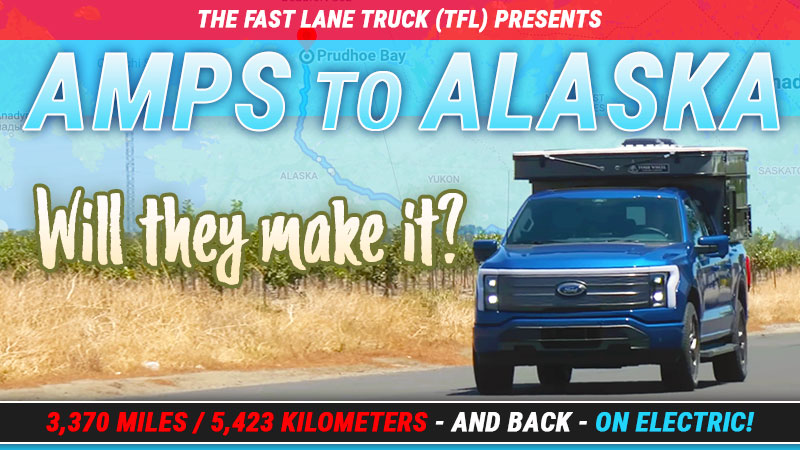 We’ve been following a brazen team from The Fast Lane Truck (TFL) as they are taking a Ford F-150 EV Lightning and Four Wheel Camper Project M from Woodland, California to Prudhoe Bay, Alaska – and back.  The, “Amps To Alaska” adventure is the first real-world test to see if an all-electric truck and camper are potentially viable for long-distance travel.

Four people and two trucks are making the trek. The first truck is the all-electric F-150 Lightning, and the second is a support vehicle: an F-150 hybrid with a built-in generator that can charge the Lightning.

The first episode in the series includes some fascinating tests to see if the Ford F-150 Lightning can charge at a campground and how different truck tires impact range.  For example, they found that a 15-amp, 110-volt outlet would take five days to charge the Lightning to full. You read that right.

Fortunately, they had a 240-volt adapter that would charge the truck to full in 14 hours.  Although it’s unclear, we believe they plugged this adapter into the 50-amp RV outlet.  The tire tests are not nearly as extreme but did yield important range data.

Episode 1 also introduces the thinking behind choosing the Four Wheel Camper Project M, and their testing to see how that camper would impact the truck range.  The TFL team went into this experiment with a clear understanding that electric range would be the top priority. With that focus, they selected the Project M – the lightest camper from an already lightweight and low-profile pop-up camper company.

Episode 2 goes on a factory tour of Four Wheel Campers before returning to the all-electric rig and the final trimmings; one 12-volt AGM in a box with a solar controller and various outlets. The Ford F-150 Lightning has a full complement of outlets in the bed; additional sources of camping power.

TFL and Four Wheel Campers added a minimum number of features to the basic Project M shell and removed anything possible from the overall rig.  As is commonly done with Project M rigs, the FWC crew bolted down the camper and added weather stripping between the camper and bed to prevent dirt and dust from entering.

The TFL team added a deflector (and later another deflector) for aerodynamics, but it’s otherwise a normal and good lookin’ truck and pop-up camper combination. From 50 feet away, most people would have no idea there’s anything different about this set-up.

In Episode 3, the TFL team releases the pedals and steering wheel and lets the truck drive.  If that’s not controversial enough for you, they also take the rig across a CAT scale.  Like nearly everyone who does this, they are surprised at the wet and loaded weight of their camper.  Hey fellas, it adds up.

Back on the road, they share the miles-per-kilowatt differences between the empty Lightning and the Lightning with the loaded camper.  There’s s a definite miles-per-kilowatt hit and one that changes significantly depending on the speed and road conditions.  Like with a gas or diesel truck, they get better range at 60 miles-per-hour than 70.  With the Lightning, the difference is about 20-percent, according to their tests.

After a tour of the Overland Expo Pacific Northwest, they share their mileage performance from Woodland, California.  In that 1,082.4-mile drive, they achieved 1.7 miles-per-kilowatt hour on average, spent $204.91 on electricity, and stopped to charge nine times.  Average speed; 43 miles-per-hour.

Will They Make It?


As you watch the videos, it becomes evident that things are not progressing as TFL had envisioned. The challenge of electric range – exasperated by the weight and aerodynamic drag of the camper – is forcing the TFL team to re-evaluate their driving speed and per-charge distance capabilities.

At one point the TFL team explains that they are sticking to about 33 miles-per-hour, and charging the truck at every possible opportunity. Finding EV charging stations in Alaska is another challenge, but TFL sponsor, Flo Charging, is helping to lead the way.

Will they make it? Given the resourcefulness of the team – and their ability to phone friends at Ford, Four Wheel Campers, Flo Charing, etc. – there is little doubt. However, they are reporting some real challenges that will need to be to be addressed if future all-electric truck campers are going to be viable. 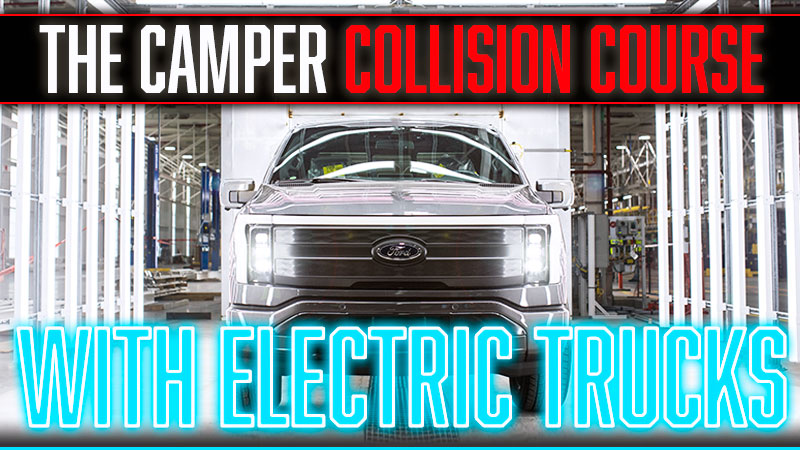 We detailed our concerns about electric trucks in October of 2021 in the article, “The Camper Collision Course with Electric Trucks”. If electric trucks are the future, we have some work to do.

Of course, we are 100-percent rooting for the TFL team. We are envious of their pioneering run and wish them a successful trip. We also encourage them to continue with their straight reporting.

The following links take you to three short vertical videos (made for social media) about their trip. They are planning to post updates every Saturday, but seem to be exceeding that goal.

Alaska Adventure Would Not Be Possible Without This Charger

Improving The Ford Lightning With A Custom Accessory

We Made It To The Arctic Circle