For the past few years, Palomino RV has been on a roll.  In 2013, they debuted the 2911 double-slide and partnered with Torklift International to develop the Landing Pad extended rear storage bumper.

Last October, Palomino RV set their truck camping design on stun and launched a large automotive-style front windshield and wrap-around fiberglass nose cap that took just about everyone in the truck camper community – including us – by surprise.  Then they re-worked their floor plans, finessed their cabinetry, updated their table tops, and debuted a next-generation in-wall slide mechanism.

For 2016, the news is, quite understandably, not quite as ground breaking.  Beyond their pioneering Line-X coated Body Armor Edition, the 2016 Palomino truck camper announcements are mostly about making their existing models better.   A pop-up camper gets a north-south cabover, cabinetry and storage has been enhanced, and wall treatments and fabrics have been updated.  And yes, Palomino RV got the memo on the interior LED ambient lighting trend.

The most exciting news is what Palomino RV is working on to push their quality control forward.  The shine bay, as they call it, promises to make Palomino truck campers not just a value leader, but also a more competitive product based on quality.  Clearly we need to get into the Palomino factory and see this shine bay for ourselves, but we are already thrilled with the concept.

To find out exactly what has changed for 2016, including the shine bay, we contacted Pat Hines, Director of Camper Marketing for Palomino RV.

TCM: Are there any Palomino RV truck camper models being discontinued for 2016?

Pat: No, we are not currently discontinuing any truck camper models for 2016.

Above: The Palomino SS-1251 pop-up model is now offered in a north-south overcab configuration – click to enlarge

TCM: Other than the new Body Armor Edition, are there any new Palomino truck camper models for 2016?

Pat: No, we are not introducing any new models for 2016.  2016 is mostly a refinement year for our truck campers.

We are debuting a significant revision one of our most popular pop-up truck camper models, the SS-1251.  We have changed the SS-1251 from an east-west cabover to a north-south cabover.  This follows the success of the north-south configured SS-550 and the SS-1240.

Dealers and customers have asked us to change the SS-1251 to north-south, and we are excited to offer that change for the 2016 model year.

To accommodate the longer cabover, we went to a stronger and thicker laminated cabover structure.  The north-south cabover change eliminated the under bed storage, but added two large hampers running the length of the cabover on either side of the bed.  The hampers offer about the same amount of storage as the under bed storage area and are accessible without needing to lift the bed.

Above: Cabinetry and a netted cubby hole was added to the Palomino SS-1251 pop-up model – click to enlarge

Additionally, we extended the overhead cabinetry in the SS-1251.  We also added an additional netted cubby hole.  Obviously, storage is king with truck campers.  We found some unused real estate so we added some new storage areas.

TCM: How much weight did the north-south cabover and new cabinetry add to the SS-1251?

Pat: The north-south cabover and cabinetry added about 86 pounds.  The change also moved the center of gravity forward.

TCM: Do you think you’ll change any other pop-up models to a north-south cabover?

Pat: The other Palomino pop-up models will likely stay east-west for the near future, but we are considering further north-south changes.

Above: The automotive-style front windshield on the Palomino Max truck campers – click to enlarge

TCM: Last year Palomino stunned the truck camper community with a large automotive-style front windshield.  How has that been received since the debut? 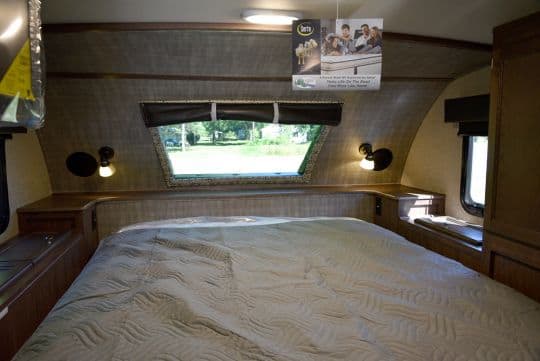 Above: The dedicated roll-up fabric shade featuring Astro-Foil reflective bubble foil insulation on the interior of the windshield – click to enlarge

TCM: It appears that the interior surrounding the front windshield area has been changed.

Pat: The windshield we debuted at the Elkhart open house last year was a prototype.  Since then we have made many refinements including improvements to the interior materials and finish around the windshield itself.  For example, the valances now match the interior fabrics and there’s a dedicated roll-up fabric shade featuring Astro-Foil reflective bubble foil insulation. 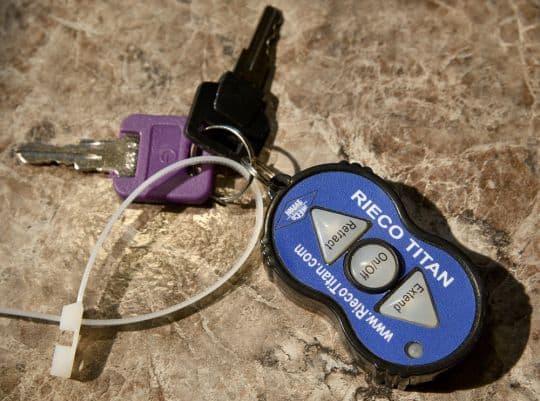 TCM: Now that you have had the Rieco-Titan electric pop-up roof lift system for two years, how has that system been received?

Pat: The Rieco-Titan electric pop-up roof lift system has been a tremendous success.  Rieco-Titan is a great partner.  Doug Bakker from Rieco-Titan is here at least once a month to make sure things are going smoothly.  He also talks to dealers, and takes our feedback to make an even better product.

TCM: Have there been any changes or updates to the Rieco-Titan electric pop-up roof lift system in that time?

Pat: There have been a handful of refinements.  We went from not having a manual on-off switch to now having one.  There have been some tweaks that Rieco-Titan has done to upgrade the electronics.

With our total pop-up redesign in 2014, we went from an entry-level pop-up truck camper to the top-of-the-line overnight.  The Rieco-Titan electric pop-up roof lift system was an important part of that successful effort.  We have definitely seen an increase in truck camper pop-up sales since the launch of the Rieco-Titan lift system.

There’s no doubt that Palomino offers the best bang for the buck in the pop-up and hard side truck camper industry.

TCM: What’s the idea behind the new radius dinette seats?

TCM: While we certainly appreciate the radius look, some might miss the interior storage that was available with the more traditional dinette seats. 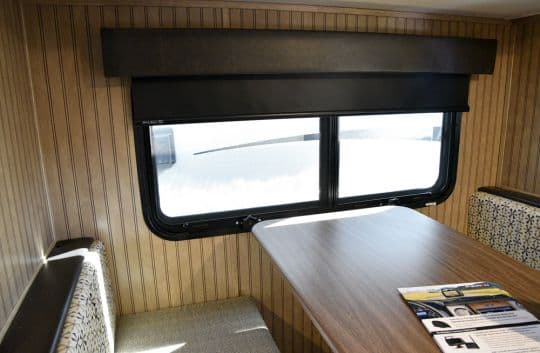 Above: The bead board accent wall – click to enlarge

TCM: When we were exploring the 2016 Palomino line, we noticed the new wall treatments and fabrics.  Tell us about these new interiors, and how they came to be. 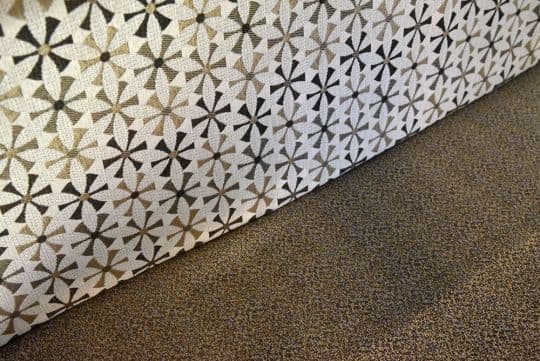 Above: The Palomino interior fabrics for 2016 campers – click to enlarge

Above: The LED ambient lighting throughout the Palomino Max campers – click to enlarge

Pat: That started with our Solaire and Palomini travel trailer line.  Rob Foster, our Production Manager, was tasked with putting LED ambient lighting under the kitchen countertops and slide-outs. 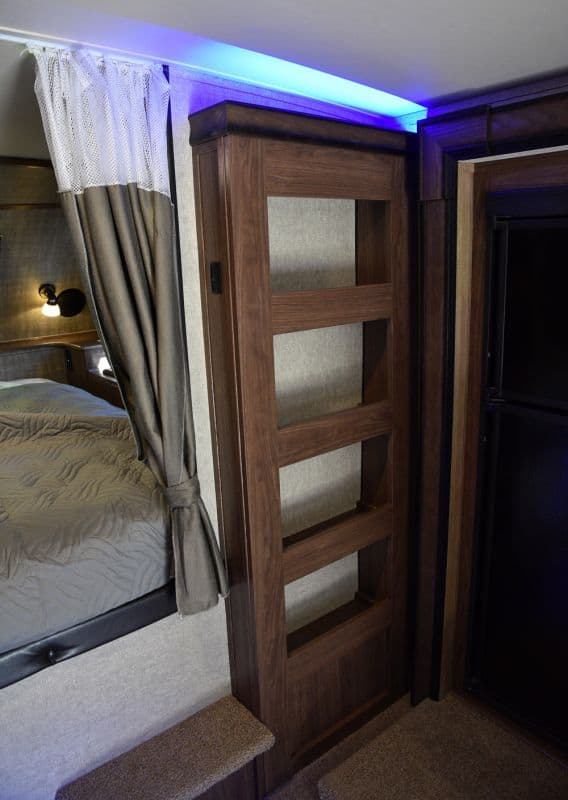 We have also added a gigantic open air pantry in the 2910 and 2911 with some lighting there.  The LED ambient lighting is the ultimate night light. 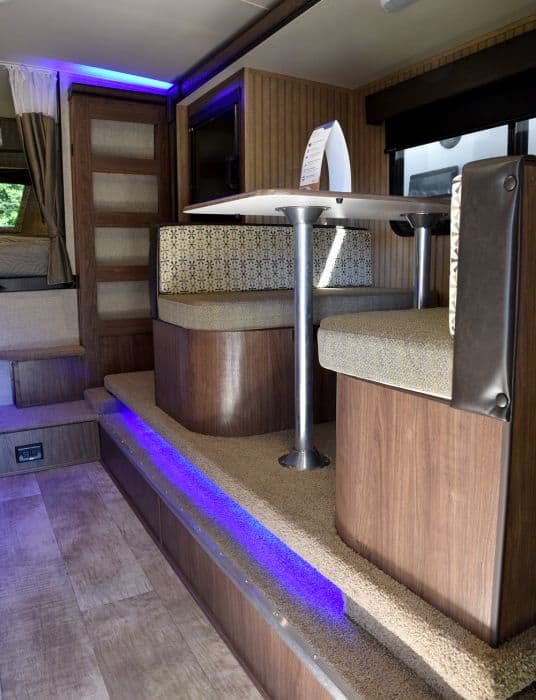 Above: The LED ambient sliding under the slide-out – click to enlarge

TCM: Why did Palomino go with blue?

Pat: Actually, we introduced LED ambient lighting in both blue and white at the dealer open house to gauge dealer reaction and will make our color choice soon.

TCM: Where’s the on-off switch for the LED ambient lighting?

Pat: There is a switch right at the cabover entrance to turn it on and off.  LED ambient lighting is a standard feature for the hard side Max models; 2902, 2910, and 2911.

Above: The new glass top Suburban range top and oven – click to enlarge

TCM: The new glass top Suburban range top and oven is quite attractive.  Is that a standard or an option on the hard side models?

Pat: That’s a standard feature for 2016 on the hard side Max line.  The glass top is flush with the counter top creating additional usable counter space when you’re not using the range.  It’s a tempered glass material, so it’s easy to clean.

Pat: The roller shade is featured on our Elite package as standard.  The roller shades offer superior functionality, ease of use, and improved black-out shading.  They all look good. 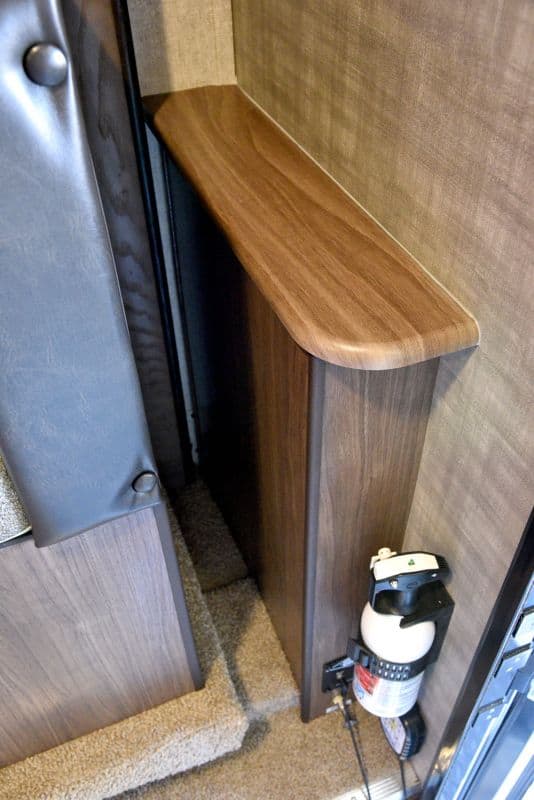 Above: The new shelf behind the dinette – click to enlarge

TCM: What is the purpose of the new shelf behind the dinette?

Pat: It covers the box which contains the wiring for the taillights.  We decided it would look better as a small shelf. 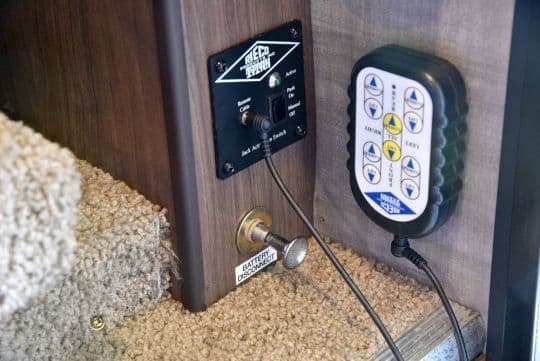 Above: The camper jack controls and battery disconnect switch immediately inside the rear entry door – click to enlarge

We also moved the jack control switch and battery disconnect to the passenger’s side to make it more user friendly.

Pat: The Space Dock receiver and Lock and Load SideKick is a great application and accessory for our Landing Pad bumper.  It was well received by our dealer partners at the show, and we believe customers will like it.  It’s not necessarily in stock and on display at dealerships, but it is readily available.  It is currently in production and ready to sell. 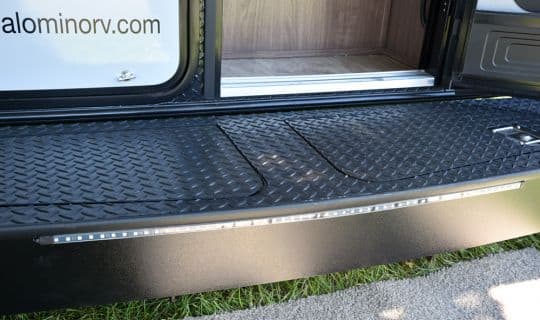 Above: LED lighting is now included on the Palomino Landing Pad – click to enlarge

TCM: What is the warranty for 2016 Palomino truck campers?

Pat: There is a one year bumper-to-bumper warranty, and the individual appliances have their own warranties.

TCM: When will the 2016 Palomino truck campers be available?

Pat: 2016 Palomino truck campers are on dealer lots as we speak.

Pat: Currently there is no price increase on truck campers for 2016.

Above: The Shine Bay is a new quality control initiative at Palomino RV – click to enlarge

TCM: When we were at the Elkhart open house, we heard about a new quality control initiative at the Palomino factory.  What can you tell us about that?

Pat: We want to build a better product for the end consumer.  The 2016 Body Armor Edition and camper upgrades are great, but we are more excited about the new quality control processes that have been put in place.

Specifically, we have implemented what we call a shine bay.  The shine bay is a dedicated facility that every Palomino RV product, including all hard side and pop-up truck campers, has to pass through before it can leave the factory.  Inside the shine bay, every camper undergoes a full PDI including checking all systems and flooding the holding tanks.  Campers are also inspected visually.

TCM: Do the Palomino team members in the shine bay have the authority to prevent a unit from shipping if they find a problem?

TCM: As a magazine, we strongly believe that quality, quality control, and customer service are the biggest and most important opportunities in front of the truck camper industry for 2016.  We applaud Palomino for taking this effort on, and look forward to the results.

Pat: More than anything else we are doing, the shine bay is what I am most excited about.  Of course we are also working on some exciting announcements for next year.  We are not resting on our laurels.

For more information on Palomino truck campers, visit their website at www.palominorv.com/TruckCampers.