Keith Fisher, Lead Engineer at Palomino RV, was very excited to see us at the annual Elkhart Open House mid-September.  Having just driven past his new creation, we knew exactly what he wanted us to see.  In fact, I don’t think anyone who drove C.R. 6 that morning missed his latest creation.  Honestly, it’s a miracle no one drove off the road trying to get a better look.

On four corner jacks before us was a Palomino HS-2910.  We had seen this camper before, but never like this.  An all-new gelcoat fiberglass wrap-around front nose cap incorporating a huge automotive windshield made the 2910 look like no truck camper we had ever seen before.  With its new cap, the 2910 was almost something out a science fiction movie; a giant robotic praying mantis, ready to devour the habitants of Northern Indiana.  Run for your lives!

Truck campers in 2015 shouldn’t necessarily look like they did in 1975.  The advancements in material science, technology, and style have changed in ways most folks could not have imagined forty years ago.  We’re not all wearing aluminum foil ties and carbon fibre leisure suits, but we’re carrying around pocket computers that make phone calls and sharing what we ate for breakfast on the inter-webs.  It’s the future man!  So what’s here?

Keith Fisher and the Palomino RV team have served up a vision for what the future of truck campers should look like.  More importantly, their vision has form and function that advance the state of Palomino’s truck campers, and will challenge the rest of the industry to re-evaluate the concept of front windows.  The era of truck campers with automotive windshields has begun.

TCM: Tell us how the project for a new front nose cap began at Palomino RV.

Keith: The idea started in our war room where we develop our new product plans.  After the meeting, I contacted our industrial designer who specializes in gelcoat fiberglass caps.  We gave him some direction and sent him the 3D computer models of our truck campers.

The moment of truth came when we approved a final design.  After another meeting, we decided to bite the bullet, order the window, and get the cap and mold moving forward.

Above: The AutoCAD renderings of the 2015 Palomino Max campers with the new nose cap – click to enlarge

TCM: That must have been an exciting moment.  Tell us about developing the windshield.

Keith: The development of the windshield was one of the most challenging parts of this project because we only had one opportunity to get it right.  I had a lot of faith that it was going to come out right, but there were definitely some sleepless nights.

Once the windshield had been designed by our supplier, Guardian Custom Glass Solutions Group, they made one windshield and sent it to us for testing.  That was a very expensive windshield.  We were extremely careful while handling it.

Before we installed the windshield into the cap, we consulted with our sister Forest River company, Georgetown.  Georgetown manufactures Class A motorhomes.  They told us exactly what adhesives to use, and gave us some tips on how to properly install the windshield.  With their recommendations, we ordered a case of DOW automotive adhesives.

When it was time to actually install the new windshield into the new gelcoat fiberglass cap, Guardian sent a representative to help make sure everything worked as planned.  I was literally under the cap on a skid as they applied the sealant and dropped the window in.  It fit perfectly. 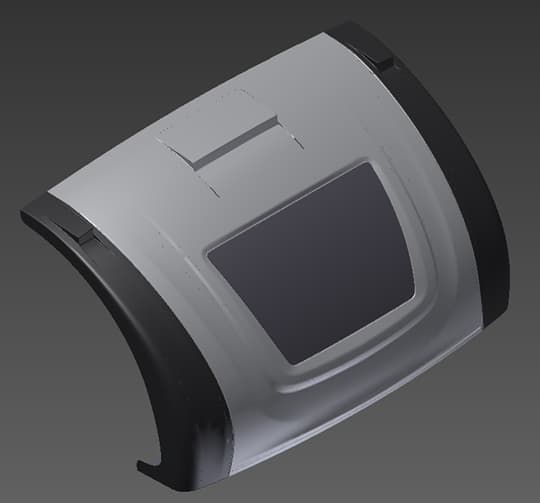 Above: The AutoCAD model of the new nose cap with windshield

TCM: The very first thing most folks are going to think is, “Wow, that’s interesting, but isn’t it going to leak like all the old-style front windows used to do?”

Keith: It’s not a RV window.  It’s an automotive windshield.  The windshield is manufactured and guaranteed to the same standards as the windshields in our cars, trucks, and SUVs.  The sealant is literally the same sealant used by GM, Ford, and Ram to install their windshields.  It’s an industrial automotive sealant that’s only available directly from DOW chemicals.

Again, this is not an RV window made by an RV supplier.  The windshield was made by Guardian Custom Glass Solutions Group.  In addition to manufacturing windshields for the Big Three, Guardian makes windshields for trains, fire trucks, and big rigs. 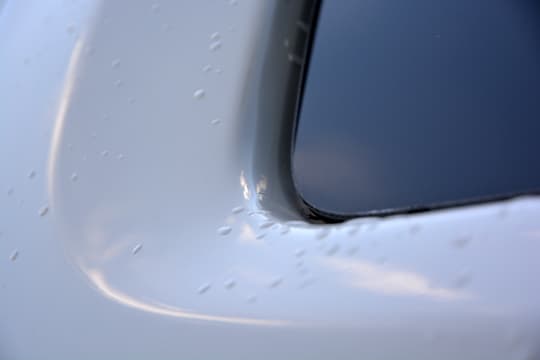 Above: The windshield was made by Guardian Custom Glass Solutions Group, a vendor for GM, Ram, and Ford.  The water droplets are from a passing rain shower

TCM: How did you test the windshield once it was installed?

Keith: We poured gallons of water on it and left it for twenty-four hours.  At that point, the adhesive hadn’t even fully cured, but it held.

Our units are also bubble tested on the production line.  We close all of the doors, windows, and hatches tight, pressurize the interior of the camper, and spray the outside of the unit with soapy water.  If there’s a break in any seal, anywhere on the camper, it shows up as bubbles.  If we find any seal breaks, they’re fixed at the factory before leaving the plant.

We partnered with the best companies available for this project; Guardian, Dow, and Georgetown.  These organizations know what they’re doing, and do it well.

TCM: Talk to us about designing and developing the new gelcoat fiberglass front nose cap.

Keith: Again, we partnered with the right people.  We used the same vendor that makes our gelcoat fiberglass front caps for our travel trailers.  They brought a lot of experience to the table. 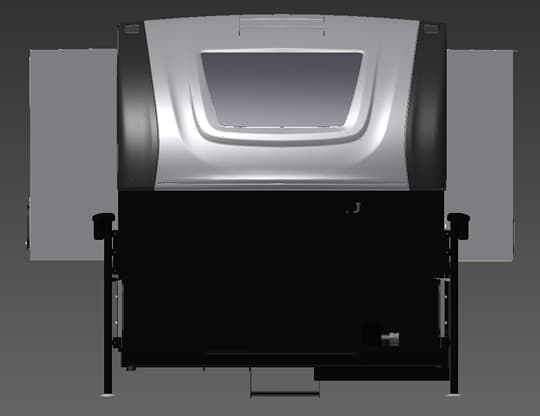 Above: AutoCAD computer drawing of the Palomino 2911, double slide camper with the new nose

TCM: Were there any considerations given to aerodynamics?

Keith: I have access to computer software that simulates a wind tunnel and the new nose cap performed well.  The cap is slightly barreled perpendicular to the roof side both up and down.  That reduces turbulence.  With aerodynamics, it’s all about how you get the air around the camper.  Even subtle changes, like how we tapered the nose cap make an important difference. 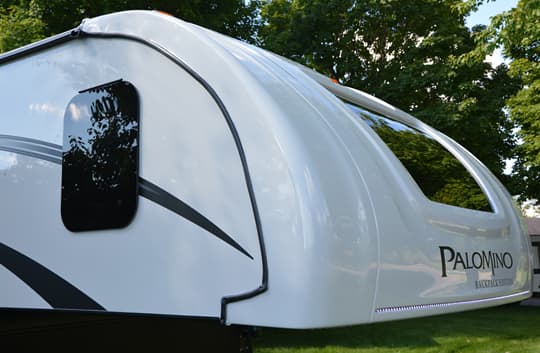 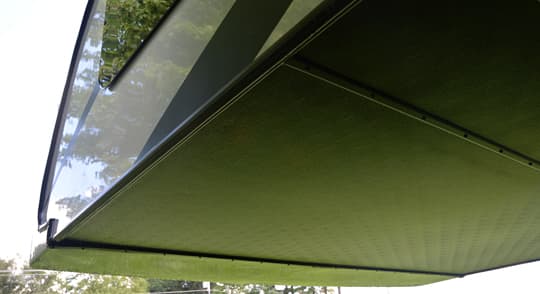 Above: There is a six-inch overlap under the front nose

TCM: How many inches does the cap overlap the overcab of the camper? 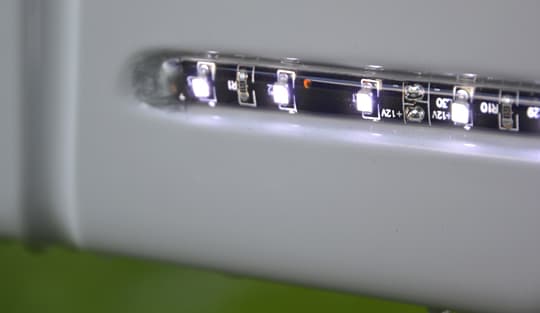 Above: Close up view of the LED strip on the front nose

TCM: The LED strip on the front nose is really neat, but owners will want the ability to turn them on and off.  How does that work?

Keith: There is an independent switch inside the camper to turn the LEDs on and off.  The switch is located on the control panel next to the front door.

TCM: Is the LED strip replaceable should it get damaged by a tree limb or a bad storm? 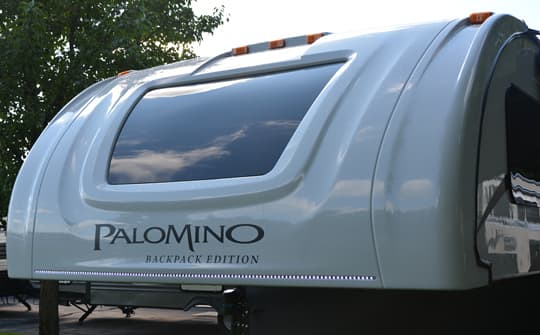 TCM: Why not make the front nose out of TPO; thermoplastic olefins?

Keith: We decided to use gelcoat fiberglass rather than an automotive TPO (thermoplastic olefins).  While TPO is often used for automotive bumper facias and instrument panels, it’s not nearly as strong as gelcoat fiberglass.  If TPO is not properly braced, it can dent into itself from wind load.  Gelcoat fiberglass is a much stronger material.  It’s also more production friendly.

Above: The interior of the Palomino campers with the new nose cap and windshield – click to enlarge

TCM: How did this new nose cap and windshield affect the interior design?

Keith: We completely updated the overcab of the 2902, 2910, and 2911 based on this new nose cap and windshield.  We gained a lot of interior real estate which enabled us to design a wrap around nightstand shelf behind the bed. 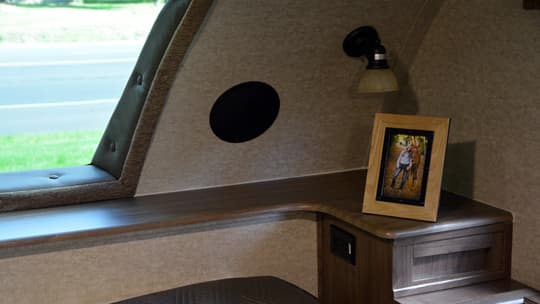 The nightstand shelf gives you space for tablets, books, and even a picture frame.  Nothing on the market has anything like this.

Above: A wrap-around shelf is incorporated into the design of the new nose cap

Combined with our new for 2015 barrel roofs, the nightstand shelf, front windshield, and new cabinetry make the overcab area a much more livable space.  It feels like an open and inviting room up with more headroom and light.

TCM: Having seen it in person, we have to agree.  How does someone shade and insulate the front windshield at night?

Keith: We’re working on that right now.  We want to provide an improved R factor to insulate the front windshield.  We’re also developing a shade that will work with the shape of the windshield.  When those solutions are completed, we will send you photographs and information to publish in TCM. 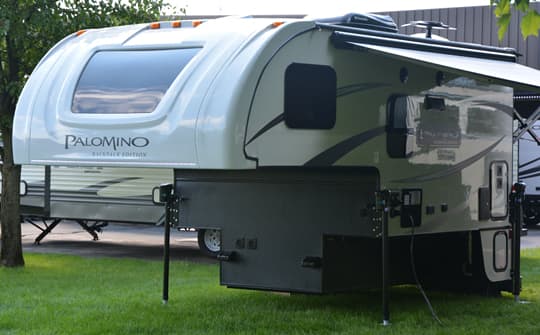 TCM: Are the windshields and gelcoat fiberglass nose cabs manufactured in the United States?

Keith: Yes, they are.  The gelcoat fiberglass nose caps come from a manufacturer two hours south of us in Indiana.  They make our travel trailer caps as well.  The windshield comes from a plant about three and a half hours east of us.

Everything, including the DOW adhesive, comes here to Palomino RV in Colon, Michigan for assembly in a new clean area developed specifically for this purpose.  We also now have a trained team that specializes in installing the windshields. 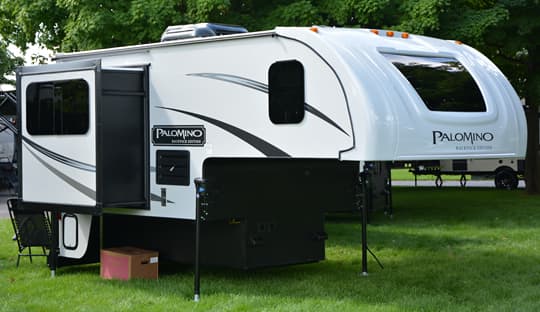 TCM: On what 2015 Palomino models will the new windshield and front nose cap be available as an option?  And what will this option cost?

TCM: Since the windshield and front nose cap are new, what will the warranty be on these elements and materials?

Keith: The warranty of the windshield and front nose cap is included in your twelve month warranty. 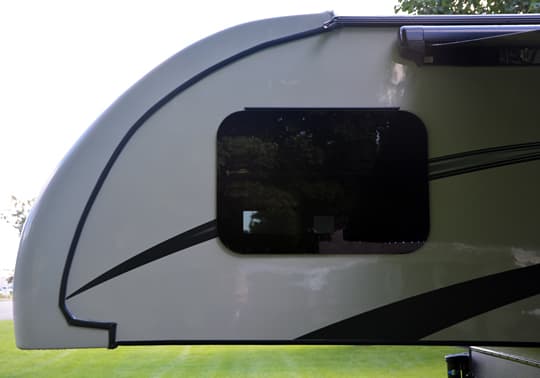 Above: This is the first prototype of the new nose cap; the production units will be refined and ready for shipment in late November 2014

TCM: When do you expect to have this new windshield and nose cap at RV shows and dealer lots?

Keith: We are still a few weeks away from getting the first production run of nose caps and windshields.  Based on the existing schedule, we should be shipping units by late November.  You will definitely see the new front cap and windshield at the 2015 RV shows.

We are making a few more refinements from the two prototypes you saw in Elkhart.  For example, there’s a jagged edge on the sides of the front nose in the photographs.  That has been contoured to make for a smoother transition.

We are really looking forward to the public seeing these campers in person.  I think they’ll be blown away by the look, both outside, and inside.

For more information on 2015 Palomino truck campers, visit their website at palominorv.com.  Request a Palomino brochure.