Rieco-Titan partnered with Palomino RV to develop a new pop-up truck camper lift system with wireless key fob remote.  This is the story of how they made it happen.

It’s easy for a business or industry to get stuck in a rut, churning out the same old products year-after-year.  As the saying goes, “If it’s not broke, why fix it?”

There are hundreds, if not thousands of examples of innovation transforming an industry, or eliminating it.  What happened to the buggy whip industry with the proliferation of automobiles was so devastating that buggy whips have become a symbol of innovation making old technology obsolete.  Today, every industry and business must continuously move forward, or risk becoming the next buggy whip.

When Palomino RV contacted Rieco-Titan about developing a new lift-system, they probably had no idea how much innovation Rieco-Titan would unleash.  The result of this collaboration is a system that starts out lighter, smaller, and faster, and then gives us a wireless automotive-style key fob remote.

We are very excited about Rieco-Titan’s new lift system and applaud their collaboration with Palomino RV.  We need more examples of innovation in the RV industry.  Let this story be the inspiration, for more innovation.

TCM: How did this project get started?

Bob: Palomino RV came to us because they’ve had no problems with our Rieco-Titan camper jacks.  They wanted us to design, develop, and produce an equally successful all-new electric pop-up roof lift system.

During our initial consultations, we worked with Keith Fisher, Lead Engineer, and Rob Foster, Production Supervisor, at Palomino RV.  Keith explained the design parameters for the new lift.  With Keith’s parameters, and Rob’s production experience, we designed and built the first prototype.  When we presented it to Palomino, they said it was too heavy, too big, and too expensive.

With that feedback, we did some modifications and presented them with a revised prototype.  Once again, it was too heavy, too big, and too expensive.  That told us we needed an entirely new approach.

Doug Bakker, our Product and Tooling Designer, came up with an entirely different drive system; a linear actuator similar to what’s used to move electric seats in a car.  This idea was a real breakthrough.

Using linear actuators, Doug was able to make the lift system significantly lighter, smaller, and less expensive.  When we presented the third prototype to Palomino RV, they loved it.

TCM: Is that when the product testing began?

Bob: Yes.  We installed the roof lift into a pop-up camper for Palomino to test.  From there we tuned the product, and did extensive life-cycle testing in house.  For starters, we tested the lift actuator with over 200 pounds for more than 2,500 cycles.  It came through with flying colors.

The testing also proved that we were well within Palomino’s design parameters. 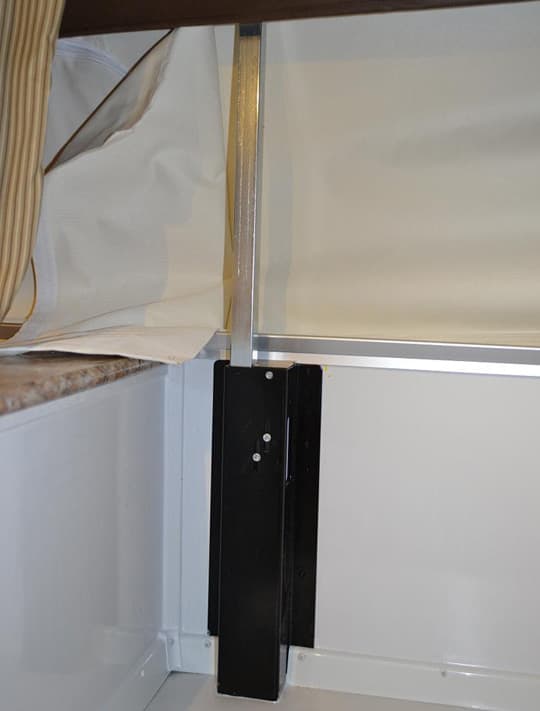 Above: The new lift system in the Palomino pop-up campers

TCM: Did Palomino RV conduct their own tests?

Bob: They sure did.  Palomino had the lift system installed in a camper, lifting and lowering the roof twenty-four hours a day, seven days a week, for several weeks.  To make their test even more rigorous, they installed two air conditioners on the roof.

When the lift system passed that test, they tilted the camper at ten and then twenty-degree angles and ran the test for an additional 500 cycles each.  This was done to test the roof lift during imperfect, but realistic situations.  People often pull over and camp in less than level campsites.

After all that testing, we knew we had a viable and successful product.  It was the right weight, size, and price.  It could go for thousands of cycles with increased load at off-level angles without issues.

TCM: Tell us about the materials and manufacturing process for the new lift system.

Bob: The new lift is made from steel, is all American made, and is able to handle an unbalanced load, while remaining stable.

We went through a quite few linear actuators before finding the right model.  It had to be very fast.  The first few we found weren’t fast enough.  The right motor size and load capability were equally critical.  It also had to be priced right.  We worked with the actuator manufacturer to achieve the Goldilocks actuator; a model with exactly the right speed, load capability, and price.

The next challenge was designing a roof bracket.  Doug went through several designs before finding one that fit Palomino’s requirements.

TCM: How did you test the new lift system for safety?

Bob: That’s an excellent question.  We did a lot to make the new roof safe.  To prevent a collapse, we put in safety bars.  Our exhaustive testing determined that even if two of the four lifts in a camper failed, the roof would not collapse. 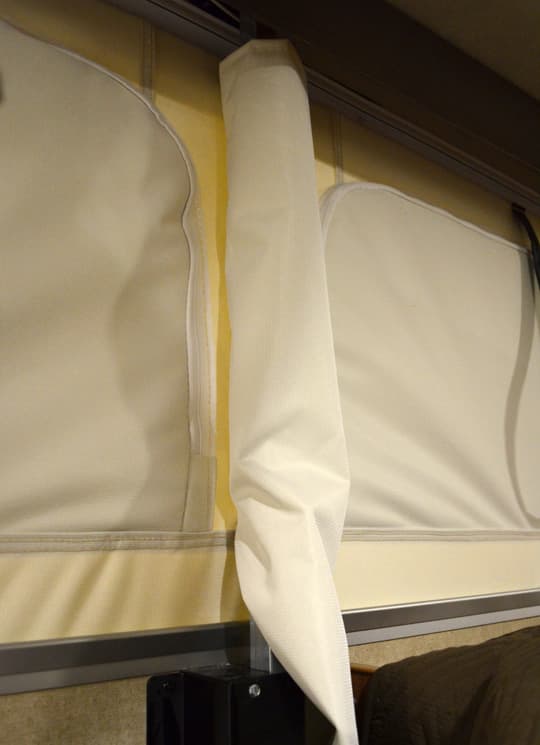 Above: Palomino puts canvas covers on the lifts to make them blend in with the pop-top

Bob: It does, but in a good way.  The Palomino RV truck camper production team was very excited about how much time they saved installing the new lift system over the previous system.  The new system is also less parts, which is another significant advantage for the Palomino RV production line.  Everything just fell into place. 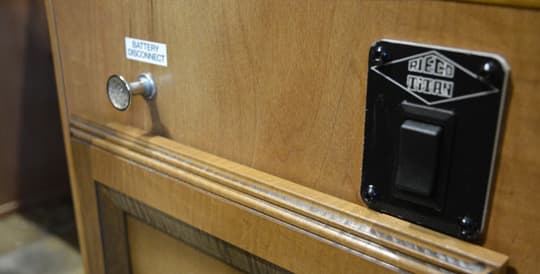 Above: The permanent built-in rocker switch located just inside the rear entry door

TCM: We love the new key fob wireless remote, but is there another way to activate the new lift system? 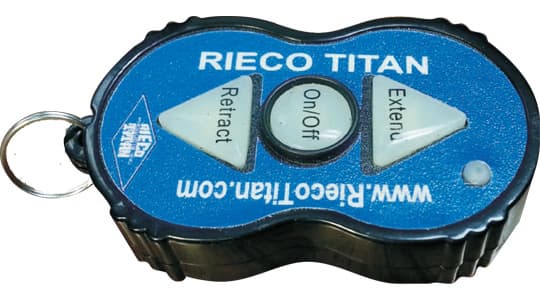 Above: The key fob remote that comes with the pop-up campers

TCM: What happens if someone loses their key fob?

I should also point out that there’s an additional raise and lower switch on the lift system receiver.  Furthermore, if the electrical lift system were to fail, you can manually crank the pop-top up and down.  You would need to use an electric drill to run them, but you can raise and lower the roof manually.

TCM: Does the new lift system require any maintenance?

Bob: The key fob works with two watch batteries.  You should replace them once a year or so.  There is no maintenance on the lift system’s steel structures.  We’re using same teflon grease that’s on our jacks so they should not need additional lubrication.

TCM: What is the warranty on the Rieco-Titan lift system?

TCM: Is there anything else that you would like to add?

Bob: Palomino RV truly partnered with us.  Our relationship with Keith Fisher, Don Hoover, Nate Nickell, and Don Cope was instrumental in getting it going.  They were honest and open with us during the design.  That was a big factor.

There was no guessing as to what they wanted, and were we stood during design and production.  We knew what the target was.  From my point of view, that was the key.  Collectively, we had a great team.

For more information on Rieco-Titan, visit their website at www.riecotitan.com.  Request a free Rieco-Titan brochure.