Recently there has been a steady progression towards model year refinement and evolution throughout the truck camper industry.  We still see new floor plans being announced, but more often we see popular floor plans tweaked, maximized, and enhanced (aka, TME) to launch a new and improved model.

As a clear example of this trend, the new Lance 1062 floor plan appears to be nearly identical to the outgoing 1052 model it replaces.  So what’s so exciting about the 1062?  It’s been tweaked, maximized, and enhanced!  In other words, the Lance design team studied what made the 1052 work, and developed important structural, feature, and cosmetic changes to make the new 1062 even better.  Lance Campers felt the improvements were more than enough to give the new camper a fresh model number.

Truck Camper Magazine is a strong supporter of the industry’s renewed focus on truck camper designs that don’t just wow on the internet, RV show floor, and dealer lot, but work well for the consumer over the long haul.  We encourage them to continue tweaking, maximizing, and enhancing the most popular floor plans.  Of course we also encourage them to reach with bold new designs, strive for innovation, and relentlessly push forward on quality.  As an industry and community, we need all of the above.

To get the full story behind the new 2016 Lance 1062, we talked to Gary Conley, National Sales Manager, and Randy Hunter, Product Development for Lance. 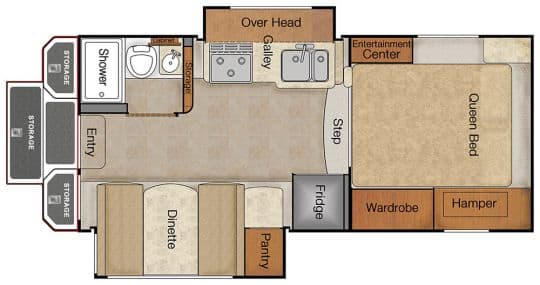 Above: The passenger’s and driver’s side of the 1062 – click to enlarge.  All photography and digital renderings provided by Lance Campers. 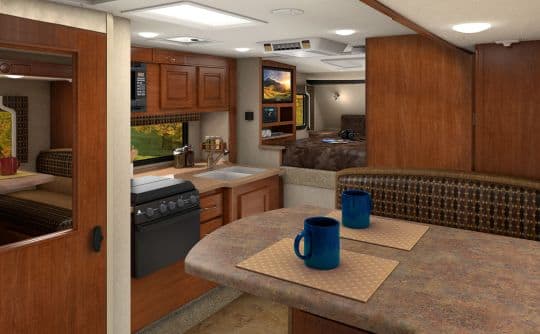 Above: A digital rendering of the 1062 dinette and kitchen – click to enlarge 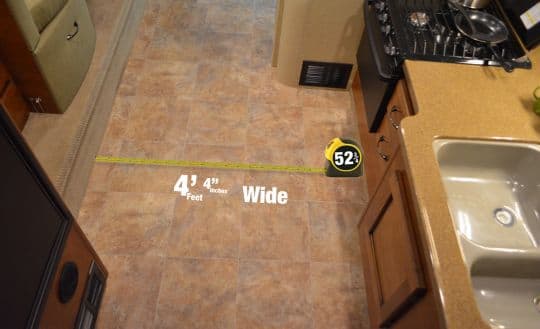 Above: The 52.75-inch wide floor with slide-outs extended – click to enlarge

Above: Frameless windows are standard in the 1062, with a bigger dinette picture window and an added window in the slide room rear – click to enlarge

TCM: We are fully expecting photographic proof of that last claim.  Are there any other updates on the 1062 that differentiate it from the outgoing 1052?

Gary: We have eliminated the sliding windows and moved to frameless thermal pane torque windows.  We also increased the width and height of the entry door for easier and more comfortable entry. 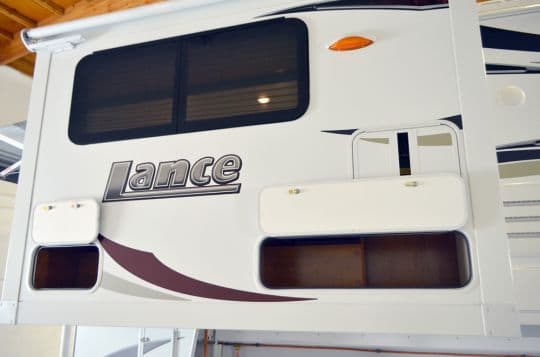 Above: The new exterior centralized storage compartment – click to enlarge

TCM: When we were at Lance Campers this past May, you were prototyping the 1062.  Since this is a relatively modest structural update to an existing floor plan, what were you testing during the prototype phase?

Randy: We were primarily testing the new lateral truss design for the 12-inch basement height.  We were also integrating a new basement pull-out tray and an exterior centralized storage compartment, two big features that were not available on the 1052.

Prototyping is a very important part of the process of designing a new production ready Lance Camper.  Every new camper we produce is built and tested as a prototype. 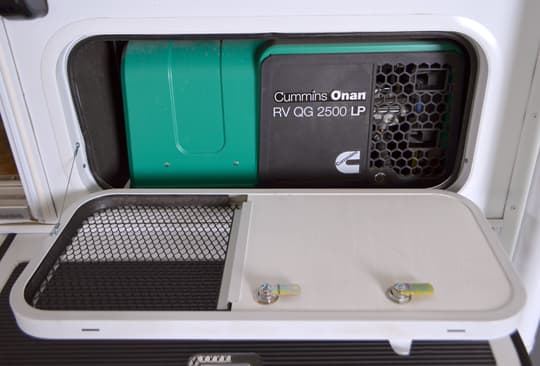 Above: A built-in Onan generator is an option in the 1062

TCM: Were there any new materials, components, appliances, or processes used in the development of the Lance 1062?

Gary: The materials, construction processes, and appliances are unchanged from the 1052.  We’re still using our one piece molded counter top and inner spring mattresses.  We were already using the best generator, refrigerator, water heater, and furnace.  Any changes to those features would have been a downgrade. 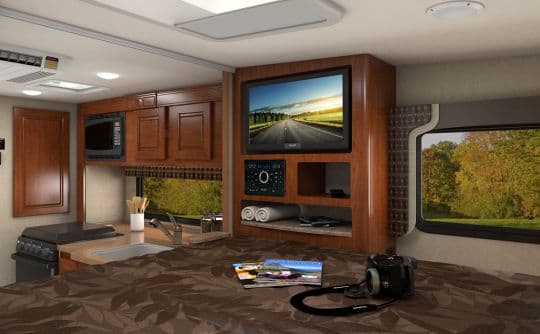 Above: A digital rendering of the cabover and app-based stereo system – click to enlarge

One feature that is new and improved is the app-based stereo system.  Through Bluetooth on your smartphone, you can control the volume of the interior and exterior speakers.

Above: The Happijac Secure-Trac (left) and the Lippert Schwintek (right) slide mechanisms on the 1062 – click to enlarge

TCM: What slide mechanisms does the Lance 1062 use?

TCM: One of the key changes for the new 1062 is the 12-inch basement.  What’s the big deal about going to a 12-inch basement?  If you want more floor space and a bigger basement, why not build rail height?

Our goal is to build a camper for a stock truck with minimum suspension enhancement products.  We manufacture truck campers for someone who wants to buy a camper and use it as a weekend unit, and have their truck for the rest of the week.  We believe you shouldn’t need to change the brakes, axles, and tires to handle a modern truck camper.

TCM: Did the size of the holding tanks change in the 1062?

Randy: They are still 45 gallons fresh, 27 gallons grey, and 22 gallons black, same as the outgoing 1052.  With the taller basement we were able to move the holding tanks forward and improve the drain flow by having the grey and black tanks nest together.

TCM: Are there any changes to the size and placement of the batteries or propane tanks in the 1062? 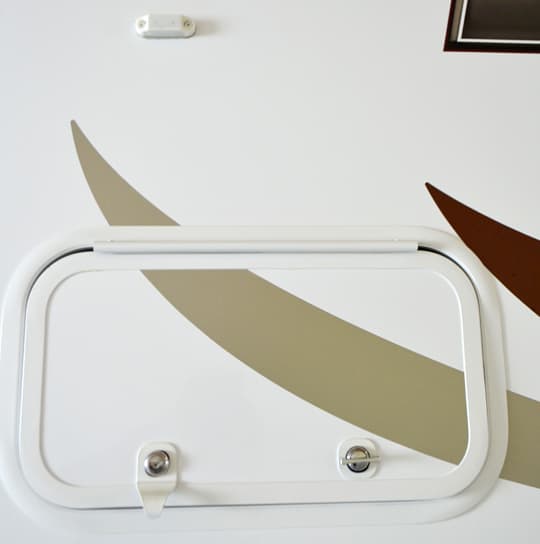 Above: Magnetic storage door latches (top center-left) are included on the 1062 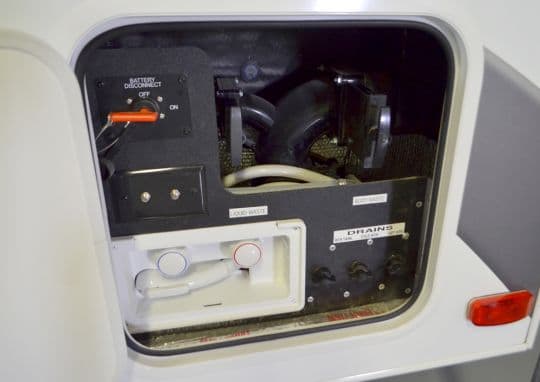 Above: The Torklift International Ultra Deck Plus option on the 1062 – click to enlarge

Randy: One new option for the 1062 is the electric rear awning.  The Ultra Deck Plus or Lance Deck bumpers continue to be available for the 1062. 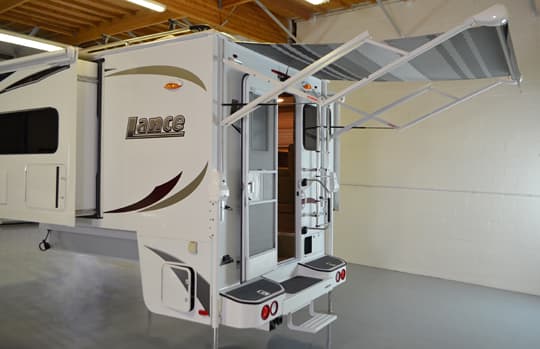 Above: The 1062 has an optional rear power awning

TCM: Raising the basement height and increasing the width of the floor should have had the affect of increasing the weight of the unit.  Were you able to off-set the weight increase, or does the new 1062 weigh more than the outgoing 1052?

Gary: There is a 128 pound weight gain for the 1062.  We believe the wider floor space and taller basement is well worth the small increase in weight.  Relatively speaking, truck campers are not big.  The more floor space we can give the customer, the better.

TCM: What does the 2016 Lance 1062 weigh with standard build features, and what is the center of gravity?

Gary: All Lance Campers have a 2-year structural warranty, and a 12-year roof warranty.  There are extended warranties for the individual appliances.

We also have road side emergency services available for all of products.  If your slide room gets stuck and you are unable to move it, you can call for a mobile dispatch.  For anything that would prevent you from going down road, just call the 800 number and someone will come to help you. 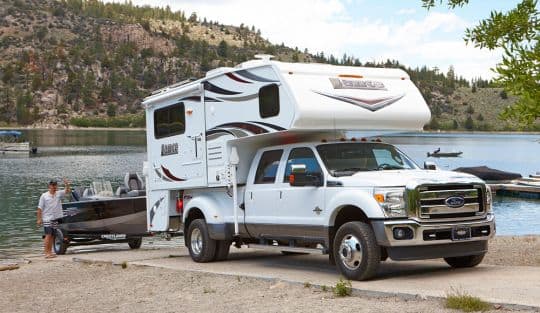 TCM: Are there any other new model announcements coming from Lance Campers in 2015?

Gary: We are coming out with a half ton friendly, short bed truck camper.  This is something that will go on the 2016 Ford F150 aluminum truck.  You should be able to match the wet weight of this camper to that truck and not exceed it.  We’ll debut it here in Truck Camper Magazine, so stay tuned.