The first few hours of Overland Expo East 2014 looked more like Woodstock than anyone could have possibly prepared for.  Put it in four-wheel drive low, winch-up, and read on.

It was the kind of rain that gets folks thinking about collecting animals and building a large wooden boat.  Just a few hours into the first day of the first annual Overland Expo East, the skies released a deluge of water that sent everyone running for the closest awning or canopy.  The rain came down so hard and so fast that it was truly comical. 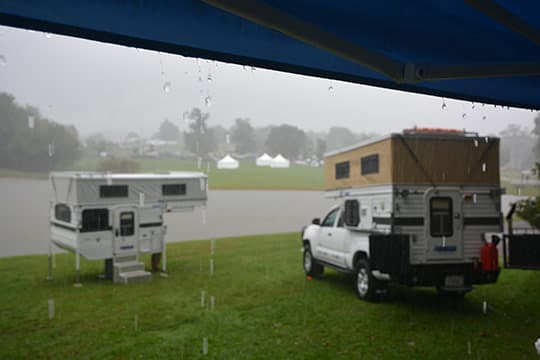 Above: At the height of the storm, we were under a canopy at the Four Wheel Camper display

Following the rain storm, Angela and I returned to our camper, which was at the top of a hill overlooking the Expo.

What had been a dry dirt road was now a full-on mud bog, sending four-wheel drive vehicles of every description wheel-spinning and fishtailing in spectacular mud-flinging fashion.

The real show started when someone decided that their truck and travel trailer could take on what had thwarted a few dozen jacked-up Jeeps, legendary Land Rovers, and tricked-out Tacomas just moments earlier.  As the travel trailer rig rounded the corner at the foot of the hill, the cheers went up.  Without speaking a word, everyone was thinking the same thing, “This guy is nuts!”

Above: Proof that travel trailers cannot go anywhere. Note the flying mud in the center picture.  Click to enlarge.

Undaunted, he hit the accelerator, rushing straight into the thick mud soup.  The gathered crowd roared with raised camera phones as the rear wheels instantly painted the trailer a deep brown.  At first, the Ford F-250 made the seemingly impossible climb, impressively passing the spots where many others had failed.

Then, despite what can only be called a terrific effort, the truck and trailer ground to a halt, sinking into terra non-firma.  The only thing moving were wheels and mud.

“He’s done,” said the guy standing next to me.

“Time for a winch out,” said his friend.

Well, if there was one place on planet Earth to get stuck in the mud and need a winch rescue, this was certainly the place.

Like kids running down stairs on Christmas morning, the crew from RawHyde Adventures rushed into action with their Warn winch-equipped Ford F-250.  I don’t think they could have been more excited if they just won the lottery, twice, on their birthdays.  An actual winch-out situation, with an audience, at the Overland Expo?  There isn’t a bow big enough for this gift.

Above: RawHyde adventures winches out the travel trailer. Click to enlarge.

The better-equipped RawHyde truck made to the top of the hill with ease, turned around, and dug in about fifty feet from the stuck Super Duty.  The RawHyde team then walked the winch lead down to the tow hooks. 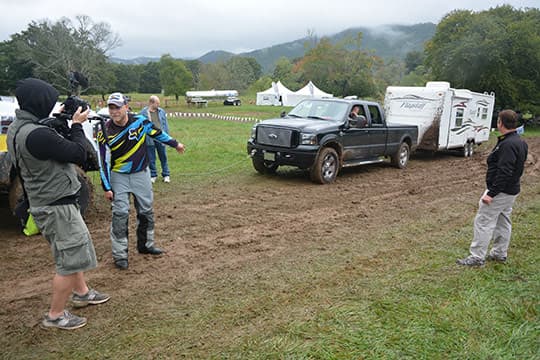 Above: As the action unfolded, the play-by-play was called out on camera with a level of TV-ready reality drama only Mark Burnett could dream of.

Now what was it were were reporting on?  Oh yeah!  The Overland Expo East.

Following what has to be the wettest and wildest beginning in Overland Expo history, things got back on track.  The storm had passed, the Overland Expo team closed-off the mud-run, and the sun returned to begin the drying-out.

Emerging from our camper with dry clothing and a renewed spirit, Angela and I made our way down to Brian Towell’s seminar on “How to Choose the Right Truck and Camper Combination”.  Can you imagine hosting a seminar on this subject – of all subjects – and having us show up in the audience?  Brian might as well hosted a “Pretty Puff Pastry” presentation and had the Pillsbury Dough Boy and the Pepperidge Farm Team walk in.  Of course Brian did an excellent job, mirroring our own safety-first sentiments on this important subject.

A young twenty-something couple was in attendance at Brian’s seminar looking to assemble a truck and camper for a South America surfing adventure.  Brian steered them right for their south of the border expedition, explaining the concepts of assembling a rig that’s within payload from the get go.  In turn, we urged them to reach out to those who had already blazed a trail south of the border, and referred them to our popular Off-Road Adventures section.

Immediately following Brian’s seminar, Angela and I did something we had never done before; co-hosted a round table.  The subject was wide-open; anything and everything on truck campers.  Tom Hanagan, President of Four Wheel Campers, led the round table and the three of us took on questions ranging from “Are dual rear wheels really necessary?” to, “Which is better; pop-up or hard side?”.

The three of us gave the best advice we have.  Honesty, I was a bit nervous to be on stage like that, but it was probably my most gratifying experience from the Expo. 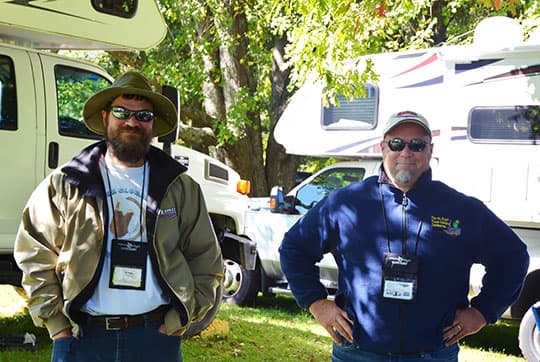 Above: William Hill (right) from Lance Camper brought a 2015 Lance 1052 double-side and camped next to Brian Towell (left) and his flatbed Lance 1191 Kodiak monster mobile

Above: The two Lances camped together were truly “Beauty and the Beast”.  We’ll let you decide which camper is which. 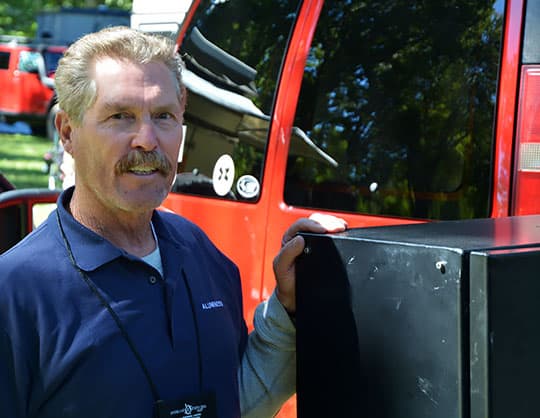 Above: Dave Hoskins, President of Aluminess Products, camped at the Expo in his red Sportsmobile tricked out with Aluminess aluminum bumpers, racks, and boxes

Above: Click to englarge.  We saw literally dozens of Aluminess front and rear aluminum bumpers on display at Overland Expo East.  When we talked to folks about their Aluminess front bumpers, they explained that the Aluminess bumper systems added the function of a bull bar, winch mount, and light mount to their rig – without adding too much weight like steel bumper systems can do.

It was the kind cold wind that gets folks thinking about finding the nearest cave and curling up with Smokey for a quick five-month nap.  We’re talking about a fiercely competitive “Rock-Paper-Scissors” game under the covers to see which of us had to get out of bed and turn the propane heater on cold.  We’re talking serious long underpants and a real winter jacket cold.

Not ones to shrink from our responsibilities, Angela and I decided to sit in our warm truck camper, with our hot coffee and plaid flannel Costco comfy pants, and watch everyone else freeze their proverbial butts off outside.  We’re rough and tumble like that.

By about 10:30am, the sun had burned off the worst of the cold and we emerged, layered head to toe, to brave the elements.  Before venturing into the Expo, we explored the campground area and introduced ourselves to the dozen or two truck campers nearby.  Then we headed to another seminar by Brian Towell, “Matching a Camper to a Flatbed or Utility Body”. 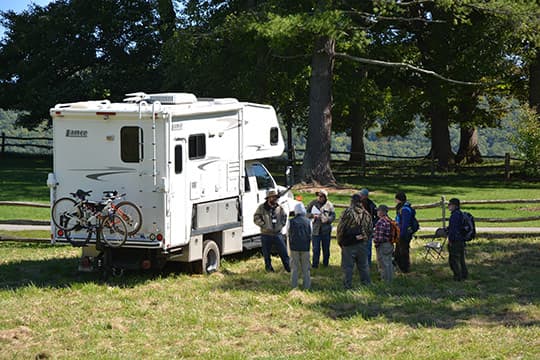 The rest of the day was spent photographing interesting things at the Expo, meeting readers, and trying to stay warm.  Eventually the damp cold air blowing off the pond got the best of us and we scurried back to our heated camper.  Angela took the opportunity to fire up our camper oven and bake an apple cake.  It was a warm and sweet end to an otherwise bitter cold day. 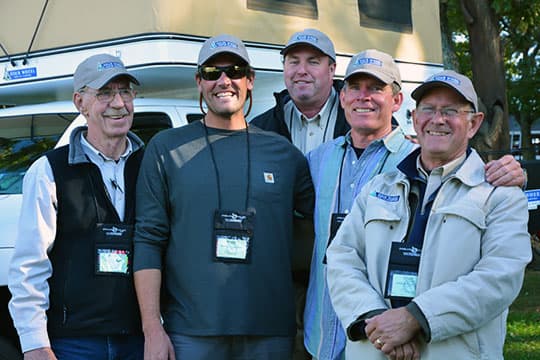 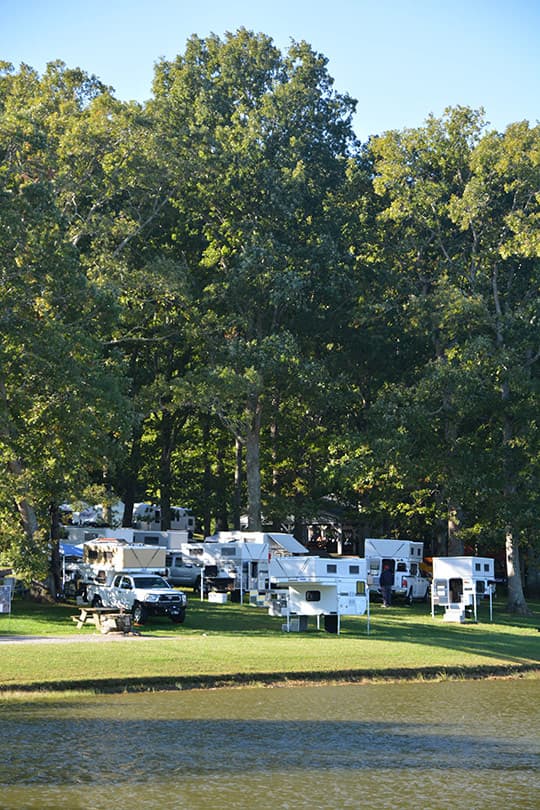 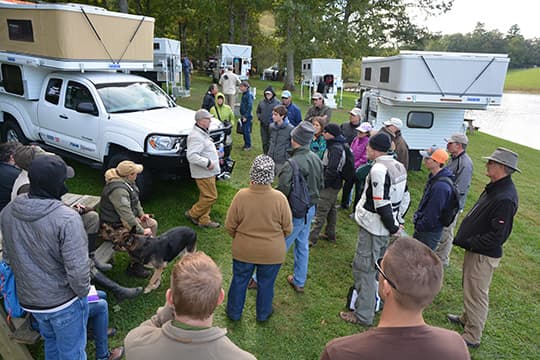 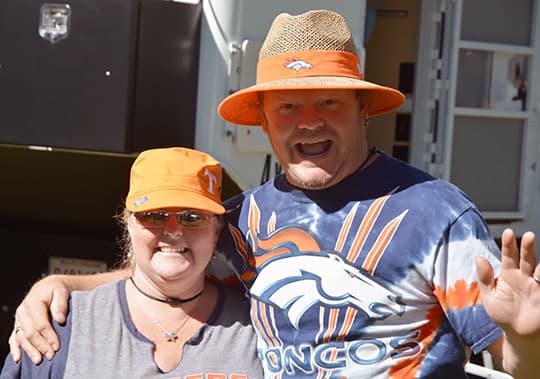 Above: Cari and Robby Rowe, Owners of Phoenix Custom Campers, showed up ready to support their favorite football team.  I think they like the Broncos.

Above: Phoenix Custom Campers invited their customer, Jeff, to bring his pop-up sofa slide.  Jeff’s camper was featured in the ariticle, “Phoenix Flatbed Pops-Up and Slides-Out“.  This was our first time seeing this incredibly unique rig and we wasted no time photographing it nose cone to back bumper.

Pre-dawn on Sunday morning we made a classic truck camping rookie mistake; we ran out of propane.  The evidence was unmistakable.  We woke up in the middle of the night to a nearly frozen truck camper.  In this case, the temperatures were in the low 40s inside, and low 30s outside.

Our propane regulator on our new-to-us has been acting up – something we will soon address – and will not properly switch to one side.  Until we replace the regulator, we actually need to switch the propane tanks and reattach the hoses accordingly.  Welcome to life with a not-brand-new truck camper, right?  We’re living in the real world now.

Anyway, there I am, again in my plaid flannel Costco comfy pants, switching propane in thirty degree weather.  I must have been quite the site as the nearby tent campers kept looking at me, and then quickly averting their eyes.  If Angela hadn’t brought my blue snow-dork hat and gloves, I may have frozen my journalistic credentials off somewhere on that sloping North Carolina field.

A few minutes later I returned to the camper where Angela cracked open a vent and window, ignited the propane stove to air out the propane lines, re-started the refrigerator, and cranked the heat.  Naturally, I was her hero, and reinstated to my usual, “Husband of the Year” status.

Above: Angela and I really enjoyed seeing all the truck campers in the camping area, meeting their owners, and learning about their truck camping lifestyles

Thankfully, Sunday’s weather was glorious.  We’re talking the kind of late Summer, early Fall day that makes you want to stand outside all day talking to friends.  And that’s pretty much what we did all day Sunday.  We talked to the truck camper manufacturers, met lots of readers, and made new truck camper friends from one end of the Expo to the other.  It doesn’t get any better.

The official Overland Expo East festivities concluded with a fantastic barbecue dinner.  We sat at a table with both industry and reader friends, and loved every minute of it.  Not unlike the Sunday farewell breakfasts at the rallies, it’s one more opportunity to be with friends you don’t see but maybe once a year.  If this year has taught us anything, it’s that we need to savor these moments.  They don’t always come around again.

Despite the biblical rain storm, bone chilling cold, we really enjoyed the Overland Expo East.  Although turn-out was not as strong as Overland Expo West, it was more than enough to prove the East Coast wants the Expo.  Given time, I have no doubt Overland Expo East will be every bit as popular as its Western counter-part.

We also want to thank Roseann and Jonathan Hanson for what must be recognized as an incredible job well done.  We would also extend our gratitude to the Overland Expo volunteers, instructors, and presenters.  Weather events aside, Overland Expo East was a big hit and it couldn’t happen with out the focus, efforts, and sheer tenacity of the Hansons and their team. 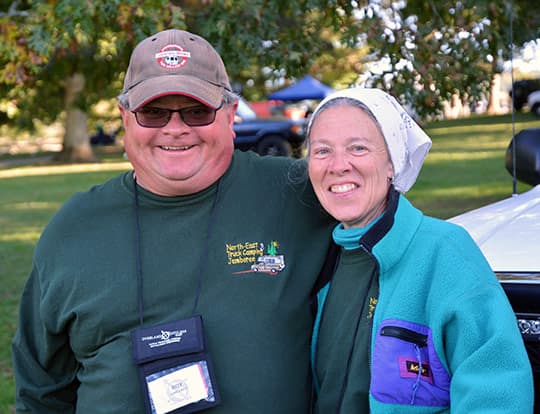 And lastly, a big personal thanks to Roy and Terry Garland who not only scoped out the campground for us ahead of time, but made sure we got a good spot.  You guys rock!

Above: We explored the many varieties of vehicles on display.