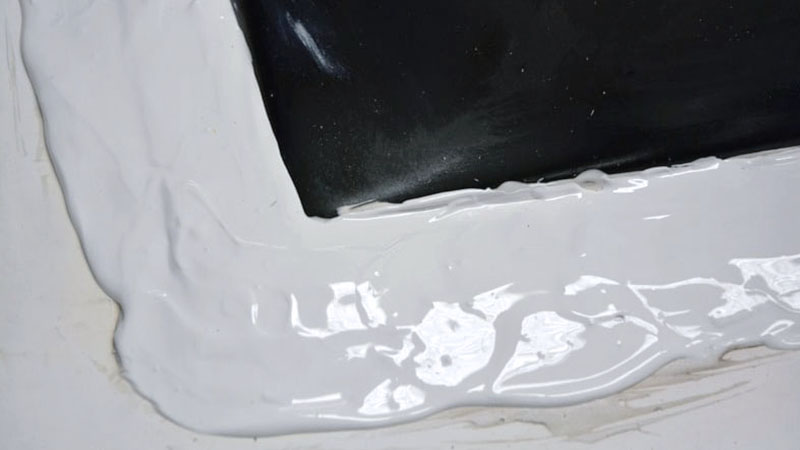 Long before we took ownership of our used truck camper, we were making plans to check and fix the roof and side seals.  We have seen one too many RVs at repair shops with extensive damage from a water leak.  If there was anything we could do, we were not going to let that happen to our camper.

The following article is meant partially as a follow-up and further detail to our 2010 article, Maintaining Camper Seals.  We recommend reading both articles before proceeding with your own caulk and seal maintenance.

With the decals removed, and the filon de-oxidized, the next step was to caulk and seal our camper.  Having been to all the factories, we knew we wanted to use Sikaflex 715 for our TPO rubber roof, and Sikaflex 521 (we have also used Sikaflex 505 – ordered from Amazon and that works well) for the exterior filon.

Sikaflex was first brought to our attention by Bob Mehrer of Snowriver in 2007.  Bob had tested various sealants and had concluded that Sikaflex was the best.  In 2010, Mony Penn of Eagle Cap had also tested Sikaflex and was using it exclusively on Eagle Cap campers for the same reason.  Other industry veterans over the years had told us much the same; Sikaflex was expensive, but worth it.

TIP: In our, “Maintaining Camper Seals” article, Mike Kernagis, Service Manager for Palomino RV, recommended Dicor self-leveling sealant for TPO rubber roofs, and Geocel MHRV for exterior filon.  Dicor and Geocel are what most RV manufacturers use at their factories and are less expensive alternatives to Sikaflex.

Over the years, we have observed dozens of people caulking and sealing truck camper roofs and side walls but had never actually done it ourselves.  For expert advice on how to properly caulk and seal our truck camper, we went to Bill Ward, President of Hallmark RV.

Our original plan was to remove all of the existing sealant and replace it with new Sikaflex 715 and 521 sealant.  Bill suggested another approach.  From experience, he advised not removing the original seals unless they were damaged or compromised.

Bill said, “Why mess with a good seal?  You could end up doing more damage than good.  If some of the seals are in good shape, leave them alone.”

We had envisioned a completely re-caulked and sealed camper, but the real goal was to prevent water intrusion, not to seal for sealant’s sake.  Besides, not everyone has the time or inclination to remove all of the seals and reseal and entire truck camper.  After our experience, removing all of the seals and resealing the whole camper would take an individual several days.

We took Bill’s advice, and only fixed what was actually broken.

We started by unloading our camper so we could access, inspect, and seal every part of the camper, including the front wall and underside.  We also didn’t want to get any sealant on our truck.

Once demounted, Bill handed us gloves and a small container of acetone.  The acetone, as Bill explained, would clean the existing seals so we could see the condition of the seals and determine which seals needed repair.

Acetone is a colorless solvent commonly used to remove nail polish, and as a paint thinner.  The RV industry uses acetone extensively for cleaning and removing dirt and sealants before applying fresh sealants. 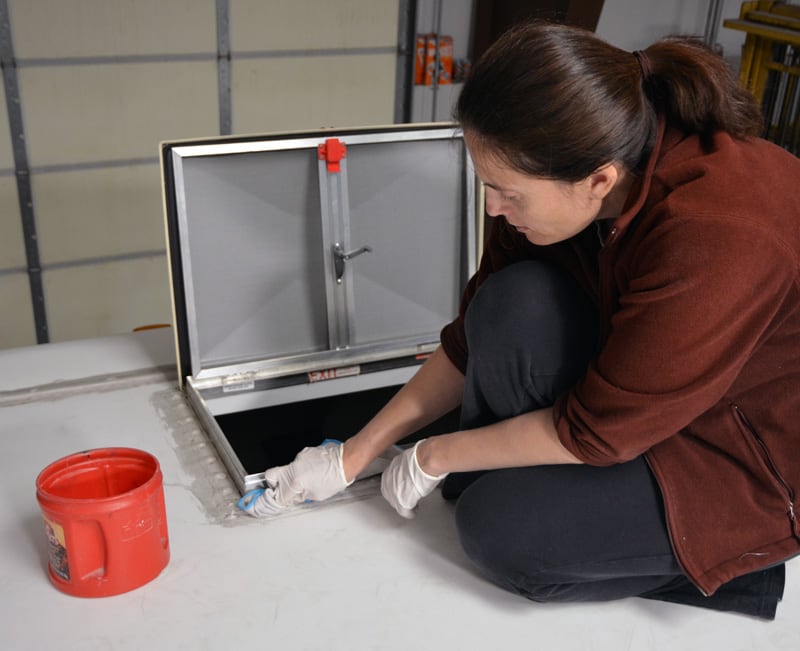 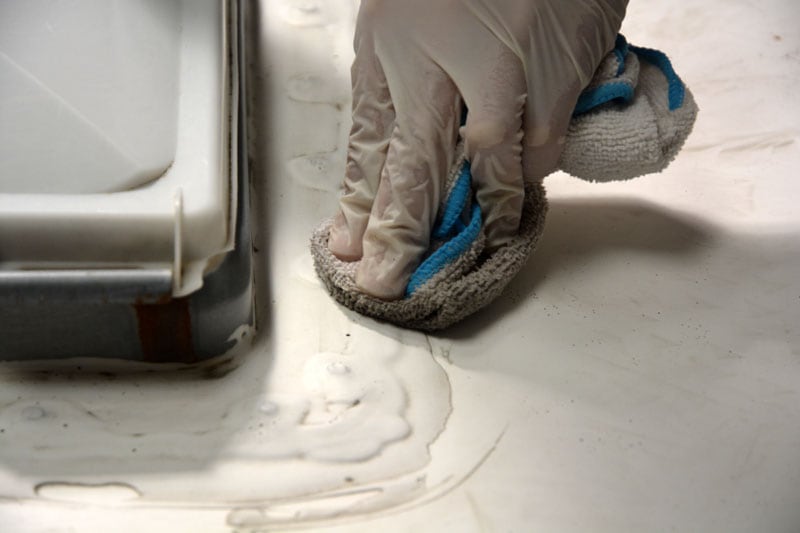 The acetone made fairly quick work of cleaning the seals turning them from a dirty grey-white to a clean off-white.  The acetone seal cleaning also quickly revealed seal breaks and potential leaks.  Specifically, we were looking for cracks in the roof seals or any place where the sealant had come away from the roofing material. 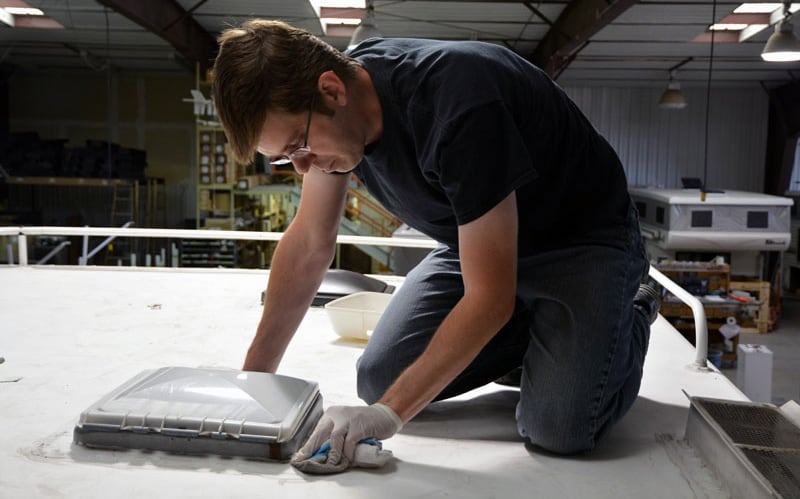 Here’s how Bill showed us to test roof sealant:

2. With your fingers, push on the sealant and check if there’s an air pocket underneath, or if it moves.  Good sealant will be tight to the camper with no air pockets and will not move.

TIP: Bill’s advice bears repeating; not that he’s a bear.  Do not remove good seals just to put new seals down.  Only caulk where the sealant is dry, cracked, or shows signs of wear and tear or deterioration.  If your seals are pliable and soft, attached firmly, and look good, leave them alone. 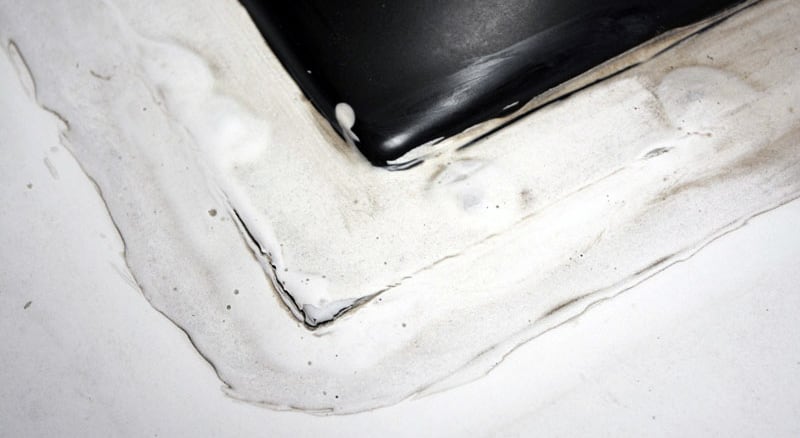 The edges of the bathroom skylight were an immediate point of concern.  The caulking around the skylight was damaged, especially on the edges.  The four corners of the skylight were literally popping out of the original self-leveling roof sealant. 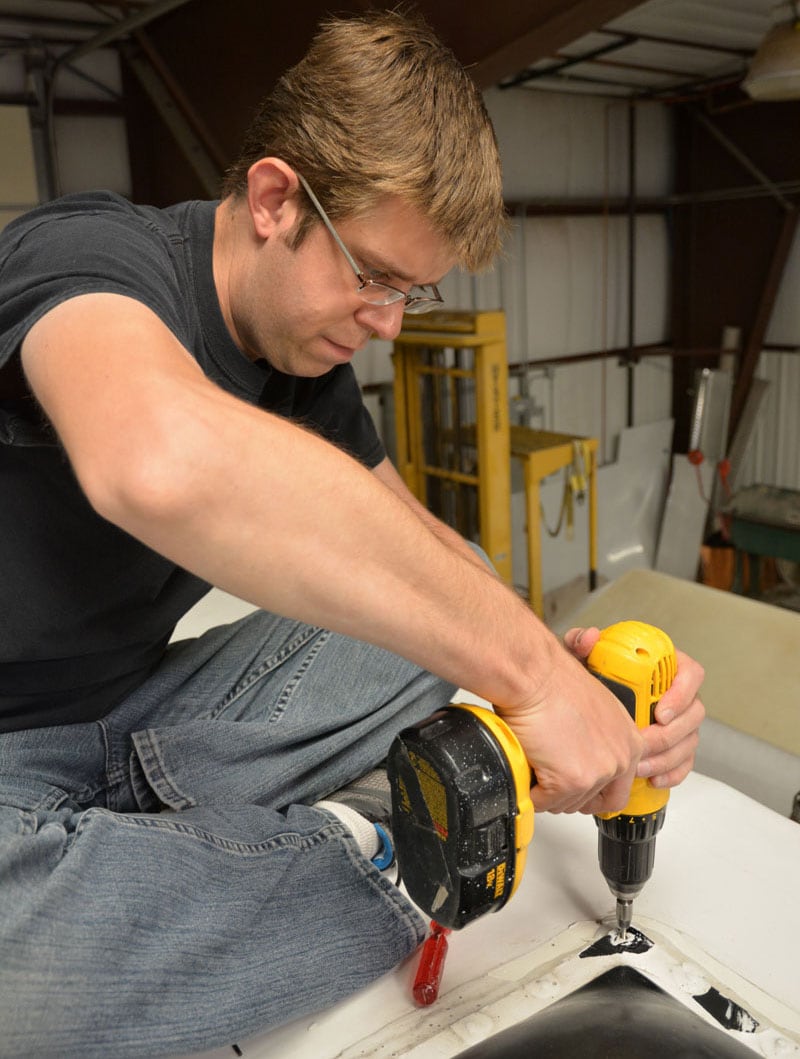 To fix the seal around the skylight, we peeled back the original caulking in the trouble areas.  With the sealant removed, we could see that the corners of the vent were not screwed down when the camper was originally manufactured. 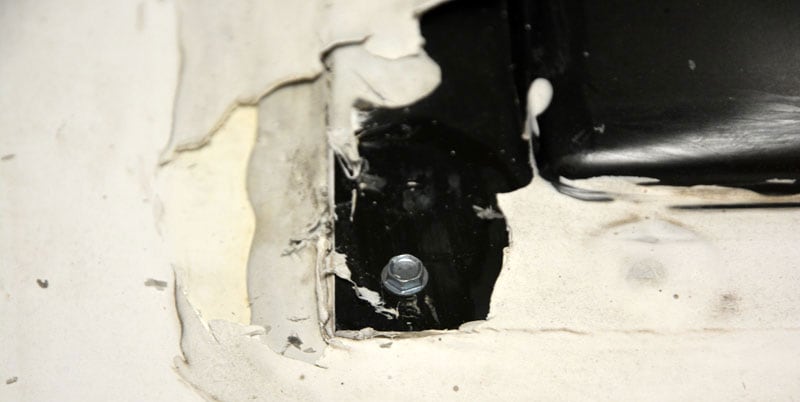 We added four stainless steel screws, one for each corner, to prevent the skylight edges from popping out again.  Bill told us to put a dab of Sikaflex 715 on the screw holes before applying the stainless screws.  This helps to better seal the screw holes from possible leaks. 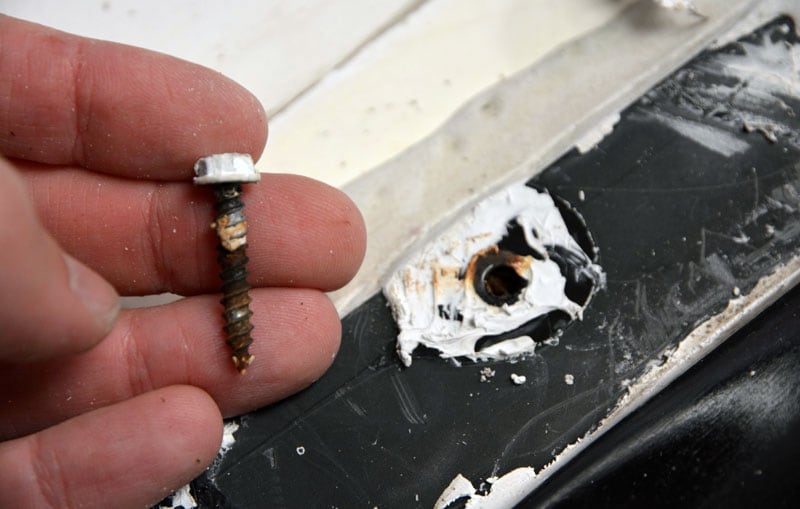 The roof’s edges revealed more possible seal trouble spots.  The caulking in this area came off readily and the original screws were quite rusty.  We removed these rusty screws and replaced them with stainless steel screws.  Again, we put a dab of Sikaflex 715 on the screw holes first.

Some of the original eleven year-old caulking was in good shape.  It’s possible that the previous owner re-sealed the camper sometime over the camper’s first decade, but nothing we saw pointed in that direction. 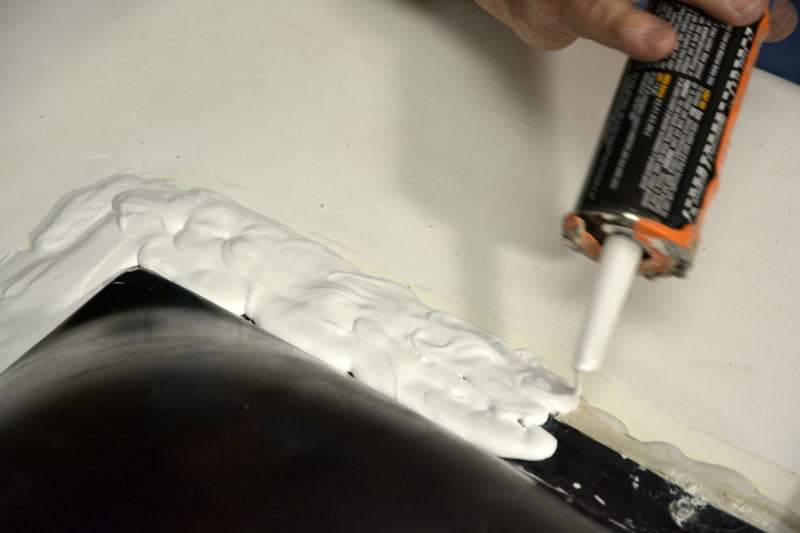 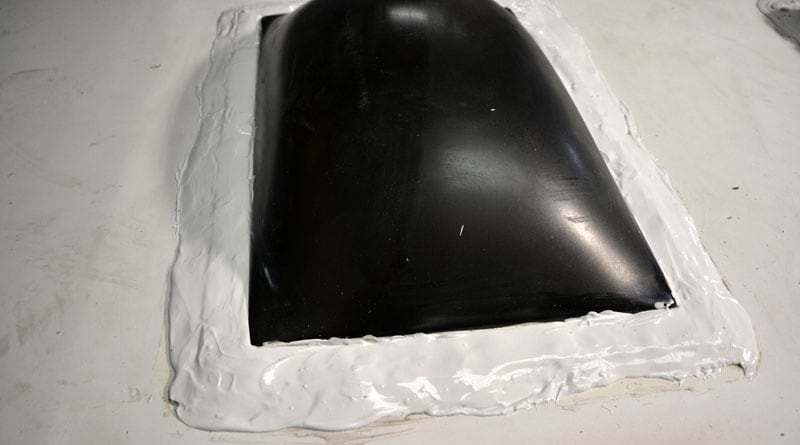 Once the screws were applied, the old loose caulking was removed, and the area cleaned with acetone, we re-caulked the skylight with Sikaflex 715. 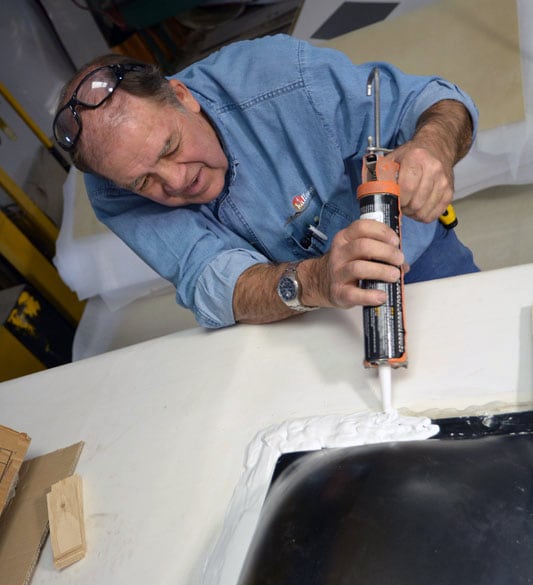 Above: Bill Ward helping with the caulking of the roof skylight 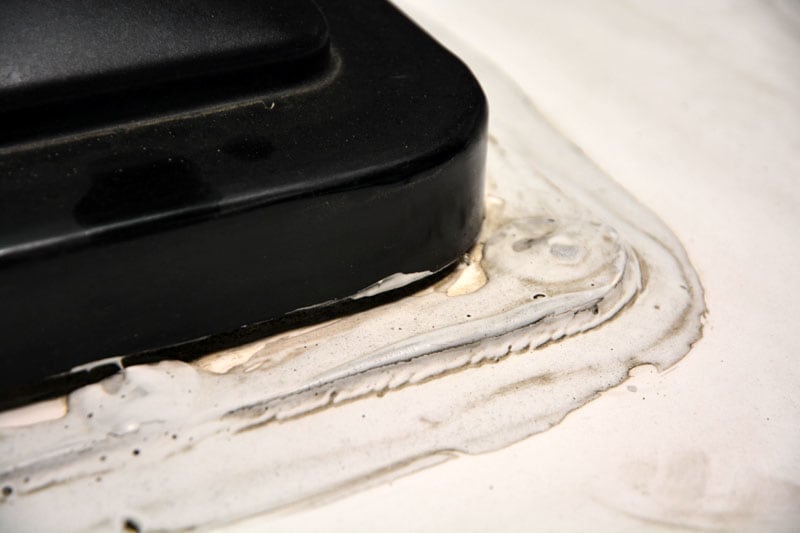 Above: The black skylight in the bathroom and the black Fantastic Vent were the biggest problem areas on the roof

The biggest problem areas of our roof were around the black vents, perhaps because the black color absorbs more heat. 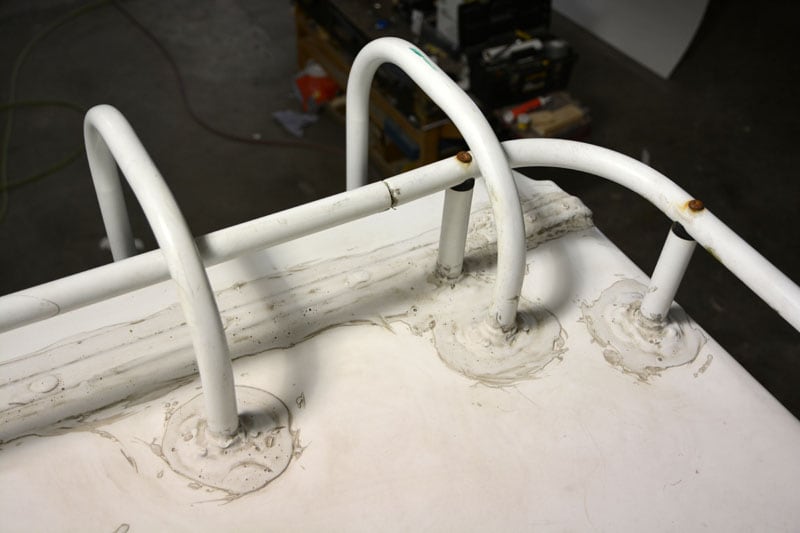 Above: Notice the rusty screws on the roof rack

To address this problem, we carefully re-caulked where the roof and ladder and rack meet, and put dabs of Sikaflex on the screws.

TIP: Sikaflex 715 has a consistency similar to toothpaste.  Per Bill’s recommendation, we applied it evenly with a caulk gun, and then smoothed it out with our fingers.  It sounds messy, and it is, but it’s a straight forward material to work with.  Similar to the industry standard Dicor Lap Sealant, Sikaflex 715 is self-leveling.

Inspecting and Repairing Side Seals 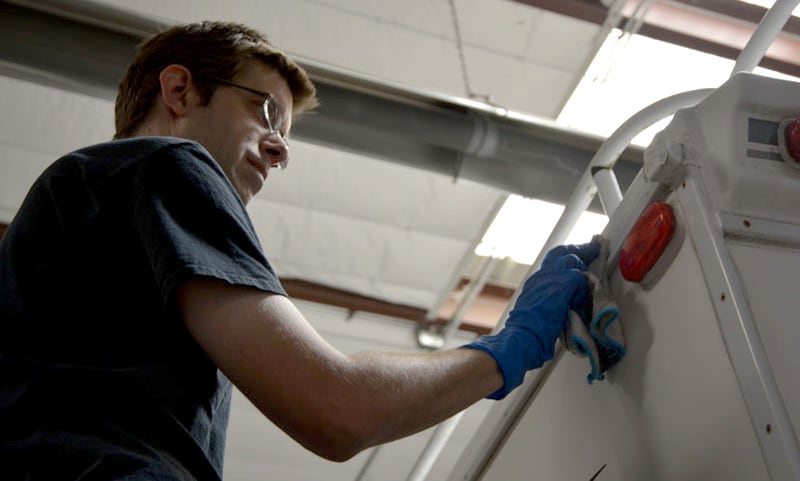 With the roof completed, we turned our focus to the seals on the side walls.  Once again, we used acetone to clean the seals.  This time, the seals went from a grey-black to an almost bright white.  The difference wasn’t subtle.

TIP: Bill warned us that acetone is great for cleaning seals, but it can also take the finish off anything metal, including RV window frames and compartment door surrounds.  To illustrate the point, he took us over to an old camper and rubbed the metal clean with acetone.  If at all possible, avoid rubbing acetone on anything metal. 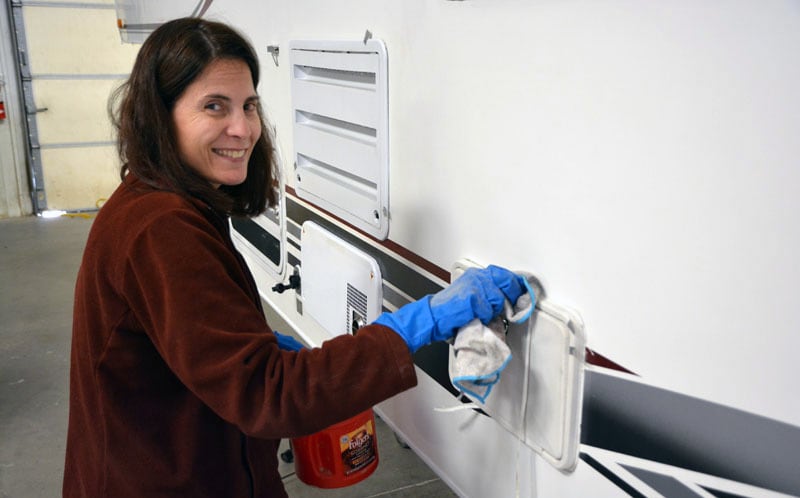 It took both of us about a half-day to clean all of the seals.  No, we’re not slackers.  There are just a lot of seals on most truck campers; around windows, compartments, vents, and the perimeter seams.

Above: The right side of this seal has been cleaned white with acetone

Once the seals were clean, we visually inspected the seals on the sides, nose, rear, and underside of the camper.  Anywhere we spotted a problem we marked with a piece of tape. 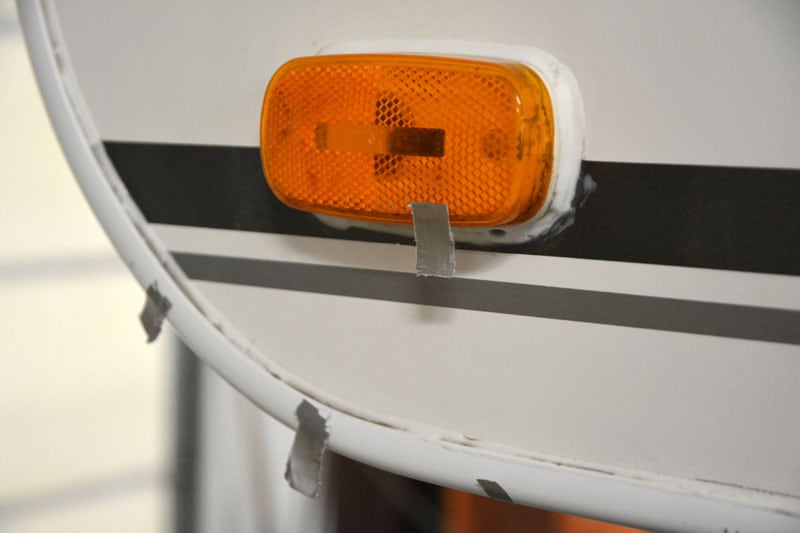 This is a trick we learned from Northwood.  When Northwood quality controls a truck camper, the inspection team marks anything of concern with a small piece of red tape.  Northwood calls this “squawking” a camper, and calls the tape itself, “squawk”.

If we found a seal that appeared broken, or presented a gap, we squawked it with a small piece of tape. 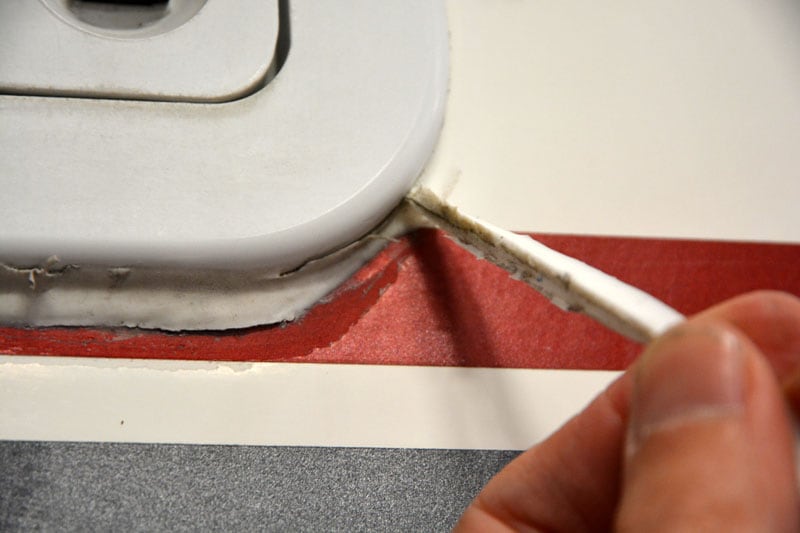 Above: The refrigerator vent’s caulking peeled right off

This process helped us to not miss anything when we went back to repair the seals.  We also discovered that many of the areas of concern were near items that protruded from the camper, such as the refrigerator vent and exterior shower.  Anything with a lip on it often needed to be re-caulked. 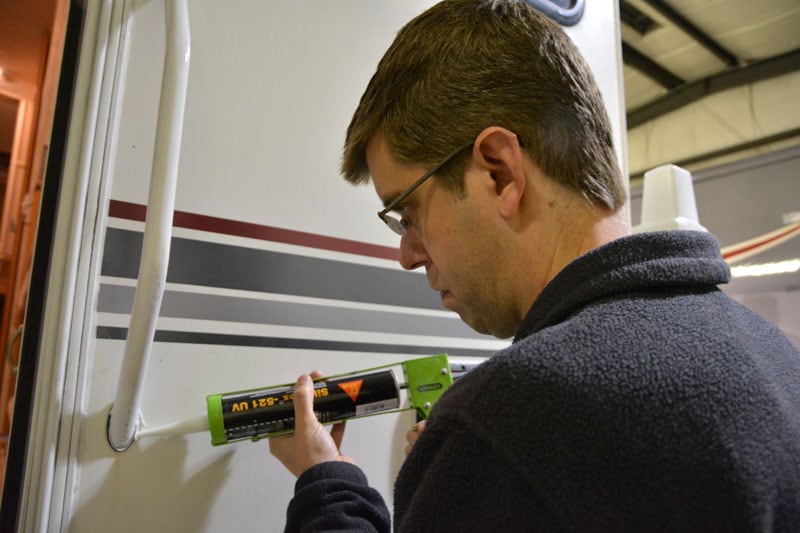 To repair a broken or damaged seal, we first carefully removed the old sealant.  To do this, we would pry the sealant to get it started, and then pull the bad sealant right off.  To our surprise it came off very easily.

Above: Sikaflex 521 has a consistency similar to toothpaste.  We applied it evenly with a caulk gun, and then smoothed it out with our fingers.

SealTech machines are designed to pressurize the interior of your camper when all of the vents, fans, windows, and doors are shut.  Once pressurized, the camper exterior is sprayed with soapy water.  Wherever bubbles form is where there is a potential or existing leak on the truck camper.  Once identified, these leak sources can be sealed.

When we found out that Parkview RV in Smyrna, Delaware had a SealTech machine, we made an appointment for our freshly caulked and sealed camper. 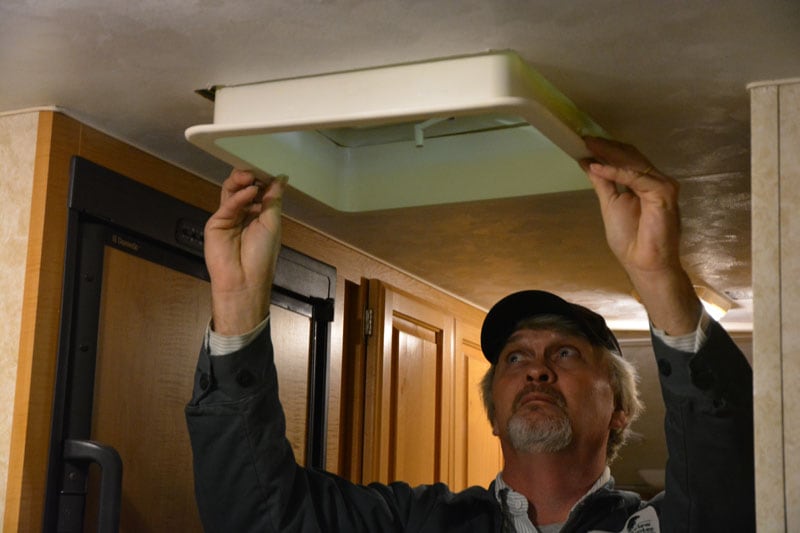 If we had done our job right, we would find little to no seal breaks with the SealTech machine.  There was only one way to find out. 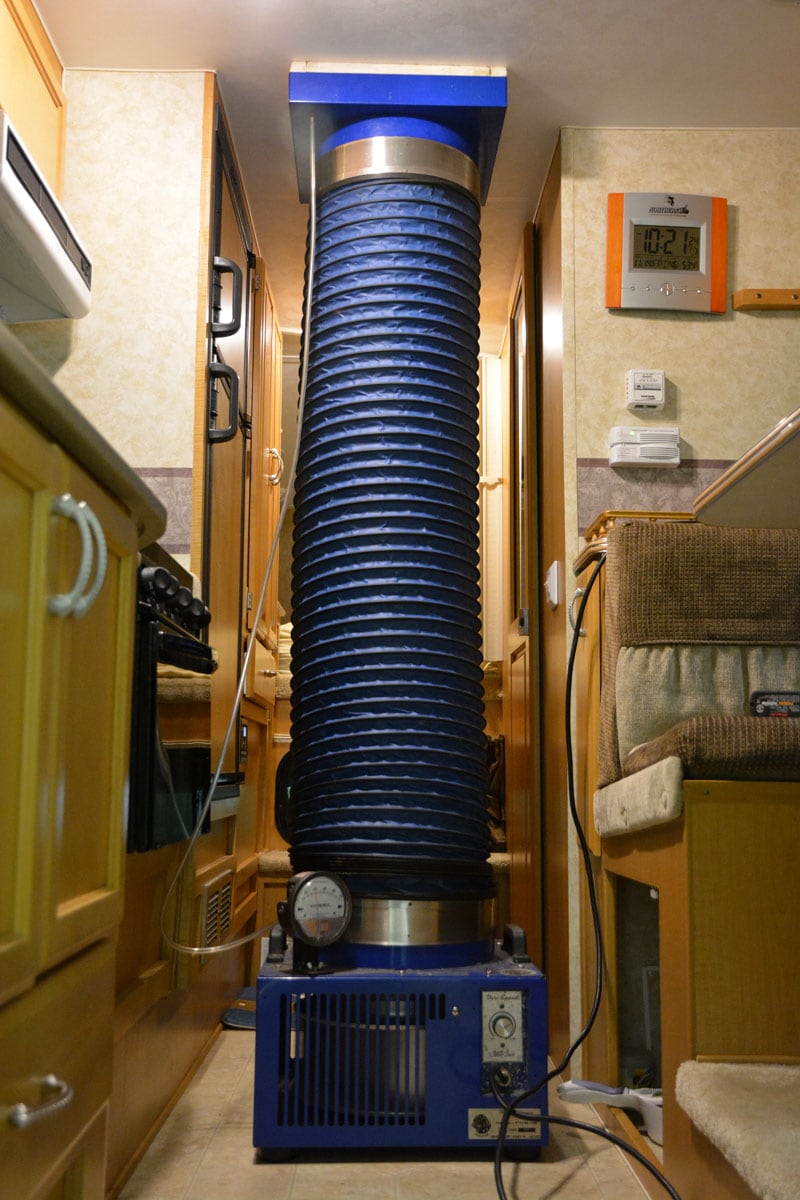 To begin the test, David Kemp set up the SealTech machine in the center of our camper, connected it to a top vent, made sure all vents and windows were closed, turned on the machine, and shut the rear door. 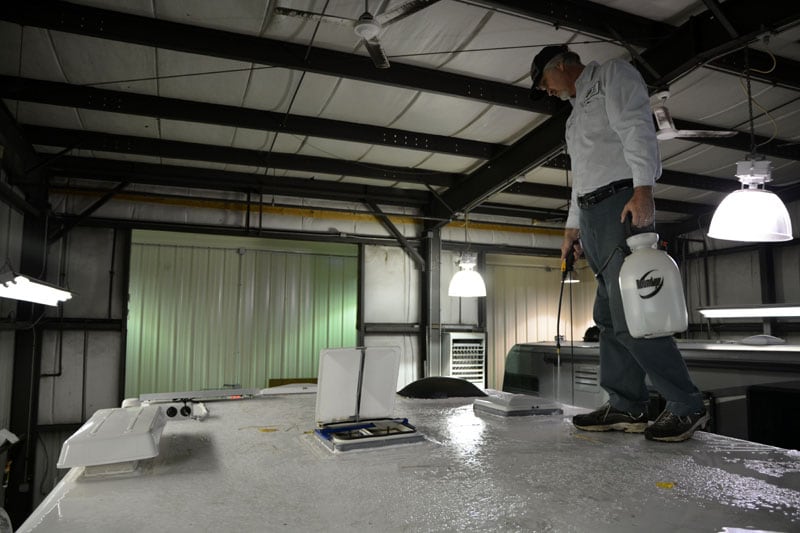 Then David sprayed soapy water on the seals and known trouble points, starting with the roof.  To our delight, there wasn’t a single problem point on the roof; no bubbles.  Evidently we had done an excellent job and there were no cracks or breaks in the roof seals. 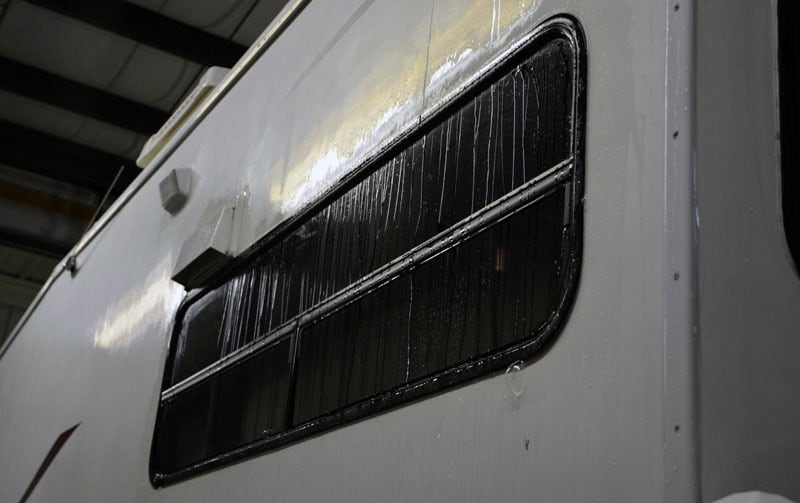 When we went around the rear, sides, and front, our perfect record didn’t last.  There were a few problem areas, mostly around the rear tail lights, and a passenger’s side seam that needed to be resealed. 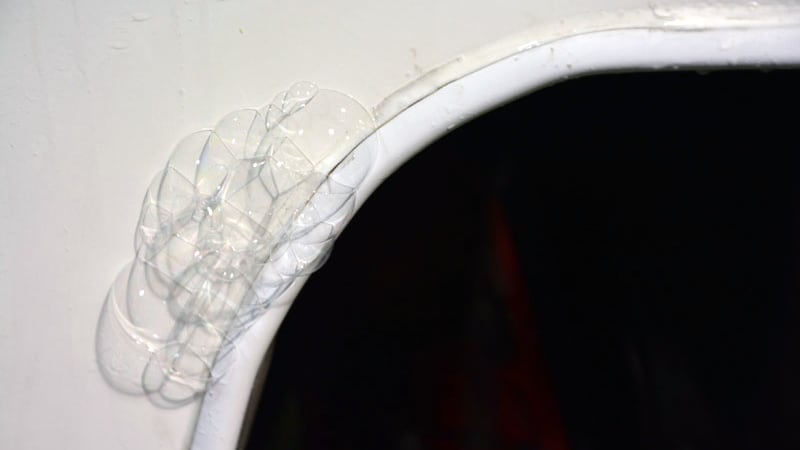 After the SealTech test, and our subsequent seal repairs, we were confident that our camper had been properly and effectively sealed.

TIP: SealTech machines can sometimes push open a seal that isn’t very strong.  We found out later that the SealTech machine had likely blown out one of the seals around our front clearance lights, and needed to be resealed.

Now that we are comfortable with checking seals, caulking, and sealing, this process is now a routine event for us.  At least once a month we’re on the roof looking for cracks or other signs of trouble.  We have a caulk gun and tubes of Sikaflex 715 and 521 with us at all times.  We also regularly walk around our rig and inspect the seals.

It is really important to continuously look for signs of water intrusion.  It is something that should not be ignored and needs to be monitored on a consistent basis.

Please read Tips For Buying A Used Camper before you purchase a pre-owned unit.

Home » Systems and Maintenance » How To Inspect and Repair Camper Seals

How to Start Overlanding