Charly Schirra shares his experience exploring Germany and Poland in his Four Wheel Camper Wildcat.  Pull in the truck mirrors.  These streets are tight.

Someone needs to start a cruise ship company that would store RVs on the ship, especially truck campers, and cruise in style back and forth to Europe.  Passengers could stay in their campers or in cruise ship cabins.  It would be an ocean crossing party every time with good people, great food, and more great food.

Imagine something like the Alaskan Marine Highway, only for a trip across the Atlantic and with cruise ship style amenities.  Heck, why not have ships crossing the Pacific and to Australia and Africa while we’re at it.  Sign us up, we’re ready to go.

While we wait for this daydream to come true, truck camping in Europe is still on the menu.  Probably the easiest solution is to rent a truck camper in Europe.  Another perhaps more economical solution is to contact someone who already owns a truck camper rig in Europe and suggest an exchange.  They could fly here and use your camper and you would fly to Europe and use theirs.  People do this with their homes all the time.  We’ve talked about this at Truck Camper Magazine many times, but have yet to take the plunge.

Charly Schirra’s story certainly makes the idea of truck camping in Europe even more tempting.  From his home in Germany, Charly explores his native country and Poland with his Four Wheel Camper Wildcat (a Fleet model domestically).  He was accompanied by his friend Heinrich who rented a Four Wheel Camper for the trip. 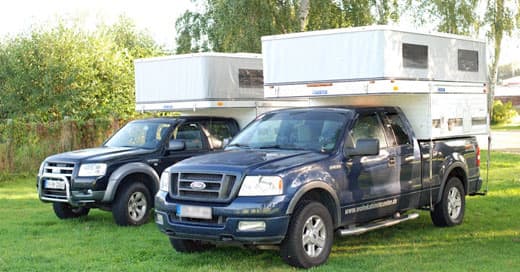 Above: Campsite in Mönkebude am Stettiner Haff; very nice and quiet located on the water

TCM: Tell us how you got into truck camping.

Charly: I have been camping for about four decades.  I started with some tents and later went fishing with a travel trailer.  At the beginning of my camping career, truck campers were not known here in Germany.

Since I bought my Four Wheel pop-up, I’ve been able to reach many new places that I could not reach before.  This was the main reason I got a Four Wheel Camper.  Now I can reach almost all the places I want to go.  I have tested bigger campers, but my choice is still the Four Wheel Camper.

TCM: Did you have to modify your Four Wheel Camper for Europe?

Charly: In Germany, the Four Wheel Camper buyers are supported by a strong dealer who cares about all the necessary changes.  I received my camper from them ready to go and didn’t have to make any modifications myself.

Above: In Kolberg where they got food and supplies

TCM: Truck camping in Europe sounds amazing.  Where do you live?

Charly: I am living in the middle of western Germany, on the green border of the “Ruhr-Area”. I  really like to be on the road with my Four-Wheel Camper.  We are non-static campers, so we travel all the time from one location to the other.  We like to explore the country, and the Four Wheel Camper is ideal for us because it is so compact.  While we are camping, we have everything that a bigger camper could offer.

TCM: Has your truck camper been a good solution for visiting your family?

Charly: Oh, that’s a great point.  My daughter, her husband, and my three grandchildren live together in a small flat.  Since I have my truck camper, I can park nearby.  And if I would like to take a nap or need some calm, I could step into my camper, close the door, and I am home.

TCM: We like using our camper when visiting friends and family too.  Tell us about your last trip to Poland and along the Baltic coast.  Where did you go and what did you do during that trip?

Charly: Starting in Sczeczin, which was formally the German city of Stettin, we traveled along the coastline.  We enjoyed the old architecture and learned more about the history of this really old city.

From there we went to Kolobrzeg, which was formally the German city Kolberg.  There we visited the old lighthouse.  The lighthouse is near the beach promenade where tourists get fresh smoked fish, enjoy the port, and the view of the beach.

On the way to Gdansk, we stopped to see a military museum in Ustka, which was formally the German city Stolpmünde.  They display a lot of historic war machines like airplanes, tanks, and artillery.  While the men enjoyed the museum, the women enjoyed a good coffee.

Later we went to Gdansk, which was formally the German city Danzig.  Gdansk is loaded with history.  The city was founded at the end of the ninth or beginning of the tenth century.  Later the city belonged to the Hanseatic League.

TCM: What were some of your favorite places in Poland and along the Baltic coast that you would recommend to others?

Charly: The whole area is beautiful, and I think everyone who would like to travel here should start from Hamburg, Germany, and travel via Lübeck, Rostock, the Island Usedom, Swinouscie, Kolberg, Mielno, Darlowo, and Ustka to Gdansk.  The trip is not that long as Germany and Poland are not big countries.  From Hamburg to Gdansk you have only around 450 miles, but there is so much to see, and so much to explore, that you could easily fill three weeks with such a trip.

Editor: We invited Charly’s traveling friend Heinrich to contribute to this article as he accompanied Charly with another rented Four Wheel Camper.

Heinrich: We recommend the towns of Kohlberg and Danzig.  The east Baltic Sea coast of Poland has wonderful landscapes for holidays, especially with children.  The Poland coast is also much cheaper than Germany. 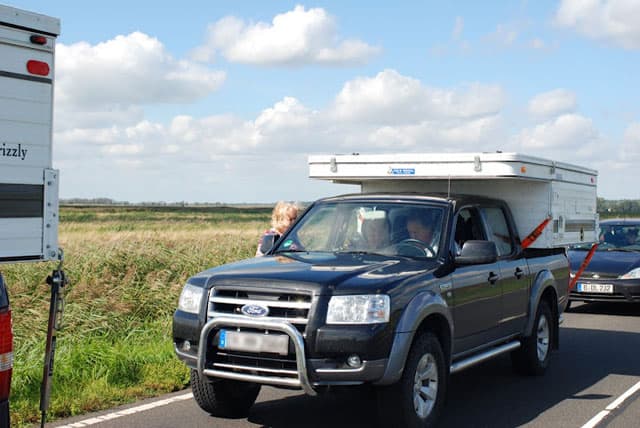 Above: It is slow on the island of Usedom, so a small chat shortens the waiting time

TCM: Sounds like a plan.  What challenges are there to truck camping in Europe?

Charly: I have found that there have been no challenges at all.  The truck can drive nearly everywhere I want to go.  We have many campgrounds here and in every bigger city there are places with water and power stations where people can stay a night or two.

Above: A short rest at the harbor, with historic ships

TCM: Did you caravan together for the entire trip?

Charly: Heike and Heinrich are friends of ours.  They do not own the camper, but they do have a truck.  The Four Wheel Camper dealer here helped us with the second camper, and we helped him with some nice pictures from our trip.  Since we are back, Heike and Heinrich are seriously interested in buying a Four Wheel Camper because they enjoyed the travel, and have been surprised at how easy their truck was to convert into a motorhome.

TCM: Where do you plan to travel next with your Four Wheel Camper?

Charly: We plan to travel all up to Scandinavia by way of Sweden and Norway.  South-France and Monaco is a destination, but we also want to go to the countries of Scotland and Ireland.

TCM: Heinrich; since you don’t own a camper, what are your camping plans in the future?

Heinrich: At the end of the summer, we want to go with Siggi and Charly to the Baltic Lands, Lettland, Litauen, and Estland.

TCM: Wow!  Can we come with you?  That sounds amazing.  Thank you for your story Charly and Heinrich.  Is there anything you would like to add?

I could go on for hours telling you about our trips, but planning our next trip is waiting.  Thank you for your interest!