For years we have extolled the virtues and convenience of exchangeable 20-pound propane tanks. After 645 reader responses, that is about to change.

This week’s Question of the Week was, “Do you refill your truck camper propane tanks, or exchange them?” We also polled the following propane question: 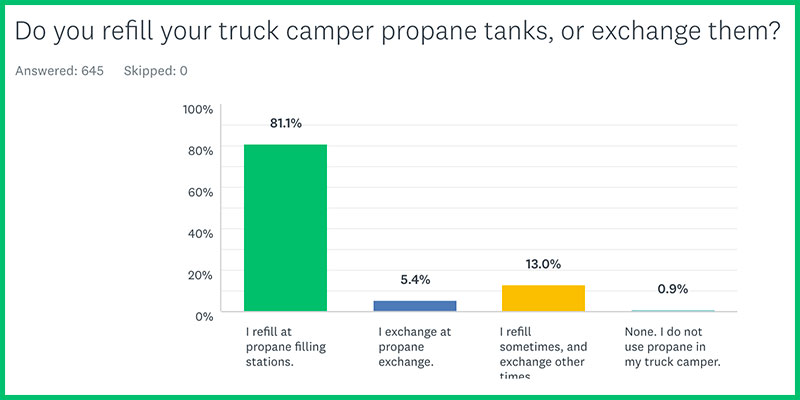 The above results have totally made me re-evaluate my recommendations for 20-pound vertical propane tanks. According to Truck Camper Magazine readers, 81.1-percent only refill their propane tanks. 13-percent refill or exchange, probably based on convenience. And only 5.4-percent strictly exchange.

Second, readers followed this survey question with some very good reasons about why they prefer refilling propane to exchanging tanks. These results mirror our own propane behaviors and beliefs.

Of those who do exchange, Walmart was the most popular place to exchange tanks with 11 recommendations followed by gas stations (6), Lowes (4), grocery stores (3), and Home Depot (2). Other named locations included local hardware stores, Sam’s Club, and Walgreens.

We read through the propane responses and pulled the comments that diverted from the above information, or offered unique perspectives and/or advice.

“I’ve been filling propane tanks for twenty plus years. I had my own 1,000 gallon pump station with a Neptune meter on it. It’s what comes of being among the first to convert your trucks to run on propane, before it was the green thing to do! It’s also what comes from operating a fleet of hot air balloons.

When I am without access to my own tank, it’s a gamble. Few propane dealers have a clue. Exchanges are most always a huge rip-off. In theory you get a nice clean safety checked tank. I look for whoever is having a sale or most reasonably priced.” – Matt Fen, 2006 Dodge, in between campers

“I understand your praise for truck camper manufacturers using 20-pound vertical tanks as you can get them exchanged, but I’ve had leaky valves on exchange tanks and have no idea how much propane is actually in the tank. It’s like going to the gas station to fill up and only getting three-quarters of a tank.” – Mark Joslin, 2006 Ram 3500, 2005 Lance 1181

“Propane exchanges might be convenient, but they are a rip off – especially if you exchange your new or recently tested tank for their used beat up tank. Our propane dealer only sells newly minted tanks. When our tanks reach their expiration date, I buy new ones. I also had a supplier tell me the exchange bottles are sometimes filled to only 65-percent capacity.” – Mark B., 2017 Ford F350, 2017 Hallmark Everest

“We only exchange tanks if that is our only option. It is important to check the exchange tanks to be sure they are in good condition. On the occasion when we get an older tank, we make a point to exchange it when it empties to replace it with a newer tank.” – Charles Maras, 2008 Ford F350, 2014 Lance 1191

“We have two 30-gallon tanks and fill them at many different places. Our tanks are mounted one behind the other and are high off the ground, so getting the back tank out, filled, and back in again is a process. When our front tank empties and is switched to our second tank, we start keeping an eye out for a place to fill the first tank. As soon as that front tank is filled we switch back to it.” – Audrey Ruccio, 2008 Ford F450, 2008 Host Everest

“While ice fishing, I liked coming back to the warm camper. However, on my first ice fishing trip in my new Arctic Fox 1150, I made the mistake of not checking propane levels and – at four in the morning – ran out of propane. A chilly lesson not to be repeated. Before each trip, and each morning in high usage nights, I check the status of each propane tank (two 30s) with a Truma propane sensor.” – Cliff Cizan, 2010 Dodge Ram 3500, 2013 Arctic Fox 1150

“With two tanks hooked up, I open one tank and keep one closed. I use spring type clothes pins to identify the tanks. One clothes pin says “use first” the other pin says “full” on one side and “empty” on the other. Then I know what tank to open when we leave. When it runs out, simply close one valve, open the other and change the pins.” – Larry Wiethop, 2007 Ford F250, 2002 Lance 920

“We’ll use any exchange outlet that has a good volume of traffic. Don’t use the outlet far out with low traffic, and we always check the expiration date.” – Lewis Turner, 2014 Ford F350, 2008 Northern Lite 9-6 SE

“I don’t exchange tanks. I don’t want somebody else’s almost expired tank in exchange for my new one! I may do it once my tank is almost expired though.” – Maaja Sutak, 2012 GMC 2500HD, 2017 Northstar Adventurer

“We travel with three tanks (one extra) because we never know when we’ll need it at 2:00am in the middle of freezing nowhere. We did have an issue once when the attendant couldn’t read the certification date and refused to fill that tank.

Because of the issue we had with the unreadable certification code, we always check the LP bottles and choose the ones with clear dates.” – Chuck and Jodie Ramsey, 2012 Chevy Silverado, 2014 Adventurer 116DS

Home » Question Of The Week » Propane Advice For Campers: Refill or Exchange