In 2011, Foster Huntington was working 70 hours a week in Manhattan, longing to be outside, surfing, and free.  Then he took the risk of a lifetime.

There’s a hysterical scene in one of my favorite ’80s films “Real Genius” where an over stressed college student, who has spent untold hours researching in the school library, gets out of his chair, freaks out, and runs frantically from the building.  His friends quietly glance at each other, and someone takes his seat.

Everyone knows the feeling of wanting to stop everything, freak out, and run away.  I’m not saying that’s a healthy reaction, nor am I condoning quitting one’s job in such fashion, but surely you understand the repressed desire to eject yourself from an overstressed situation, and set yourself free.

When I learned about Foster Huntington’s story, I pictured him working away the daylight hours in a windowless Manhattan cubicle, dreaming of the road, yearning for the West, desperately eager to dip his surfboard into saltwater and escape.  He probably had a few close calls where he too almost freaked out and hit the exit doors.

But then something wonderful happened, followed by more wonderful things.  Today, Foster’s escape story is legendary, as is his lifestyle.  Now it’s Foster who has thousands poised to snap and run from corporate cubicles everywhere.  Making the leap even more tempting, Foster recently released his second book, “Home Is Where You Park It”.

TCM: How did you decide to live full-time in a pop-up truck camper?

Foster: In August of 2011, I was living in New York and working as a concept designer at Ralph Lauren.  It was a cool job, but I was working seventy hours a week and never going outside.

I grew up in Portland, Oregon, and went to a small college in Maine. Up to that point, the outdoors were a big part of my life.  Working in Manhattan, inside a building, for seventy hours a week was a major shock to my system.  Eventually, I decided to quit my job and hit the road as a photographer and pursuing my own projects.

When I first got on the road, I lived in a 1987 VW Syncro.  The Syncro was built in the same factory as Unimog and featured full-time four-wheel drive, a locking differential, refrigerator, sink, and stove.  I made build-out cabinets for it.  Unfortunately, it was also twenty-seven years old, unreliable, and a drag to maintain.

During my travels in the Syncro, I spent time in Baja, Mexico, and other remote areas in the West.  I kept seeing more and more truck campers in these areas.  As the Syncro had issue after issue, I started researching a reliable truck and camper rig. 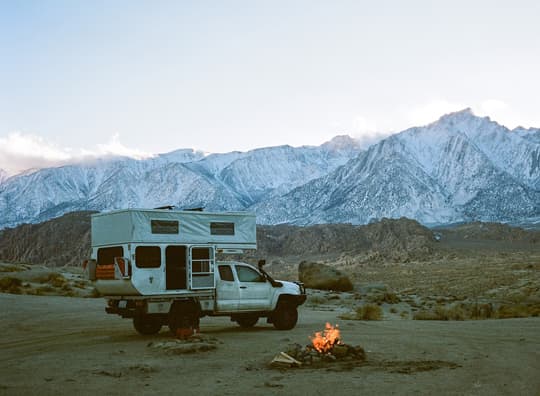 TCM: Why did you decide on a flatbed truck?

Foster: I bought a Toyota Tacoma flatbed truck because I wanted something relatively small with as much usable space as possible.  I went with a flatbed at the advice of Mario Donovan, Chief Designer for Adventure Trailers.  I had read about flatbed tray campers in Australia and they made sense. 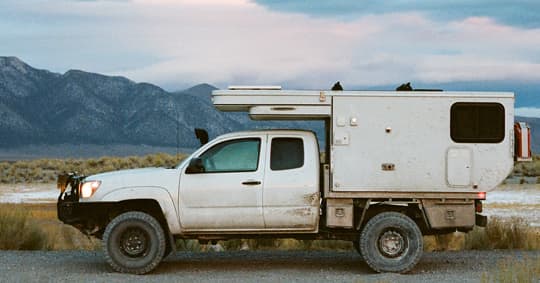 TCM: What led you to Four Wheel Campers? 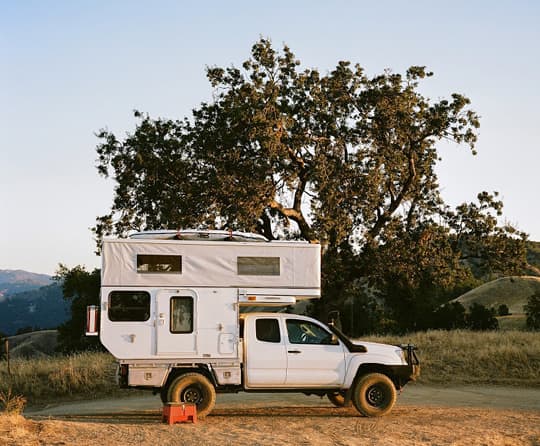 Above: Camping in Big Sur, California

TCM: So you bought it sight unseen?

Foster: Yes, I did.  Before picking up my rig, I had never seen the inside of a Four Wheel Camper in person.  I’m totally thrilled with my rig.  It’s great!  I’ve even had the opportunity to visit the Four Wheel Camper factory near Sacramento.  It’s a neat place and a cool company. 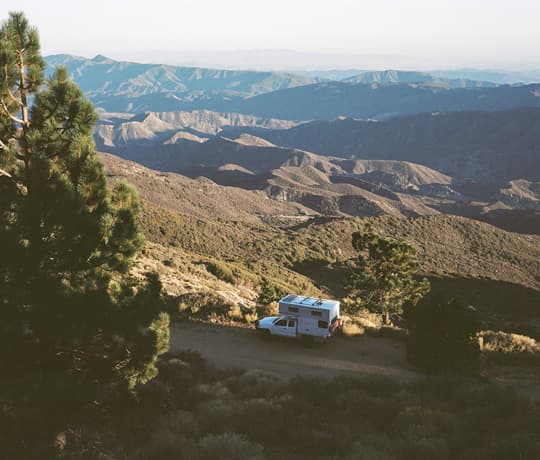 TCM: Just about everyone reading your interview is wondering how you are able to afford this lifestyle.

Foster: I did a photo book in 2011 through Harper Collins titled, “The Burning House”.  The advance from that book was more than I was making in a year for my day job.  That kept me going for a while.

I am focused on photography and consulting projects now.  I also work with brands and ad agencies.  That work gives me the freedom of location and pays for my lifestyle.

I originally thought I would travel until my book advance ran out and then get a day job.  That was the worst-case scenario.  The best-case scenario was to make money and continue traveling.

I was lucky.  People got in touch with me from ad agencies based on my previous projects.  I just finished my second book called, “Home Is Where You Park It”.  It’s a photo book with photos of campers and vans.  It was funded through Kickstarter, a crowdfunding website for creative projects.  I sold the book to Urban Outfitters.

I also worked for Patagonia for a year and a half while I was on the road.  While working on a project for Urban Outfitters, I met their creative director and head of online.  A year later he moved to Patagonia and brought me on board to help with social media.

At first, I didn’t know if I could change it up, but I did.  I’m willing to take risks.  That’s how I can afford my lifestyle and my truck and camper. 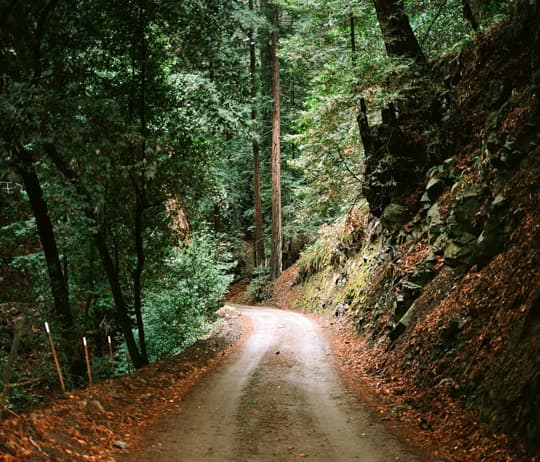 Above: A road in the Los Padres National Forest, California

TCM: Do you have any regrets now that you’ve started down this life path?

Foster: This has been been the most amazing time of my life.  Too often people buy big houses, get bored, and fill it up with stuff to have something to do. 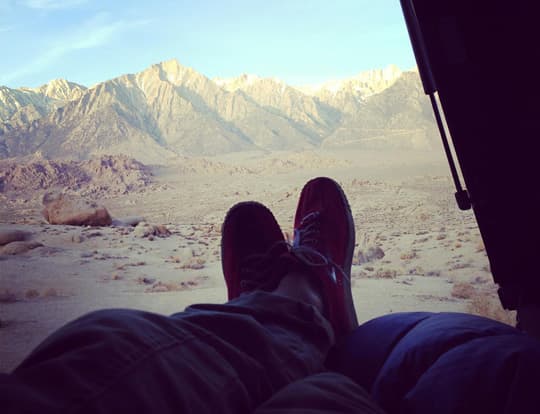 Above: Relaxing in Alabama Hills, California

Living in my truck camper, I just go somewhere new if I get bored.  That’s what I do instead of buying stuff.  I don’t think I could stay in one place.  That’s not what humans are meant to do. 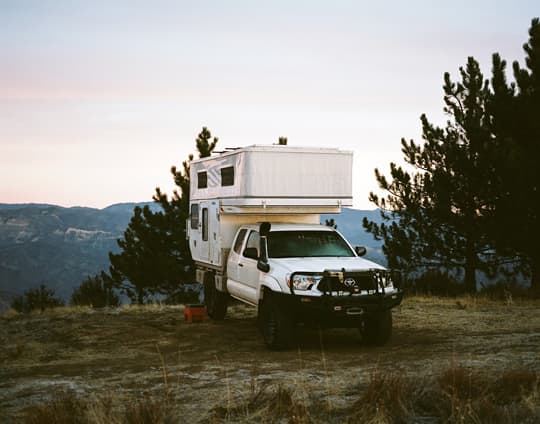 Above: Staying warm on a chilly winter night in central California

TCM: How do you handle things like postal mail, taxes, bills, and medical insurance?

Foster: I have my postal mail sent to my Dad’s house in Washington State.  Washington is where I grew up, so I’m there often.  I just swung through Washington to get my driver’s license renewed.  I’m in the northwest a quarter of the time.

If I want something sent to me on the road, I have it mailed to a friend’s house where I can pick it up.  I have a bunch of friends who do the South Dakota thing and have a mailbox there because mail forwarding is easy.

I get internet through my cell phone and spend a lot of time in coffee shops using their free wireless internet.

With taxes, I have an accountant and I keep track of everything.  Banking in this day in age is easy.  I get paid through direct deposit, so there are no worries about checks.

TCM: Do you have everything you own in your camper?

Foster: I have a couple of boxes in my Dad’s garage, and a hand full of stuff at my friend’s house in southern California, but everything else is with me in my rig.

It was pretty easy to purge, easier than I thought it would be.  I sold my stuff on Craigslist and eBay.  Purging was great!  Shopping is not an option when I’m in my camper.  I don’t have the space.  I have everything I need with me. 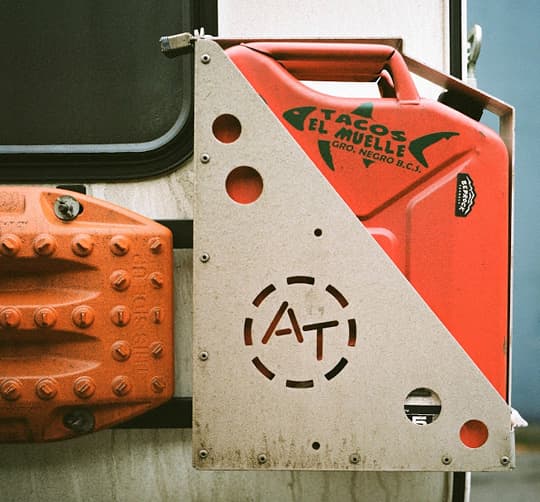 Above: Spare gas can holder and a sticker from Foster’s favorite tacos in the world

TCM: Have you made any modifications to your camper to make it work better for your full-time lifestyle?

Foster: Mainly I just added some storage stuff.  The boxes on the flatbed are huge and free up space inside the camper.  The flatbed boxes are great for my surf gear.

I strap my surfboards to the Yakima bars on the roof.  I lived in a van that just had a folding bed.  This camper is super fancy in comparison.  It has good use of space. 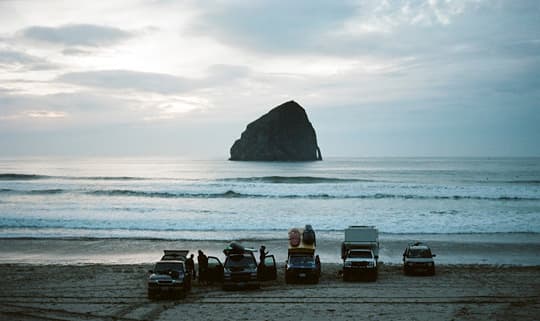 Above: Parked on the beach for a day of surfing on the Oregon coast

TCM: What do you do day-to-day?

Foster: I work every day of the week.  I go to bed early and get up early.  I work in the morning, and then I’ll go do something fun like surfing or snowboarding depending on my location.  It’s important to me that I stay active.

Then I’ll have an early lunch, work, have an early dinner, maybe change my campsite, and call it a night.  My work doesn’t really stop.  I am always doing something. 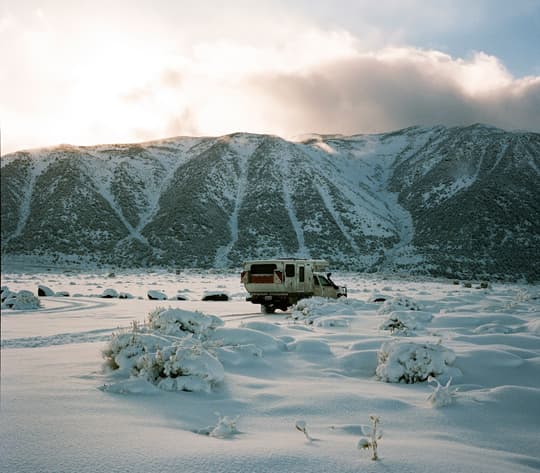 Above: Mono Lake on the east side of the Sierras, California

TCM: Your parents are in Washington State, and you mentioned traveling to Baja.  Do you have a route you follow?

Foster: I stick to Oregon, Nevada, Washington, and California.  I have not gone east of Colorado.  I have traveled from British Columbia, Canada down to Baja, Mexico.

TCM: How long do you stay in any one place?

Foster: I’ll stay a couple of weeks in a spot.  It really depends on what the waves are like.  The best thing about living the way I do is that I don’t have to have plans.  I go where I want to go. 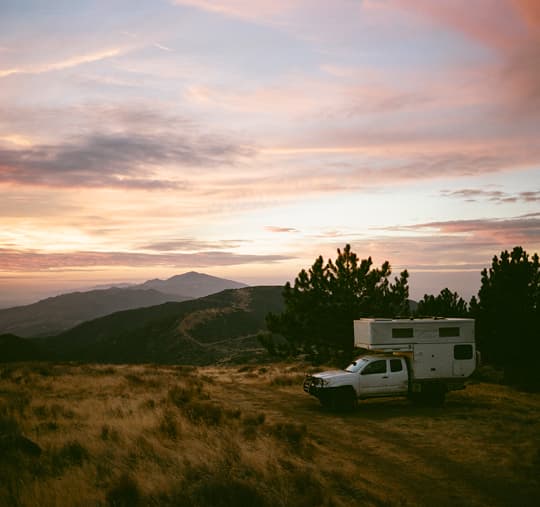 Above: Parked in the Los Padres National Forest on the central coast of California

TCM: That’s freedom.  Do you typically go to campgrounds or boondock off-the-grid?

Foster: I spend a bunch of time on BLM land and national forests.  When I’m surfing, I often stay in my friends’ driveways, or stealth camp with the camper roof down.  It’s a game of finding a place to sleep.  I like it.

I rarely stay in campgrounds.  Sometimes campgrounds are $50 a night.  That’s ludicrous.  I’m a tightwad, plus I favor national forests and BLM land.  There are so many state and national forests.  You can stay in pull-off areas there. 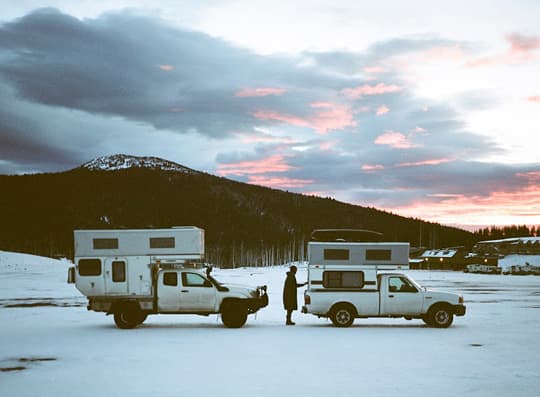 Above: Foster camping with his friend, Tim Eddy, and his Four Wheel Camper at the Mt. Bachelor parking lot in Oregon

TCM: Have you ever had an issue with stealth camping?

Foster: I have only been hassled once in two and a half years.  The cop even let me stay.  He just checked to see that things were okay.

TCM: Looking forward, what’s your vision for where this experience is going?

Foster: All I know is that I don’t want to stop.  In the back of my mind I know it’s going to be a challenge to re-acclimate to society.  Knowing how much fun I’ve had is going to make it even harder. 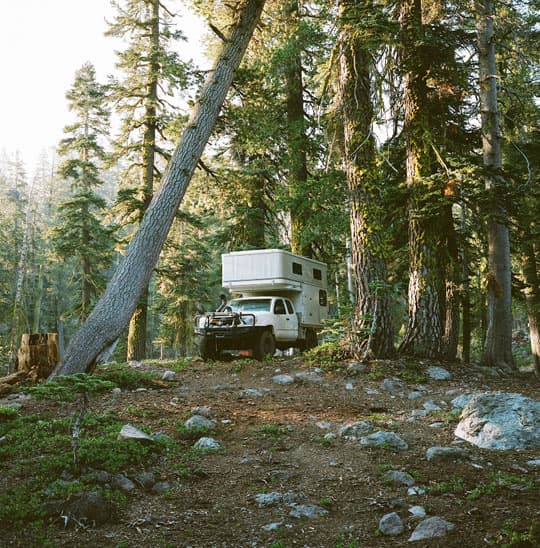 Above: Camping near Lake Tahoe, California

TCM: Do you have any idea what you might do this year?

Foster: In the Spring and Summer, I’ll travel through the Northwest and then down into California.  My plans are to surf and snowboard as long as I can.

I want to explore more of the mountain states like Montana.  Montana is calling me.  I’ll probably go there in September.

One thing about Summer is that everything is so crowded.  I try to visit the national parks in the Fall or early Spring.  Then, starting in October and November, I shift my focus to surfing.  November and December I’ll go to Baja.

I like wandering.  When I make plans I wind up breaking them.  I think it’s about manifesting the life you want to live and taking the risk.