It’s no secret that truck camper customers want the impossible.  We want every feature, every amenity, and every accessory in the world, but none of the associated weight or cost.  Don’t tell us something isn’t possible.  Don’t cry to us about how expensive the materials are.  Just give us a lightweight, energy-efficient, low-cost camper.  How hard is that?

In reality, it’s very hard.  Features, amenities, and accessories have weights and costs beyond the control of the camper manufacturers.  In fact, the lighter and more efficient a product is, the more costly it tends to be.  Consider the cost difference between incandescent lights and LED lights.  Consider the cost difference between luan plywood and a composite like Azdel.  Even with the growing popularity of LED lights and Azdel panels, they’re still significantly more expensive than their traditional tried and true alternatives. 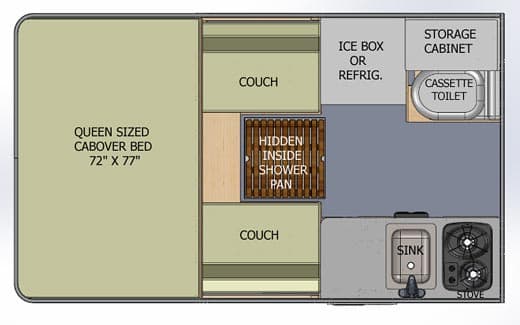 TCM: So how exactly did you put a shower and cassette toilet into an 80” long and 75” wide pop-up truck camper?

Tom: We had to do some consolidation.  We reconfigured the rear floor assembly which gave us a tiny bit more room in the back of the camper to accommodate the cassette toilet.  We’re using the C-200 Thetford which features a swiveling toilet bowl.

Finding room for the shower was the real challenge.  We have placed the shower between the dinette seats in the center of the camper.  The floor is raised to give space for the shower pan.  Obviously, this is a unique approach and our own design. 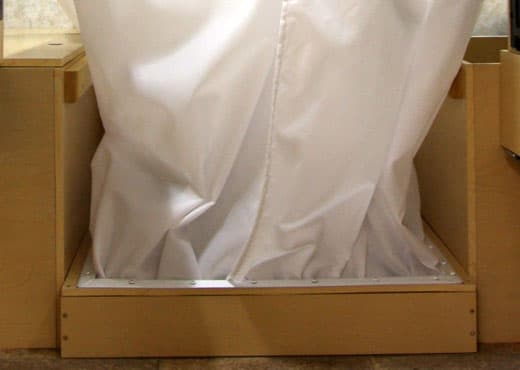 Above: Shower pan and curtain base

TCM: A shower in the middle of the dinette?  How does that work?

We’ve tested the shower and curtain here at Four Wheel Campers and it works great.  I know our customers are going to love this solution. 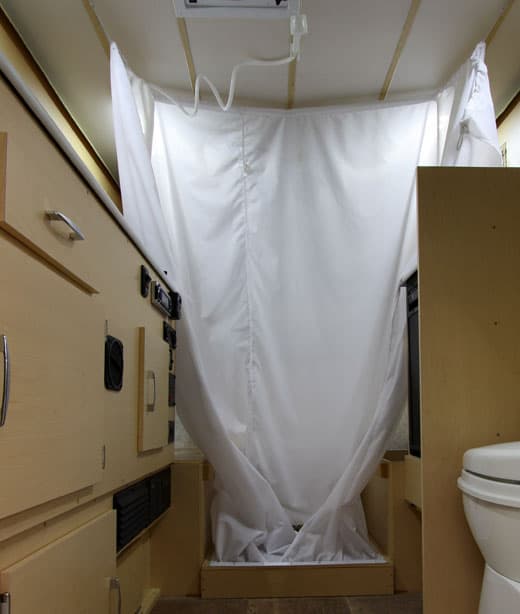 Above: The shower curtain attached above the shower pan and open for use 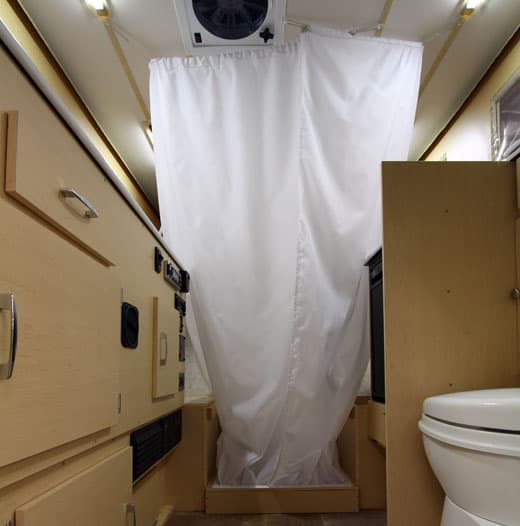 Above: The shower curtain closed for use 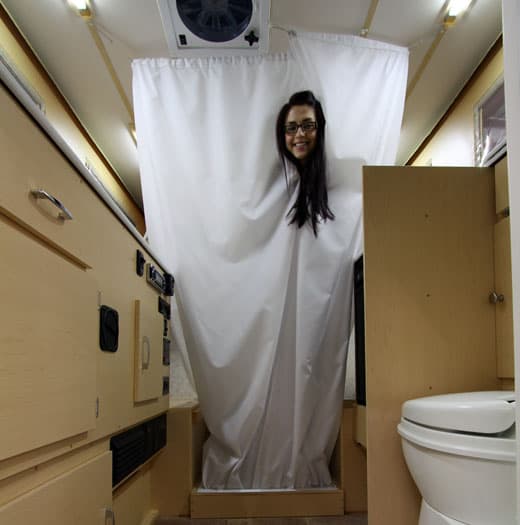 TCM: Is there a holding tank for the shower?

TCM: What Four Wheel Camper models is the self-contained option available for?

Tom: The self-contained option is currently available in our Fleet, Hawk, and Grandby models.  The Fleet and Hawk are short-bed models and the Grandby is a long bed model.  Models smaller than the Fleet are too narrow to accommodate the self-contained features.  The Fleet could go on a Tacoma, Frontier, or a Dakota.  Those are the most common trucks for the Fleet. 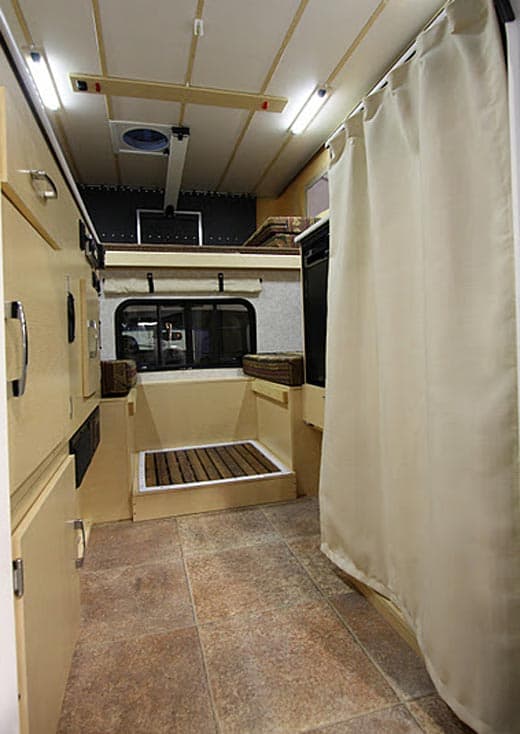 Tom: The self-contained option moves the center of gravity towards the rear of the camper because of re-positioning other components to accommodate the shower and cassette toilet.

Tom: Propex Heatsource furnaces are in all of the Four Wheel Campers we export to Europe.  They are very quiet and energy-efficient with a consistent heat curve.

I went camping in a Four Wheel Camper this past December and it got down into the teens and twenties Fahrenheit.  The Propex kept the camper at a constant temperature and the electric draw is less than two amps.  You also use the same or less propane because of the consistency of the unit.  It’s really nice.

The Propex fits into the same space as a standard Atwood or Suburban heater and we offer it as a $995 upgrade.  A standard heater is $495 so the Propex is expensive, but worth it if you’re out in the cold a lot.

TCM: Did you have to reconfigure the rest of the camper to accommodate the cassette toilet and shower?

Tom: We put the refrigerator on the passenger side and moved the sink, stove, furnace, and water heater.  The dinette offers adequate seating for two people.  This is a two-person camper with the amenities to go along with it.  It’s a very compact design. 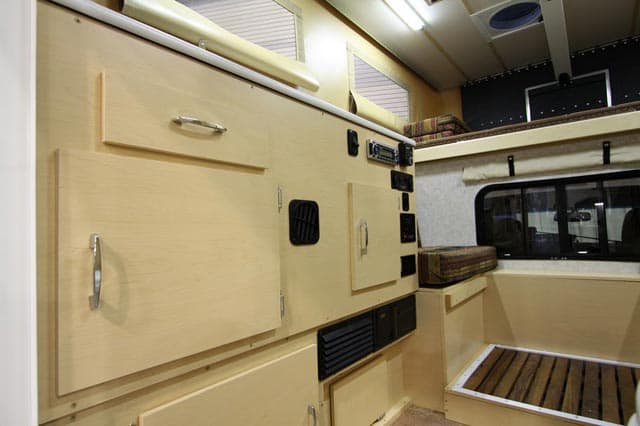 TCM: Was any storage lost in translation?

Tom: We did lose some storage, but there’s still a lot more storage available than it would appear.  There is absolutely no wasted space in this camper.  It was truly a creative exercise in finding storage opportunities.  There is not as much storage in the self-contained as there is in a regular Fleet, but you do have a shower and toilet.

It is possible to make a self-contained Four Wheel Camper with significantly more room and storage, but you would have to build it for a flat bed truck.  We have built flat bed Four Wheel Campers for specialty applications and for export to Australia, New Zealand, and England.

TCM: It sounds like you’re dropping a big hint that flat bed Four Wheel Campers will soon be available here in the United States.

We’re currently working on flat bed prototype ideas to mitigate this problem as much as possible for the domestic market.  Since we’re already building flat bed campers for export, our production team is ready to go.  As soon as we have a solution for the center of gravity, we’ll make an announcement.

TCM: What size holding tank does the C-200 cassette toilet have?

Tom: The cassette is four gallons and the fresh water reservoir is two gallons.  At that capacity, the C-200 is good for about fifteen or more uses before it needs emptying.

TCM: What is the base MSRP of the Four Wheel Camper Fleet Self Contained?

Tom: The base MSRP for the Four Wheel Camper Self Contained is $15,595.  With typical options, the camper is $18,015.  The model we brought to the Sacramento ISE is $21,670, loaded with almost every upgrade and option.

TCM: How was the reaction to the camper at the Sacramento ISE?

Tom: Very, very positive.  People have been asking us to build a self-contained camper for years.  Not having a toilet and shower has been a stumbling block for some people.  The response to the self-contained option has been very good and we’ve already had people strongly considering this product.

TCM: Will our readers be able to see the Fleet Self Contained at any upcoming RV shows? 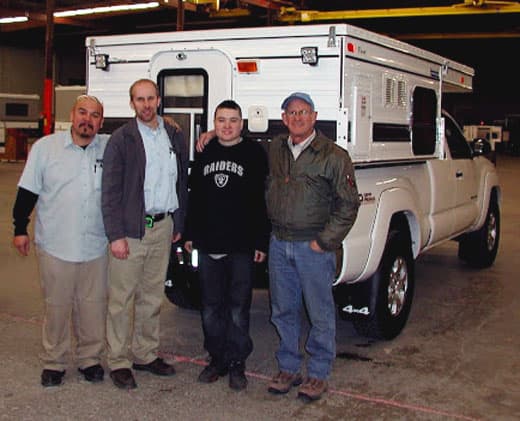 Above: Chicali, Jason Bahr, Elizabeth Diaz-Rojas, and Tom Hanagan with the Fleet Self-Contained

Tom: People can see the model we brought to the Sacramento ISE at the upcoming shows in Portland, Long Beach, San Diego, and the Overland Expo in Flagstaff.

TCM: When we interviewed you about the Raven in October you said, “We’re looking at lighter weight materials like lighter weight plywood for our cabinetry.  We’re also looking at the use of composites in the camper to increase the strength and decrease weight.”  Any progress on this front?

Tom: Yes we’re making progress with composites.  We’re continuing to research and examine the different components of the camper and trying different types of plywood for the cabinetry to save on weight.

Everything is going well at our new factory.  We are now offering the Filon fiberglass siding as a regular option on all of our campers. The Service department has grown and we are now providing a greater range of service offerings including repairs and refurbishing.  There are so many Four Wheel Camper owners out there who want to refurbish their campers.  With our new factory, we now have the increased capacity and space to handle their repair and refurbishing needs. Terry Budd, our operations manager, has done an excellent job of increasing the customer service quality and adding more and more value to helping our customers with repairs, upgrades, and refurbishing.

Speaking of repairs and refurbishing, our new dealer in Denver has dedicated half of his shop for the many 1970s and 1980s Four Wheel Campers in that area.  He was here at the Four Wheel Camper factory for almost a month working on the line.  He has formal training as a boat builder and has a thorough understanding of the complexity and nuances of the Four Wheel product.

TCM: We’ve been enjoying your steady flow of new Four Wheel Camper videos.  Are there any new videos in your future?

In the future, we’ll be producing a video teaching new customers about how to use their camper complete with a review of how the camper systems work.  People are very excited at the walk around we give them with their new camper.  A week later they sometimes wonder how things work again.  We are going to be providing a CD with the walk-through that will give them a thorough understanding of their new camper. After this, we will start a series on new topics.

We’re increasing our staff here at FWC.  The Six Pac camper line is coming closer to reality.  We’re actually working on the design this week.  Things are busy.  2010 was an excellent year and 2011 was our best year yet.  We have new dealers in Chile and South Africa.  Germany and Japan are doing well.  We’re excited because this year is Four Wheel Camper’s 40th anniversary.

TCM: Congratulations on the anniversary.  Gordon has a 40th anniversary this year as well.  Thanks, Tom.  We’re looking forward to seeing the new Six Pac.

Tom: I’ll let you know as soon as it’s ready.