As a magazine, we purchased our own truck camper last summer.  The camper is an eleven year old hard side non-slide manufactured by a company that is no longer in business.  As such, the camper is a politically neutral vessel, perfect for our ongoing personal use and published upgrades, modifications, and travel reports.

About a year ago, we caulked, sealed, and SealTech tested our used truck camper to make sure it was free of leaks.  Less than a year later, we noticed that a few visible seal breaks had appeared, and we inspected and repaired the seals once more.  It was a bit disheartening to see how much a few of the seals had deteriorated but, in all fairness, we had driven the camper coast-to-coast, into Canada, and back again.

As we completed the task of sealing the rig once more, I had an idea that’s been burning in my mind ever since:

Why can’t we do better than these ridiculous toothpaste-like sealants?  It’s 2015 for goodness sake.  It’s not like I have to caulk and seal my truck.  Why can’t we use an advanced coating and seal this entire unit in 360 degrees?

In essence, I want to “bullet proof” our camper.  No, I don’t mean make our rig impervious to Uzis and Winchesters.  I mean make it completely water proof – roof, sides, and underbody – with long-lasting coatings.  One of the coatings I had in mind for this idea was a bed liner.

About that time we found out that Palomino was preparing a Line-X treated camper to display at the annual industry open house in Elkhart, Indiana.  According to the initial reports, the camper was literally Line-X treated on the roof, sides, and underbody.

Obviously I was very excited that they had taken this concept and run with it, and a little freaked out that they might be listening to my thoughts.  Hey Palomino, how many monkeys am I thinking of?

All monkeys aside (it was five), we called Pat Hines, Director of Truck Camper Marketing at Palomino RV to ask about the new Line-X treated Body Armor Editions.  Naturally, he knew I was calling before I did. 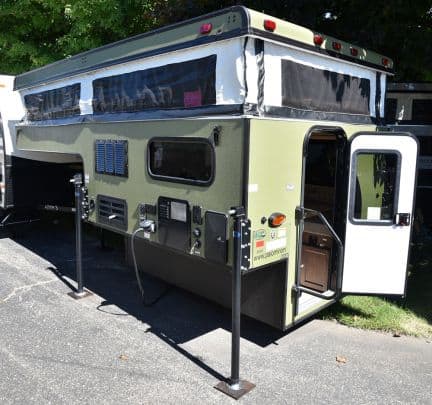 TCM: What is the concept behind the Line-X treated Body Armor Editions?

Pat: As an exterior coating, Line-X is extremely durable.  For that reason, we have been Line-X coating the front caps of our Solaire travel trailer line and the undercarriage of our hard side Palomino Max Elite truck campers for the past four years.

Both applications have been exceptionally popular with our dealers and customers.  More importantly, we have had virtually no warranty issues with Line-X coated front caps.  It’s almost rock proof.

Above: The Line-X treated Body Armor Edition SS-550 at the Elkhart show – click to enlarge

To test the interest in the Line-X treated Body Armor Edition SS-550, we brought a prototype to the RV industry open-house in Elkhart, Indiana.  Dealers had a lot of positive feedback, both on the concept and the final result, and placed a number of orders at the event.  The real proof will be in the customer reactions, and sales.

Above: The underbody is coated with black Line-X – click to enlarge

TCM: Why Line-X?  Why not use another brand of bed liner?

Pat: We believe Line-X is the best coating in the business.  In fact, we have invested in a dedicated Line-X booth here at Palomino RV.  We use Line-X exclusively.

TCM: Do the exterior materials – one piece fiberglass roof, high gloss gel-coat fiberglass sides, and pebble fiberglass underbody – need to be prepared prior to applying the Line-X?

Pat: Yes, the surfaces need to be scuffed to ensure proper adhesion of the Line-X.  In particular, need to remove the sheen from the smooth fiberglass sides so the Line-X will bond.  We use essentially the same scuffing process for the side walls, underbelly, and roof.

TCM: When during the manufacturing process is Line X applied?

Pat: Line-X is applied before the camper is assembled.  We build and vacuum bond laminate the side walls, wing walls, and floors separately.  Then those components are scuffed and brought to the in-house Line-X booth to be sprayed.  When dry, the Line-X treated components are then brought to the truck camper production line where they are assembled.

Above: Currently the Body Armor Edition is only offered on the 2016 Palomino SS-550 model (shown) – click to enlarge

TCM: Will Palomino be making Body Armor Editions of both pop-up and hard side Palomino models? 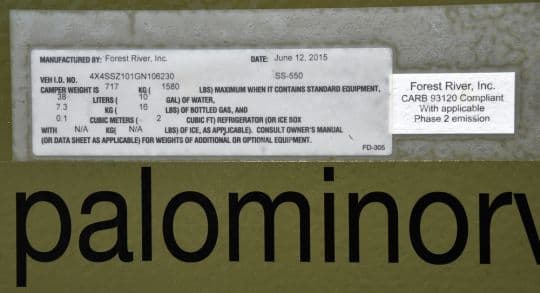 Above: The Line-X treatment added about 18-pounds to the SS-550 – click to enlarge

TCM: Does the Rieco-Titan electric roof lift system work well with the additional roof weight of the Line-X?

Pat: Believe it or not, the Line-X treatment only adds about 18-pounds to the total weight of the SS-550.  Line-X does not require a thick and heavy coating to be 100% effective.

The Rieco-Titan electric roof lift system is rated for 300 pounds for each of the four individual lifts, so the additional few pounds added to the roof by the Line-X application are not an issue. 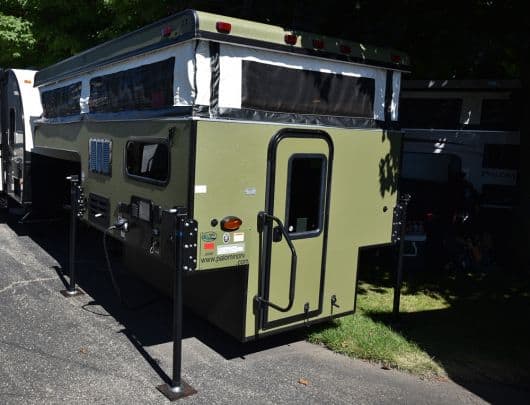 TCM: Other than the Line-X treatment, is there anything else that distinguishes a Body Armor edition?

Above: The seams and external features of the Body Armor Editions are caulked and sealed – click to enlarge

TCM: Why not Line-X everything but the windows and, in theory, get rid of the need to caulk and seal?

Pat: That’s an interesting concept, but there are a number of production logistics that prevent us from doing that.  There are also problems with coating items like compartments, refrigerator vents, and other exterior features with Line-X.

The only way to truly eliminate water intrusion is to have no holes in the exterior structure at all.  Since no one wants a camper without windows and a door, that’s not likely to happen.

Above: Olive green is the color of the Body Armor Edition campers – click to enlarge

TCM: Will olive drab be the only color of Line-X for the Body Armor editions?

Pat: Yes, the Body Armor Edition is only offered in olive drab green. 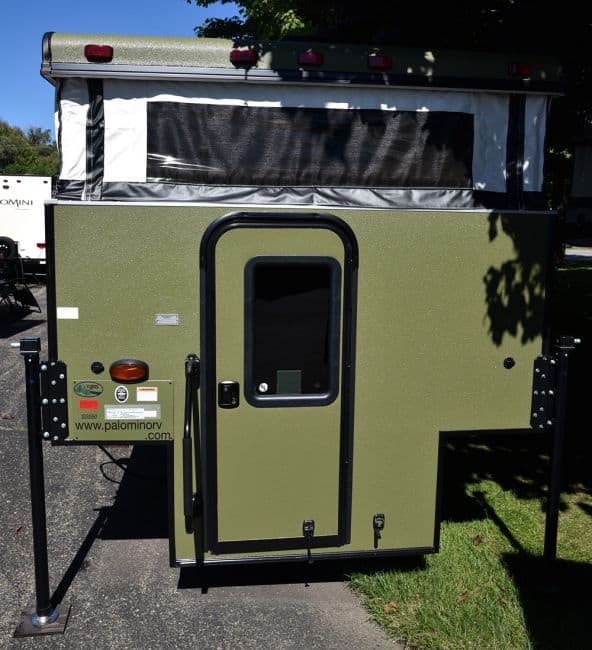 TCM: Does the Line-X affect the center of gravity of a Body Armor Edition?

Pat: No.  The center of gravity is unaffected because the weight of the Line-X is distributed evenly throughout the entire exterior of the camper.

TCM: Will the Body Armor editions be special order only, or in-stock at Palomino dealerships?

Pat: Some dealers will stock the 2016 Palomino SS-550 Body Armor Edition, and others will offer it as a special order.  It really depends on the dealership, and the market their geographic area offers for pop-up truck campers.

TCM: What will the Body Armor Editions cost compared to a standard build?

Pat: Line-X an expensive option.  Just ask anyone who has Line-X treated their truck beds.  Of course the quality and durability of the Line-X is well known.

TCM: Will the Body Armor Edition option be the same price if and when it’s offered on other Palomino models?

Pat: No, it will have different cost depending on the model.  Right now we have calculated the cost for the SS-550.  When the other models become available as Body Armor Editions, we will send you the option prices.

TCM: What is the warranty Body Armor Edition campers?

TCM: When will the Body Armor Editions be available?

For more information on Palomino pop-up truck campers, visit their website at www.palominorv.com/TruckCampers.  Click here to request a Palomino brochure.