In 2012, Happjac announced their next generation of truck camper jacks.  The new jacks were based on the proven design of their predecessors, but featured important new upgrades including zinc plating, a built-in wiper system, and higher tolerances making the new jacks quieter in operation and more resistant to corrosion.

Soon after, Happijac began research and development on a higher capacity camper jack to accommodate the increasingly popular double and triple slide truck camper market.  With 2,800 pounds of capacity per jack, the Happijac 4800 would have forty-seven percent more capacity than their next strongest camper jacks.

The 4800-HD began shipping in late 2012 for testing at Adventurer Manufacturing on their Eagle Cap 1160 double-slide and 1165 triple-slide truck camper models.  The new jacks were an instant success with the Adventurer engineering team and were featured on all 2013 Eagle Cap 1160 and 1165 models.

Aaron Rasmussen, Happijac Company’s General Manager, recently contacted us to formally announce the 4800.  He explained the distinctions that make the 4800 an important product in the Happijac line.  It’s quite possible that the 4800 will be the Happijac jack of choice in the near future. 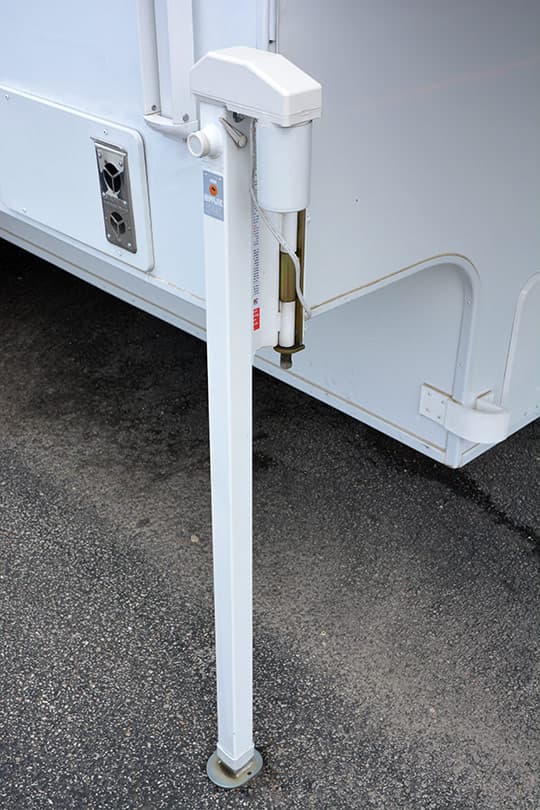 Above: The Happijac 4800 jack mounted on an Adventurer truck camper

TCM: How did the Happijac 4800 heavy duty jack come to be?

Aaron: The genesis of the 4800 was a customer asking for a heavier duty jack for their camper applications.  Our first priority was to make a jack that was stronger and that dramatically increased the load rating.  We also wanted the jack to be simpler, more efficient, and trouble free.

Myself, Gary Scothern, and the founder of Happijac, Marty Rasmussen, all had input into designing this jack.

Above: The bronze nut on the 4800 heavy duty jack

TCM: How did Happijac design, develop, and manufacture the 4800 to handle 2,800 pounds?

Aaron: The increased strength and load rating of the 4800 comes from three elements; a bronze nut on the screw, a larger Torrington thrust roller bearing, and a three inch longer outer tube and inner leg.

The big change is the bronze nut.  Most camper jacks are made with a steel nut.  The bronze nut and screw combination has a very high ANSI (American National Standards Institute) load rating.  The bronze nut also gives the 4800 jack more efficiency at the same load versus a steel nut due to the self lubricating properties of bronze.

The combination of the acme screw with the bronze nut in the 4800 jack provides a good balance for raising a camper up, and lowering it down.  Cost is the primary reason more camper jacks aren’t using bronze nuts.  However, with our in-house CNC machining capabilities, we are able to offer the 4800 jack at a reasonable price. 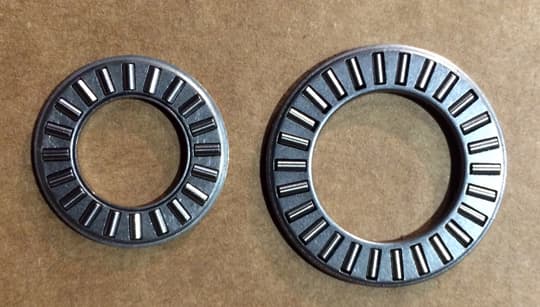 Above: The 4800 uses a larger and higher capactiy Torrington thrust bearing (on right)

TCM: How did the longer tube, longer inner leg, and larger bearing increase the strength and load rating?

Aaron: The longer tube and inner leg give the 4800 more overlap and stronger structural integrity, while the heavier rated Torrington thrust bearings provide more bearing surface and improve the load ability of the 4800.  All of these elements working together; the bronze nut, larger and higher capacity bearing, and longer tube and screw, give the 4800 the 2,800 pound capacity. 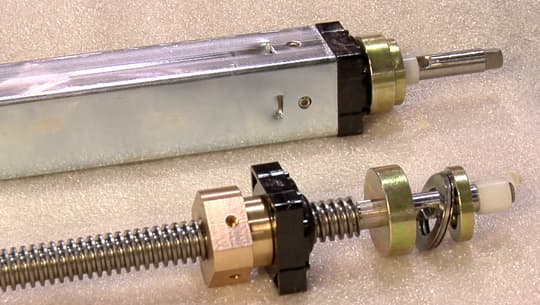 TCM: How was that capacity determined?

Aaron: First, we use ANSI standards for the diameter of the screw and nut being used in combination with the load ratings of the Torrington thrust bearings.  The screw, nut, and bearing combination we’re using has a 2,800 pound rating per jack.  Second, we physically tested the jack at a 2,800 pound load.  The 4800 consistently met this rating. 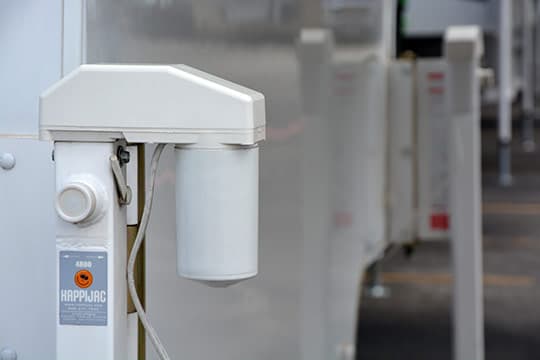 Above: The motor utilized for the Happijac 4800 is the same motor used on all remote electric Happijac camper jacks

TCM: Does the 4800 feature a different motor or gears from Happijac’s other jacks?

Aaron: We use the same motor in all of our remote electric jack systems.  We have been using the same motor successfully for over fifteen years.  Over that time period we have made incremental adjustments to improve the motor.  With its proven performance, high efficiency, and low cost, there was no need to change the motor. 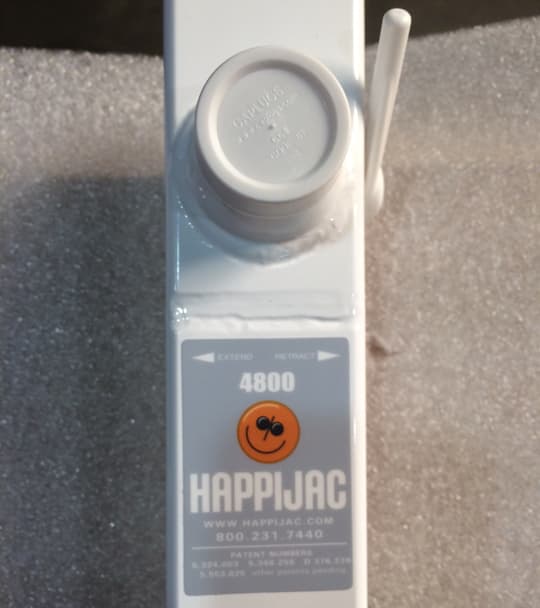 Above: The Happijac 4800 can be identified by a decal at the top of the jack

Aaron: Aside from the bronze nut, larger Torrington Thrust bearing, and longer jack leg, most of the materials and components are identical to our other jacks.

The main visual difference between 4800 and our other jacks is the longer leg length.  The 4800 also offers 36 inches of lift instead of 34.5 inches offered by our other jacks.

TCM: Are the jack brackets in the same location?

Aaron: Yes, the jack brackets are in the same location.  If a truck camper owner needs more clearance for loading their camper, the 4800 addresses that need.  The increased outer tube length allows the jack to have a lower starting point so that it does not have to extend as far to the ground before beginning to lift the camper.  With the lower starting point and 36” of inner leg extension, you can get more clearance between the truck and camper.

Aaron: With the Acme jack, we found a balance between the necessary efficiency when lifting and the required amount of friction when lowering.  In fact, the 4800 has enough friction with the Acme screw and bronze nut that no brake plate is necessary.  This design simplifies the internal jack structure and increases jack reliability.

TCM: That should make the jacks much quieter in operation.  Does the 4800 series come standard with an electric remote control, or is it an upgrade?

Aaron: We actually sell all of our jacks independent of the motor and remote control system.  From a purchasing standpoint, you buy the jacks and then can add a wireless motor drive assembly kit which has four motor heads, a wireless remote control, and a logic board whenever you want to upgrade to electric.

Most new truck campers that feature the 4800, like the Eagle Cap 1160 and 1165, come from the factory with an electric remote control system.

TCM: Does the 4800 series jack feature a quick release?

Aaron: Only the 4660 Ball Screw jacks have a quick release.  This feature is not possible with Acme jacks.  There is no quick release on the 4800.

TCM: What is the current draw of the 4800 series jacks?

When the 4800 jack was tested with 2,800 pounds, it drew 18 to 20.5 amps.  According to our own testing, the 4800 is drawing half the amps at that load compared to our competitors.  Going down it only draws four to five amps because of gravity and weight. 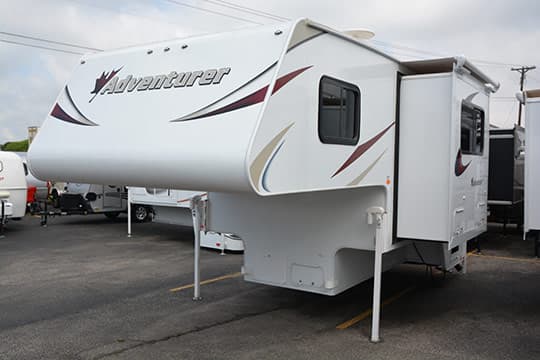 TCM: In years past Happijac jacks have had issues with the outer tube powder coat.  Have you made any changes to your powder coat technique or material?

Aaron: In 2012 we started zinc plating the outer jack tube and then powder coating over the zinc plating.  We also changed our powder coat supplier about a year ago.  Since we’ve changed to the new powder coater, we have seen very few, if any issues with the white powder coat finish.  Our new vendor does aerospace work so we have a high degree of confidence in their process.

TCM: Now that the new zinc coated Happijac jacks have been in the field for about eighteen months, how have they performed?

We’ve recently made changes to make water and snow drain better, so no water is being retained there.  You don’t want water sitting on the foot.  When you winterize try to keep moisture out of the jack motor and the foot by covering them.  This is good practice not just with Happijac jacks, but all truck camper jacks.

You will need to send us back your old jacks as part of the upgrade.  We like to get old jacks back, look at how they were built, see how they performed, and look for potential opportunities to improve our design and manufacturing.

Aaron: The warranty on the 4800 jacks is one year from the retail sale.

Since we started the 4800 we have not received one warranty or service call on the 4800 jack.  We feel very confident about the performance and reliability of this jack.  We think it’s the wave of the future.

TCM: Are Happijac jacks made in the USA?

Aaron: Yes, Happijac jacks are made in the USA.  The only part we source overseas is the 12 volt DC motor.  Everything else is made in the USA and assembled here at Happijac in Utah.

TCM: If someone reading this article has Happijac jacks and needs service, what’s available from Happijac?

Aaron: We have an offer for service and maintenance.  You send back your jack, we will refurbish it to our current standards for $59.95.  We’ll test it, refurbish it, and make sure it mechanically meets the factory standards and ratings. 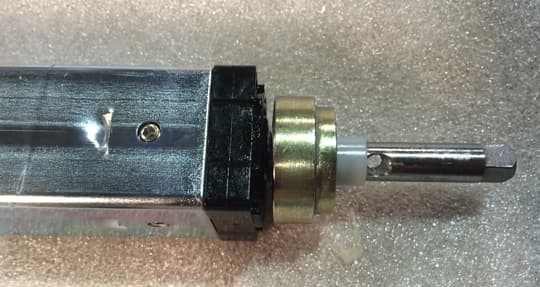 Above: The outer tube of the 4800 can be removed allowing for in-the-field disassembly and maintenance

TCM: What maintenance is required for the 4800 series jacks?

Aaron: The 4800 requires the same maintenance as our other jacks.  Periodically, wax exterior of jack, put 3-in-1 oil in the crank socket and turn it, and operate jack for the full length of the screw.

With the 4800 jack, the outer tube can be removed and you can see screws on the inner leg that allow us to disassemble the inner leg and completely take the jack apart.  This makes the 4800 field serviceable.  With the 4560 and 4660 you cannot take those jacks apart in the field without damaging the jack.  This is another important advantage of the 4800.

TCM: In the 2011 article, “Maintaining Happijac Camper Jacks” Happijac recommended storing a truck camper with the weight off the jacks when possible by using a support system under the camper.  Is this still Happijac’s advice?

Aaron: Yes.  Everything we stated in that article is the same for the 4800.

TCM: Is there anything else about the 4800 that you would like to add?

Aaron: I’ve touched upon the key features and benefits, like the extra overlap on the jack, the bronze nut, the bigger Torrington Thrust bearings, lower amp draw, the thirty-six inches of extension, and the fact that the 4800 has no roll pins or brake plates.  This is a trouble free and field serviceable jack.  Those are the main features and benefits. 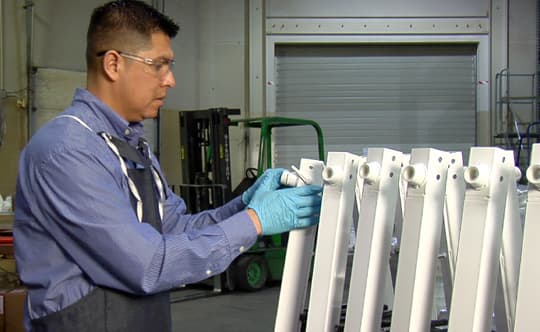 Aaron: Very well.  We continue to grow every year.  We’ve increased our workforce about twenty percent in the past year.  Most of our key people are now going on ten to fifteen years of experience, which is something we take great pride in.

Hands down, we believe the 4800 is now the best camper jack in the industry.  It should be on every camper!

For more information about Happijac, visit their website at www.happijac.com.