Palomino RV debuts a new hard side, non-slide, wet bath truck camper to its popular Max series. Kick it up a notch with the Elite Package and you’ve got a serious non-slide luxury truck camper contender.

Or did it? This year we have seen strong interest in the luxury non-slide category. Some folks are simply not interested in slides, but want to step up into more luxury. Others have had a slide-out truck camper and now want to return to the simplicity, lower maintenance, and lower weight of a non-slide – but they too want a luxury camper.

As dyed-in-the-wool non-slide truck camper folks, this is all music to us. With any luck, this trend will continue and we’ll have more non-slide luxury truck camper options in the marketplace. Speaking of which…

To find out more about the 2017 Palomino HS-2901, we talked to Pat Hines, Truck Camper Product Manager for Palomino. 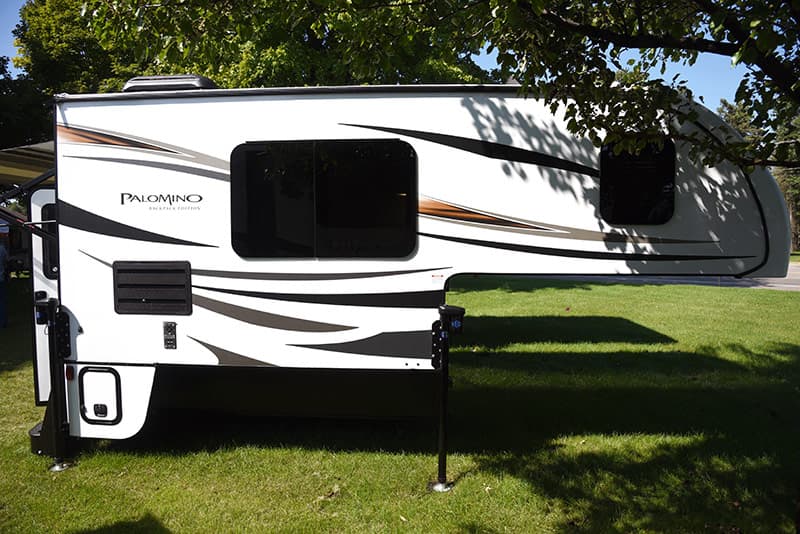 TCM: Before we talk about the new HS-2901, we want to ask you about the HS-2911 double-slide.  That model seems to have disappeared from Palomino’s 2017 line-up.  Has that camper been discontinued?

Pat: If we introduce a new model we typically eliminate one existing model.  To find out which model to eliminate, we evaluate how many of each model were manufactured and sold at the end of the year.  This year the Palomino HS-2911 had the fewest number of sales, so we chose to eliminate it.  For 2017, our new model is the HS-2901. 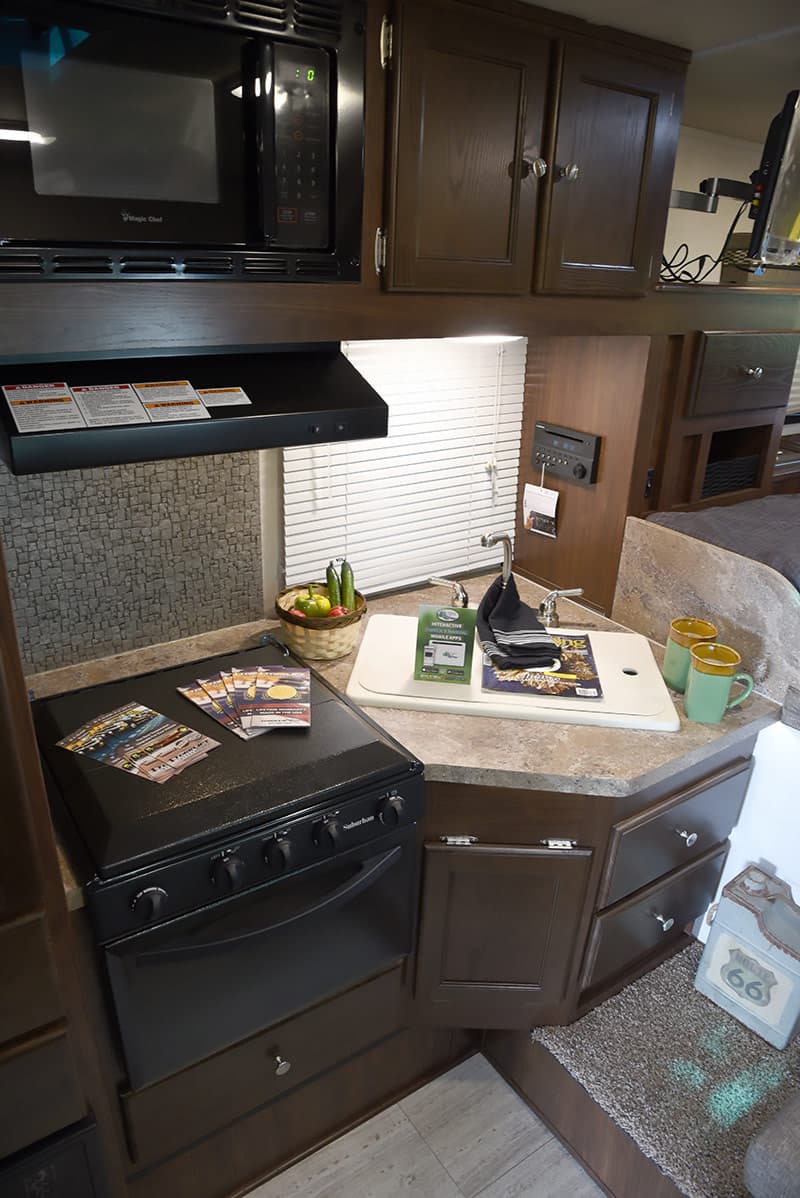 We like to give our dealers and consumers what they ask for.  Over the past year we had a lot of requests for a four season ready, non-slide truck camper model with a wet bath.  With the HS-2901 being a Max model, it also has a lot of luxury features. 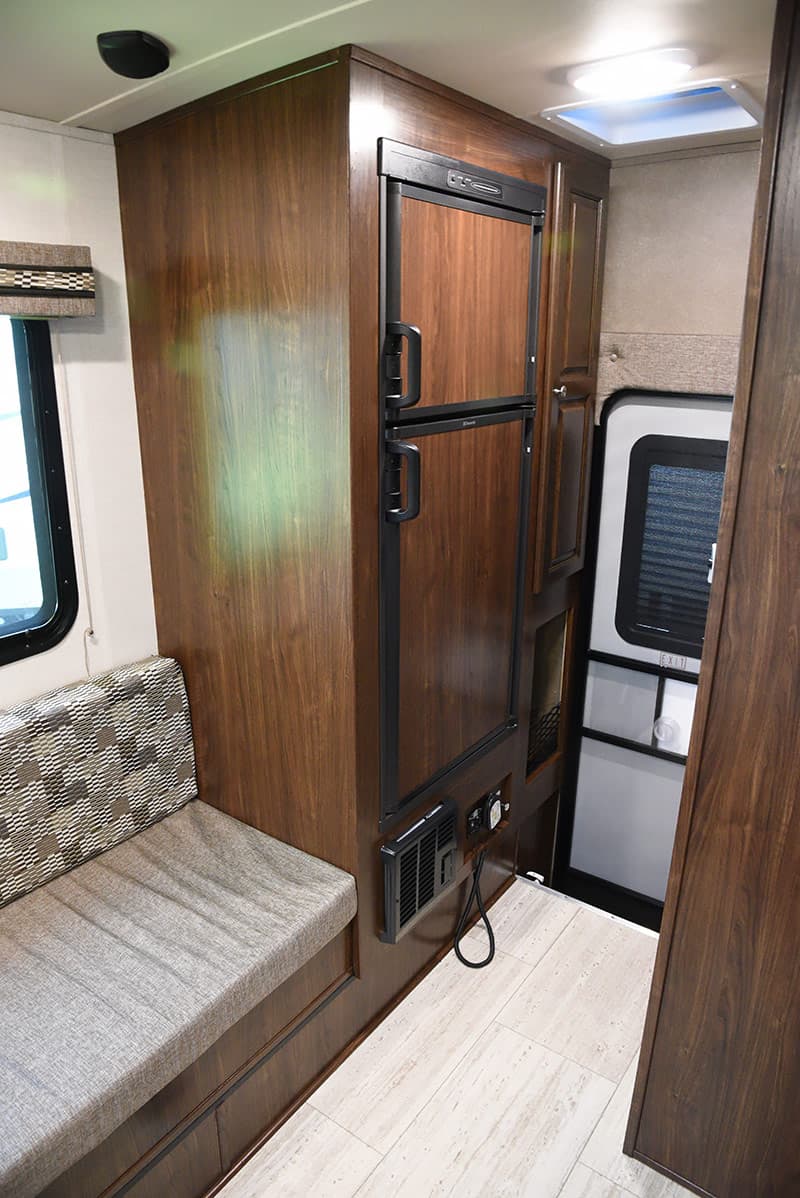 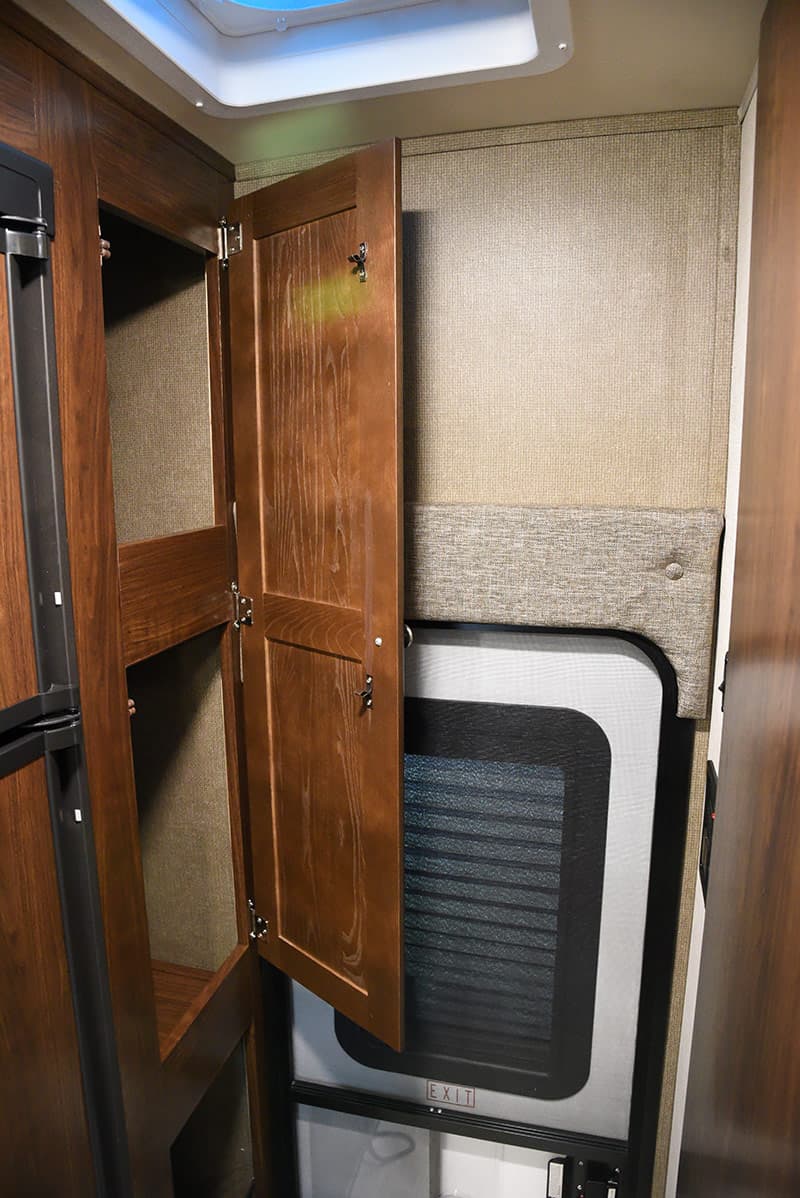 Above: As a non-slide the HS-2901 gains additional rear storage

Pat: You gain quite a bit of storage by not having the slide-out including a storage area at the rear entry, a pantry, and closet space. 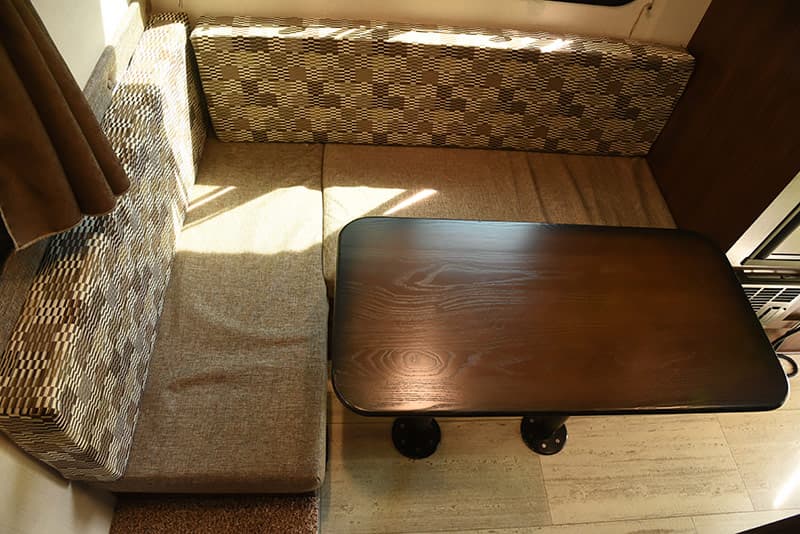 Above: The L-shaped dinette of the HS-2901 gives you quite a bit of room and storage underneath

You also gain a significant amount of seating area with storage underneath.  The HS-2902 is a couple’s dinette at best.  The HS-2901 dinette would be more comfortable for three or even four adults to sit. 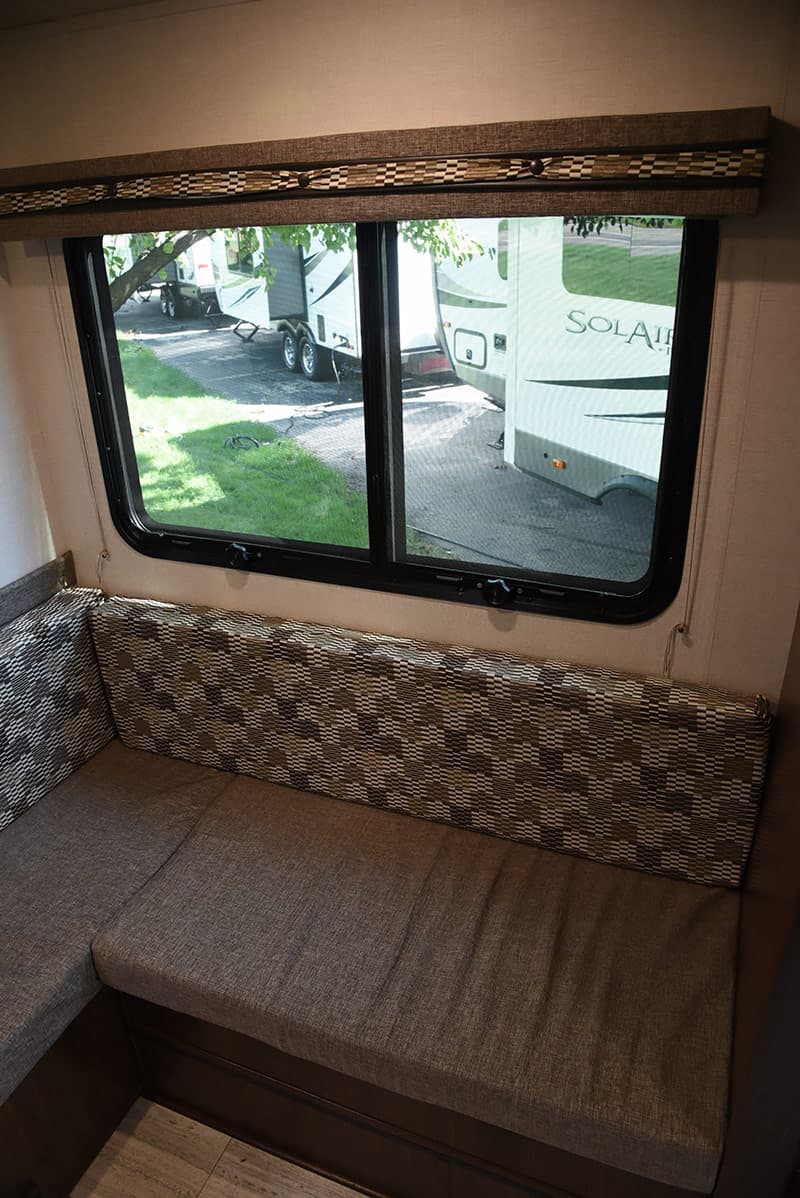 The HS-2901 also has a larger dinette-area window because the slide-out room isn’t taking up the wall space.  However, you lose the floor space that the HS-2902 slide presents when pushed out.  Do you want more floor space, or more storage?  That’s the big difference between the two units. 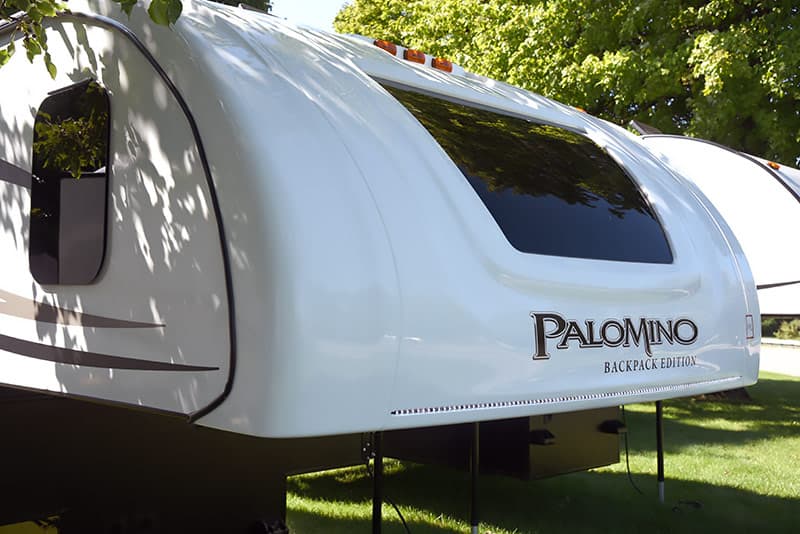 Above: The optional fiberglass front nose cap and windshield for the Palomino HS-2901

TCM: Is there anything unique about how the Palomino Max models are constructed?

Pat: The Max line is constructed the same way as all of our hard side models.  First, they are 100-percent aluminum framed.  Second, all six sides of the campers are vacuum bond laminated including the side walls, floors, and roof.  Our pop-up models feature the same vacuum bond lamination, but are wood framed.

What separates the Max line are a short list of important design elements, and standard features.  As I stated earlier, the Max campers have heated and enclosed holding tanks in a wheel-well height basement.  They are four-season units.  The Max series also features insulated windows standard, and are 4-inches wider than non-Max hard-side truck campers.  Lastly, the Max series can also come with the optional fiberglass front nose cap and windshield. 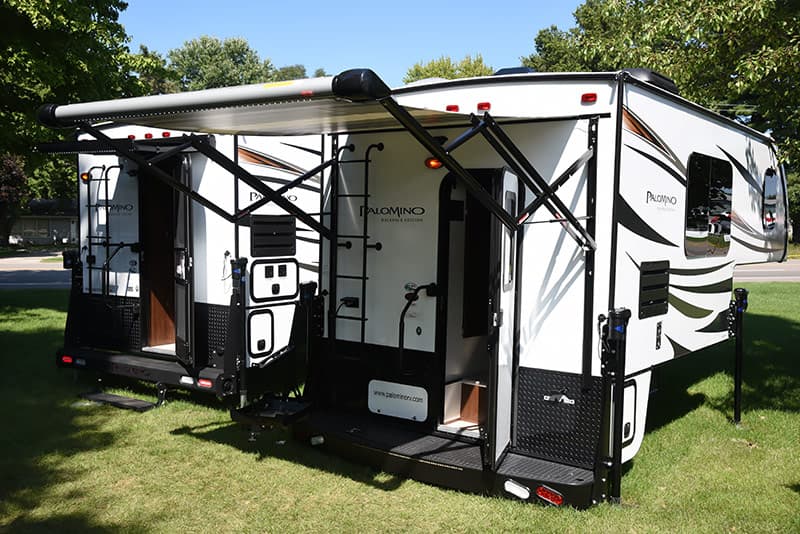 Above: The rear awning is part of the Elite Package

TCM: How does the Elite Package fit into the Max series? 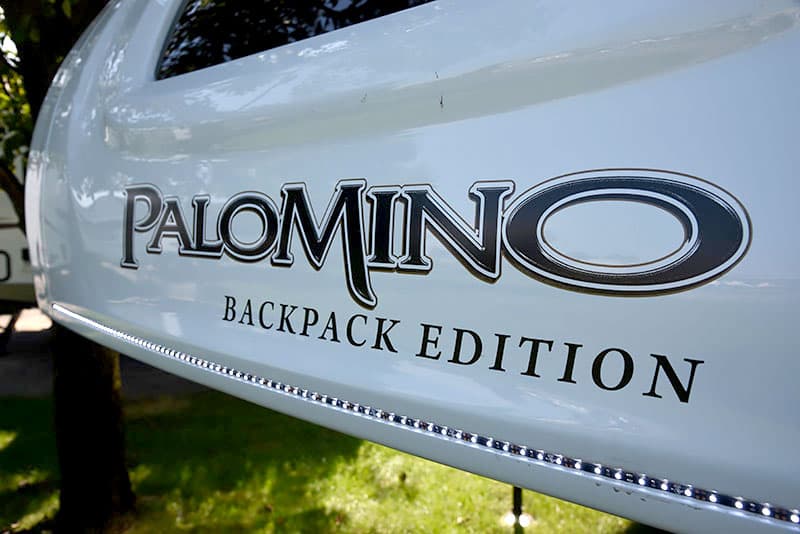 TCM: While we’re on the topic of brand names, what is the Palomino Backpack Edition?

TCM: Tell us about the cabinetry and counter tops in the Palomino HS-2901.

Pat: Palomino has debuted an all-new new decor for 2017 with darker walnut cabinetry and new fabrics, countertops, and flooring.

By offering only one interior across all Palomino truck campers, we can offer our customers the best value in the RV industry.  It also helps us to maximize efficiency and continuously improve quality control. 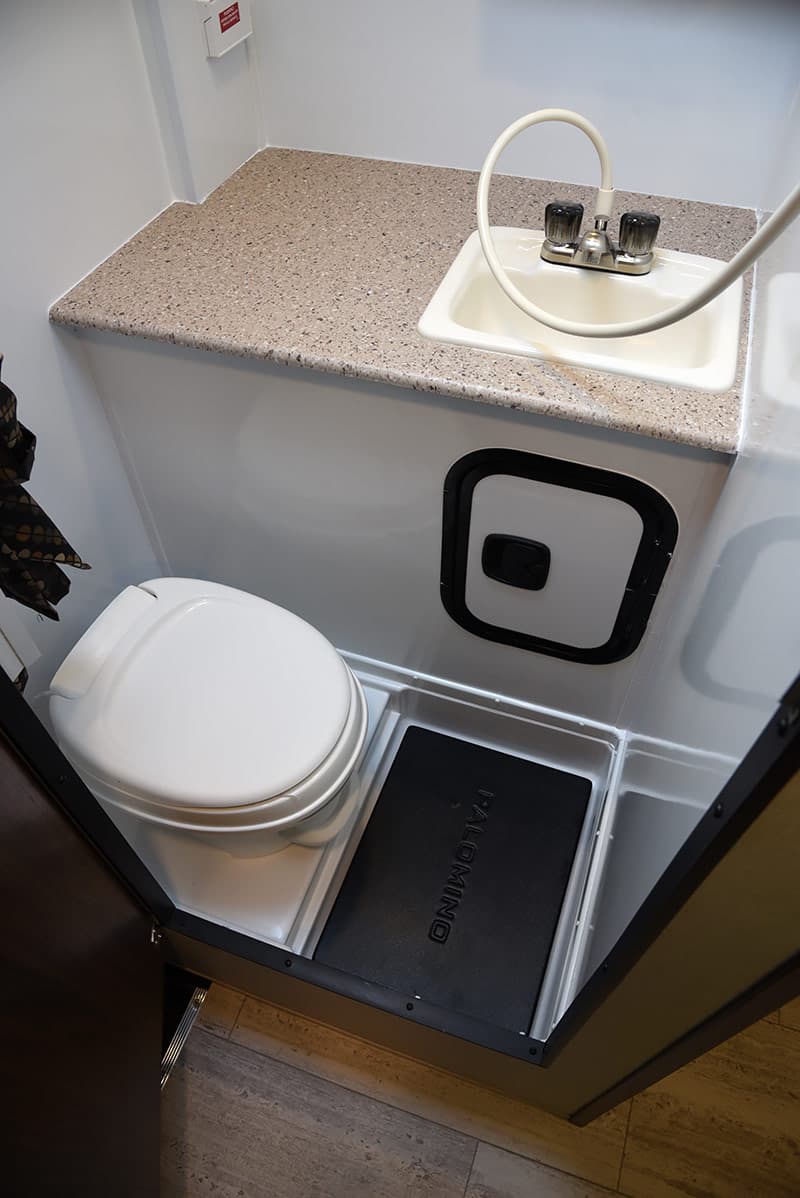 TCM: The tank sizes on the HS-2901 are the same as the other two Max-series truck campers?

Pat: Again, for efficiency of production and quality control, all Palomino Max-series campers feature the same 45 gallon fresh tank, 20 gallon grey tank, and 20 gallon black tank.  The basement designs are identical for the HS-2901, HS-2902, and HS-2910.  It’s all part of our Keep It Simple Stupid (KISS) philosophy. 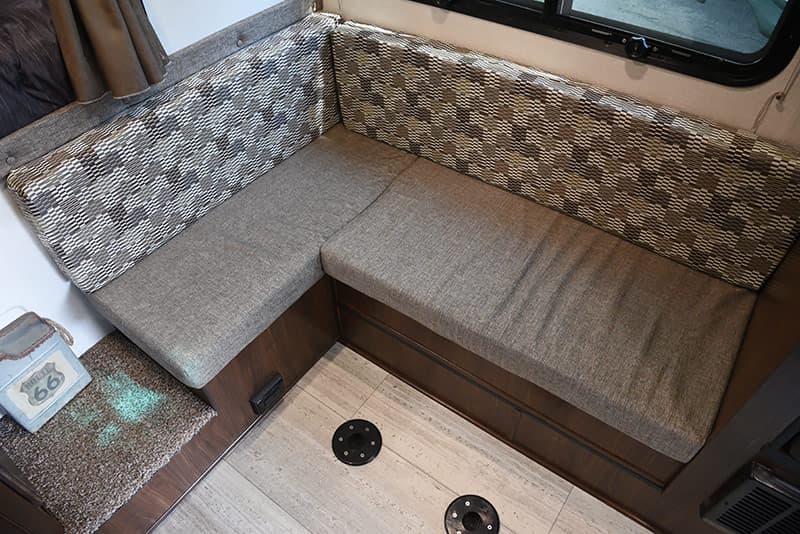 Above: Two vented battery boxes are housed under the step up to the cabover

TCM: How many batteries does the Palomino HS-2901 have, and where are they located? 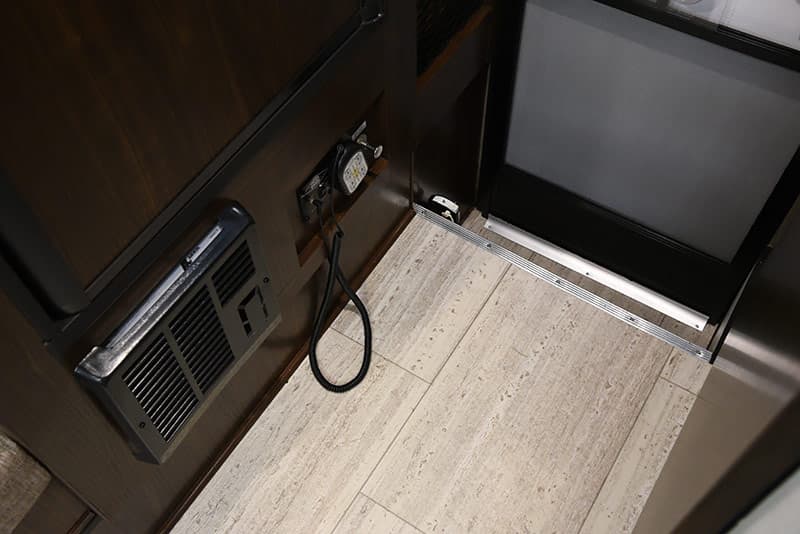 Above: The battery disconnect and Rieco-Titan electric jack remote are right next to the entry door

TCM: What considerations are given for winterization on the HS-2901?

Pat: It has low water drains, water heater bypass, anti-freeze tube, battery disconnect, and an exterior charge port.  The HS-2901 is a fully-featured Palomino, and has all the standard winterization features all of our Palomino truck campers offer. 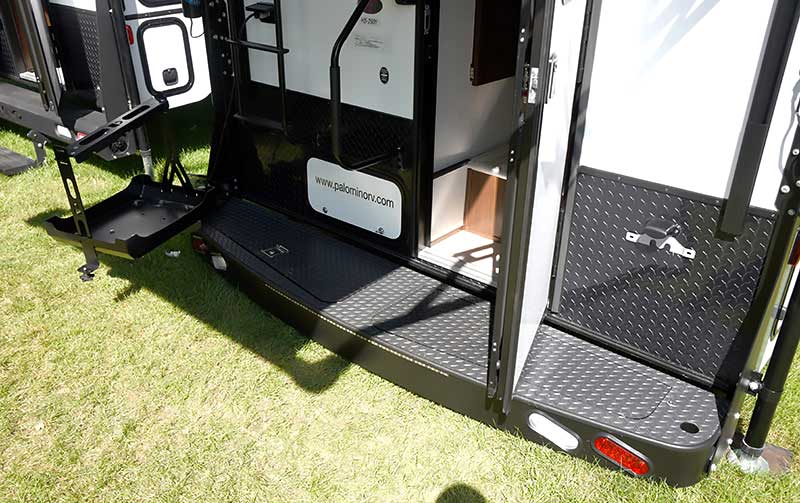 Pat: The Landing Pad is standard for the Max series.  It’s been received well.  It’s a nice 16-inch bumper with good storage opportunities.

That said, Torklift International is currently designing an all-new bumper for the Max line.  We will probably use the new bumper across the board for all Palomino truck campers; hard-side and pop-up.  Keeping with our KISS methodology, we don’t want more than one bumper system. 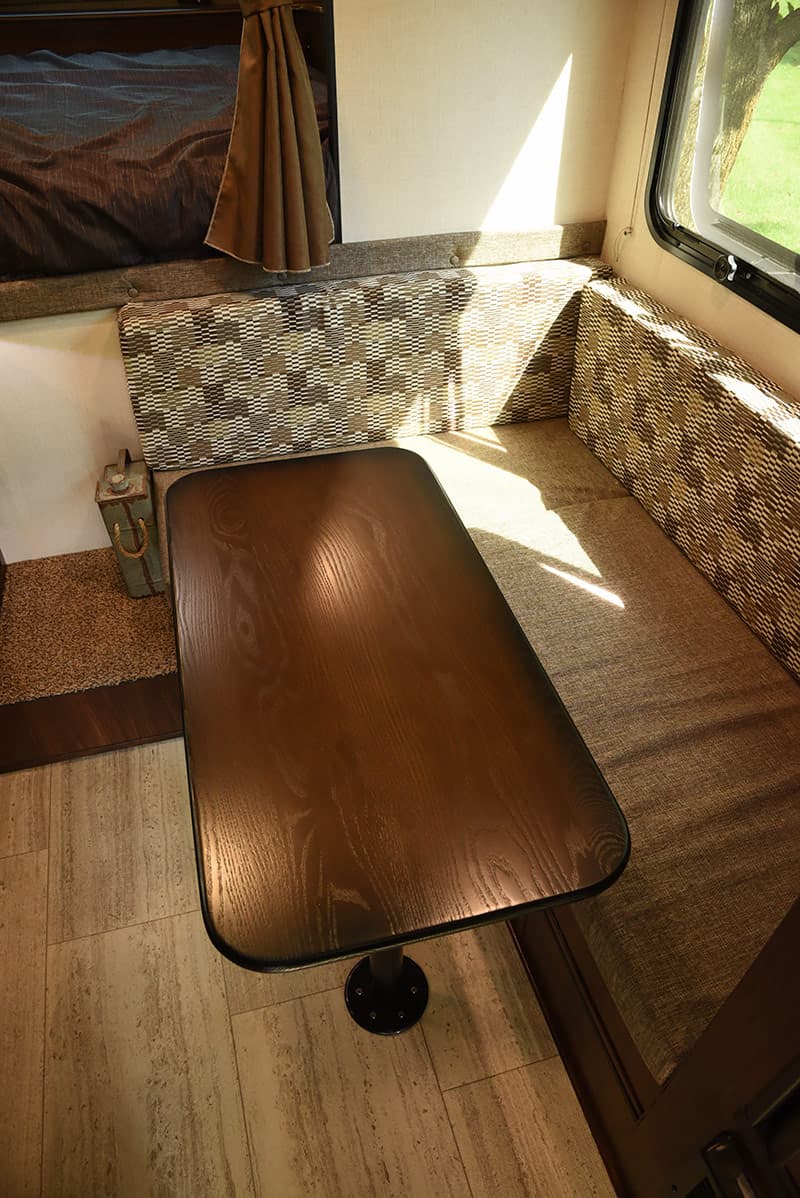 TCM: That’s exciting news.  We certainly look forward to learning more about the new bumper.  Looking at the floor plan of the HS-2901, the dinette area looks like an L-shape sofa with a small table.  What led you to use this design rather than a more traditional U-shape or face-to-face dinette? 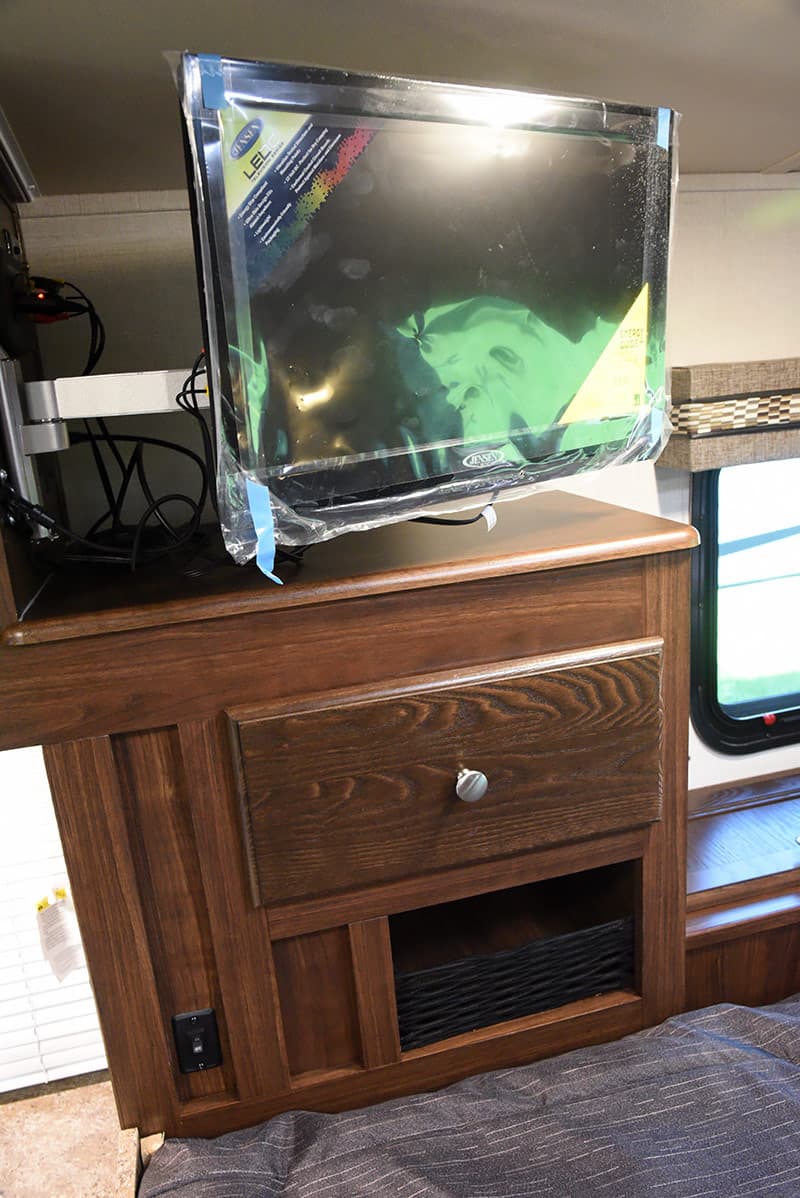 Above: A Jensen HD-television is standard

TCM: Are there any new options that are available for the 2017 Palomino HS-2901?

Pat: The front nose cap and windshield, an air conditioner, and a rear awning are options.  The Max series is really loaded with standard equipment. 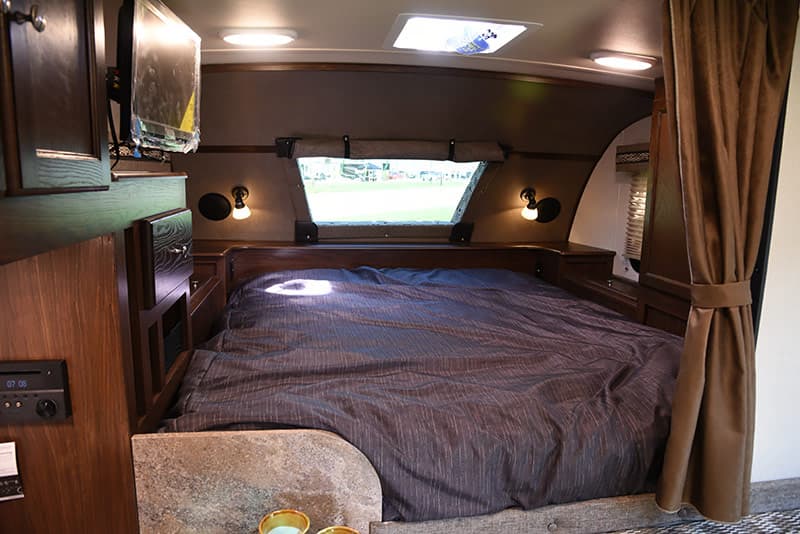 TCM: What does the 2017 Palomino HS-2901 weigh with standard build features?

Pat: The base weight without options is 3,034 pounds.

TCM: What is the MSRP for the 2017 Palomino HS-2901 with standard build features?

Pat: We have the same Palomino warranty across the board for all of our truck campers; one year nose-to-tail.  The appliances have their own warranties from the manufacturers.

TCM: Are there any other new model announcements coming from Palomino in 2017?

Pat: We are currently working on redesigning one of our old models that went away years ago, and we will be re-introducing it.  That model will be ready in December.  It’s going to be a hard side, half-ton camper with a toilet.  We will be debut it here in Truck Camper Magazine.

For more information about Palomino truck campers, visit their website at palominorv.com.  Click here to request a free Palomino brochure.