Every once in a while, the truck camper manufacturers will throw us a curve ball.  Usually we know about these pitches well in advance and can prepare, but not always.

Such was the new camper announcement interview for the 2014 Palomino HS-2911.  In all honesty, we were a bit jaded by the idea of a camper that merely added a kitchen slide to an existing model, the HS-2910, and was based on an already established and popular floor plan.  It made sense for Palomino, but where’s the excitement?

Then Pat Hines, Director of Truck Camper Marketing for Palomino RV, casually stated that Palomino had partnered with Torklift International to develop an all-new custom bumper system for the HS-2911; aka, the Landing Pad.

Pat seemed surprised at our surprise.

“I thought I had mentioned that during the 2014 announcement interview.”

“No.  Wait, you’re saying that you and Torklift International have been working on a new camper bumper, didn’t tell us, and now it’s on your 2014 truck campers?  Seriously?”

Then Pat emailed us pictures of the new bumper.  We were floored.  How did they keep this under wraps?  It was amazing.

To find out more about the Palomino HS-2911, including what’s in front of the rear bumper, we talked to Pat Hines, Chief Secret Keeper Who Better Tell Us Next Time for Palomino RV. 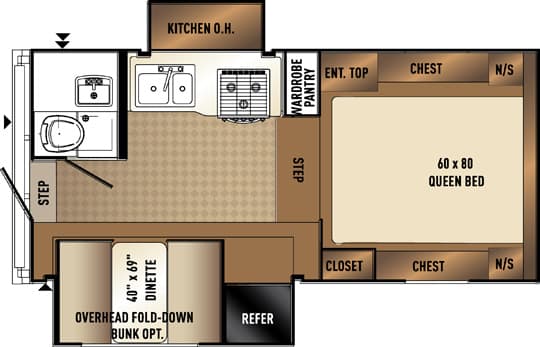 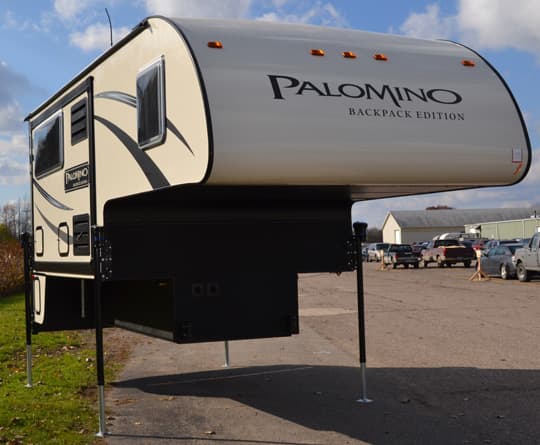 TCM: The floor plan for the HS-2911 has become a popular standard in the truck camper industry.  What distinguishes the HS-2911 from other versions of this floor plan?

Pat: We do this floor plan a little differently.  Everyone else has the overhead kitchen cabinets slide-out as the second slide.  On the HS-2911, the entire kitchen slides-out, floor to ceiling including the cabinetry.  The counter, sink, and stove all slide in and out.  This really opens up the floor space and makes the HS-2911 a stand out camper. 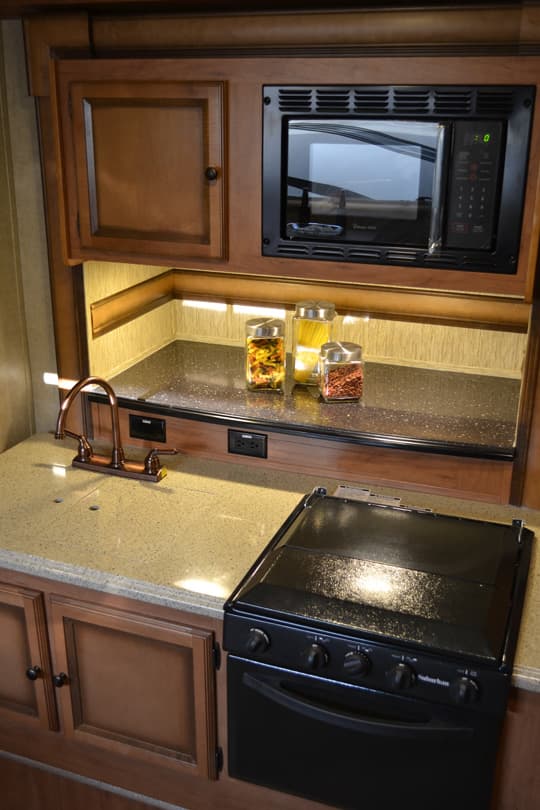 TCM: From the floor plan and photographs, it looks like the cabinetry and counter space behind the sink is very deep.

Pat: Yes, that is a deep space.  And it’s two tier with the overhead countertop four inches above lower countertop.  It can be a reach to get to the back of the second counter.  I am 5’10” and I can barely reach it.  We feel it’s better to have more space than to not have it at all. 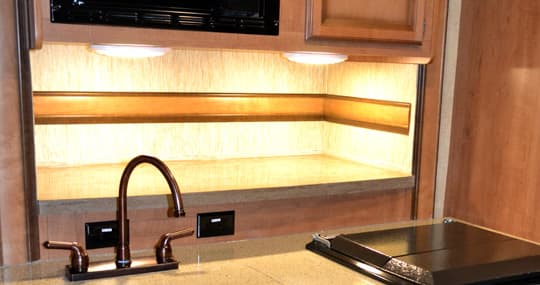 Above: LED lighting in counter space

In that space, there’s room to set out a coffee pot, and leave it out while you’re camping.  Rarely in truck campers do you have that much counter space.  The real bonus is that it’s usable space that doesn’t interfere with anything else.  We also put LED lighting underneath the counter giving that space plenty of light. 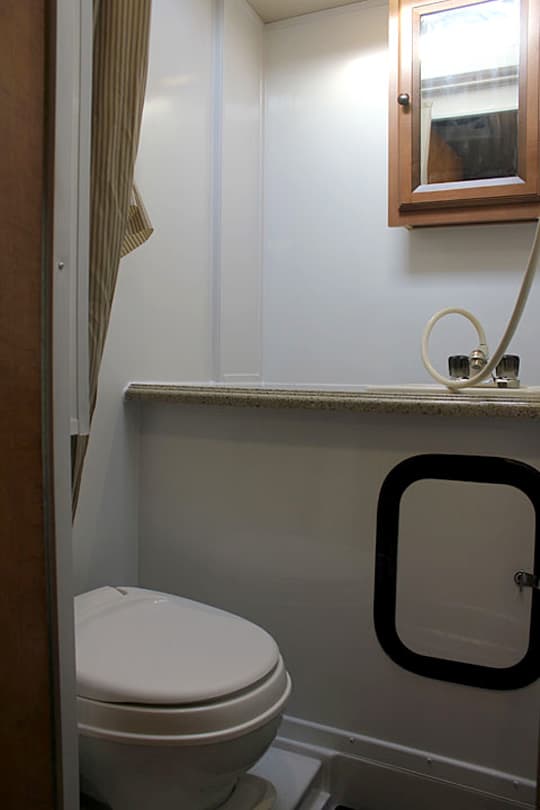 TCM: Does Palomino intend to eventually put a dry bath in a truck camper?

Pat: A dry bath has been brought up in design meetings.  Palomino has made a really nice progression toward the bigger campers in the last two and a half years.  We didn’t have anything with a basement before debuting the 2902 just two years ago.  That was our first entry into the four season camper market.

From the feedback we are getting, people are looking for full-time campers from Palomino.  We are talking about a dry bath, but it’s not yet on paper.  We’ll roll the HS-2911 model out and get more feedback.

At the dealer open house in September, the HS-2911 was very well received.  We are very excited to get this camper out for everyone to see.

Above: The cabover of the Palomino HS-2911

TCM: Is the HS-2911 basically just a HS-2910 with a kitchen slide, or is there more to this floor plan than just an additional slide?

Pat: There’s more.  We went to a completely new cabover design with the 2911.  We actually added a big two door closet on the passenger’s side. 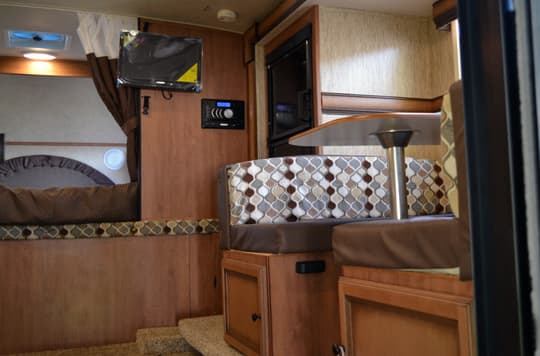 Above: The television is on the wall next to the refrigerator

We moved the television to the wall in front of the closet next to the refrigerator.  It’s on a fixed wall with a swing out bracket.  It’s in your living area, but at night you can swing it around for the cabover. 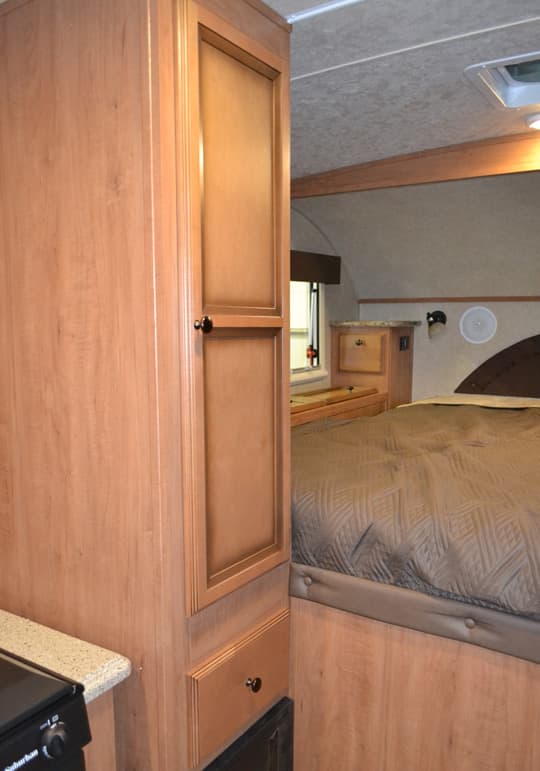 Above: The pantry is to the right of the kitchen area

There is also a pantry next to the kitchen slide. 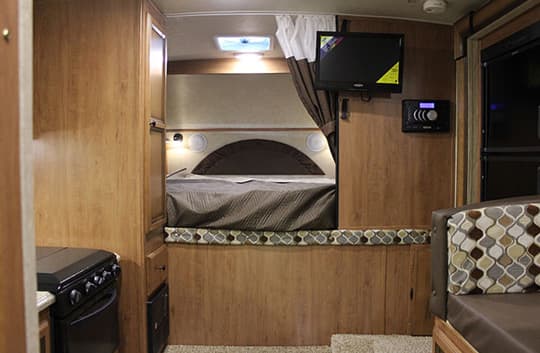 Above: Looking at the cabover area from the back door 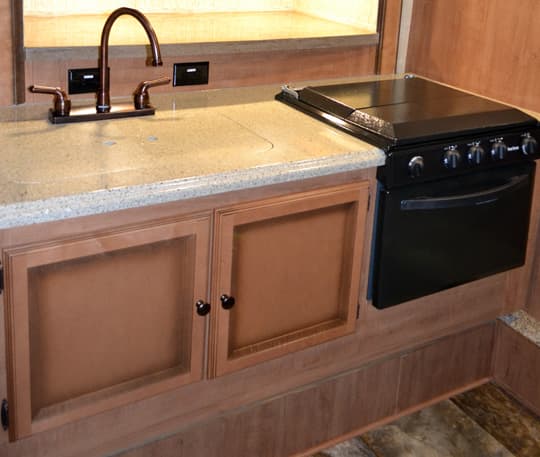 Above: Undercounter storage in kitchen

TCM: After the first prototype was completed, were there any adjustments made to the design of the HS-2911?

Pat: The prototype is what we introduced to our dealers at the dealer open house back in September.  From feedback at the show, we’ve improved the under counter storage in the kitchen and made a small number of other adjustments.  Other than that, the dealers really liked the layout.  I think your readers will like it too.

TCM: Why would someone get a 2910 if the 2911 has another slide and updated features and design?

Pat: The 2910 has a lower weight and price.  Plus this double-slide layout may not be for everyone. 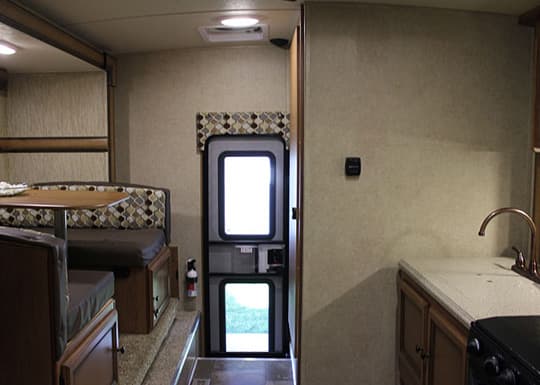 Above: The back of the camper features a full booth dinette and wet bath

TCM: Good answer.  Sometimes a customer might want another slide, but they’re better off with the camper that fits within their payload, or their budget.  Can you access the bathroom with the dinette slide-out in?

Pat: No. We use a regular swing-out door for the bathroom.  Plus, the dinette slide is quite deep and doesn’t leave a lot of room in between the bathroom door and the slide-out when it’s in.  You can always move the slide out a few inches to access the bathroom.

TCM: That’s what we do with slide-out campers in those situations.  Were there any new materials, components, appliances, or processes used in the development of the Palomino HS-2911?

Pat: It’s built with our all aluminum frame and it’s vacuum bonded.  It’s got the same materials and construction features we use across the board.

The Elite Package shows what Palomino can do for high-end campers.  The Elite Package campers feature solid surface countertops in the kitchen and bath, stainless steel sinks in the kitchen and bath, a Carefree of Colorado power awning with LED lights, and a wireless backup camera that you can use in cab of your truck or in the camper while parked.  The underbody of camper is sprayed with Line-X and there are motion sensor porch lights on the rear of the camper.  The Elite Package is only available on our 8801, 2902, 2910, and 2911 hard side models.

We want to knock people’s socks off with the features we are putting in our campers, especially for the price.

Above: The Lippert Schwintek slide system

TCM: What slide mechanism does the Palomino HS-2911 use?

Pat: We’re using the same slide mechanism in all of our 2900 series models, the Lippert Schwintek slide system.

TCM: What size is the basement in the HS-2911; wheel wheel, or truck rail?

TCM: Why does Palomino use those tank sizes in the HS-2911?

Pat: They’re the same size tanks we use in the HS-2901 and HS-2910.  Essentially, we designed one basement that would work for all three campers.  The tank sizes are included in that design.

We keep as much as possible consistent throughout our production models.  We order our parts in bulk.  We keep the part numbers down as much as possible.  We streamline manufacturing techniques for our production teams.  These efficiencies are what allow us to be so aggressive with our pricing while maintaining a high level of quality.  That’s how we do it at Palomino.

TCM: Tell us about the battery and propane capacities of this camper.

Pat: The two batteries are enclosed under the cabover step.  There are two vented spaces for your batteries.  There is also a battery disconnect next to the back wall and a charge port on the exterior of the camper.  For our 2014 models, we really wanted to invest in things like the charge port so that you can trickle charge your batteries and not have to take them out all winter.  It makes the camper more customer friendly. 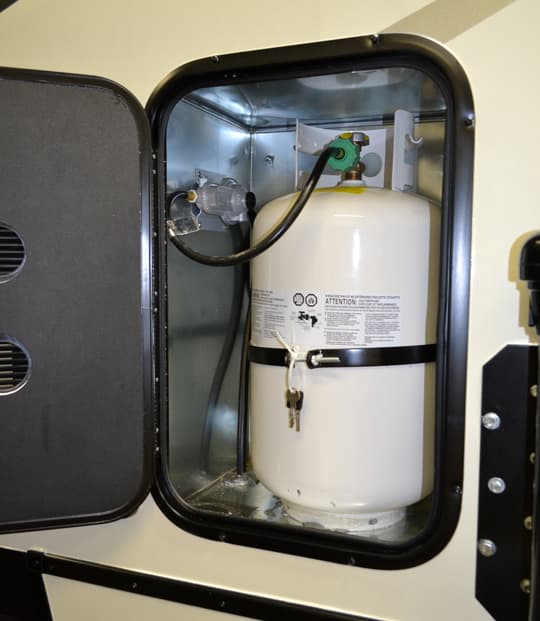 For propane, the HS-2911 has a single thirty pound tank.  It is the same diameter as twenty pound tank, so you can use whichever size you’re comfortable with.

TCM: Tell us about the standard bumper and entry step system for the 2014 Palomino HS-2911.

Pat: That is our big news for the HS-2911.  We are announcing the all-new Palomino Landing Pad aluminum bumper system by Torklift International.

We debuted it at the dealer open house and are now announcing it to the public, but it’s been in development for months. 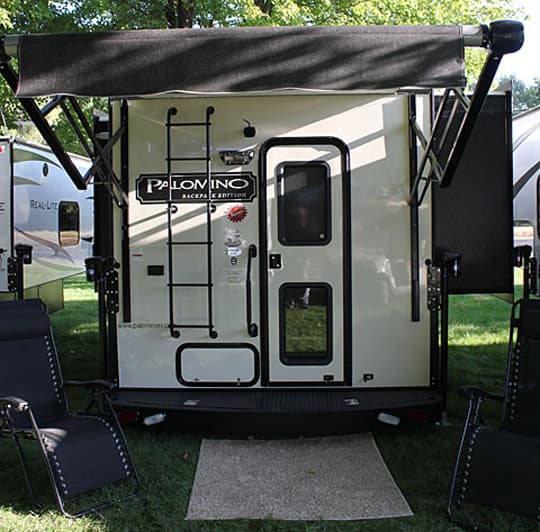 Above: The new Landing Pad bumper is featured on the 2900-series truck campers

TCM: Is this new bumper the standard, or is it optional for the HS-2911?

Pat: The Landing Pad is our new standard bumper for our 2900-series truck campers.  We partnered with Torklift International to design and manufacture an all-aluminum bumper with dry and lockable storage.  They really hit it out of the park with this design.  We love it.  Best of all, Torklift International gives the bumper a lifetime warranty.

TCM: Tell us about the features of the Landing Pad.

Pat: It offers sewer hose storage and the ability to plug in future accessories.   There are pins so that you can adjust the step, if you are towing, to where you want it.  Your readers will also love the porch-like area that you step on.  It’s solid.

This bumper is unique and an exclusive for Palomino campers.  Needless to say, we’re very excited about it.

TCM: Can folks with older 2900 series campers upgrade to the Landing Pad bumper?

Pat: Actually, they can.  Anyone with a 2900 series camper can put this bumper on through their local Palomino dealer.

TCM: What will that upgrade cost? 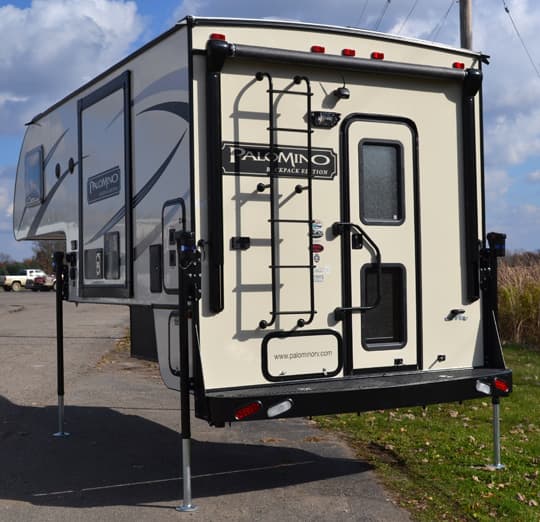 Above: The rear of the HS-2911 features the Landing Pad bumper

TCM: Since the dealers are almost exclusively ordering the HS-2911 with the Elite Package, what does the HS-2911 weigh with that option? 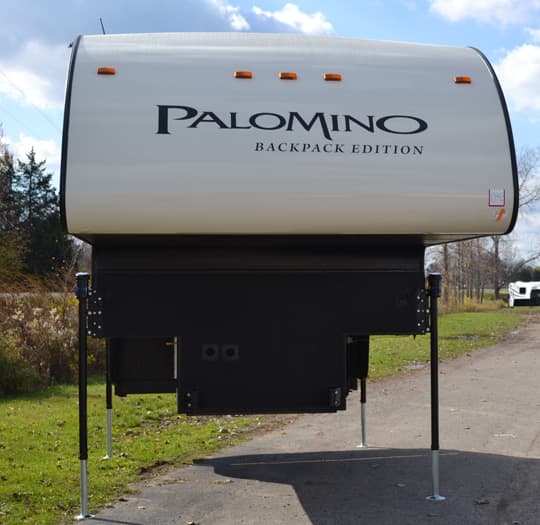 Above: The Palomino HS-2911 Elite Package with Line-X underbody

Pat: We have our standard one year warranty on the camper itself.  And the appliances, including the refrigerator, microwave, and stove top, have their own individual warranties.  The Landing Pad comes with Torklift International’s lifetime warranty.

Pat: The HS-2911 is on dealer lots right now.  It will be at RV shows starting during show season in January.

For more information on the Palomino HS-2911 and other Palomino truck campers, visit their website at www.palominorv.com/TruckCampers.  Request a free Palomino brochure.