TCM’s first impressions of the Lance 1062.  The basement is taller.  The windows are bigger.  Does it really add up to something more than the 1052?  Let’s find out.

This past summer, Lance Campers debuted the 2016 Lance 1062, a new truck camper model based heavily on the outgoing 1052.  The 1052 itself was launched by Lance Campers about eighteen months earlier, making this something of a surprise change.

When we asked about this during the Lance 1062 announcement, they broke the changes into three categories; a taller basement and wider floor, larger thermal pane frameless windows and an added slide-out window, and a laundry list of small tweaks and enhancements stretching from one end to the other; new pull-out tray, new exterior service center, wider and taller entry door, new app-based stereo, magnetic exterior compartment door holders, and more.

While Lance’s sales and marketing team made an excellent case for the improvements, we had yet to see the 1062 for ourselves.  Our big question was this; is the 1062 just a warmed-up 1052, or does the sum of the 1062 changes add up to a whole new – and significantly better – truck camper?

The Elkhart Open House in mid-September was our first crack at seeing the 1062 for ourselves.  We were excited to see the new Lance, but half expected to be unable to tell it apart from the Lance 1052, at least at first blush.  We knew the basement had been raised and the floor widened, but would we be able to tell from just walking in the unit? 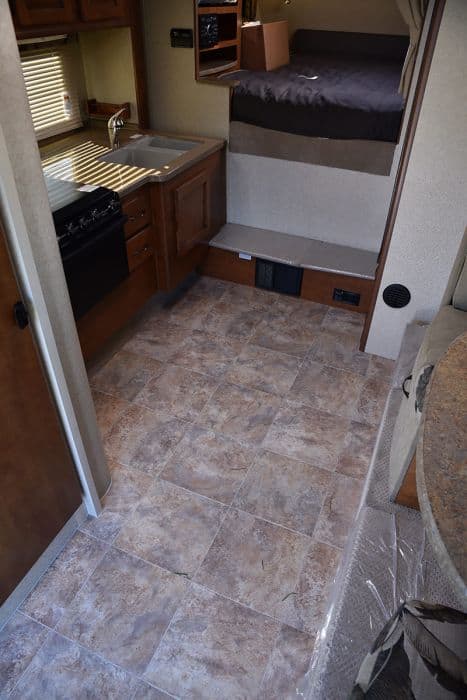 In a word, yes.  The difference is not subtle.  While the 1052 interior had a nice sense of open space, the 1062 feels like a dance hall.  Paper airplane fliers rejoice! 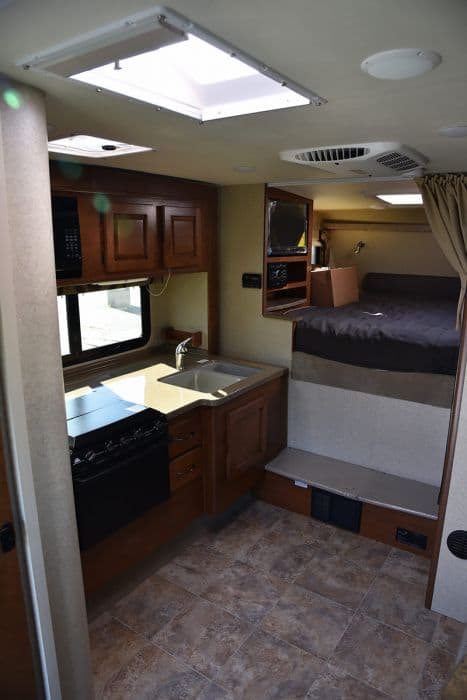 Seriously, you could almost play lawn darts in this camper.  Not the sharp metal population-control lawn darts we all threw straight up into the air as kids.  Stick to Nerf, and it’s game on in the 1062. 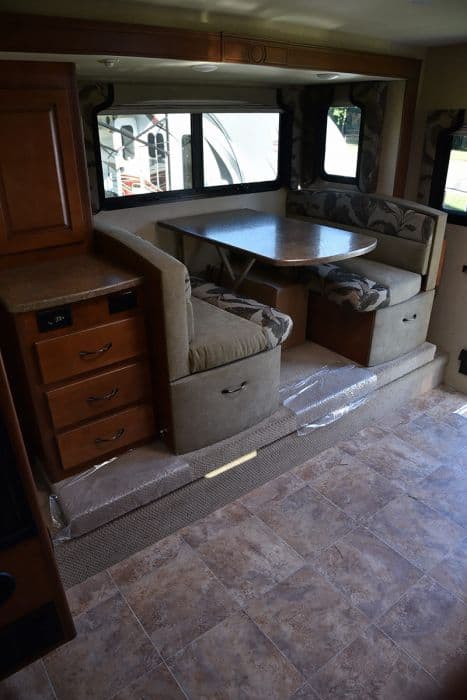 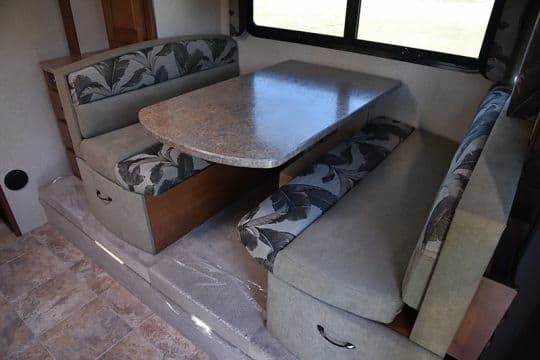 After years of talking with our readers, I can state that anything that makes truck campers more mobility-friendly is a big deal.  The lower step into the dinette is certainly welcome, but the lower climb into the cabover is really what folks are after.  I realize this is low on the “wow” meter, but we’re talking about helping folks to keep-on truck camping.  That’s a big wow in my book.

The 1062 cabover entry is not as low as a rail-height basement camper, but it’s better than it was, and doesn’t come with the increased weight and higher center of gravity disadvantages of a rail-height design.  Everything has its trade offs. 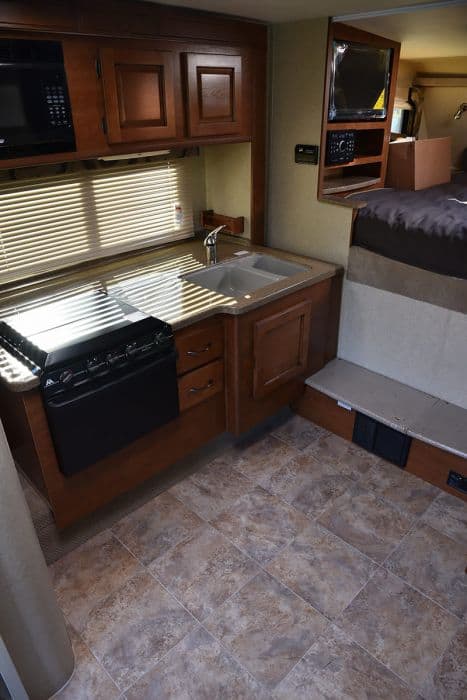 The bright sun would not allow us to properly photograph the larger kitchen window, but it was certainly bigger than the 1052 kitchen window allowing for more light to enter the camper.  You can almost see the bigger window behind the Venetian blinds.  It’s there, I swear!

The thermal-pane frameless torque windows Lance Campers is using for 2016 look fantastic.  Whether they provide adequate cross ventilation is something we need to verify down the road, but they certainly appeared to do the job. 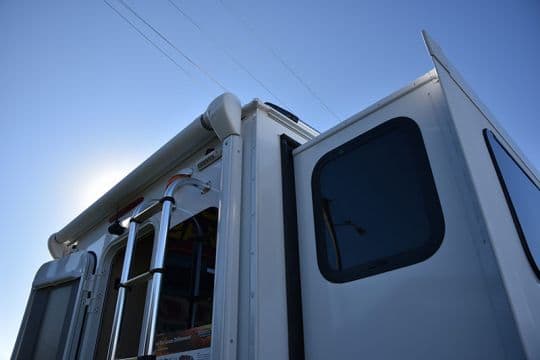 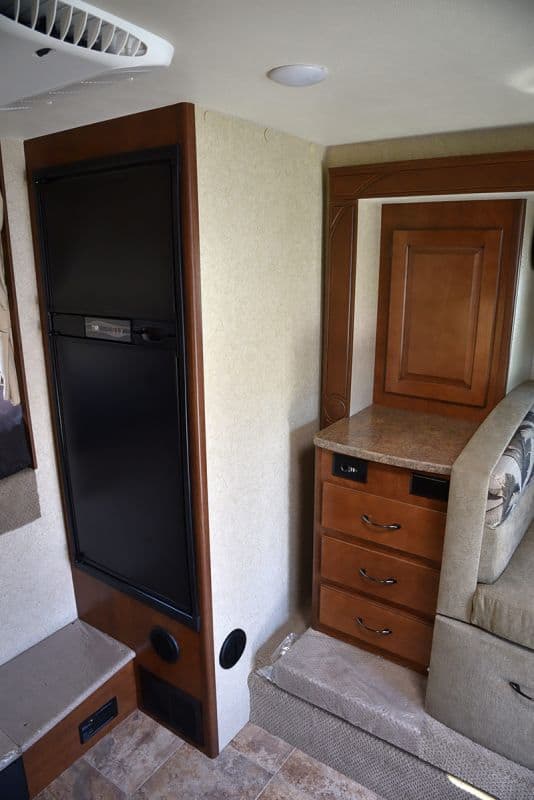 Looking at the floor plan, one might wonder why Lance didn’t just put the refrigerator on the slide and extend the passenger’s side to a full wall slide.  The reasons are three fold; weight, structural integrity, and noise. 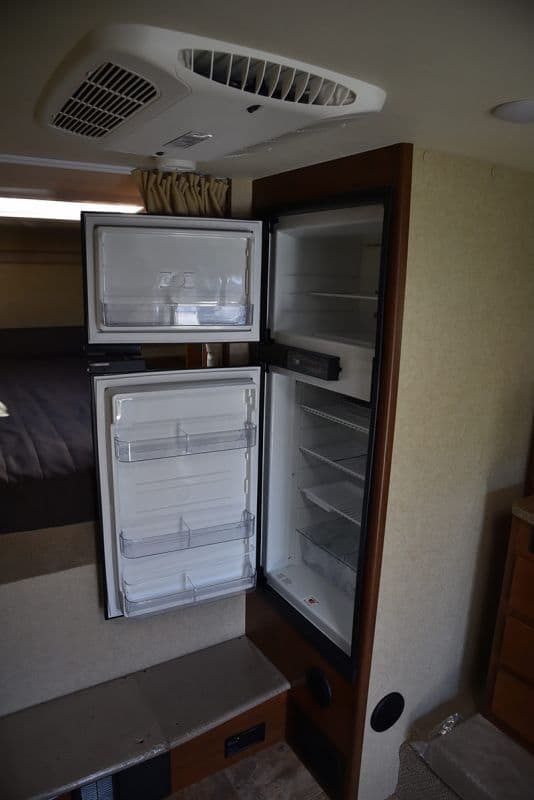 Extending the slide-out to the full wall would add a considerable amount of dry weight (upwards of 100 pounds or more) while decreasing the structural integrity of the camper.  Furthermore, putting a refrigerator on a slide means forgoing roof ventilation and adding an additional side vent with a fan.  Refrigerator fans are notoriously noisy in truck campers, especially for light sleepers. 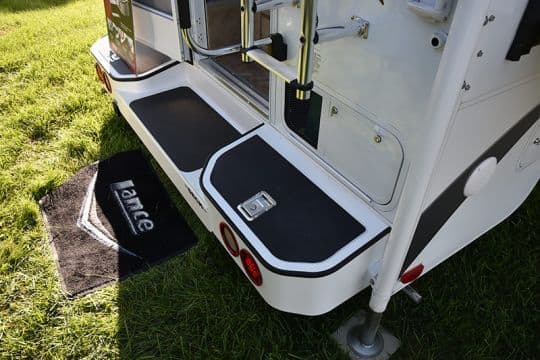 Above: The Lance Ultra Deck Plus by Torklift International is a popular option

So, is the 1062 worth of its new model number?  Honestly, who cares.  That’s a decision for the sales, marketing, and senior management at Lance Campers.  All we care about is whether the 1062 is a better truck camper than the outgoing 1052.  On that we have a decision.

Yes, the 1062 is certainly improved over the 1052.  With the list of tweaks and enhancements, the double-slide floor plan looks and feels much better in person.  I would even urge folks who liked but didn’t love the 1052 to give the 1062 a fresh look.  If nothing else, you will notice the unmistakably wide open interior.  Bring your dancing slippers.

For those who want a hard side, long bed, rear entry, dry bath, double-slide, and prize interior floor space above almost anything else, the 1062 is a must-see.  Folks with dogs would love the wide-open floor in the 1062.  For reasons my family has yet to comprehend, my sister bought a Greyhound last year (the dog, not the bus) and would need the 1062’s floor space for her lovely horse-sized dog, “Lady”.  Big dog people, the 1062 is calling.

Others may want the floor space because they’re coming out of a fifth wheel, motorhome, or another large RV.  Some may want this kind of real estate to do sit-ups and push-ups in the morning.  A few folks out there might like the social aspect of having lots of stand and talk room in their coach.  The 1062 is a very social feeling camper inside.

Having published a full review of a 2015 Lance 1052 last June, it’s unlikely that I will review the 1062.  What I will say is that I like the 1062 much more than the 1052.  For me, this goes beyond the taller basement and wider floor.  The original 1052 lacked something that I couldn’t quite put my finger on.  With the updates, the 1062 eliminates that hesitation and represents a more fully-realized Lance Camper.