Little Guy Worldwide announces an all-new rear bumper and a list of refinements for the 2016 Cirrus 800.  Don’t miss the extensive interior and exterior photography.

Above: The 2016 Cirrus 800 with red accent graphics – click to enlarge

Where the first Cirrus campers featured lime-green exterior accent graphics, the 2016 Cirrus 800 campers at the 2015 Elkhart Open House were blue and red.  The red really caught our attention as the Indiana sun fell below the horizon.  Cirrus campers look truly incredible in person.

Above: The 2016 Cirrus 800 with blue accent graphics – click to enlarge

Above: The new Cirrus aluminum rear bumper – click to enlarge

The most significant change to the Cirrus campers on display at the 2015 Elkhart Open House was the new and totally resigned rear bumper.  Where the old bumper was TPO (thermoplastic olefin), the new bumper is aluminum.  We certainly appreciated the durability of the aluminum, and the comfort of the entry steps.

Another detail we discovered at Elkhart is the new outside shower.  Unlike traditional outside showers, it’s contained in a narrow tube taking up less exterior space and presenting less perimeter to caulk and seal. 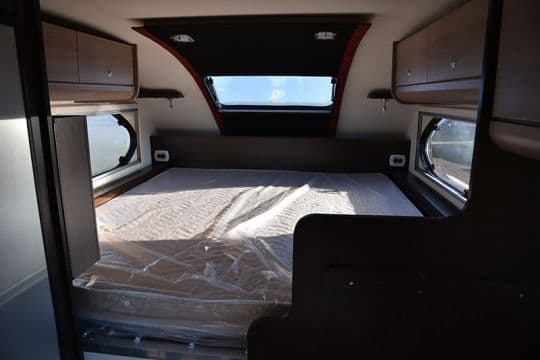 The interior of the 2016 Cirrus 800 is where the forward thinking design really kicks in.  The Italian cabinetry, solid surface counters, LED lighting fixtures, and other European-sourced components and materials are nothing less than a vision of where truck camper interior design could be headed.

With its unique fold-down sink, the wet bath in the 2016 Cirrus 800 is a knockout with a level of form, function, and beauty on display rarely seen in truck camper design.

The shower fixture looks like something out of an architecture magazine.  The fold-down sink is pure genius and something truck camper owners have been asking for since the Nixon administration (or so I have been told).  On the downside, wet bath storage is lacking.

The fold-down sink offers a space to place toothbrushes, soap, and a glass of water.  The faucet also folds-down.  The sink basin size is quite generous.  In fact, it’s as least as big as most residential sink basins.

It will be interesting to see if more manufacturers explore the fold-down sink concept for their wet baths in the coming years.  It makes sense, but we want to try it out during a real camping experience before we give it the formal TCM stamp of approval.

The Cirrus 800 kitchen is simple, straight forward, and elegant.  Oven lovers will be heartbroken, but most of us will be fine with only a propane cook top.  The flush glass top covers for the sink and cook top give the kitchen a clean and modern aesthetic.

Like the bathroom, storage is the main challenge.  Owners of the Cirrus 800 will need to be very clever and efficient about where they store pots, pans, dishes, and silverware. 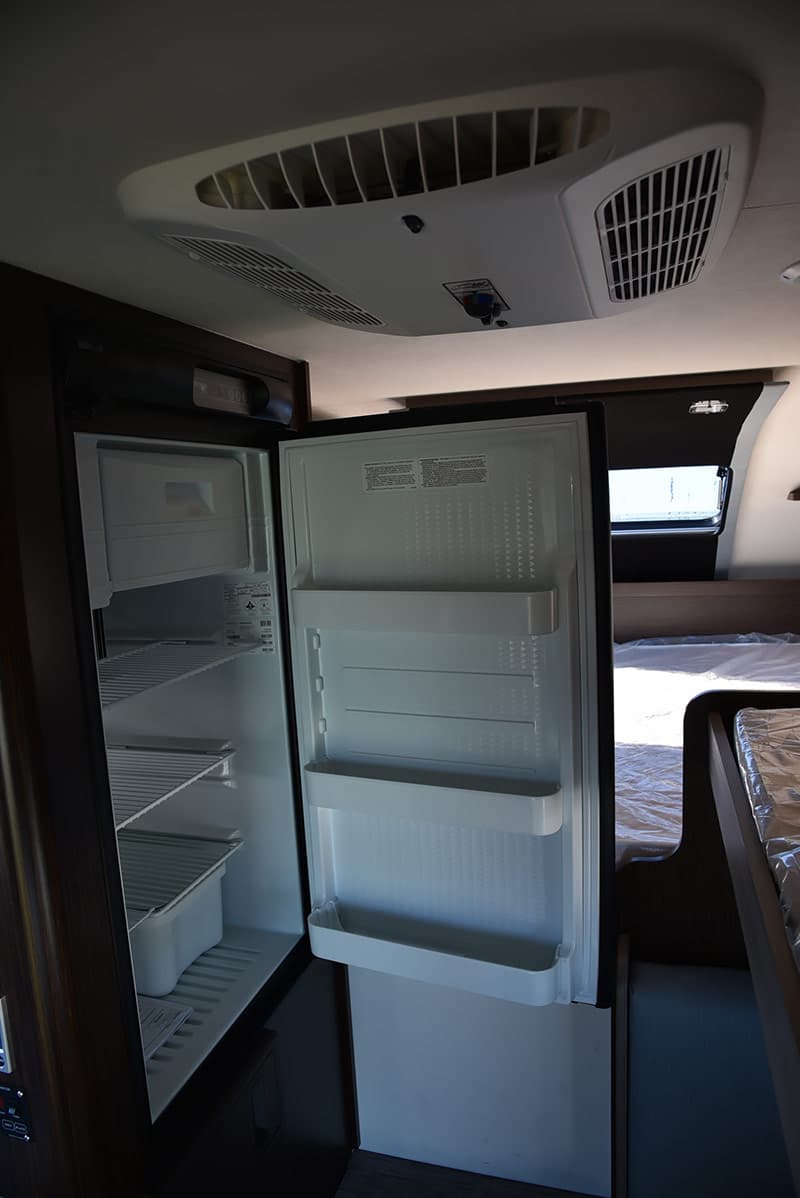 The 5.5 cubic foot refrigerator offers plenty of food storage for two people going camping for a week.  We know this because we have camped for a week as a couple with exactly the same size refrigerator.  The only limitation is how much beer you can keep cold.  Again, be clever and efficient, and you will survive.  Also note the 9200 BTU Coleman Mach 8 air conditioner, the same exact model we installed on our project camper. 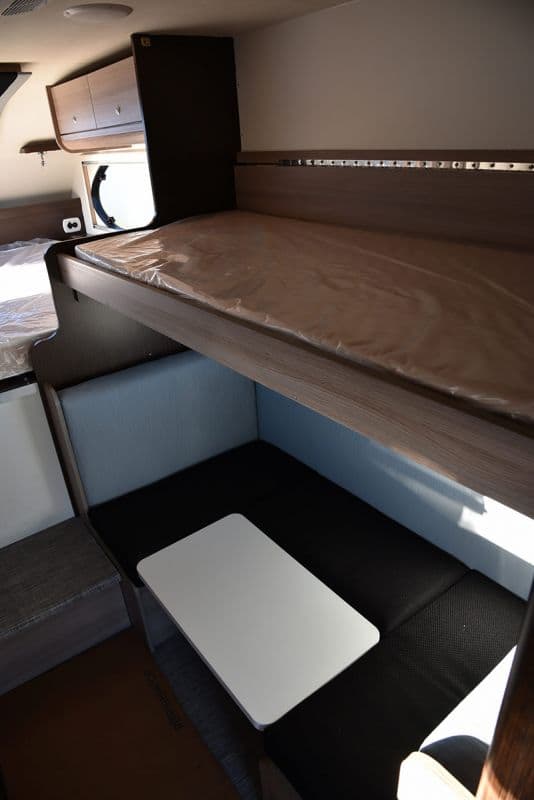 Above: The 2016 Cirrus 800 dinette in blue with overhead bunk in the down position 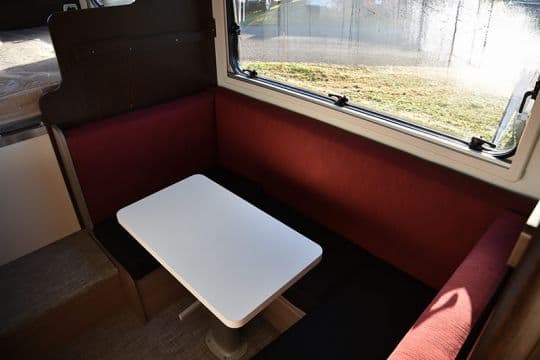 Above: The overhead dinette bunk folded up (above) and down (below) 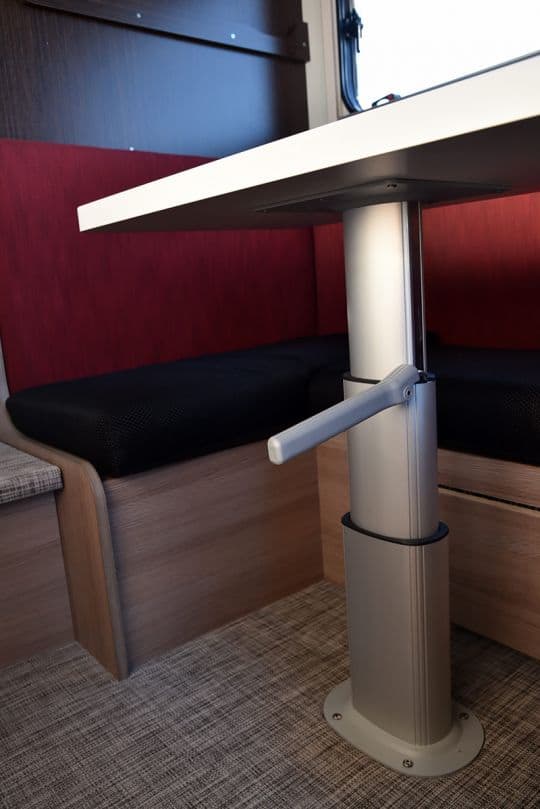 Above: The Lagun dinette table leg

If a dinette table leg could be judged on looks alone, the Lagun is a shoe-in.  Imagine if Apple Computers made a table leg, and you get an idea of how modern and awesome this system is.  When we get our hands on a Cirrus 800 to demo, we will put this system through its paces and make sure it’s just not another pretty leg.

Left to right: Euro-style LED lighting, 12-volt and USB in the cabover, and the HDTV entertainment system – click to enlarge

The 2016 Cirrus 800 is loaded with technology including a unique swing-out HDTV entertainment system viewable from the cabover, dinette, and kitchen, European-styled LED lighting, and dual 12-volt and USB chargers on both sides of the bed. 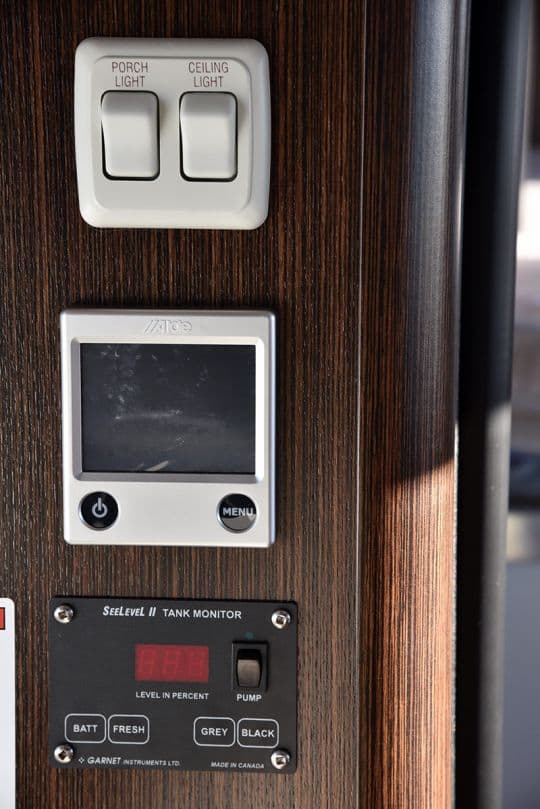 Above: The Alde and SeeLevel panels

More tech can be found in the heating and monitoring systems employed in the 2016 Cirrus 800.  Here you see the Alde (pronounced All-Duh) integrated hot water and heater system panel above the SeeLevel II tank monitor system.

Both are state-of-the-art systems that push beyond the technology commonly found in traditional RVs.  Again, we can’t wait to put these elements through a “see” trial.  We “Alde” know then if they’re as exciting as they seem.

That’s all we will say about the 2016 Cirrus 800 until we get one for a review.  The big question will be how all these new features, appliances, and design elements work for actual camping.  What we see is very promising, but we want to camp with the Alde system, try out that beautiful wet bath shower, and, you know, actually camp in one!

So far, color us impressed, especially in red.

For more information on Cirrus Campers, visit their website at cirrus-truckcamper.com.