At its core, Truck Camper Magazine is a community.  Yes, TCM is also several billion clusters of electrons on your laptop, phone and tablet, but the real meaning behind this project is in the human to human connections it creates.  Through the magazine we have met many of you over the years and cannot begin to explain how wonderful that experience has been.

One way the magazine connects our community is through reader feedback and interaction on specific truck camper topics.  Through Question of the Week, destination articles, surveys, polls, mod contests and even the calendar contest, Truck Camper Magazine has become something of a hub for our shared passion of truck camping and everything it represents.

Need a little inspiration for where to go, what to do, or how to make your truck camping experience better?  Thanks to everyone in our vibrant community, it’s here.

Speaking of here, here’s a fun example of exactly what we’re talking about.  Bill and Kira Jones went to the Royal Tyrrell Museum of Paleontology after reading the responses to a Question of the Week about favorite museums.

Hey John Desjardins, look at what you inspired two years ago! 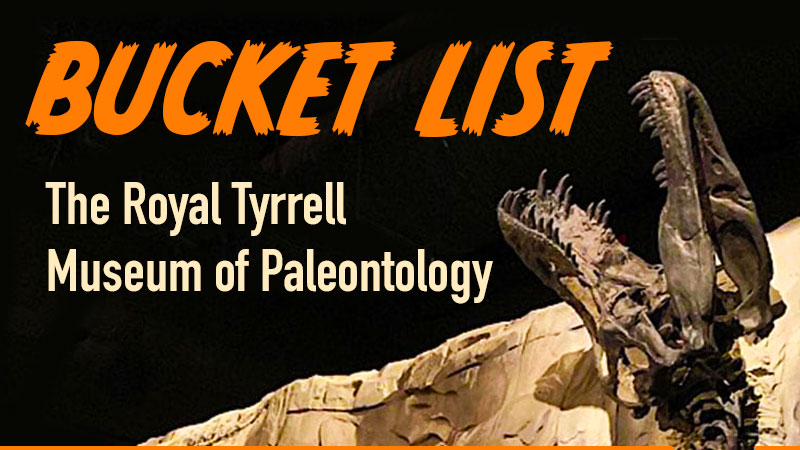 The Royal Tyrrell Museum of Paleontology

by Bill and Kira Jones

Truck Camper Magazine reader, John Desjardins, mentioned the Royal Tyrrell Museum in the Favorite Museum Question of the Week response posted on July 6, 2017.  John’s response further prompted us to visit this fantastic museum.  In my career, I had worked with many geologists and a few paleontologists.  They all spoke of the museum often and gave it high praise.

In early June we traveled to Drumheller, Alberta specifically to go to the Royal Tyrrell Museum of Paleontology.  We had wanted to go to this museum for quite a while, but it was quite the distance to get there.

Several unique regional specimens are presented. Displays primarily focus on the Cambrian period from about 541-million years ago ranging to the quaternary period.  Kira was enthralled with the Burgess Shale exhibit that presented soft-shelled marine life from about 508-million years ago.

We have read that the huge parking and overflow lots get completely filled sometimes.  The museum was well attended the day we went.  Any more people and it would have been too much chaos.  Per a museum schedule of events we saw, it looks like things really get going with crowds in late June.

There are plenty of camping and RV facilities in the area of every type from primitive to full hookups.  The local area has also capitalized on the dinosaur trade.  There are large outdoor dinosaur models and a $1.07-million dollar CAD Tyrannosaurus Rex tower.  Just think Roswell, New Mexico and replace aliens with dinosaurs and you’ll get the idea.

Here are some examples of what’s in the museum: 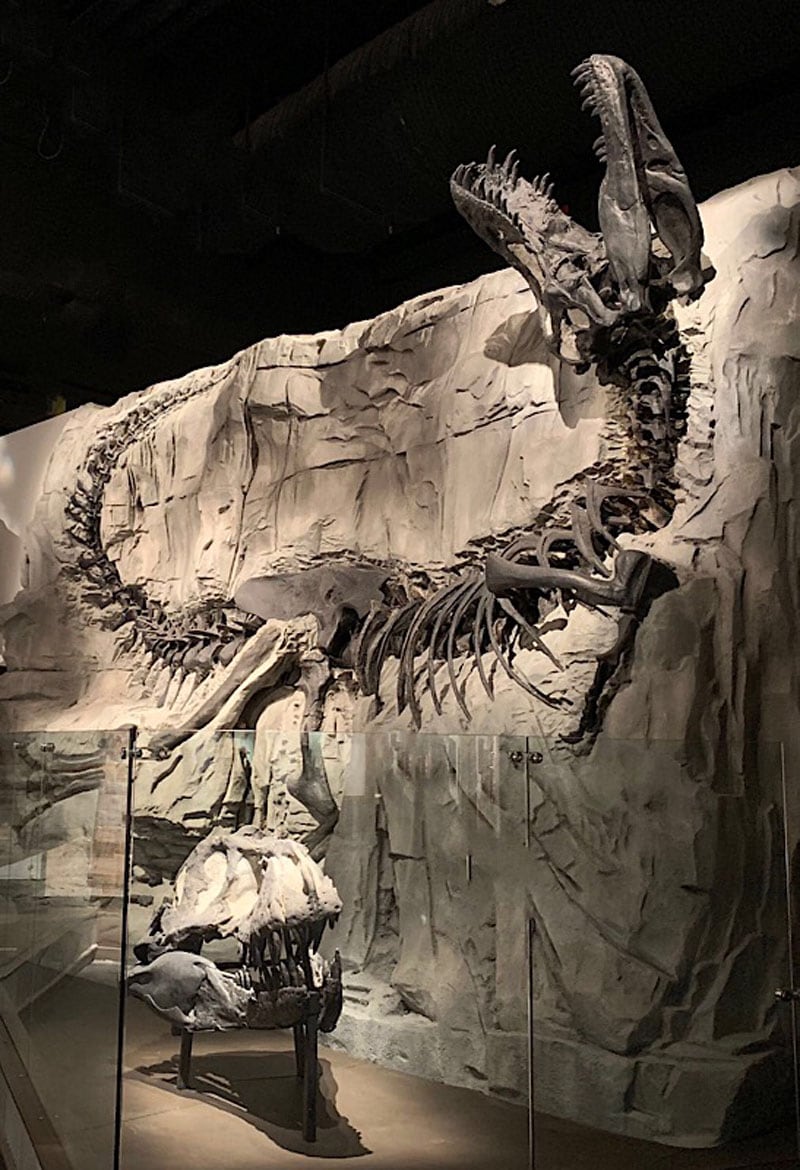 Above: Black Beauty, a Tyrannosaurus Rex

Above: Ornitholestes sp. (about 6-feet long).  I think that it might make a nice pet, but would expensive to feed. 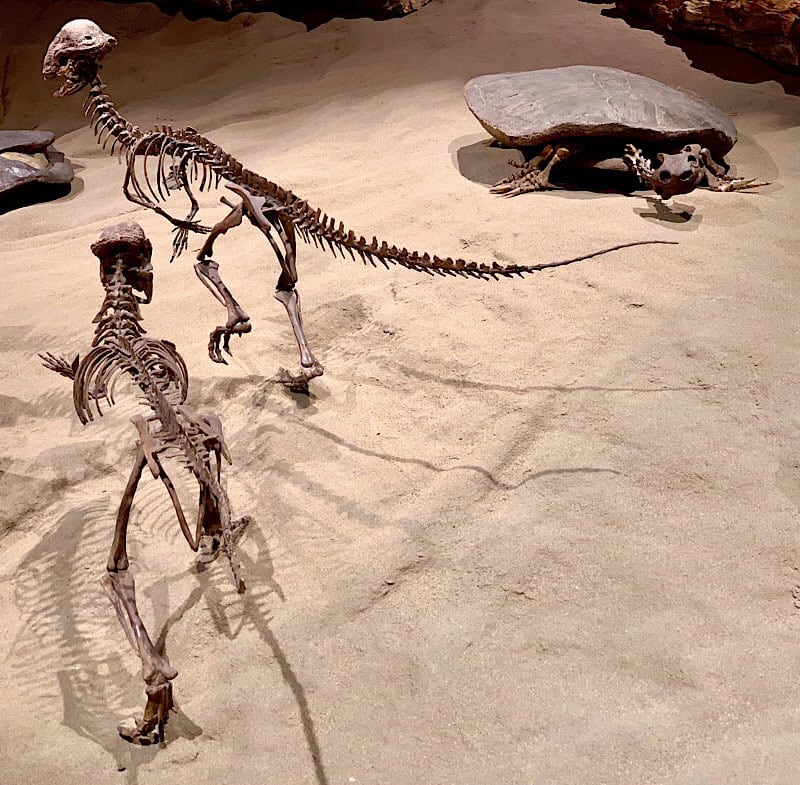 Above: Stegoceras sp. and a Basilemys sp. (turtle relative) 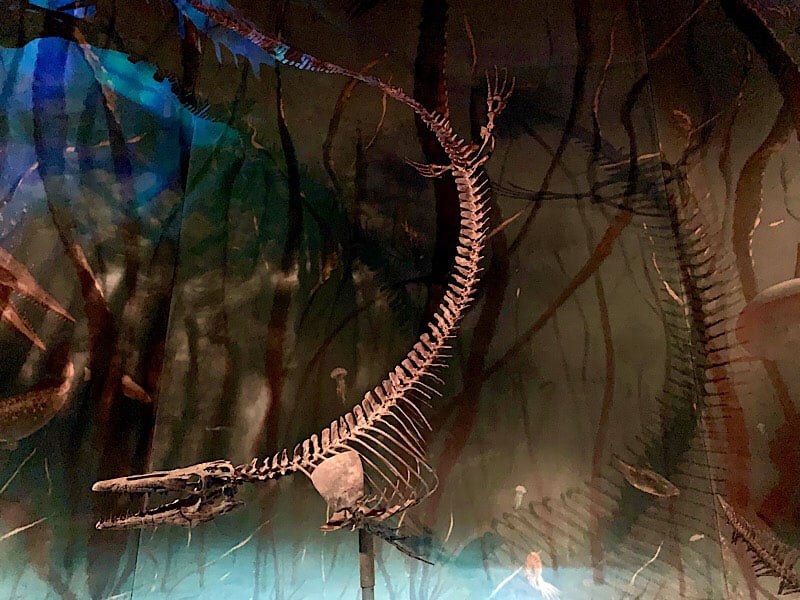 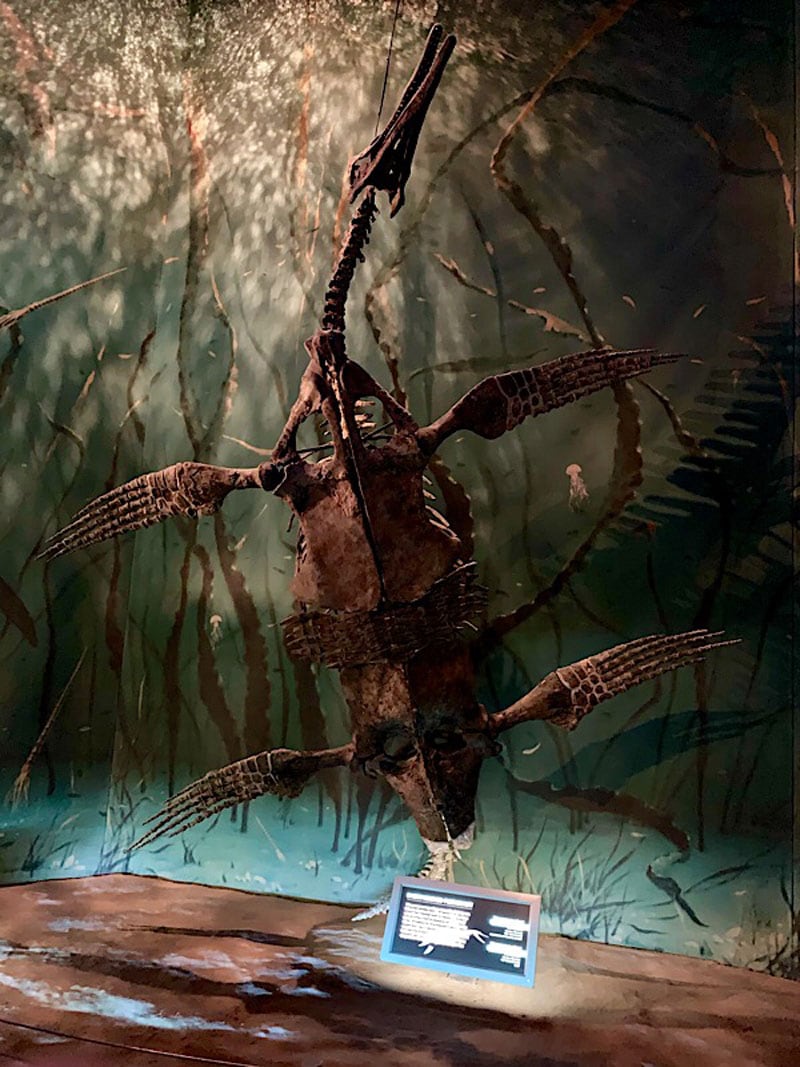 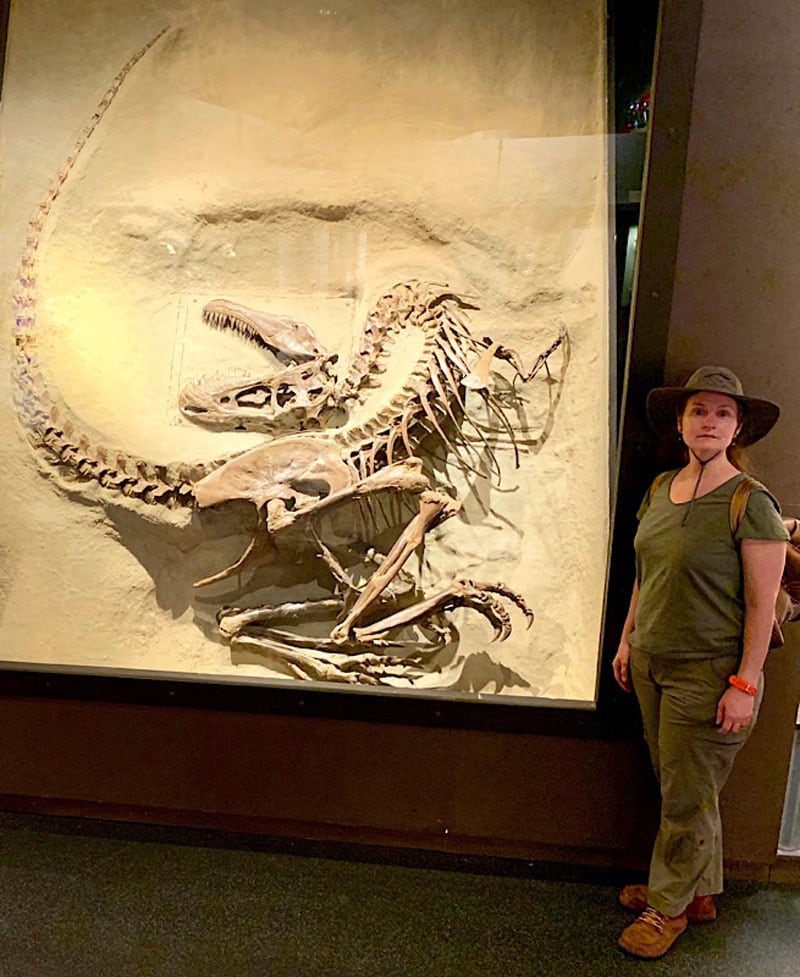 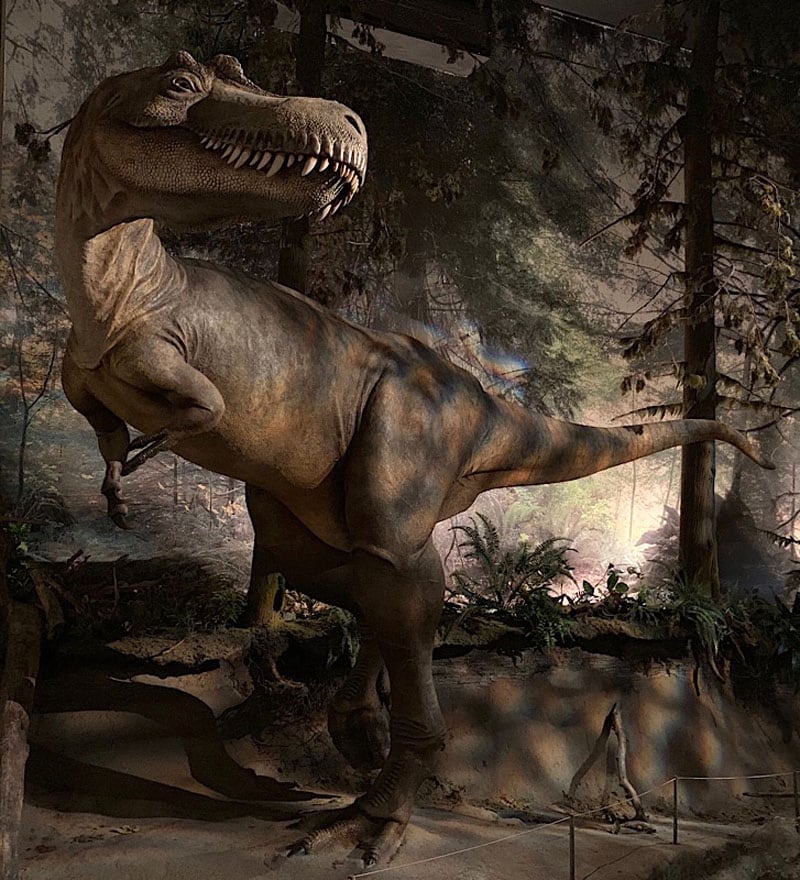 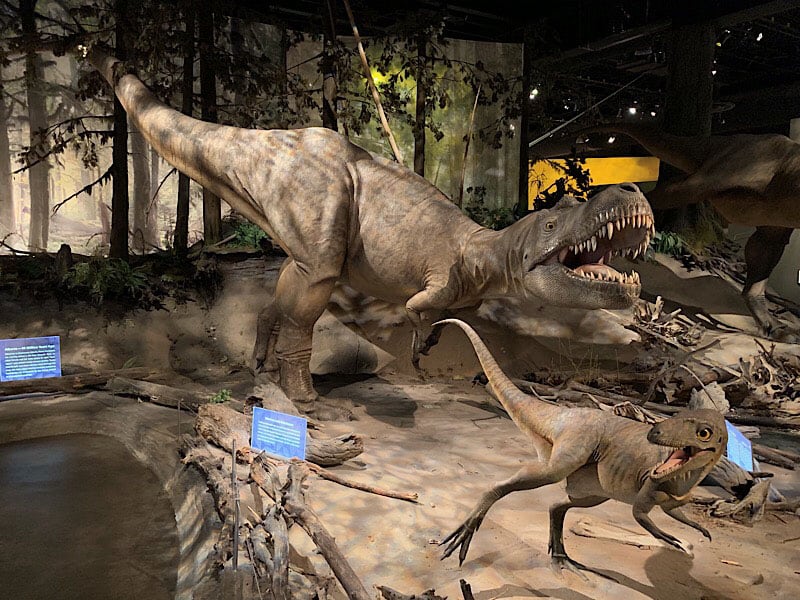 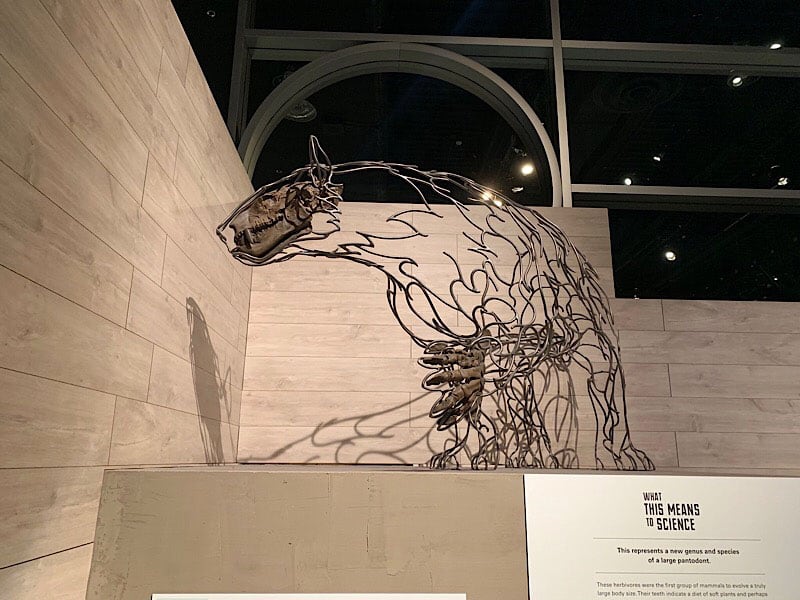 The best part of the museum, in our mutual opinion, is that some displays are presented partially excavated and prepared as they were found, and some are the fully posed skeletons.  A few partial skeletons are encased in an artist’s metal sculpture depicting the 3D body.

Without a doubt, the museum was it was well worth the drive.  Highly recommended.