Welcome to the first entry in June’s Mega Mod Contest.  One Mega Mod will be published in every Email Alert in June.  At the end of the month, we’ll hold a reader vote to determine June’s winner.  Click here for information about the 2021 Mod Contest, including how to enter. 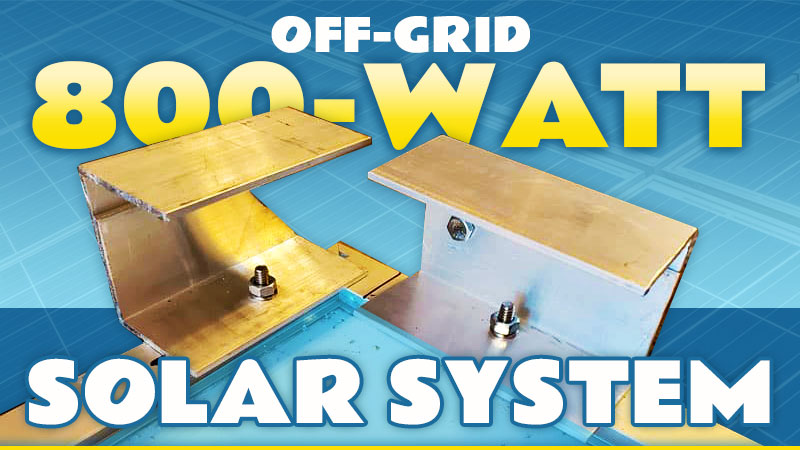 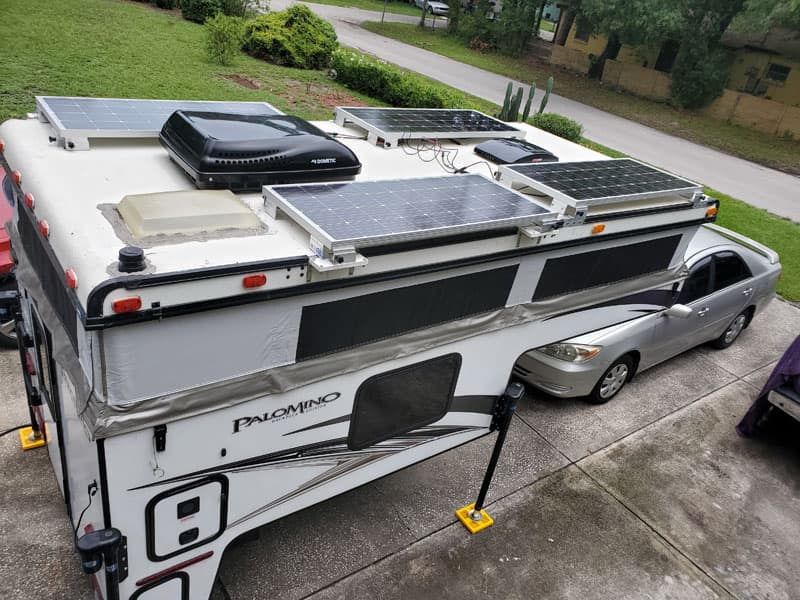 I wanted to extend my time off-grid before needing to refill my two 20-pound propane tanks.  With more solar, I would not need to use propane for the stove or oven because I could use a microwave and hot plate instead.  I would also be able to use the MaxxAir fan, lights, and coffee maker without worry.

My tiny Dometic refrigerator operates best on propane.  This mod makes it so that the sole usage of propane is the refrigerator.  This gives me four to six-weeks on the two tanks.  I just did a month-long trip and returned with over half of one propane tank still remaining.

After much research, YouTube time, and two books, I decided on the components for my system.  I chose four 200-watt mono-crystalline solar panels for maximizing my sparse roof dimensions and weight restrictions.  My pop-up roof needs to be raised so I had to be aware of the weight.

The solar panels required an 80-amp solar controller.  The EPEver had the best reviews.  I decided on 100ah Lithium-Ion batteries for the best power provision and their 10-year warranty.  I made room for four of them. 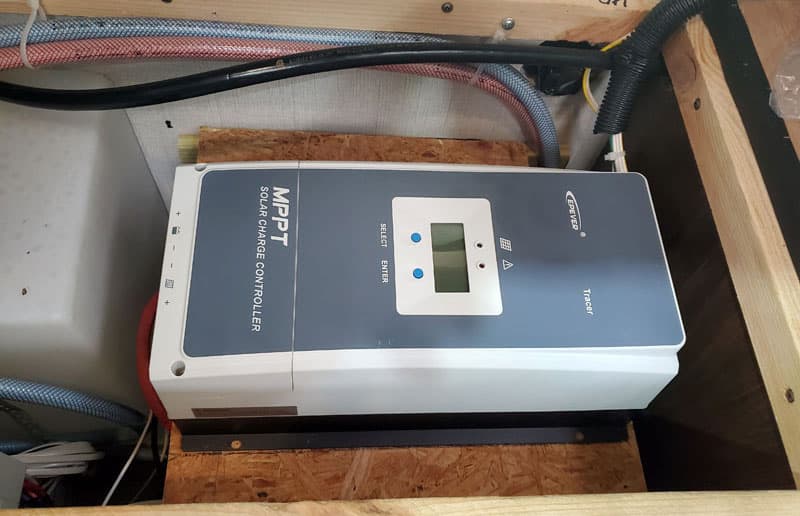 I added a 3000-watt pure sine inverter, an automatic transfer switch, and monitors on the inside and outside of the controller as well as a Bluetooth battery monitor.  There are appropriate wattage circuit breakers on all circuits for protection.  I used 8-AWG PV wire from the panels to the controller.  I used 4-AWG welding cable between the four batteries.  I used 2/0 welding cable for power to the inverter. 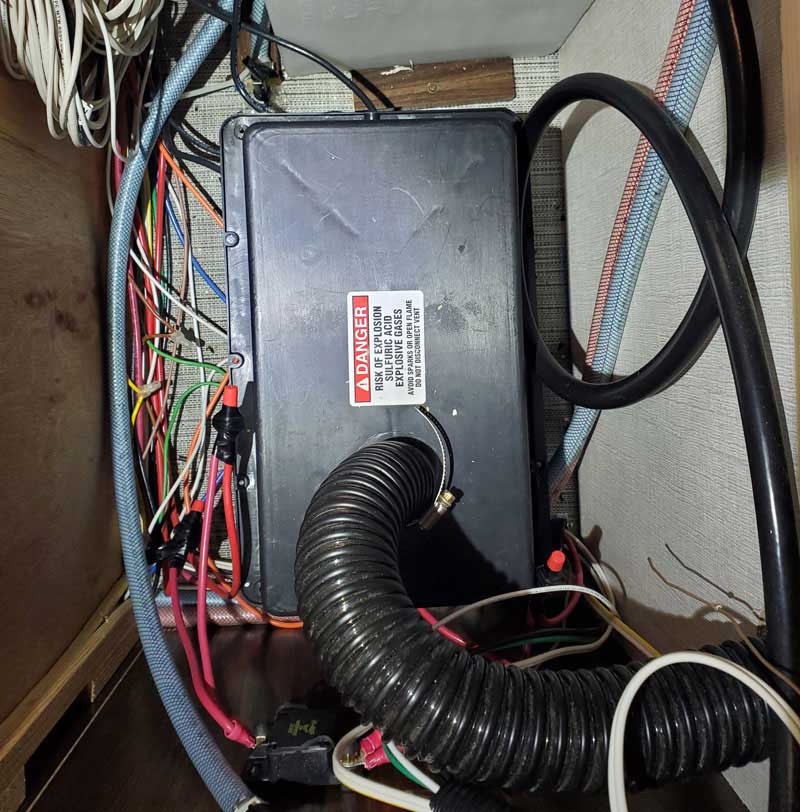 I had to remove the one Group 31 lead-acid battery to provide room for two of the Lithium-Ion batteries, plus space for the controller. 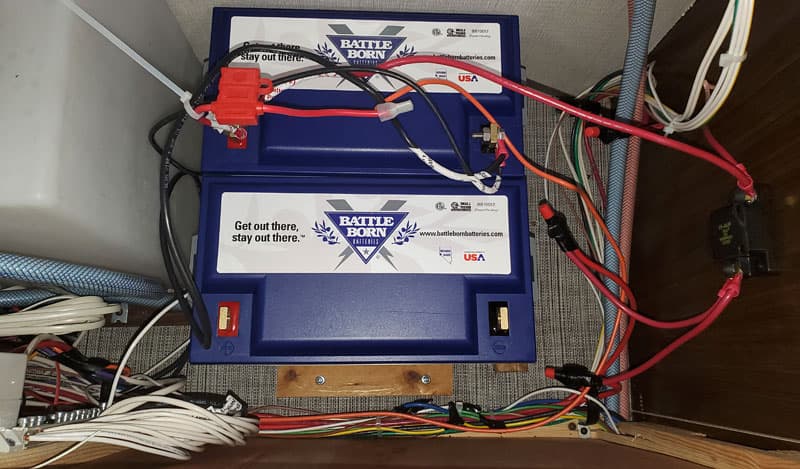 I made space and a case for the other two Lithium-Ion batteries as well as the inverter plus transfer switch. 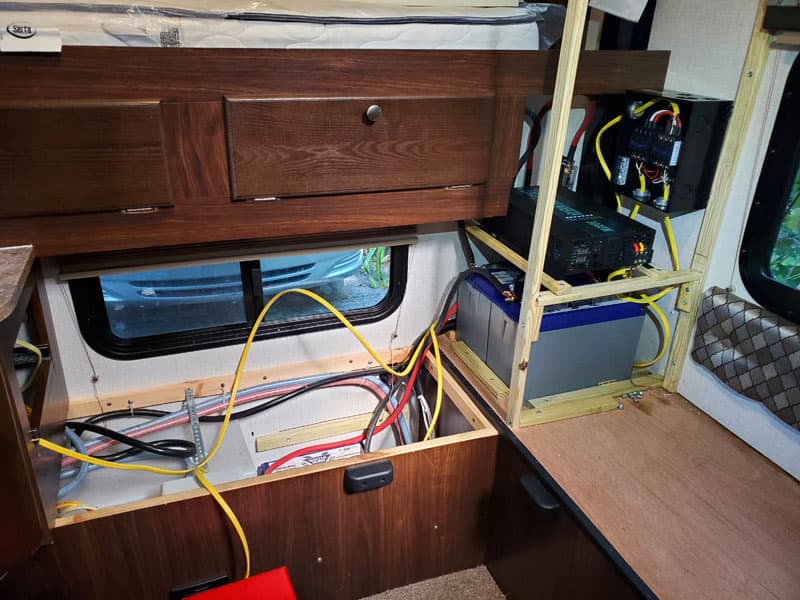 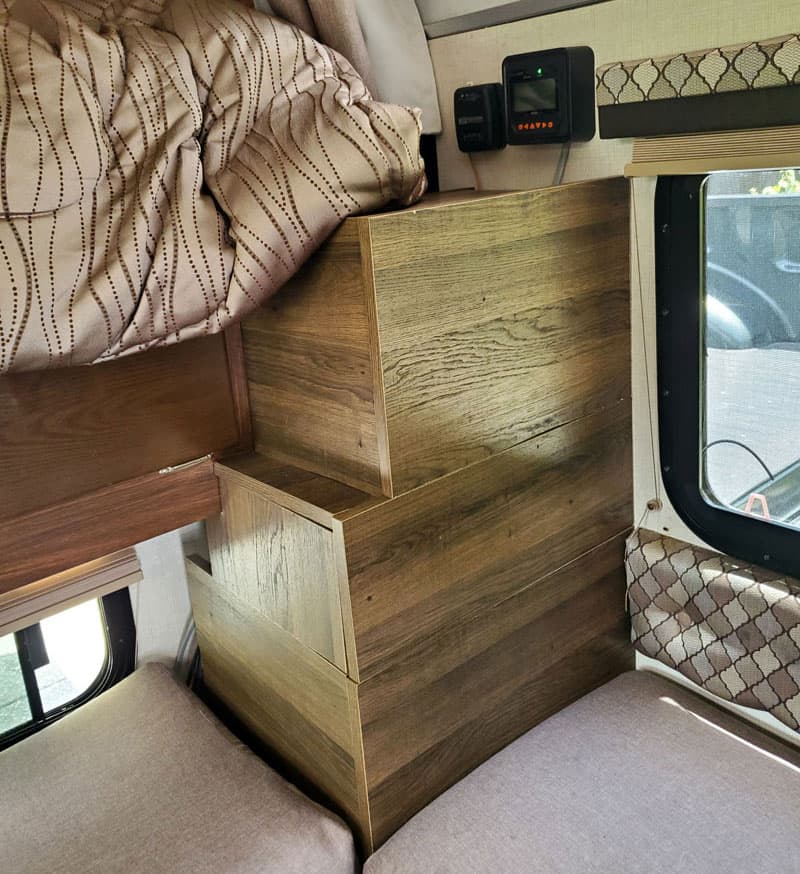 For the Bluetooth battery monitor, I needed to make my own ground buss bar to hook up all the grounds in the camper.  I used a copper bar and adapted it by drilling holes and stainless steel bolts. 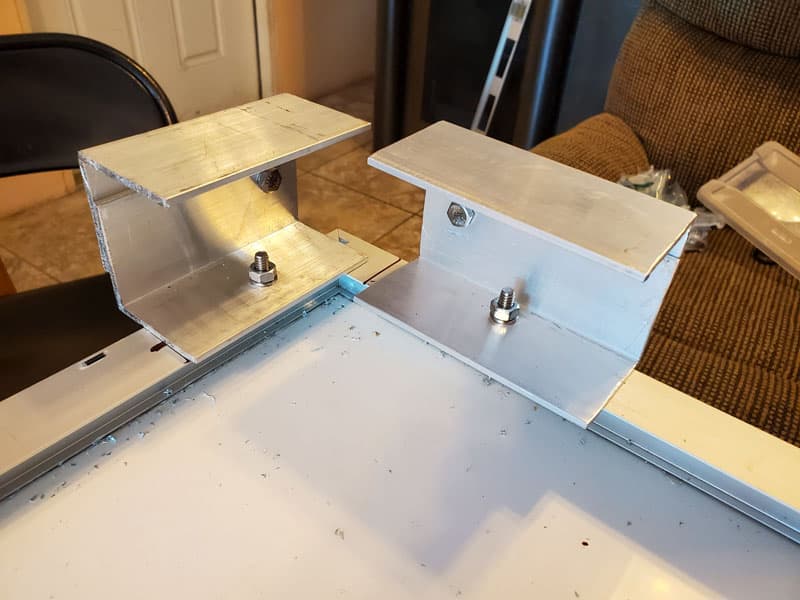 I made my own mounts for the panels from a 2-inch aluminum angle bar.  I wanted them to tilt on all four axis, so this required me to cut 64 pieces and drill mounting holes.  I used stainless steel bolts and knurled knobs for retainers which worked just fine.  For the best safety, energy provision, and retention, I over-engineered everything for this system.

This mod has been absolutely magnificent.  I spent the month of July primarily in Virginia in the George Washington and Thomas Jefferson National Forests.  I went 24-days on the first tank of propane.  I changed at the top of the red zone to ensure the best refrigerator pressure.

Because of all the solar, I was able to use my K-cup coffee maker for coffee, my dual electric hot plate for cooking, and my microwave for some things like making hot water for cocoa while I was off-grid.

On that trip, the MaxxAir fan never stopped running.  All of the components performed flawlessly.  This amazed me since there was a certain amount of complexity involved in designing and melding all the pieces into a functioning system.  It also works great sitting in the driveway.  After this modification, I have put 3,229-miles on the camper.

The 100ah Lithium-Ion batteries are from Battle Born and cost about $960 each.  The 3000-watt pure sine inverter was bought on eBay for $300 and the automatic transfer switch is 30-amps and from Furrion for $120.  The MT 50 monitors were from eBay.

I had to get five 8-foot lengths of 2-inch by 1/8-inch at $50 per length and seventy-five 1/4-inch by 1-inch stainless steel bolts from Home Depot.  From Camping World I bought 1.5-inch, 30-foot VHB tape as well as furring strips and shelving boards from Lowes.

I have no real idea how long it took, but I’m guessing hundreds of hours to complete this modification during a four month time span.  It cost me approximately $6,000.  In my opinion, the skill level of this modification is extremely hard.  I have many years of acquiring the necessary skills and tools.