Welcome to the second entry in January’s Medium Mod Contest.  One Medium Mod will be published in every Email Alert in January.  At the end of the month, we’ll hold a reader vote to determine January’s winner.  Click here for information about the 2023 Mod Contest, including how to enter. 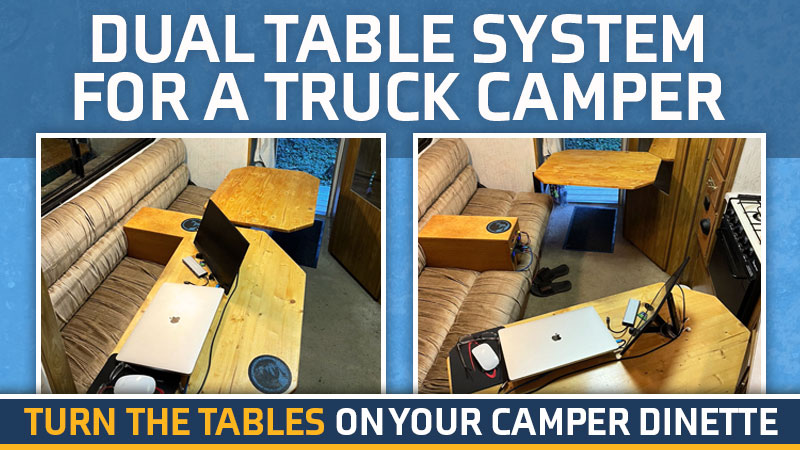 When I got my camper, the table was a cheap piece of plywood supported by a single post. Obviously, the original table had died at some point in its 30-year history.

I made a new top, but the single support just didn’t work for me. It tipped so badly. It was like being on a boat on high seas. It screamed loud enough to make your ears bleed when you turned it, and it crowded the floor space of the camper terribly forcing us into the “traffic game dance” we’ve all come to know and love.

Another difficulty is with the camper itself. I don’t have a dinette; just a couch that can be folded out. Using the table meant sitting at an angle with one knee up on the couch. I could do that for maybe fifteen minutes when I was sixteen, but that was it.

I spent months looking at the situation. I thought about Lagun systems, but they weren’t quite right for me and I didn’t want to spend the money on something I didn’t know would work (and I’m cheap to the bone). One day, I happened across, “A Guy, a Girl, and a Campervan” on YouTube, and the video of the table he had made. This was the first light bulb.

Immediately, I started sketching on my tablet, bending wire, and using a pipe to mock up a plan. I wanted something that would fit my laptop and external monitor, and be easy to get in and out of for coffee input and output.

At this point, I had already built my first laptop brick and read a mod on TCM about installing two recliners, it finally dawned on me to stop thinking about one table, and start thinking about two. Second light bulb.

Yet, a third issue was sitting down behind the table. Since the couch is high, you have to do that butt skooch that twists your pants 90-degrees and gives you a truly strange wedgie. After the very first time hopping up to make things right and dumping your coffee all over your laptop, you learn to never do that move again. So I wanted something that got completely out of the way when sitting down. Nothing mounted in the center of the couch would work, but then I noticed that the couch had a support post at each end. Hmmm. Third light bulb and I had a plan! 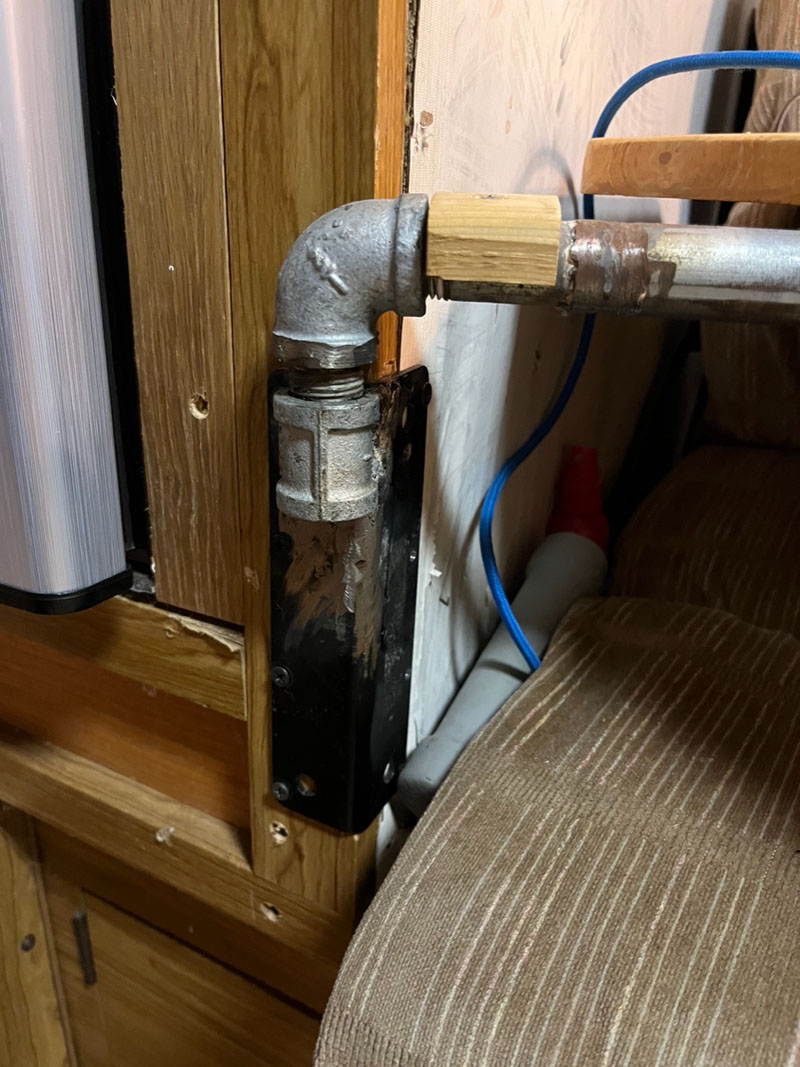 It’s insanely easy and cheap, once I figured it out. It started with a piece of angle iron screwed into the posts by the refrigerator and the propane closet at either end of the couch. To that, I welded a 3/4-inch pipe coupler. The welders out there will see the galvanized pipe and roll their eyes (and cringe) but, believe me, I welded outside and made darn sure I was upwind. I’m not really bright, but I’m not STOOPID (don’t say it! Not a word!) That said, now that I know the system works, I would have purchased a different pipe. For the $10 difference, it’s the way to go.

Into that coupler, I screwed a short nipple, and onto that a 90. Into that, I screwed in a longer piece of pipe. I cut and welded this a few times to get the swing just right. If I had to build it again, I would have used two couplers and a short nipple on the angle iron to make getting the correct angle easier. 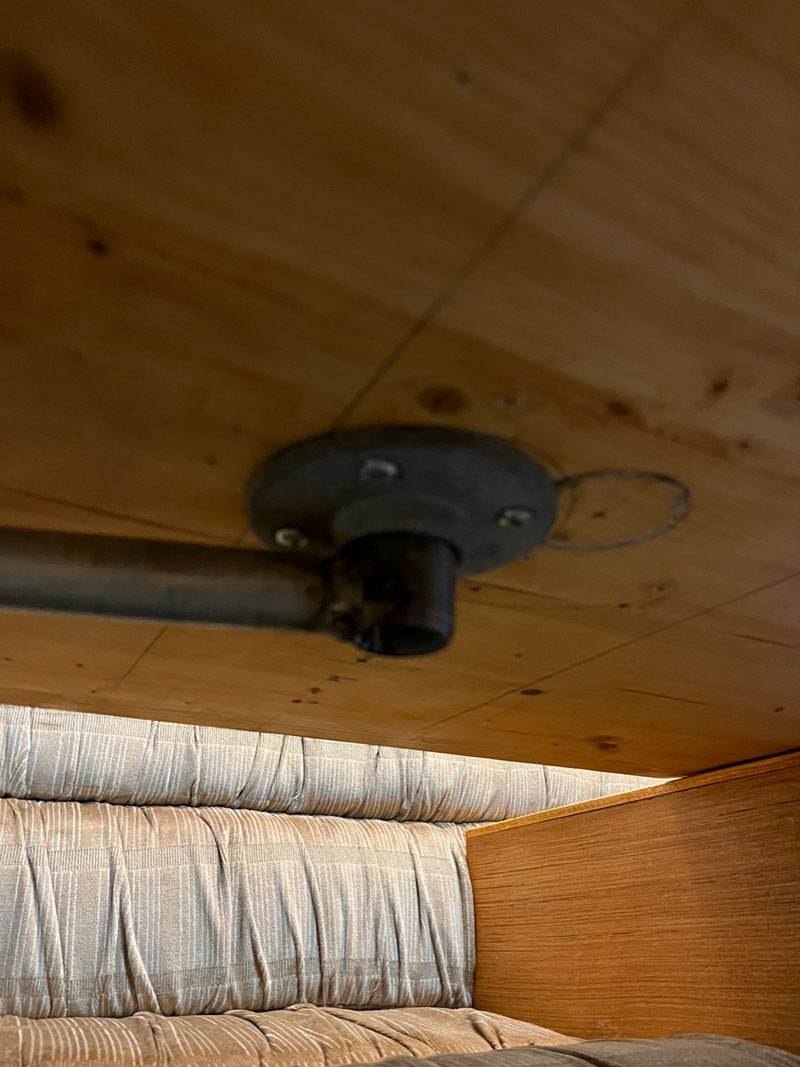 At the end of that pipe, I welded a short 1-inch coupler at 90 degrees. I didn’t use a 90-degree fitting because I wanted the distance from the pipe arm to the table to be as small as possible. Nobody likes bashed-up knees (or am I alone in that?). Onto that nipple, I screwed on a flange plate to mount to the table. I made it almost tight so the table will turn, but not be floppy. 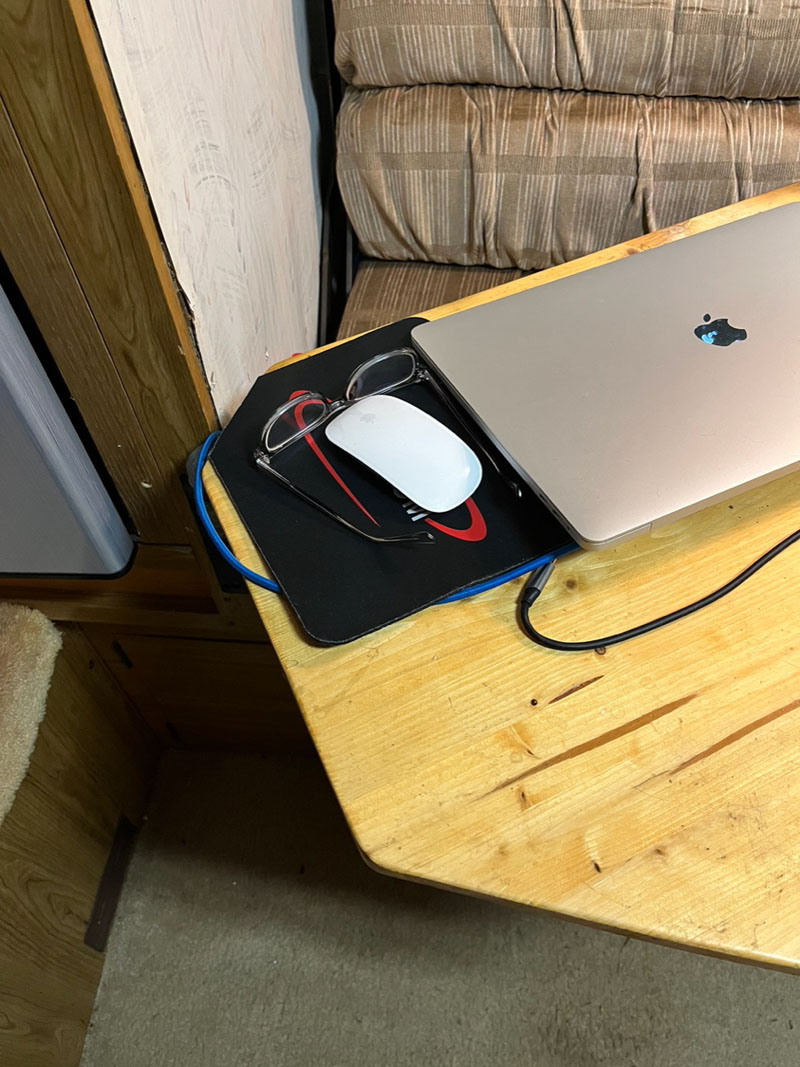 After using it for a year, I can tell you it just doesn’t matter that much. At some point, I may want to tighten it up a quarter turn, but maybe not. 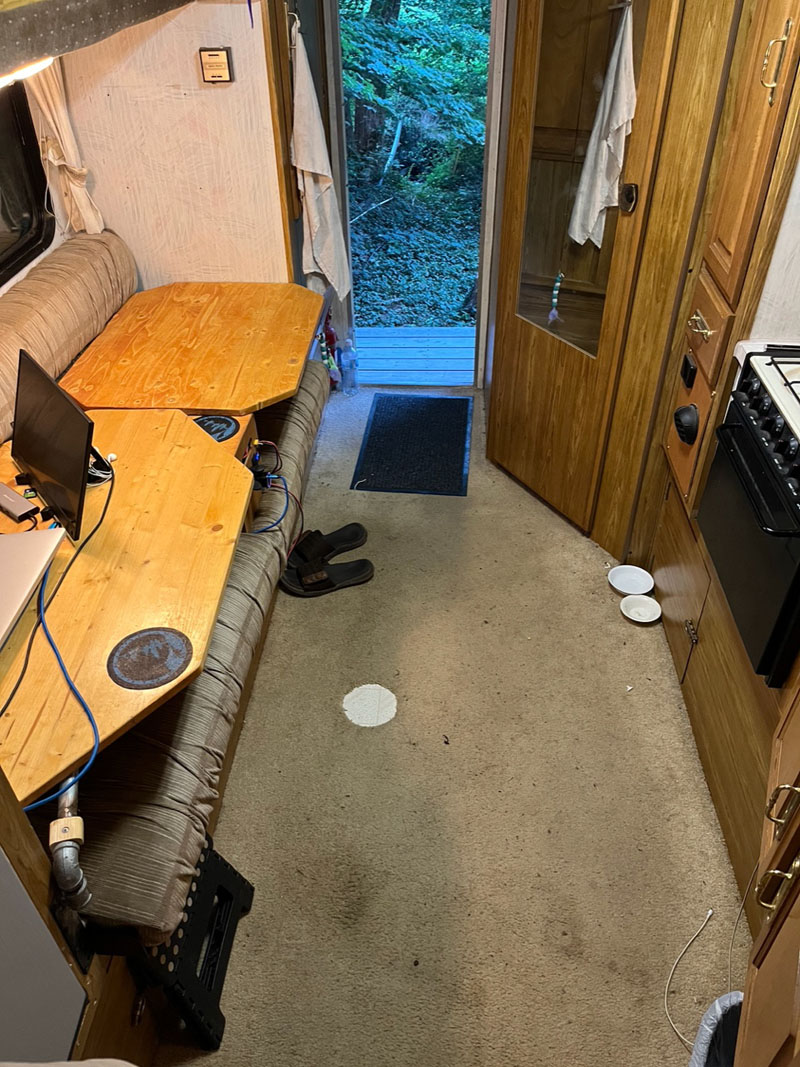 Sometimes, you make a mod, and it works – sorta. Like, “Okay, it’s better, but not perfect”. Sometimes that’s due to financial limits, skill levels, or poor planning. I’ve fallen victim to all of those. 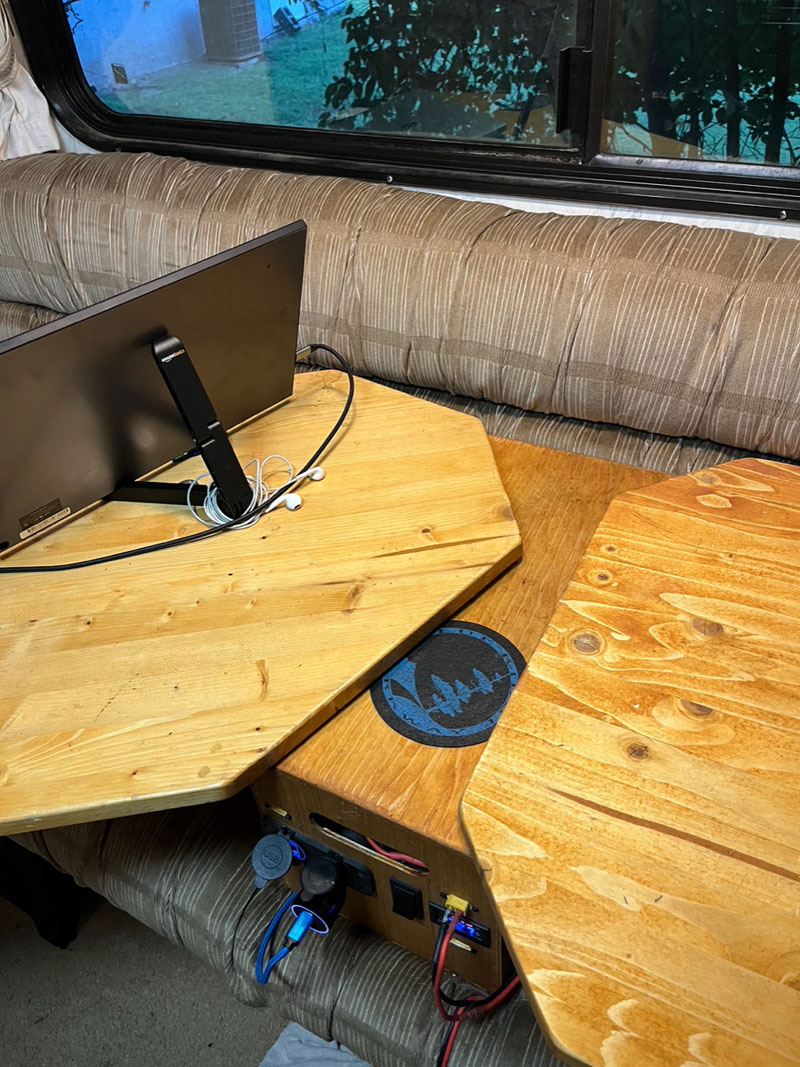 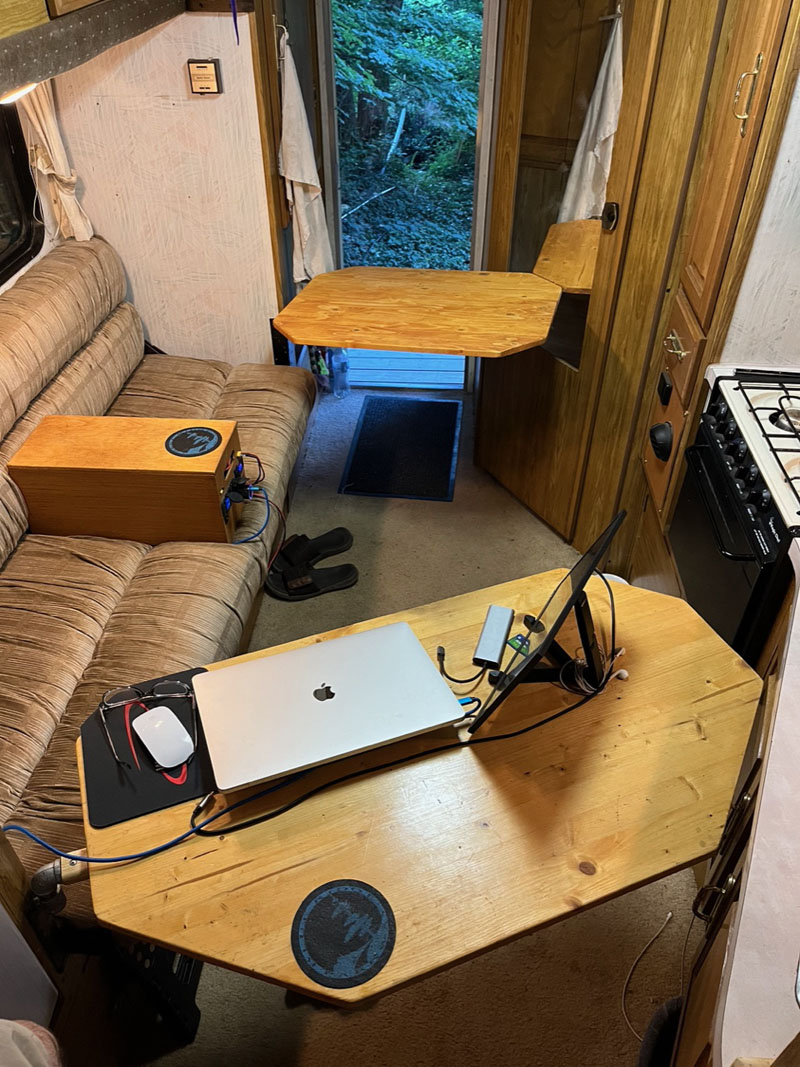 But this? To this day, I’m absolutely blown away by the difference it makes. What started out as a way to get a decent desk has completely transformed how I/we use the camper. No more traffic dance. No more sore backs/legs from being forced to sit in a corner. No more weird wedgies. 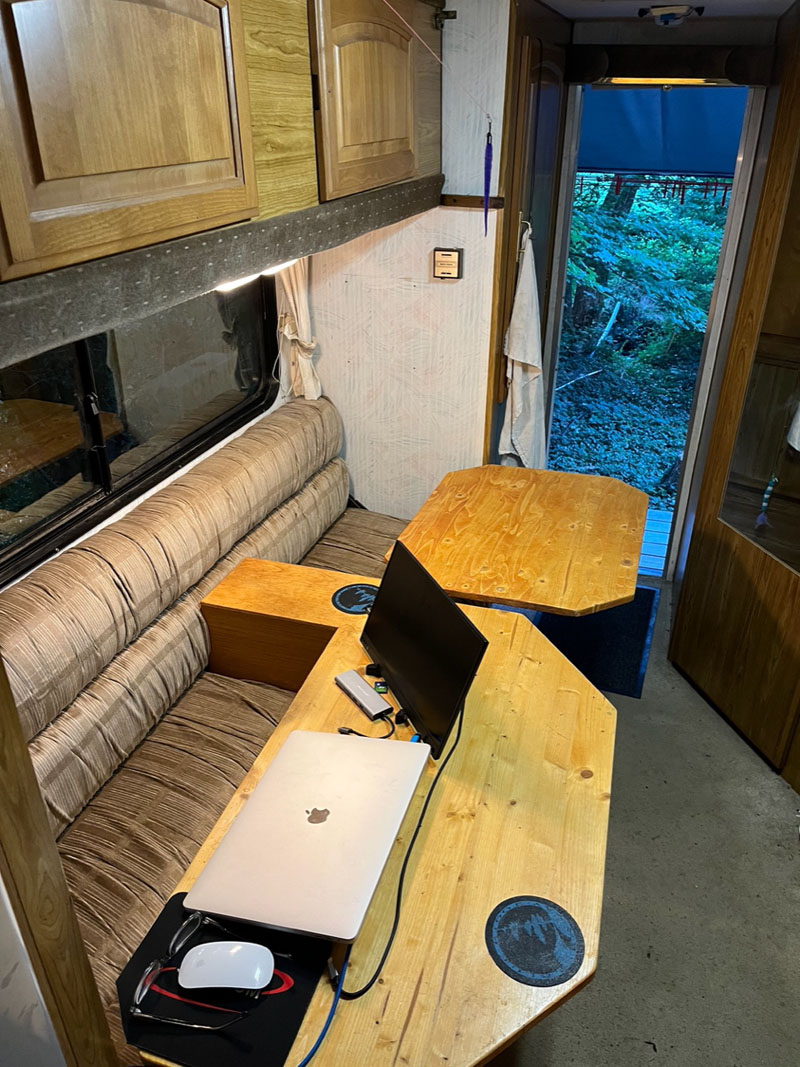 As an added bonus, we can set the laptop down on the stove (and plugged into the Bluetooth stereo) for a very nice TV room. Eventually, I want to add a step so we don’t have to use stools to keep our legs from dangling, but it’s great the way it is.

It took me five hours to complete this modification and cost me $100.  If you know how to weld and cut wood, it’s really easy. Otherwise? Find a friend…