Welcome to the fourth entry in February’s Medium Mod Contest.  One Medium Mod will be published in every Email Alert in February.  At the end of the month we’ll hold a reader vote to determine February’s winner.  Click here for information about the 2020 Mod Squad Contest, including how to enter.

My 2005 Lance 1181 came with a single step which swung up and rested on top of the bumper. 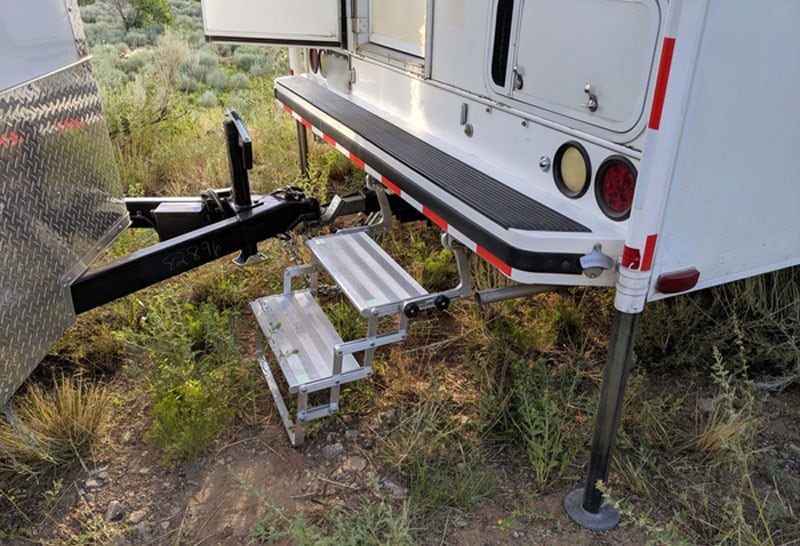 This step can be moved from the center of the camper or moved to the right side for use when towing.  It is convenient to use but, depending on terrain, it can leave quite a gap between it and the ground. 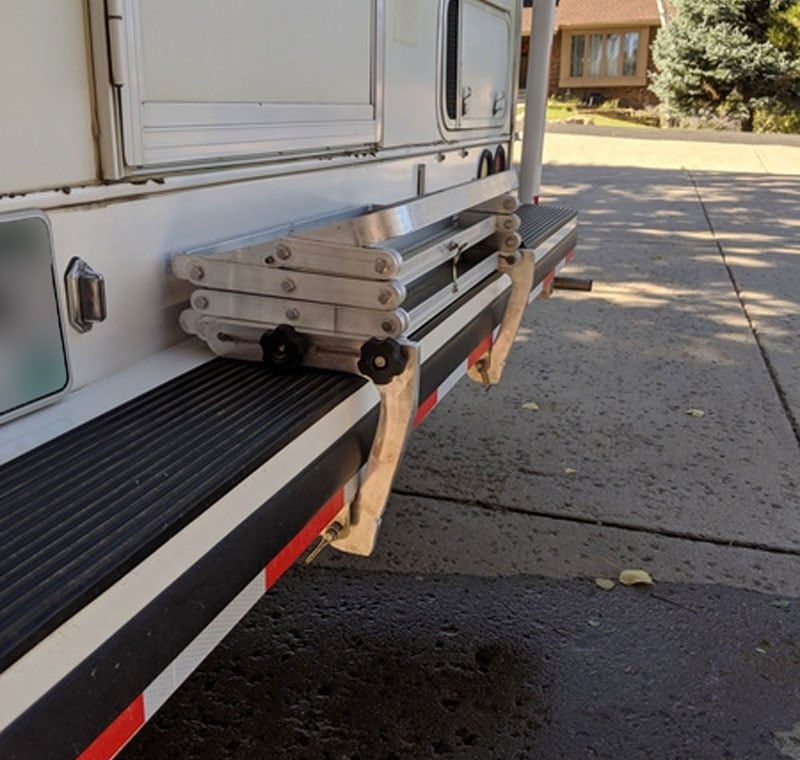 While this system makes storage easier, I didn’t want the system hanging off the back of my bumper.  Plus, since I regularly tow, I wanted to keep the ability to relocate the steps when needed.

I wanted to keep the original storage solution of just flipping the step up on top of the bumper, and I wanted multiple steps when needed.  I also wanted the ability to use just a single step like the factory step or no steps when the camper is unloaded.

So my solution was to purchase a two-step set of GlowSteps, but make my own mounting system which is quite similar to the OEM step.  This solution allows me to use the GlowSteps as a single-step just like the factory step. 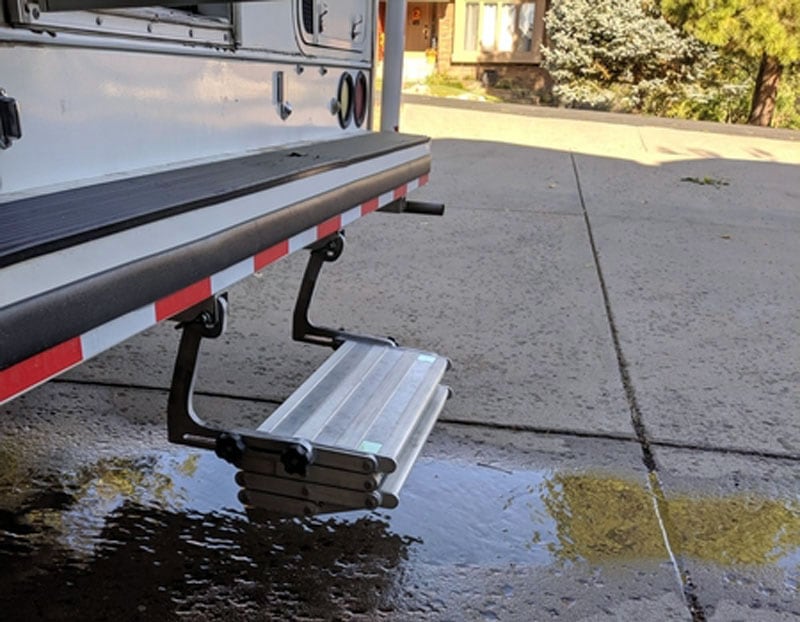 This solution stores on top of the bumper just like the factory step. This solution uses the original step mounting points so it can be moved (center position or right position for towing).  The steps can be easily removed if desired.

My first attempt was to copy the factory step’s arms and make them out of 3/8-inch aluminum plate.  While I was successful in copying the pattern of the original arms, I failed to account for the fact that the GlowSteps are deeper than the factory step.  So, my arms were too short and the steps didn’t rest flat on the top of the bumper.

The next challenge was that the first GlowStep was too close to the bumper when deployed.  It worked, but could be better.  Cutting the arms out of aluminum was a pain and very time consuming as I only had typical tools at the time.  It took 15 Sawzall blades to cut a pair of arms out of a plate of aluminum and tons of hand filing time to smooth out the cuts.

Before I invested a bunch of hours into another mistake, I restarted by making cardboard templates. 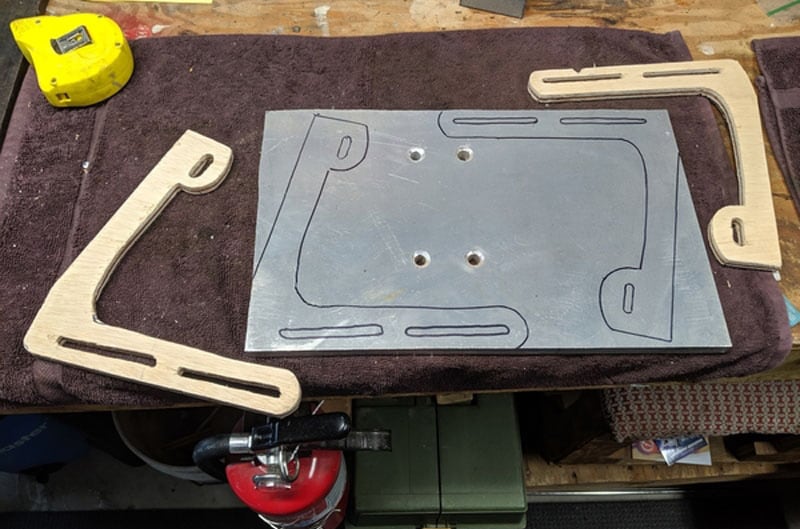 Once I got one that I thought would work, I made templates out of plywood. 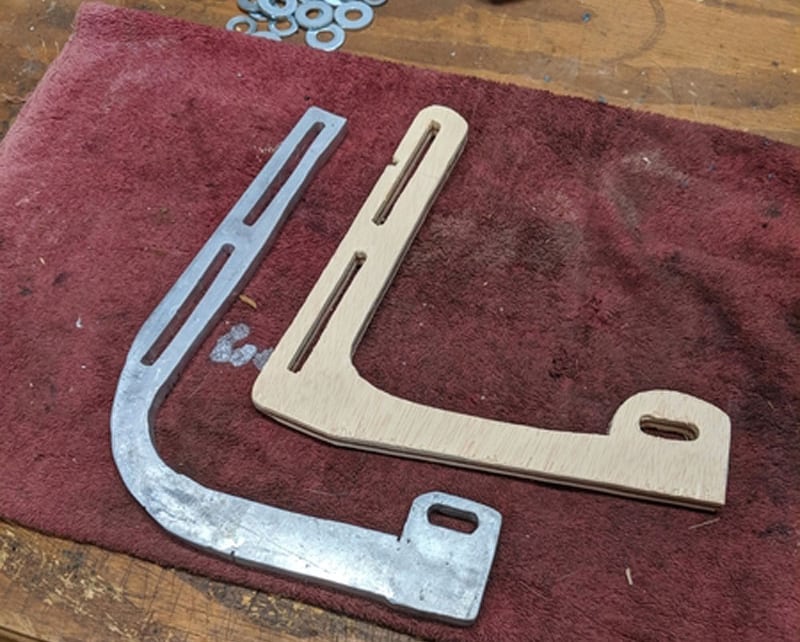 After three plywood iterations I was satisfied. 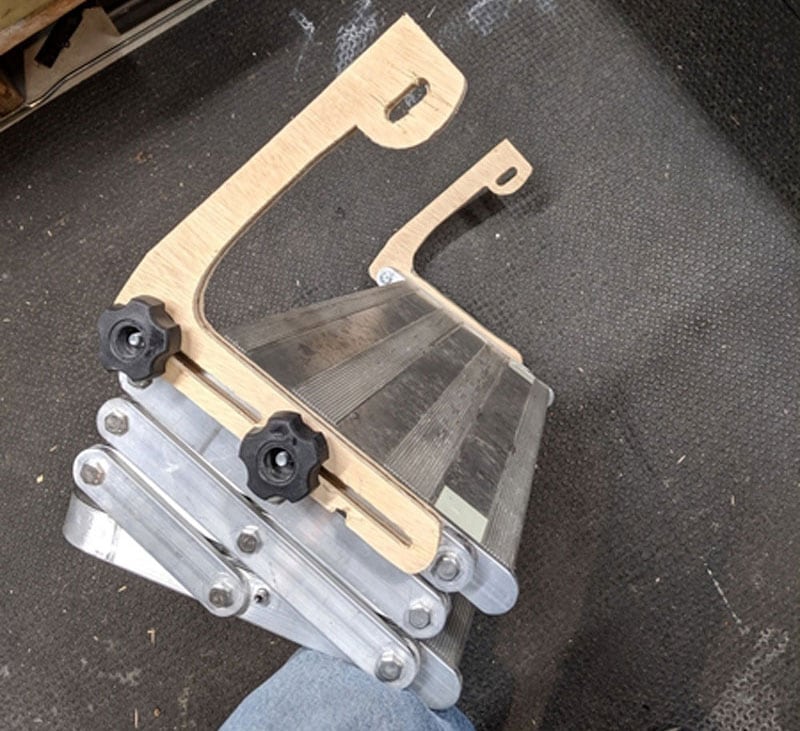 I then used 1/2-inch aluminum to make the new arms. 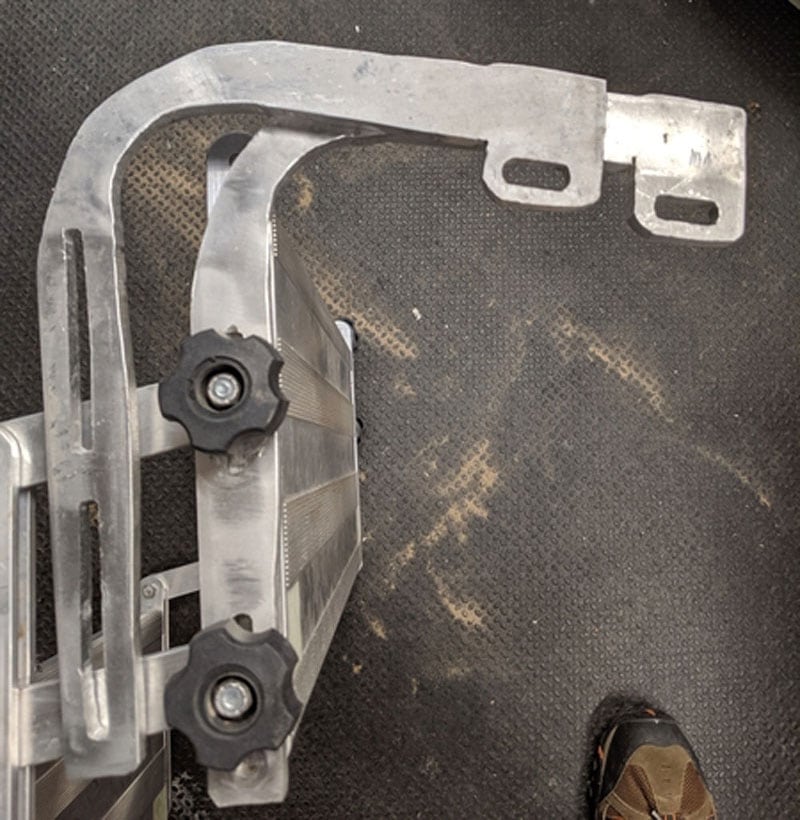 As you can see in the photos, I used hand knobs to allow the steps to be adjusted from travel position to use position. 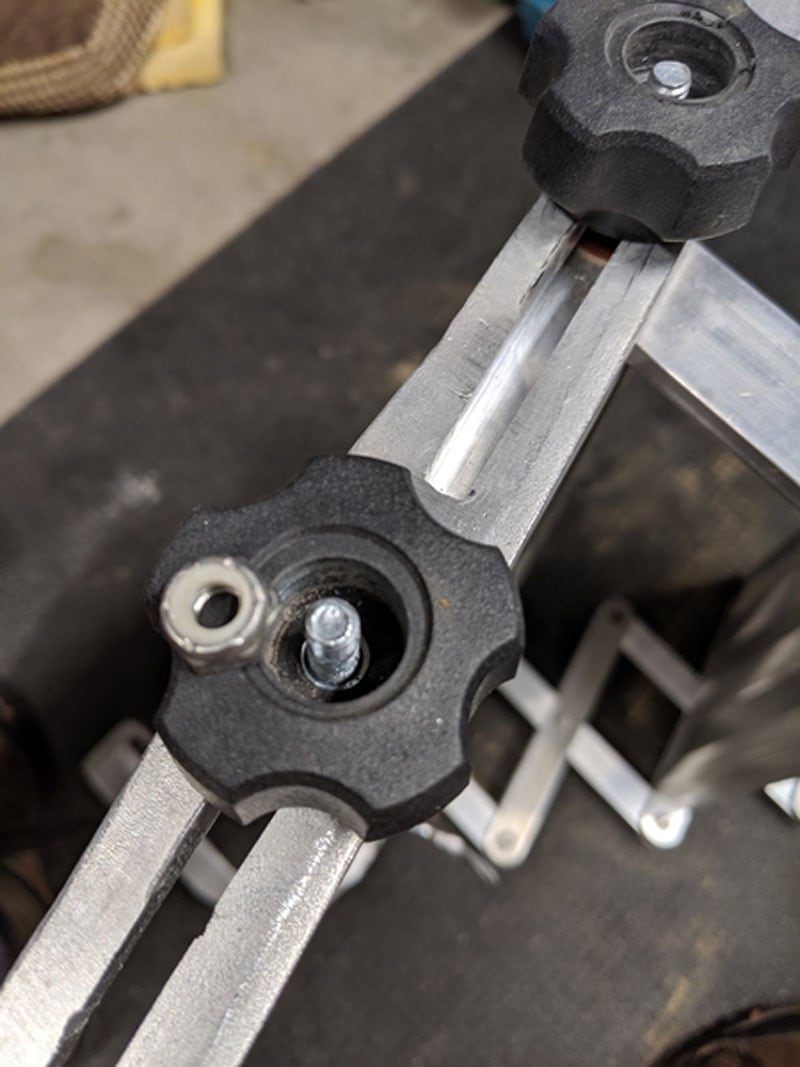 The steps can be used as a single step by just flipping the steps down just like the factory step.  The second step can be used by just deploying the GlowSteps.  With the steps in the stored center position there is very little clearance between the bottom of the door and the top of the step assembly. 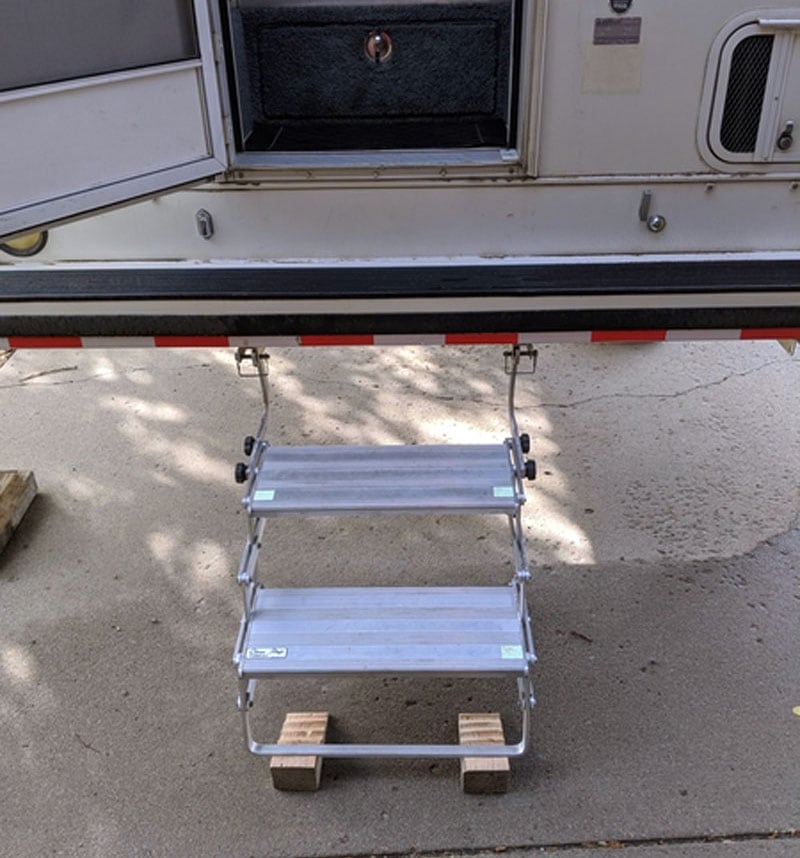 I decided not to build my own Landing Gear, but instead I copied Charlie Coushaine’s step shim block idea.  I have found that this simple solution works great when needed.  And when the ground is level the steps work just fine without anything extra. 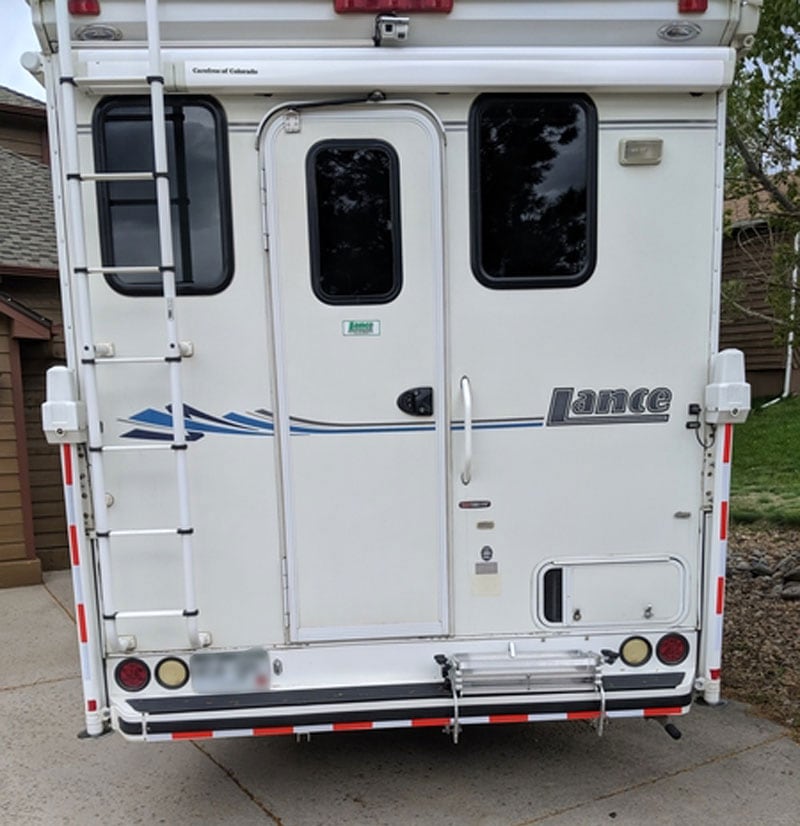 I’ve been using this system for a full season now and I’m extremely happy with the results.

Pros:
– Super easy to store just like the factory step.  No need to remove dirty steps and store them somewhere.
– Everyone in the family can use them.
– Can be used as a single step without extending the second step; just like the factory step.
– Can be easily moved from center position to right position or back.  Uses factory mounts and pins.
– Super stable when second step is deployed to the ground.
– No mounting brackets attached to camper.
– Can easily return to factory system

Cons:
– Needed to relocate the license plate and lights as the new system blocked half of the license plate
– The factory step has a usable surface on both the top and bottom.  My system does not. So it can’t be used in the stored center position.  I just move it to the right side position when the camper is off the truck and the steps aren’t needed.
– While not required, optimal use requires the hand knobs to be loosened, steps slid to the appropriate position (store or use) and re-tightened.
– Cannot deploy both steps without ground contact – too much stress on original mounting points.