The CyberLandr camper for Tesla’s forthcoming electric CyberTruck appears to be happening. Here’s a sneak peek with CyberLandr’s CEO and a tour of the company’s 5,000-square foot Texas development research lab. Oh, and I need to eat some crow. 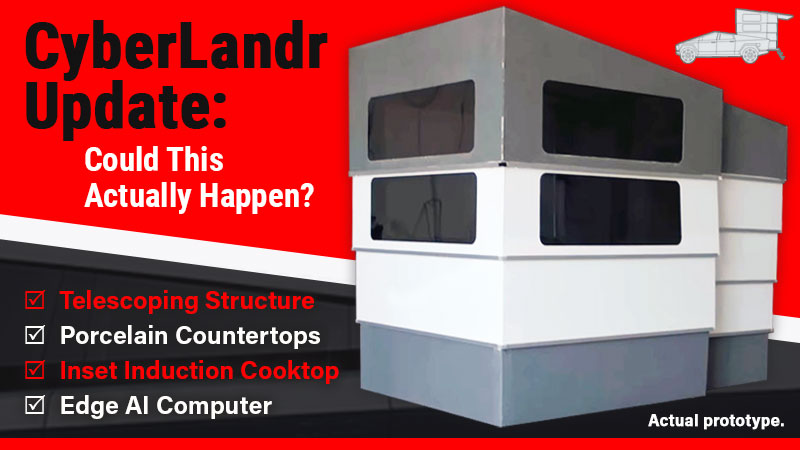 It seems I need to eat a little crow. Maybe a lot of crow.

Above: Click to watch the CyberLandr development lab tour

When I first wrote about the CyberLandr in April of 2021, I thought this whole CyberLandr thing was a joke. At best, it had to be an April Fool’s joke that got out of hand – with thousands of deposits and several million pre-orders. As one who has taken practical jokes a bit too far at times, I was sure I’d spotted a fellow knucklehead. What concerned me what the possibility of a con. 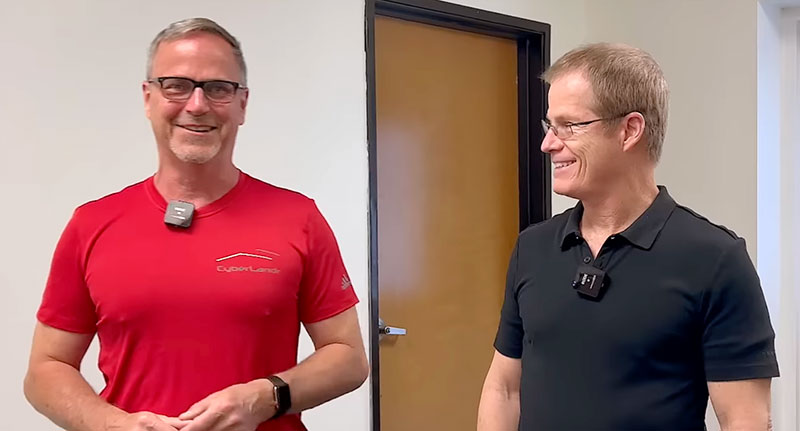 Above: Dr. Know-It-All and Lance King, the CEO of CyberLandr

And yet, here we are with what appears to be an actual video tour by (brace yourself), “Dr. Know-It-All” with apparently exclusive access to the CyberLandr development research lab in Austin, Texas.

In the video, Dr. Know-It-All (Lord help me) talks with Lance King, the CEO of CyberLandr and reveals the CyberLandr prototype with some remarkably clever features. As Lance explains, they’re having to invent things to make this bold concept work. Please pass that second serving of crow please, and some ketchup.

Most of what we have previously seen from CyberLandr has been computer renderings, some of which looked impossible. Materials cannot magically pass through materials. Walls need to have a certain thickness to support weight, hold components, support cabinetry, withstand the elements, and travel at highway speeds. You know, physics. 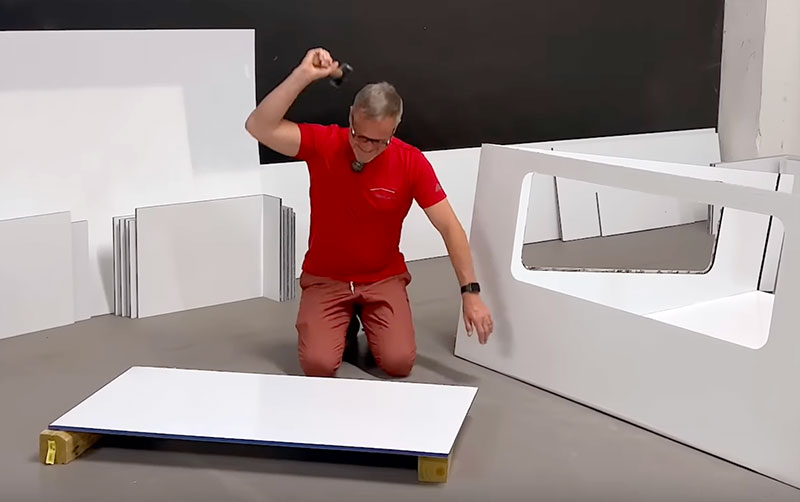 So how did they build a CyberLandr engineering prototype? With the use of an unnamed lightweight composite material that can evidently withstand a good hammer whack from Dr. Know-It-All, and his full weight. 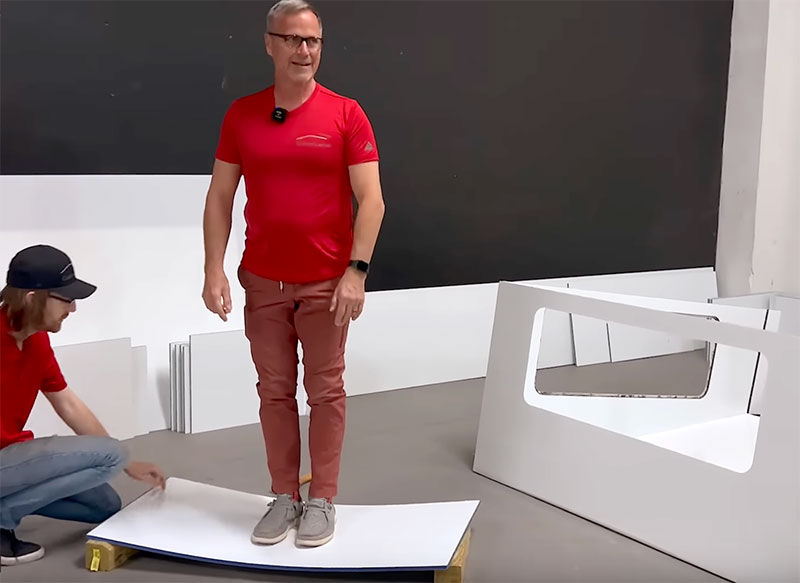 All Lance will reveal is that it’s an “advanced composite” that’s been in production for many years and is evidently FDA approved for contact with food.

We have seen composites of this caliber and strength before, but perhaps not to this extreme. We’re obviously impressed that they pulled this camper form together, but still have a lot of questions. What about the insulation value of this composite? And how are the collapsing vertical sections sealed against the elements?

The kitchen counters and cabinetry yield at least two more interesting uses of material. The cabinet faces are made with High-Density Polyethylene (HDPE). This often recycled plastic lumber material has been used in truck campers for years, but perhaps not to the degree shown. It’s also weather-resistant for use in outdoor signage, decking and fencing. 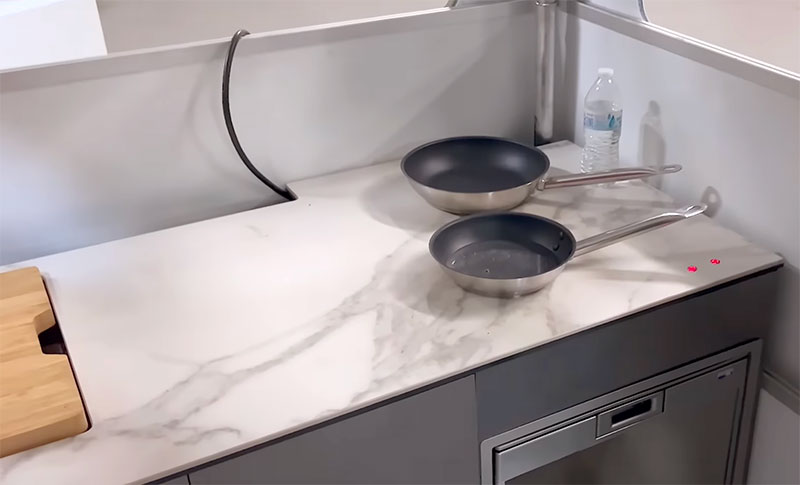 Above: The induction cook tops operate through the porcelain countertop

Even more interesting, the countertops are porcelain. Porcelain offers high heat endurance, is about 30-percent stronger than granite, is scratch-resistant, and is also impervious to water. It’s also expensive (but cheaper than granite, marble, or quartz) and can crack under blunt force – like glass. Don’t hit it with a hammer, or drop a can of chunked pineapple at an angle.

Regarding that heat endurance, the CyberLandr design places two induction cook tops under the porcelain countertop that cook through the porcelain. You read that right. The cooktops are under the countertop.

You put an induction-ready pot directly on top of the counter and activate the induction. This is one of those, “what the” moments that make this video worth watching. Lance boils water in real-time on the porcelain countertop. Then he puts his hands on the countertop immediately afterward. It stays cool to the touch. 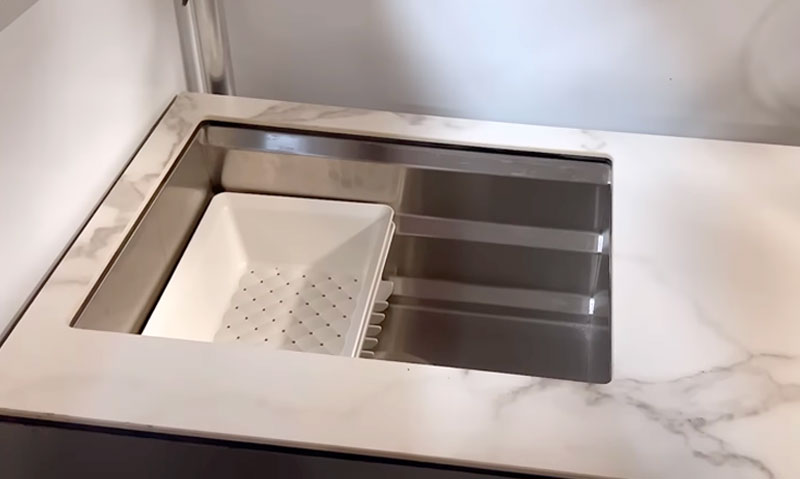 The tri-level stainless steel sink with built-in colander and drying rack is another forward-thinking touch. The sink has different inset levels that capture the modular colander and drying rack. This is a very efficient approach to creating a multi-use sink. Can a sink be smart? Compared to what’s in our camper, this one certainly is. 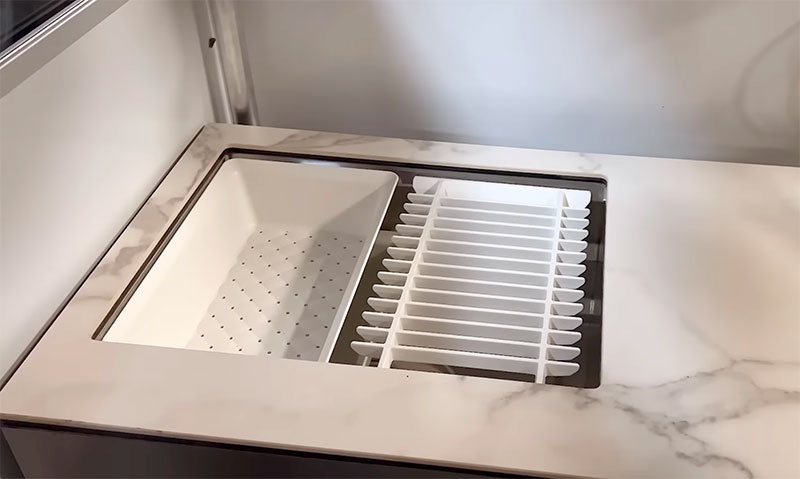 There’s more, but most everything else is still in the development phase. The telescopic lift system is still in the works. The Edge AI computer that helps to heat the hot water system (what?) is still somewhere between concept and component. 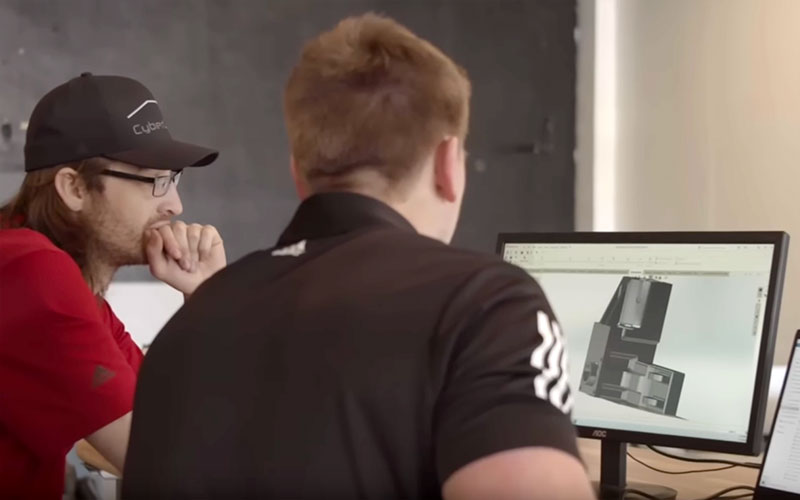 The bathroom with recirculating water and a bag toilet system only exists on the computer. The electrochromatic glass windows that automatically switch between translucent and opaque remain unclear.

You get the idea; there are a lot of far-out ideas that are still far out. Way out.

For the record, I am still not 100-percent convinced that this whole CyberLandr thing will come to market, but I am convinced that there’s a smart team of American entrepreneurs and engineers working hard to see that it does.

It should also be mentioned that the path forward for CyberLandr will be extremely hard. For one, CyberLandr is still a company building a company rife with unproven design ideas for an electric truck that doesn’t yet exist.

For two, the Tesla CyberTruck itself has been promised for early 2023, but that’s not the first date (or the second) we’ve promised for the silver wedgie of a pickup. They could re-engineer for a Ford F-150 Lightning, but it would take time. 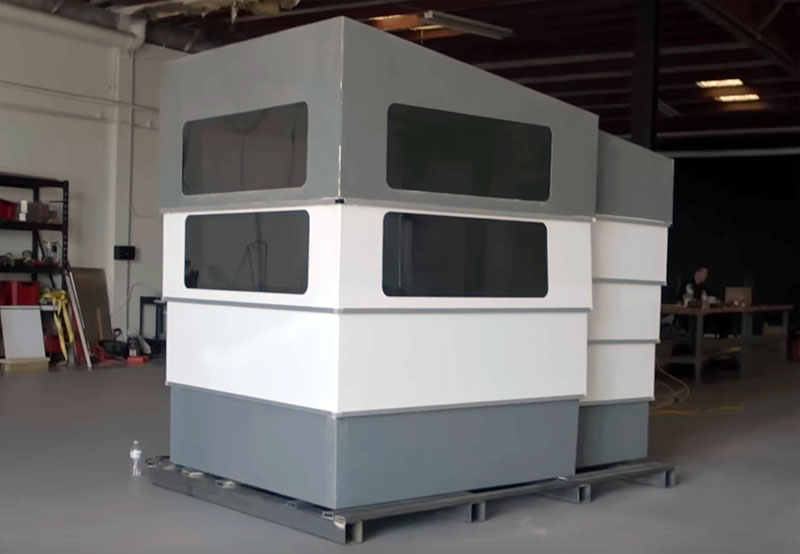 And finally, there’s the huge turn from a fully-functional prototype (which remains to be seen) and a factory production line that delivers finished campers to customers.

We’ve seen dozens (and dozens) of clever camper designs over the years that fail to make the extremely difficult transition to production and delivery to actual customers. As I like to say to these wide-eyed builders, “One brilliant camper in a garage isn’t a company.”

Heck, half the electric vehicle start-ups remain stuck and spinning at a version of this juncture. With something as complex as a truck camper, that transition is never guaranteed.

Now that I’ve had a chance to digest my crow – beak-to-tail-feathers delicious I might add – I am rooting for this nascent Texas team. Despite my published doubts, there really is a team working to build a CyberLandr truck camper.

In all seriousness, I love the idea of something so fresh, daring, and future-driven coming to market and proving all the naysayers wrong.

In January of 2007, I had my fair share of would-be readers and industry leaders tell me I was out of my noodle to even dream of launching Truck Camper Magazine. The project would never make it. It wasn’t sustainable. And if it did, it couldn’t possibly make an impact. Well, guess what?

Thank you to TCM reader, Charlie Coushaine, for bringing this video to our attention.