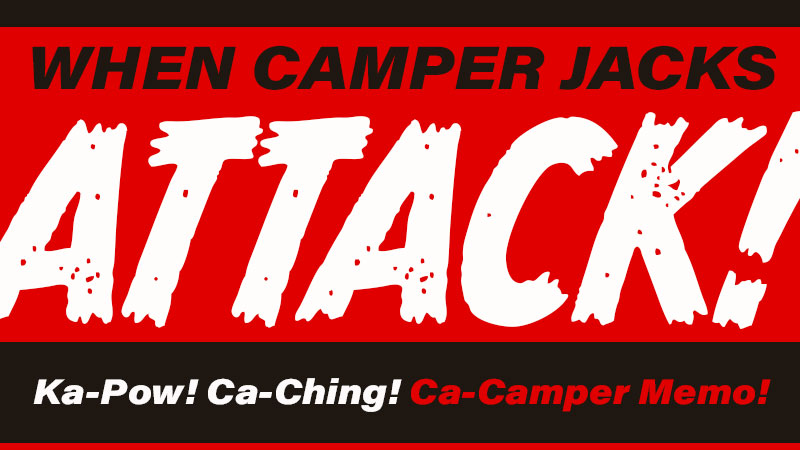 After truck camping for 16-years, we’ve made some very stupid mistakes – especially in the beginning.  Fortunately, we’re so paranoid that we always check and re-check the jacks and our rig before take off.  The worse that’s happened to us was a left-up TV antenna (how embarrassing) or left a window open. 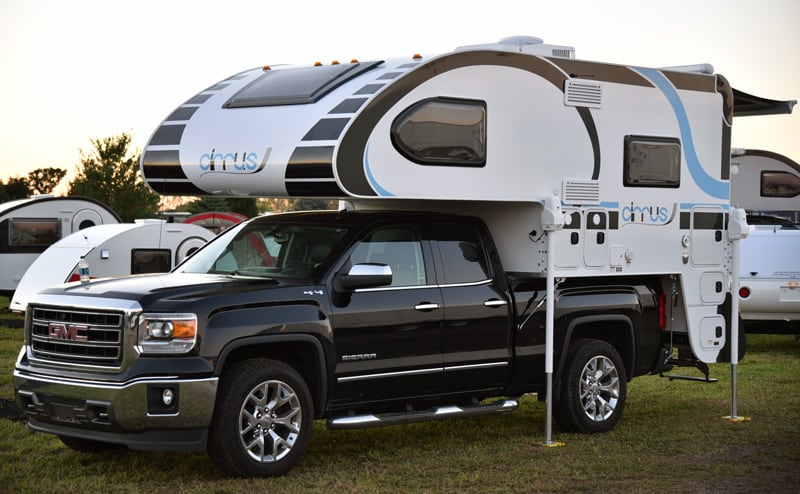 Above: Remember to lift your jacks before you drive away.

Some fellow truck campers have not been so lucky.  It’s unfortunate that forgetting to move your swing-out brackets or lift your jacks can lead to expensive damage.  Given the right circumstances, any of us could get distracted, and forget.

Squirrel!  What was I saying?

I hate to admit it, but I made a big mistake on unloading my Lance camper.  I hope this will help someone else.

I drove the camper into our backyard, put it on the concrete pad, and brought down the jacks to lift the camper off the truck.  That all went well until I was ready to move the truck out from underneath the camper.  As I moved out things did not seem right.  Then I heard a noise.  I stopped the truck and went out to look.

The swing-out brackets started to bend.  I looked around to see what went wrong.  Stupid me, I forgot to take cabover struts off. 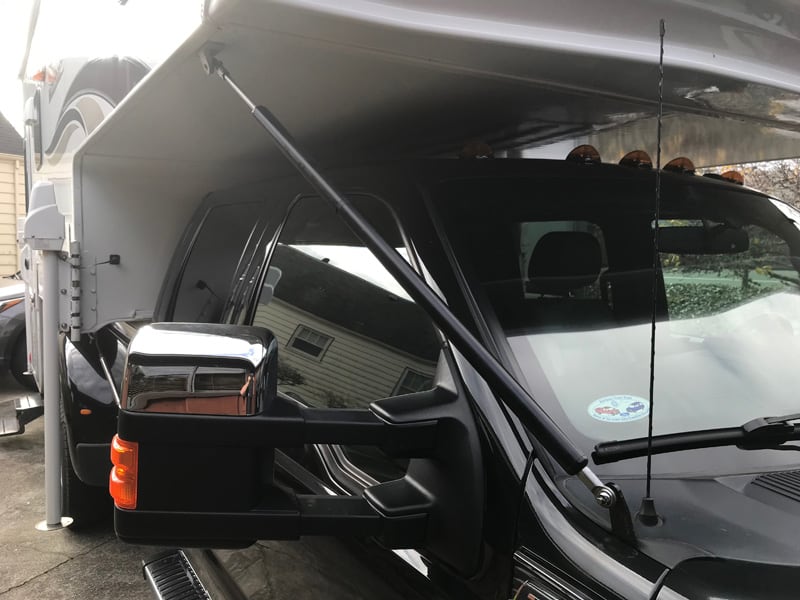 The next day I had to take off the swing-out brackets and hammer them straight again.  Lucky I didn’t bend the jacks.  All was good again.

Another time taking off the camper I forgot to put swing-out brackets out.  I rubbed the dually fender and had to take it to a paint shop.  I’m not the normally the type to make these kinds of mistakes but, things happen. 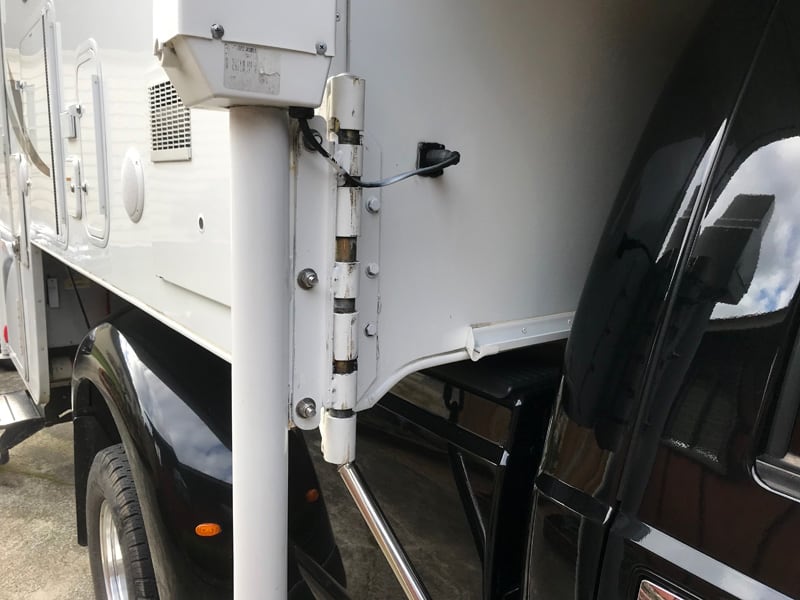 Do a walk around to make sure everything is disconnected before unloading your camper.  Also, make sure your swing-out brackets are in the correct position.

I was dropping my new Lance 850 at the dealership for some repairs needed after we received it.  I was an hour from home, by myself, and it was very cold out and dark.  I ended up needing to plug the camper into a 110-volt outlet to get the jacks working.

I put the jacks down, undid all the Torklift tie-downs, and proceeded to slowly pull out.  I felt a little resistance and backed up a little and got out and looked.

My brand new 2017 Chevy 3500 dually (yes, dually) had a very slight kink in the fender.  I had forgotten to turn the dually jack extensions out!

Make a checklist for all your attaching and detaching items.  I have had two other duallies with truck campers and never had that happen.  Of course, I’m much older now!

Don’t Forget To Raise Your Jacks Before You Move 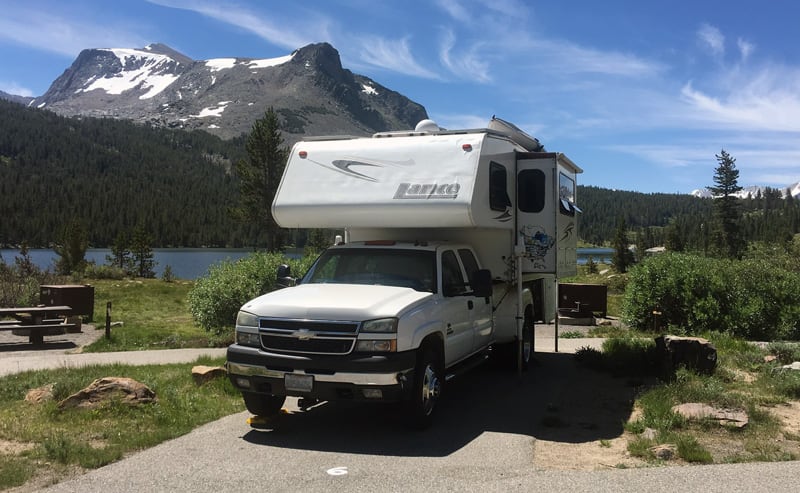 I once drove our truck and camper off the leveling blocks and forgot to raise the camper jacks.  In doing so, I pretty well destroyed the front jack swing-out hinges, but the camper jacks themselves were okay.  The problem was that I was busy talking to our neighbor and not paying attention to the proper sequence of events requires to move the truck and camper.

As a pilot, I should know better than to do a series of important steps without a checklist.  It takes discipline to recognize that you are being distracted.  Distractions abound.

Here’s my sequence of events: 1. Bring the slide-out in. 2. Disconnect the external utilities. 3. Bring the camper jacks up. 4. Roll-off the leveling blocks.

Years ago, before we had our current Lance Camper, we had a Real Lite truck camper.  This is before Palomino bought the company and Real Lite was still an independent manufacturer in Indiana.

Anyway, while truck camping with our Real Lite, we saw an ice cream store and said, “Hey, let’s stop”.  We were in Idaho.  We parked our truck camper at about a 15-degree angle.  It was practically sideways!

Sitting in the camper I ran down the left electric jack down.  We ate our ice cream and got ready to leave.  I shut everything down and walked around the passenger’s side to help my daughter in, walked around the front of the camper (which I never do now), started up the truck, released the parking brake, pulled away – and boom!

The left jack broke off the back of the camper.  I felt sick to my stomach!  I’ll remember that horrible sound for the rest of my life.

I called the Real Lite factory and they told me to bring it in.  I drove Sunday night to Indiana, backed up to the factory, and went to bed.

While I was sleeping at the factory, I heard a loud bang!  I jumped out of bed in my underwear and discovered one of the employees had backed into our camper and bent the right jack!

I couldn’t chase him in my underpants, but I got a good look at who he was.  I got dressed, ran into the factory, and was told I couldn’t be in the factory. I explained what happened and I wasn’t very quiet.

Finally, the owner came out and we talked.  He said, “We’ll fix it all”.

I left the camper there not to happy, but when I came back you couldn’t tell anything had happened. They fixed the camper.

Look and look again all the way around your camper. Always walk around before you unload and reload it on your truck. When you get in your truck and something in your gut just doesn’t feel right, get out and look again.