Every few years I like to find out the craziest weather you’ve encountered while truck camping.  Perhaps you woke up to a foot of snow, or an inch of ice, or endured a punishing hailstorm.  Maybe you experienced extremely high winds, a blistering lighting and thunderstorm, or flooding.

Tell us your craziest weather while truck camping story from the past three years.  We want to know where you were, what extreme weather you encountered, and what happened.

After truck camping out west last summer and fall, we returned to the east coast to see our families for Christmas.  During our visit, nightly low temperatures dropped into the mid-20s Fahrenheit.

We had the camper winterized.  Even so, I worried about every material and component of the camper getting that cold.  Would the side and roof seals dry out and crack?  Would the batteries freeze?  Would the RV anti-freeze fail?  Fortunately, none of the above happened. 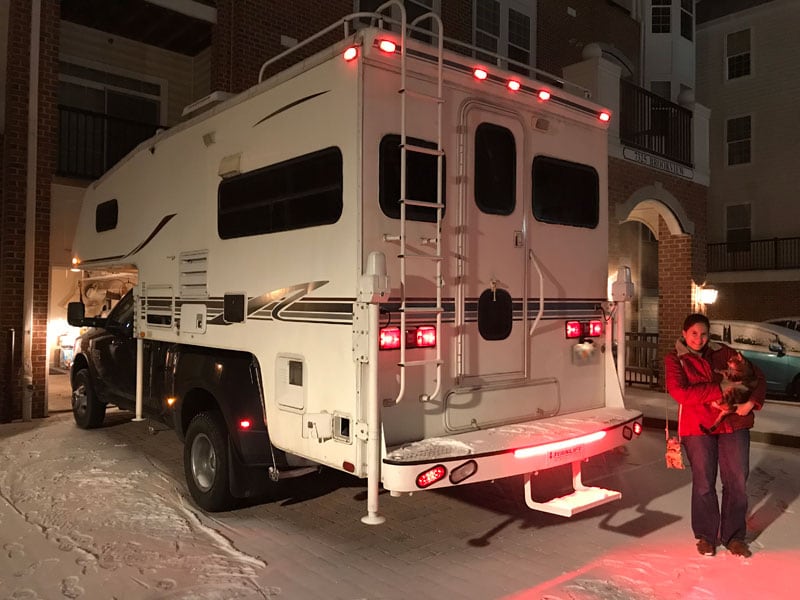 On the morning we left for Florida, it was 14-degrees and snowing.  With dreams of palm trees and sunshine, we set out at 5:00am in an attempt to avoid beltway traffic around Baltimore and Washington DC.  Hit that wrong and you just sit.

We quickly exited for Tyson’s Corner, Virginia and pulled into a gas station.  Wouldn’t you know that their windshield wiper fluid was also frozen solid!  The wiper was literally frozen in the bucket and would not budge – like Excalibur.  In the midst of discovering that I would not be king, I had an idea…

I went into the camper and filled the spray bottle we use to discipline Harley (another story) with RV anti-freeze.  Then I generously sprayed RV anti-freeze on our windshield.

The Question of the Week is, “What is the most extreme weather you’ve ever experienced while out truck camping since 2014?”