For the past month or so we’ve been asking our readers about the stuff they tow behind their truck camper rigs.  We asked about towed boats, utility trailers, scooters, mopeds, motorcycles, Jeeps, inflatable boats, canoes, and kayaks.

“I tow ATVs.  Can we play too?” came an email, with a photograph of ATVs on a trailer.

“Here are the race cars we tow to the track.”

“How about the horses?  We tow a horse trailer.”

Each time Angela would thank the reader for their submission, and put it in a folder.  Truth be told, we planned a final towable Question of the Week for everyone that towed something that didn’t fit into the aforementioned categories.

We want to hear from truck campers who tow barbecue smokers!  Or airplanes, tractors, race  cars, horse trailers, jet skis, snowmobiles, and ATVs for that matter.  Flat towed or open trailer, we love all towed toys, and want your towed toy story told.

Finally, at long last, after weeks and weeks of excruciating patience, it’s time for the no holds barred “What do you tow?” Question of the Week.  If you tow something behind your truck camper, and haven’t been able to participate these past few weeks, this is your moment!

This week’s Question of the Week is, “Tell us what you tow behind your truck camper.”  Please, no towed boats, utility trailers, scooters, mopeds, motorcycles, Jeeps, inflatable boats, canoes, or kayaks.

Click here to see reader responses to this week’s question of the week.

Here are some fun examples and some inspiration from past calendar contest galleries. 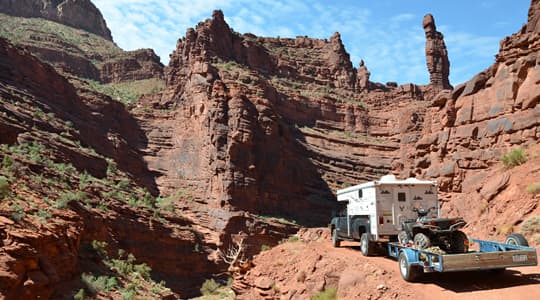 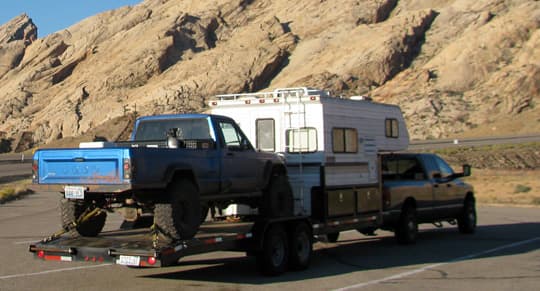 Photo Courtesy of Gordon White, 2013 Chevy 3500, 2014 Northstar Arrow U.  We use this rope to lasso new readers for Truck Camper Magazine.  It’s an old school approach to capturing market share, but it works. 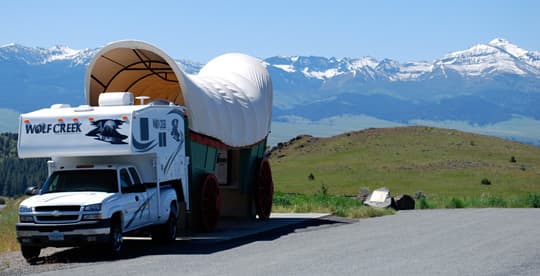 Photo Courtesy of Gordon White, Chevy 3500, 2011 Wolf Creek 840.  This trailer was terrible in the wind, and I got tired of folks joking about our giant towable taco, but we were literally able to bring everything from home, including our house.