At the 2014 Mid-Atlantic Truck Camper Rally earlier this month, three extraordinary truck campers showed up.  One camper pulled in from Pennsylvania, another moseyed from Massachusetts, and a third rolled in from Illinois.  A very rare opportunity knocked.

We were playing with the idea of a group shot of the three campers when D. Gorton, owner of one of these gorgeous campers, had a vision.  He described a sunset photograph near the water, taken from above, with the campers splayed just-so for the setting sun.  A half-hour later we had talked to the other two camper owners and set a time. 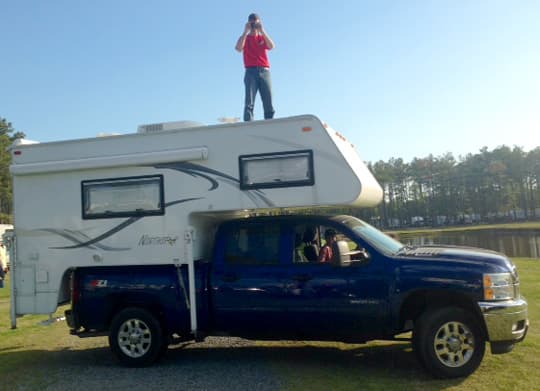 By 5:45pm, Angela and I had brought our 2014 Northstar 8.5 Arrow U to the photo shoot.  D helped us direct the campers into position.  As soon as I climbed on top of our camper, I could see this photograph was going to be amazing.  D’s vision was right there in front of me.  All I had to do was capture it.

That’s when a large lumbering cloud drifted in, rudely obscuring the warm sunlight.  Everyone stayed put and waited as this cloud languidly floated by with an excruciating lack of urgency.  Clouds can be so discourteous. 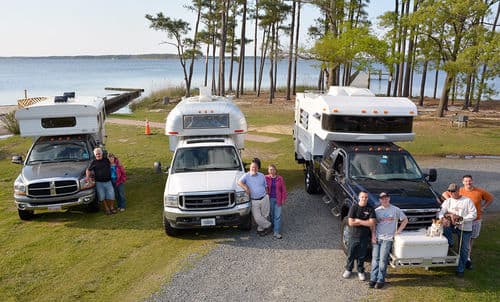 The frustrating mass of condensed water vapor eventually passed and the glorious late afternoon sun flooded the scene with a radiant glow.  A few shutters latter, we had it.

The result of D’s vision and the cooperation of two other truck camper owners, this is a photograph I’m very proud of.  You’re looking at truck camper history folks; the truck campers themselves, and the special moment this photograph captured.

This week’s Question of the Week is a challenge.  Do your best to name the exact year, make, and model of the three truck campers.  Hint: Each camper is from a different decade.

To see the year, make, and model of these three campers, click here.  We also reveal even more from this amazing photo shoot.