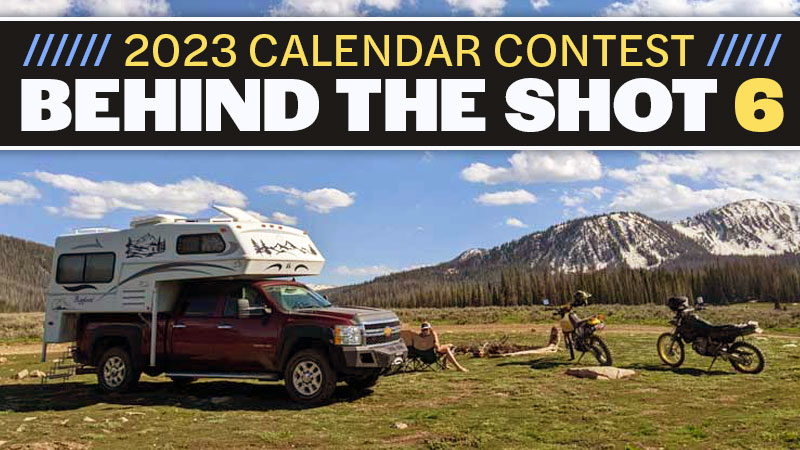 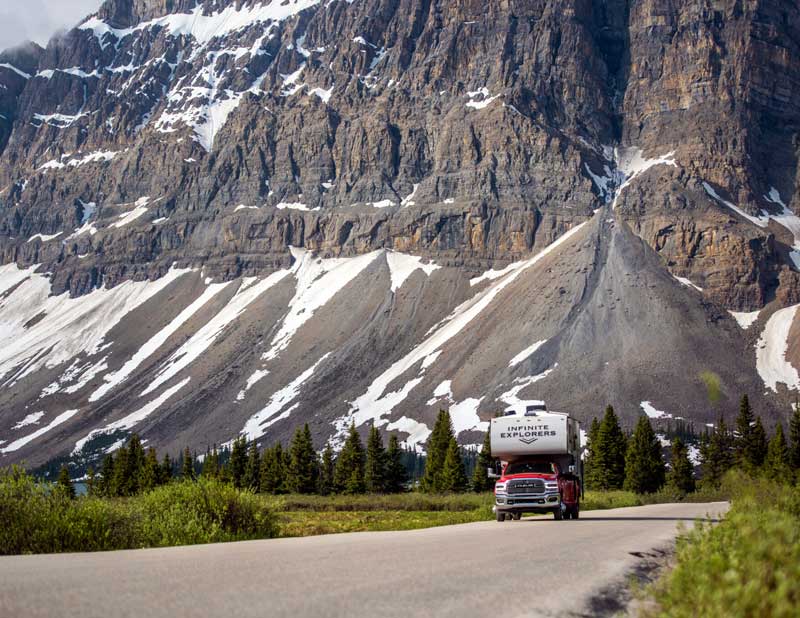 As we left Bow Lake in Alberta, we noticed how tall the mountains were surrounding us. We stopped to take a photo and show how little our Ram 3500 and Arctic Fox 1150 were compared to the scene around us. Clouds were flowing over the mountains to block the peaks from view. Every mile (or kilometer in our case) had a completely new view as we drove up the Icefields Parkway. 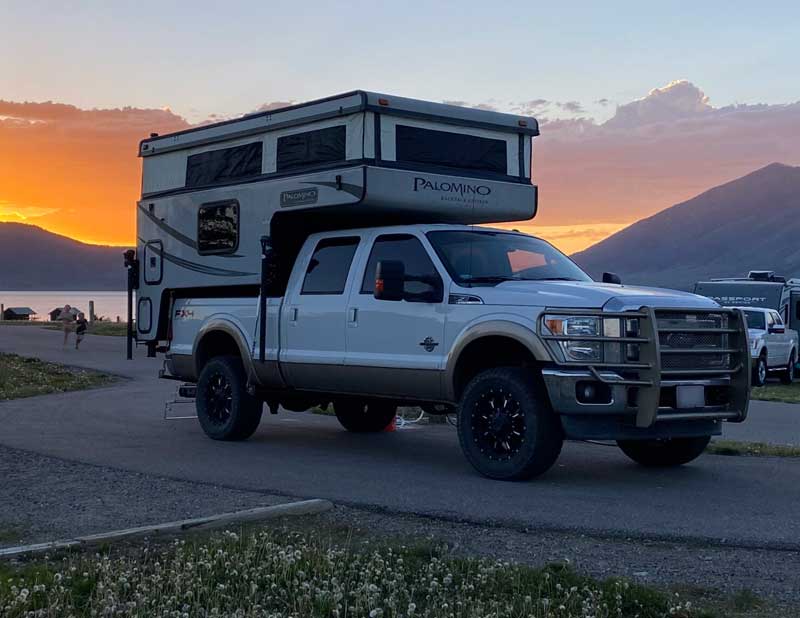 In celebration of my 50th birthday, we left South Texas on an epic 10 day road trip to discover the beauty of the great west. On our way from Idaho Falls, ID to Yellowstone National Park, we found this beautiful state park in Eastern Idaho just southwest of Montana to bed down for the night before making our way into our nation’s oldest National Park. As the sun melted behind the mountains and the lake, I saw a great opportunity to capture our temporary home-on-wheels. I took several shots with my iPhone 11 Pro and this was the best representation of the beauty that we experienced that evening. 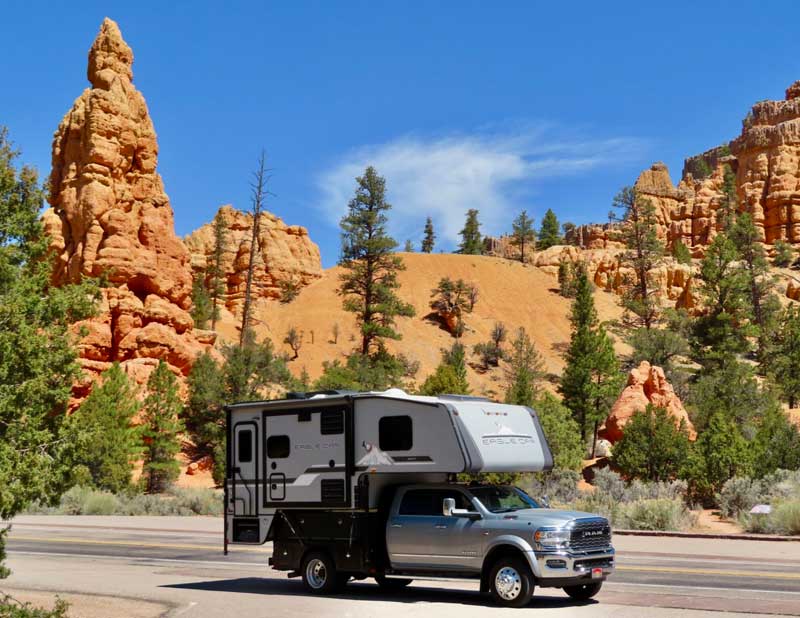 We were just passing through the area on our way to Bryce Canyon National Park. There was beautiful scenery, so we just had to stop to take a few pictures. 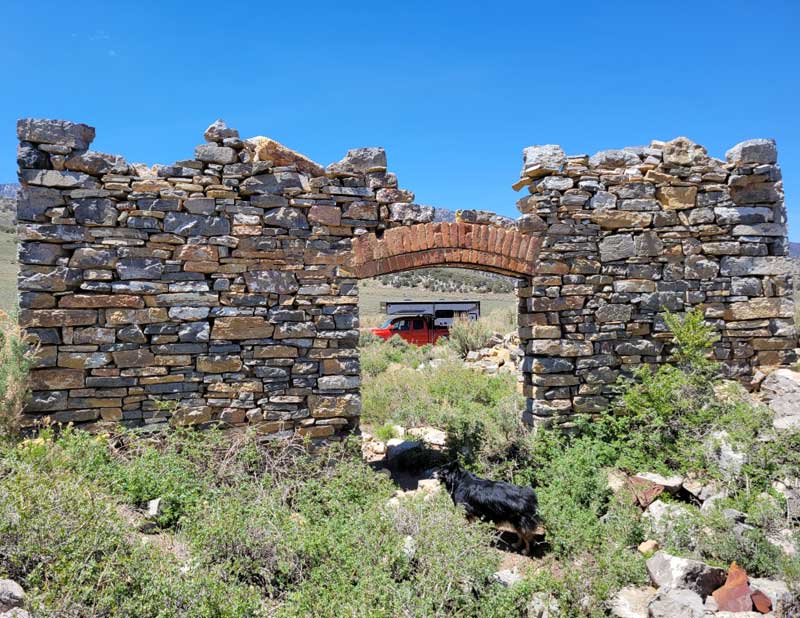 Our longest trip in the new popup was a ghost town and fishing adventure. The photo is at a ghost town called Hamilton which is just North of Ely, Nevada. The dirt road took us through a mountain range with wild horse herds and beautiful high desert views. We descended into Hamilton but were still at roughly 7000 feet. It’s an old mining town. We stopped in the cemetery and noticed that many of the gravestones were marked with the year of death in 1907. The structures were numerous with the first one we stopped at we could get the shot with the truck framed by the archway of the entrance. 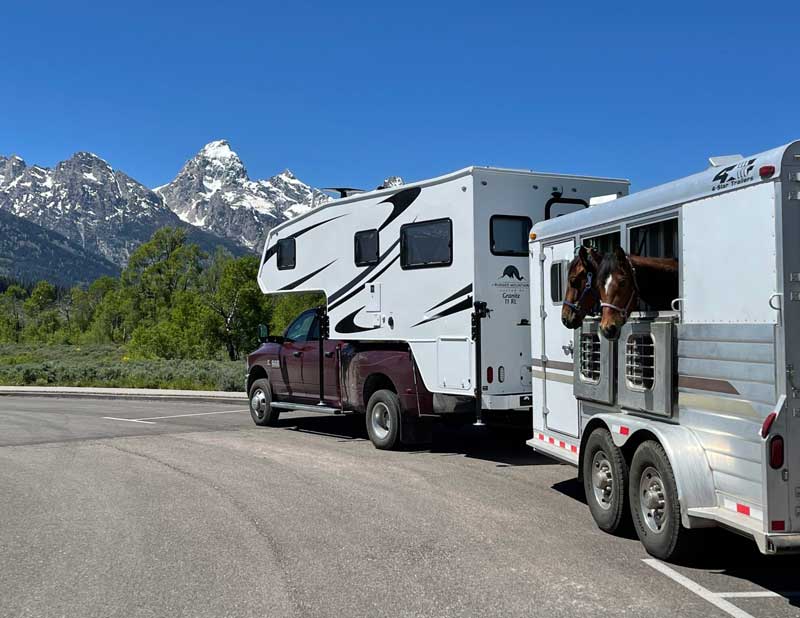 We went from Minnesota to Wyoming to pick up a new horse. Then, we continued on to Idaho to pick up new truck camper. This was on our way back. We wanted to ride the Tetons before we headed for home. We had camped at a horse motel in Driggs, Idaho, the night before – ‘Ear’s the Place Equine Inn. We then went on to Riverton the night of this photo to another horse motel – Boony Bash Equine RV Park. 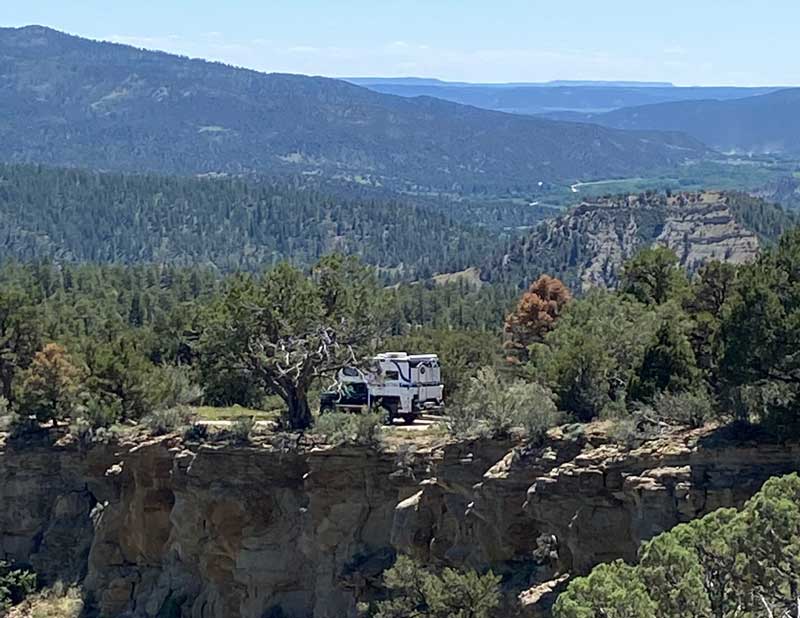 My husband Dave and I were traveling in the southwest area of Colorado. We always stop at National Monuments that we find on our travels. Chimney Rock National Monument was a great stop. We hiked up the Great House Pueblo trail; an elevation of 7,600 at the top. On the way back down the trail, we saw our pickup truck camper looked like it would be a great photo. 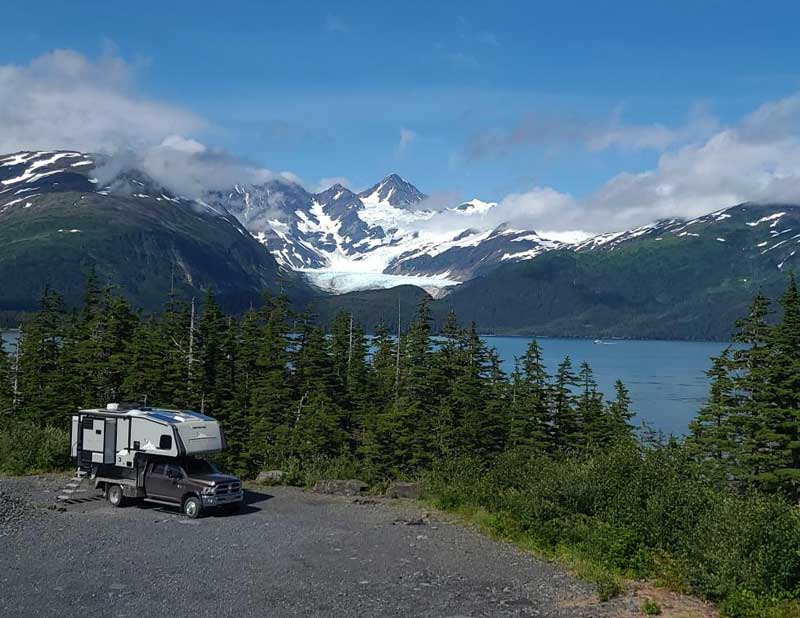 We were boondocking for a few days in Whittier, Alaska, waiting on the clouds and rain to clear for pictures and a day of epic hiking. 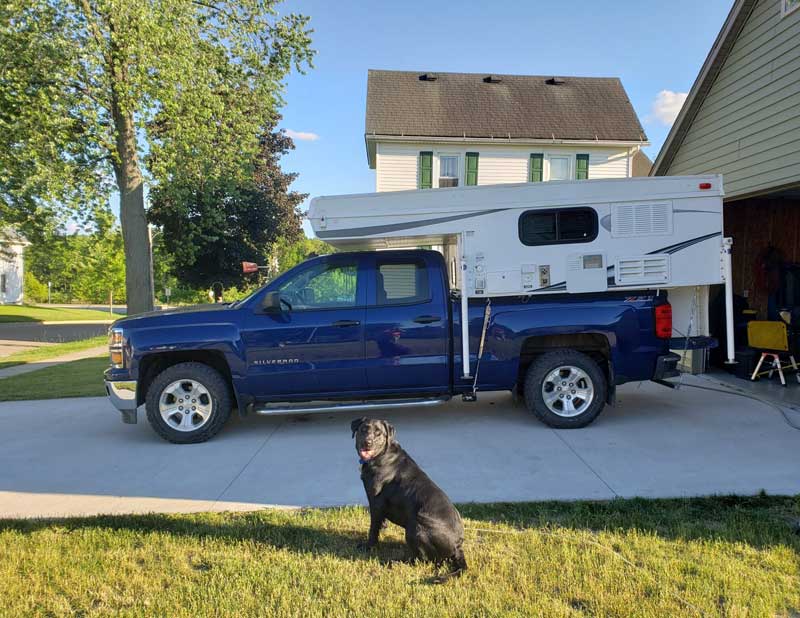 I went to Otter Lake Campground by Tomahawk, Wisconsin. It was my first trip with my dog! He loves to sleep over the cab. 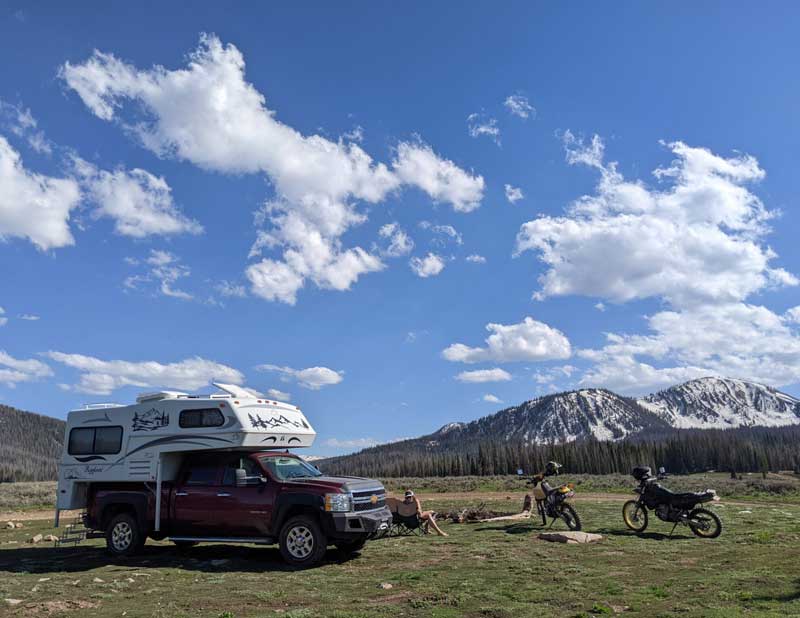 We try to get into the Uinta National Forest whenever we can. This was a perfect weekend before bugs and up out of the Salt Lake Valley beating first weekend with triple digit heat. 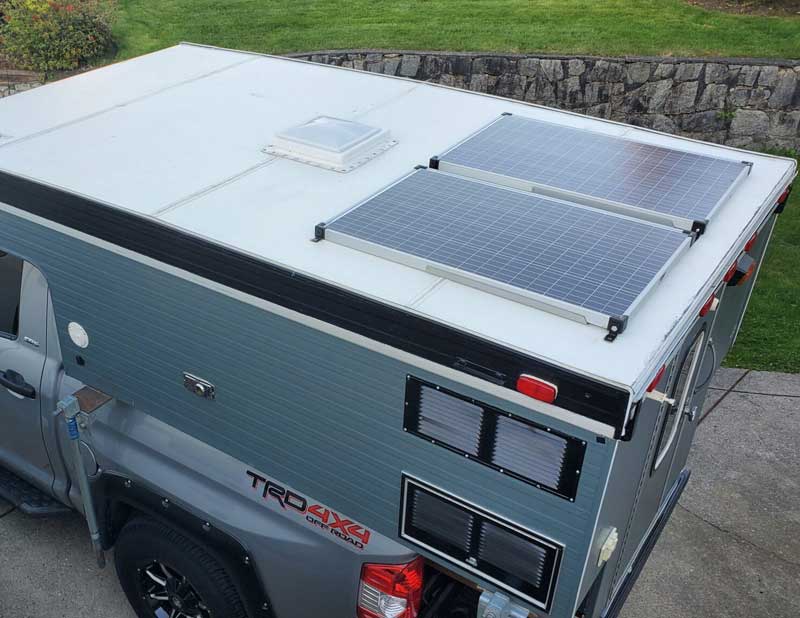 This was my 2021 winter Covid project while staying low profile. I rebuilt the overhang bed platform area, upgraded for solar ready, installed a set of 200-watt solar panels, and worked on some interior items. I also re-sealed and painted the exterior. I went out with it a couple of weeks ago and I’m loving it.