For Behind the Shot Part 5, we are featuring photos and stories from New York, Montana, West Virginia, Utah, Alaska, and more!  Click here to participate in the 2023 Truck Camper Magazine Calendar Contest. 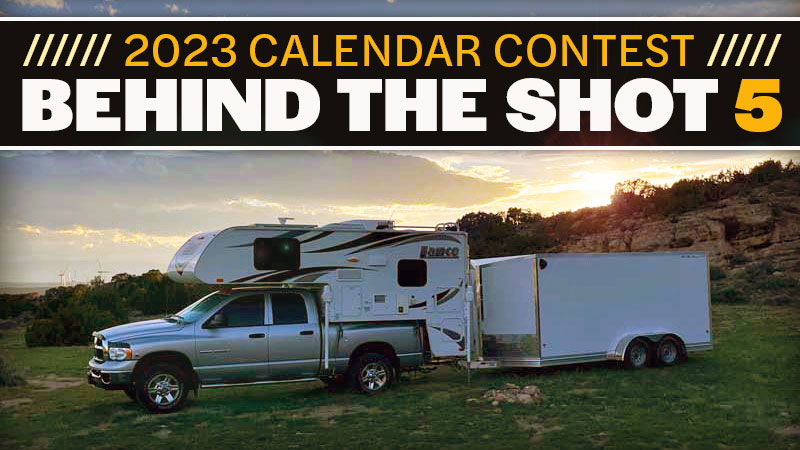 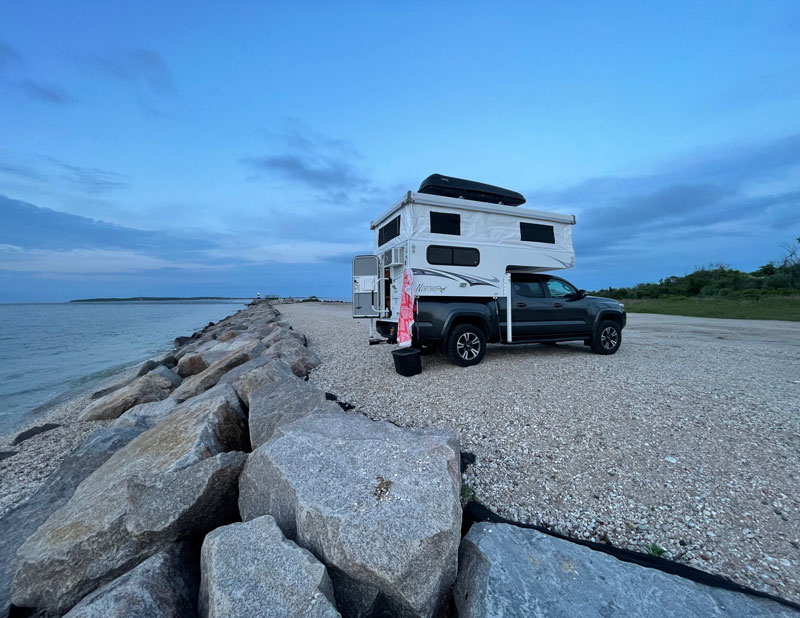 This picture is from a surf casting trip to the tip of the north fork of Long Island with my wife for our anniversary. No luck catching any fish, but we enjoyed an amazing sunset. 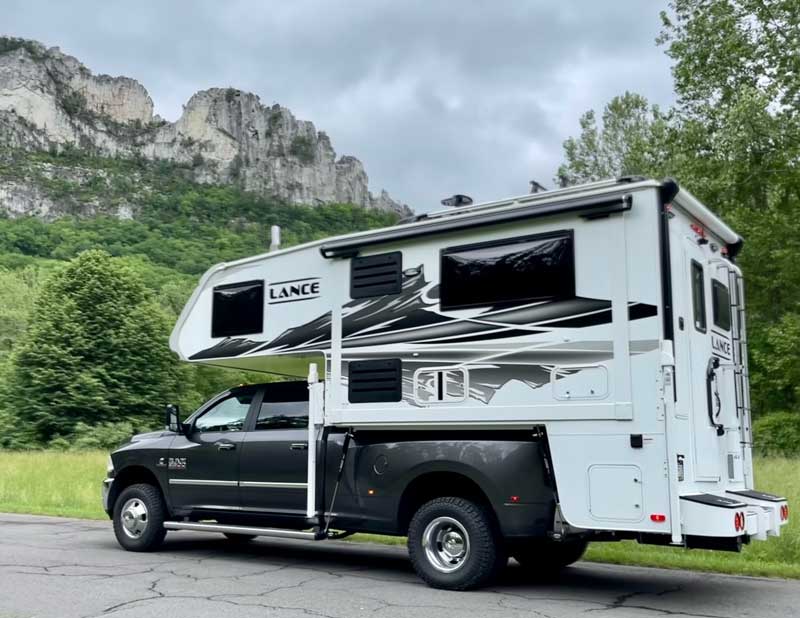 We decided to take an extended weekend to do a via ferrata near Seneca Rocks, West Virginia. That plan happened to fall through but we used the time to explore the surrounding area, which included a hike (you could climb) to the top of Seneca Rocks. This picture was taken from the auxiliary parking area at the trailhead. 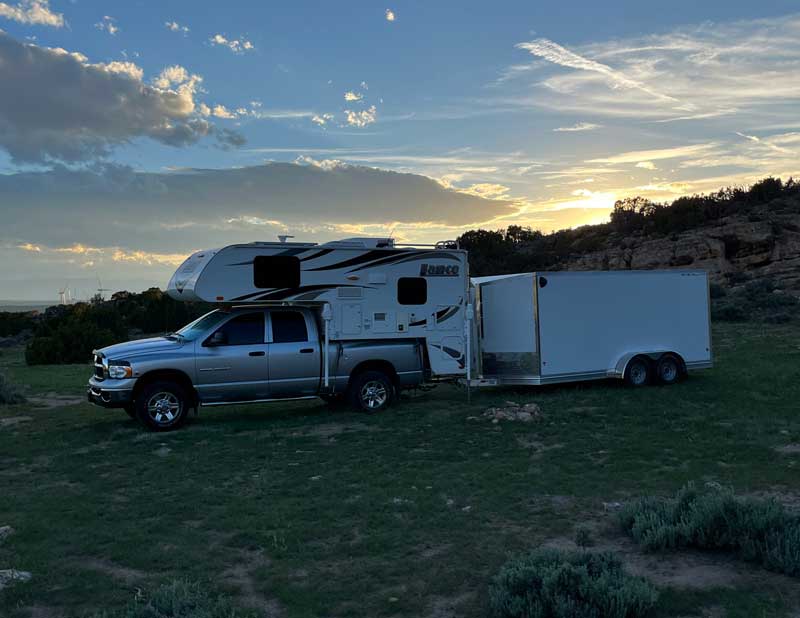 This was our maiden voyage with our new to us truck camper. I put a lot of elbow grease into cleaning, sealing, repacking electric jacks, adding 100-watts of solar and other miscellaneous items. For many years up until 2022, we pulled a 2006 Holiday Rambler toy hauler with our 2004 Dodge Ram.

It was a great camper and it served our purpose well, but my wife and I are now empty nesters and I wanted more versatility. That included the ability to transport our Honda Talon and have loads of extra storage and less overall weight. The truck is somewhat of a unicorn in my opinion as it is equipped with the near bulletproof NV5600 transmission and 5.9l HO Cummins engine. With only a tick over 35,000 miles, it should last a very long time. 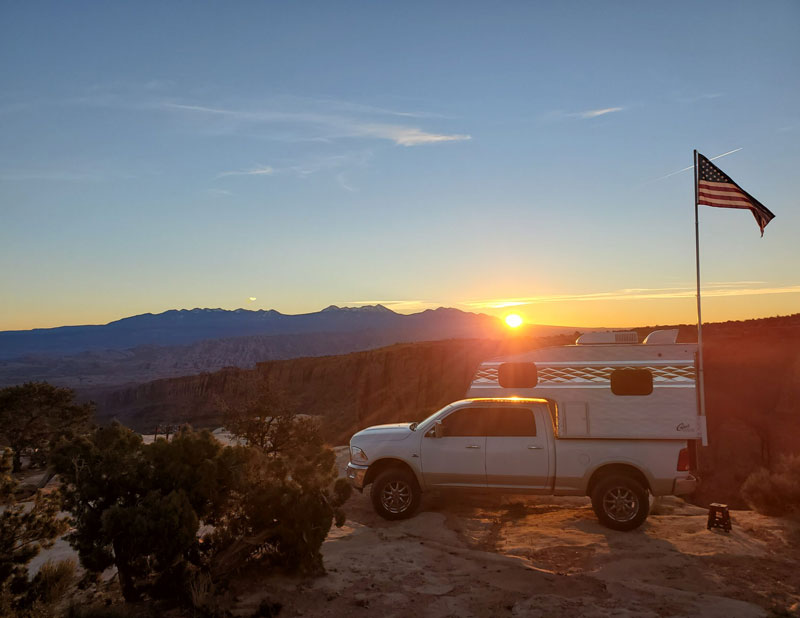 During our annual jeep trip to Moab, we were camping just outside of Canyonlands National Park overlooking Arches National Park. I was lucky enough to wake up early one day to get this awesome sunrise shot! 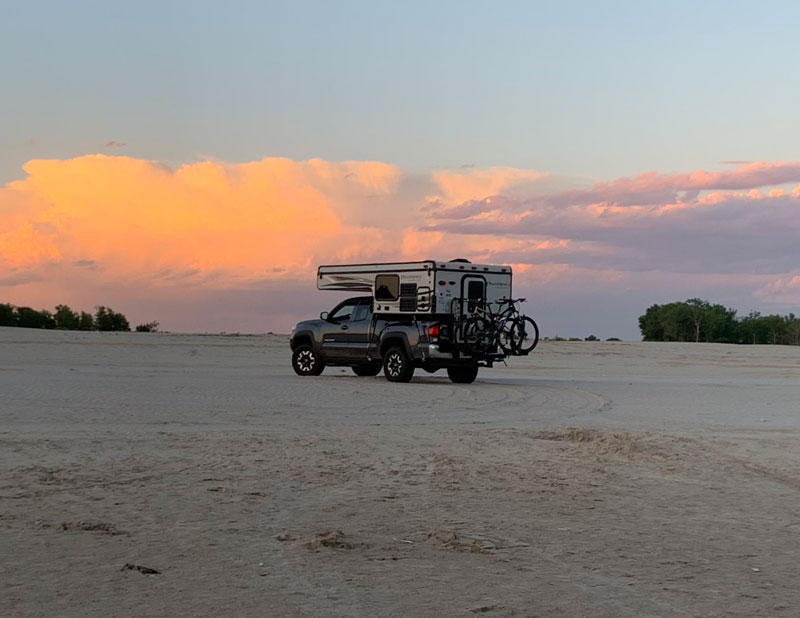 I was traveling from Colorado Springs to Wisconsin. I decided to stop at Lake McConaughy to spend a day on on the water before making the long drive east. As I rolled into the park right at sunset I noticed those huge thunder clouds in the horizon. They began to turn pink and orange as the sun set and framed my truck camper beautifully. 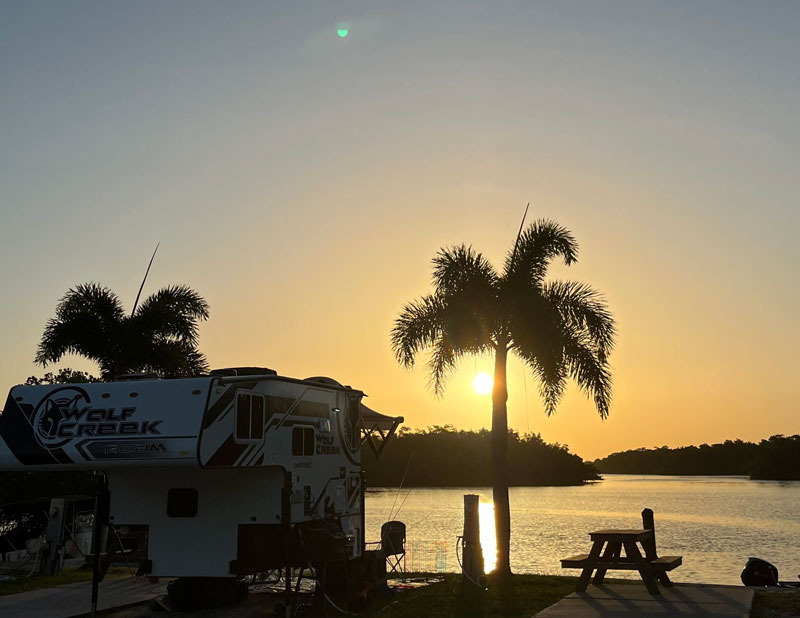 This was taken in Fort Myers, Florida at San Carlos RV and Islands. We just happened to stop here on our inaugural truck camping trip from our home on Toledo Bend in Louisiana to the Florida Keys. This was our favorite stop on the journey! 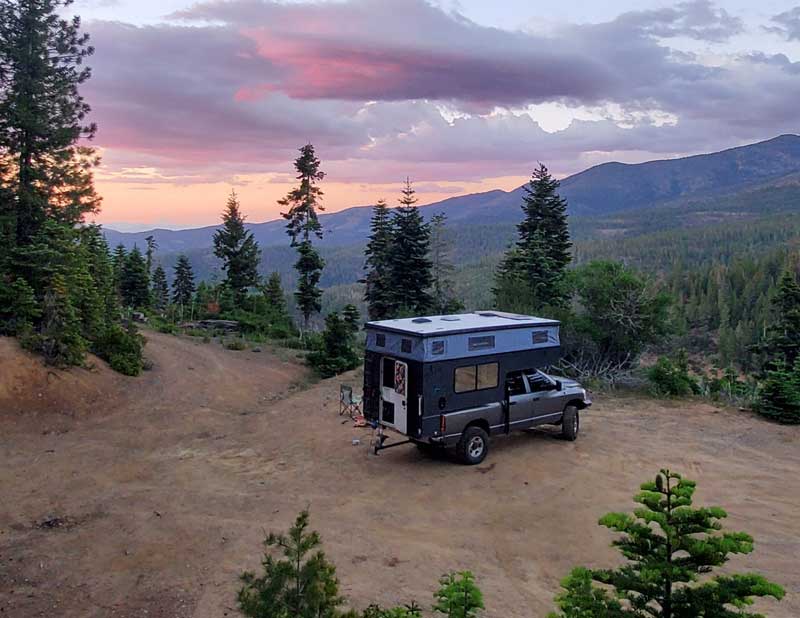 The location is a landing just under Kangaroo Lake outside of Etna, California. It was the golden hour just after sundown. 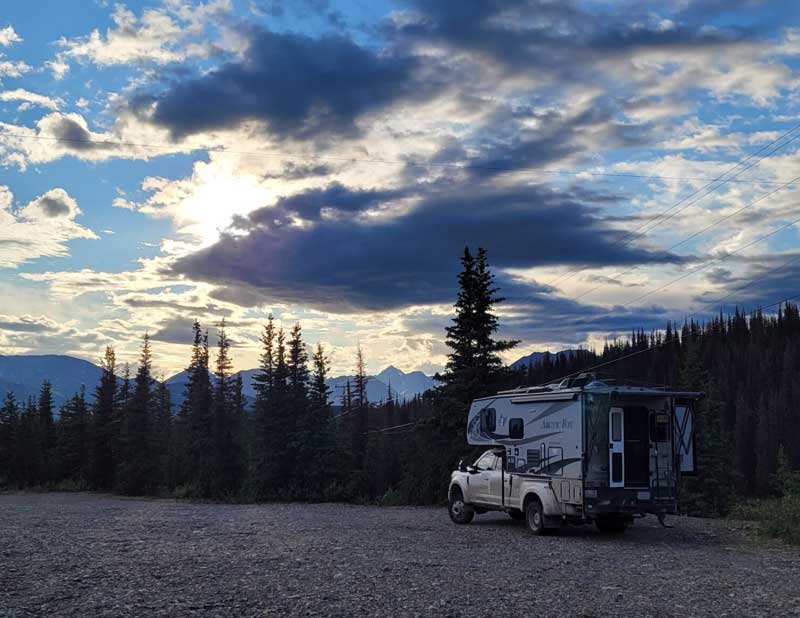 This is a roadside pullout for an overnight on the Denali Highway. It was about two miles east of Cantwell. It just finished raining for about 15 minutes. I took the dog out to do his business. The photo was taken about 9:00 PM in the evening. 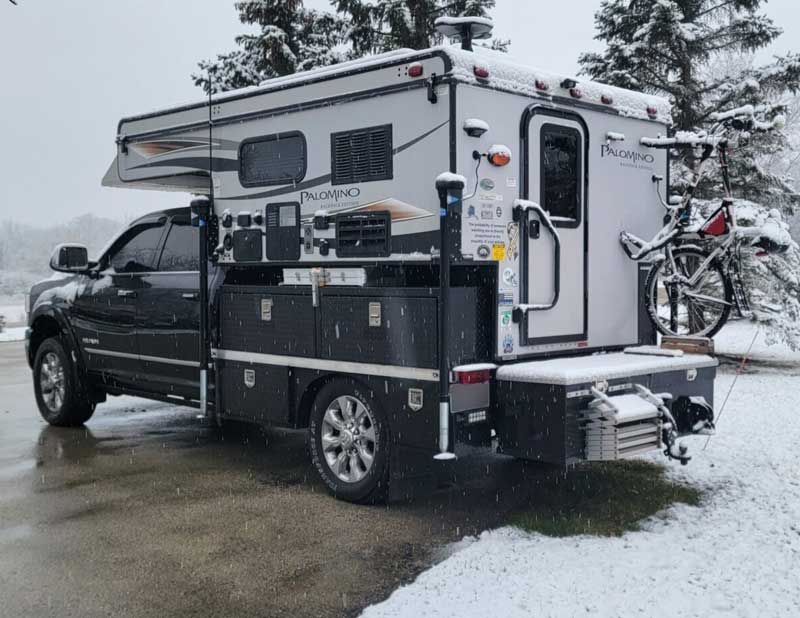 I came up from Florida on the way to Alaska. The Canada crossing was still iffy and then fuel prices headed to $8 a gallon up there. I decided to hang in Racine for the summer and continue restoration efforts on a classic car. This picture was of the last Spring snowfall. 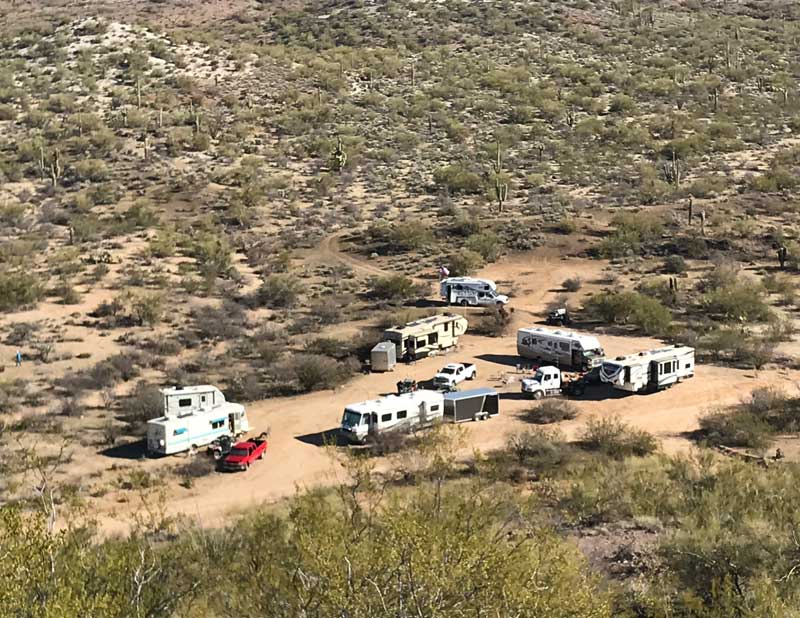 Over the last 10 years, we have met many friends who boondock and ride the deserts on the RZRs. We gather the last month around Wickenburg; some come and go during that month. 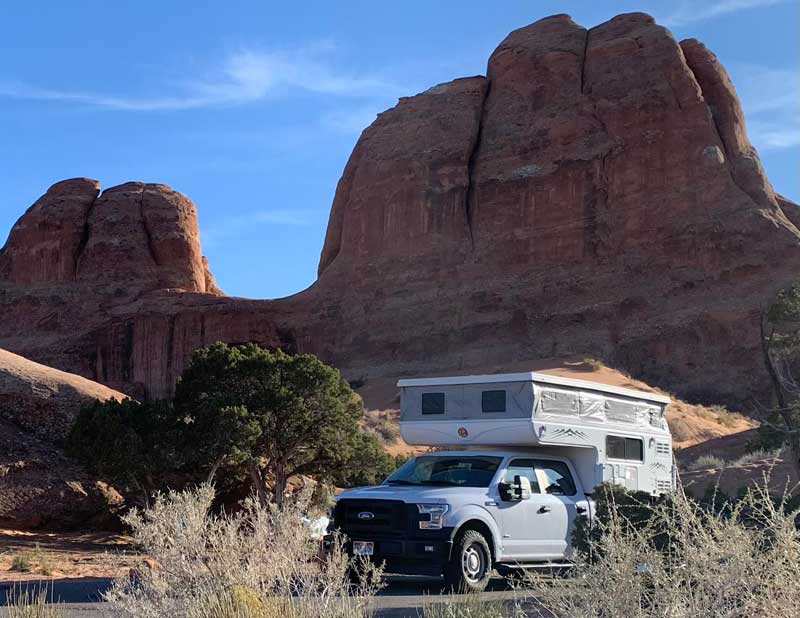 We live in Utah and it never gets old camping in this beautiful park.