For Behind the Shot Part 8, we are featuring photos and stories from Shiprock, Blaeberry River, Cape Lookout Lighthouse, Bonneville Salt Flats, and many more! 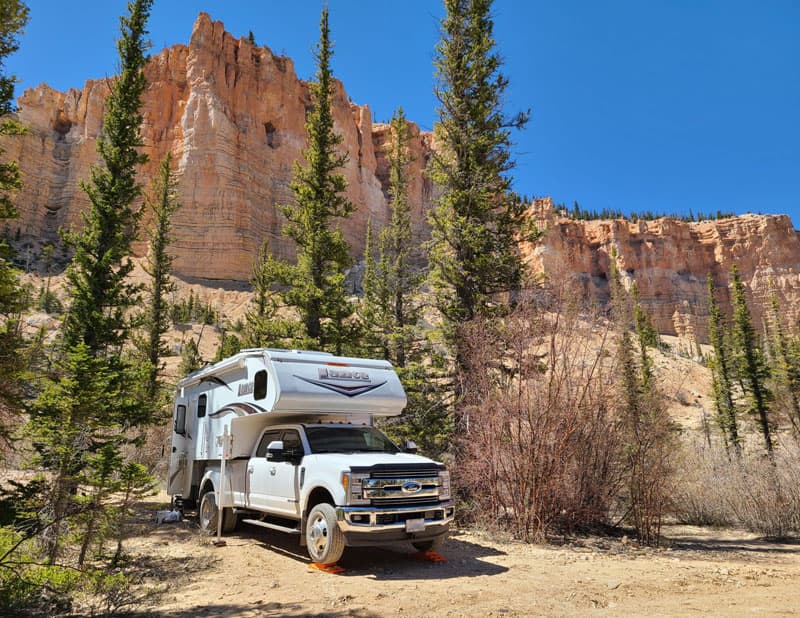 We were looking for a place to boondock after driving the Hell’s Backbone Road near Escalante, Utah, and saw some amazing canyon walls in the distance. I checked out the roads on my GPS and found some roads that took us to the right area.  Six miles of “interesting” road later, we found ourselves at the foot of the canyon wall. This is only about 15 miles from Bryce Canyon (as the crow flies), which is why it looks similar.

Once there, we got our rig level, and had a perfect spot to enjoy the evening and the next morning.  One other vehicle passed us, or was anywhere nearby, for the whole time we were up there. We’ve love to have spent another night there, but we had places to go and things to see. 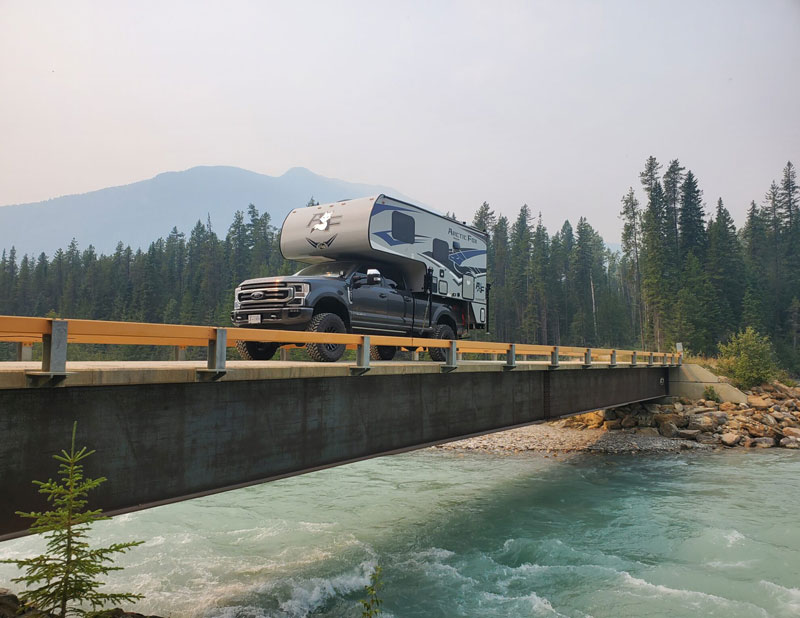 I just bought my new Arctic Fox two days before this picture was taken.  My camper has dual rolls to play being that it is my home away from home when I am in northern British Columbia working, and it also serves as the best way to get out and enjoy the beautiful places we have here in our province!

It is not very often that the whole family can make it camping, but this year we were able to in Golden, British Columbia.  Even my 83 year old mother came along.  This was taken on the way to where we all were camped.  Even though it was smokey from all the forest fires, we were all able to get together and enjoy each other and the beautiful scenery! 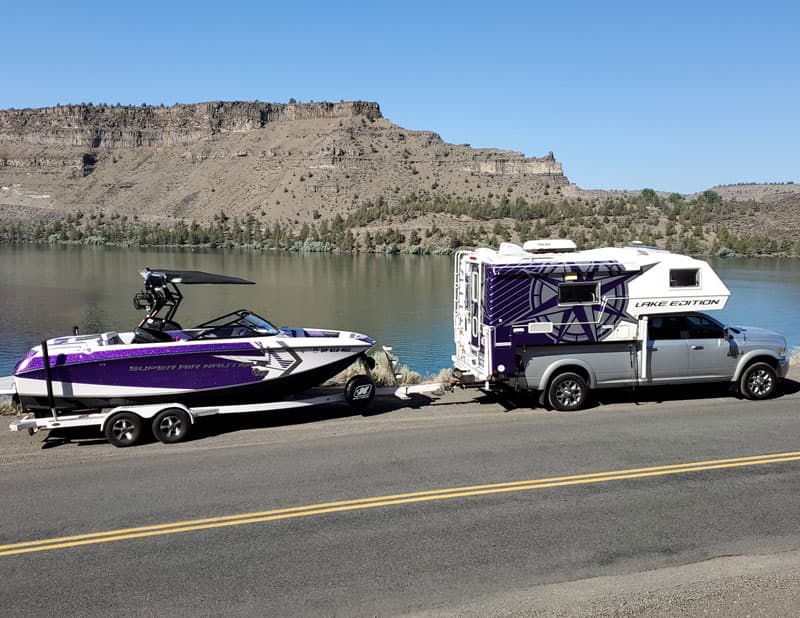 Lake Billy is known as three rivers in central Oregon.  I have been taking my family there annually for the last eight years and it never disappoints.  The water is always refreshing on hot days when we do water sports, Sup boarding or are on the beaches.  There are two state campgrounds around this lake and a private community beach and local marinas. A few offer rentals on house boats and two-tier pontoon structures with slides. It is a must go with family and friends and guaranteed to have a great time. 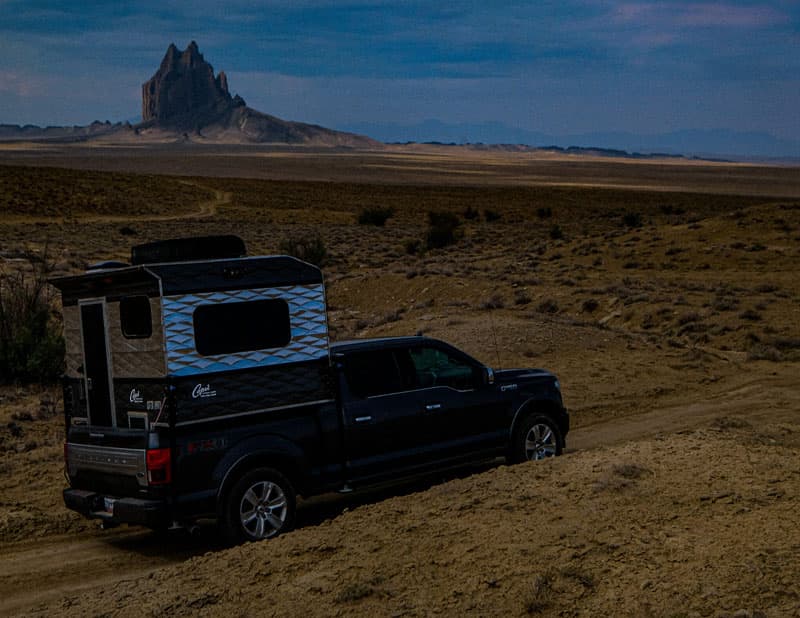 I was toodling around in the scorching heat of the desert, canyons and hoodoos of mid-east Utah when the Navajo Nations lands re-opened to tourists in July 2021.  I immediately headed south to Monument Valley and Hubbell Trading Post.  On the way  east through the Four Corners area, I was humbled to be in the presence of “Tse’ Bit’ a’ i “(“Winged Rock” aka “Ship Rock”). 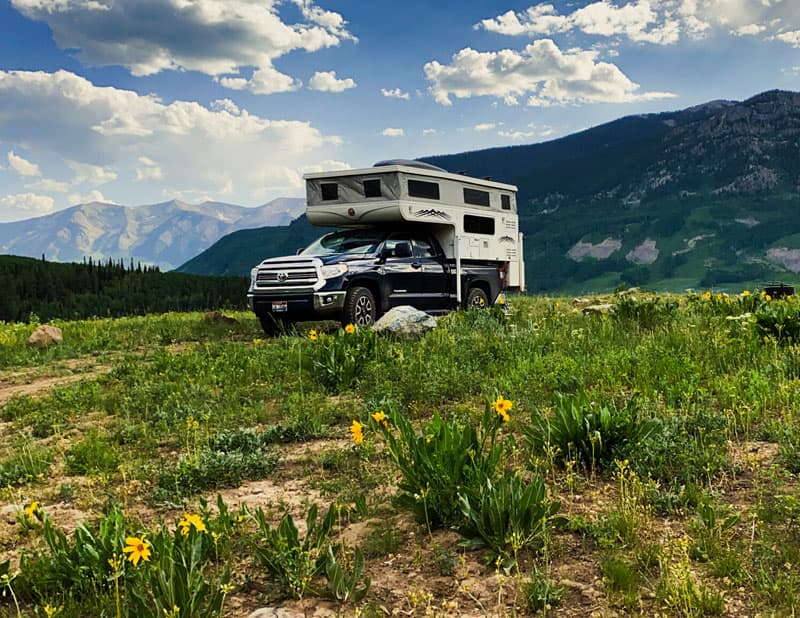 I was exploring Colorado on a six week 4,500 mile road trip. The sun was nice there. 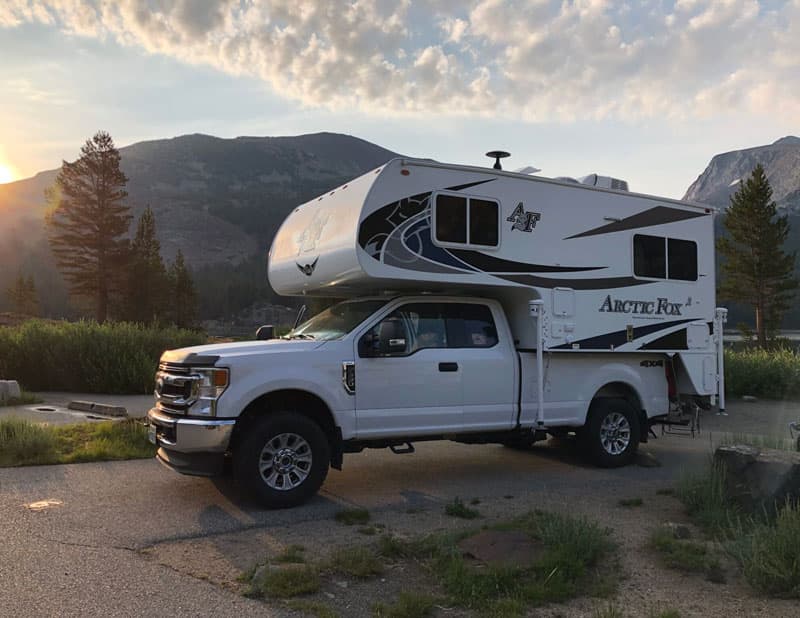 One of our favorite spots in the Eastern Sierra is Tioga Lake just outside the Eastern entrance of Yosemite.  It is a small campground with 13 spots and no reservations. The weather ranged from sunny to heavy rain on this day. 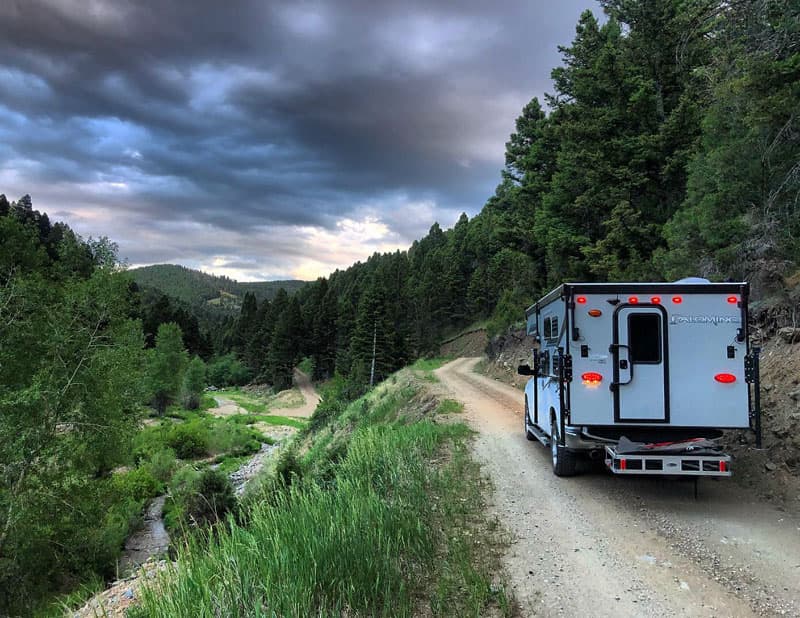 We decided to visit the historical Virginia City ghost town of Montana.  It is home of the Montana Vigilantes 3-7-77 and Gold Rush of 1863.  We decided to venture off the highway and explore Alder Gulch which was the location of the Gold Rush itself.  Today it can only be traveled via 4×4 truck over 20 miles into the Montana Wilderness. 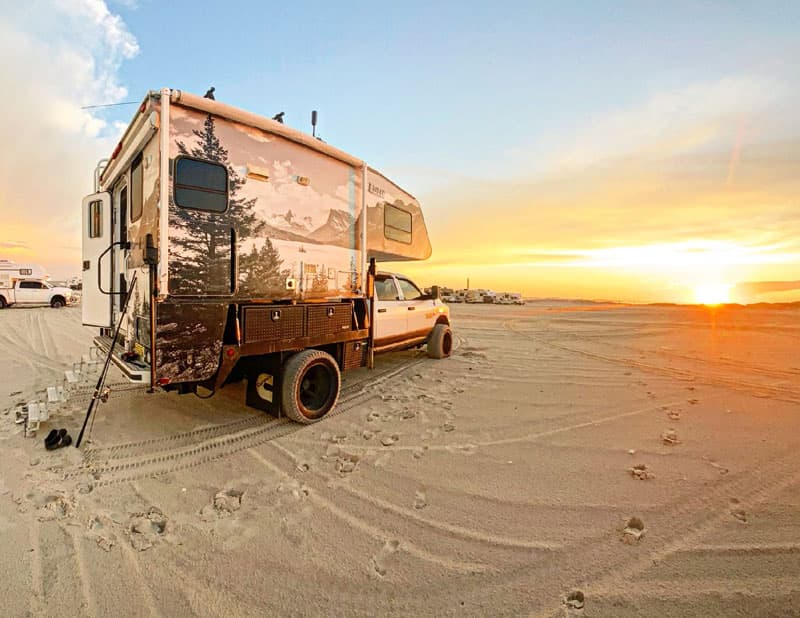 In typical Cummins Camper fashion, we were late and had hightailed it from northwest Jersey out to Island Beach State Park. After sitting in traffic, airing down our tires and a three miles drive on the sugar sand of the Jersey Shore, we made it to “the end” of IBSP.

As we were getting situated, I realized we were in the midst of the golden hour and the sun was starting to set on the horizon.  I quickly grabbed my new iPhone and took a couple of pictures from different angles.  This one took the cake. 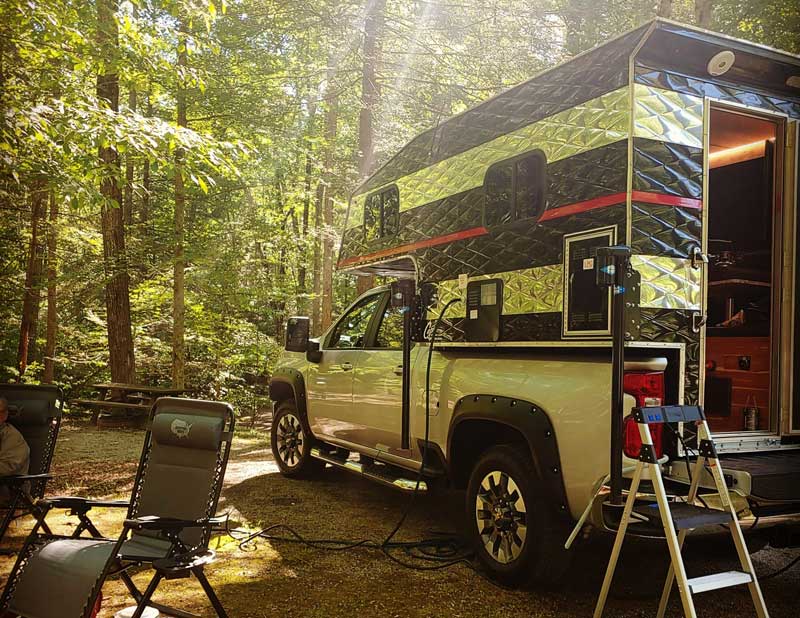 After a very long year, we decided to finally go camping somewhere (just to get away from all the craziness of work and health issues). We decided upon a place only three hours from home, but far enough away that we could clear our heads. This place is beautiful, friendly, and exactly what our family needed to reset mentally and physically. We loved it so much that we went back July 4th and had an even better time.

Random Facts About The Breaks: At many of the overlooks you are standing in Virginia but looking at Kentucky (on the state line). It is also known as the Grand Canyon of the South. 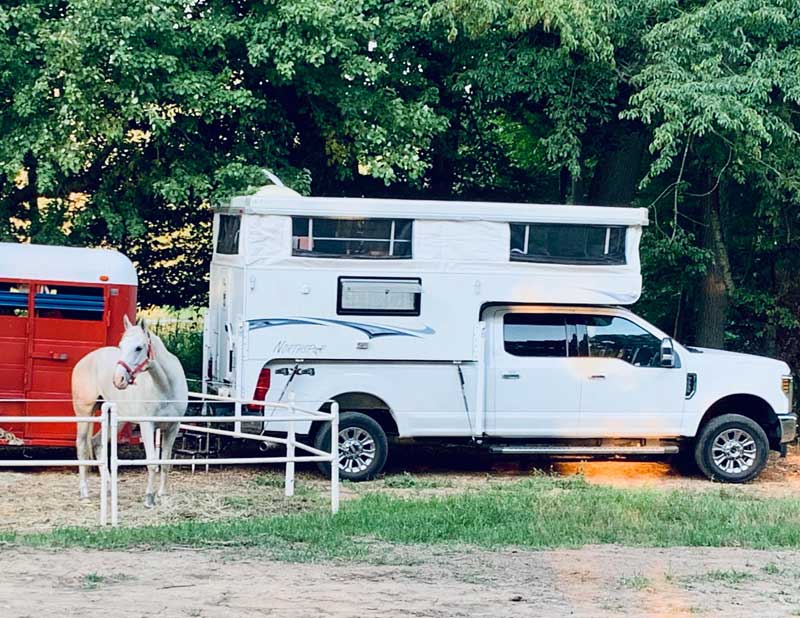 We love to horsey camp! Grove Point Stables in Earleville, Maryland is one of our favorite places! Elizabeth, the owner, offers primitive camping right on the water. It is like heaven! This particular campsite is on the water, so it is a picture perfect sitting with a campfire and the orange sun going down.  We were eating a fresh blueberry cobbler right off the fire from a cast iron pan (and don’t forget whipped cream).  It really doesn’t get much better than that!

This year we invited our friend, Kathy Shank.  This is her set up with her Arabian named Diamond. I took this picture early in the morning, just when the sun was coming up. All the horses were waiting for their breakfast. Later in the day we took the horses over to the beach and swimming in the Sassafras River which is a tributary of the Chesapeake Bay. 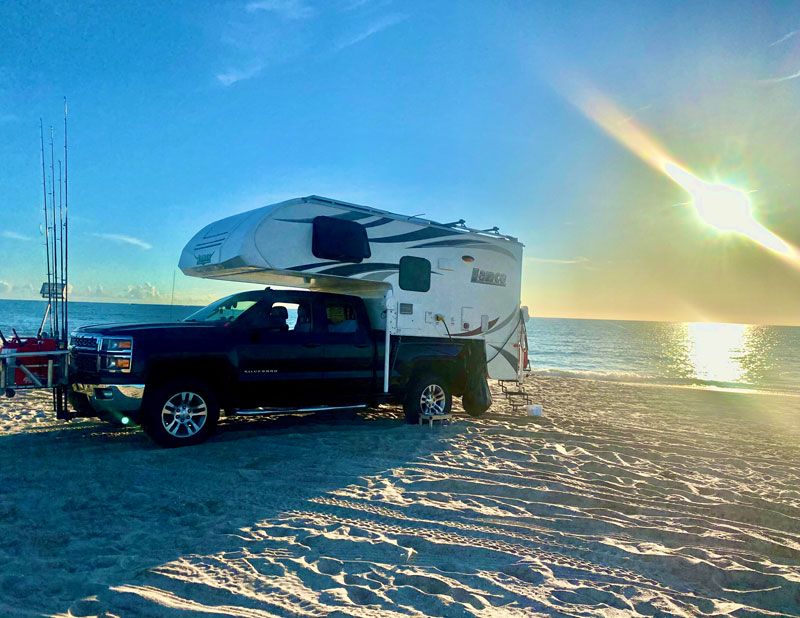 We were just getting ready to leave the island. It was my last day of vacation for 2020. 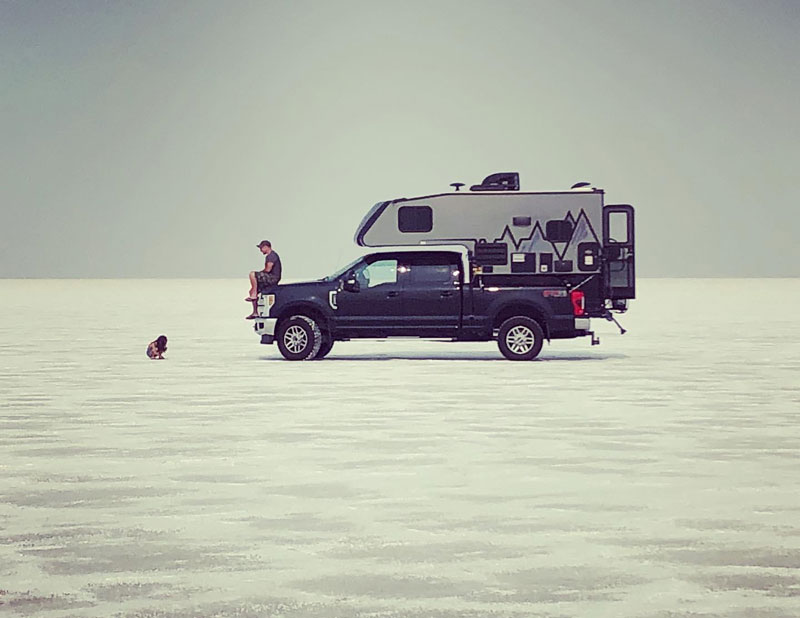 My family and I were on our way to California and couldn’t pass up the opportunity to drive out on the salt flats. 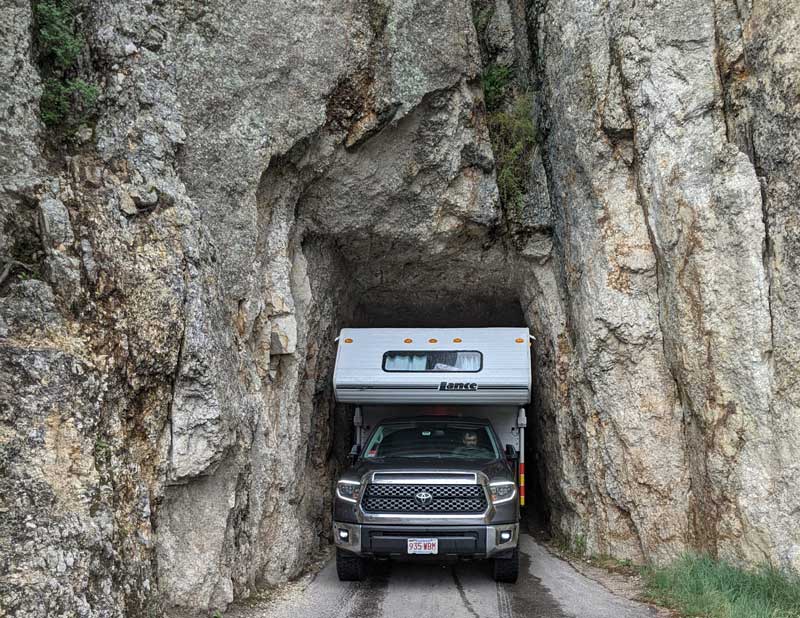 This was taken going through the needles eye tunnel in Custer State Park. 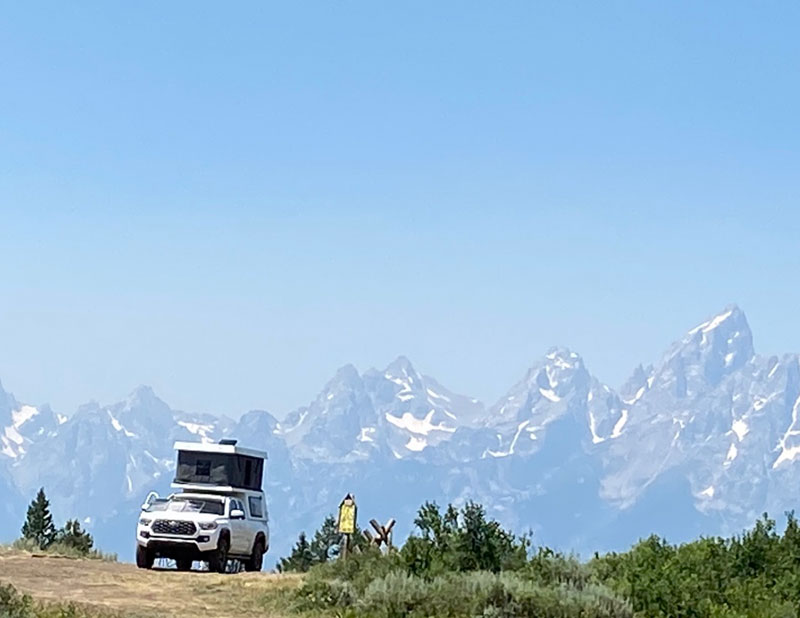 We found the last spot at the Upper View Campground and lucked out. The next morning we woke up to a moose walking around right outside our camper. 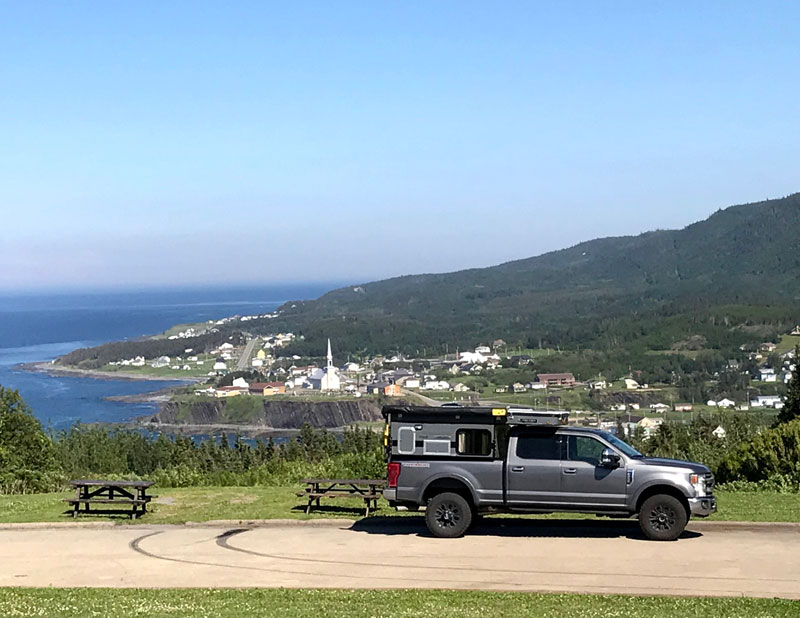 I had just retired and we purchased this truck and camper to be able to live the freedom of retirement. This trip was extra special as it was the first time we had been outside of our local neighborhood since all the pandemic lockdowns in Quebec and it felt wonderful. This was along the north side of the Gaspe Peninsula in Quebec and it was a big surprise that it was such a beautiful drive. 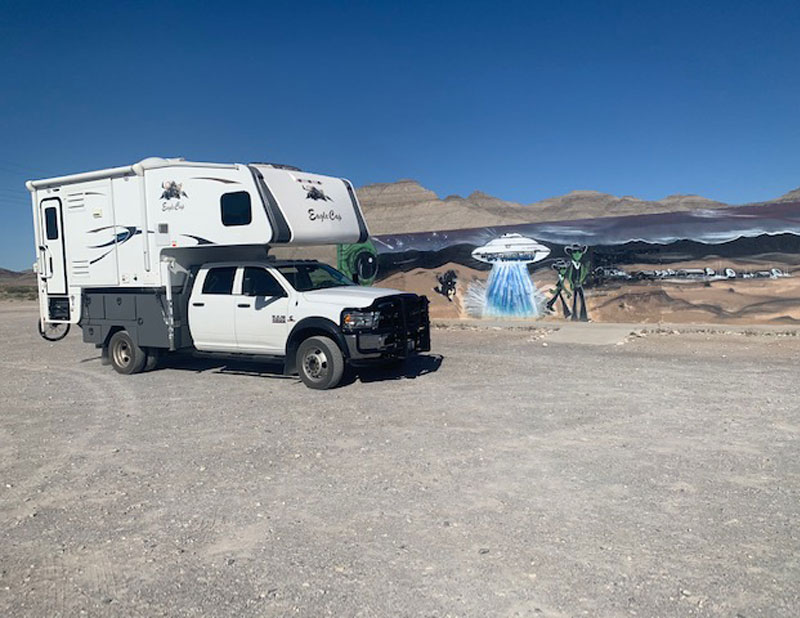 The start of the ET Highway close to Area 51/Groom Lake and some really good Jerky! 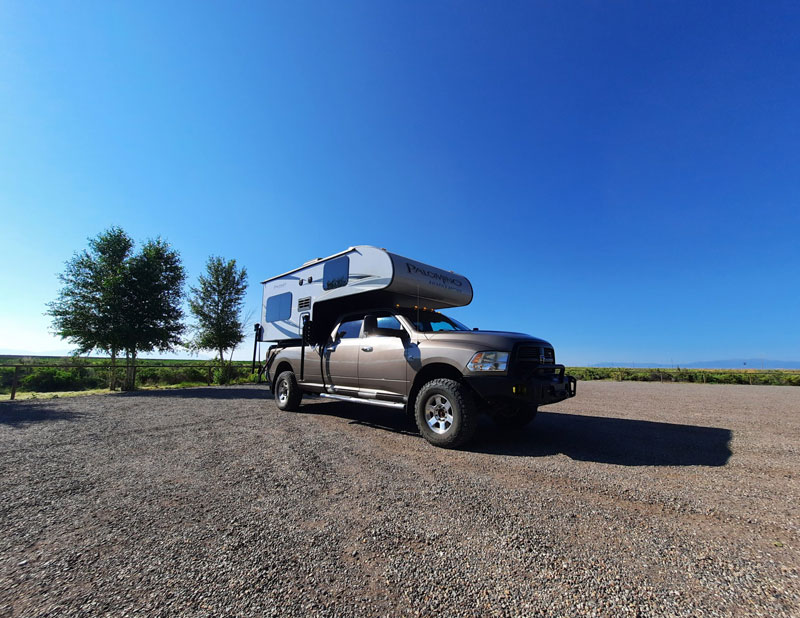 We took a trip from Colorado to South Dakota and this was a bathroom break on the way. That bathroom break introduced us to the excellent waterfowl at Russell Lakes State Park. 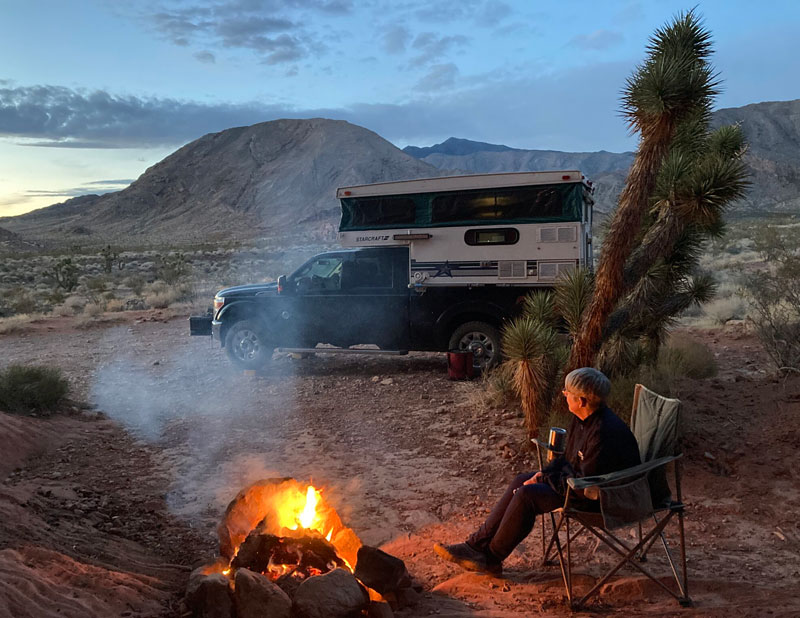 I was camped below beautiful rock formation in remote location of Gold Butte National Monument. It’s a hidden gem. 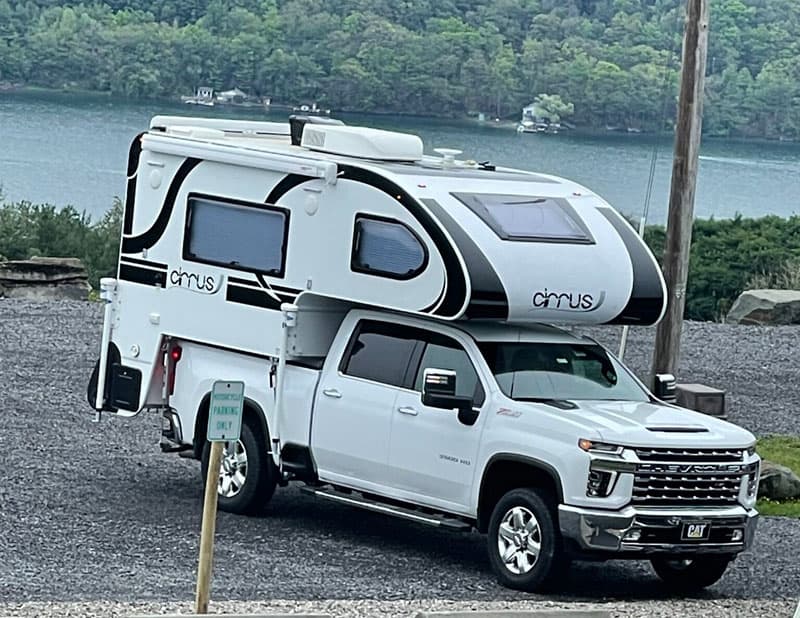 We did a wine tasting trip around the Finger Lakes. We used the Harvest Hosts app and found lots of places to boondock. 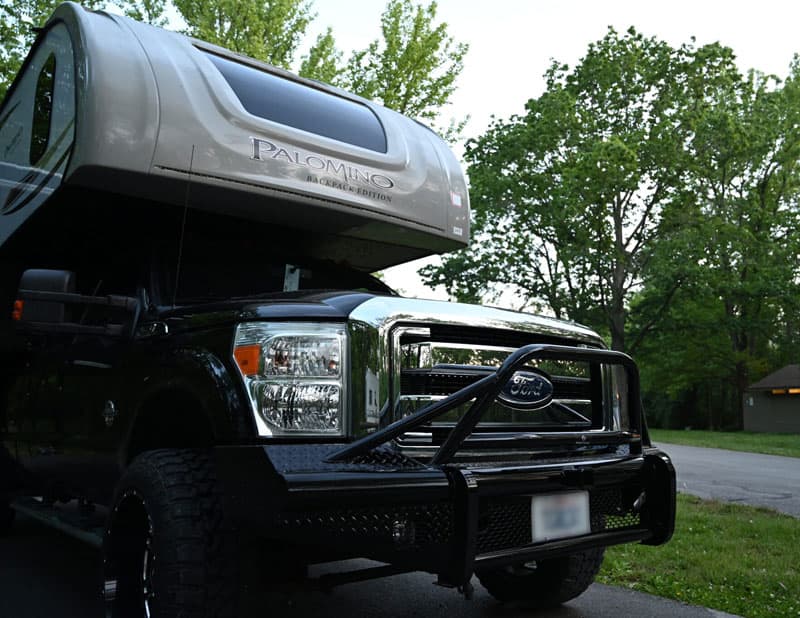 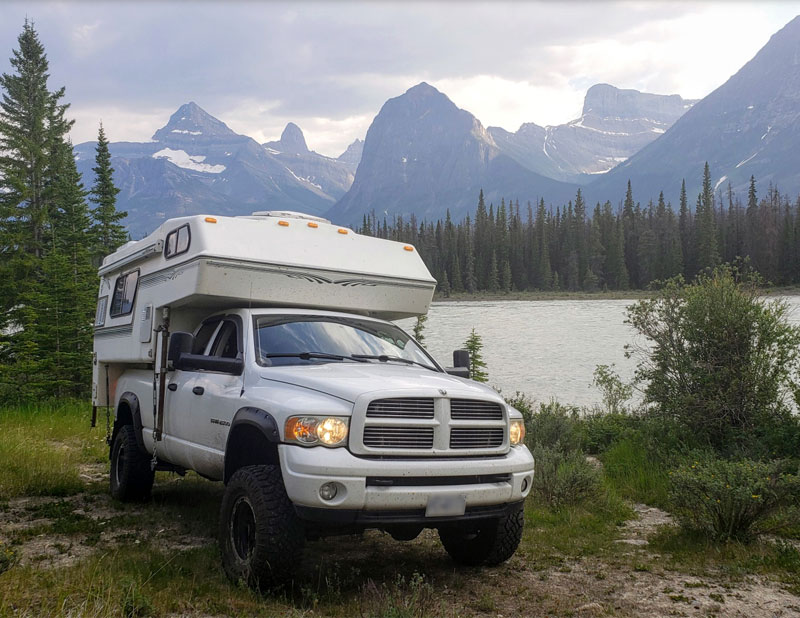 I’m in the Royal Canadian Air Force and just got transferred from CFD Masset on Haida Gwaii, British Columbia, Canada to Tinker AFB in Oklahoma City Oklahoma, USA. Our drive was 5,000 kilometers over ten days through the most beautiful country imaginable. My wife and I along with our two labs drove through Jasper, Banff, and Yellowstone just to name a few of the major parks. This picture here is beside a little lake in Jasper Provincial Park where we stopped for out two dogs to take a break from driving and have a swim. 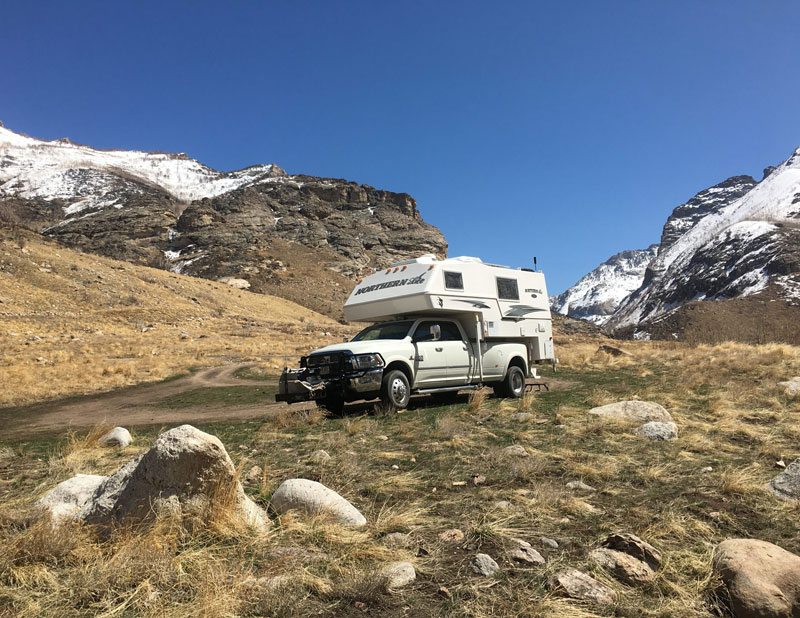 I found this free dispersed camping area near the Ruby Mountains in Nevada when I decided to detour off I-80 for some backroad exploration. It was early April so the Thomas Canyon Campground was still closed for the winter season and completely snow covered.

A few miles down the road, just west of the campground, I noticed another truck camper camped about 1/4 mile off the road along a good size creek.  So, I backtracked to investigate.  I’m so glad I did.

Not only was there free camping, but no one else was there since the other truck camper was just pulling out as I was pulling in. The morning views were amazing as the sun peaked over the partially snow covered mountains. This is the spot I landed.

There was a trail from my site leading down the short narrow path to the creek, so I could the flowing sound of water from my campsite. The night sky was glorious. It was still the winter season, so I nearly had the place to myself. The night air was nice and crisp and I had warm days in the 70s.