For Behind the Shot Part 2, we are featuring photos and stories from Alabama Hills, Black Rock Mountain State Park, and many more!  Click here to participate in the 2022 Truck Camper Magazine Calendar Contest and be considered for a Behind the Shot feature. 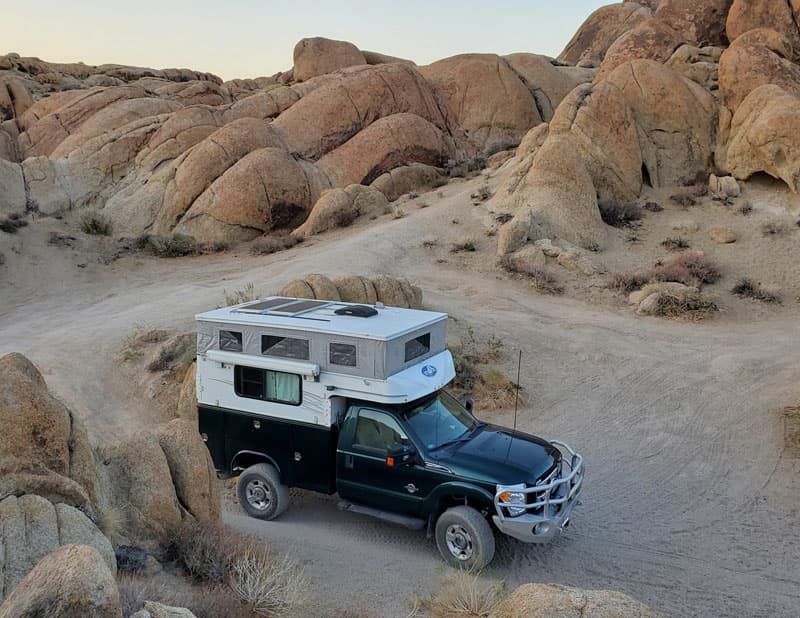 I pulled into one of my favorite campgrounds in Lone Pine, California only to find it full to capacity. On all previous occasions, I had my pick of campsites. I decided to take my chances over in nearby Alabama Hills. The Hills have become quite popular, read occupied, but I managed to find this spot back in the hills. It was a tight squeeze getting into the campsite, but I managed to get in, and more importantly, I was out at sun up the next morning. I hiked up the hill to take this shot just before sundown. 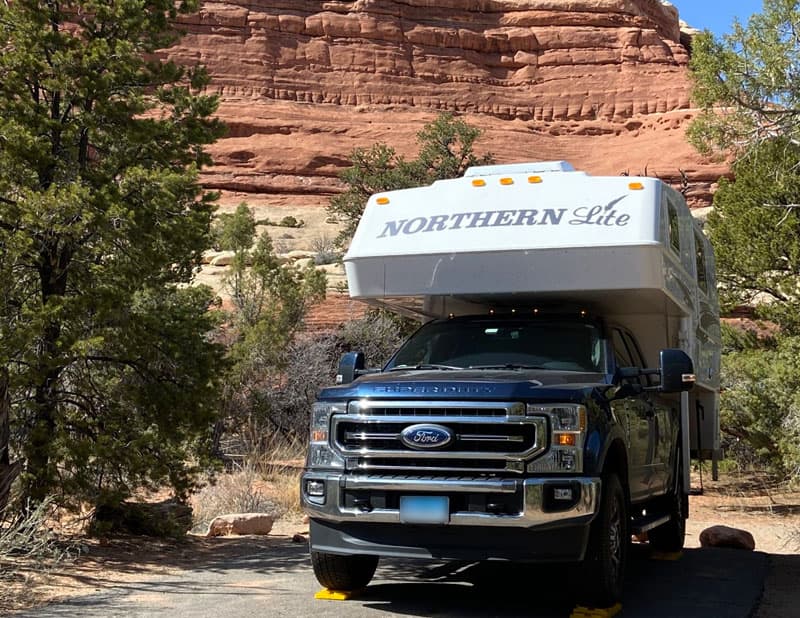 This is a first-come, first-serve camping area in the Needles District. After a serious navigation area that put us on the west side of the Rockies, a short drive to Canyonlands landed us the best campsite in the campground. Timing is everything! 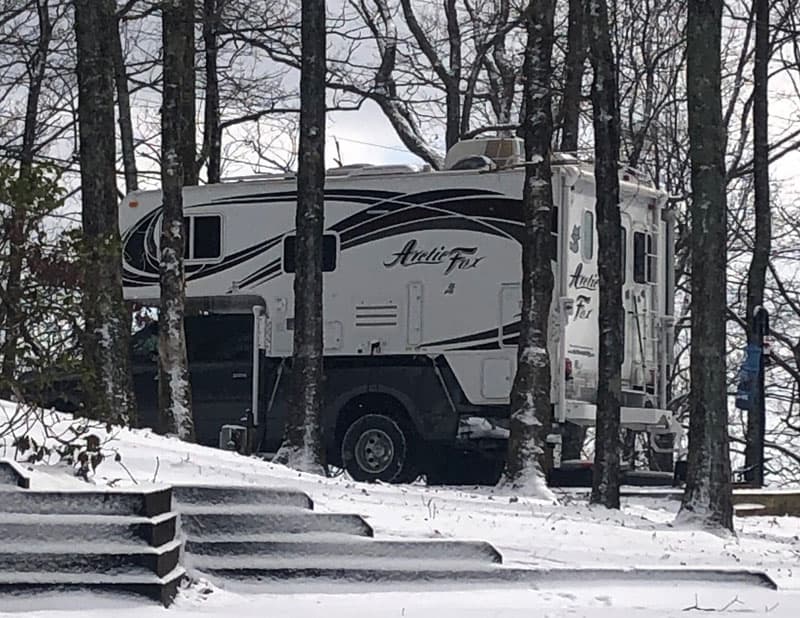 My daughter decided she wanted to get away for a few days, preferably in the North Georgia Mountains. So, even though snow was in the forecast, we booked at Black Rock Mountain State Park near Clayton, Georgia. And sure enough, it snowed on Christmas Day. Driving up the mountain was a tad nerve-racking as it is a narrow windy road and, of course, not de-iced. But, four wheel drive is amazing and we enjoyed a very quiet Christmas as very few campers wanted to risk the drive up. It was absolutely beautiful and we couldn’t have done it with anything else but a truck camper! 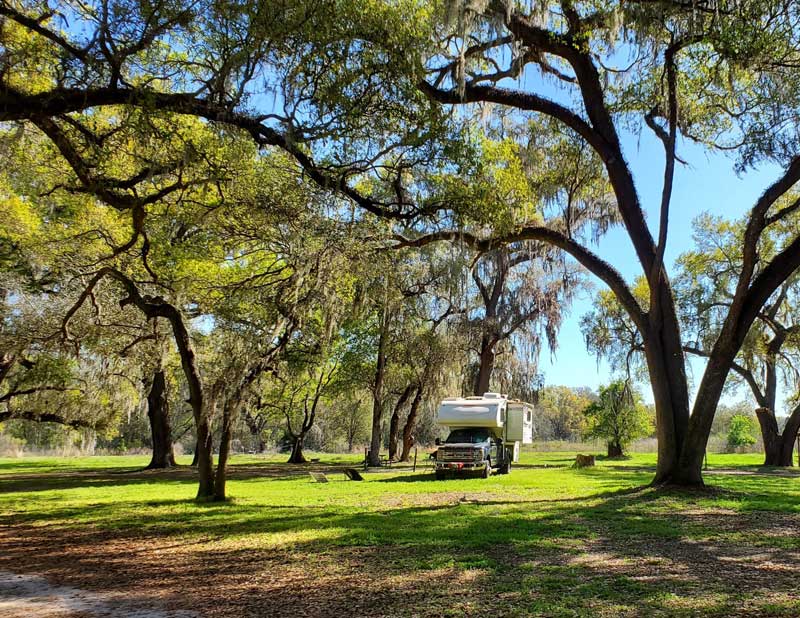 I spent two weeks visiting friends in the area so this was my hotel, only better. I know who’s been sleeping in my bed! 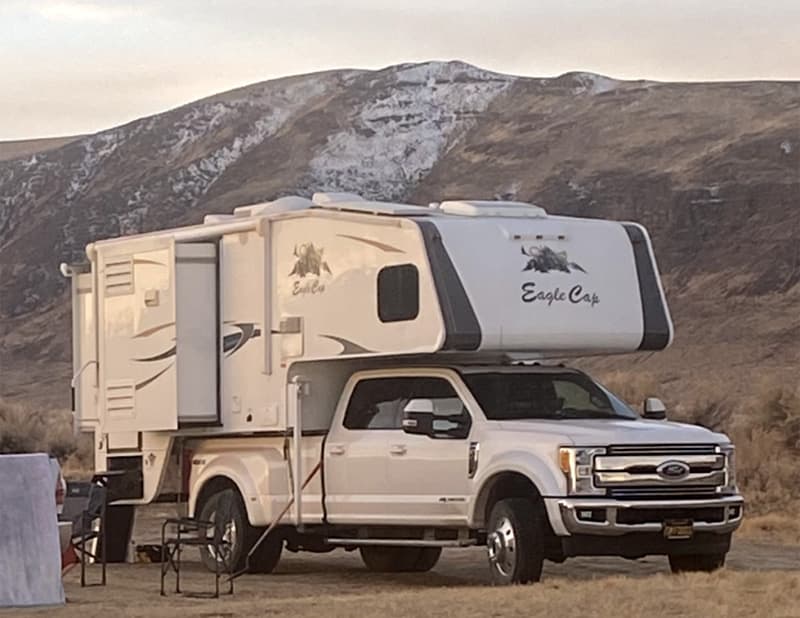 My wife, Marion, and I met our family out in the Black Rock desert at a hot spring to get in a little family time. It was a great weekend in our Eagle Cap 1165! 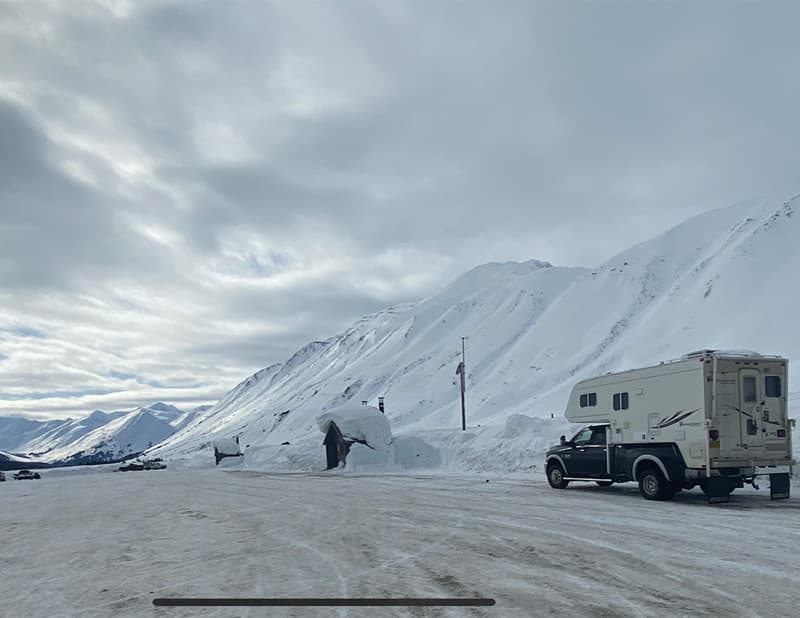 This photo was taken along the Seward Highway in Alaska. We were heading south of Anchorage to the sea town of Seward to hang out for a couple of days. This location is a rest area stop once on top of Turnagain Pass. It is a popular pull-off for the views along with snow machining the mountainsides in winter. This is also a great place to spot wildlife like moose and bears during the summer. 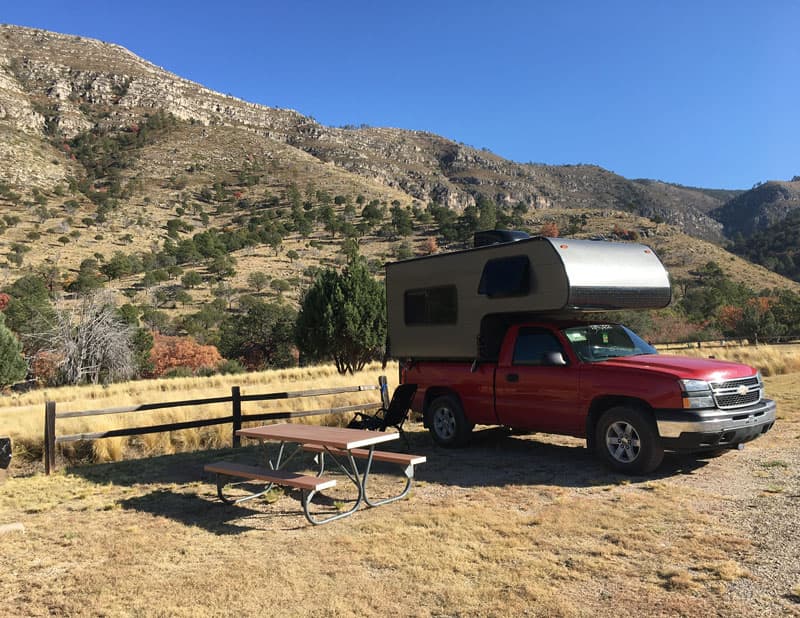 Four campsites are at the end of a 60-mile dead-end road. I was the only one there. Beautiful sky! Worth the drive! 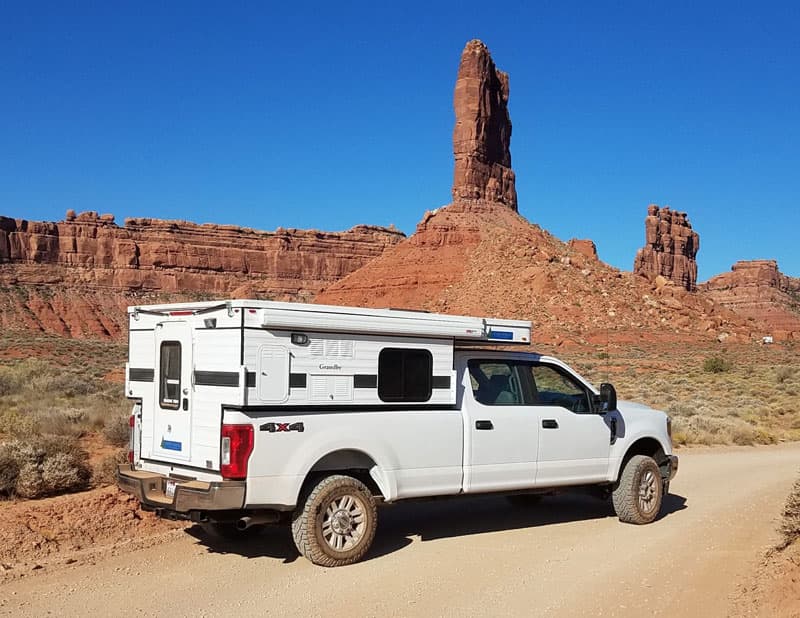 We were on a two-week overland camping trip in Utah. We visited Capitol Reef, National Park, Grand Staircase-Escalante National Monument, and Zion National Park. We drove every winding dirt road we could find! This shot was taken in Valley of the Gods. Instagram: @steve_price_la 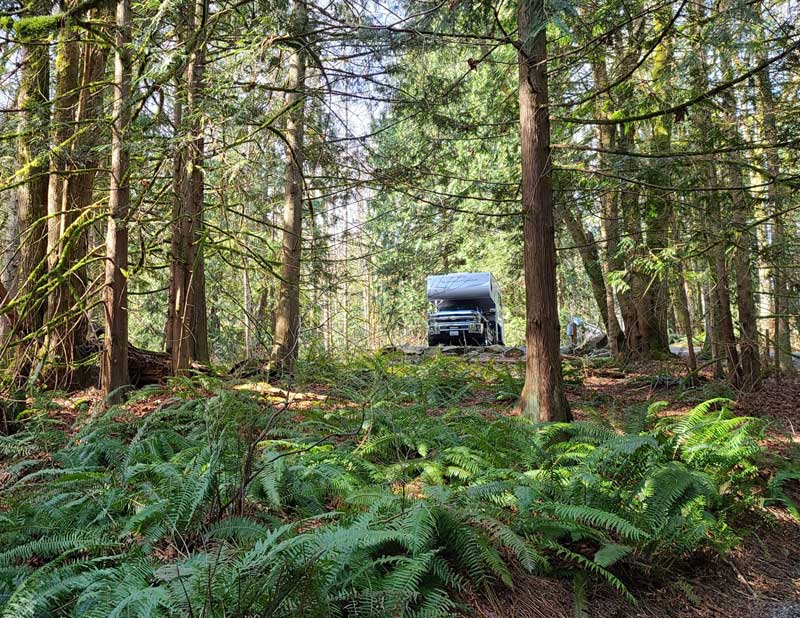 This was from our inaugural trip to a local spot. I was walking down a trail and turned around to take a look and snapped this shot of the truck and camper standing proud and happy in the forest. 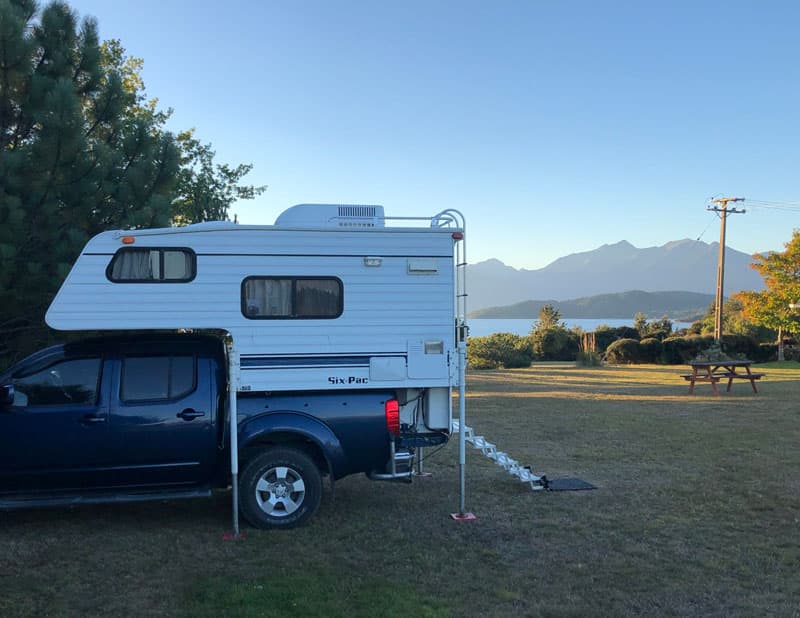 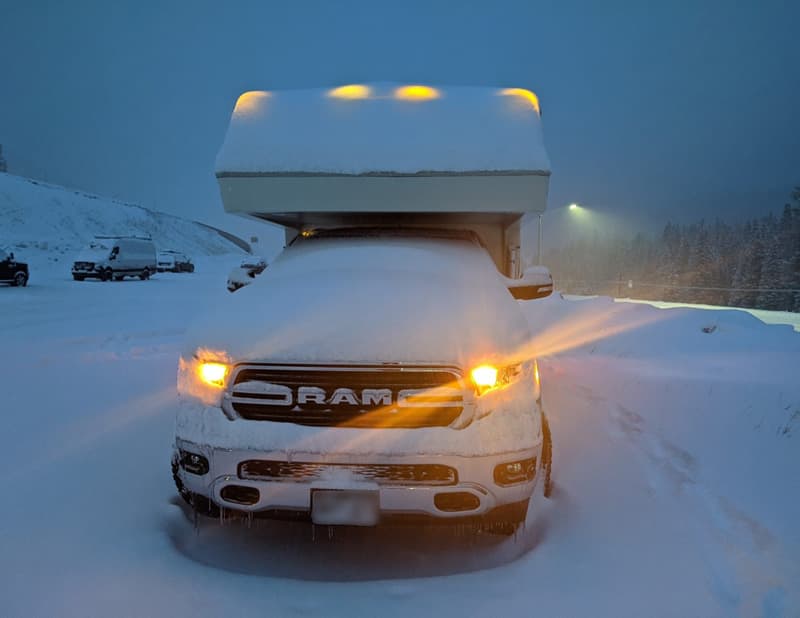 Naturally, when the weather forecast was calling for the largest snowfall of the year in Colorado, my wife and I decided to head up to the Loveland Ski area to take advantage of the fresh powder after a difficult year of reservation requirements at the ski resorts. We knew this would be a great opportunity to take advantage of hysterical news reporting and we headed up the night before and camped out in a lot by the resort. I snapped this photo after waking up in the early morning to avalanche control explosives being launched, and about 12″ of fresh powder. It was a perfect, crowd-less day on the slopes, and the new Ram made the trek back home through the blizzard with great capability. 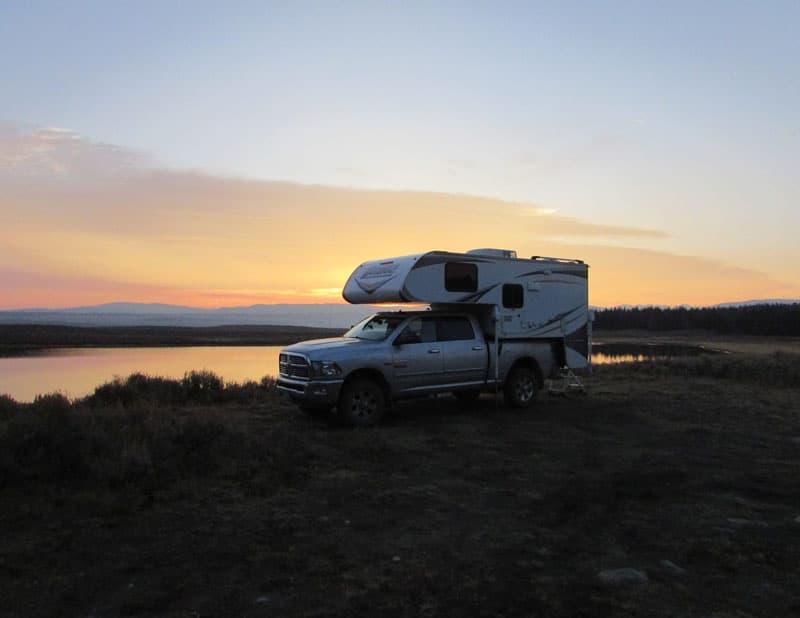 I enjoy my annual trip over Union Pass Road out of Dubois, Wyoming. I have camped at this spot a number of times. It is nice and quiet if the elk season is not yet open. Otherwise, there can be a number of Jeeps and ORVs growling about.

On this trip, I got to watch a bull elk travel through close to camp, a herd of cow elk on the far ridge, and a bull moose wander by. 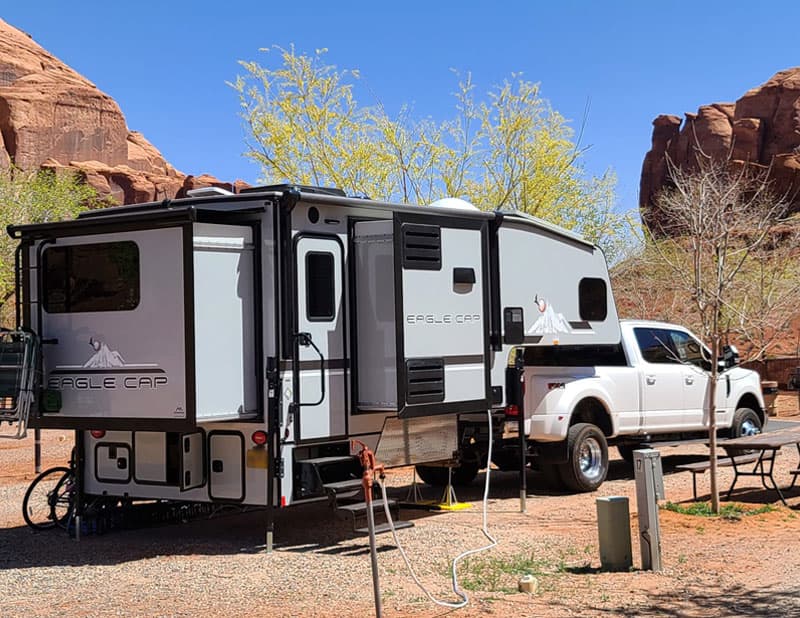 Camping at Goulding’s RV, I took the camper off so we could drive the truck around Monument Valley.