For Behind the Shot Part 8, we are featuring photos and stories from Bear Glacier, Antelope Island, Kring Point State Park, and many more! Click here to participate in the 2020 Truck Camper Magazine Calendar Contest and be considered for a Behind the Shot feature. 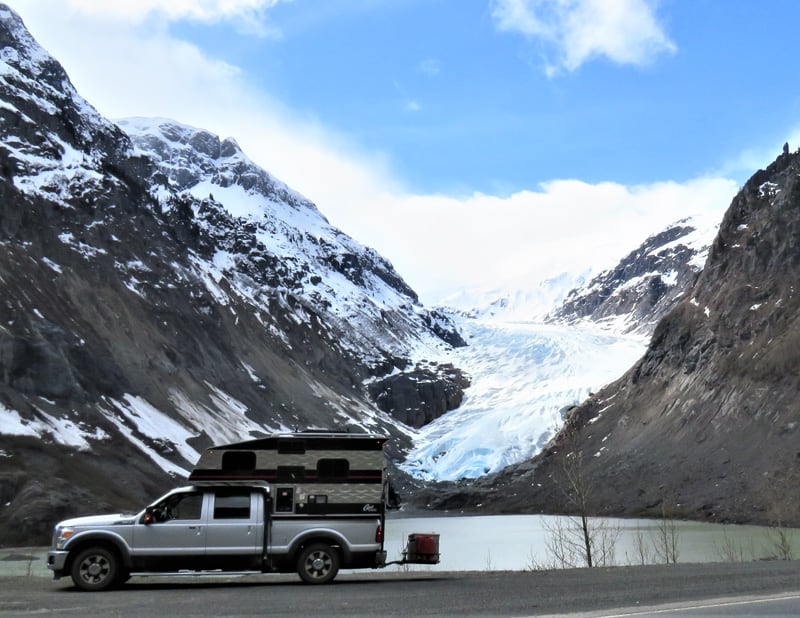 Highway 37A in British Columbia is probably one of our favorite get away spots. In this picture, we are parked in front of Bear Glacier. We have seen many bears in this area and beside the road between Meziadin Junction and Stewart, British Columbia. We camp in Meziadin Provincial Park and drive down Highway 37A for the beautiful scenery, glaciers, waterfalls, and our favorite find – bears! We have seen many grizzly and black bears with cubs on this road in the early spring and fall. 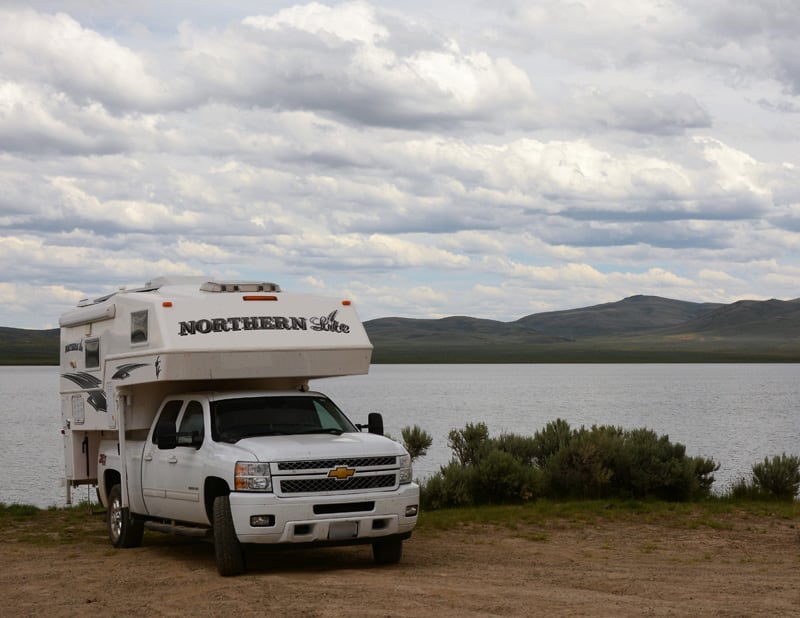 On our return trip from visiting friends in Idaho, we stopped at one of our favorite overnight camping spots, Antelope Lake in eastern Oregon. We were the only ones there this time, except for the variety of waterfowl and antelope. I missed the golden hour because we were out walking, but could not resist getting a few photos afterward. The sky and lake were gorgeous! 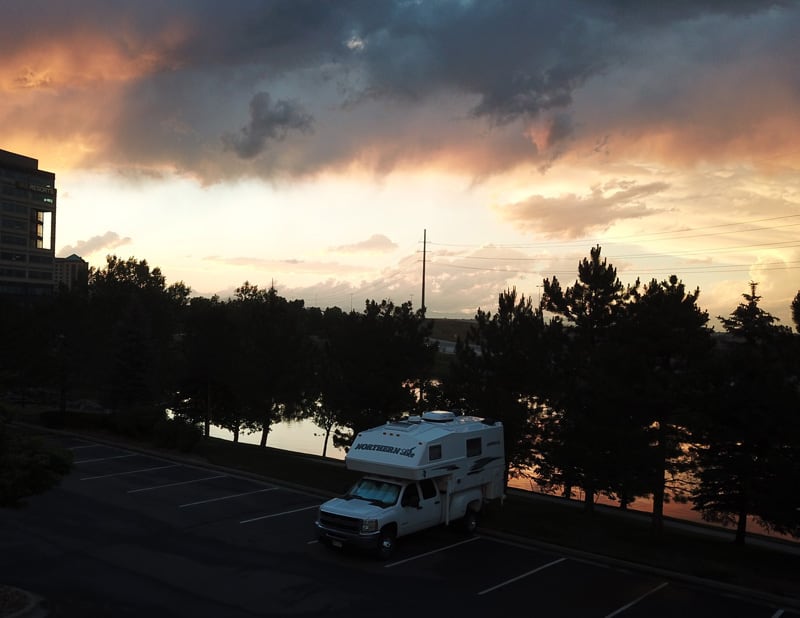 I live in my 2019 Northern Lite full-time. Work allows me to park at the office during the week and on the weekends I am free to enjoy the Colorado mountains. We have incredible sunsets every night. 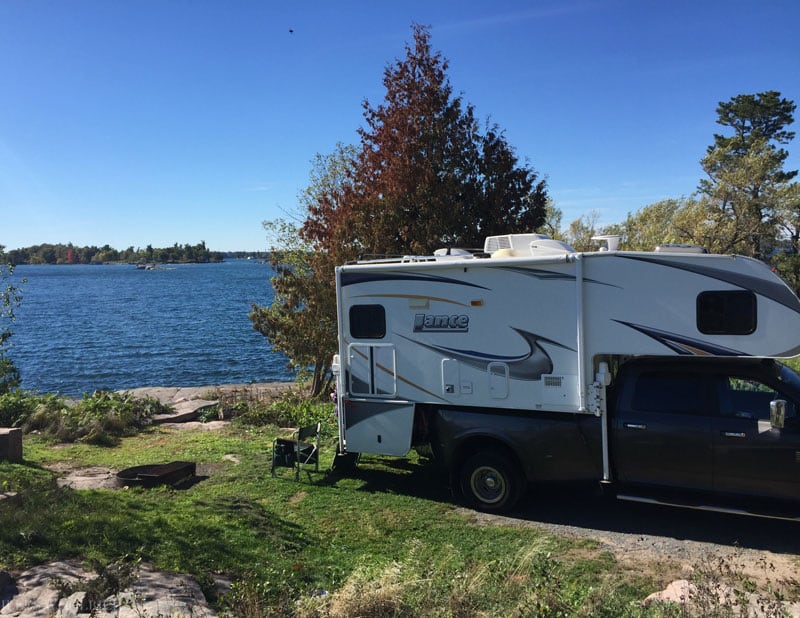 This photo is of the beautiful Thousand Islands looking at the St. Lawrence River. 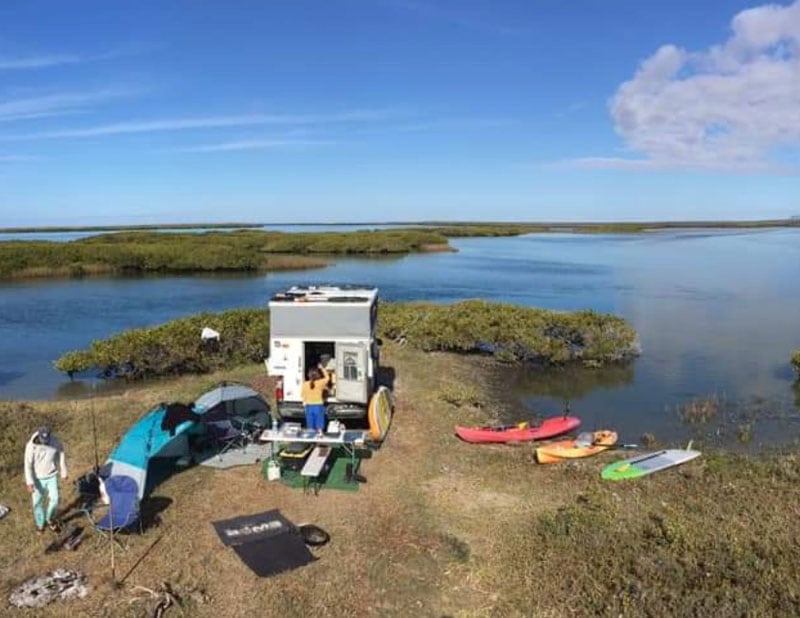 After searching southern Baja for over twenty-five years, I finally found my Shangri-La. It has very tough access because of title conditions, but there’s epic fishing. 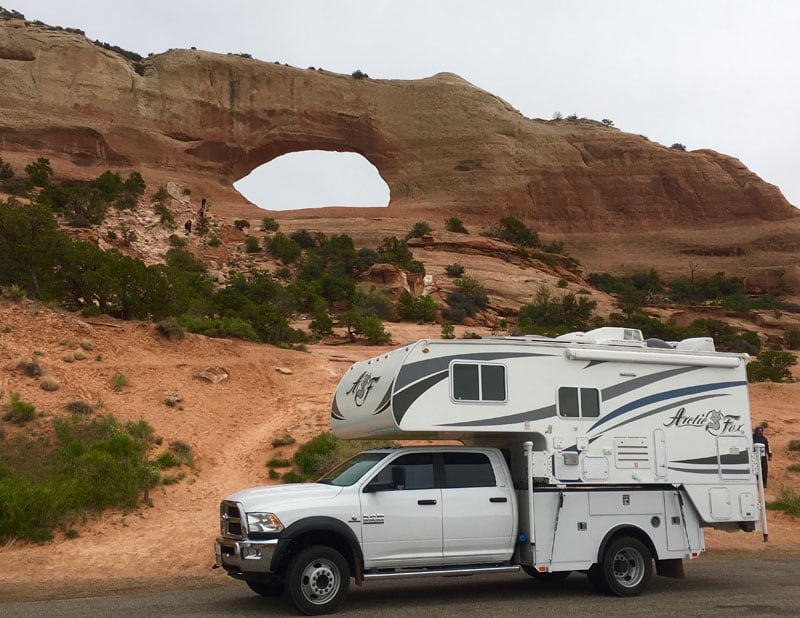 We were heading up to Moab, Utah on Route 191 stopping along the way to see all the beautiful rock formations. 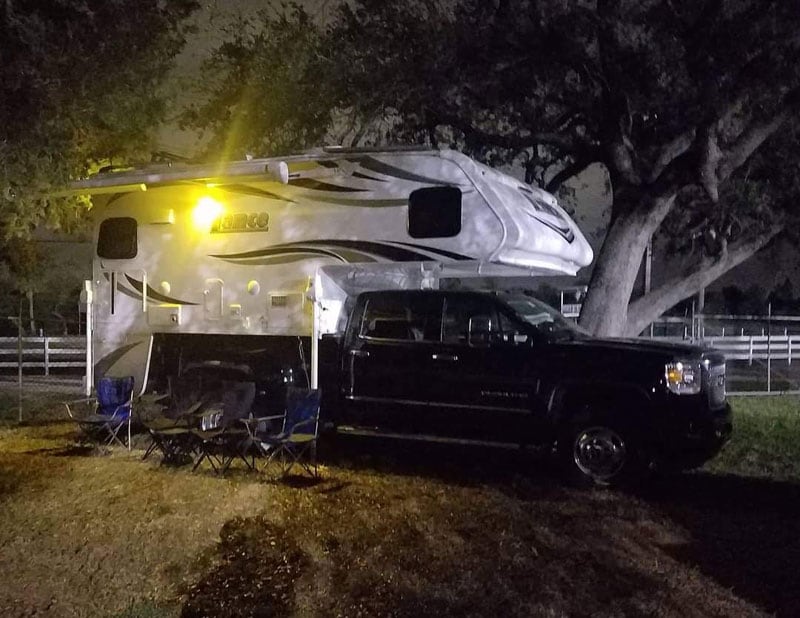 We are big time race car fans. While we were on a trip to Ocala, Florida, friends of ours called and said they’d be in Tampa. They were entered into the Dirt Car Nationals at Eastbay Raceway. Given the flexibility and freedom a camper provides, we pulled up jacks and made the two hour trip to the track. The track allowed RVs to camp overnight (no hookups). We were all set. This picture is of my Lance 975 at night after the main event. I like how the lights, the darkness, and trees all interacted to make a decent picture for a spur of the moment shot. 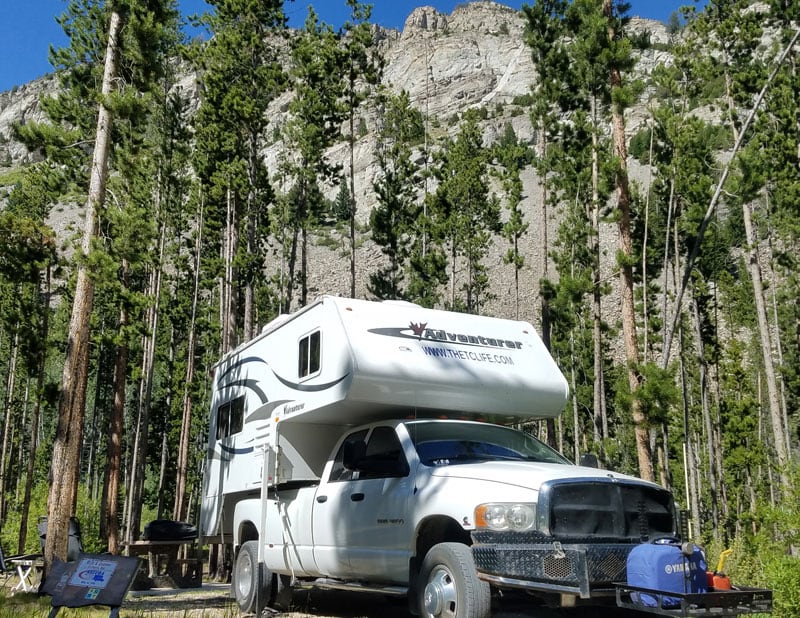 We made a quick trip from Spokane, Washington to Three Forks, Montana to check out a campground for a future rally. On one of the nights we knew a basic area we wanted to camp. We were not sure if we would camp at Lost Creek State Park, but wanted to go there to check the place out and find a couple geocaches. Once we arrived and looked around we decided to go ahead and stay the night there. The geology of the place was very interesting and pretty. On that summer day, the night temperatures were nice and cool since we were fairly high in elevation at the campground, around 6000 feet. 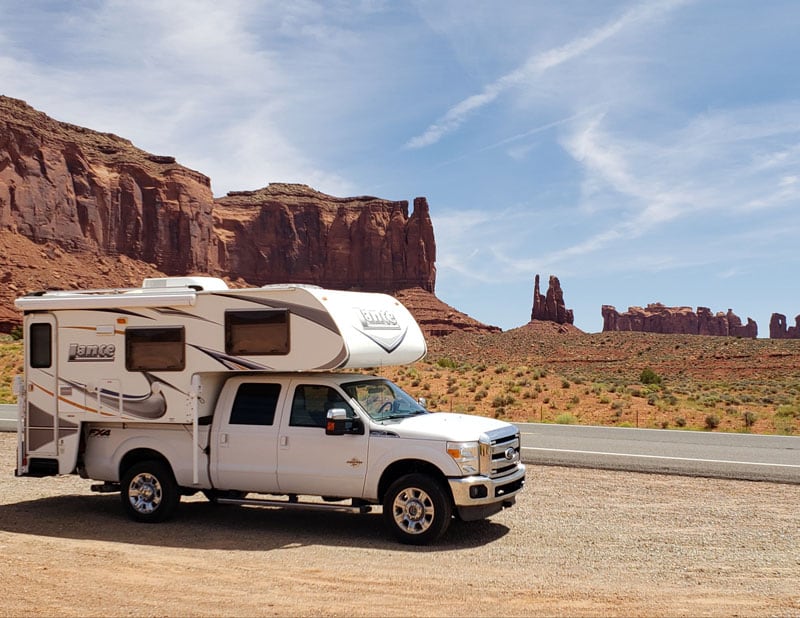 I remembered my father talking about Monument Valley when I was a child, and at the last minute we decided to swing through US163 in Utah and Arizona We were pleasantly surprised at the simple beauty of the rock formations in the area. We stopped along the road to take this shot. 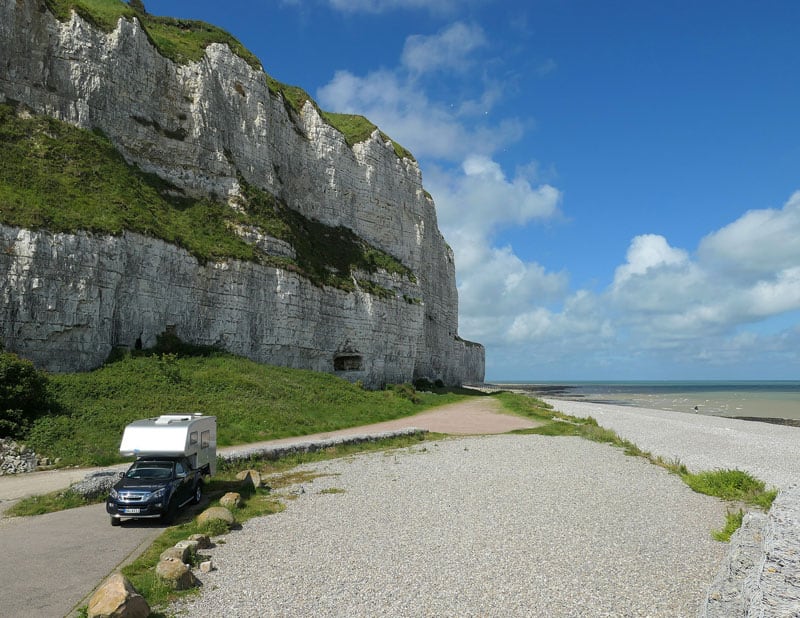 Here’s our favorite campground at the Normandy coast. It’s called St. Valery aux Caux. Nearly every year we make a trip to this region because beside of the fantastic landscapes with the White cliffs. We enjoy the great seafood, oysters and white wines of the neighbor regions. 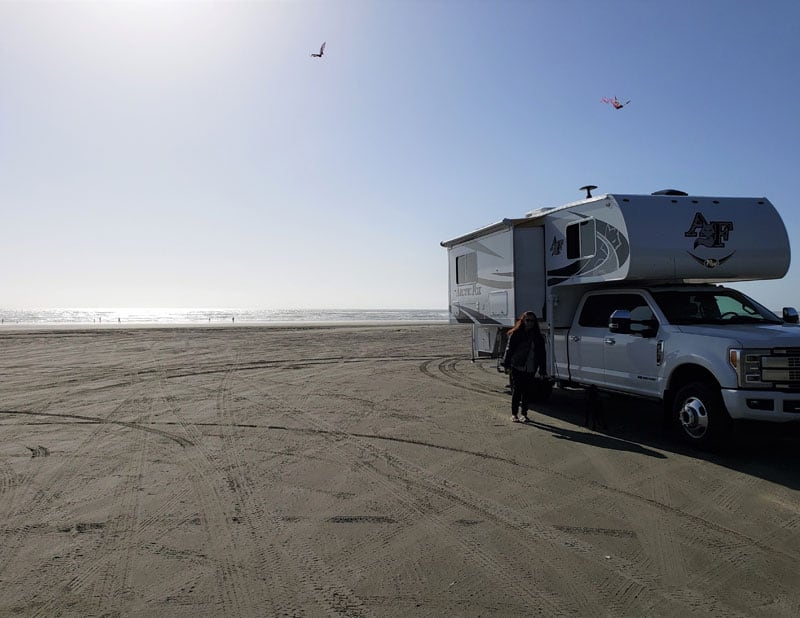 We had just purchased our camper at Apache Camping Center. After spending the night in the nearby Walmart parking lot, and continuing up the coast, we ventured out to the beach. After some protest from the other passenger, and getting out and walking on foot first, we ventured out with the rig onto the sand. Something about, “I didn’t buy a truck camper to sit in a campground” was said. So, there we were. The sand was nice and firm, so there was no need to air down. 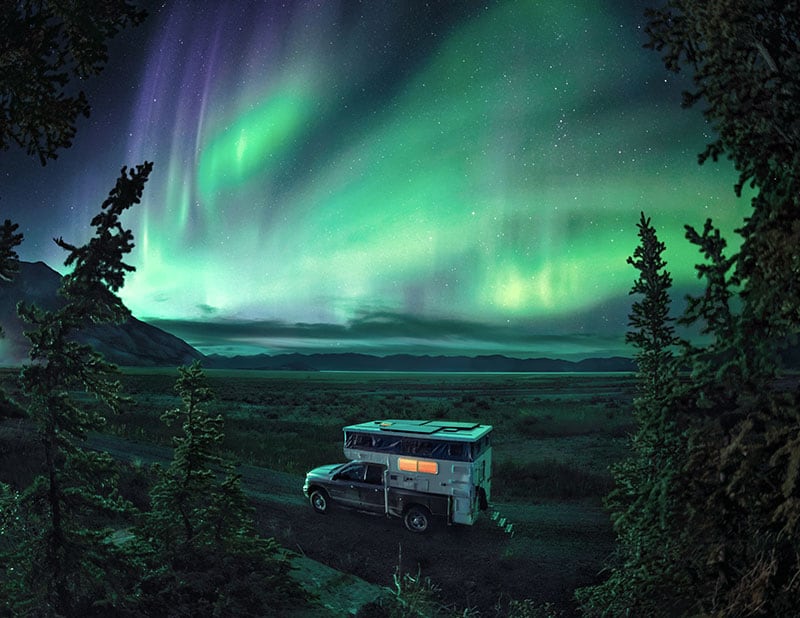 It was my first night in the Yukon Territories after a thousand miles of fires in British Columbia. I was greeted by a spectacular showing of the northern lights. No, they did not charge my solar panels and yes, it was cold. I climbed up on this small hill behind my camp and watched the show framed by a couple of scraggly black spruce trees. 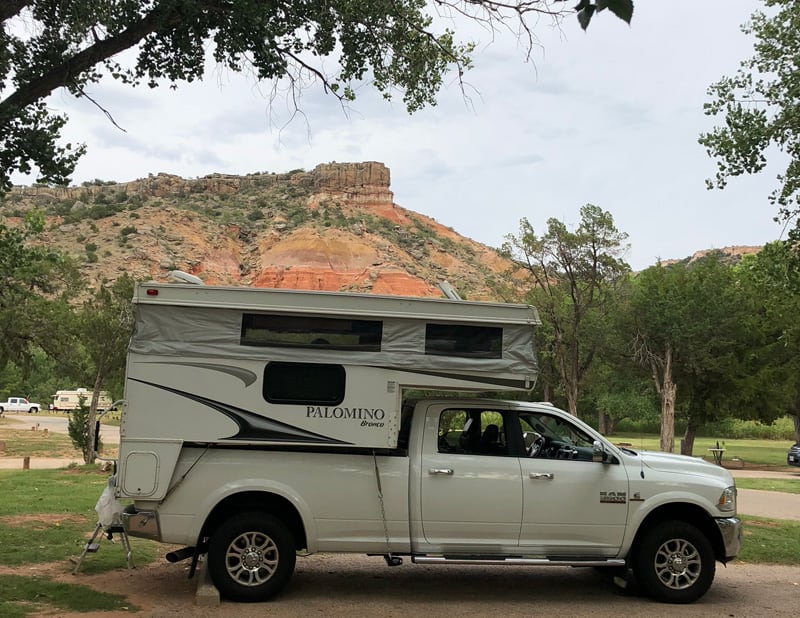 Every year we drive from Iowa to meet my dad who lives in Las Vegas. We meet somewhere in the middle. This summer we met him in Colorado. When we drove home, we decided to drive south through New Mexico and Texas. The second largest canyon in the United States is just outside of Amarillo, Texas.

It was beyond beautiful and camping in the canyon was one of the best memories of the trip. We ended up staying an extra day, hiking the canyon and learning the history.

The kids have been to amusement parks and stayed in fancy hotels, but they constantly talk about all the places we’ve camped and traveled to in out truck camper. 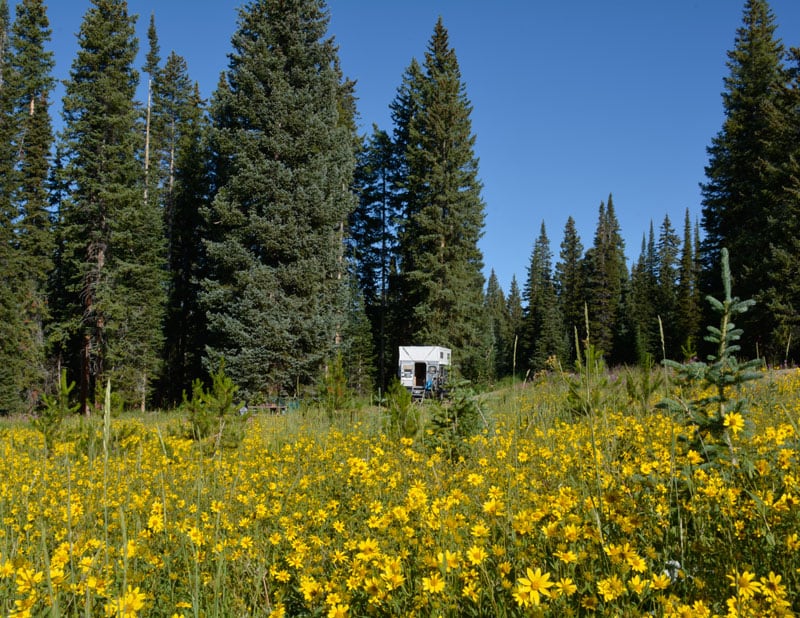 Colorado had a lot of snow this past winter and had a particularly wet spring. This led to a late and amazing wildflower season. This was taken at our campsite on Rabbit Ears Pass in August. The wildflowers were everywhere. Photos couldn’t even do them justice.

Click here to see all of the photos entered so far in the 2020 TCM Calendar Contest.