Following the ABC World News Made in America broadcast featuring the RV industry, we assembled our clips into a complete video.  Here’s what hit the cutting room floor.

Reader response during and after the airing of the ABC World News segment featuring the RV industry last evening was off the charts.  Many readers asked to see the original video we submitted to ABC World News.

Never wanting to disappoint our readers, we immediately assembled the clips into a four minute video.  Thank you for all of your feedback and support.

Thank you to ABC World News for promoting the Made In America RV industry, American jobs, and for the opportunity to contribute to your national broadcast.

Click for the behind the scenes of making this video and working with ABC World News. 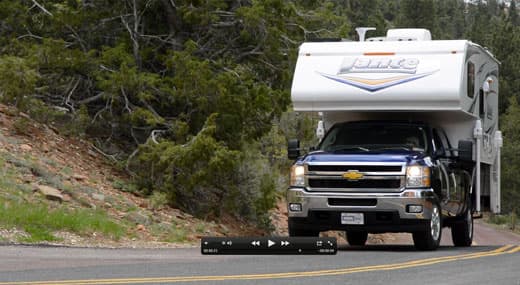 For those of you who are interested in video production, here are some technical notes on how we shot the video for ABC World News.

The driving shots were all done with a Canon HFS100 and Manfrotto fluid head tripod.  This has been my go-to video rig for the past three years.

The time lapse of us driving through Zion was done with a GoPro Hero mounted to the hood of our 2013 Chevy Silverado 3500.  The resulting images were stitched into time lapse video with Time Lapse Assembler 1.5.2.

The Zion scenery, interior camper tour, truck and camper loading, and Made In America intro were shot with a brand new Nikon D5200, Nikon 16-85mm AF-S DX lens, and a Rode Videomic.

Once the Canon files were transcoded, we were able to watch the .MOV files on our MacBook Pros using QuickTime 10.0.  This was as easy as opening the video files and clicking the play button.

I have owned and worked with the Canon HFS100 and GoPro Hero2 on many video projects so those familiar products worked well.  That said, there were two challenges to shooting video with the Nikon D5200; setting exposure, and audio levels.

Before we started shooting with the Nikon, I purchased a 67mm Sunpak ND8 neutral density filter at a local camera store.  We would be shooting a lot of video during full desert sun and I needed a strong neutral density filter to knock down the light.  Even setting the camera at ISO100 and f/22, several scenes in the video would have been impossible without the ND8.

The main issue with the Nikon D5200 is setting the aperture.  Put simply, you can’t set the aperture in Live View video mode.  While many electrons have been spilled about this topic on DSLR video production websites and forums, I got quite used to quickly switching in and out Live View to change aperture.  Is it a pain?  Yes, but the resulting video quality (especially for an $800 camera) is well worth the effort.  You can also get around this by using older Nikon lenses with manual aperture.

Connecting the Videomic to the D5200 is a snap with the Nikon’s built in 1/8” microphone input jack, but getting the audio levels right was tricky.  I had foolishly hoped that the Nikon’s, “Auto Sensitivity” would work, but it distorted.

The answer was to test and set the microphone sensitivity in the Nikon menu for almost every new camera position.  The Nikon D5200 has a nice VU meter in the monitor while in Live View which helped, but it still took some trial and error to get the levels right.  Ideally the D5200 would have a headphone jack (like the D7100) but the articulating screen of the D5200 makes it a better camera for video.

I wouldn’t hesitate to use these three cameras; the Nikon D5200, Canon HFS100, and GoPro Hero2, on another project.  If the Nikon D5200 could silently and effectively focus on fast moving objects better (truck campers driving towards me on a road) I would shoot everything but the driving time lapse sequences with that camera.  For stills and video, the Nikon D5200 is incredible.