To explain the tank size decisions Adventurer made for the 80RB, Greg explained, “…we were focused on the half-ton market for the 80RB and needed to keep the holding tank weights in check.  The 80RB has the same size tanks as the 80GS, another very popular model for Adventurer.”

There’s no way to sugar coat the relatively limited holding tanks in the Adventurer 80RB; 11 gallons fresh (15 with full water heater), 6 gallons grey, and 7 gallons black.  For couples who know how to conserve water use, this is probably enough holding tank capacity for 3-4 days.  If you require anything more than a one minute Navy shower, it may only be two days. 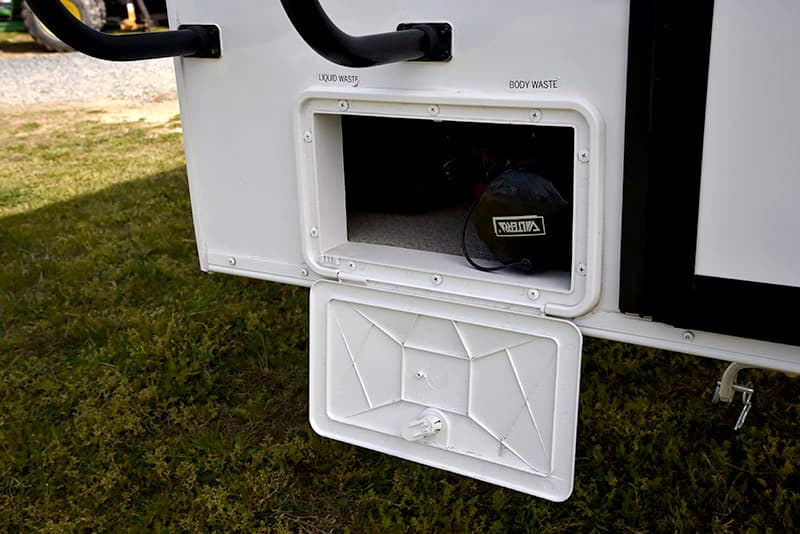 Above: The dump valves in the 80RB are on the driver’s side rear of the camper

For the full hook-up campers among us, the tank limitations are nearly meaningless.  Connected to city water and dump, you can use all the fresh, grey, and black water you need.  The small holding tanks would be sufficient when traveling from hook-up site to hook-up site, and the occasional off-grid overnight.

If you drink bottled water, bird bath, and pee behind trees, you could stretch these tanks to a week, or more.  This recalls a now infamous Question of the Week titled, “Boondock ‘Till You Stink”.  Boondock stinkers, you know who you are.

The four gallon water heater is two gallons shy of what we see in most campers, but I don’t see that as a limitation.  It may be too much information, and mentally paralyzing for those with a visually oriented imagination, but I have taken hundreds of showers in truck campers over the past decade.  In none of those experiences have I ever run out of hot water, including extended back-to-back showers while connected to full hook-ups. 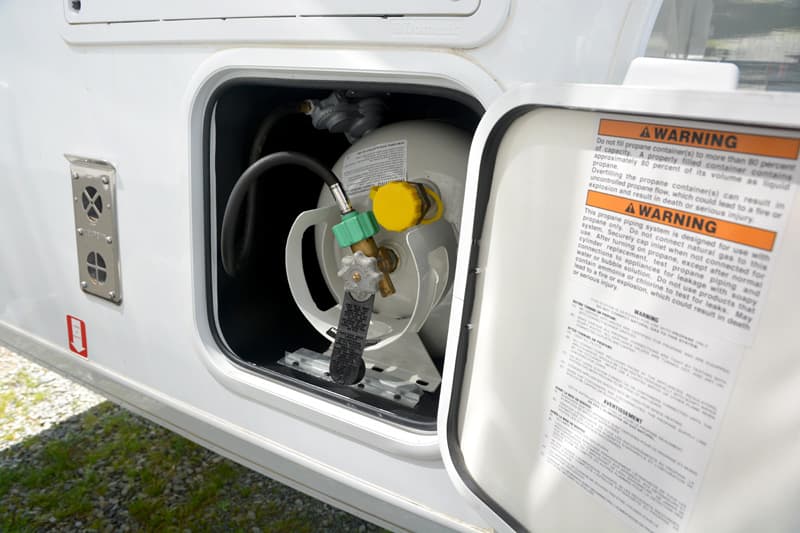 Above: The Adventurer 80RB has one 20-pound horizontal propane tank on the passenger’s side

To save weight, the Adventurer 80RB has one 20-pound horizontal propane tank.  This would take some getting used to for us as we always refill our propane tanks when one tank has run dry, and we’re about a week into the next.  Having one tank means you need to keep mental tabs on your propane use, and refill before the furnace and refrigerator go out at 2:15am on a cold Sunday night in the middle of bloody nowhere (not that that’s ever happened to us).

Further complicating this challenge is the fact that the 20-pound propane tank is horizontal, not the more common vertical type.  This means you cannot exchange the tank like you can for a vertical cylinder, but will rather need to fill propane filling stations.  We have 20-pound horizontal propane tanks in our camper and are quite accustomed to finding propane stations, but it’s certainly something to be aware of. 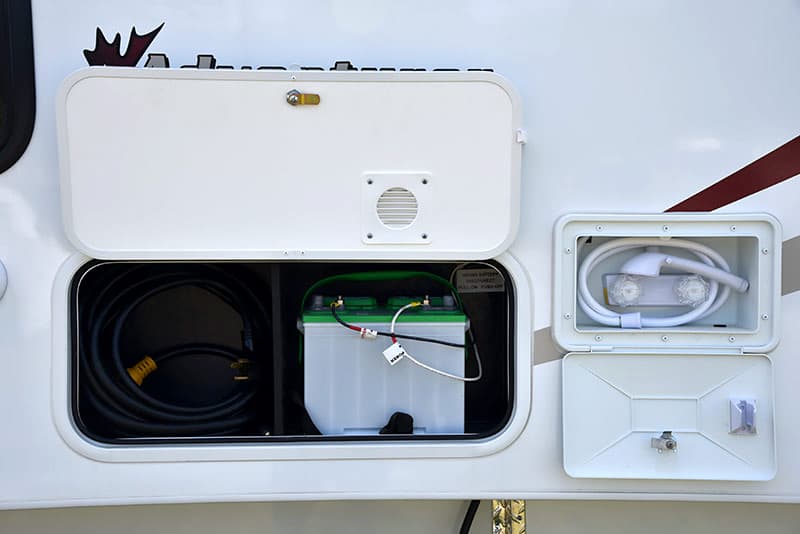 Above: A single Group 24 battery in the 80RB

The single battery gives me pause.  Even with the incredible 10-to-1 efficiency offered by the 80RB’s all-LED interior lighting, there’s still a long list of 12-volt thirsty equipment in this unit.  While the 12-volt stereo, television, and detectors are a minimal draw, the furnace fan, water pump, jacks, and fans (when left running) can drink a single battery dry if you’re not careful.

If we purchased an Adventurer 80RB, I would get the biggest and best AGM battery that would fit, and a 100-watt or better solar system.  Then I would start looking for another place to store a 12-volt battery.  As an example, Torklift International’s Hidden Power could be the perfect solution.

Again, the full-hookup crowd can ignore these warnings.  When we’re on full hook-ups, we use a portable electric heater to save propane, and an electric hot water heater element (highly recommended).  Plugged into 15 or 30-amp electric, the single battery obviously doesn’t matter either.