Listen up truck camper manufacturers and dealers! These television poll results point our several critical disconnects between what’s being offered and what customers want.

This week we polled Truck Camper Magazine readers about whether or not the truck camper manufacturers should install televisions and television antennas – and about their television and show watching habits.

The response was stunning in several ways. First, we had nearly 1,000 people take the poll (957 to be precise). By the time you read this, the poll will be over that threshold. 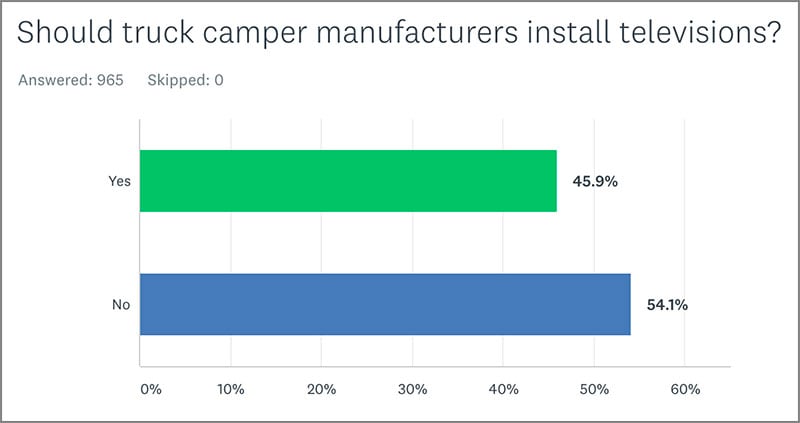 Right off the bat, 54.1-percent state that truck camper manufacturers should not install televisions. 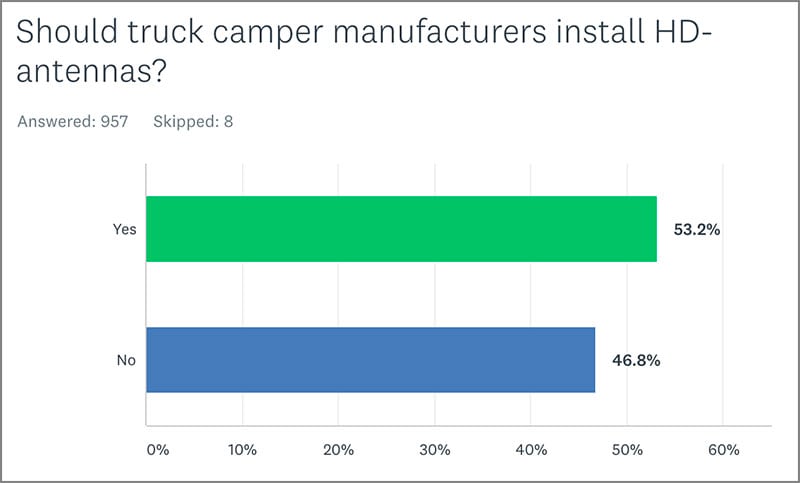 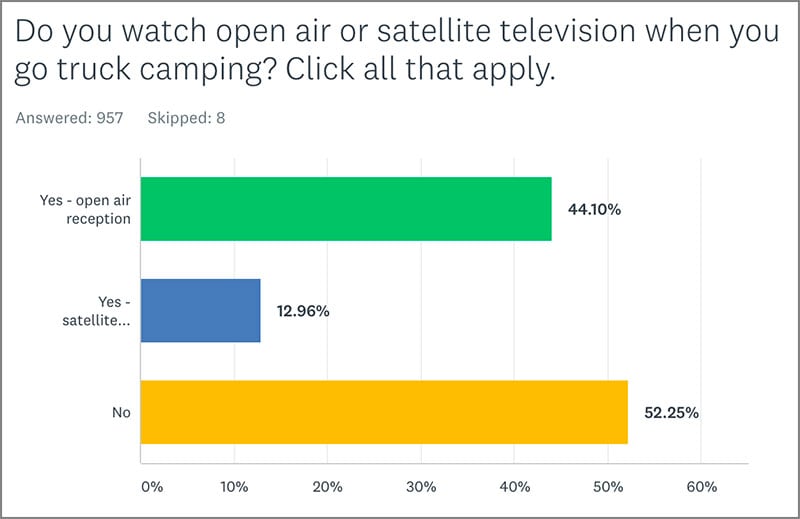 Over 52-percent do not watch open air or satellite television. Attention truck camper industry; over half of your customers do not want a television in their truck campers. This fact has huge and important implications for truck camper design, manufacturing and retail. 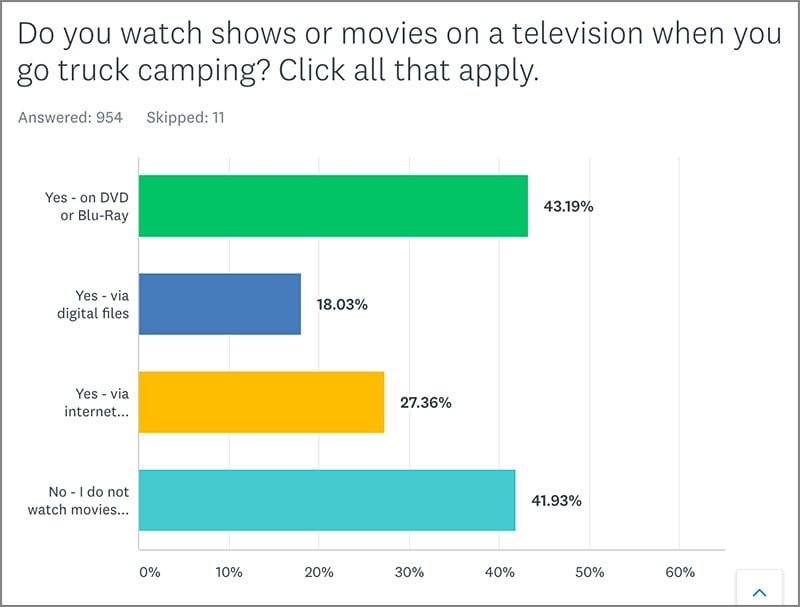 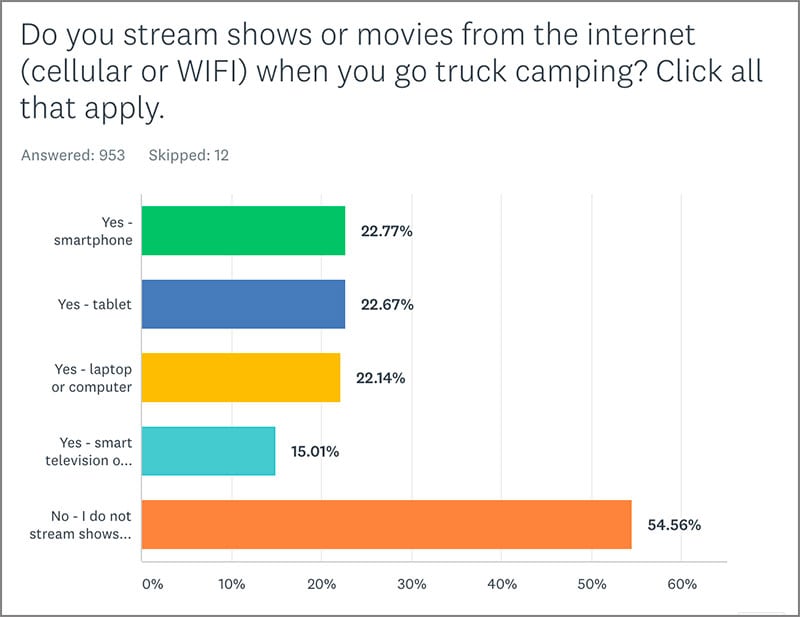 While over 54-percent of respondents do not stream shows or movies while truck camping, we were still very interested to see the number who do.

Since this was a ‘click all that reply’ answer, it’s likely that the 22-percent that answered yes for streaming on smartphones, tablets, and laptops are the same group. Still, it’s important for the industry to note that more than 20-percent of their customers are watching streaming content in their truck campers. 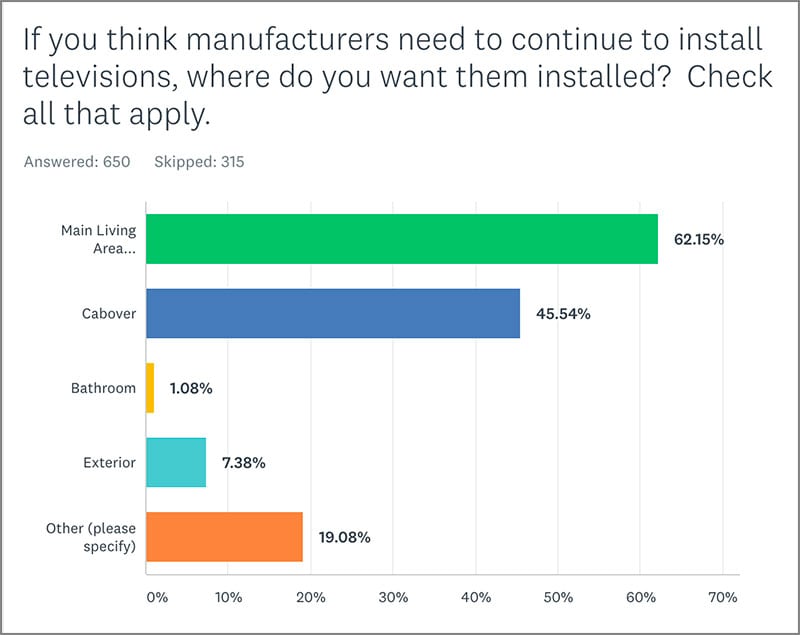 This last question was about where televisions should be installed.

On a lighter note, over 1-percent of Truck Camper Magazine readers would like a television in the bathroom. Yeah, that just happened.

The response to this survey strongly resembles the written responses to our recent Question of the Week on stereo systems, “Should stereo systems be built-in?”

The overwhelming answer to that question was no, truck camper stereo systems should only be an option, and that option should be of higher quality, more portable.

The television survey is more evenly split. About 50-percent of the responses want a built-in television, and 50-percent do not. As previously stated, this means the industry should not install televisions at the factory level (unless special ordered by a customer with one) and should make televisions a dealer-installed option only. For many manufacturers and dealers, this is already the standard practice.

The other important take away for the industry is to come to grips with the changing technology and media habits of your customers. The 50-percent who still want a television want smart televisions with built-in streaming and screen mirroring technology. Those who don’t want televisions really do not want to see a television in the units.

On that final point, many stated that they go truck camping to get away from technology and the noise that’s on television. Some were quite vocal in their disgust about the very idea of a television in their truck camper. The concept that showcasing a television in a camper might be turning off some potential customers is something many in the industry probably haven’t considered.