We got more, “Well, duh!” responses to this week’s Question of the Week than any question in recent memory.  Seriously, we may as well asked if truck campers go in the woods.

If you’ve been looking for a sign of where to go truck camping, here are a couple dozen.  Why do truck campers cross the road?  Evidently, to get next to the next sign.

This week’s Question of the Week was, “Do you photograph your rig with signs?” 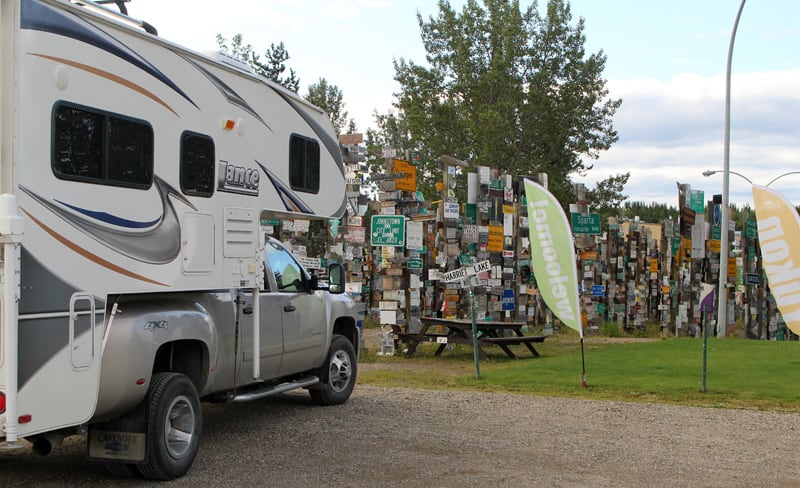 “Why take a picture of your rig with just one sign?  Why not with thousands?  The Sign Post Forest in Watson Lake, Yukon Territory has 77,000 signs and growing.  This picture was taken in July of 2014. 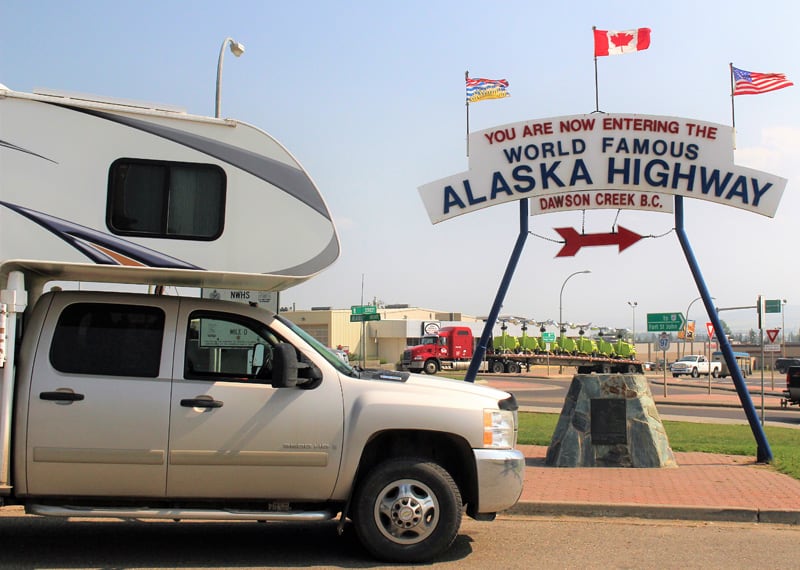 The above picture was in front of the start of the Alaska Highway sign in Dawson Creek.  It is probably one of the most photographed signs with campers and RVs.” – Eldon Rhodes, 2008 Chevy 3500, 2011 Lance 1050 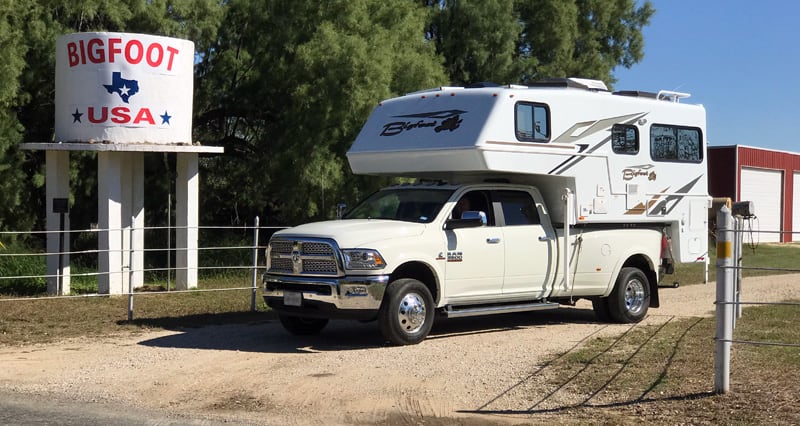 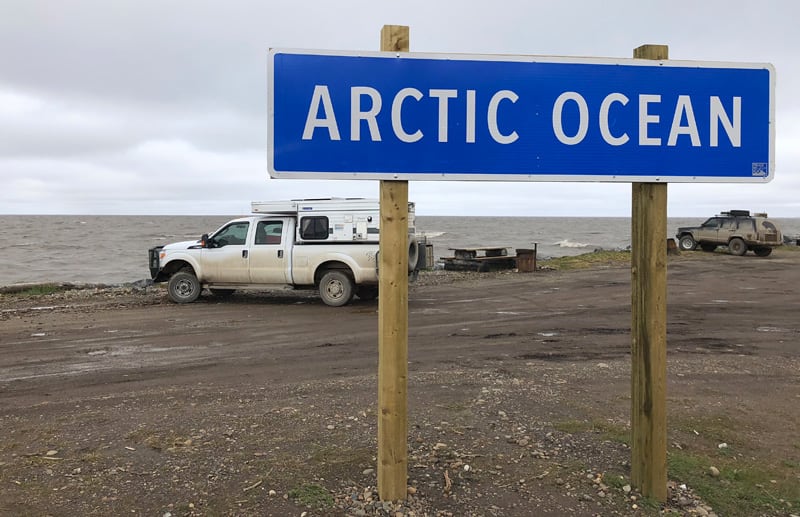 “Sometimes you just can’t not take a picture.  A very pleasant Inuit working in a recently built kiosk on the shore of the Arctic Ocean explained that a sign was needed to show the many new arrivals to Tuktoyaktuk where the ocean was located.  He seemed genuinely amazed that anyone wouldn’t know where to find it.” – Bill Tonner, 2016 Ford F-250, 2016 Four Wheel Camper Hawk 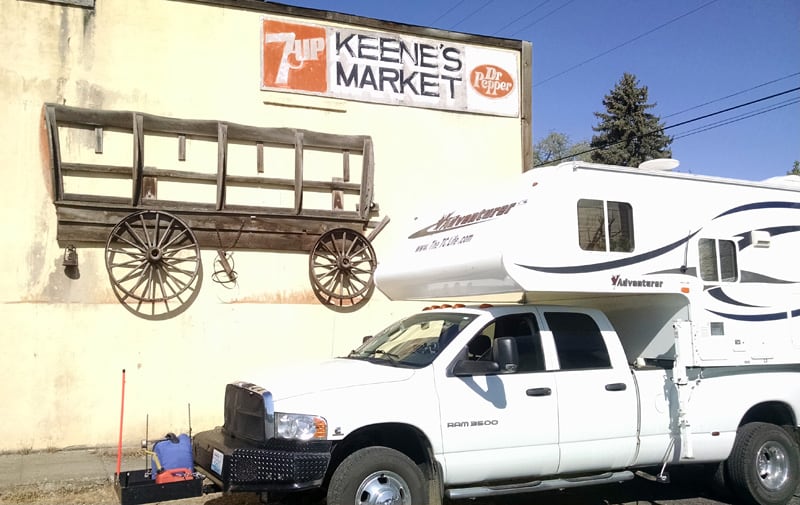 “Yes, doesn’t everyone?  I can’t be the only truck camper owner out there who has to park the rig in the correct spot so that I can get the angle I want to capture a picture.  My wife doesn’t even roll her eyes anymore since it is now a normal thing.” – Rich Bain, 2004 Dodge 3500, 2010 Adventurer 810WS 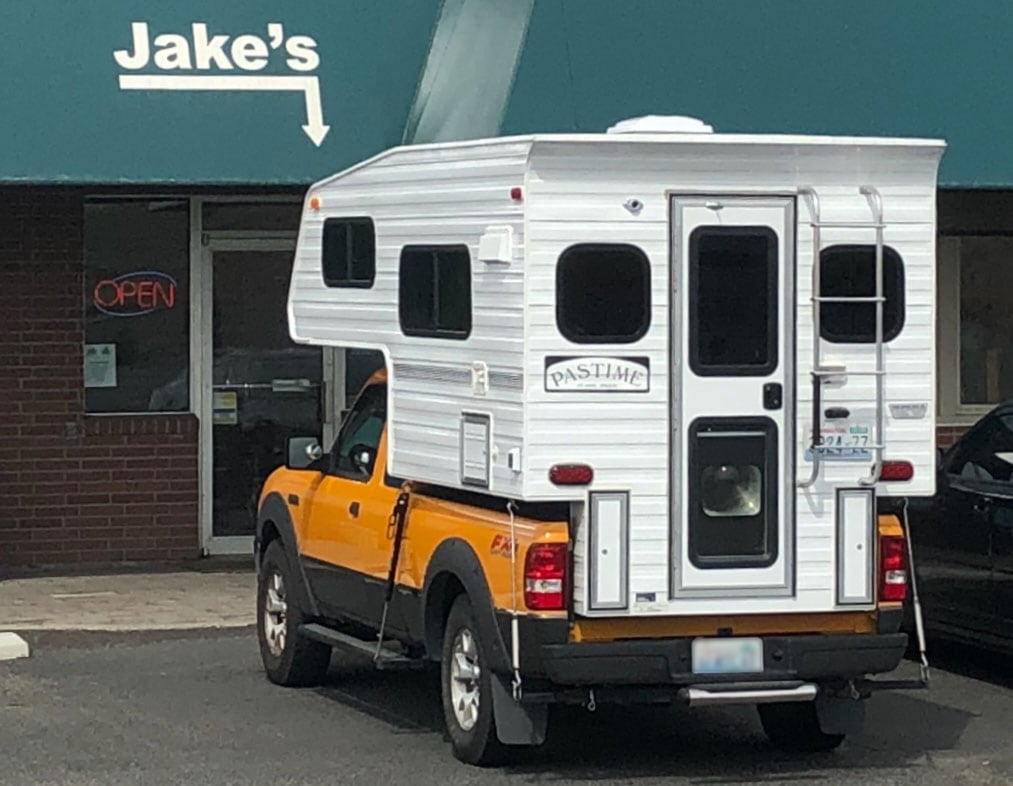 “Yes, we love the we were here aspect of taking a picture of our rig/us with identifying signs.  Keep up the good work on TCM!” – Jake and Denise Schultz, 2008 Ford Ranger, 2016 Pastime 700FDS 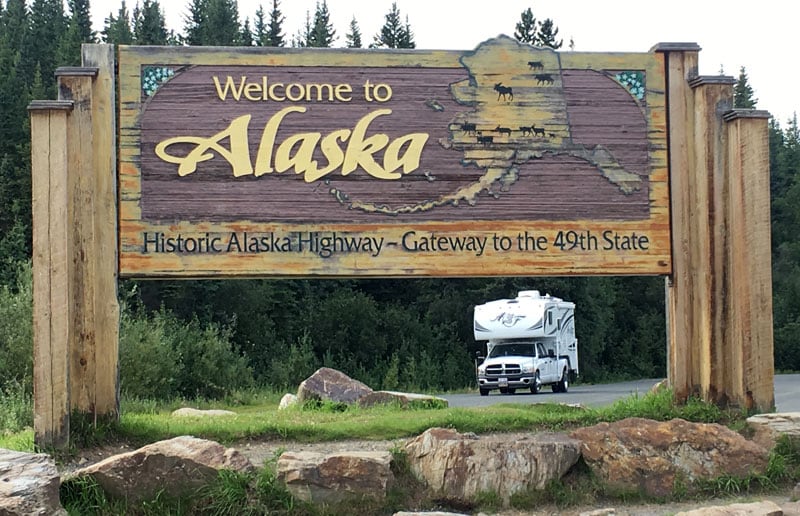 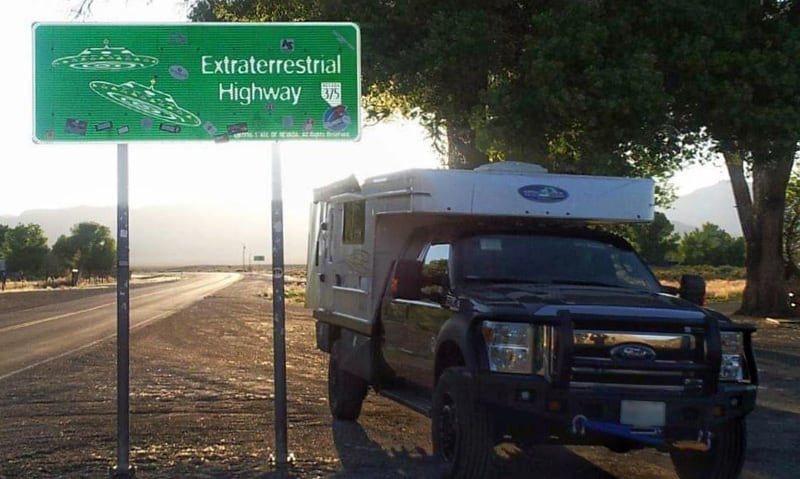 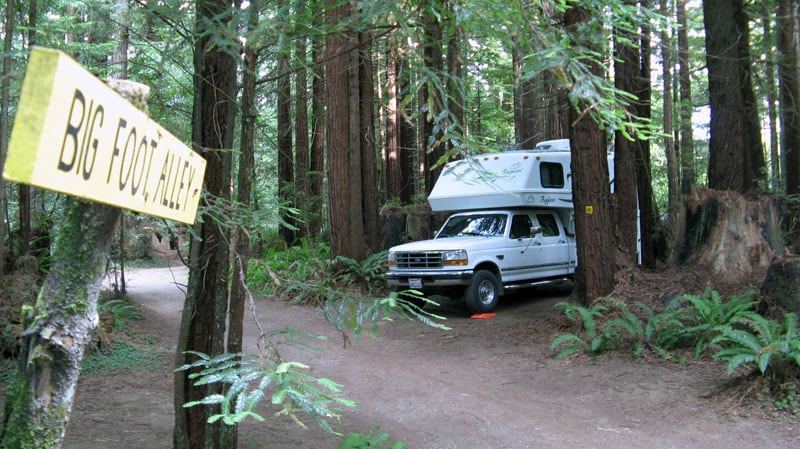 “I think photographing with signs is a popular pastime with RVers.  One reason we do it is to document where we’ve been in the camper.  Another is because we happen to run across signs that coincide with the brand of our camper.

This picture was taken at the Crescent City KOA RV Park nestled in the Redwoods of Northern California.” – John and Grete Stageberg, 1996 Ford F250, 2002 Bigfoot 25C8.11 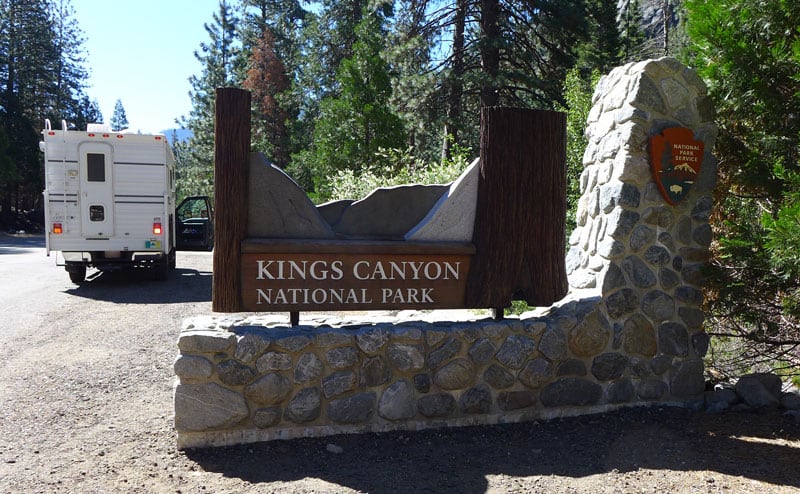 “I have taken approximately 8,000 to 10,000 pictures (not including deletions and doubles) on our last three cross-country trips.  I have one, and only one, of a sign with our camper that indicates where we were located.  I think I have found a new hobby that doesn’t include counting dead armadillos.” – Richard O’Connell, 2016 Ford F-250, 2009 Northstar Freedom 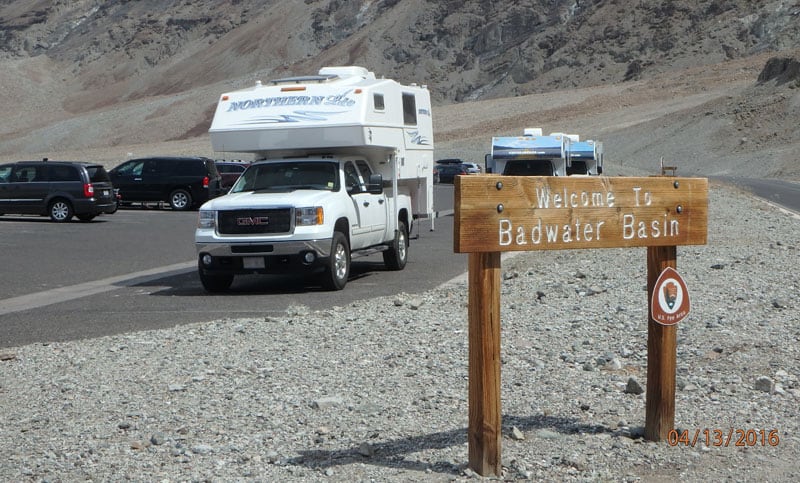 “I frequently photograph my rig with signs.  It’s a nice way to document memorable places I’ve traveled with my truck camper.

I’ve attached a photo I took at Silver Islet, which is at the southern tip of the Sibley Peninsula on Lake Superior in northwest Ontario.” – Roger Garner, 2014 Ram 1500, 2017 Northstar Vista 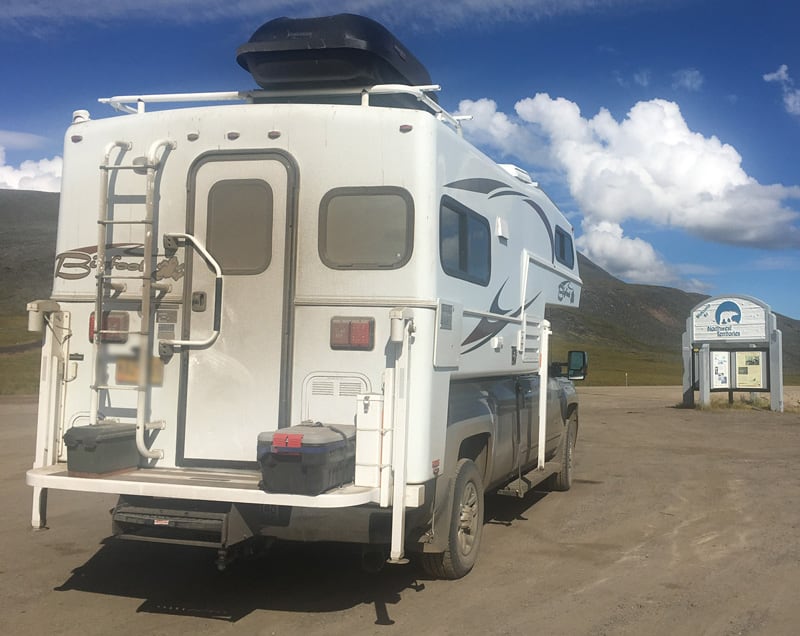 “Whenever we can.  This particular shot was taken entering the Northwest Territories on the Dempster Highway.  It is over 400 miles of gravel road to the small community of Inuvik.” – Mark Motsko, 2016 Silverado 3500, 2016 Bigfoot 1500 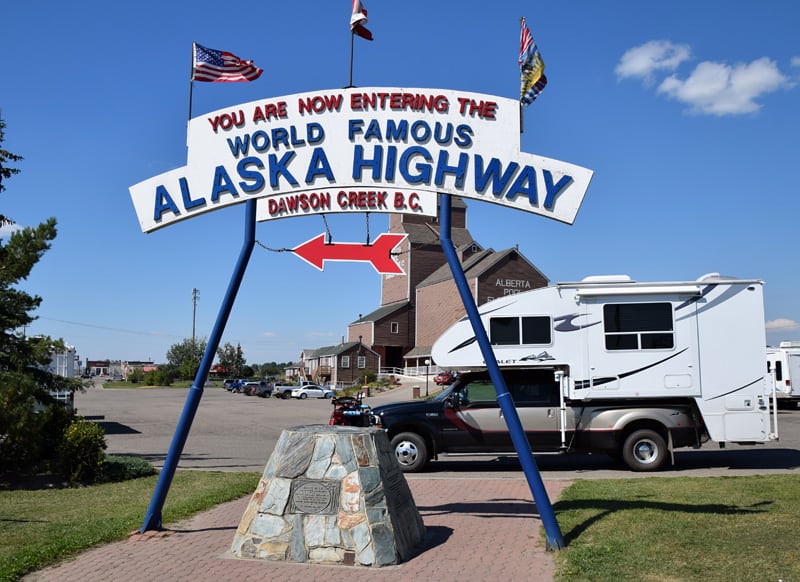 “This picture was taken on our Alaska Tour in Dawson Creek, British Columbia, which is where the Alaska Highway starts.

I’ve also included a picture at Burwash Landing in British Columbia on our Alaska Tour.   It is home of the largest gold pan in the world!” – Charles Coushaine, 2001 Ford F350, 2012 Chalet DS116RB 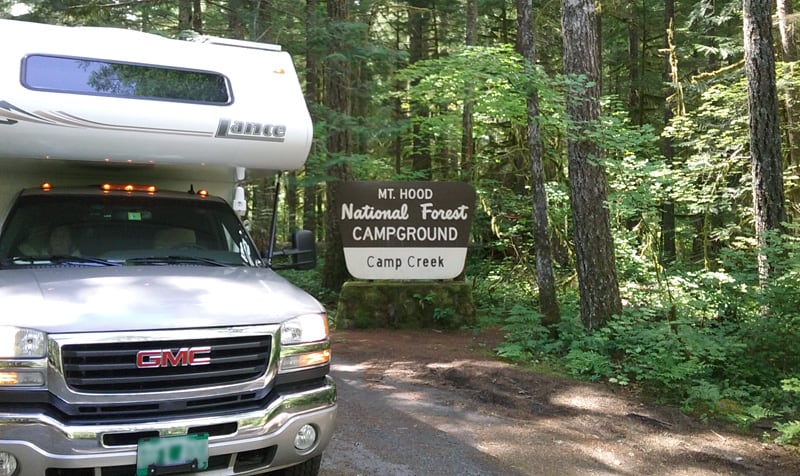 “Yes, we have most likely a couple of hundred sign photos with our rig in them.  I’m submitting two photos.  It shows two different faces of the same sign that is on the boundary of Shoshone National Forest and U.S. Custer National Forest on the Beartooth Highway. 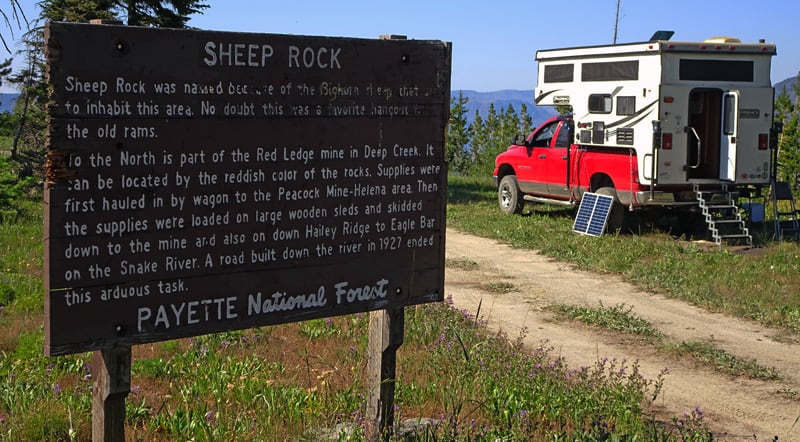 “Most of our camping is boondocking off the beaten path, so there are often no signs.  When there is we try to photograph it with our camper to show people where we have been or camped.” – Brian and Chris Hagen, 2004 Dodge Ram 2500, 2014 Palomino Backpack SS-1251 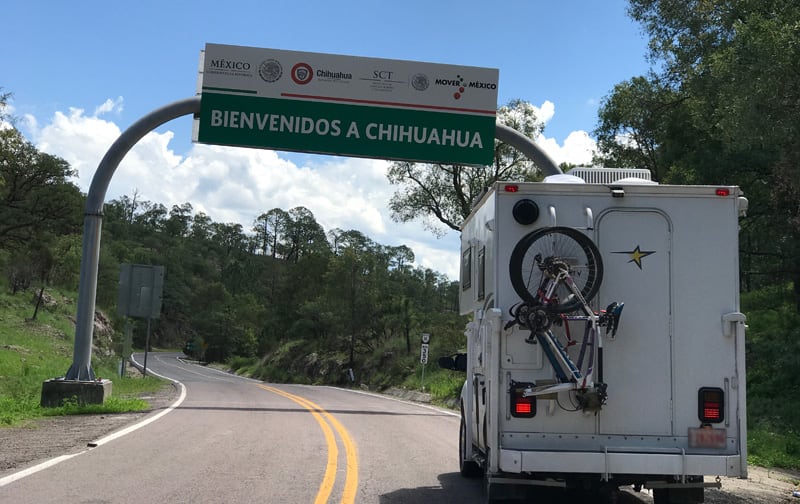 “Sometimes we take photos with signs, but not that often.

These photos are from our trip from Costa Rica to Cedar Falls, Iowa to visit the Northstar factory.” – Alex and Vianney Sales, 2015 Ford Ranger, 2017 Northstar 600 ATV 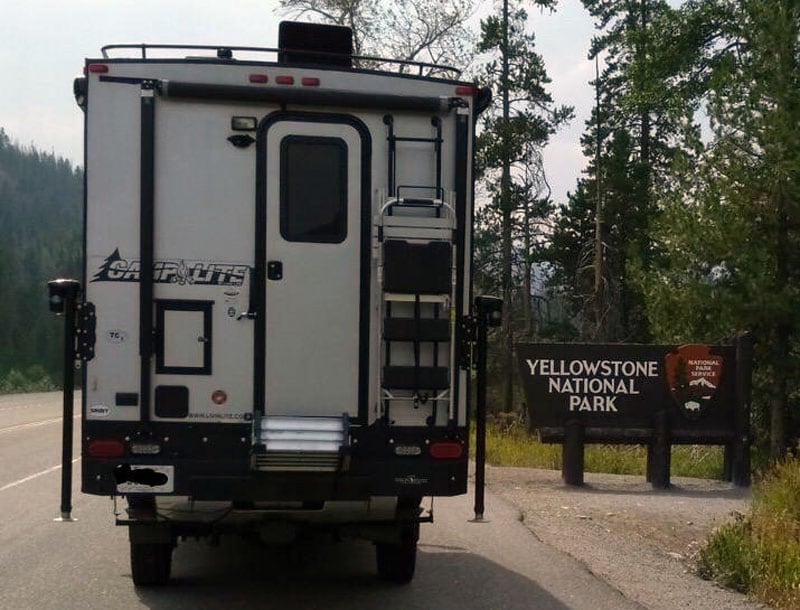 “For years we have taken pictures as a way to remind us of where we have been.  The attached picture is a great example – Camp Tuffit!  For us this sign was a bit ironic.  As after camping in a tent for 20-plus years, getting our Arctic Fox is far from ‘tuffing’ it!” – Rick Roeder, 2003 Dodge Ram, 2014 Arctic Fox 990 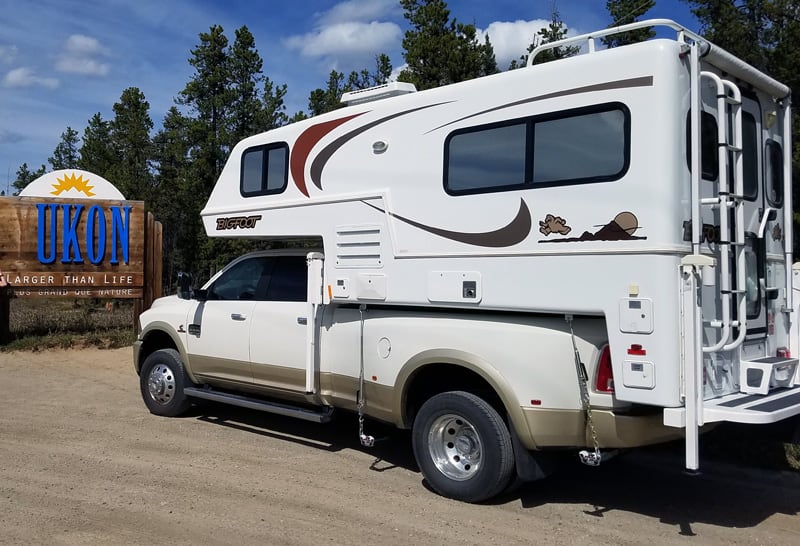 “We like to take pictures with signs. It is perfect to remember the place or the road we traveled on. 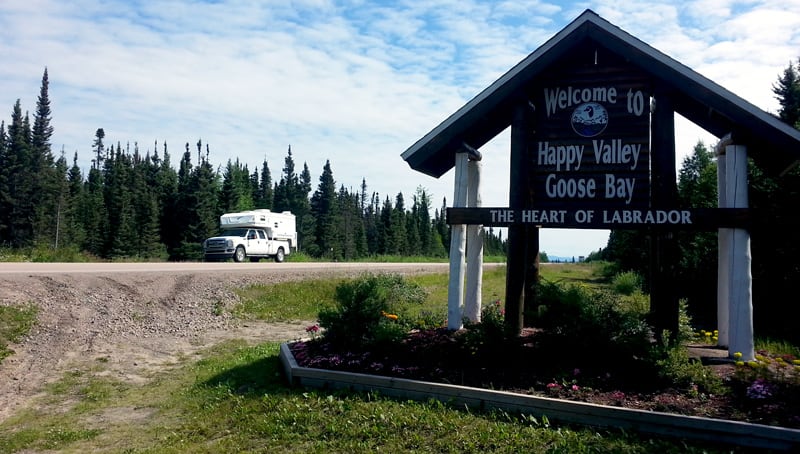 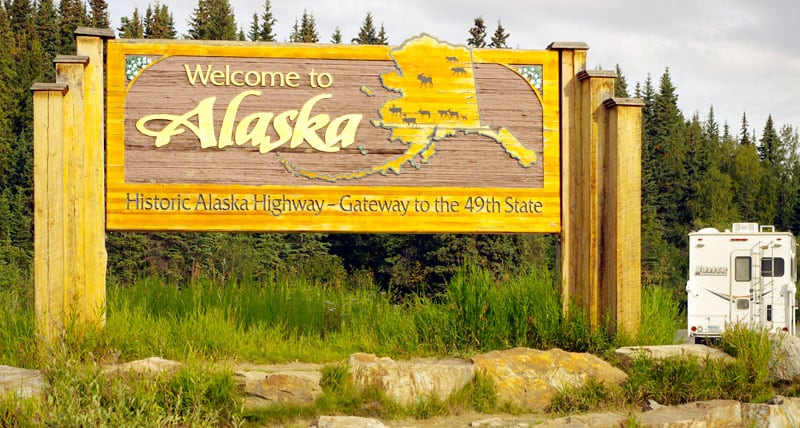 “Of course I use my camper parked near signs for photos.  I learned long ago to include signs in travel photos.  They serve as an aid to keep my 35mm slides organized.  Now, with digital photos, the sign makes more sense than the file description.” – Philip Tron, 2009 Chevy 3500, 2012 Lance 1050 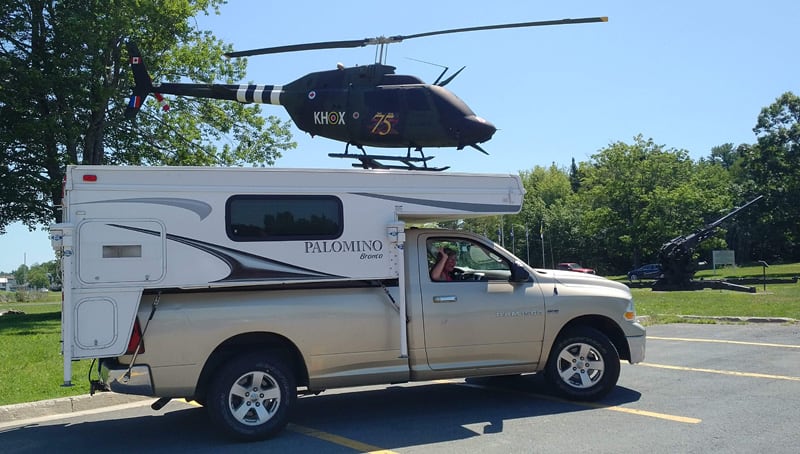 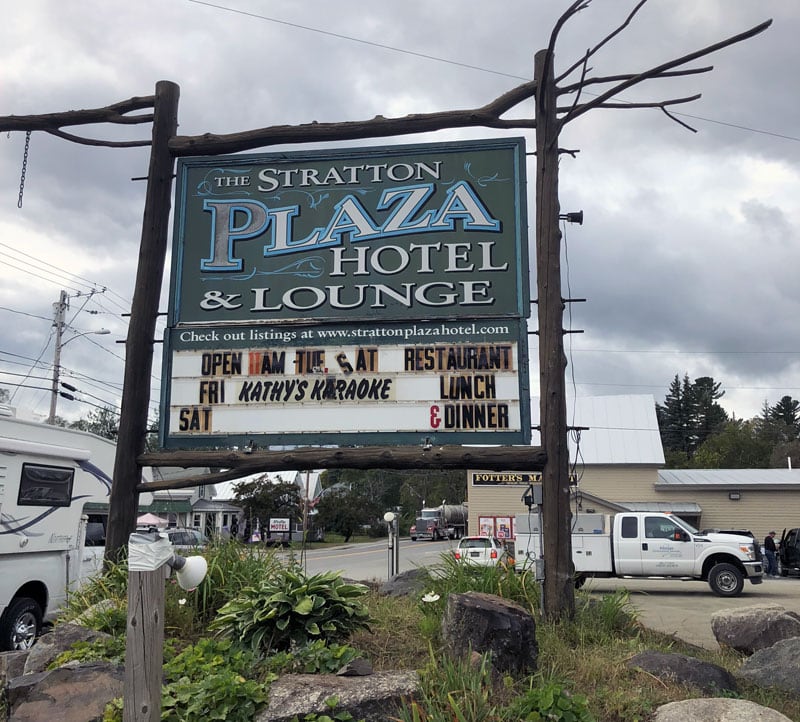 “I photograph signs to denote our travels.  Sometimes our rig is included.  We were in the western mountains of Maine four wheeling this summer.  We went through this quaint town. It was an interesting lunch spot.” – Carmen Haggerty, 2018 Ram 3500, 2013 Northstar Adventurer 8.5