Response to this week’s Arctic Fox Air Time caption contest was unbelievable, and truly laugh out loud funny.  Truck campers might not be the largest part of the RV marketplace, but we clearly have the best sense of humor.

With well over 200 entries, it was nearly impossible to pick a winner.  It really came down to which caption made us laugh the most.  We realize that’s not exactly science, but funny always wins here at Truck Camper Magazine.  The winning caption made me laugh, Angela laugh, and Harley roll over and go back to sleep.  That’s enough for us. 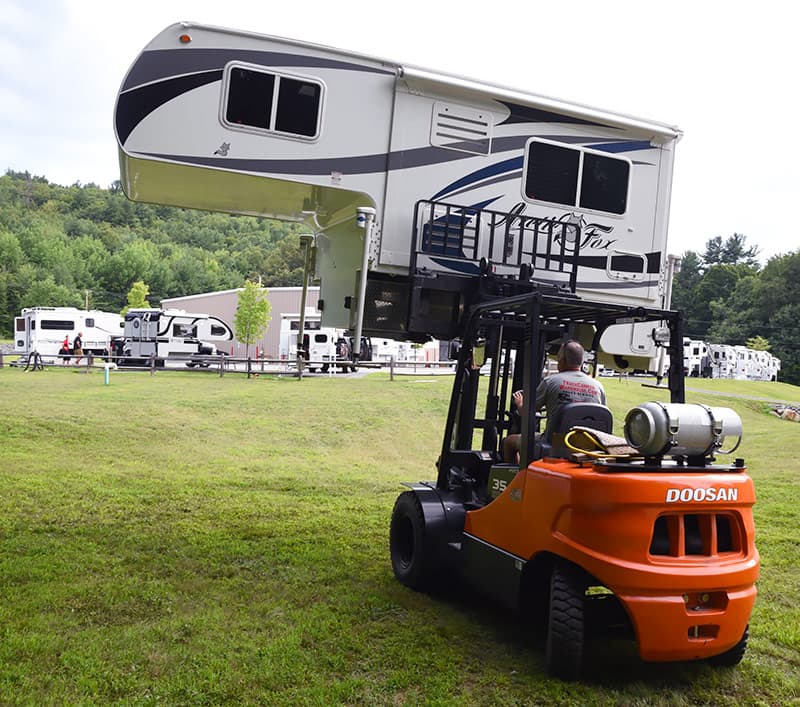 And the winner is…

“If this truck camper escapes one more time, I’m not bringing it back Gordy!” – Rickey Werner

Congratulations Rickey!  You won a Truck Camper Magazine T-Shirt of your choosing.

Thank you to everyone who participated in our caption contest.  We’ll have to do this again next time we capture a funny moment.  Knowing this community, that won’t take long.

Here are our honorable mentions.  Please don’t drink coffee as you read these!

“Now just where was that truck?” – Anne Brown

“The Doosan-Dont’s of camping.” – Mark McCracken

“Do you have WIFI now?” – Pat Patterson

“Easy to park, but I only get two miles to the gallon.” – Bill Spath

“I told you not to park there!” – Dale Koehler

“Bob’s wife was not impressed with the new hydraulic lift system for the camper.” – Greg Sellers

“If you can’t play nice with the other campers, you have to go into time out.” – Cindi Goodrich

“They repossessed the pickup, but the forklift is paid for. What site am I in?” – Tom Julkowski

“Gotta move this last year model, I wonder if anyone will notice if I just drop this in the next truck that comes in?” – John Macias

“This will teach the kids to sleep in!” – Jim McIrvin

“And this is your view sitting atop your lifted truck.” – Nela Skul

“We used to tip our tent to sweep it out.  Old habits die hard…” – Steve Kernik

“NASA Control to all staff, prepare for launch.” – Ron Berry

“That’s not what I meant when I said it was a pop-up!” – Bill Rosso

“Now if I can just raise it up slightly, give it a little tilt, and shake it just a bit, I’ll get the last remaining drops of water out of the tanks, and we’ll call it winterized!” – Roger Odahl

“This ought to keep those pesky Northwood employees from sitting on the roof.” – Gregory Himes

“Wait, wait my loan payment check is in the mail!” – Ralph Goff (aka Ramblin’ Ralph)

“Wow!  I cannot believe those newbies just drove off without the new camper.  I am sure they will be back soon enough.” – Doug Colfer

“I don’t care that my truck is being fixed.  I’m going camping in my Arctic Fox.” – William Chase

“What happens when you miss a second payment!” – Mick McDevitt

“And this little piggy went to market…” – Linda Norman

“Day 16: I am still living amongst the herd.  The camper is aiding in my illusion that I am truck and not in fact a forklift.” – Ashley Canavan

“Doosan announces new LPG powered off-road alternative to using a truck to carry your truck camper.  This new versatile package allows you to navigate to places that a normal truck camper rig can not.  Additionally, since your truck camper and your forklift run on the same fuel you can save the hassle of stopping at the gas station.  Doosan’s torque and versatility is unparalleled.  On top of that, you have the ability to level your truck camper without resorting to the archaic method of using a wireless remote jack controller.  From the driver’s seat you can level your truck camper before it even touches the ground.  While highway speeds may be slower than you are accustomed to, the open-air feel of transporting your truck camper will reach a new level of freedom.  Finally, tie-downs are now a thing of the past with your new Doosan Truck Camper rig.  Call Truck Camper Warehouse now to schedule a test drive.” – Mark Joslin

And the funny keeps going…

“The ultimate high-lift kit, but that first step…” – Terry Smith

“Is there an extension ladder in the options list?” – Mark McVicker

“Well, you said you wanted to be upwardly mobile.” – Sue and Don Graf

“I have a few: 1. HIJACKED!  2. When traveling, be wary of forklifts!  3. What all truck camping folks need. Never have an issue loading or unloading again!” – Angie Brown

“Anywhere!  You want it there – I can do that!” – Connie Koehler

“Hold my beer, and watch this.” – Tom Elliott

“The latest innovation in the truck camper industry!  No truck?  No problem.” – Janet Joki

“I finally found the Arctic Fox of my dreams, and they even loaned me the forklift to get it home!  I just hope this will finally convince my wife we need a truck…” – Michael Hendersond

“Up, up and awayyyyyyy.” – Chuck Currie

“My plan is finally coming together…” – Mark Hendircks

“Where do you want this Mrs. Howell?  Over there, Gilligan.” – W. Banes

“1. Don’t those Boondockers know they need a truck for this?
2. Sorry Fox, but we’ll have to place you here on timeout until you can play nice with the other campers.
3. Arctic Fox Ultralight; where the truck is optional.
4. Time for the off-road drop test…
5. This new ‘order online, and drive thru’ shopping should revolutionize the industry!” – John Macias

“Back the truck under Gomer!” – Denver Woods

“So… now for the crash test we do!” – Mark Urscheler

“And we’re moving on uuuuuup; to theee top; to a deeeeeluxe apartment, in the skyyyyyyy!” – Brett Shuman

“Dear, I still think it would be easier to move the truck and camper together to our camp site.” – William Hrubetz

“Houston, we have a problem.” – Robert Cabral

“1. For those who have TC’s on lifted trucks, Doosan introduces the EZ-Lift camper mounting system.”

“2. Moments later, Frank the forklift driver regretted not moving that small pebble fin front of the tires as he was moving this camper forward.” – Frank Kaye

“In south Texas we call this a ‘deer blind’.” – Charles Patton

“Now, where did I park the truck!?” – Sandy Lancaster

“And you thought truck camping was just for trucks!” – Bryan Carrick

“I could of swore that my stealth truck was here.” – Beverly Chmelik

“Closer to heaven in my Arctic Fox.” – Jim Dailey

“Russell Doosan was a man who marched to the beat of a different drummer.” – Randy Brewer

“Up, up and away!” – Charlie Coushaine

“Who let the doos out!” – Roger Sharpe

“You’re doin’ fine!  Just keep going like you are, and then over there to left where my truck is parked.” – Norm Cushard

“The all-new Arctic Air!  It rides like a dream!” – Doug Lamb

“I know I should let this down lower and drive in reverse, but I have a stiff neck today.” – Fred Stanley

“Who says you need a truck to go camping?” – Audrey Ruccio

“Loading on a lifted monster truck… no problem!” – Linda Rearick

“Found it… This one must have gotten away!” – Brian Bach

“Retired and on the move!” – Laura Grondin

“It may not be fast, but it has great elevation.” – Gary Peters

“Leave me alone.  I am late for our safety meeting.” – David Fern

“The freeway speeds aren’t great, but the view is magnificent.” – Edward Gerhard

“Set that in the back of Old Man Randall’s truck and get him the heck out of here.” – George Randall

“Waiting for enough money to come in for my truck.” – Larry T. Bowman

“Pie in the sky!” – Barbara Sutton

“The center of gravity is right about here.” – Allen Jedlicki

“Maybe a real truck would be better!” – Lonnie Cross

“In hindsight, I probably should have bought a pickup like those people over there.  At least I am well under my GVWR!” says the Forklift Driver and brand new Arctic Fox owner.” – Pat Walsh

“I told you NOT to park there.” – Joe Cardinal

“The great escape.  I almost made it.” – Kim McColl

“1. They said it was a pick up camper!  2. I have heard of slide-in campers and flatbed campers, but a fork camper?” – Matt Reinker

“Think they will miss it?” – Les Hatley

“Listed as an option in the Arctic Fox Truck Camper brochure: Forklift option with instruction manual – propane not included (loading and off loading from your rig). ** Recommendation for those who have BAD (Backing Anxiety Disorder) or BDD (Backing Deficiency Disorder).“ – C. Ehrhardt

“1. Meanwhile at the GlowStep secret test facility…  2. You want a second floor condo?  We’ve got that.  3. Which way did that wascally wabbit go with my twuck?” – Bill Sprague

“Whoa there fella, no need to be so high!” – Dave Ruane

“Hold my beer and watch this!” – Caleb Sampson

“I TOLD you to stay with your siblings and not wander off!” – Steve Williams

“Don’t have a truck, but I’m going camping!” – Randall Rice

“I sure hope my new truck is delivered next week. I keep getting all these funny LOOKS when I park my camper.” – Bob Long

“Caber toss? I thought you said Camper toss.”  (The caber toss is a traditional Scottish athletic event in which competitors toss a large tapered pole called a “caber”).” – Bruce Scott

“It’s January and I really need a pick me up.” – Paul Kellagher

“Now where did I park my truck?” – Steve Venneman

“Just another road trip, watch out for potholes!” – Janine Gordon

“Hey, where is your truck?” – Eric Williams

“Did you say penthouse?” – Barbara Youngs

“Looks Mom, I gots me a deer stand.” – Russal Golding

“Turn this thing around.  I told you I wanted to go to Florida for the winter!” – Elaine Odahl

“Next year we will be introducing ‘slide-out’ wings!” – Jerry Bonneau

“My kids keep asking for a tree house.  I’ll show them how fast I can make them a tree house.” – Troy O’Rourke

“Pull through? I don’t need no stinking pull through.” – Steve Singhose

“When Mommy said, ‘Go out and play in the traffic’, she meant – on the truck!” – Tom Miner

“1. Get closer to truck camping heaven with Arctic Fox.  2. Which view do you want for breakfast, honey?” – Jamie Rea

“Well love… you said you wanted to live in a high-rise condo.” – Kevin Griffin

“Get off of my lawn! Dang truck campers!” – Geoffrey Johnson

“There is no limit to what you can do with a new toy.” – Arthur Armstrong

“1.Camping when your truck gets repossessed.  2.Who needs a truck?
3. I guess they’re serious about the no camping sign.” – Jackie Macpherson

“That perfect campsite is somewhere around here! (GO FIND YOURS)” – John Tseka

Home » Question Of The Week » Over 200 Hysterical Captions: 1 Winner